This is not really an article or a story , but rather a small “ report “ of sorts of a very thrilling hunt which I enjoyed recently .

I live on a property near the hills and my home is surrounded by 33 different farms and plantations ; all of which border the vast Maulvi Bazaar forests . I am frequently fortunate enough to get invited by my neighbors , to hunt on their private lands . Sometimes , they invite me over as a gesture of kindness . Sometimes , they are hopeful that I will share some of the game meat with them ( which I always do , anyway ) . And sometimes , they simply need someone to deal with problem animals . Animals which might either be harming the crops or the livestock or even the human inhabitants of the farms and plantations.

Day before yesterday , I was returning home from the College where I teach . I was approached by a neighbor who requested me if I could sort out a few problem animals for him ( the gentleman farms potatoes ) . I asked him what the problem was . He told me that he had about a half dozen huge wild boars recently venture into his property , which were destroying his potato crops . They had also injured four of the potato field workers who attempted to drive the wild boars out of the potato fields . Knowing that I am license holder of three arms and an avid hunter , the gentleman asked me if I could take care of the wild boars for him . Recognizing an opportunity to partake on another thrilling hunt , I readily agreed .

When I arrived at the farm , I first went to the family house where the owner and his wife were waiting for me . I told the owner two things :
a ) Not to get out of the house until I had returned .
b ) To provide me with one reliable farm employee who knew the entire lay out of the farm and who would carry one of my arms , while I had the other in my hands .

After some thought , a servant named Yasin was selected by the owner . Roughly in his late forties , Yasin knew every nook and cranny of the farm . He also knew the areas of the farm , which were most frequently ravaged by the wild boars . But most of all , the farm owner was 100 % confident that Yasin would not abandon me in a tight spot .

I asked Yasin to take me to the potato fields where the wild boars were last seen . I handed Yasin my .458 WM , while I carried my Laurona 12 bore . Yasin held a three cell torchlight in his left hand and he began to guide me through the farm . Off into the distance , we could hear the wild boars feeding . I asked Yasin exactly how many wild boars we were dealing with . Seven , was his answer . We finally neared the potato fields and then crouched down , as soon as we saw the wild boars . I told Yasin what we were going to do , as I removed four Eley Alphamax LG shells from the one of the pockets of my canvass hunting vest . I handed them to Yasin and asked him if he had ever held a gun . No , was his answer .

I explained to Yasin that we were going to close the distance between us and the wild boars . We were going to stalk them , until we were within 20 feet range . I would take the first two shots at the wild boars with my Laurona 12 bore , before opening and handing the shotgun back to Yasin while taking my .458 WM from him . While I was shooting the remaining wild boars with the .458 WM , Yasin’s duty was to reload the shotgun with two fresh Eley Alphamax LG shells and be ready to hand it back to me immediately . The plan was simple enough .

I coached Yasin on how I would open the breech of my Laurona 12 bore ( the shotgun’s automatic ejectors would naturally throw out the empty shell casings by themselves ) and hand him the shotgun . While taking the shotgun from me , he was to simultaneously put my .458 WM in my hands . Then , Yasin simply had to load two Eley Alphamax LG shells into the shotgun’s breech and close it ; staying ready to hand it to me as soon as I started gesturing him to take my .458 WM from my hands again . Yasin understood things pretty quickly , once I showed him how to load the Laurona 12 bore . Then , we commenced the stalk after switching both of our torchlights off .


Semi crouching and semi crawling , Yasin and I finally got within roughly 20 feet of the wild boars . They were far too busy feeding on the potato tubers , to even remotely imagine that someone/ something would be sneaking up on them . Putting my finger on the button of my six cell torchlight as I shouldered my Laurona 12 bore , I made a mental note of the positions of all seven of the wild boars . Leaping up , I switched on the torchlight . The beam illuminated a sounder of wild boars and took aim at the largest one which I instantly laid my eyes on .

I pulled the right trigger and the loud blast of the Laurona 12 bore shotgun echoed through the forest . I watched the concentrated charge of eight LG slugs tear into the broadside of a heavy wild boar . Instantly swinging at a 30 degree angle , I pulled the left trigger of my Laurona 12 bore just as the barrels became parallel with another extremely large wild boar . The concentrated charge of eight LG slugs caught him in the side of the head . Seeing both the wild boars dropping to the ground on the spot , I did not care to waste anymore time . Instantly opening the breech of my shotgun and handing it back to Yasin , I snatched my .458 WM back from him and flicked off the safety catch .The wild boars had gotten confused and thus , panicked . One particularly aggressive wild boar decided to charge me and Yasin . I gave him a frontal heart shot with my .458 WM . The impact of that 500 grain Nosler Partition soft nosed bullet completely raked the wild boar from stem to stern . He simply gave up and dropped dead right there . Taking aim at another fleeing wild boar , I hurriedly put another 500 grain Nosler Partition into the region right behind his shoulder. He went roughly 55 yards , before dropping . The other three wild boars were fleeing the farm as fast as their trotters could carry them . Seeing that the last three remaining wild boars were a sow and two immature animals , I decided to refrain from shooting them until and unless they returned to cause more trouble . Yasin and I stood amongst the carcasses of the four wild boars , when we decided that we should call for help from the house in order to get the carcasses inside . Yasin had properly loaded my Laurona 12 bore and was obediently standing with it ; ready to instantly pass it to me whenever I gestured that I would need it .

This morning , all of the fresh pork that was harvested from the wild boars ( which we had butchered on the previous night ) was donated and distributed to the local Catholic orphanage and the local Protestant orphanage . In the end , each and everyone of us got something out of this experience which we had wanted . My height ( the land owner ) was finally able to get rid of the wild boars which were ravaging through his potato fields . The local Christian orphan children got a great deal of fresh protein to supplement their diet , without needing to pay anything for it . As for me ? I just happened to be glad that I had enjoyed such a thrilling and exciting nocturnal hunting experience . 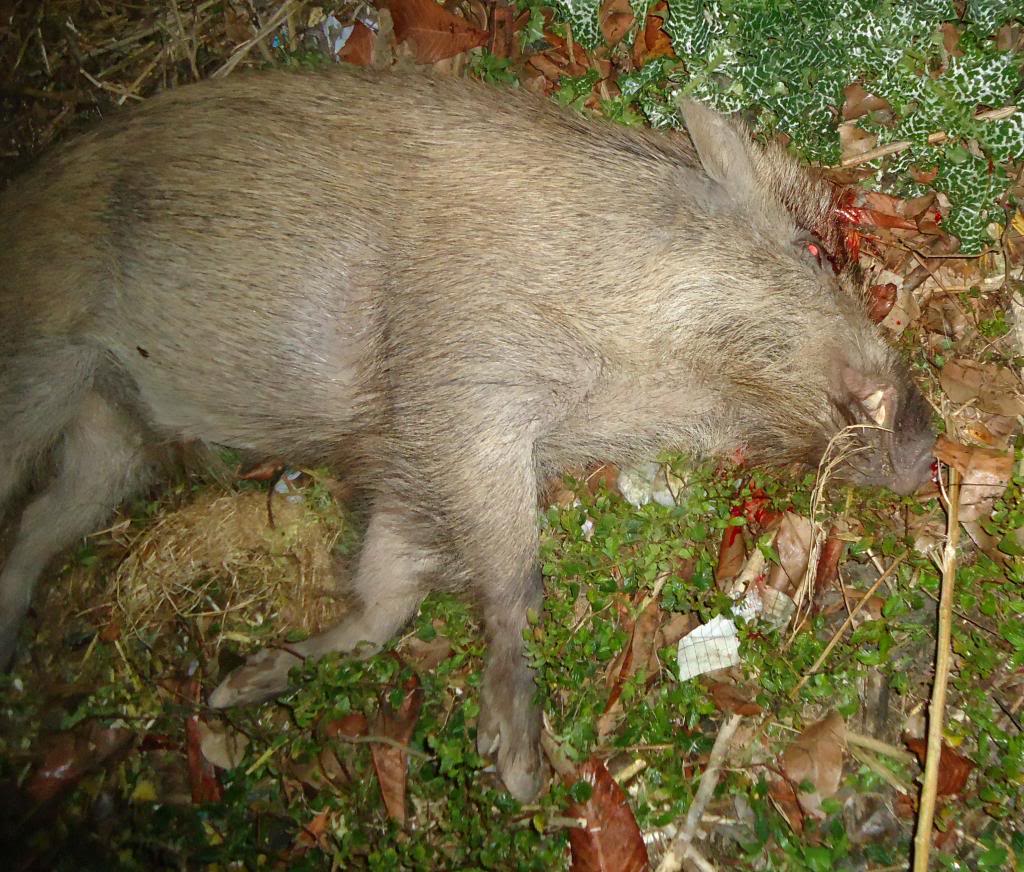 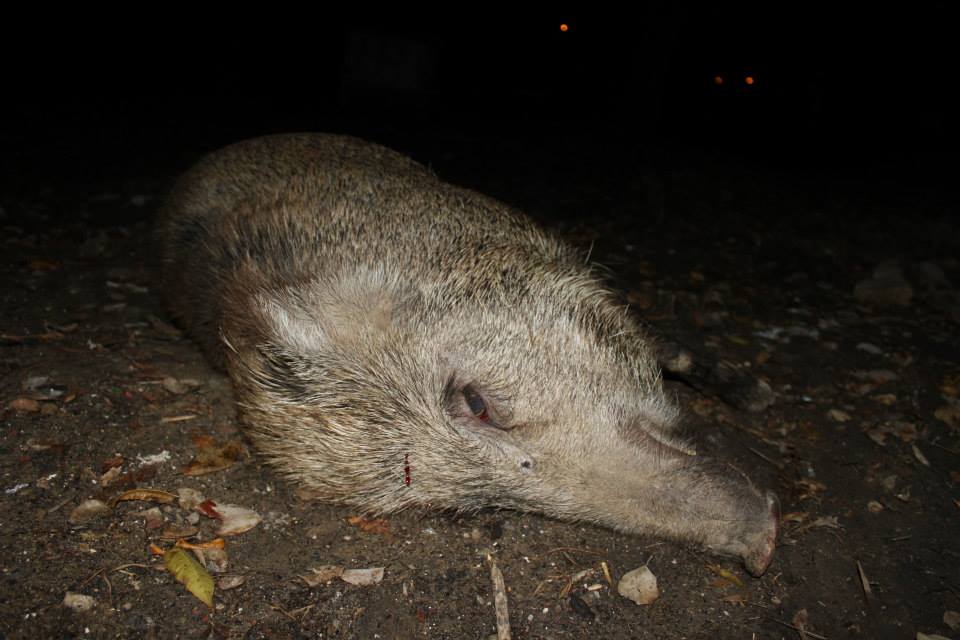 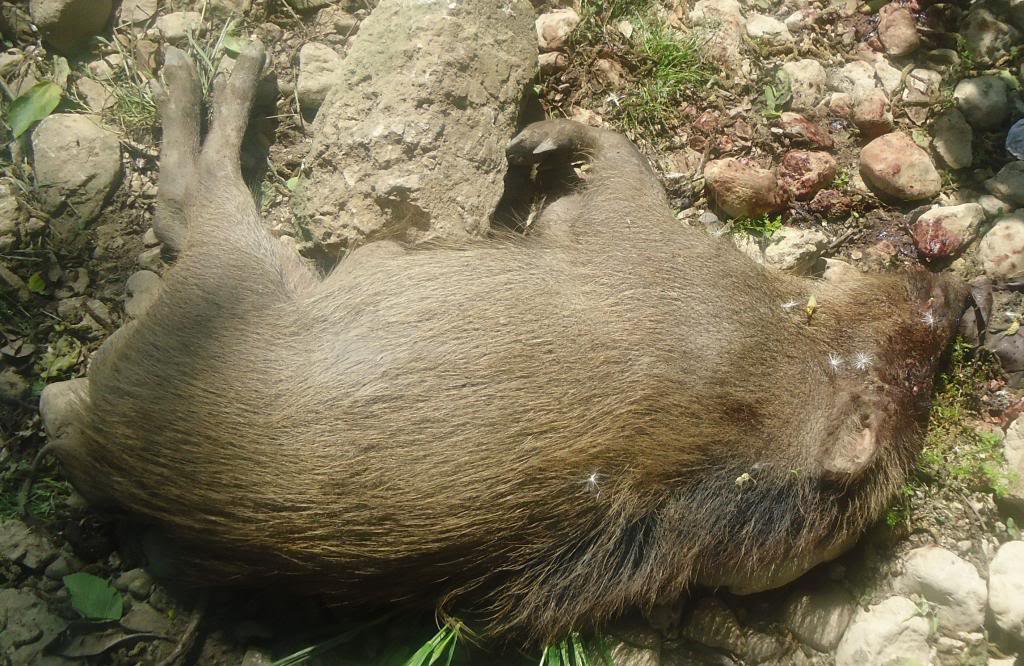 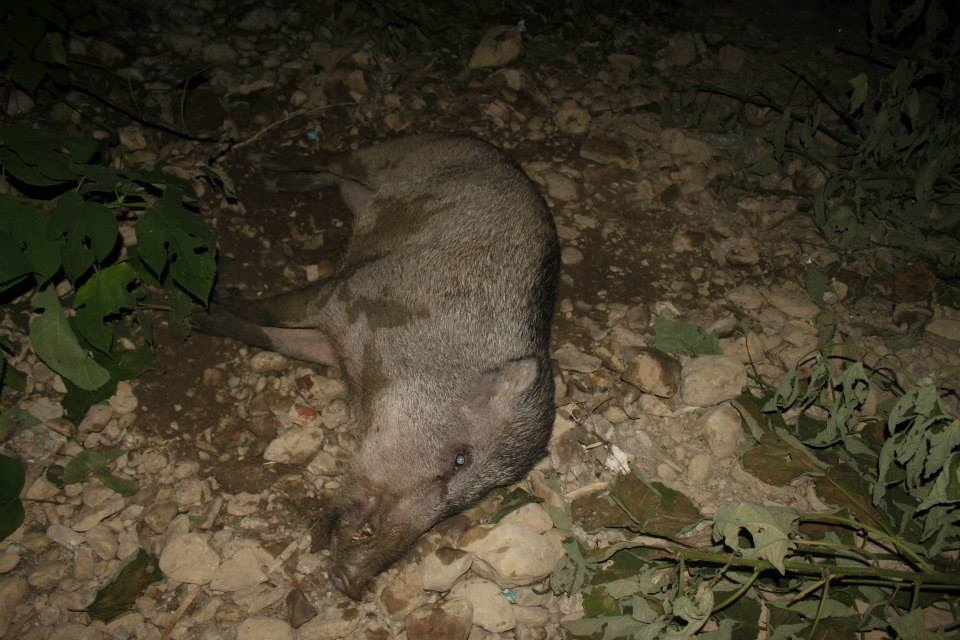 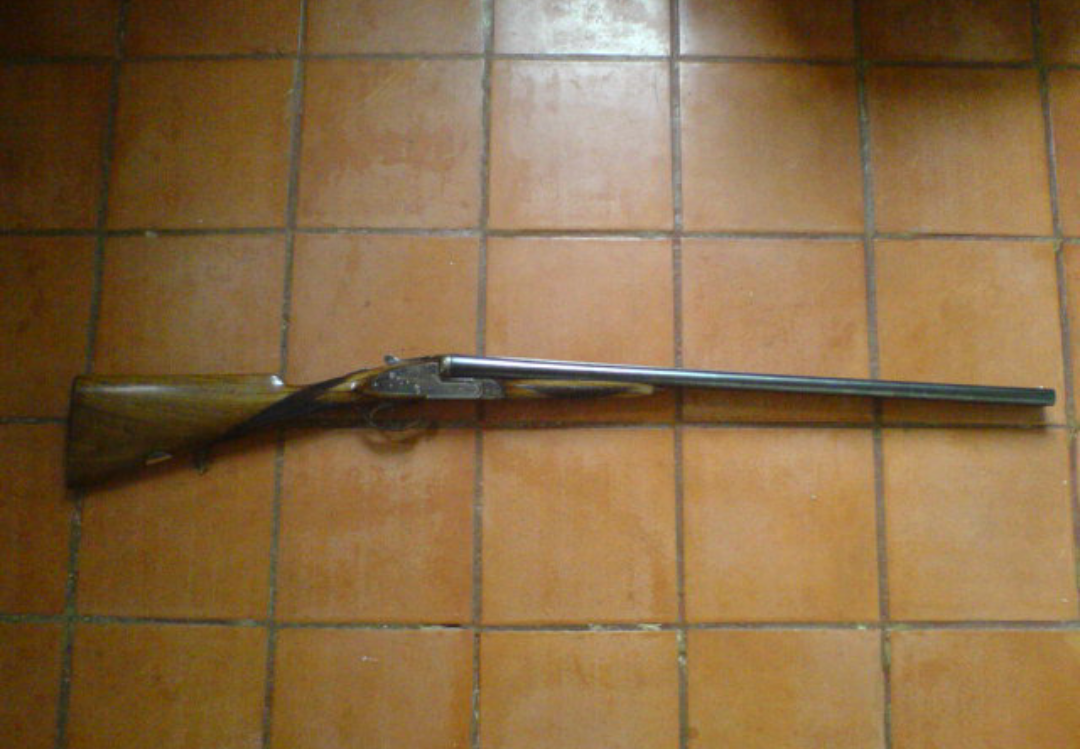 Laurona 12 bore ( 2 3/4 inch chambers) sidelock ejector side by side shotgun belonging to the author . 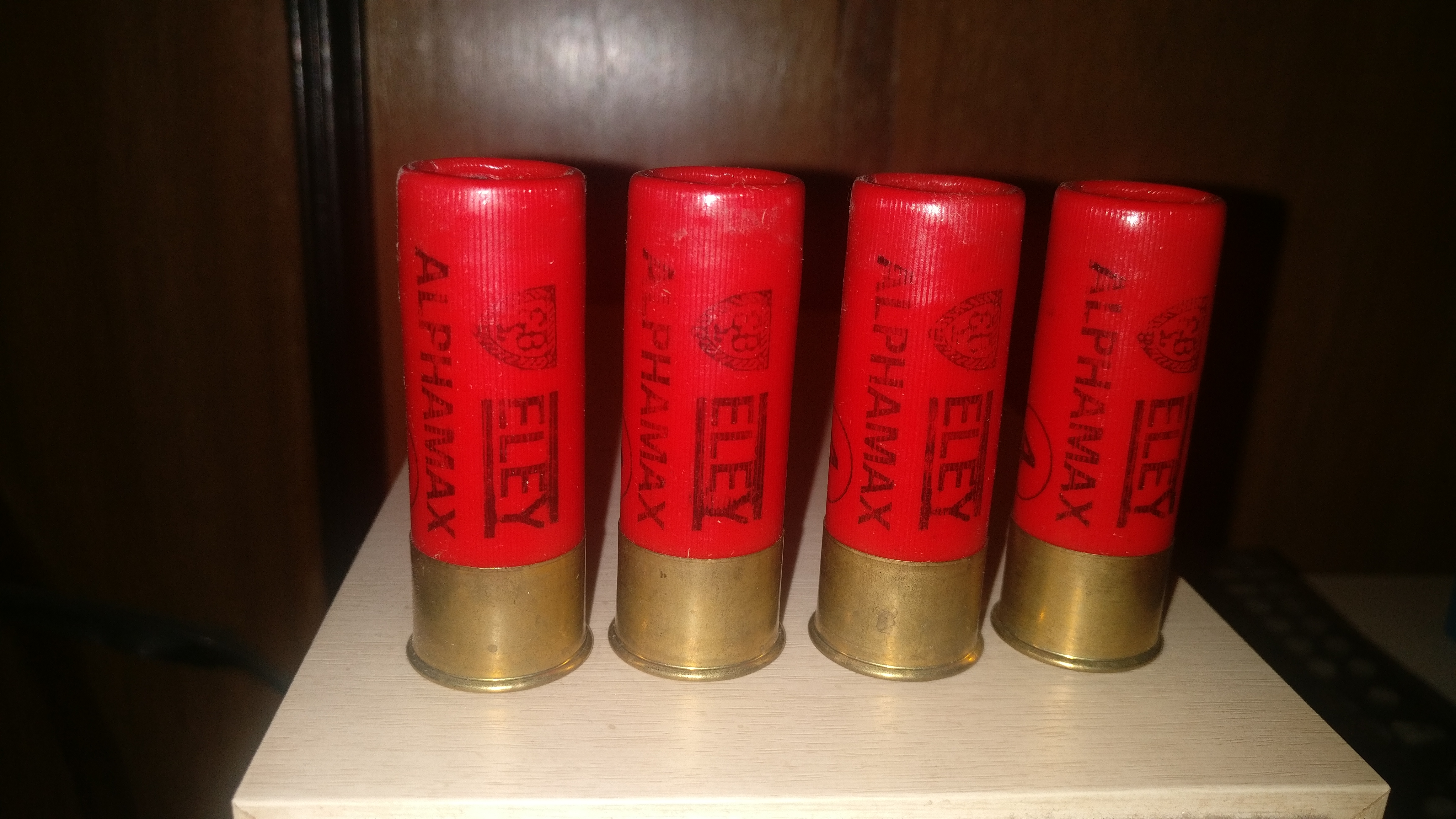 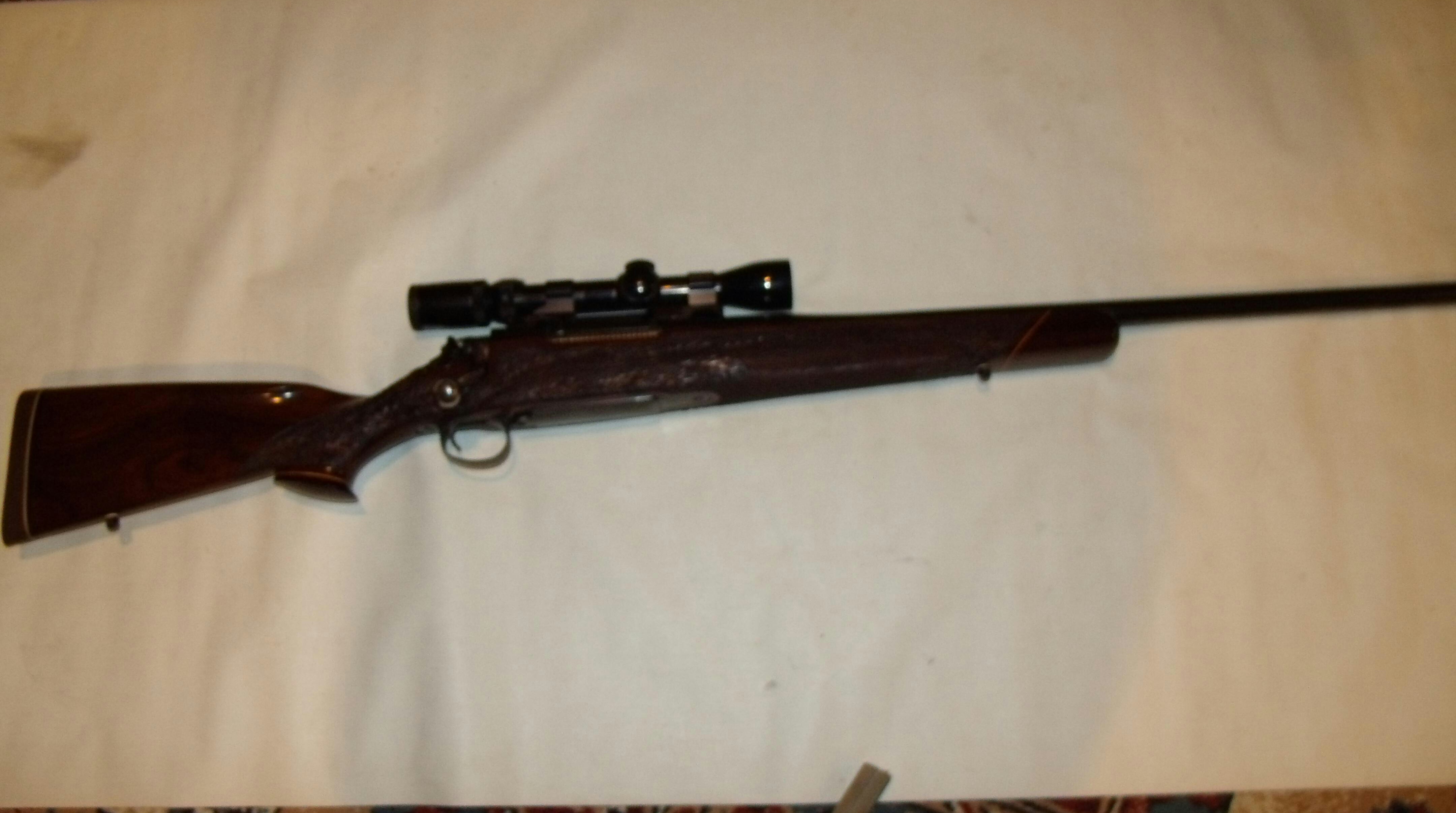 You definitely had the fire power!
What were the estimated weights of the hogs?

Buffalo1 said:
You definitely had the fire power!
What were the estimated weights of the hogs?
Click to expand...

How many Eley Alphamax LG cartridges do you have remaining , Anayeth ? They are worth their weight in gold now , ever since Eley ceased production of any cartridges ... Which are loaded with a shot size larger than BB .
M

Thank you sir,
I am following closely all these hunting reports from Bangladesh, from your friends and you, and I try to visualize local geography. Much appreciated, your explanation.

Major Khan said:
How many Eley Alphamax LG cartridges do you have remaining , Anayeth ? They are worth their weight in gold now , ever since Eley ceased production of any cartridges ... Which are loaded with a shot size larger than BB .
Click to expand...

@Major Khan Sir ,
I still have 18 rounds left . After that , I will have to switch to another brand .

mark-hunter said:
Thank you sir,
I am following closely all these hunting reports from Bangladesh, from your friends and you, and I try to visualize local geography. Much appreciated, your explanation.
Click to expand...

@mark-hunter
No problem . You may ask me as many questions as you see fit .

@Wyatt Smith
I am honored that you enjoyed it .

@Professor Mawla great read, thanks for taking your time to writing these short stories of your experience hunting in Bangladesh, really enjoyed reading them.

AnakKampuang said:
@Professor Mawla great read, thanks for taking your time to writing these short stories of your experience hunting in Bangladesh, really enjoyed reading them.
Click to expand...

@AnakKampuang
I am honored that you have really enjoyed it .

Interesting hunt and you collected some great meat on that hunt. Congrats again.

Buffalo1 said:
Interesting hunt and you collected some great meat on that hunt. Congrats again.
Click to expand...

@Buffalo1
I am honored that you have enjoyed this small report .

@Newboomer
Thank you very much . Hunting at night is highly thrilling .

What a grand time! I do so enjoy reading these experiences!
Thanks again!
Africa on my mind.

My congratulations on the hunt. The nocturnal waits of wild boar are exciting. Thanks for sharing.
"Only cheap things can be bought with money ..."

Ridgewalker said:
What a grand time! I do so enjoy reading these experiences!
Thanks again!
Click to expand...

@Ridgewalker
I am honored by your appreciation.
You must log in or register to reply here.

The Day We Realized That Wild Boars Are Dangerous, The Hard Way
2 3

The Art Of Hunting The Bengal Bush Boar: A Comprehensive Guide
2