Brief recap is I hunted with Star Valley Outfitters with Bob Beck of Extreme Outer limits TV show. I hunted Sept 15-19 and took a great Mule deer. We saw few moose and had zero opportunities. So being the gentleman he is Bob had invited me back Oct 15-17. 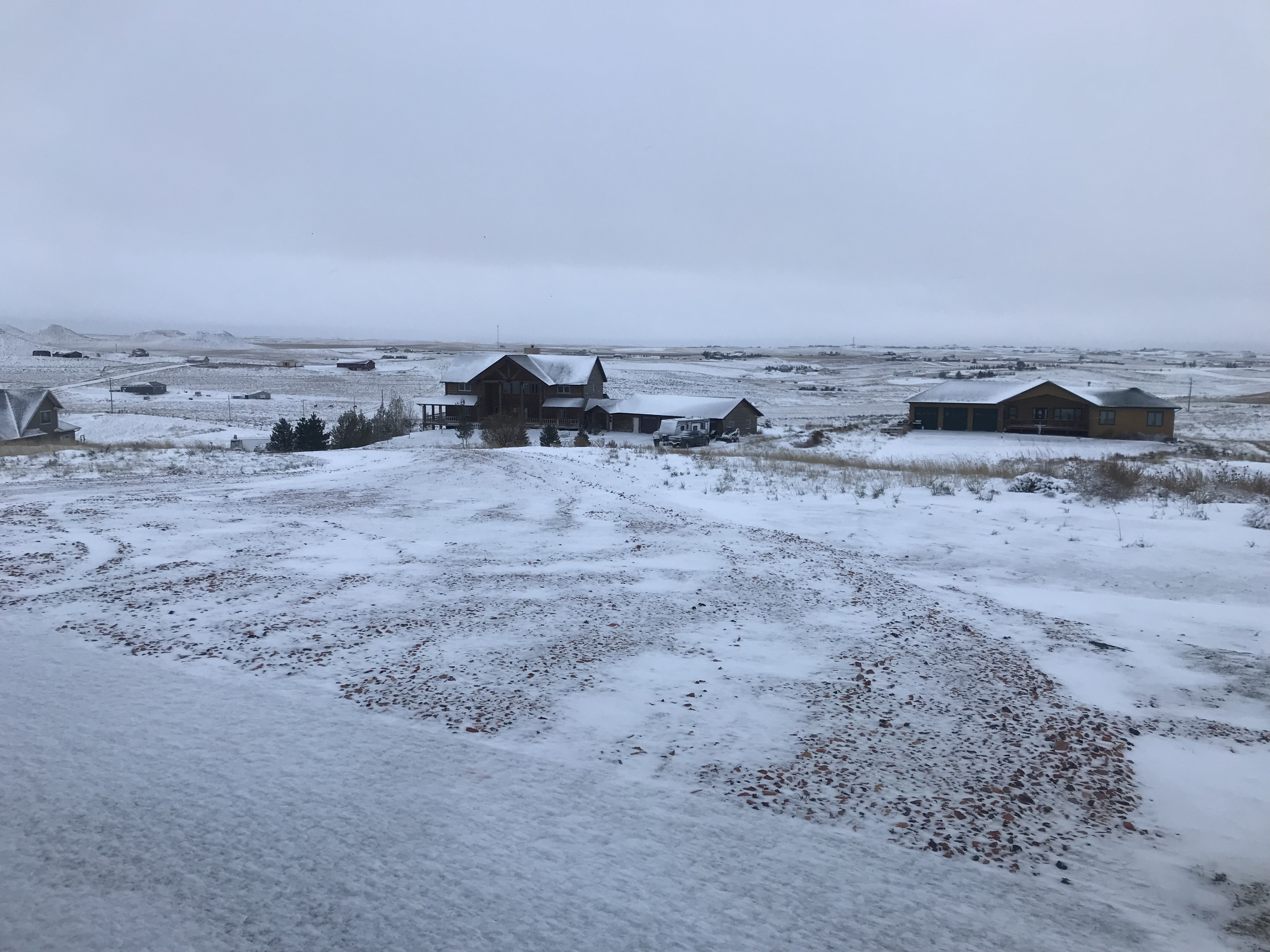 On Oct 13 it rained and turned to snow. Snowed all night... Above is what it looked like when I got in the truck for the 7 1/2 hr drive across Wyoming. Ice beneath the snow. So truck in 4 wheel drive I headed out. Ran out of snow once I got past Riverton. Truck picked up a little ice. 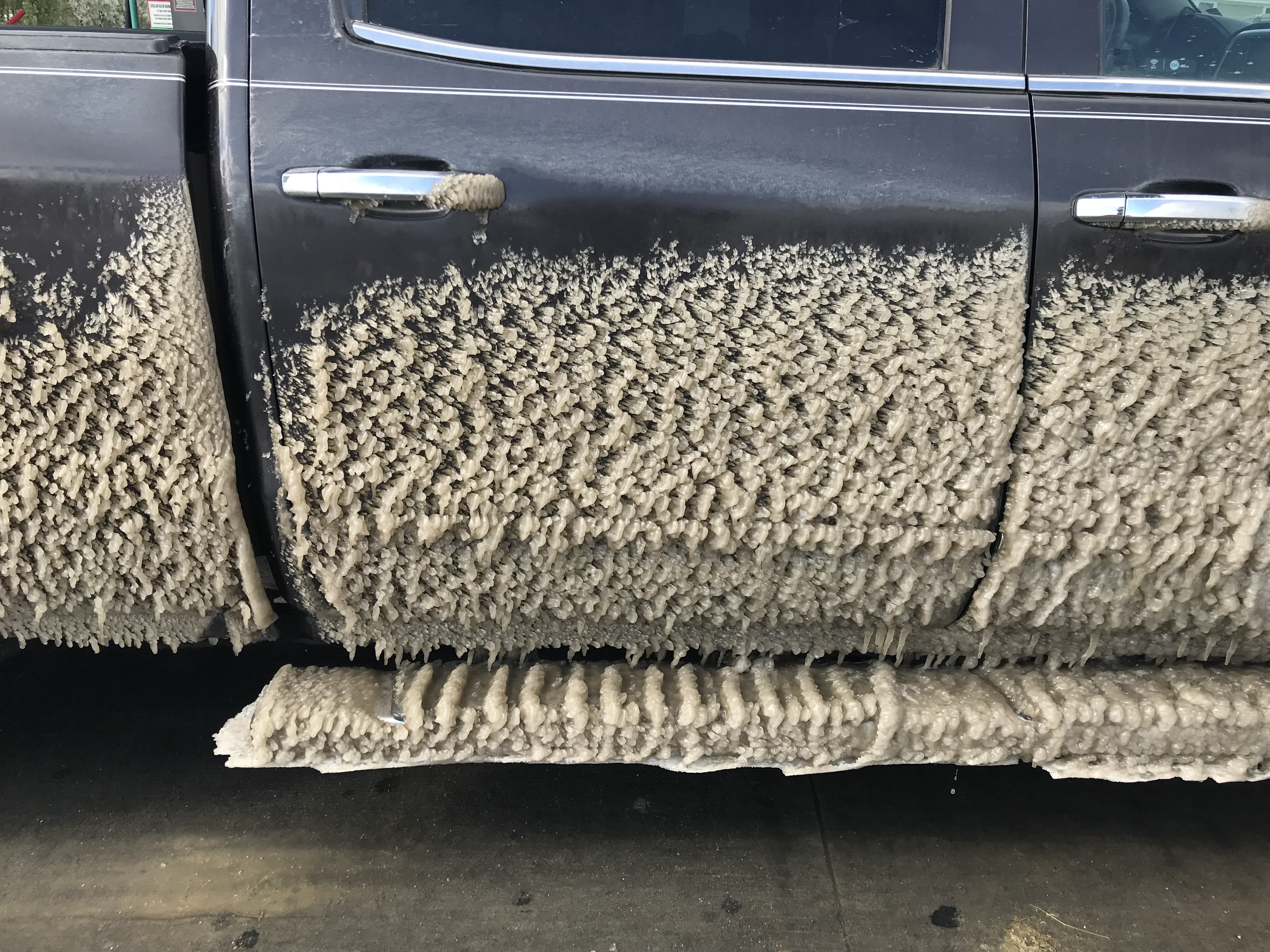 I hunted my way into camp hoping to see a moose going in. No such luck. Got to camp around 5:00 and set up in a tent. The 15th was opening day for rifle elk for one of the units they sit on. So they had 10 elk hunters in camp. The good part of that is lots of hunters in the woods that could help look for a moose.
Most of the leaves had fallen while I was gone. They had gotten some snow but mostly melted around the camp. Higher elevations still had snow, but warmer temperatures were forecast. The rut should be basically be done so a cow didn’t necessarily mean a bull was around.
Bob was to be my main guide. New videographer and a friend of Bob’s from New Zealand. He met Bob in Canada where he helped as horse wrangler and cook at a hunting camp that Bob had hunted at. He wanted to become a guide and apparently Canada has rules against that. So Bob wanted to hire him. He was there to check out the operation. Bob’s wife Chris was also tagging along. She had a elk license and there was a chance we’d see a good bull while looking for my moose.
We were up early and left camp a hour before daylight. We rode up to “mother moose”. Our goal was the valley where we had seen 7 of the 8 moose from the trip before. We arrived 10-15 minutes after legal shooting light.
We got off the horses and started glassing the valley. Within a few minutes Bob spotted a couple of moose 1/2 mile down the valley. We couldn’t tell sex. Only that there were moose. We started to walk their direction when Fate intervened. I felt the wind on the back of my neck . I mentioned it to Bob and the decision was made to get on the horses and make a loop so as to keep our scent from the moose.
We got on the horses and headed back the direction we had come in from. Only went 40 yds and I looked out below us as we just came over a ridge. I thought is that a moose? Then as a tree passed between me and the black shapes Chris says moose!! We got Bob stopped and bailed off the horses for a better look.
2 moose, a bull and a cow. I got a good look at the bull. I told Bob I thought he was under 40 inches. He agreed. The comment was made he had long points. Poor palmation but a mature bull. Bob’s comment was he is borderline. Your choice..... The bull politely stood there and looked at us while we debated. Given it was only the 2nd mature bull I had seen I decided to take him. Time was running out and I wasn’t sure we would have another opportunity.
The bull stayed put while we found a convient branch to rest my rifle on. 115 yds. I double checked the turrets!!! I pulled the trigger and the bull staggered backwards almost going down. The 215 grain Berger hit the front part of the shoulder. Went through and took out the top of the heart. The bull was down in 15 seconds and went less than 10 yards. Great performance!
He was only 50 yds off of the trail. So easy to get the horses to. 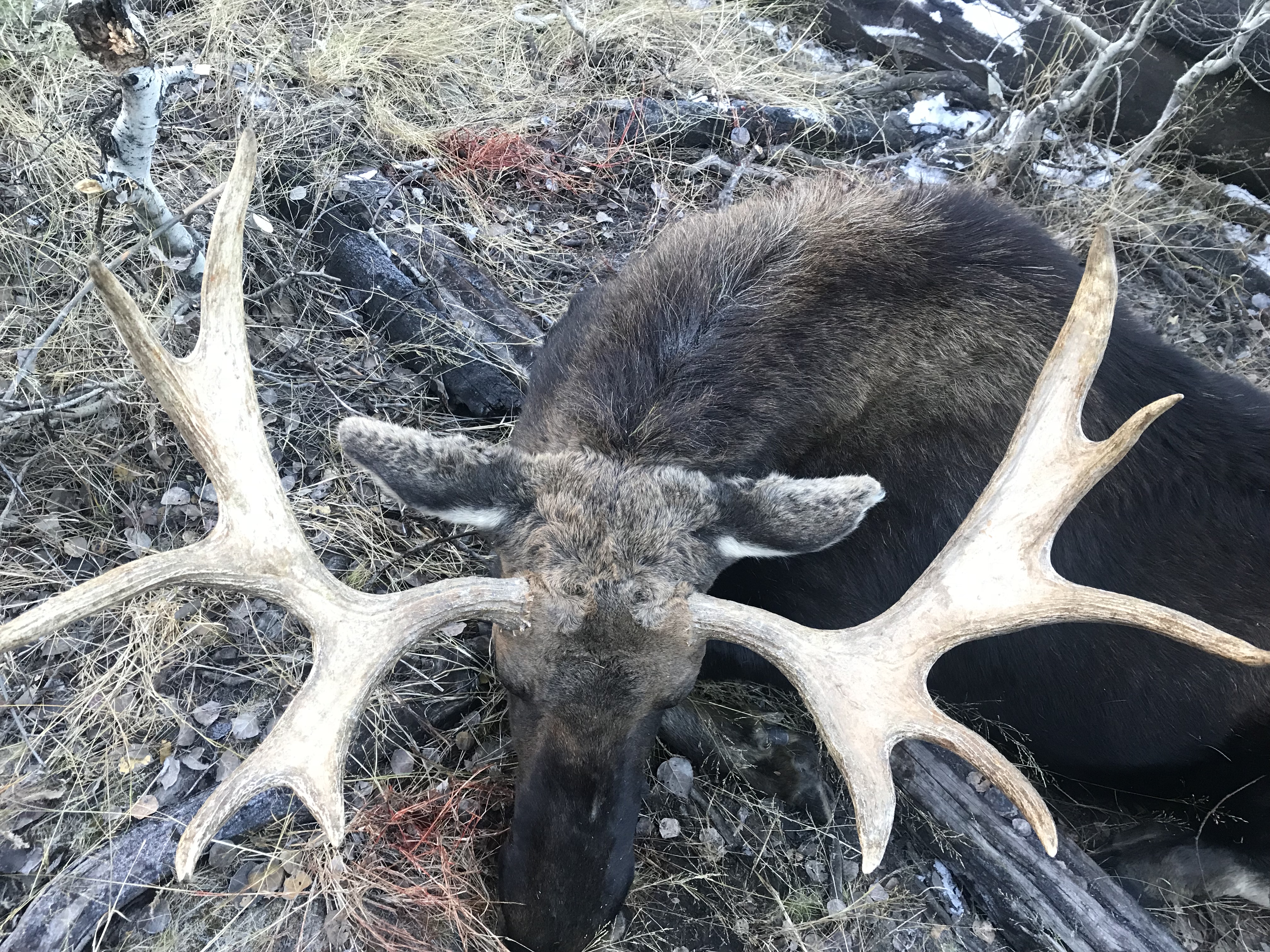 He was exactly what I thought he was. 38 inch spread and 5 points to a side. Loved the texture and color of his ears 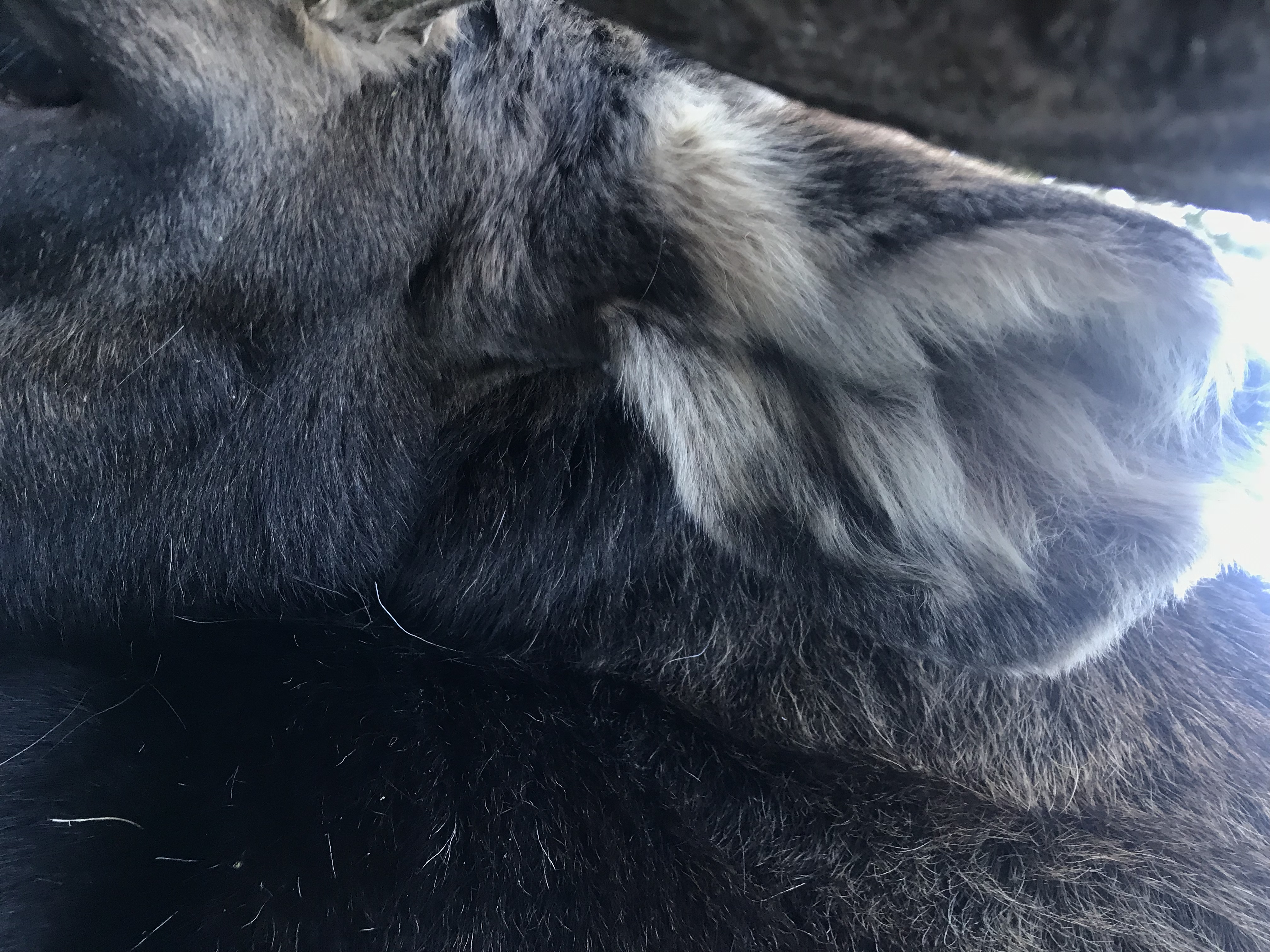 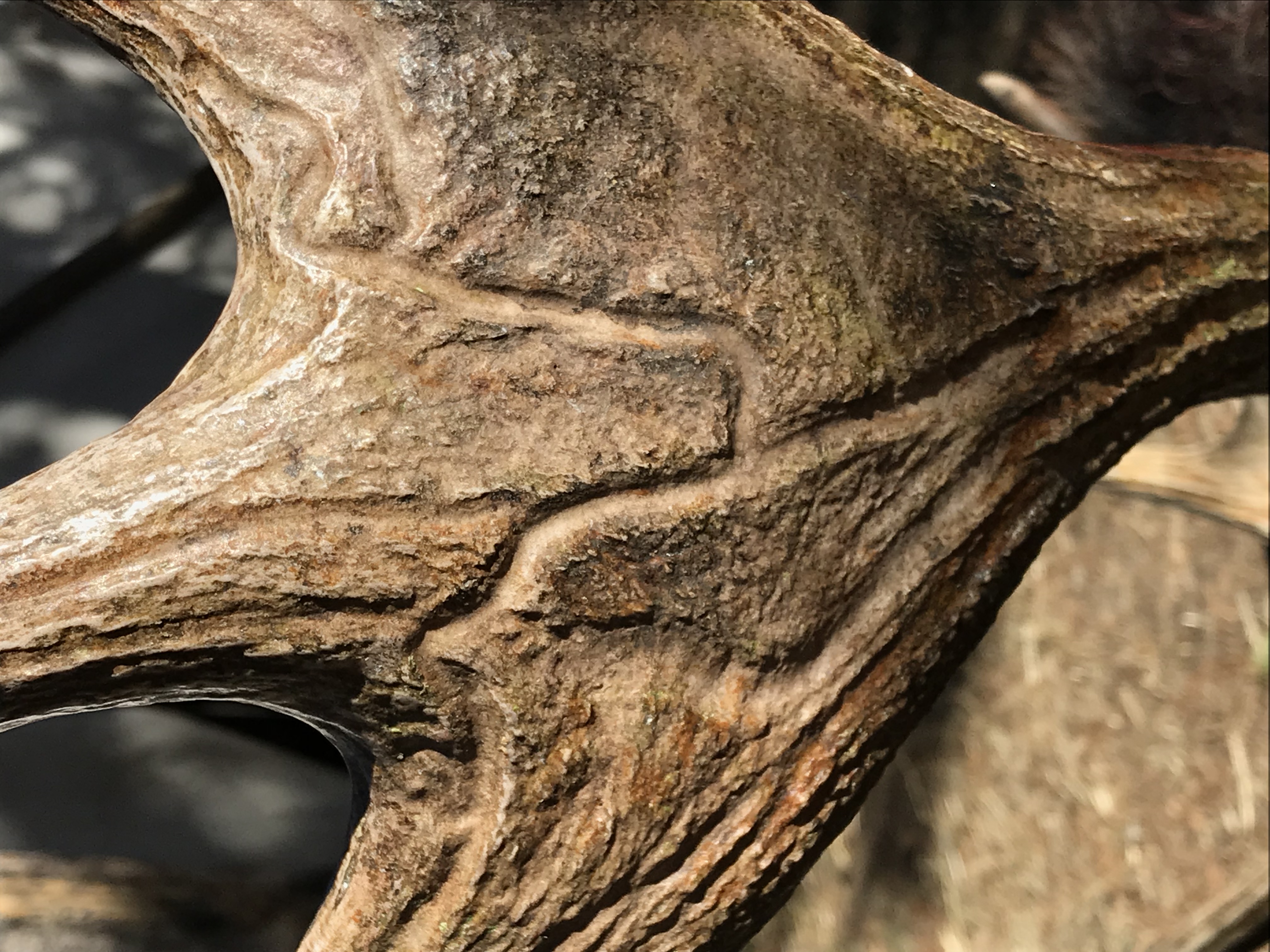 Interesting texture on the horns. Lots of good eating.
Final thoughts: This is not the best moose area. Right now for a resident it takes 13-14 preference points to draw. May be better places to hunt moose in WY. Now for a big deer this is a great place to hunt. The elk hunters had 3 down and a 4th that they figured to find in the AM of the 2nd day. My assessment is great deer and good elk hunting.
Bob has a nice camp. Good tens and beds with wood stoves to heat them. Good cook and good food. I’d hunt with him again.
The drive home was uneventful. Big herd of Bighors outside of Dubois. Then it took a bit to cut and wrap the bull and get him in the freezer. Glad to get that part done. I’ll post this and then add a few extra pics.
Bruce
Last edited by a moderator: Nov 9, 2018 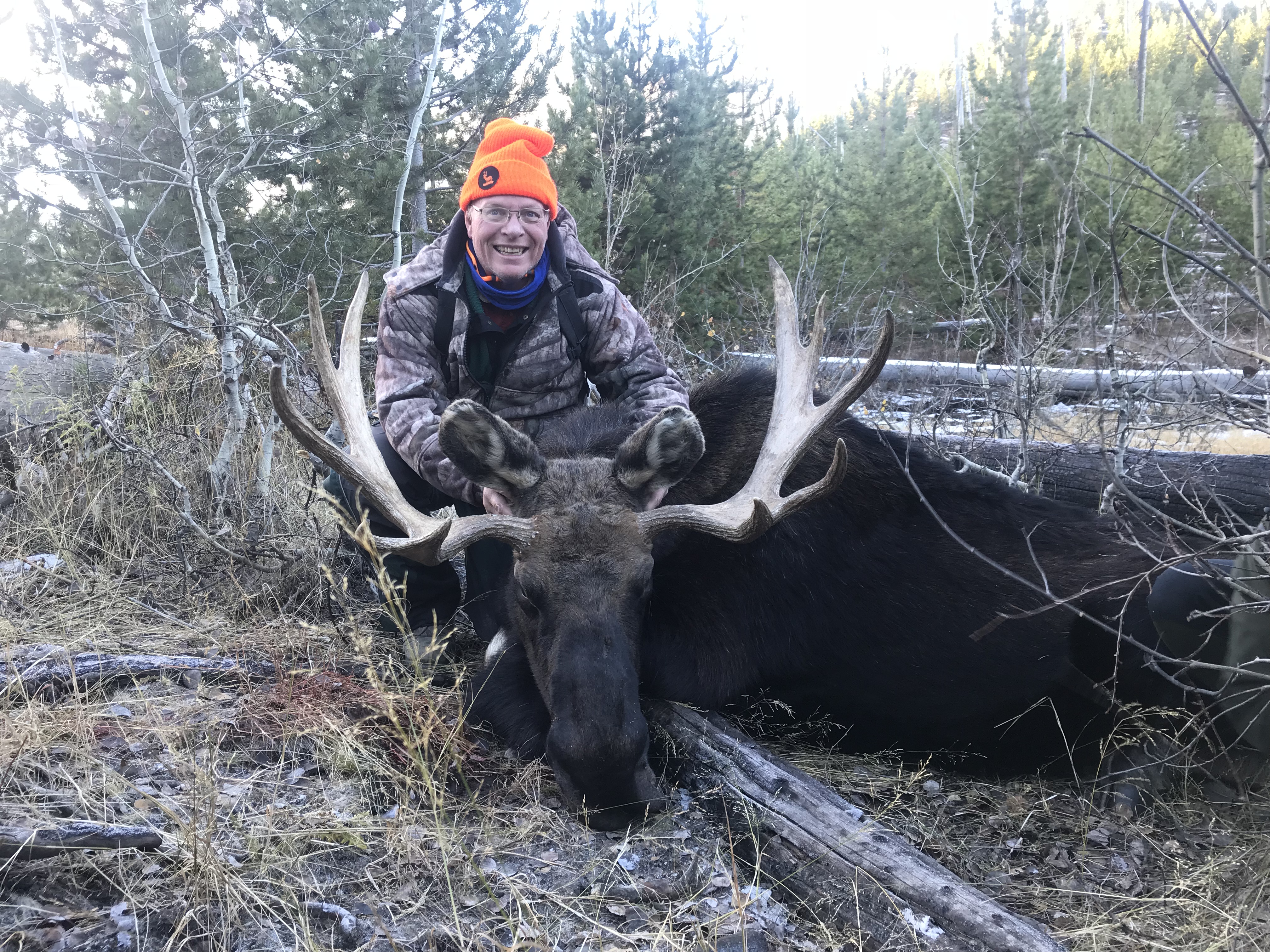 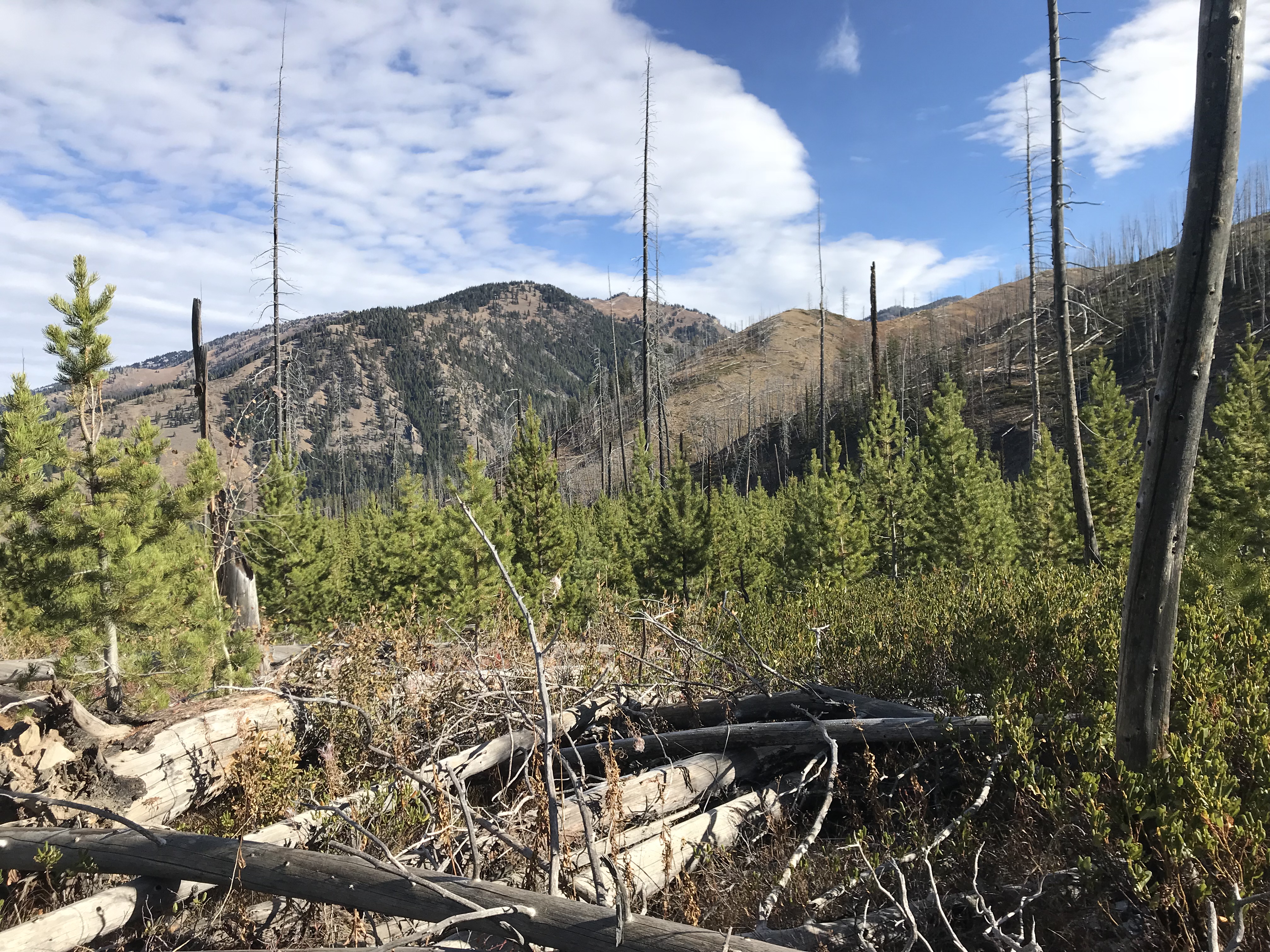 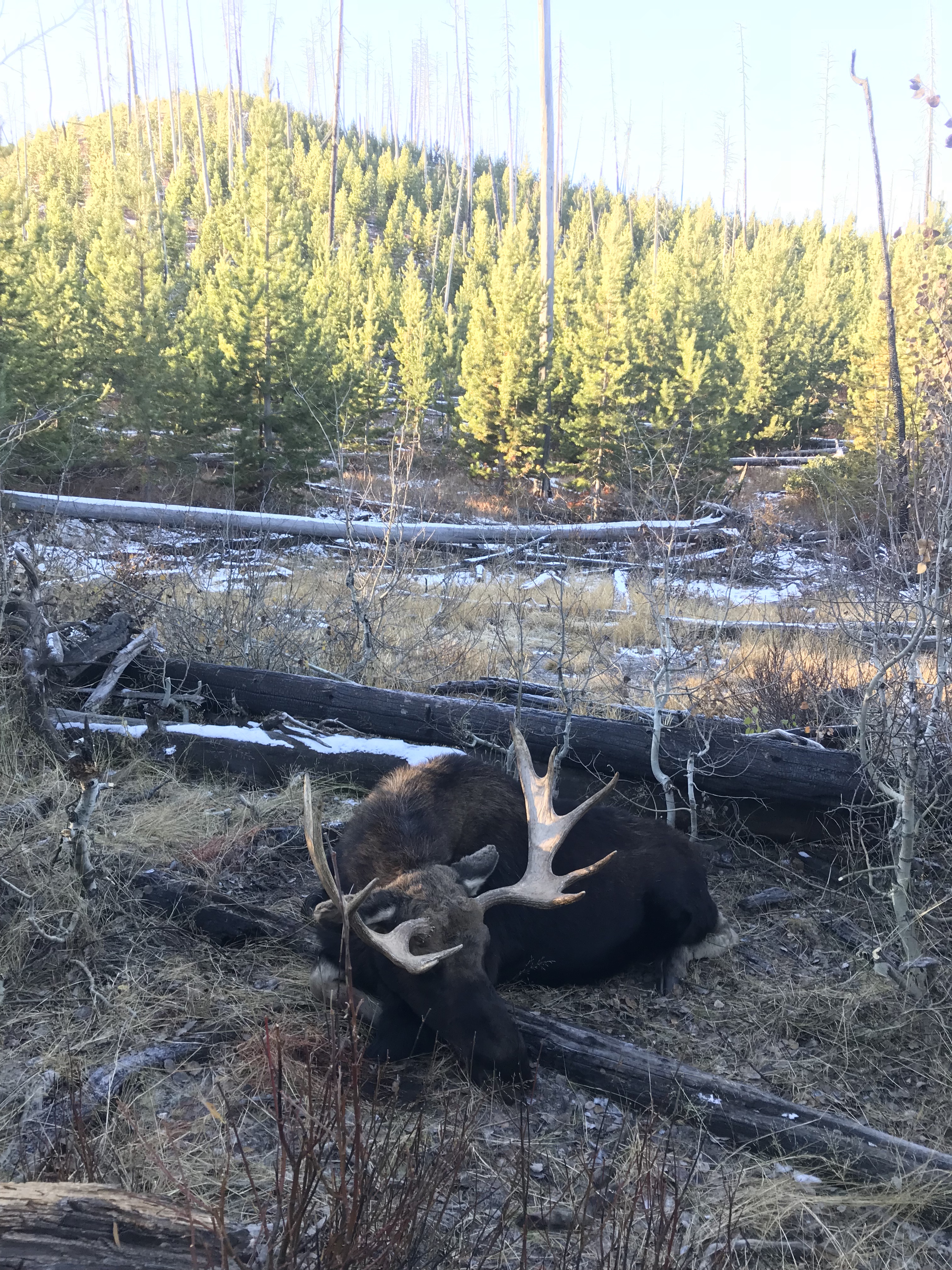 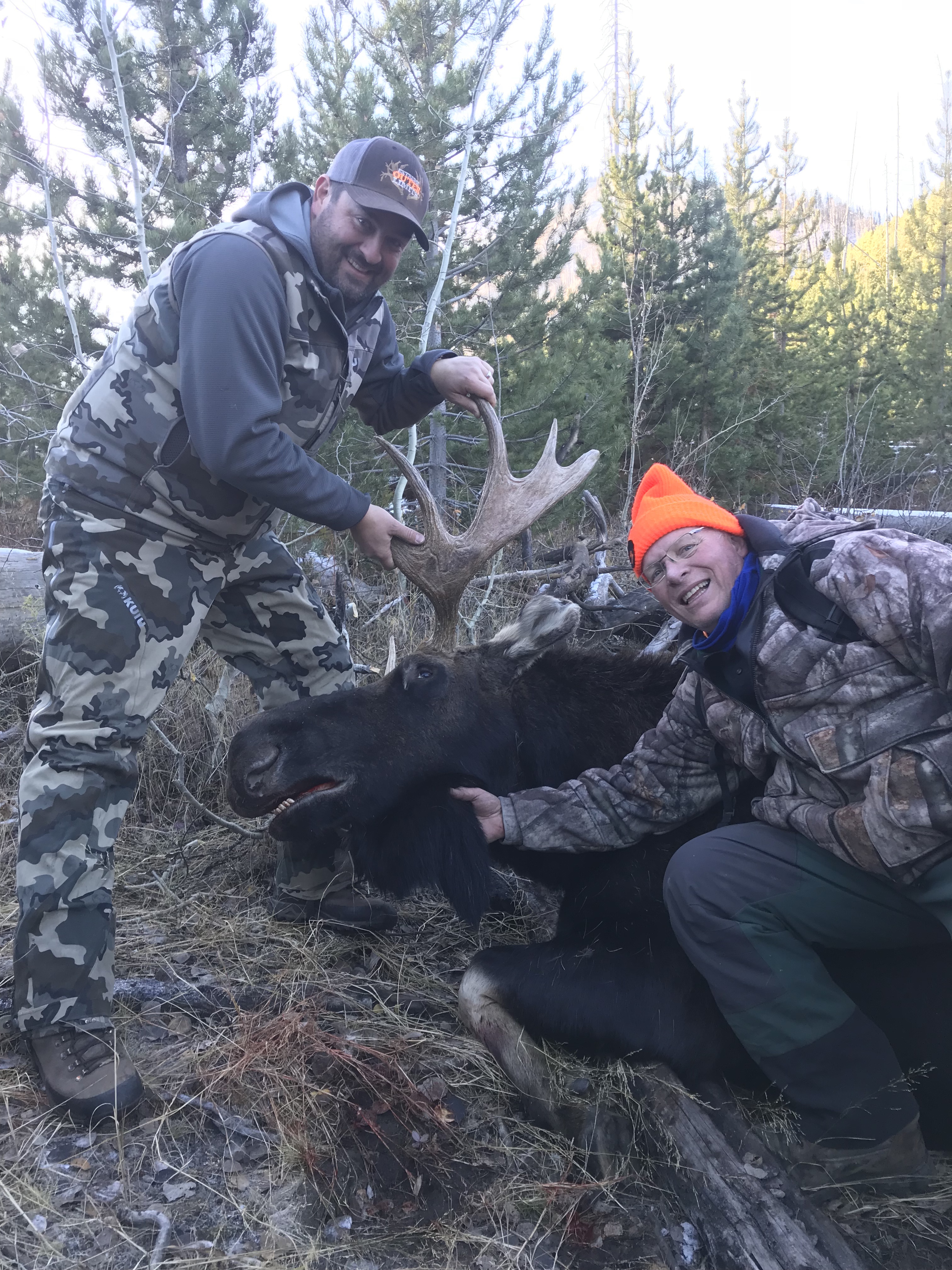 Congratulations! Great that the outfitter had you return and fill your tag! Speaks well to his character.
Cheers,
Cody
"Montana seems to be what a small boy would think Texas is like from hearing Texans" John Steinbeck

Thanks for posting! I have been waiting for this report for while. I was pumped for you when you got it! Congratulations and welcome done!

As I always say, any moose is a good moose. I think that rack on yours is very cool...much better than the one I shot in early October. So much beautiful meat! Congrats!
"I don't need to shoot farther...I need to hunt closer." - G. Sitton

Congrats on a nice bull in some beautiful country!
John 3:16

Congratulations! I am always surprised when looking at moose on how black some are, like yours. Beautiful! While not the biggest moose, the memories of the hunt will last a life time and filling the freezer with some excellent tasting meat to boot.

Congrats, somebody once told me "that you don't eat horns." Dittos on having good memories about the hunt.

I’d call that a fine success! Moose is just so tasty! If you have too much, you can ship some to me...!
Africa on my mind.
You must log in or register to reply here.