here is my experience with 375 bullets of different weights.
baseline is a 300 gn bullet zeroed dead on at 100 yds.
the same sight setting will put a 235 gn about 3" high at 100.
a 270 gn will be somewhere in between.
that is with stiff loads for 270 and 300 gn, and a fairly stiff but not as stiff 235 gn load.
this is what makes the 375 so versatile.
lighter game is often shot at longer ranges, and a dangerous game load bottom line is that it should be set up for close range.
the one sight setting can cover many situations and types of game just by changing ammo.
these 3 bullet weight notches can be made to overlap more so with modern bullet choices.
for example a 270 gn barnes will do what a 300 gn cup and core used to do.
combine this with a 235 gn speer, and you are well covered.
add a 235 gn barnes and versatility fills the gap.
load the mag with 3 heavy bullets if big game is the full agenda.
2 heavies in the mag with a light on top if there might be dangerous game while hunting light game.
then we can go into bullets like swift and northfork, and conventional bullets like sierra just to muddy the waters.
and so on.
this whole ammunition thing is a big part of what made the name for versatility with the 375 with 1 sight setting.
you can bet that some of those rich colonial twits would have had no idea about such things, but staying alive interested them enough to use what worked.
guys were killed using the 318 and such because it pulled its weight above average, but brought death to shooters who pushed them too far based on smaller game experience.
bruce.

Ridgewalker said:
I spoke to a Speer customer service gentleman and he says the 235 Hot Core has been used “quite successfully on plains game”. I have yet to kill anything with my loads, but they shoot pretty well using Hodgdon CFE 223 and Trail Boss. These are about as cheap of a practice load as I can come up with. If one shoots close to my 235 TSX, I may be taking it on my next Africa trip for lesser game, ie honey badger, genet, porcupine, serval. I hope to test it on coyotes this winter. Oh, the TSX will be for lion if all works out.
Click to expand...

My last trip to SA I had some dramatic results using Woodleigh 300 gr. PPSN. They don't seem to penetrate as well as AFrames, but open dramatically and maintain their weight. If I was going for lion I would sure consider them.
I have some 235 gr. Woodleighs and some 250gr. A Frames I want to try. Watching this post for load info.

375 HH. Woodleigh 300 gr PPSN. Left hand one was a Sable at 150-170 yards through shoulder, lungs and top of heart arteries. Stopped at diaphragm. Right was a zebra at the same distance. Tight behind shoulder, through lungs and stomach stopped under hide. 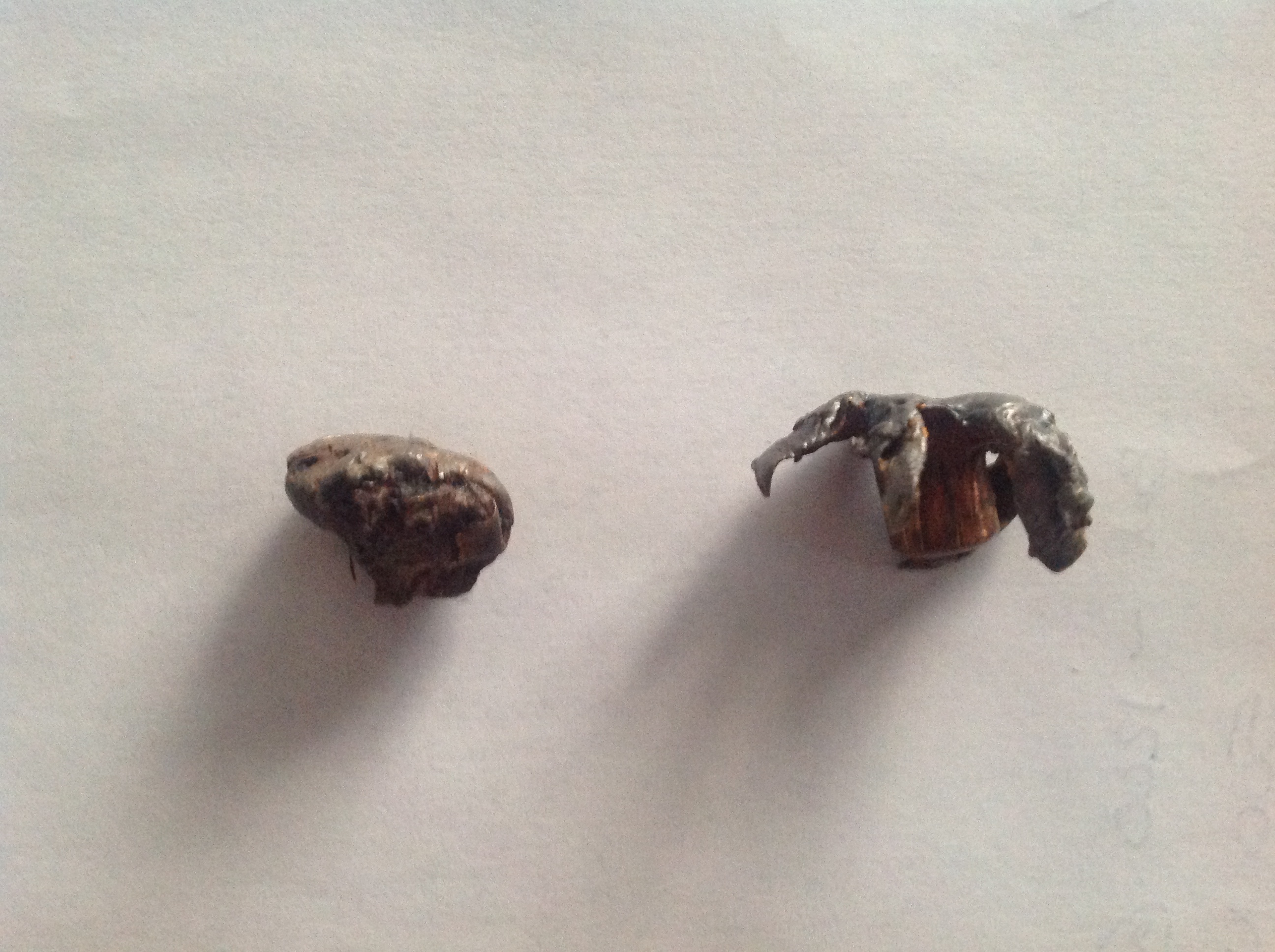 I wanted to revive this thread and see if anyone else had any recent experience with these. I just got into the 375 and tried these bullets over CFE223 powder and the accuracy is amazing. Top pic is a 3rd group at 100yds using a scope and the bottom pic is a 3 shot with the iron sights at 100yds. Rifle is a CZ550. Killed a whitetail with them a few weeks ago. Hard quartering to shot at about 70yds. Hit him just in front of the shoulder bullet exited just behind rib cage on off side. I'm running about 2850fps I would guess. Middle range charge of CFE. I just booked my first safari for June of 2022. Cape buffalo and Kudu in Zimbabwe. I plan to use the 375 for Kudu and hopefully some smaller plains game. I have a CZ in 458 Lott for the buffalo unless I decide to use the 375 for that too. 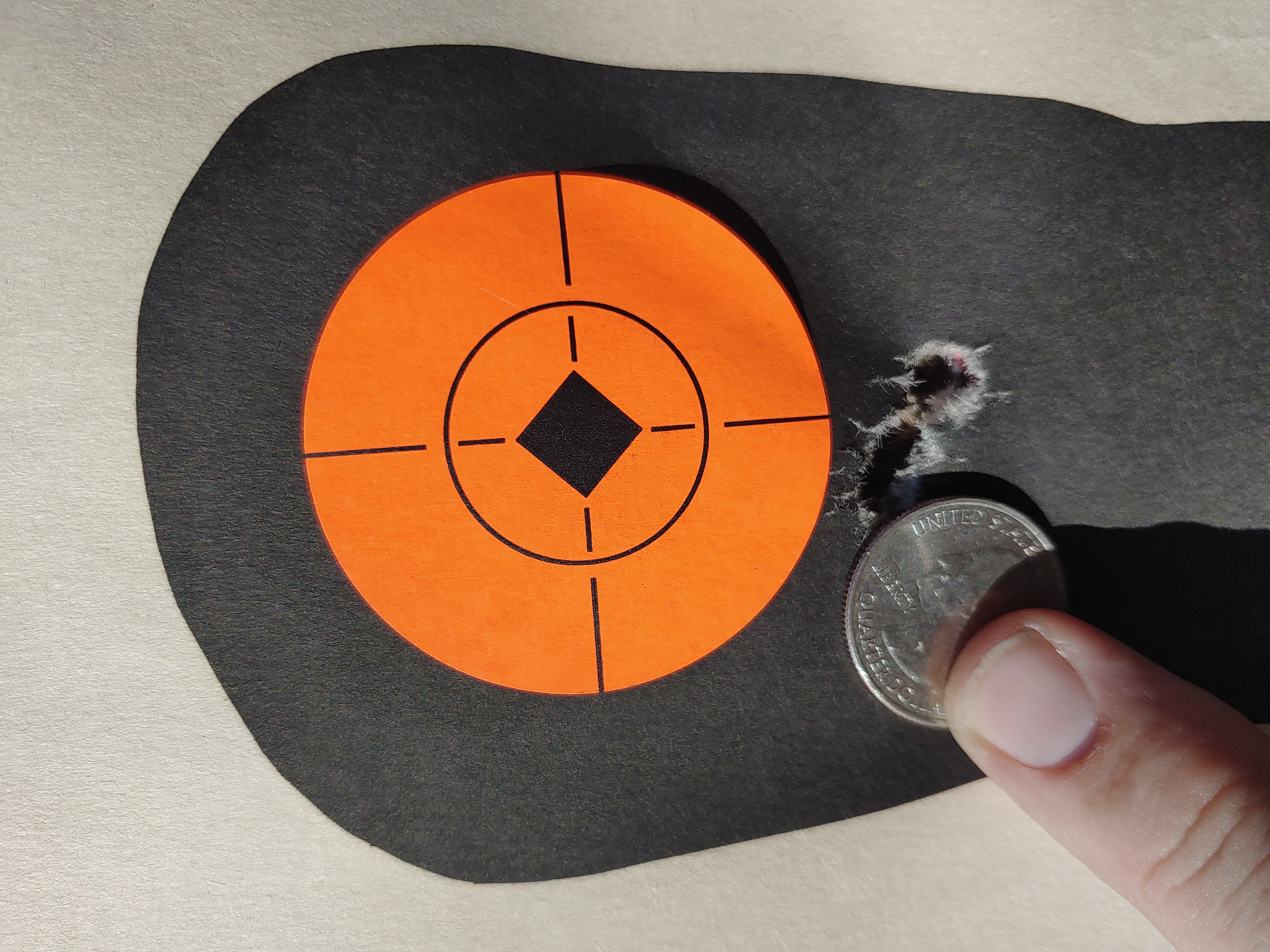 Everything I have read or heard says light bullets at high velocity destroy meat and trophy. So some are suggesting downloading it. What is the point when a regular 300 grain superior bullet at 2550fps does the job? My zebra shot with a Speer ran a bit and dropped. The bullet looked terrible and weight retention was in the lower eighties if I recall correctly.
Carruthers

Backyardsniper, I use the Speer 235 bullet for practice because it is so cheap, but I prefer a premium bullet for Africa. The 235 in any brand is very stubby.
In Africa it is quite possible you will have to shoot through some brush to take your trophy. The longer bullets stand a better chance of success passing through tall grass or brush.
As far as accuracy, I have shot the 235 Speer using a full grain difference in 8 shots into a 1 1/4” group performing a ladder test. Only the first fouling shot caused it to be over an inch.
I would save the Speers for practice, deer, and maybe hogs. The 235 doesn’t “ beat you up” as much as the 300 and costs substantially less.
Africa on my mind.

That sounds like a pretty good plan. I just bought 500 of them and I got an 8lb jug of CFE. I should be able to get a good bit of practice in. The coyote hunting is gonna be getting good before long. I plan to get some solid practice in the field shooting coyotes with the 235's
I

I would definately not recommend 235 gr speer bullets for use in Africa(jackals maybe). Stick to 300 gr bullets and avoid dissapointment....
9

I know last post is several months old, but was curious how Backyardsniper is getting along. Wanted to offer... I killed a small whitetail a couple of years ago with that speer 235 bullet. Shot it in the neck and the wound was pretty devastating. Just the skin was holding the neck and head still on when I broke down the animal. I know the bullet exited because it cut down a small 2-3" caliper cedar tree that was behind it. I actually thought I missed when I saw that tree top topple over and saw no deer go down, but he was there, bang flop. Bullet hit so hard that a bunch of the hair from the offhand side got knocked off and was found in the foliage of the tree. I know, one of those stories that my hunting partner and I agreed noone would believe unless they were there. Keep meaning to chronograph that load because I never had time before hunting season, just verified point of impact and went. I'm guessing it was pretty high even though at book start charge, because that case/rifle combo seems to shoot fast when on lower end of load data and I usually stop quite low.
You must log in or register to reply here.