As a reward to myself after a tour of duty in Afghanistan I decided to make a life long dream come true and go on a safari. With so many outfitters in Africa it can be a little overwhelming to decide where to go. Fortunately, I found Mr. John McAdams at Big Game Hunting Adventures (biggamehuntingadventures.com). A fellow veteran and avid hunter, McAdams patiently walked me through all the ins and outs and hunting in Africa and help me customize a safari that fit both my goals and budget. We decided on a 10 x day plains game hunt with Kok and Seyffert Safaris from August 1-10 2016 in South Africa. Prior to my flight, McAdams provided me with detailed instructions and pictures of what to do once I arrive in the Johannesburg airport including pictures of who was picking me up which made my time at the airport a breeze. Far from what I expected.

I was greeted at the airport by my professional hunter Kobus Kok with a smile and firm handshake and the words, "ready to go hunting!" Absolutely!!!! After a 45 min to an hour drive we arrived at the first of our two concessions we would be hunting during my safari. I was fortunate to arrive in the morning so there was plenty of time to get settled, have lunch, and get to the field. The accommodations were first class. I stayed in a two bed brick hut equipped with all the modern conveniences one could ask for. After a short rest and some lunch Kubis and I headed to the rifle range to make sure everything was on point. Driving to the range, I saw more game animals than I have ever seen in my entire life hunting in Texas. Herds of Blesbok, Wildebeest, zebra, and pairs of water buck had my heart already racing. Once we knew the rifle shot true, we began our safari with zebra being the first target on our list. We approached three groups before deciding to take a a beautiful old stallion! I was literally speechless and in disbelief that my life long dream had now officially begun! During my time at the first location in Gauteng province I was blessed to take a beautiful zebra and monster Black Wildebeest, Common Blesbok, White Blesbok, and a springbok. Each of the animals were incredibly large. Prior to going to Africa, I spent a lot of time researching what is considered "big" for each species on my list. Kobus' expert eye resulted in very nice animals that I am confident will score very well using the SCI system. 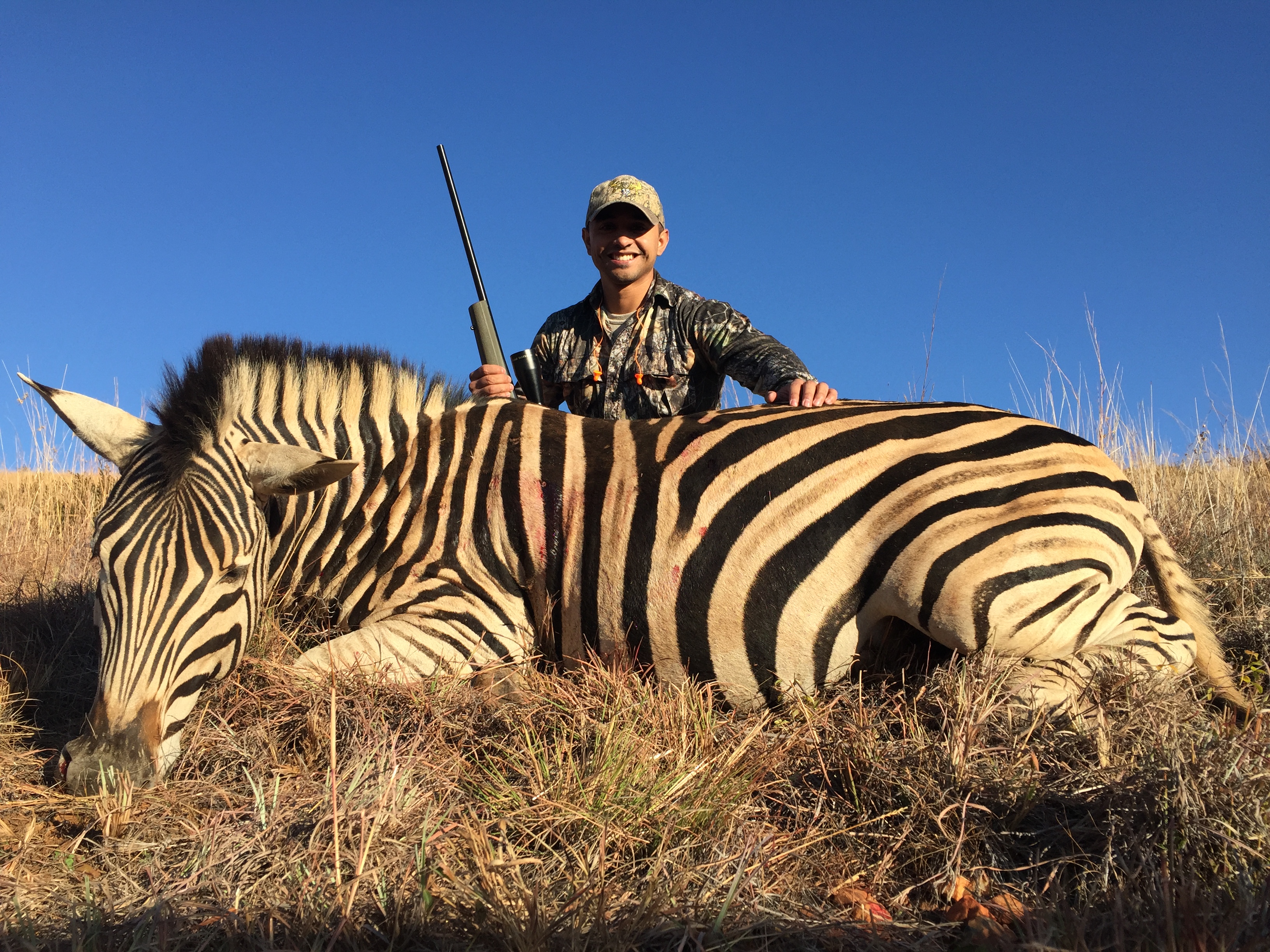 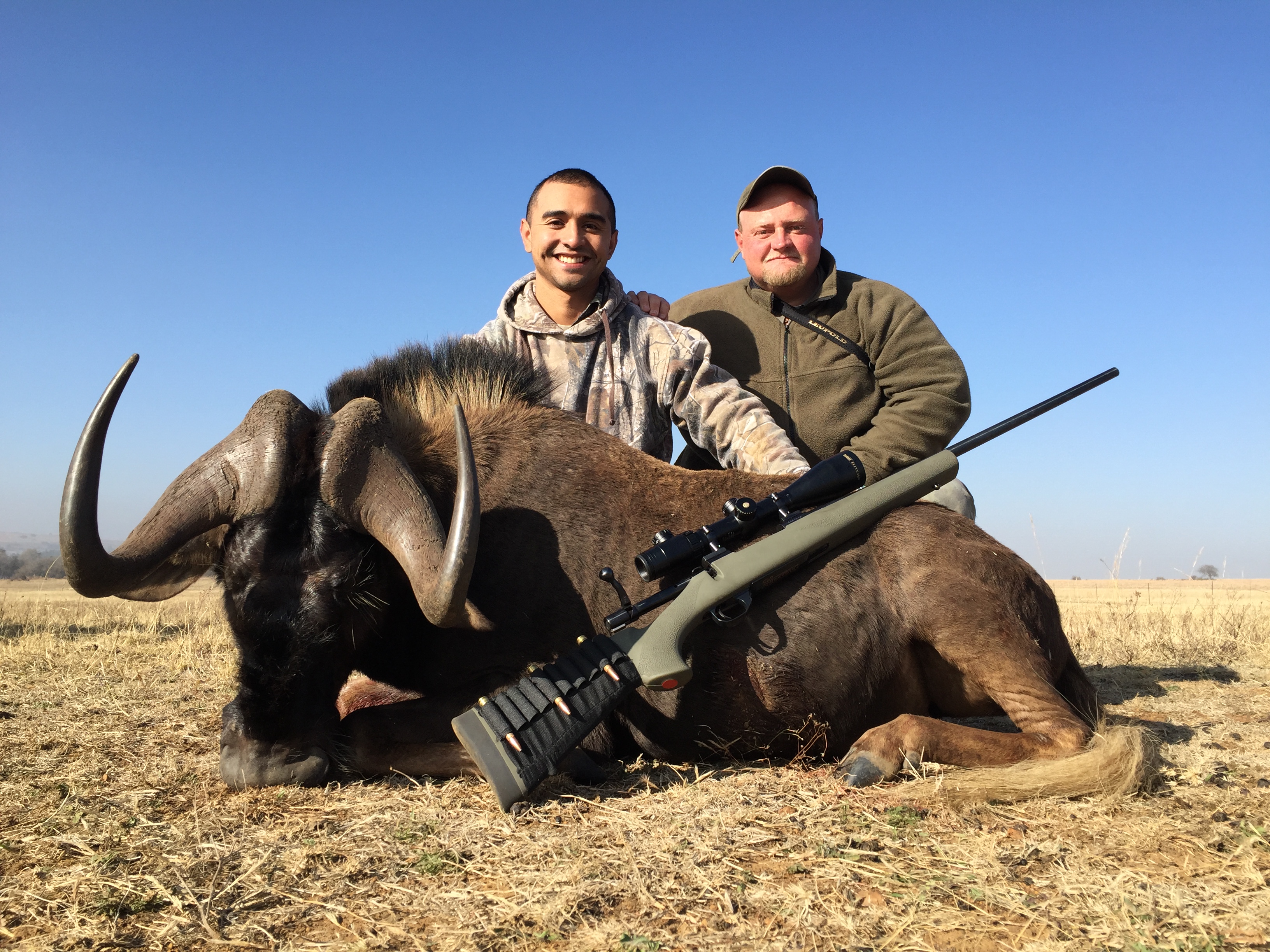 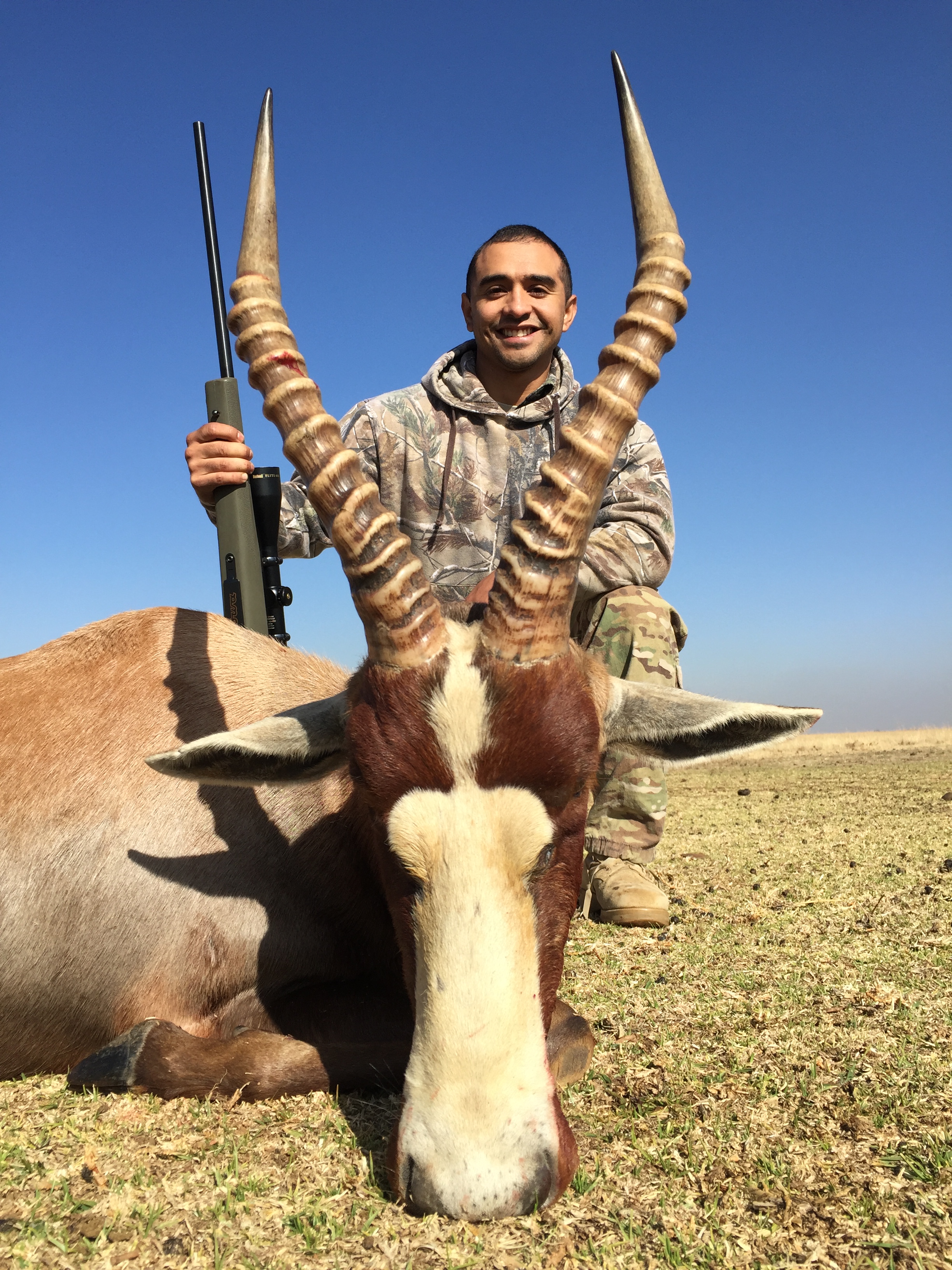 As my time in Gautang province came to a close, I was both excited to head north to our second concession and sad to leave such a beautiful place with such plentiful game. Kubus assured my I would be just as amazed if not more so in their Limpopo concession. It was about an 8 hour drive from on concession to the next and though this took an entire day I thoroughly enjoyed the trip. Kobus was very knowledgeable not only about the animals but the local history as well. I enjoyed our discussions and the time flew by as we made our road trip allowing me to see a little more of South Africa than I initially imagined. We made several stops and I thoroughly enjoyed each...from the Safari store which allowed me a brief look into the local hunting scene in Africa, to the Biltong shop where I got to sample some of the local fare, to the grocery market for a unique cultural experience.

We arrived in our second camp near the city of Alldays in the Limpopo region literally on the border with Botswana. This area had a much wilder feel to it; I can't really describe why...but it reminded me of the Hemingway books that were the seeds to my desire to come to Africa. The accommodations were still nice providing everything you could ask for. The biggest differences was the bush. rather than miles and miles of grassland areas of thick bush surrounded the camp. But much like the Guatang province, game was plentiful. We spotted countless impala, many Kudu, and a few bushbuck as we made our way to camp. Not to mention the countless baboons and monkeys. We arrived to late to hunt that day, but the next morning we walking the bush in search of impala, bushbuck, and kudu. Over the next three days we walk dozens and dozens of miles and I was bless to take a 54" kudu, a 16" bushbuck, an incredible impala, and a bushpig and warthog. What an amazing experience. 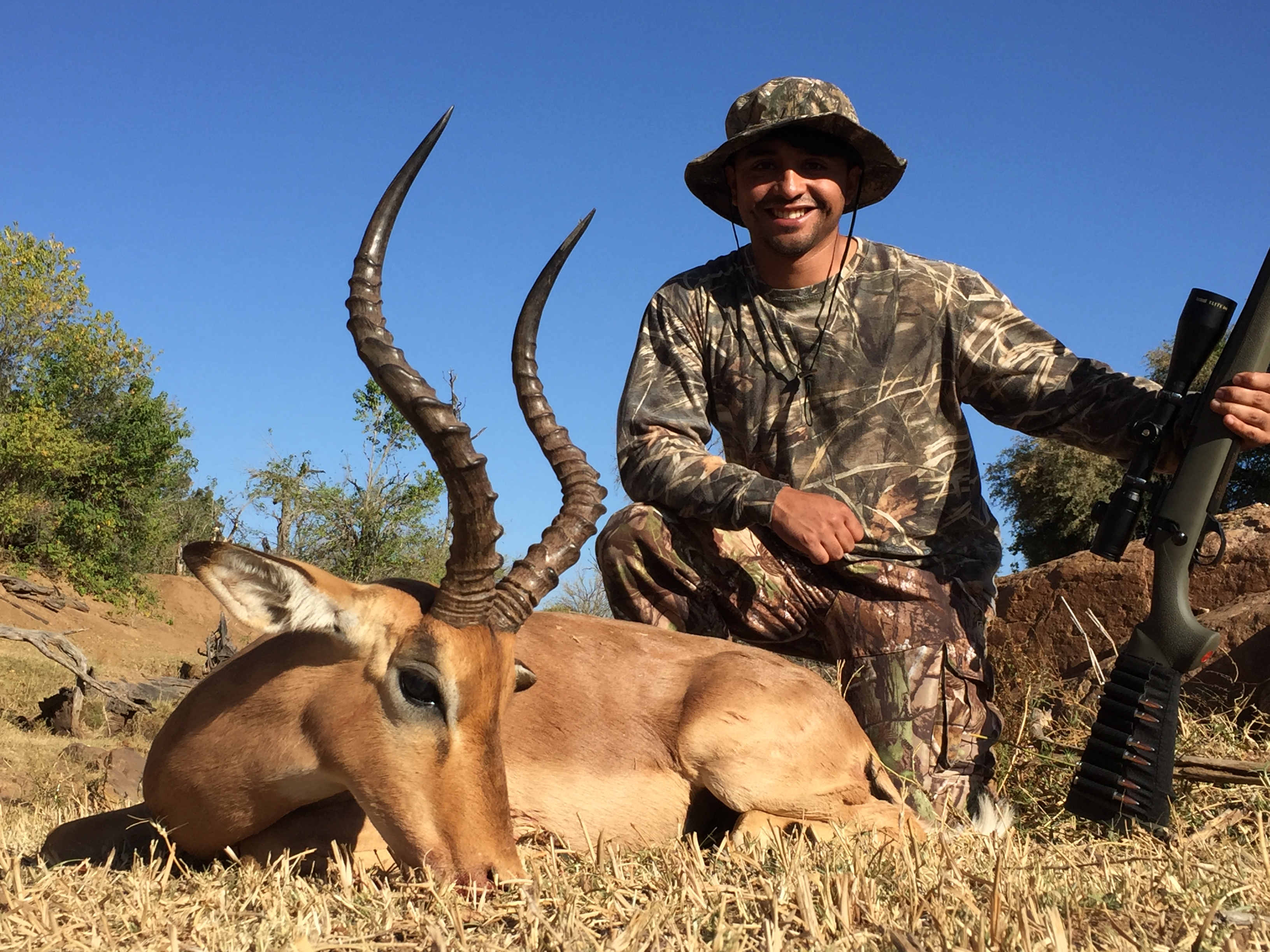 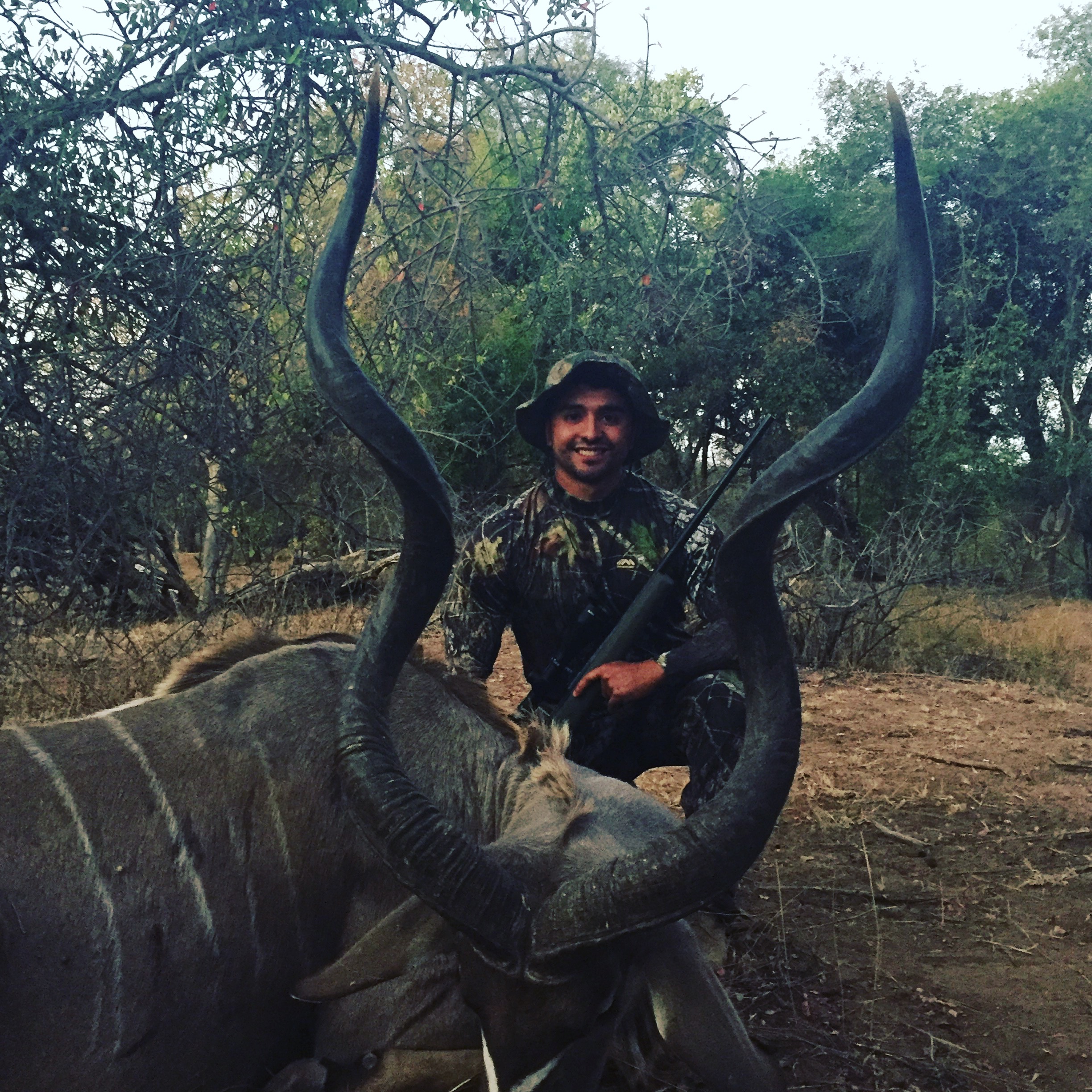 One of the two best aspects of my hunt was the fact I was the only hunter there. I literally had my own African paradise and the complete attention of my PH and the rest of the staff. As a knew hunter and the fact that I was a one man party, this was very important to me. I did not want to have to "compete" for attention. I felt like a VIP the entire time. Kobus stated they believe in the one party at a time policy deeply and I applaud them for that. When you hunt there it is literally all about you.

The other best aspect of the hunt was my PH Kobus. When I arrived and shook his hand that first day at the airport we were client and PH. When I shook his hand getting on the plane to return to the United States, we were friends. That sounds very cliche but it is the truth. Kobus was professional, extremely knowledgeable, accommodating, patient with a newbie like me, he delivers everything he promises, and above all he is a good man. I enjoyed every second we spent together and I am very much looking forward to hunting with him again in the near future.
Last edited: Nov 30, 2016

Welcome to AH @Matthew Acosta ! Congrats on your safari and thanks for sharing!
John 3:16

Looks like a great trip Matthew, congrats! Thanks for your service!!

That genuine grin on your face says it all.

Thanks for sharing your hunt with us. Welcome to AH, by the way.

Congratulations on a great trip and thank you for your service!!
JasonY

Thank for your service as well. And thanks for the GREAT report ... sounds like you had a great safari.

Any pictures of that bushbuck?

Welcome aboard and thanks for your service and sharing your hunt with us. Nice animals and a great report, makes one think you've been bitten by the African Hunting Bug. The only cure for that bite is to return in the future perhaps with a friend. Out of curiosity what caliber and make of rifle did you use? Did you use commercial ammo or do you "roll your own?"

Scott Slough said:
Thank for your service as well. And thanks for the GREAT report ... sounds like you had a great safari. 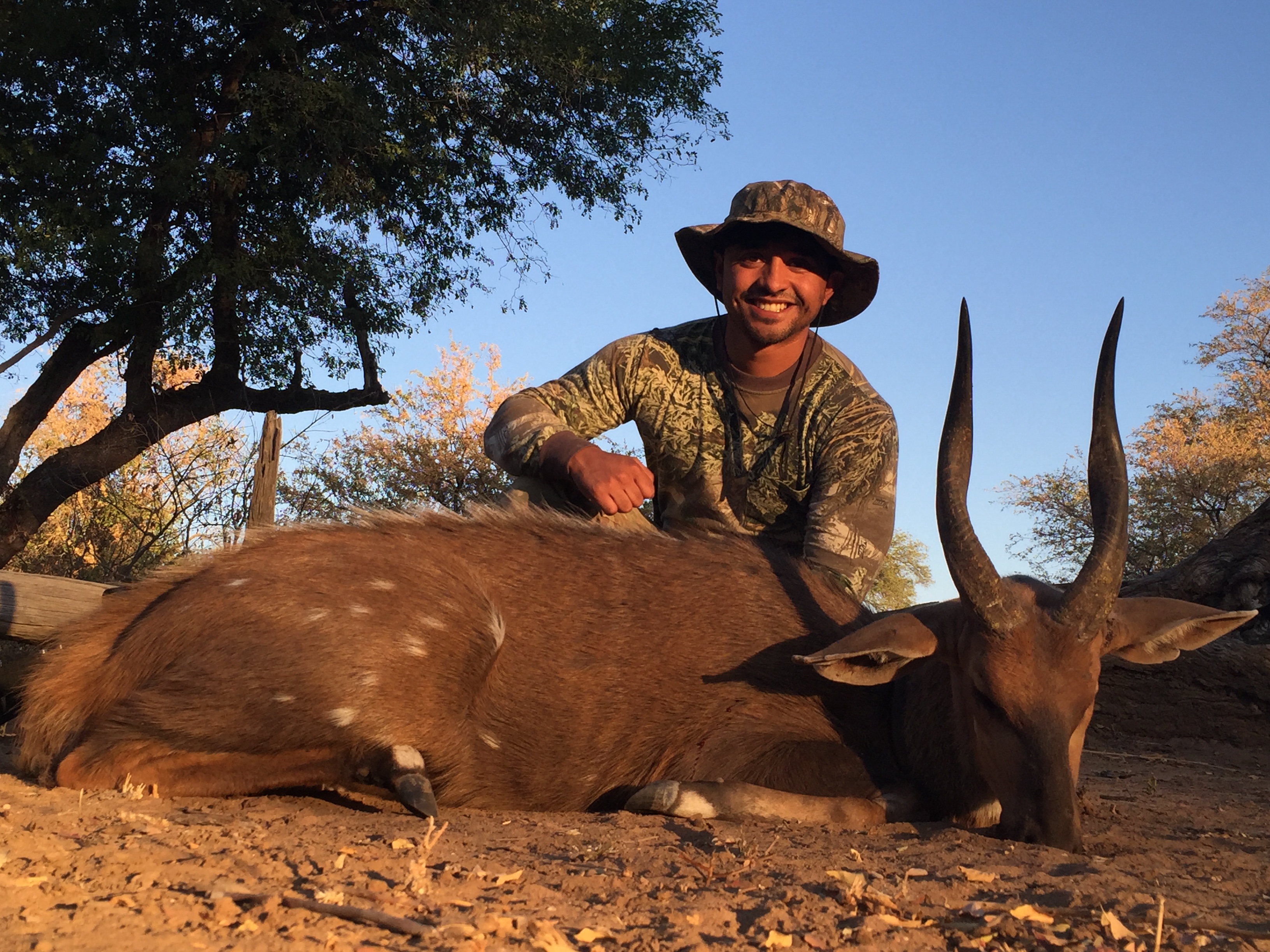 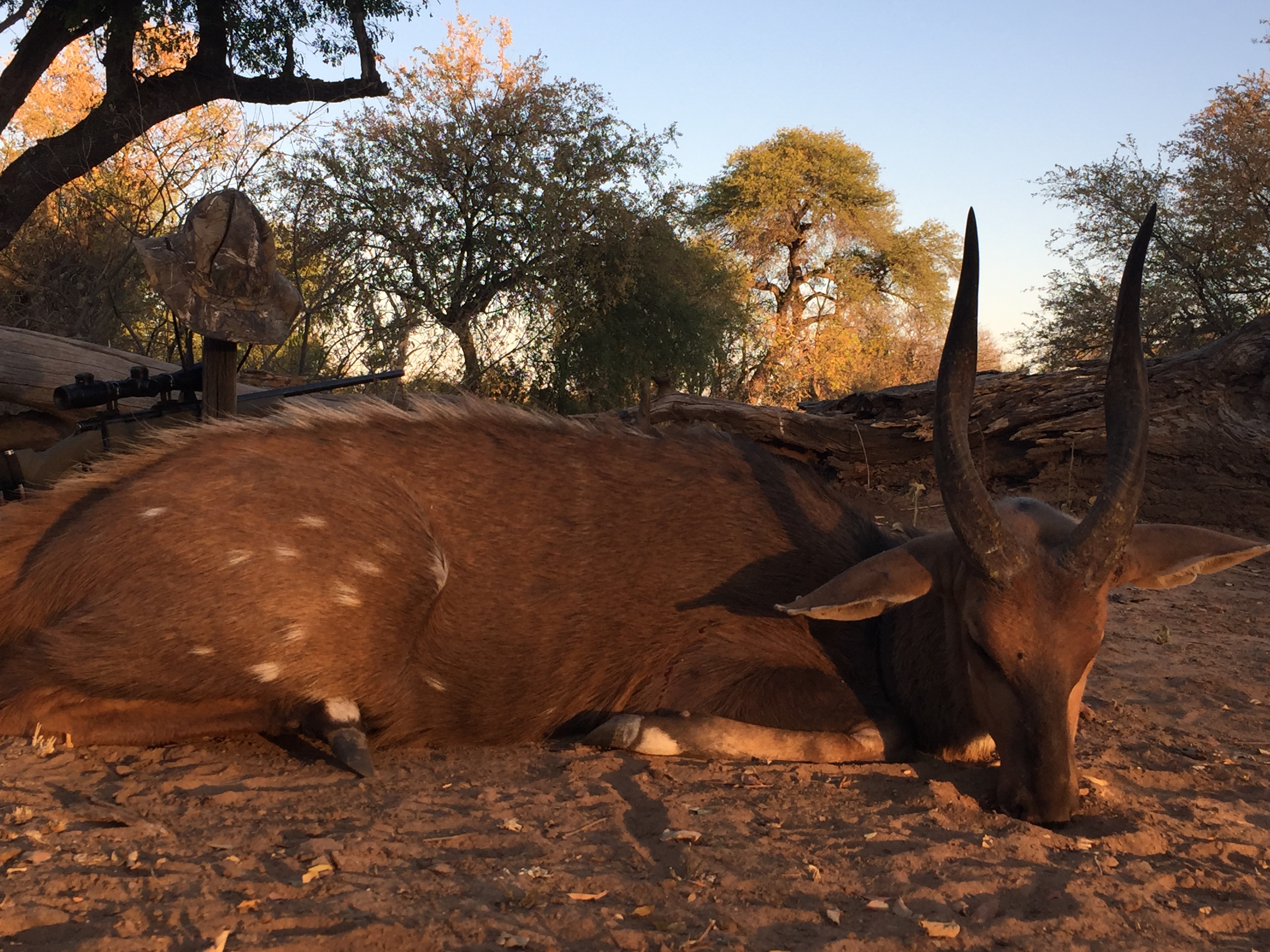 Shootist43 said:
Welcome aboard and thanks for your service and sharing your hunt with us. Nice animals and a great report, makes one think you've been bitten by the African Hunting Bug. The only cure for that bite is to return in the future perhaps with a friend. Out of curiosity what caliber and make of rifle did you use? Did you use commercial ammo or do you "roll your own?"
Click to expand...

Shootsi, I used a Howa .338 Win Mag with commercial ammunition.

Thanks for your service and sacrifice.

It was a pleasure hosting you Matt! So glad you had such a great hunt!

Welcome to AH Matthew, and congrats for a great experience.

Congratulations on the great hunt Matt! While all the animals in your photos are very nice, the kudu and bushbuck in particular are both outstanding trophies.
Nice work!

Is that a wild Boar in your Avatar? Where did you shoot it?

Thank you for sharing your report and the pictures! Great Kudu by the way!

Mat, welcome to the board and thanks for your service brother! Outstanding trophies!!!!! I'll be pushing 34 years this Mar, and will be retiring sometime next year.

Shootist43 said:
Is that a wild Boar in your Avatar? Where did you shoot it?
Click to expand...

That's actually a bushpig in his Avatar. I've posted a larger copy of it below for you. We've got a pretty good population of bushpig up on our place in Limpopo Province and he finally got his at the very end of his hunt after several very long nights of hunting. 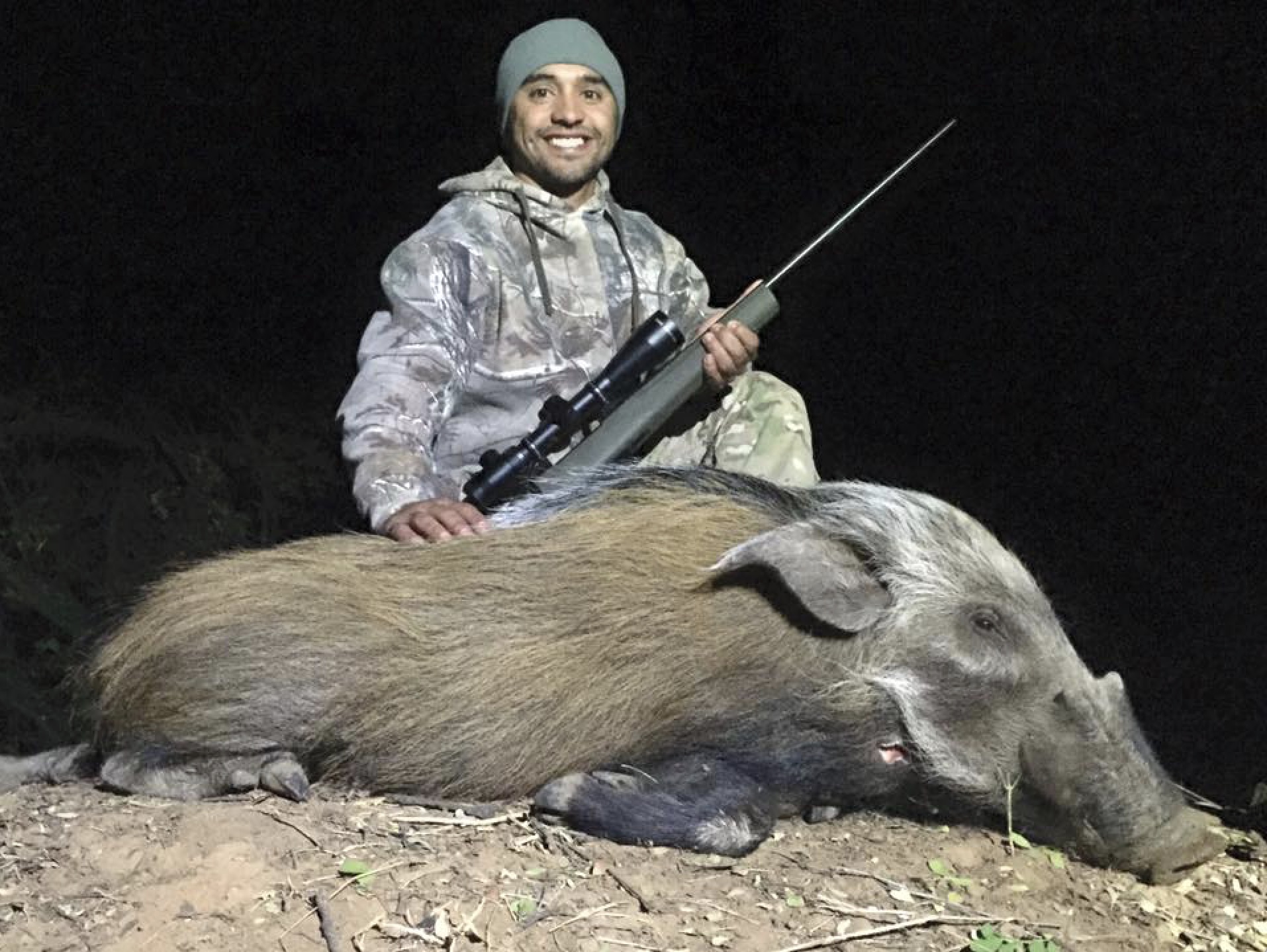 SOUTH AFRICA: A Dream Come True, A First-Timer In Africa 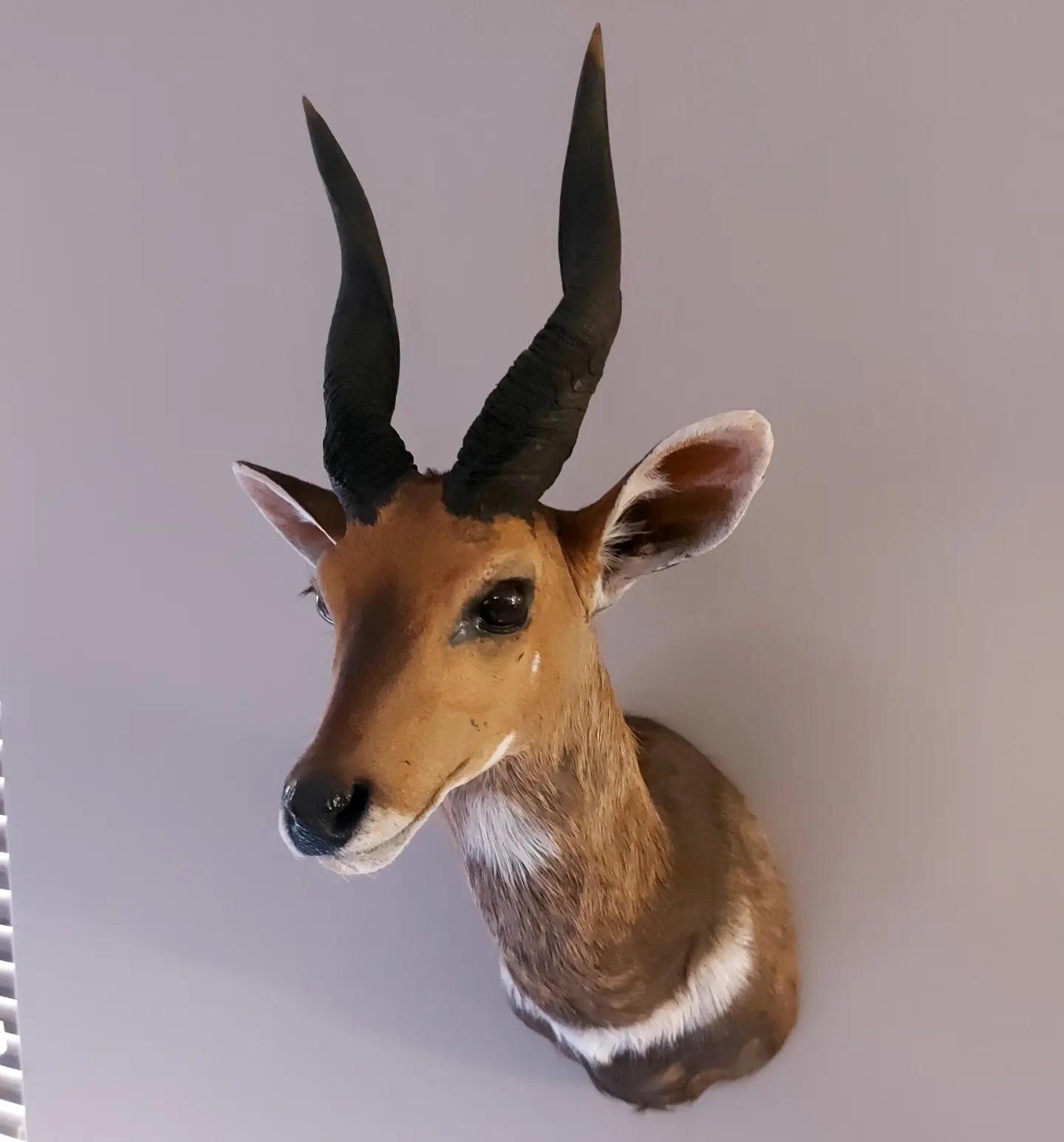