0.5 moa is all very well, but 1 moa is better if the bullet performs better when it hits flesh and bone.
in fact who can tell the difference between 0.5 and 1.5 moa on anything but a bench setup.
bruce.

1 MOA is all you need for hunting, 2 MOA is fine if you keep your shots within 300 yards. But .5 MOA is prettier
G

They are a fine bullet but a Swift A-Frame is a better bet!
N

We are really brainwashed (or maybe we brainwashed ourselves) on weight retention. 100% is necessary in some circumstances, but not in many. The 60% to 70% works for me and kills quicker for me than 100% bonded.

The partition is placed where it is for well thought out reasons. The further forward it is, the less weight is shed, the smaller the mushroom , the deeper the penetration, and, in small animals for the calibre, the slower the kill.

The only thing that I have found, is that to get maximum accuracy, I sometimes have to jump them a little more than some others.
R

It's all a gamble on picking the criteria that you want from your bullet. A wise hunter will pick the bullet that has the highest probability of causing the desired damage to the animal being hunted. the partition has very high probability factors for several situations. That doesn't mean that a situation will come up where the bullet had an 80 % chance of favorable results but the situation resulted in an outcome of the other 20 %. there are more advanced designs in bullets available now that were not available 70 years ago, so naturally these advancements give the hunter a larger selection and better probabilities for specific situations.

If you shoot thin skinned game (antelope, deer, elk) at longer ranges (400 to 600 yards) I feel the Partition is the better bullet. It will still expand out at 600 yards at velocities down to 1600 fps In general, I agree the A-Frame is a superior bullet. I would love to see the A-Frame with a solid boattail base and with a slightly thinner tapered jacket on the front half. All in all we have great bullets to chose from today. I shoot 150g Partitions in our 270s, 300g A-Frames in my 375 Weatherby and 570g TSX's in my 500 Jeffery.

My experience with Nosler Partition bullets is much the same as in the posts above. I have shot them in my .308 , .45-70, .338 Win Mag, and .45-90 and they always did their job with mostly shoot throughs and only a few bullets recovered.
The .458 Protected Point version of the Partition is most impressive on thin skinned game at muzzle velocities of 2200 fps and below. If they impact game at a higher velocity, they tend to over expand and break up. Here is a picture of a one shot kill on a large African Leopard that was eating a farmers goat. 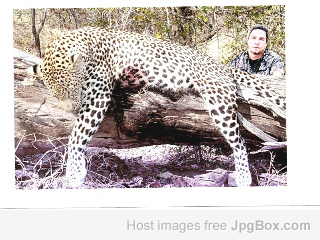 Here's a 300g A-Frame from my 375 Weatherby hit this brown bear at 13 yards. I was close enough to see blood spurt from the entrance wound before the recoil took the scope out of the field of view. Hit the bear who was quartering towards me just behind the right shoulder, penetrated the bear diagonally, bullet was recovered under the hide after passing through the left thigh. It still weighed 299.5 grains I still have it.

Beautiful leopord by the way 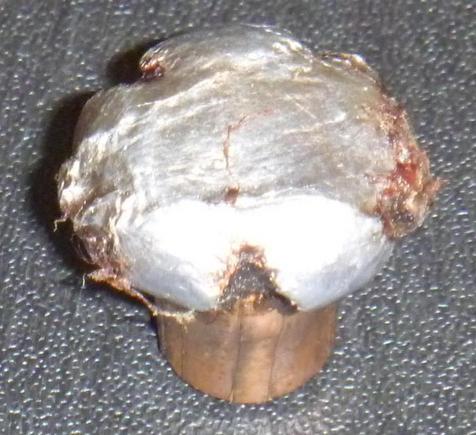 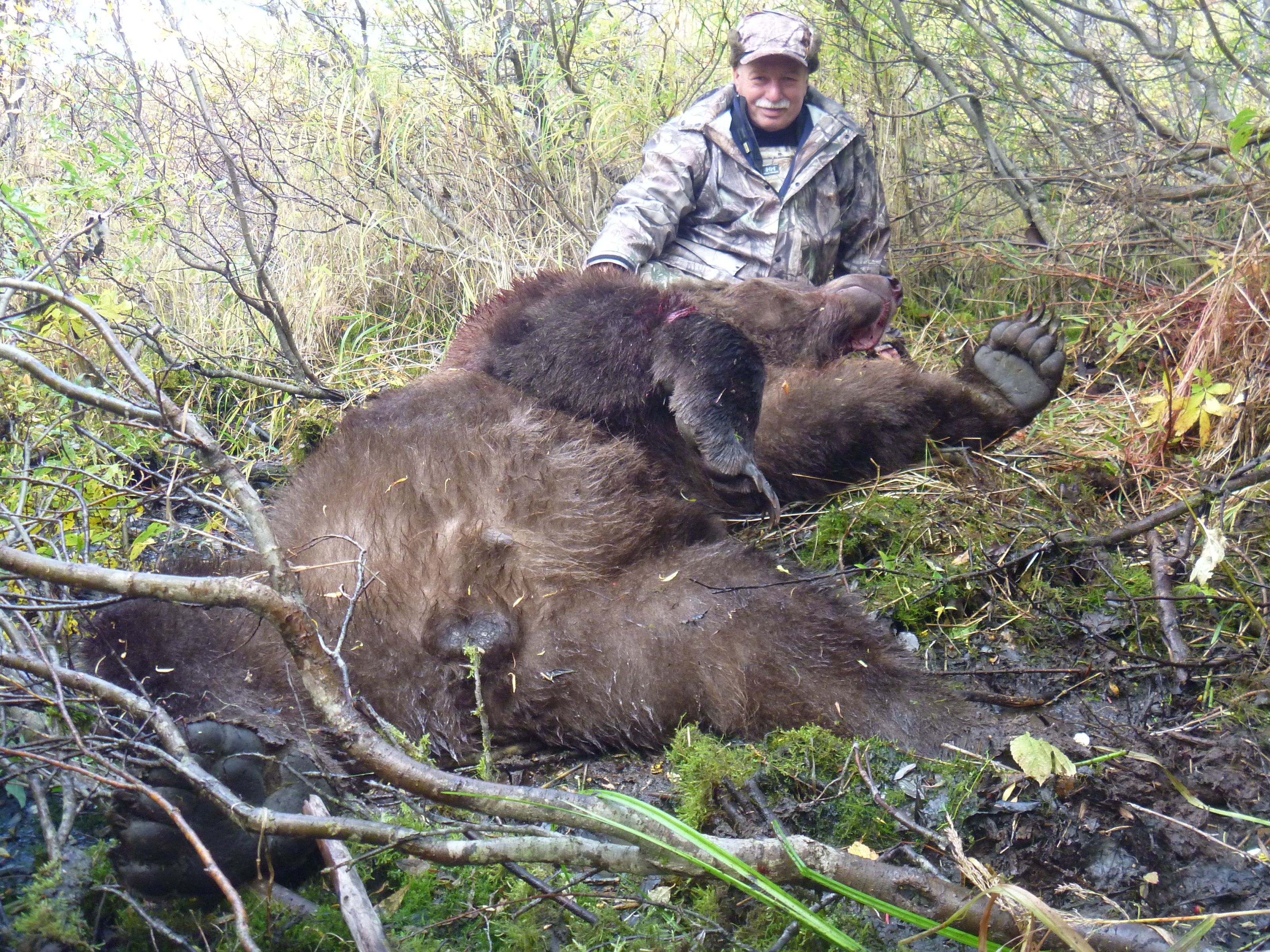 Thanks on the spotted kitty. He was lying on a decent sized tree trunk. Taken on a bullet testing outing in a couple countries north of RSA. Shot by a buddy using my 1886 45-90.

+1 on your choice of rifle and bullet for a big brown bear. Looks to have been a cool day!
CRS, NRA Patron Member, DRSS, DWWC, TSRA, Whittington Center,
Android Ballistics App athttp://www.xplat.net/

It was a great trip, even though it was about 40 F and raining every day until the morning we left ... A picture of our plane coming to pick us up the last day of the hunt 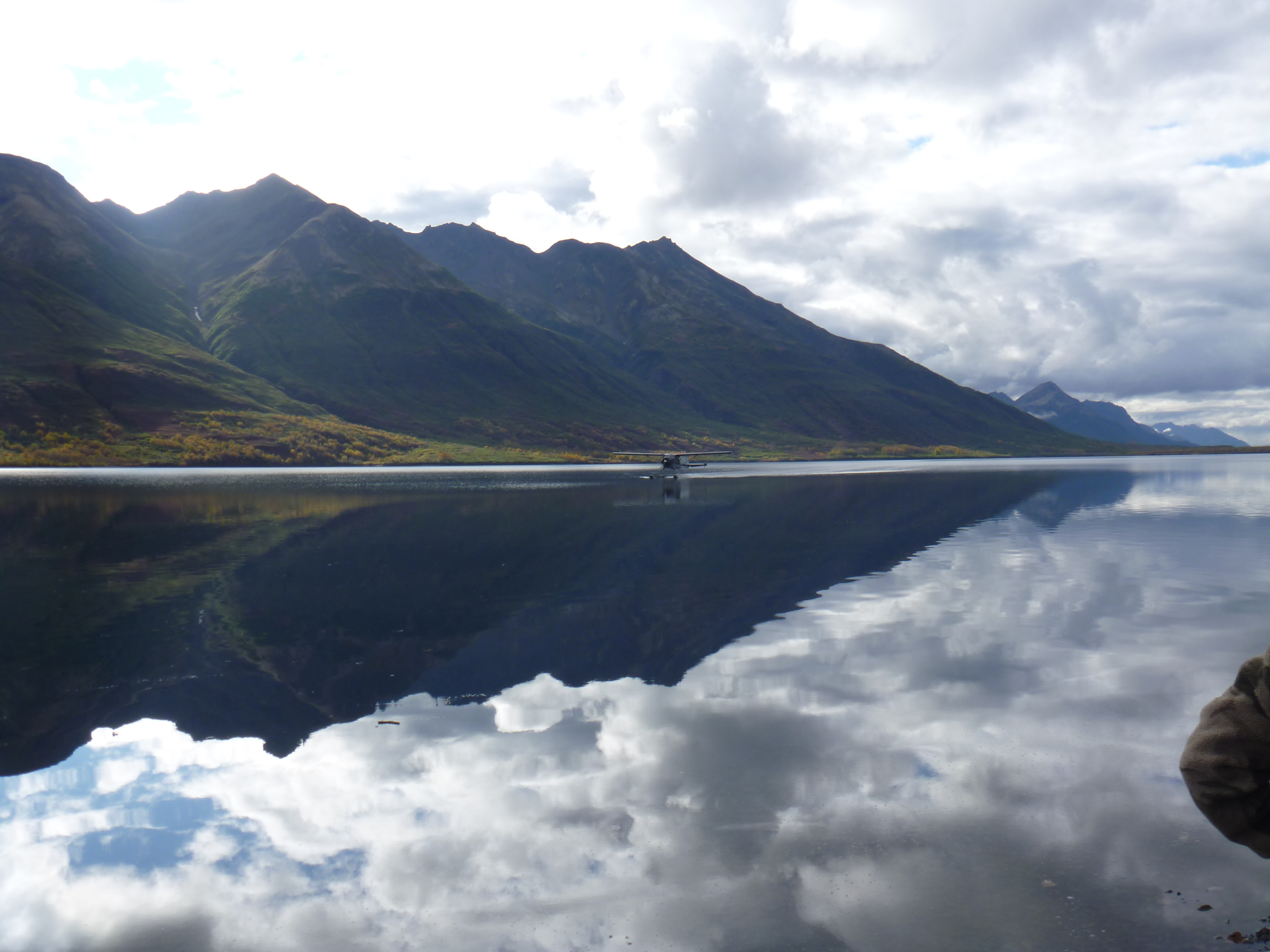 Newby said:
We are really brainwashed (or maybe we brainwashed ourselves) on weight retention. 100% is necessary in some circumstances, but not in many. The 60% to 70% works for me and kills quicker for me than 100% bonded.

The partition is placed where it is for well thought out reasons. The further forward it is, the less weight is shed, the smaller the mushroom , the deeper the penetration, and, in small animals for the calibre, the slower the kill.

The only thing that I have found, is that to get maximum accuracy, I sometimes have to jump them a little more than some others.
Click to expand...

So in what caliber do you use themand what do you set you col at? Thank you.
Life is too short to hunt with ugly guns.
B

knowing the coal is irrelevent without knowing the throat dimensions, as jump is the issue.
bruce.

bruce moulds said:
knowing the coal is irrelevent without knowing the throat dimensions, as jump is the issue.
bruce.
Click to expand...

Good point Bruce. My issue is with a short throated model 99 in 308. I will have to try loading up a couple and seating them deeper next time. See if that helps.
Life is too short to hunt with ugly guns.

rookhawk said:
I was gearing up for Africa and found these old mementos from last summer to share with you. Other people were asking about some of this info but I felt bringing it up in their threads would become a distraction from the conversation.

The picture is of a retrieved bullet from an Ontario black bear and a Greater Kudu from last June and August. As you'll note, they worked very well. I also had no defects, bolt-of-lighting efficacy on Warthog, 9 impala, 2 baboons, steinbok, and a few other animals in the past 12 months.

I share this info because I had to find out for myself why I've had such great luck and others have had such bad luck with Partitions over the years. (jacket separation, total franging, etc.) I don't believe it is luck and I don't believe the complainers are liars so I did a lot of research and some interviews on this topic. After speaking with some of the top commercial/custom loaders in the business, this is the working theory:

Bullets less than 150-160 grains and in diameters less than 7mm / .284 seem to be group A that has occasional problems with partitions.

Bullets of 7mm and greater fired from guns in the 2600-3200 fps range with high twist rates seem to be the group B that has problems.

The experts believe that the centrifugal force of the Partition at high speeds and high rotations is dislodging the jacket from the core during firing OR during initial impact resulting in these problems. They believe the .22-25 caliber partitions have too little core area to adhere the jacket too properly and the bonding fails.

For what it's worth, I'd not hesitate to use partitions in 7x57, 30-06, 35 whelen and the other calibers that push bullets at that ideal 1900-2400 fps impact velocity. The stories of bullet malfunctions appear to not apply to these calibers/velocities.

@rookhawk
John Nosler designed them to be better than the standard cup and core. This he did very well for cartridges of the time. They worked well with this cartridges like the 30 ought six and 150grain 270s,257 Roberts and others in the sub 2,900 fps. They were not designed for the magnum craze and experienced failures at the higher speeds. Kept within the original velocity parameters they did what they were supposed to do.
Bob

Bob Nelson 35Whelen said:
@rookhawk
John Nosler designed them to be better than the standard cup and core. This he did very well for cartridges of the time. They worked well with this cartridges like the 30 ought six and 150grain 270s,257 Roberts and others in the sub 2,900 fps. They were not designed for the magnum craze and experienced failures at the higher speeds. Kept within the original velocity parameters they did what they were supposed to do.
Bob
Click to expand...

My experience in 7x57 has been "hit or miss" over a large sample size since I wrote this post years ago. Sometimes the would channel is incredible, sometimes they malform and go off in the wrong direction making a difficult recovery. Its this unpredictable variability on good shots in the boiler room that make me thing there is a better way. The better way surely is Swift A-Frame, Barnes TTSX, and others.

sheephunterab said:
Let's not forget that the Partition in 1946 technology. It shouldn't come as a big surprise that jacket separation and excessive fragmentation happens with very high velocity hits. The bulk of these high velocity chamberings didn't exist in 1946. The bullet was designed for low-medium velocity hits. Each bullet has their own performance envelope and many of the new magnum chamberings fall outside that envelope for the Partition. Use a bullet for what it was designed and expect good performance.....stray outside that performance envelope and expect less than ideal performance.
Click to expand...

@sheephunterab
Not trying to be a smartarse mate. Everything you said is correct except it was 1948 for the partition when John Nosler started the company.

I’ve had good luck with Partitions. But I have questioned whether a 260 gr Partition in my 375 would smash through a big bear’s shoulder bone. On the one had I like them because they seem to penetrate well while making a big hole through the vitals. I’m hesitant to try A-Frames out of concern they’d make a smaller hole and only offer an advantage if they hit a bit bone (not as often as you’d think). Thoughts? I guess I could try a 300 gr Partition and see what happens. For reference my current load will punch through a grizzly but stop on the far side just under the hide.
N

MS 9x56 said:
So in what caliber do you use themand what do you set you col at? Thank you.
Click to expand...

With most cals and projectiles, I usually just set up for .020" land clearance and I'm GTG, Once three go into around .75, I leave it at that. In the two 30s I have had to fiddle a bit and success has come in the 308 with the two lighter NPs at around .040". The 06 is under 1" but I know the rifle will do better, so have some more tuning to do. Not really necessary to chase .5 MOA in an 06, but if the potential is there, I like to realise it. I have had the same situation with 180NPs in two previous 06s, but did not attempt to chase it. The 7 is so long in the leade that seating depth is irrrelevant, apart from making sure that there is some clearance, but still puts three under one MOA. This rifle has put three into .5 MOA with other, longer projectiles.
OALs won't be of much help to you as I have found .030 variation between chamber/throat lengths of the same cartridge, and .010 between batches of bullets seated to the same land clearance.
You must log in or register to reply here.

Why not the Nosler Partition?
2 3