Hey Bobpuckett ,i really appreciate your responses buddy. For me going to Africa is a thing i will probably only do once and i am trying to learn as much as i can about it now. I dont know if i will go with blk powder, but it is an option to me. I am having a custom .72 built. Those are great looking animals.Is that a Sharps Carbine?

Seems to me, taking on dangerous game is all about penetration, assuming a vital shot is made. Penetration is actually pretty easy to predict, its a function of sectional density (weight of projectile compared to its length) and impact velocity. (Note the word "impact".) Often overlooked, it is obviously a very important value on when boring through an elephant's skull or into a a big animal's chest.

Most bullet manufacturers publish the data for their bullets, but here's an online calculator: Beartooth Bullets > Ballistician's Corner > Sectional Density

Identically constructed projectiles of the same sectional density, when impacting an object at the same speed, will give the same penetration. Think spear vs. rock of the same weight, the spear simply retains velocity better since it will encounter less resistance due to its diameter. This is why the 500 grain .458 (sd. .341) pill will penetrate deeper than a .600 750 grainer (sd. .298). Perhaps the .600 will be adequate, but the .458 still goes deeper assuming both bullets stay intact.

Armed with this knowledge, we can compare rounds. Assuming one can impact a 900 gr .72" bullet at about the same velocity, with a sectional density of .248 it will not penetrate as deeply as a .458 Win or a .600 NE. The keyword is impact, for example according to Nosler their 500 gr Safari Solid is down to 1521 fps at 200 yards, about the velocity blkpowder50 was speaking about from the muzzle. Assuming a well-placed shot, is that adequate?

I'll leave that to more experienced hunters on the forum.

I will say, however, I spent the last week hunting with Safari Club's #1 World Handgunner in 2010/2011, Kris Johnson. I know he's taken buffalo with his .500 S&W revolver, pretty sure that doesn't have nearly the poop of your .72 smoke pole. #1 handgun lion, #1 bongo and a top 20 hippo with it as well (not sure about elephant).

I have to say, with backup, sounds like the makings of a great trip! And I'm pretty sure there's a PH out there that'll act as a true back-up, not a simultaneous fire, if you prove yourself and your rifle on some non-dangerous stuff (eland, etc.) first. They are there to get you out of trouble, not kill your animal for you unless they deem it necessary.

blkpowder50 said:
Hey Bobpuckett ,i really appreciate your responses buddy. For me going to Africa is a thing i will probably only do once and i am trying to learn as much as i can about it now. I dont know if i will go with blk powder, but it is an option to me. I am having a custom .72 built. Those are great looking animals.Is that a Sharps Carbine?
Click to expand...

Can't really say, that is what I was told it was in a 54 Cal this was another hunter and his son.


blkpowder50 said:
i will probably only do once
Click to expand...

:rofl: Thats what I said several safaris ago! :laughing:
Enjoy Life Now! It has an Expiration Date.

Hi BP for the past 4 years I only hunt with blackpowder in S.A. I use a inline .50 calibre rifle and I must tell you this is the most
satisfying hunts I even had, even sold my nitro guns as they never gets used anymore. If I get a broadside chance on a buff I would not hesitate to make the shot (with backup by PH). As I saw the penetration of this bullets.

At the moment I am in the process of getting a .62 forsythe cusom build inline ball shooting rifle done by a gunsmith in the karoo, can't wait to see how this will perform.

You know pedersoli makes a 72cal double black powder just thought you might give it a look first.
Amon458

Hi Flatwater bill, Unfortionatel I lost my job and battled to get back on my feet again. Things have changed around now and the built is on again. The iron work is finished and by end of January the stock will be finished as well, so this winter it will be tested properly in the bushveld as well as in the Kalahari.

This E land was taken earlier this season with a blackpowder rifle, a one shot kill. 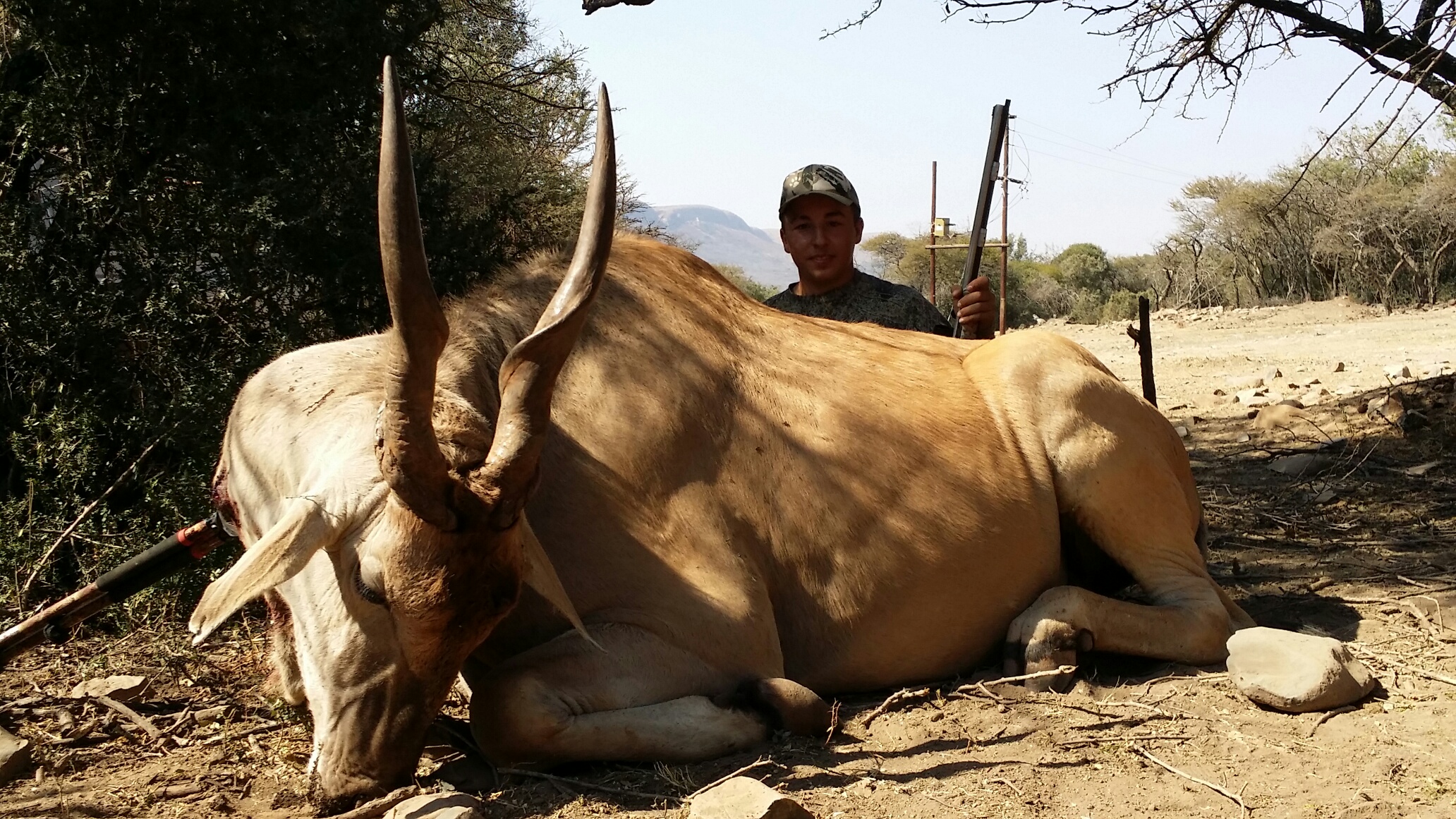 I think hunting cape buffalo with a muzzle loader is a great idea. however I don't think a 72 caliber gun is the right choice. as pointed out the 900gr 72 caliber bullet wont have a very high SD and at 1400fps its not moving fast either. you would be better off with a black powder double rifle in 50 or 54 caliber using extremely heavy conical bullets. (the double rifle would allow for a follow up shot)

-matt
Last edited: Dec 26, 2014
"A buffalo could probably be taken with a well placed frozen herring but, the question is: "What's the point"?" -Velo Dog
M

I have never taken a cape buffalo, but I have taken an American bison with my .54 cal Hawken using a .54 cal T/C maxiball and 110 grains of FFg. My experience was that on the first shot, I thought I had missed, as I saw no reaction from the animal. On the second shot, the animal gave a mighty exhale, and aerosoled blood came from the left chest, so I knew I had hit it......but it just stood there, as the other bison milled around, licked at the wound, and in general got a bit aggitated. I managed a third shot and shortly there after the animal started to stagger, walked off a bit, and fell over a small cliff and THEN expired! When the animal was butchered back at the lodge, we found 3 bullet holes in the left side within about an inch of each other (my first shot had hit the animal).......my shots were about 50-60 yards.
For those who think that these animals are just "big cows", let me tell you this.....I have seen
more guides treed by these animals on hunting preserves than any other, including wild boar. They get ornery just by having someone "nearby", so I don't consider them push overs.
Can you take a cape buffalo with a black powder rifle? Most definitely!!! Is it a wise idea.......maybe not, esp. if more than one animal is present.
The other question is: How fast can you reload if your P.H.'s gun fails to fire?
Here is a photo of my bison: 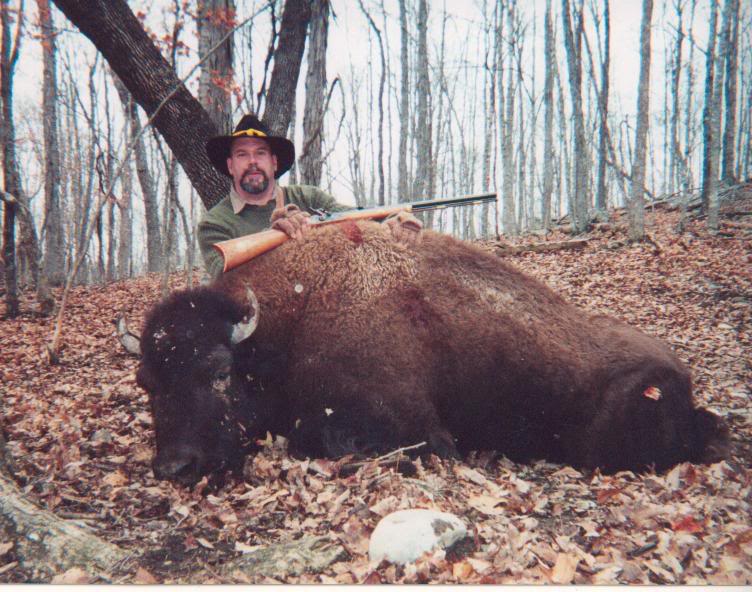 "If your dog thinks you're the greatest, don't go seeking a second opinion!"

if you really wanted to use a 12 bore muzzle loader then you will need a conical bullet of at least 1090 grains at around 1400+ fps. even then I would avoid any shot but a broad side.

to put things into perspective, the 700 NE fires a 1000gr bullet at 2000 fps. even at this weight/speed there have been reports of this cartridge failing to properly penetrate an elephants skull. from just about every person ive talked to whose hunted both elephant and buffalo, they stated that buffalo are tougher to bring down then elephant.

the point is, while the energy might be good the SD is too low on many of those large diameter bullets. the larger the bullet the tougher it will be to get proper penetration. I never thought id say this but... there is such a thing as too large. (don't tell Royal27 or ActionBob I said that!)

Back in the days of the empire, the 12 bore rifle was considered a stag or light PG rifle. And, the black rifle powder then available was actually better than what we now have. Dangerous game rifles began with the eight bore. Nitro cals took the world by storm at the turn of the century for a reason.
"We sleep soundly in our beds because rough men stand ready in the night to visit violence on those who would do us harm" American Novelist - W. Churchill

Ha! got ya in print Matt!

As for Cape Buffalo, from my one (so far) experience, they are not at all comparable to a Bison. We have some Bison raised near us, even though I've never shot one (yet at least), I know guys have shot them with deer calibers and have them tip right over..... Now not meaning to diminish our N. American "buffalo", but cape buffalo just do not accept that they should die that easy! I'm sure you can kill one with a muzzle loader "if" it is really important to you and everything is just right. I think you would want to do it where you have lots of room for follow up or at last where a well placed shot can do it's job without losing the buffalo. Of course if you hit the heart the moment it is filled with blood, you might get very lucky and drop him there. But don't count on it. AND accept that the PH or someone may need to back you up with something more powerful......

My elk rifle is a 12 bore underhammer round ball gun. It shoots good with 190gr of 2f and a patched round ball. I have a 8bore that is on the shelf waiting time for me to finish. In the muzzle loader and bore rifle era the 8bore was basic dangerous game rifle. Kinda like the 458WM of today. I am going on a cape buff hunt this year with my 450NE double. I asked about using the 8bore to several of the PH's I was interested in hunting with. The biggest problem is the amount of lead time they need to secure the black powder and caps. I was looking at taking nipples for #11, musket, caps and a 209 primer adapter so no matter what they had on hand or could aquire I would have something that works. They said they could get the inline kind substitute powder, but not my cup of tea. So I bagged the idea of cape buff with a muzzle loader. Having seen what a 12 bore round ball will do game I would think that your heavy conical would do the trick, just need to make sure that you wait for the best shot for heart and lungs keep shots under 50 yards and miss the shoulder. Please take that with a grain of salt as I haven't shot mine yet so have no practical my eyes on target experience yet. You might also consider taking a modern DG rifle and test your 12 bore on a zebra or cape eland before you take on a buff. and Decide once you have results on a tough large animal
You must log in or register to reply here.
Share:
Facebook Twitter Reddit Pinterest Tumblr WhatsApp Email Link