Letter: Coalition of tourists appeal for end to hunting outside Kruger

***sigh**** sometimes I feel like our sport is in a loosing battle against these people.

Tourists Against Trophy Hunting, a recently formed coalition of tourists opposed to hunting, has written to the Associated Private Nature Reserves (APNR) appealing to them for an outright ban on hunting in the area. The membership of just over 200 includes conservationists, ecologists, writers, photographers, advocates, activists, tourists and travel agents and travel bloggers from countries including Germany, UK, Canada, the US, Brazil and South Africa.

The open letter is reproduced, verbatim, below.

Kruger National Park is one of the largest protected parks in the world, and one of the most visited in South Africa. But many who visit are unaware that private game reserves with open fences to the boundaries of the protected park regularly request and receive permits to trophy hunt. Or that hunters refer to the Kruger as "the factory". The Timbavati Game Reserve has called this ongoing controversy an "emotive" issue. Others have called it a loophole that must be closed.

We the undersigned are an international coalition of tourists who view wildlife as sentient beings rather than resources to be utilised. We call upon the Associated Private Nature Reserves (APNR) of Timbavati, Klaerie, Balule and Umbabat to support a total ban on trophy hunting within the area.

SANParks is entrusted with the protection of wildlife, most recently by the Protected Areas Act of 2004. But since 1993, when park officials agreed to remove the boundary fences, animals have moved freely between the areas. This would be a good thing if hunters were not waiting on the other side. Tourists are told hunting is prohibited in Kruger. But as wildlife status changes from publicly "owned" to res nullius, instantly they become fair game. Shockingly, park employees also sit on management committees of these reserves, and help to decide the hunting quotas. Are the abundant APNR waterholes where tourists view animals drawing animals over? Is this any different than luring a lion with bait out of a "protected" park?

The recent Timbavati Reserve hunting quota application received much worldwide media attention due to the inclusion of a "trophy" bull. But it also included 33 other elephants, and more than 5 000 animals including endangered species in the four APNR reserves. Throughout this latest controversy, SANParks and all government officials have been evasive about what was approved. As of a week ago, four elephants had been killed, along with one rhino. We can presume many more from the list have by now been "harvested".

Any call for a tourist boycott at this time would be counterproductive. But more travel agents are choosing not to book in the area unless it is to Sabi Sands, where a hunt ban is in place. It is unacceptable for tourists to share space with trophy hunters, knowing an animal admired, enjoyed, and photographed one day can be shot the next, to become a wall mount or a floor rug.

Trophy hunting is undergoing widespread public scrutiny. People are aware through international headlines that many species are critically declining in numbers. Polls show a majority of tourists are deterred by knowledge of trophy hunting in areas they visit.

If in any doubt of that, look on Trip Advisor at the responses last month to the Timbavati permit request. We include just three of many:

"Should we start a petition on Avaaz? Many international residents would avoid Timbavati if they knew the reserve allowed some hunting areas where endangered animals are hunted."

"I honestly think that people in the wider community, particularly outside of South Africa, haven't a clue that this is happening. I suspect it would not be viewed favourably, I suspect that people....who book with non-hunting lodges in these neighbouring reserves would be appalled that hunting is taking place on the same reserve."

"That is shocking! I will not encourage people to visit it {Timbavati} anymore."

It is time to recognise the hunting industry claims of support for conservation and local communities are not evidence-based. Wildlife watching tourism, as the United Nations World Tourism Organisation (UNTWO) reports, has a return of 80% of the total tourism revenue in Africa. Trophy hunting not only fails to provide a significant benefit for the overall revenue of range states, but threatens ecotourism revenues. It is an unnecessary additive to other pressures, further depleting populations as the "best and the biggest" are killed.

Ethics-based approaches to wildlife conservation are available. The public majority are not hunters, who do not "use," but rather respect and appreciate wildlife, and who have deep concerns about continued survival of iconic species. They are now demanding responses proportionate to their majority status. As a local SA travel agent has said, her clients will happily pay a conservation fee to support survival of the animals they come to visit.

We therefore ask you, the owners of the APNR lodges and stewards of the lands, to join our effort to protect the wildlife of Kruger National Park wherever they roam. Please support our call for trophy free tourism.

I guess they'd rather have poachers and cattle surrounding and encroaching on Kruger than controlled hunting! That is what you will get if you ban trophy hunting.
Morons!
Philip

Since hunting isn't listed under their severe threats I'll assume we're covered by "over exploitation", which likely includes poaching since that is also not on the list. Its always dangerous when the ill informed get up in arms about a new cause.

Philip, you nailed it with the very last word!
Growing up in close proximity to Glacier national park and now my place is near Yellowstone park, I often thought of starting a coalition to ban tourists! Pretty sure I could get 200 undersigned quickly! Lol
Hank Williams Jr. had a great song called coalition against coalition.
Cheers,
Cody
"Montana seems to be what a small boy would think Texas is like from hearing Texans" John Steinbeck

@Bullthrower338 it's not a bad idea, start a petition to boycott the lodge or ranch that supports tourist against trophy hunting. I really hate petitions but for some reason it seems to get people's attention.

Wow. Their group has over 200 members!!!! I'm sure the revenue these 200 whole people generate is definitely enough to make a difference.

Collectively they bring in less money for conservation than some hunters do individually.

JKT said:
.................
Tourists Against Trophy Hunting, a recently formed coalition of tourists opposed to hunting, has written to the Associated Private Nature Reserves (APNR) appealing to them for an outright ban on hunting in the area. .................
Click to expand...

As soon as the crying throng guarantee the annual income from hunting for the next fifty years (in advance) they might have some success in convincing the owners to change their mode of operation.

Here is the "buffer zone" around Hluhluwe-Imfolozi Park. (There is not a buffer zone by the way)
You guess which side of the fence is park and which is outside the park. I've helped by marking one of the entrances. 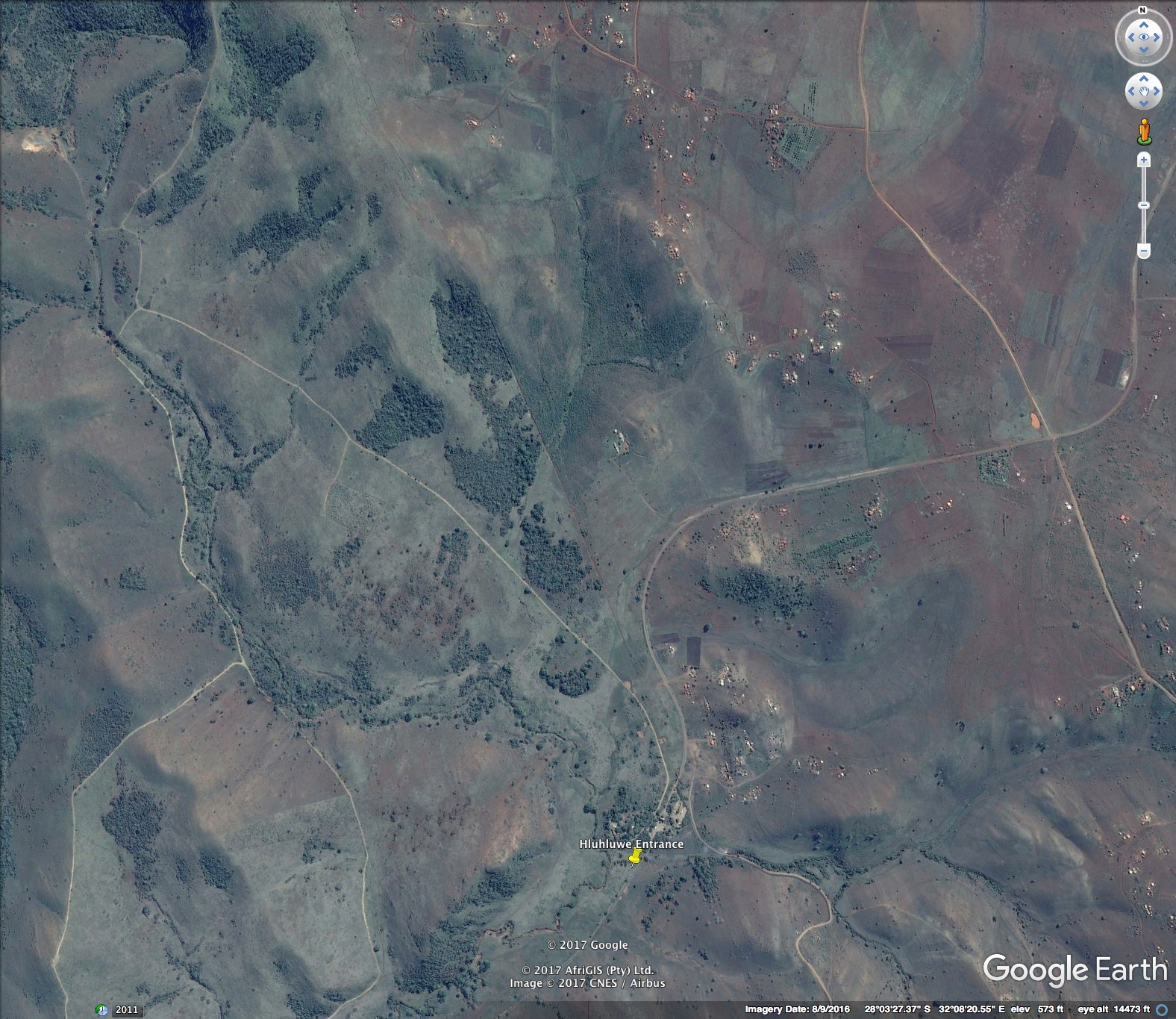 I wonder if this enlightened group is aware that rangers in parks cull animals to help sustain a healthy population? But I guess they rather get some good pics of starving animals and destroyed habitats.

More opinions from the uninformed. These tourists which many are bloody liberals should go back home and worry about their own borders which have become the gateway for terrorists. Though well meaning by "their way of thinking " fact is wildlife if allowed to be governed by the antihuners would be disatreous. Kenya is a shining example of this but yet the liberal media and groups that support banning hunting never speak about that. Why? Hippocrates to be kind. Any of you antihunting a holes surfing here I say this to you. Shut the hell up. Because you will be the problem for the future of wildlife.
Tommorow is promised to no one. Go live your dreams.
J

For more detail see the link:

Ask yourself how important is tourism to the Timbavati and in a larger context to the APNR.

Yes, but when have Anti's ever let facts get in the way of their never ending assaults on hunting.
There are many degrees of wounded . . . there is only one degree of dead

First of all they view wildlife as "sentient beings"

Then they just don´t have a clue as to how many animals of each species can the KNP support, but thy don´t care about facts, they just voice their emotions.

For more detail see the link:

Ask yourself how important is tourism to the Timbavati and in a larger context to the APNR.
Click to expand...

Great point
Tommorow is promised to no one. Go live your dreams.
M

I wish they'd sell hunting tags for these bunny hugging tourists. I would be a joy to visit the park and collect one of the overweight crustations.
G

Do the staff at Kruger in any way inform about the need for hunting/culling? I can see why some tourist wouldestination be easy to convince to sign this BS...

Anyone just reading/watching western mainstream media has learned all animals in Africa is endangered, all natives are poor, sick and uneducated and white man is to blame. There is a big industry that needs this to be the "truth".

I wonder where the "statistics" quoted by the UNWTO are from? Doesn't make much sense from the op quote.
It'not the years, it's the mileage......(Indiana Jones)

Michael Dean said:
I wish they'd sell hunting tags for these bunny hugging tourists. I would be a joy to visit the park and collect one of the overweight crustations.
Click to expand...

Candidly @Michael Dean, you sound like one of the antis when they make their vile remarks and wish death on a hunter.

If you truly believe your own remark, you're no better than they are.
HUNTERS make importation bans work!

GuttormG said:
o the staff at Kruger in any way inform about the need for hunting/culling?
Click to expand...

They would likely tell you if you asked, but I doubt they would proactively offer.
HUNTERS make importation bans work!
You must log in or register to reply here.

Tanzania lifts ban on hunting for trophies and bush meat