-whats the best place to hunt hyena?
-whats the average trophy fee?
-how do you judge a good hyena?

also any pictures you have from you hyena hunt would be nice!

thaks
-matt
"A buffalo could probably be taken with a well placed frozen herring but, the question is: "What's the point"?" -Velo Dog

When I was in zim. They were shot at night with a caller. (Deka) they were like 750 or so if I remeber correctly. And they were judged based upon size and fluffiness of the coat. The fluffier the better for heyena trophies
-"You don’t hunt turkeys because you want to; you hunt turkeys because you have to." —Tom Kelly
-“Look deep into nature, and then you will understand everything better.” — Albert Einstein
-"Accept the challenges so that you can feel the exhilaration of victory." George S. Patton

Hunted my Spotted Hyena in day light, spot and stalk.

Judging them.... not really for me.
Saw one big enough and made the decision.

Winter time in RSA helps ensure they are a little fuzzier.

Depends on if you are talking spotted or brown hyena... Both can be taken via various methods which includes calling, building a hide over bait, and spot & stalk. Spotted hyenas are more often encountered in packs, while browns are solitary or occasionally encountered in pairs. Spotted hyenas are found throughout Africa, although rare in the Limpopo area. Browns are much more common for us.

thanks @Limcroma Safaris, if brown hyena is not exportable then that puts them off the menu. i want to be able to bring my animal home.

I had a huge brown hyena in my scope last year on bait. I said "click" and let it walk. I'm still looked for a spotted!

This was actually an interesting and different hunt in Zim for spotted.

So the method was bait and blind, but you didn't sit in the blind. You snuck to a three sided blind right at daylight with the idea being that the hyena was already there and you shot it as soon as you got there. All I saw was some silly lions....

It was quite successful though for everyone else. I was the only one in camp that didn't get a shot while I was there. They had a LOT of hyenas....
HUNTERS make importation bans work!

Still trying after like 4 tries! Afraid its one of those things that if you don't insist on your PH getting serious about it, they wont. I note no one answered about trophy fees. Expect to pay at least $1000 and up for one if you are lucky enough to pot one. It will be number one or two on my list next time out.

Matt, here's the one we took last year. 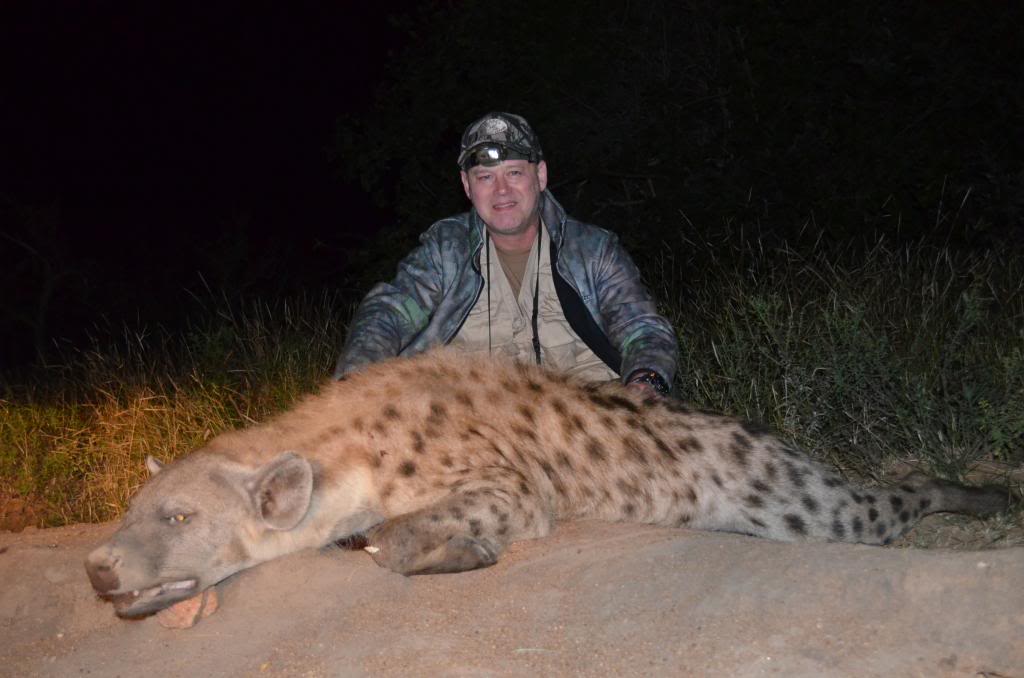 Hyena: Scavenger or Predator? The Human Influence on Hyena & Lion