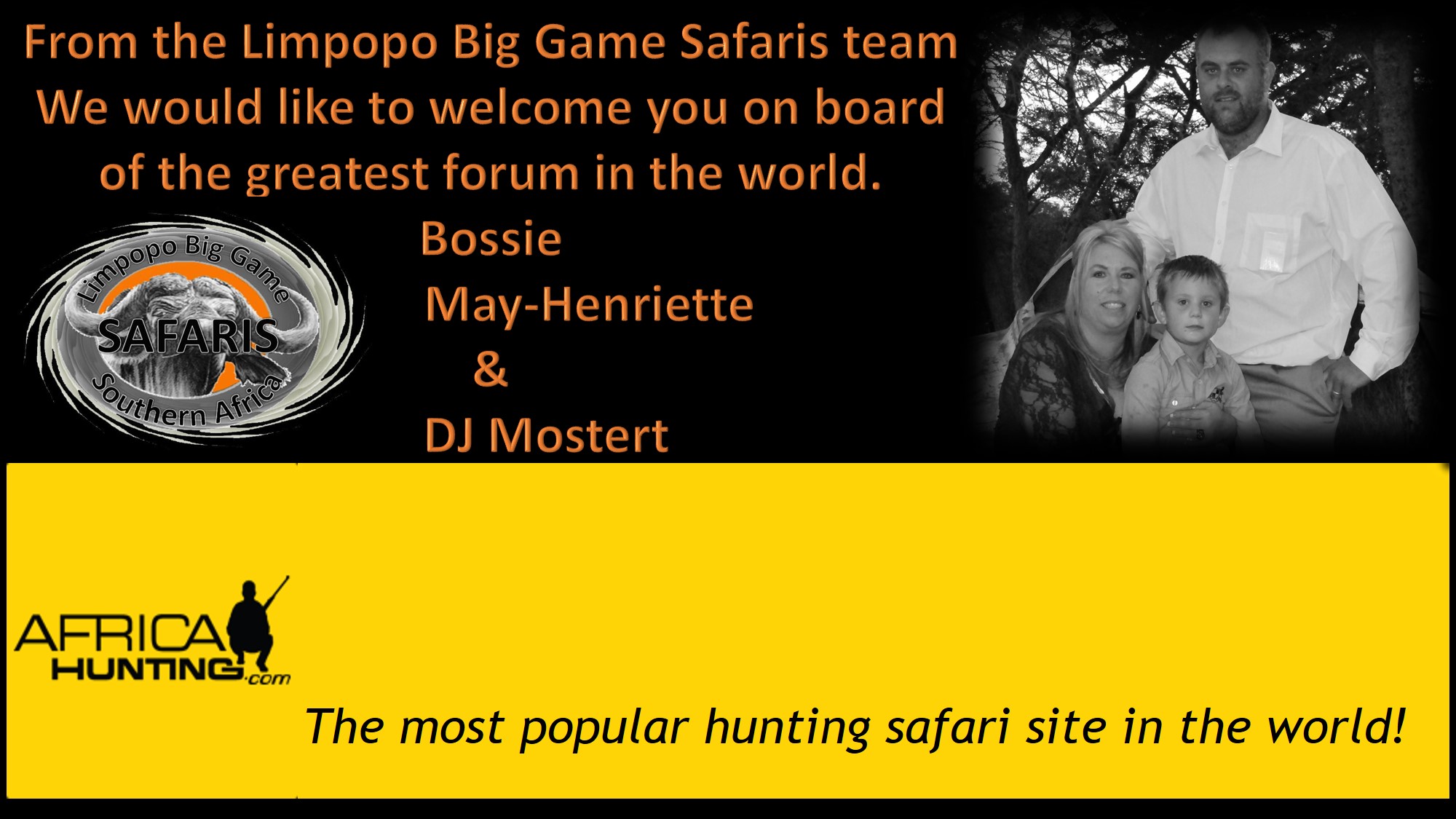 Travis, well done on an excellent addition to your firearm cabinet.

The .375 would be close to one of the most useful, practical and versatile caliber going around.

I bought my first .375 more than 25yrs ago and have not been without one, or more, of them ever since !
One particular .375 I had was used by more than forty clients of mine to take trophy buffalo bulls with and more often than not it only ever took one or two well placed rounds.

Over the course of my twelve years of guiding buffalo hunts the .375 has averaged less rounds required on average per buffalo than larger 40+ cals !

Both myself and a good buddy of mine have both had excellent performance on buffalo, and other game, with both the 270gn and 300gn Barnes T.S.X's, if you are going to reload.

The Winchester you purchased is my favourite current production factory sporter.
You have a fine weapon chambered in an extremely useful caliber.

Welcome to AH. Beautifull rifle you got there and a great all round caliber, have not been without a 375 in the safe for 20 years now. You picked a great rifle and caliber for your first safari. Happy Hunting!!!

Congrats on the purchase, it should serve you many years!

One of the best rifles and calibers of all time!

Congrats. It is a neat burst of excitement that comes with the discovery of its manageable recoil and its inherent utility! Have fun. Report back often!
"When my friends tell me that I have led a remarkable life, I have to admit having done my best to make it so" - John Kingsley-Heath

.
There are good days, bad days, and days like today!

Most PH's seem to prefer that their clients shoot buffaloes between about 30 paces to about 80 paces, if that helps you choose your scope at all.

Also, I have not been on many hunting safaris to Africa but of the ones I have done, I did not need anything more than iron sights through only 4x scopes, for everything including very small antelopes in the very open desert of Namibia, through my one cape buffalo, just outside of The Kruger Park.

At the end of the day, whichever PH you choose is the perfect one to consult on scopes and generally all equipment for Africa.

I am going through the same considerations, glad to see I am not alone lol. For whatever it is worth, I am guided by the thought that I never have my current Nikon 2.5-10x scope dialed past 4x when in the field (30-06), and this 375 caliber is useful for Buffalo, which we will shoot at a closer range than any moose, boar or deer. I am looking at a scope with a minimum 2x (saw a Zeiss 2-7x) and I figure I will never use anything in the 10-12x range except maybe to zero it. (While I fully intend to take it coyote hunting this winter, it isn't it's typical use lol).

I am also seriously considering a low power with an illuminated reticle as it will suit my typical use, future use, and the illuminated part may be beneficial when up close with something that is scaring me! All the major brands seem to have a version of this with a reasonable zoom.

I am very interested in what you go with so please keep us informed. If you make a decision first I will just copy you (Note to AH, I don't seem to have smilies despite the fact that I am on a windows 8 laptop just now. I should note that at this stage that I am beginning to take this personally and I feel excluded. I think there may be a discrimination lawsuit in the making - to the reader: please see a laughing smilie here)

When you look at the scope, do you think the larger objective makes a difference for the magnification range you typically use?
"When my friends tell me that I have led a remarkable life, I have to admit having done my best to make it so" - John Kingsley-Heath

See that's my problem when deer hunting my rifle stays on higher powers never low. So The thought of 6x being my max worries me lol. But at the same time if I will only be shooting within 100 yards in Africa im fine with that. But as velo said clients usually dhoot between 30-80 yards 6x is plenty? confused!

6X really should be good for 200 yds plus. I have taken just a few at deer in the 300 to 350 yd range. It just takes shooting practice to get use to it. Unless you are using a bench it's hard to use high power in the field, there will be too much shaking and it will mess with you trying to take a shot. A lot of shooting is mental, believing what you see in the scope is good and pulling the trigger, (you don't want to over think things, then the shakes start).

I put a 1.5 - 6x Zeiss with illuminated dot on my 9.3x64 and absolutely love the glass.
I also have a Zeiss 2 - 8 on another rifle that would also be a good match for this class of firearm.

For me, with my eyesight, this power range suits my intended uses and enables me to be able to place my shots on medium to large soft skinned game out to 250yds, with a steady rest, if I need to.

I think the scope range/type that suits best will be accorded to how good/bad your eyesight is and also what you are accustomed to using previously.

Welcome to the club. 375 crack leads to bigger toys For a scope 5 or 6 power will get you to 300 no problem. I always start off on lower 1.5-3 power because if you need higher magnification you will have time to adjust your scope but if you need less, there never is enough time before game heads out a mach III.

Congratulations on your new toy.

Leupold VXR 2x7 IR is what I use. Plenty of magnification at 250 yards.

PHOENIXPHIL is giving you good advise on mounts to get the scope back to proper eye relief. I would recommend taking your rifle into a store and seeing where the rings would hold the scope. Some short scopes with a large objective lens won't fit well and give good eye relief.

Right that's done it!! I'm gonna have to put in for a 375 H&H. See what the police have to say when I put in my covering letter as to why I want one!
The Empire was built on cups of tea. When in doubt, fear, joy or any other human emotion tea is to be drunk.

See that's my problem when deer hunting my rifle stays on higher powers never low. So The thought of 6x being my max worries me lol. But at the same time if I will only be shooting within 100 yards in Africa im fine with that. But as velo said clients usually dhoot between 30-80 yards 6x is plenty? confused!
Click to expand...

Not being a variable power scope person, I type the following with some fear and trembling in my fingers:

Since you mentioned that you like to use plenty of magnification when deer hunting, it sounds to me that you might be best served by a 2 to 7x variable or 3 to 9x variable for your .375, because 4x is plenty for most African game hunting conditions in general, but especially for buffalo hunting.

Variable scopes work great for those who are not easily distracted.
But, for goofy dudes like me, I have tried same and experienced failure (mine, not the scope).
More than once, when I was young here in The Sates, I had forgotten to turn my scope down so it would focus up close, then some critter leaped from cover and back into cover at close range, before I could find it and put a crosswire on a vital spot.
I'm better off with a simple fixed power scope.

My favorite PH has at least one rifle with only iron sights on it (.458) but also a couple (.30-06 and 7x57) with 3 to 9x scopes on them (he prefers the standard Zeiss Conquest model, in 3 to 9x)
Now when I borrow his plains game rifles, I just leave the scope on 4x, because that is about as good of a compromise for close range and longer range that I can think of, within reason.

A scope is definitely a good investment for a buffalo rifle because sometimes you cannot see clearly any fine sticks between you and the animal without a scope.
Even a very thin/feeble twig can throw a powerful/heavy bullet three feet or more off target, not to mention that it can also cause a bullet to tumble and impact sideways or even backwards.

I have only take one buffalo (shown in my avatar here) and it was with iron sights but my best guess is that a 6x scope might be too much for some buffalo hunting conditions (for some plains game situations as well, such as bush pig, nyala, bushbuck, etc).

Old Zeiss 4 x 32.
Cheers Witold.
You must log in or register to reply here.