Electronics travel ban to the US

rookhawk said:
Here it is, plain and simple:

It takes time to clone terrorists hard drives so you can do forensics on it undetected. Only way to get the devices away from the bad guys is to make them check the bag. Thus, there is a guy in the belly of the plane from foreign intelligence cloning hard drives of suspects before the plane lands in the USA so the perp has no idea it has happened.

That's it, that's the story. No other story is plausible as to why it would be done inbound only from the middle east.

Saying its because they can make non-metal undetectable bombs and detonate them in the air is a smokescreen. You're no less dead if the bomb goes off in the checked baggage in the belly of the plane than you are if its detonated as carry on.
Click to expand...

Rookhawk,
Very interesting thought. I have been scratching my head as to how the computer bomb would work as a carry on and not I checked baggage and I can't justify that thought. I'll go with your idea especially due to the timing of Trumps travel ban that the Obama judges keep stopping from being implemented. I am afraid we have lost out country if our duly elected President can't put in a simple 90 day moratorium of visitors from terrorist countries! Watching the news you would have thought the world was coming to an end with the travel ban.
Regards,
Philip

So they break it open and it's just a pair of binos and a bore snake and a GPS and a picture of a naked gorilla that looks like Gene Autry. Now what? Should they go to the store and buy new locks for which you won't have the key? They can't let it fly without locks.

It's pushing your luck to put non-guns in a gun case. It's not supposed to be used as a carry all and it will eventually result in a big problem.
Click to expand...

No offense here, just pointing out what seems to be the obvious to me here. If you are worried about that scenario, just put unlocked spare locks in the case where they are clearly visible. Seems if they break it open, they could figure out to put those on- on second thought, given the IQ level of some of these people, better put a note on the spare locks!
“I never knew of a Morning in Africa when I woke up and was not happy.”
— Ernest Hemingway

I pack my gun case with whatever is needed to make the 50 pound limit and never had a problem flying out of Dulles on SAA or Philly/Atlanta on Delta, both to SA. I use Gracy Travel, stay at Citilodge (a whole lot easier than Afton house or another off airport overnighter). YMMV.
"Every man dies. Not every man really lives". William Wallace

A different take is that the ban is economic rather than terror based. The aim is to financially penalise the airlines affected becuase they are receiving large subsidies.

From an article in NZ herald but orignially from Washington Post.

"There is an alternative explanation. It may not be about security.

Three of the airlines that have been targeted for these measures - Emirates, Etihad Airways and Qatar Airways - have long been accused by their US competitors of receiving massive effective subsidies from their governments.

These airlines have been quietly worried for months that President Donald Trump was going to retaliate. This may be the retaliation.

These three airlines, as well as the other airlines targeted in the order, are likely to lose a major amount of business from their most lucrative customers - people who travel in business class and first class.

Business travellers are disproportionately likely to want to work on the plane - the reason they are prepared to pay business-class or first-class fares is because it allows them to work in comfort.

These travellers are unlikely to appreciate having to do all their work on smartphones, or not being able to work at all. The likely result is that many of them will stop flying on Gulf airlines, and start travelling on US airlines instead.

As the Financial Times notes, the order doesn't affect only the airlines' direct flights to and from the United States - it attacks the "hub" airports that are at the core of their business models.

These airlines not only fly passengers directly from the Gulf region to the United States - they also fly passengers from many other destinations, transferring them from one plane to another in the hubs.

This "hub and spoke" approach is a standard economic model for long-haul airlines, offering them large savings. However, it also creates big vulnerabilities. If competitors or unfriendly states can undermine or degrade the hub, they can inflict heavy economic damage.

The United States is weaponising interdependence. We live in an interdependent world, where global networks span across countries, creating enormous benefits, but also great disparities of power. As networks grow, they tend to concentrate both influence and vulnerability in a few key locations, creating enormous opportunities for states, regulators and nonstate actors who have leverage over those locations. 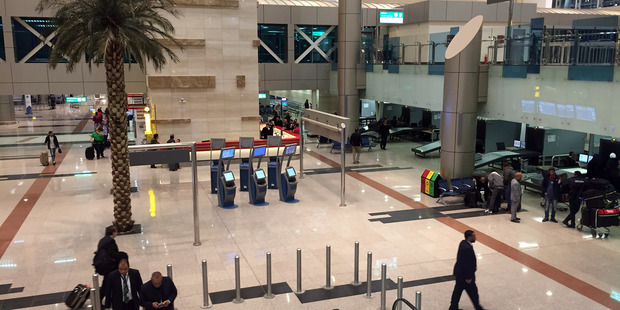 Airport staff gather near a security checkpoint at Cairo International Airport. Photo / AP
In this context, the United States is plausibly leveraging its control over access to US airports, which are central "nodes" in the global network of air travel between different destinations. It is using this control to attack the key vulnerabilities of other networked actors, by going after the central nodes in their networks (the hub airports) and potentially severely damaging them.

There may not be much that Gulf airline carriers can do. Gulf airlines have tried to defend themselves against political attacks from US competitors by appealing to free trade principles. The problem is that standard free trade agreements, such as World Trade Organisation rules, don't really apply to airlines (although they do apply to related sectors, such as the manufacture of airplanes).

This has allowed the Gulf airlines to enjoy massive subsidies, without having to worry too much about being sued in the WTO. However, it also makes it hard for Gulf states or the states of other affected airlines to take a WTO case against the new US rules, even if these rules turn out to be motivated by protectionism and the desire to retaliate, rather than real underlying security questions.

If this were happening in a different sector, it would make for a pretty interesting case. States preserve carve-outs from international trade rules when they feel that their security is at stake. Would the United States prevail in a case like this, where there is a colorable security justification, but where there is also a very plausible argument that the real motivation doesn't have much to do with security?

Or would the WTO defer to the United States' proposed justification? It's very likely that the Trump Administration will make more unilateral rules that are justified using the language of national security, but are plausibly motivated by protectionism, so we may find out.

Except, what about Turkish Airlines?

So guys - having been around this sort of work in a different life - I suspect it is likely a lot simpler than some of the theories at suggested. They (read CIA/NSA/GCHQ/SIS) almost certainly have a confirmed threat around a computer/I-pad device which has a C-4 or Semtex core but will still respond to a turn-on switch at security like a normal device. Those of you have travelled internationally a lot will recall instances where you may have been required to turn on your lap top or I-pad. That has happened to me several times flying through the Middle East. Also, Espionage thrillers to the contrary, timers are surprisingly complicated, and most of these things, if they really want them to activate in the air, require the true believer to push a button to open the doors to paradise. So they are trying this ban initially hoping it works and secondarily hoping it is a signal to the bad guys that they are on to this particular strategy. You are right that a bomb detonating in a hold isn't a lot better than in the cabin - but it is better - particularly a small one. Most baggage on international flight is now stored in containers. Takes a lot to cause a breach and fire may or may not catch. On the other hand, our Jihadi in the window seat doesn't need much blast effect to create a breach. Homeland Security also realizes that banning them entirely would seriously damage an affected airline. Just adds a little more spice to our international adventures!
"We sleep soundly in our beds because rough men stand ready in the night to visit violence on those who would do us harm" American Novelist - W. Churchill

Here's an update from Emirates this morning - this was good to hear as I know I would not want to put my electronics in my checked bag in Johannesburg at least they would only have to go in the hold for one leg of the trip home.

"Emirates customers traveling to the US via Dubai will be able to utilize their laptops and tablet devices on the first part of their journeys, and also during transit in Dubai. They must then declare and hand over their laptops, tablets, and other banned electronic devices to security staff at the gate just before boarding their US-bound flight. The devices will be carefully packed into boxes, loaded into the aircraft hold, and returned to the customer at their Emirates US destination. There will not be any charge for this service.

Passengers on US-bound flights starting their journeys in Dubai are encouraged to pack their electronic devices into their check-in luggage in the first instance, to avoid delays.

Electronics on Safari...what do you take or not take?
2 3

Warning: Do Not Put Valuables in Checked Baggage

A Warning To Hunters Connecting From Flights with Delta Airlines