My son and I went for a red hunt last weekend. I've never heard a red roar so it was pretty cool to listen to them on that first night, unfortunately they were roaring on the surrounding properties We did hear the odd groan on the place we were on and did stalk in on a stag that was doing the odd grunt but the terrain and long grass beat us and he gave us the slip. We managed to kill a hind for meat in a steep gully and both the boy and I were buggered by the time we climbed to the top of the escarpment with two legs each and the back straps. 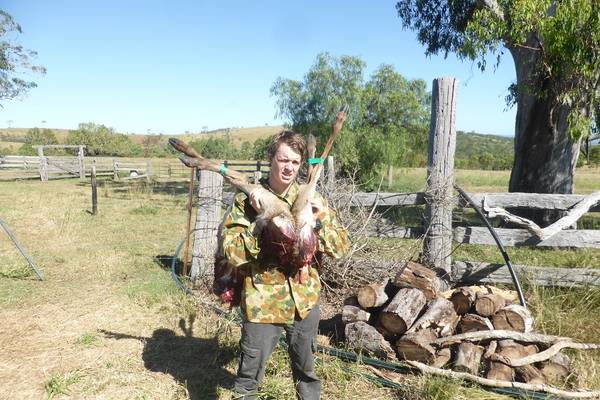 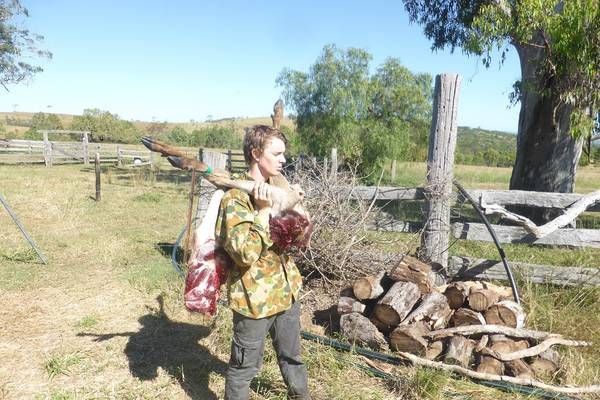 At the top the owner got on the radio and told us she had seen a stag and hind down near the dam below the camp so we set off and stalked in. We did see the stag in the lantana and I told the boy to shoot but I think he got a bit of buck fever and completely missed at about 20 meters :facepalm: I'm still taking the piss out of him
All in all I had a great trip with number two son, heard my first Red roar and saw my first Stag AND got some good meat. The grass was a killer, we're still picking out grass seeds from everywhere. Good for the owner, about waist high but it covered all the rocks and I did go arse up on the carry out with the only thing stopping me rolling to the bottom of the gully was Jadams legs!

Congratulations.
Hearing them roar for the first time would be special.

Interesting way to pack the meat out.

Nothing wrong with that mate. A good feed of venison there.

Sounds like a fun hunt
Bet the young fella had a ball
THE HUNTER; The person that pays over 90% of the cost for the presavation and maintance of wildlife and gets zero credit for it ................

I think a hunt that requires a pack out makes you appreciate the hunt a whole lot more .

My knees' didn't appreciate it mate

LOL.... NO...Just kidding, we did have a laugh after though
You must log in or register to reply here.