William Jackman Jeffery introduced this cartridge in 1019, as a rim less version of his very popular .400 Jeffery. The .404 Jeffery is a large caliber, rimless cartridge designed for large, dangerous game, such as the big five (elephant, rhino, cape buffalo, lion and leopard) of Africa. Other names for this cartridge include .404 Jeffery Rimless, .404 Rimless Nitro Express, and 10.75 x 73 mm.

It was created by Jeffery of England based on their desire to duplicate performance of the .450/400 (3 1/4") cartridge. There are two basically similar sets of dimensions for this case, depending on the manufacturer. The .404 Jeffery as originally loaded fired a .423" diameter bullet of either 300 gr (19 g) with a muzzle velocity of 2,600 ft/s (790 m/s) and muzzle energy of 4,500 foot-pounds force (6,100 N-m) or 400 gr (26 g) with a muzzle velocity of 2,125 ft/s (648 m/s) and 4,020 foot-pounds force (5,450 N-m) of energy. It is very effective on large game and is favored by many hunters of dangerous game. Performance and recoil are similar to other African dangerous game cartridges.The .404 Jeffery was popular with hunters and game wardens in Africa because it gave good performance with a manageable level of recoil. By way of comparison, the .416 Rigby and .416 Remington Magnum both fire a 400 grain .416 " bullet at 2,400 feet per second (730 m/s) with a muzzle energy of approximately 5,000 foot-pounds force (6,800 N-m), which handily exceeds the ballistic performance of the .404 Jeffery but at the price of greater recoil and in the case of the .416 Rigby, rifles that are significantly more expensive.

Origin
Originally the .404 Jeffery was very popular with hunters in Africa and saw significant use in both British and German colonies. As the British Empire began to shrink, many of the popular British big-bore cartridges also dwindled in popularity, and the .404 Jeffery was one of them. By the 1960s it had all but disappeared from common firearm usage. . This condition was mostly the result of the closing of the British Ammunition giant Kynoch, which was the primary manufacturer of the .404 Jeffery and many other British cartridges. The introduction of the .458 Winchester Magnum in 1956 in the Winchester Model 70 bolt action rifle provided an affordable alternative to the big Nitro Express rifles and cartridges and helped to hasten the demise of the .404 Jeffery. Winchester also started a marketing campaign at about this time called "Winchester in Africa" with much success. Renewed interest in heavy game rifles and political stability in Africa has led to a resurgence in African hunting and the rifles suited for it. Kynoch Ammunition has reopened as Kynamco Limited Kynoch Ammunition. Hornady and Norma of Sweden are also offering .404 Jeffery ammunition.

Wildcats
In recent times, the .404 case has seen a resurgence in use by wildcatters. This case has no belt, unlike many other magnum cartridges, which can be desirable for handloading because of possible problems with case head separation with repeated reloading of belted magnum cartridges. The rimless design also contributes to smooth feeding from the box magazine of bolt action rifles.

I love the .404! Havent taken one hunting yet but fully intend to take my CZ Safari Classics .404 to Africa someday soon. Check out my article in the Sept. 2010 issue of Gun World magazine for my pc on this cartridge and the CZ rifle. Right now I am planning for my hunt to Zim in 2011 with Touch Africa Safaris for plains game.

Welcome to the forum !! .404 is another fabolous caliber, I shall certainly read your write up on it. May you have a fine Safari in 2011. Shall be looking forward for valuable inputs from your end.

Thanks for the reply! If I like this next trip half as well as the references I received for it did, it should be a good one. I hunted Zim in 1996 for sable and plains game where I did pretty well on a ranch hunt near Nyamandhlovu (Feet of the Elephant) northwest of Bulawayo with Fountain Safaris of the Greaves family, PH Mike Smith. Mike also took me down to Wayne Grants property for Tsessebe and I got a great looking 16 incher there.

All trips to Africa are good, some are just better than others!
T

The .404 Jeffery is a cartridge that just says Africa to me. If I hunt Cape Buffalo someday, I would love to use a Heym bolt action in .404 Jeffery. Great article Monish.
B

Great write up monish, very concise. Anyone I have met who owns a 404J raves about it, enough so that if I ever buy a 404, I think a 404J would be my choice of cartridge. Like Christian, I like the look of the Heym rifles, and intend to have a look at them at our Australian dealer sometime soon.

Zimbabwe , I believe is a another great hunting destinations, never hunted there, Uganda too has opened up the doors for hunting since a year, the country where WDM (Karamojo) Bell took the maximum of his elephants.

May you have a fantastic safari..

Another cartridge that I would like a rifle chambered too!!

Thank you for your kind wishes. I am looking forward to the Zim trip.

I own a 416 Rigby and later I had my dad acquire a 404J. Both rifles were built by Sabi Arms in Nelspruit. The 416 has a CZ602 action and the 404J a CZ550 action because the 602 actions where unobtainable at that time. Shooting both rifles is great fun and both boast with a muzzle velocity of just over 2300ft/s. With this said I still feel the 404J recoil is milder than the 416R. Can’t say that one performs better in the field then the other. Unfortunately I have tested them only on eland, giraffe and one buff to the 416R. Both do extremely well on shots up to 150-200m. Both cases are very big which limits magazine rounds. The CZ actions allows for 4 in the mag and one in the chamber. When one sit down and decide on which one to acquire of the two, then I suggest reading some history on Zim game wardens and some Harry Selby. For the rest I think it is a case and excuse the pun of holding the two, 404 and 416, rounds in your hand and decide which one you fancy more.

Your Dad & you have very fine calibers , .404 has been around for 100 years, & has been a very popular in India for big Game hunting specially tigers Bison, and water bufflo . I have a take down detachable barrel W.J. Jeffry's in .404 chambering , and this rifle has had taken lots of heads, was mainly used by my grandad.
Sabi , I believe are great rifle makers, never seen rifles of their production.

Monish I have to take issue with your 1909 or 1910 date of introduction. I have been collecting 404Jeffery related data from before I decided to build mine. I have a page from the 1905 Jeffery catalogue which contains data AND indicates a design date of at least 1904 for it to have been in the 1905 catalogue. It also makes me consider that the name of the cartridge, which has no corelation to its bore or grove dia, may have been influenced by a couple of factors. The 40 cal of 1904 suguests a passing similarity of naming to the then just released 30-03 before it morphed into the 30-06. I have other data that shows an early rather than later introduction of this wonderfull old cartridge that is still all that is necessary for the big boys.
I have the page saved in adobe reader and cant find how to post it here but can email it .

Would like to read that data you have with you on the .404, kindly enlighten us on the introduction year of this caliber as a commercial cartridge. I believe it was 1909, as per my know how.

PM me an email adress and I can send it to you.

Please mail it at d.monish@yahoo.co.in

Email away Monish.
Have a bit more on the developement of the 404, with Rigby making an early 404 style cartridge be turning the rim of a 450/400 3in to creat a rimless case to fit a Mauser action.

Its quite a info . on this cartridge's introduction, need to get more into the base to check up with the history. Thanks for the mail. 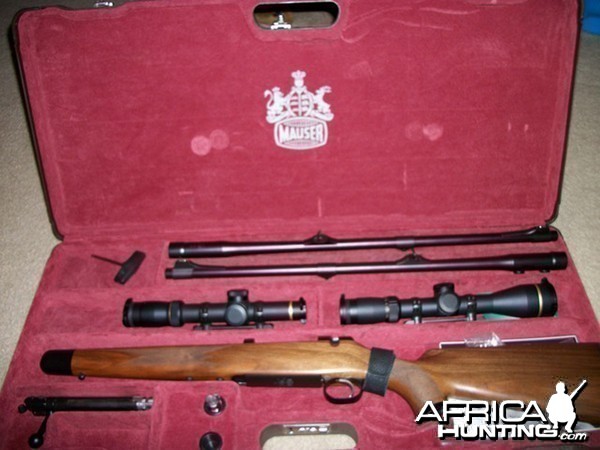 Here she is with the 404 barrel attached 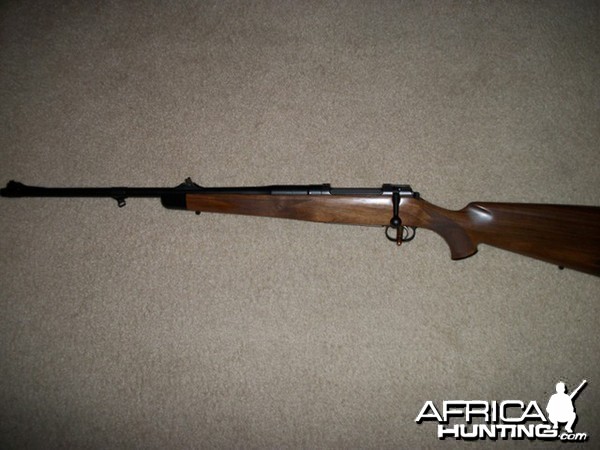 Ed
Last edited by a moderator: Dec 1, 2016
You must log in or register to reply here.