What to use for grouse

It seems every other serious Grouse Hunter carries a 20 gauge semi-auto... Have seen many an old beat up Franchi sawed off for a quick pointing open choked gun.
"I never knew of a morning in Africa when I woke up and was not happy." -E.H.

I use a 20 bore OU for ruffed grouse which, in my opinion, one of the best tasting birds out there...if it’s cooked correctly.

On my Alaska grizzly hunt, we shot Spruce Grouse and Ptarmigan for the pot to supplement the fish we caught and standard Spam and Mountain House. They were quite a treat. There was a little 410 break action single in camp which sufficed. The birds were not a big challenge to shoot, but a real treat

I was at an auction and picked up this folding pack gun in 410.

And last fall I bought an economical but fine little 28 gauge side by side. There is a distributer/dealer in Wisconsin importing Huglo shotguns which are now good quality, especially for the price. Available in different grades and stock styles. Not sure what you may have available in Canada.

Beautiful side by-definitely does the ruffed grouse justice in his kingdom-jealous! 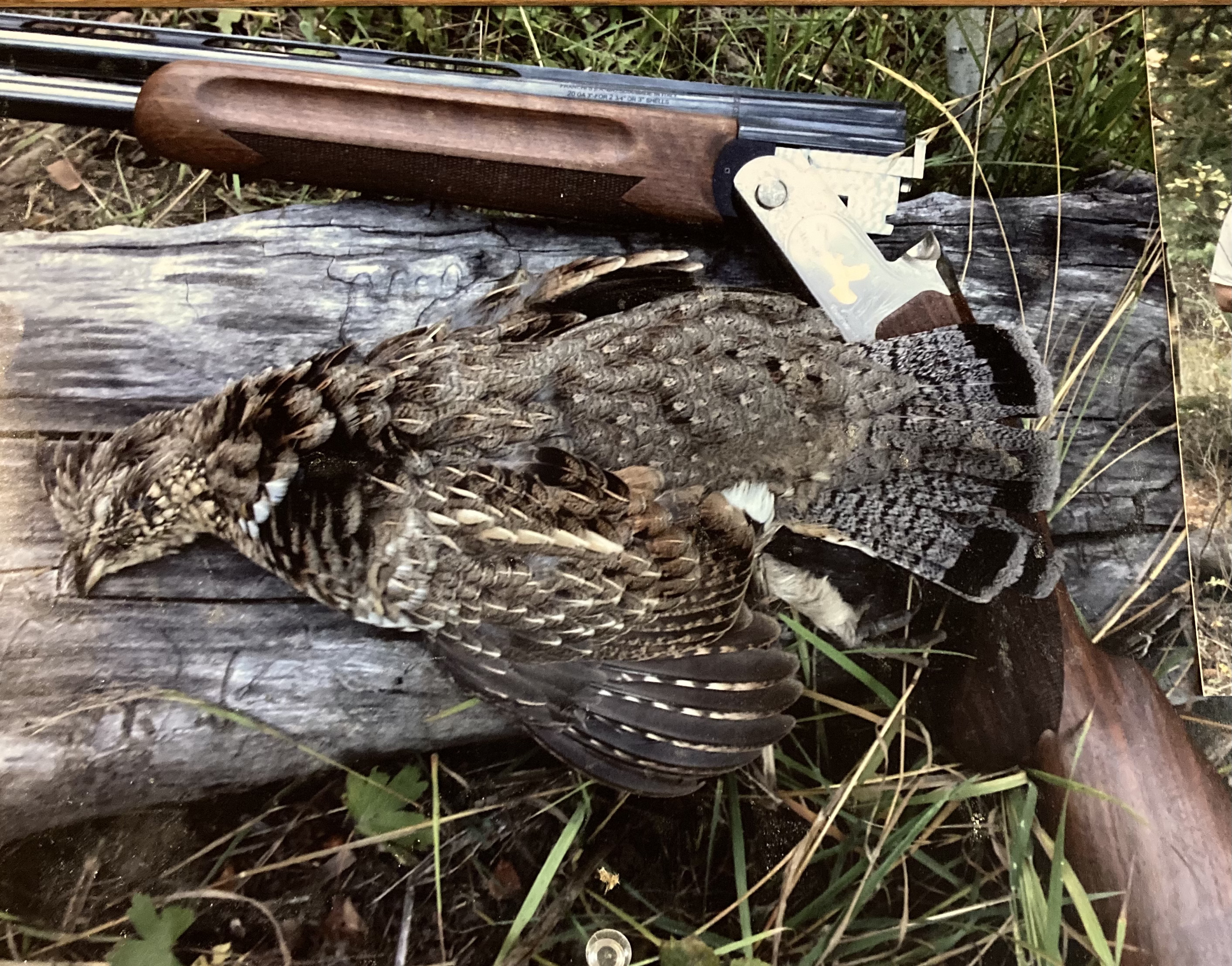 A good quality semi is much less expensive than an O/U or SxS of equal quality. I like 28 gauge but can’t afford the ammunition. Some people have a really hard time shooting O/U’s and SxS’s well, especially SxS’s.


Shootist43 said:
410(s) are great, providing you are an Expert or better with a shotgun. I think for most folks the 20 Ga. would be a better choice.
Click to expand...

Red Leg said:
A .410 would be a prescription for frustration and wounded / lost birds.
Click to expand...

Alistair said:
For me in the UK doing walked up or driven grouse, the best gun is a specialised 12 bore side by side.
Click to expand...

There’s usually more than one correct way of doing something and I certainly believe that’s applicable here. Not for you but for others.

C.W. Richter said:
It seems every other serious Grouse Hunter carries a 20 gauge semi-auto... Have seen many an old beat up Franchi sawed off for a quick pointing open choked gun.
Click to expand...

I bird hunt as much or more than I hunt with rifles and as such own a number of shotguns. I’d use one of my 26” barreled 20 gauge semi’s for grouse. I have several in my collection. 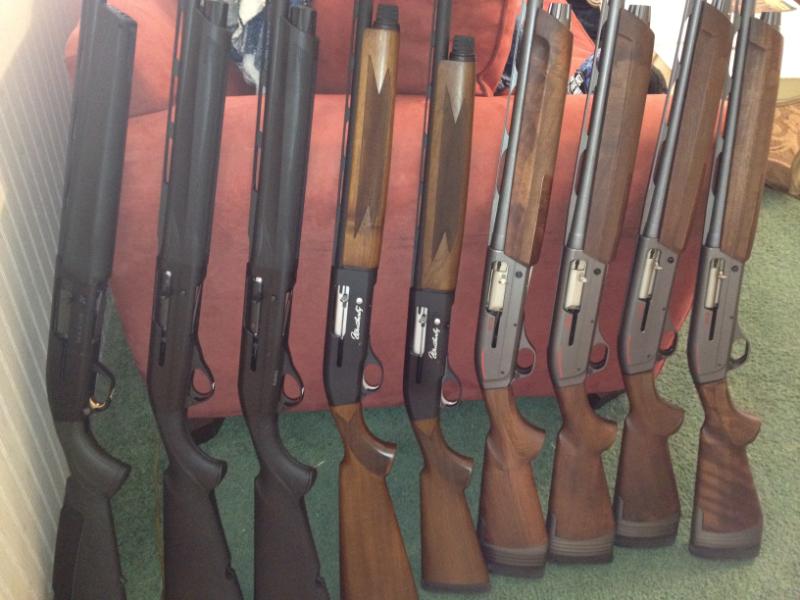 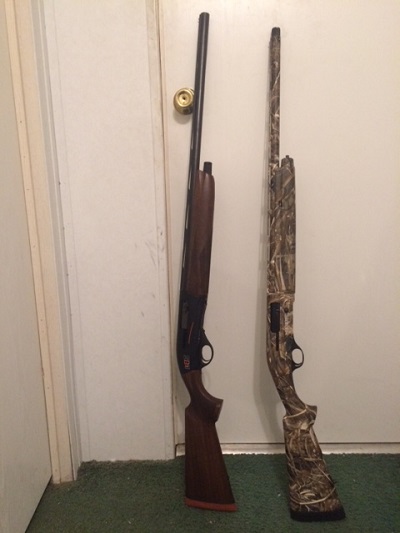 Dwight Beagle said:
A good quality semi is much less expensive than an O/U or SxS of equal quality. I like 28 gauge but can’t afford the ammunition. Some people have a really hard time shooting O/U’s and SxS’s well, especially SxS’s.

There’s usually more than one correct way of doing something and I certainly believe that’s applicable here. Not for you but for others.

We are all different. Hunting feather is all about SxS's to me (with the occasional OU thrown in). It is also just as great a passion as hunting big game with a fine rifle. I also hunt quail a lot in Texas and the Southeast where showing up with a semi-auto would be like arriving without pants. I also do a lot of competitive pigeon shooting, and there again, though the guns and bores are bigger, only a break open is allowed.

I will admit that about half way through day two in Cordoba, Argentina a semi auto 20 (from a recoil perspective) makes a lot of common sense.

But for flushed woodcock or ruffed grouse, a light 20 bore SxS is the perfect choice for me.
"We sleep soundly in our beds because rough men stand ready in the night to visit violence on those who would do us harm" American Novelist - W. Churchill

"The past is a foreign country, they do things differently there." L.P. Hartley
D

The shotgun I grew up hunting with was an ancient Montgomery Wards 16 gauge SxS. I could really hit with it. It was stolen when I was in college and I replaced with an Auto-5. My problem with SxS’s is that I want a Grulla or AyA and something seems to always come up that money has to be diverted to. I’ll get one eventually. When I do get one it will definitely be used for quail and pheasant. I’ll keep using a semi for dove.
Aquaman at various pools.

Dickenson estate sxs 20 gauge is what I use. Very nice and light. 26 in barrels 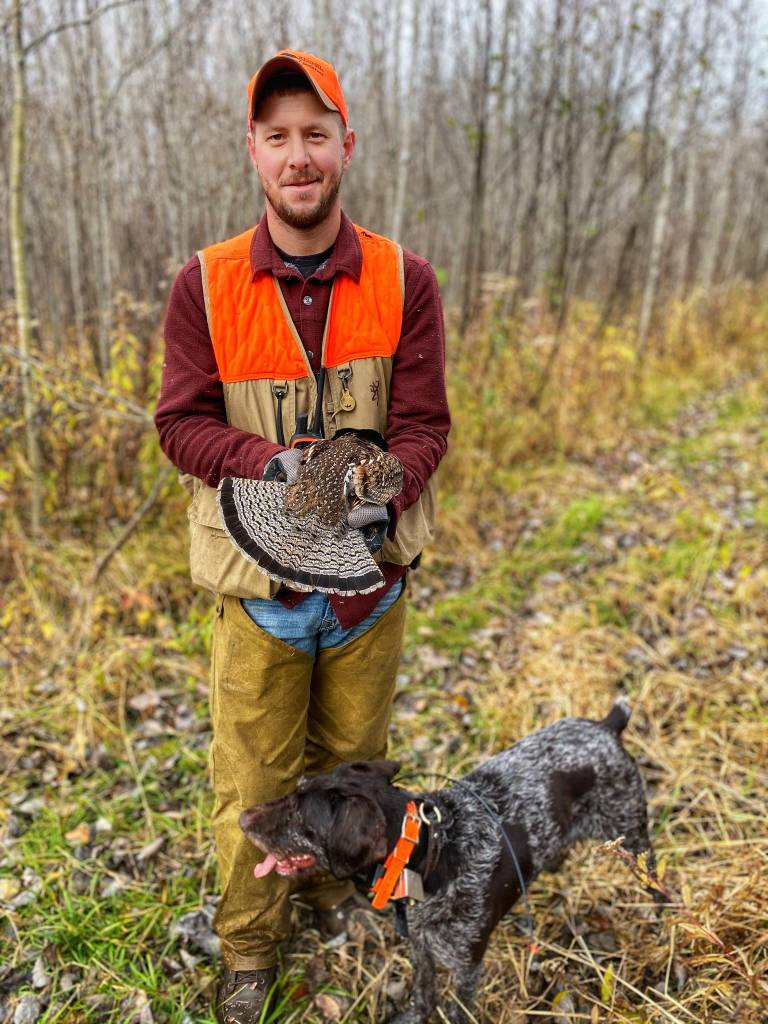 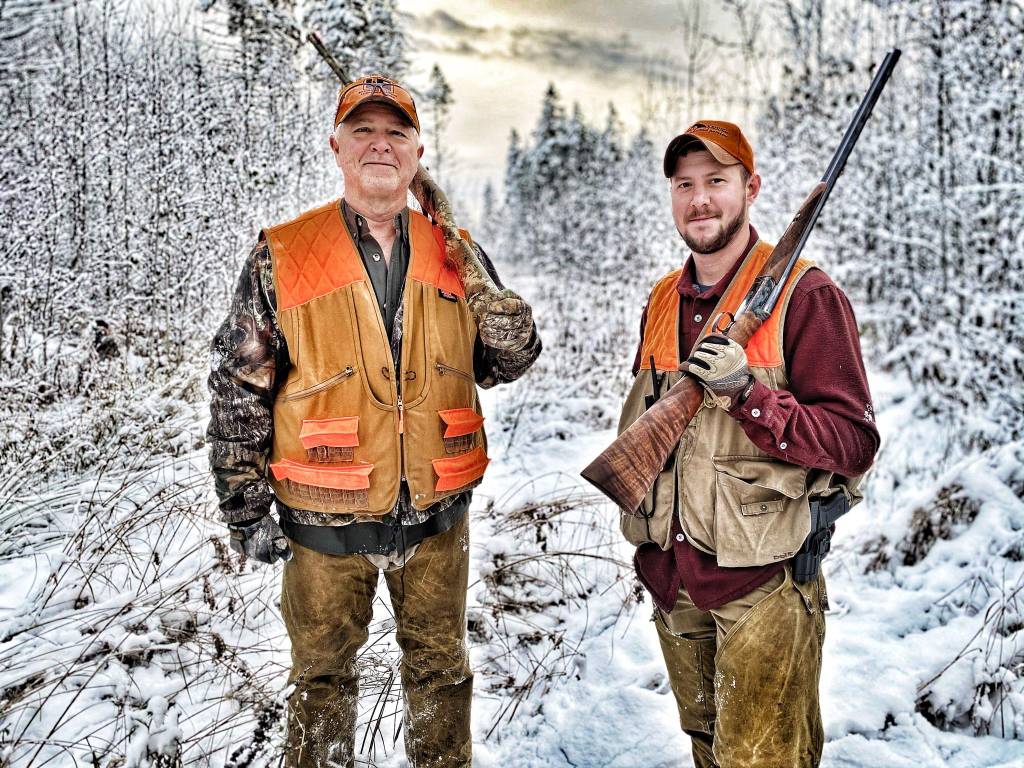 I've been considering a Dickinson Plantation. What do you think of your Estate?
"To be ignorant of what occurred before you were born is to remain forever a child. For what is the value of human life, unless it is woven into the lives of our ancestors by the records of history?"
Cicero

jeanes said:
I've been considering a Dickinson Plantation. What do you think of your Estate?
Click to expand...

I really like it. I do like the look of the plantation better for a bit of an upgrade but for price wise chose the estate. It's my go to bird gun now vs my 12 ga o/u

Great looking pup as well! Drathaar or Griffon?
"We sleep soundly in our beds because rough men stand ready in the night to visit violence on those who would do us harm" American Novelist - W. Churchill

Thanks! She's a german wirehaired pointer

Two situations are discussed here - the actual hunt for grouse and the passing hunt for grouse, "in cauldron", during a hunting expedition for something large. The first situation is very vast, this is the topic for the section "shotguns".
For the second option, it is better, of course, to have an "expedition rifle" - drilling, a three-barrelled gun. Two rifled barrels for basic hunting and 12, 16, 20 gauge. But not everyone can afford it.
That's why I like the bokbuksflint variant - a 20-gauge barrel and a 7.62 x 54r. Here it is correctly noted that there is enough caliber for a bird is .22LR. But if there is a chance to meet Teddy in the forest, it is better to have a caliber larger than 22LR, somehow the soul is calmer.
Practice shows that even fairly large rifle bullets do not spoil the feared game very much. Getting into the center of the carcass is difficult to me , and any tangent wound is enough for the result. And you can have several "bird" cartridges with a weak pistol charge. I remember that we had fun in our youth, using blank cartridges left over from the exercises, and buckshot, suitable for the caliber of AK, which was simply lowered into the barrel. enough for stray cat.
There is also a solution - shot cartridges for rifle. But I've never read about the practical use. Here I think to try. 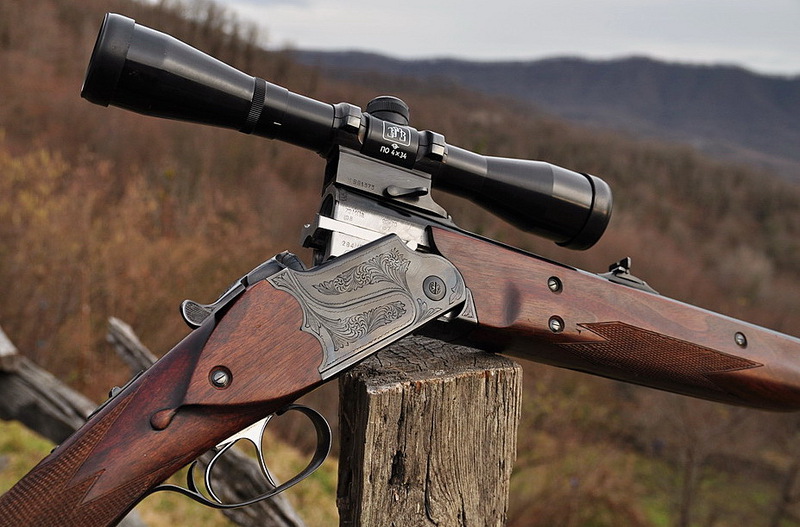 My favourite Grouse Rig, is a Pump-Action(Although a SXS Double would be wonderful) .410 with Buckshot (Only allowed during Deer Season, here)... The Reason I like Buckshot for Grouse, is that it gives me a very tight blast pattern(about an Inch and a half at 30 yards). This allows me to shoot their heads off if they are stationary or allows me to take them on the Wing... The beautiful thing about the Buckshot, is that it passes clean through the meat, and you don't have to dig it out, later... My other choice is a .22LR Rifle, with Open Sights... A Headshot, while they are Stationary, is all it takes... I've always been somewhat o' a Marksman, it's a hereditary trait in my family... Either o' these rigs are best suited for someone that shoots in the Expert Class or higher... One interesting anecdote, is that I have always shot a Shotgun, exactly the same way as I do a Rifle... Which means, that whatever I shoot with one, generally bears the brunt o' the blast pattern... Case in point, the only time I ever used a 12 Gauge(With #6 Shot) on a Grouse, it flushed about 15 yards in front o' me... I shot it on the wing... Needless to say, I must have hit it dead center, with every single pellet... For, it exploded in a huge puff o' feathers! I never found a single trace o' meat or bone... There was nothing left but scattered feathers! That was when I be switched to a .410 and have never had the same problem since... Depending on your Marksmanship ability, I would suggest finding yourself a Shotgun that fits you well, in an action type that you are comfortable with, in a Gauge that works for you(Somewhere between a .410-20 Gauge, should be ideal for Grouse)... What is equally important, is Shot size & Load... I generally prefer the maximum Shot Size allowed(In my Case Buckshot, during Deer Season, or #4 outside o' Deer Season), but, this is person personal preference, namely because I can shoot well enough that I don't need a lot o' Pellets, and I hate digging Pellets out o' the meat... When it comes to Chokes, I prefer a fixed Full Choke for Grouse... But, again depending on you Marksmanship ability, you may prefer a Modified Choke... Or, if your Shotgun has interchangeable Choke Tubes or an Adjustable Choke, you can experiment to your heart's content... Although, the most important piece o' advice I can give you, is Pattern your Shotgun, before taking it into the woods... Pattern it with different loads & different Chokes(If applicable)... Really get to know your Gun, before you hunt with it! You'll never regret this!

Anyone else like to use a handgun? I like to use an old Colt Single Action Army. It makes for fine sport in elk camp.
D

CM McKenzie said:
Anyone else like to use a handgun? I like to use an old Colt Single Action Army. It makes for fine sport in elk camp.
Click to expand...

I'd love to, but Hunting with a Pistol is Illegal in Canada...
R

There's a reason the 16 ga is called the Queen of the Uplands, especially if it's a Parker VHE or a Winchester 21. Although, a Browning Superposed 20 ga is also well qualified.

CM McKenzie said:
Anyone else like to use a handgun? I like to use an old Colt Single Action Army. It makes for fine sport in elk camp.
Click to expand... 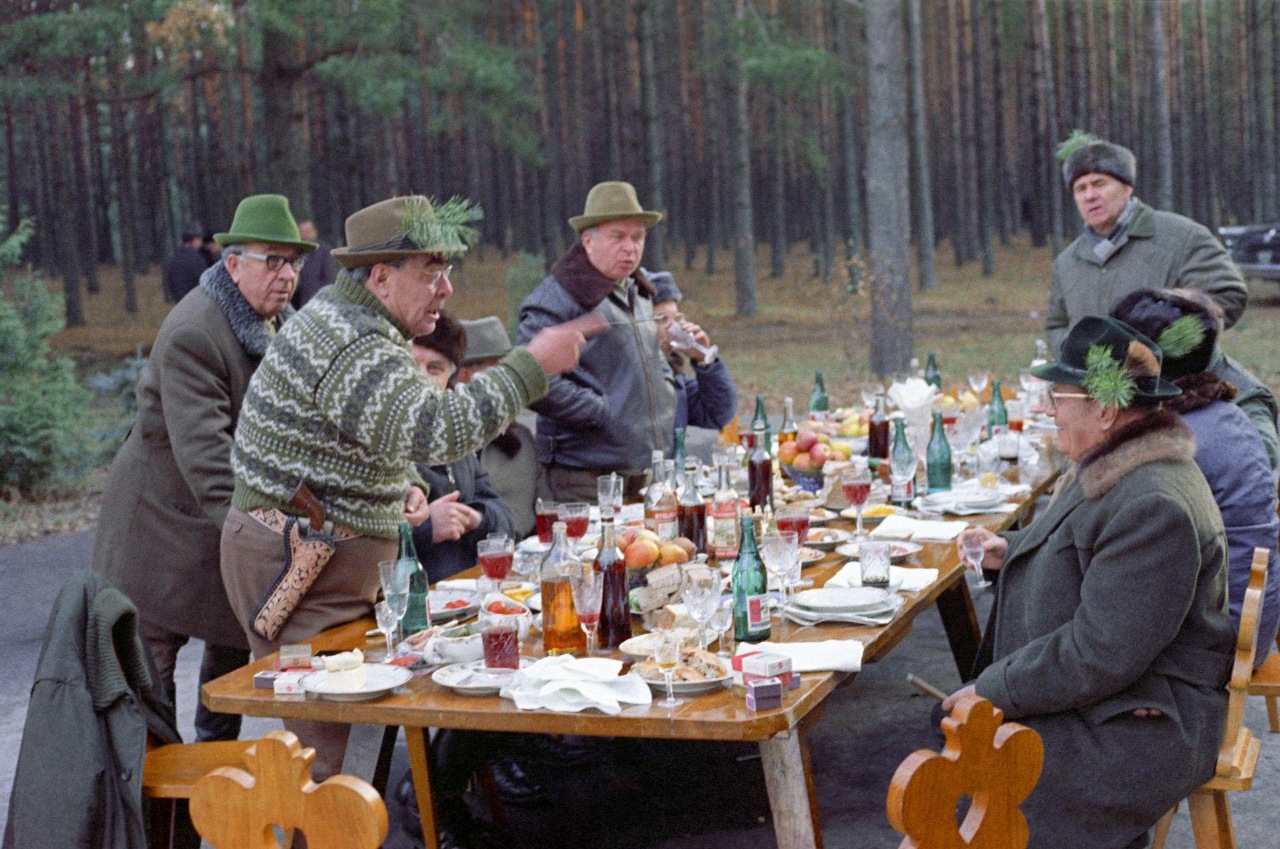 Ha ha..good old Brezhnev...seems as he liked western goods eh...perhaps this was a bear hunt..Tito is first on the right, yes..?
"I have taken more out of alcohol than alcohol has taken out of me.” Winston Churchill

"Amani haipatikani ila kwa ncha ya upanga".. Peace is not possible except by the point of a sword..
You must log in or register to reply here.

Another just for fun, what caliber to build thread
2

N
What headgear do you guys use on Safari?
2 3