The Old Dagga and the Leopard

It was June 2012 when Earl Lanning first set foot on African soil. He was 80 years old and finally fulfilled his dream to hunt Africa ...

At the end of this article I mentioned Earl will be returning this July to fulfill his ultimate dream ... LEOPARD !


Earl and his lifelong friend Mel Hankla arrived at our camp on July 14. We had quite a few leopards on bait but we were targeting a specific male with a very bad limp on his left hind leg. We have known this male for about 3 years as he frequented the bait area from time to time . He was a very old guy and was losing condition quickly .


We tried to get him to commit to the bait since April . He would sometimes stay 2 or 3 days and then disappear like a ghost in the night for weeks. We were very exited when he appeared again a week before Earl arrived. True to his nature after 2 days he was gone again for 7 days . He finally reappeared on June 14 the day Earl arrived. 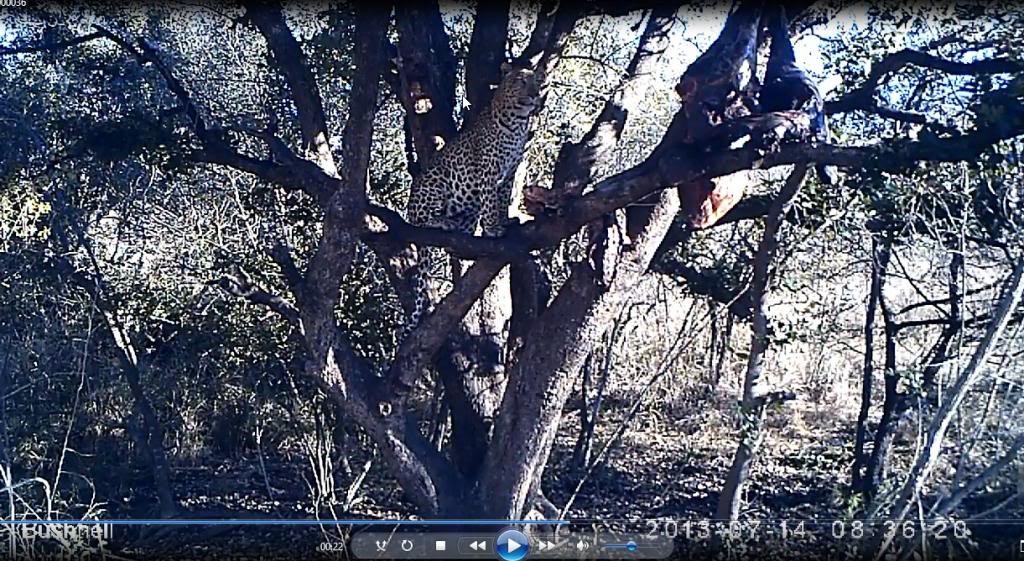 We decided seeing that he was very unpredictable to sit Monday July 15 ... We also had a cub and heavily pregnant female on the same bait . 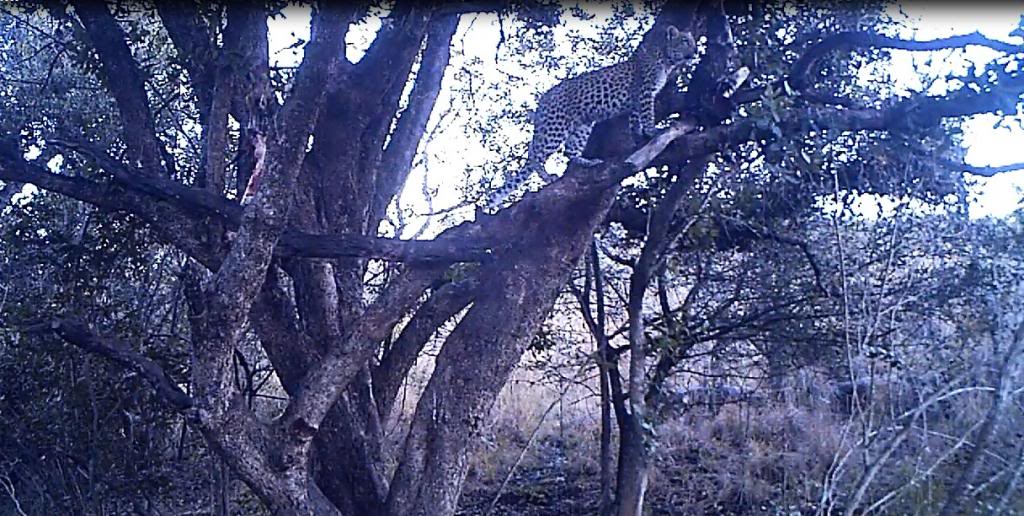 We went in about 4 in the afternoon. True to his unpredictability he did not show up and we were entertained by the female most of the night ...

We decided to wait for him to return before we attempt to sit this bait again. The next morning we decided to check a different bait on a neighbouring property we put up only 4 days earlier as a back up plan should "Lefty" disappear . By now we have named him Lefty due to his injured back leg .

We were astonished to find probably the biggest leopard track I have ever seen close to our new bait ... We checked the camera and had only blurry pictures of this potential monster. We changed the camera to video and started building a blind .

Earl brought with a special bottle of "BOOKERS" to be opened only when the cat is on the ground . This new possible Tom got named BOOKER . He reappeared on Thursday July 18 .

Lefty were still on one of his now famous disappearing acts. We dediced to get BOOKER . We left the camp to get into the blind long before dark . We also had another young male and a female feeding on the same bait as BOOKER ...

We started unpacking and getting everybody in the blind only to realise we had everything besides Earl's gun ...... We had to turn back as there were no time to go back and get the gun . We decided to give him one more night to get comfortable with the bait.

We checked both baits the next day ... Earl had a reason to smile .... The booker bait only had one of the smaller cats on the previous night .... So thanks to Earl's gun being left behind we saved ourselves a cold slow night in the blind . Lefty has also not been back yet .

Sunday morning both baits did not have any good news on the males again.

Then came Monday July 22 ..... We checked BOOKER bait to find only the 2 younger leopards were on the bait the previous night .

Then to LEFTY .... I told the guys on Sunday night I believe one of the TOMS would be back that night .... and so it was. LEFTY was back after 7 days . We immediately got things ready for that night . We could not take any chances of him disappearing again .

This was going to be a FULLMOON ..... We got into the blind a little before 4 o'clock . We had all our equipment up. Trail camera , remote light with rheostat , handheld infra red light and 2 sets of night vision.... We were READY !!!!

Soon after dark a TOM made his presence known by the all familiar hoars'rasping cough . We heard him a couple of times close but he did not commit ... Finally in the Full moon 5 minutes before midnight he walked in like he has never been gone . He starting fighting the bait immediately. We got Earl ready. The light came on and after what felt like an eternity the silence of the night was broken by Earl's .375 H&H !

He leaped up in the air and landed on his feet and charged off into the darkness. We could still hear him for another 20 seconds. We called the vehicle and rest of back up in. We first looked at the trail cam only to realise the actual shot was not captured.

We then looked around and Rowan found the blood trail . Rowan and I stared off on the trail armed with powerfull falshlights and a shotgun each . He left a good bloodtrail and about 70 yds from the bait we spoted a thick brushy area he ran into and you could see he connected hard with one of the small trees.

We decided to go around and check the other side . We could see the small tree from the other side and saw a little trail heading down to a ditch. I headed down this trail and 10 paces further I spotted him in the grass.

Congratulations to Earl achieving this at 81 ..... By the sound of things it is not the end yet ..... We will keep you posted on this remarkable hunter that took his first trip to Africa at 80 !!!! 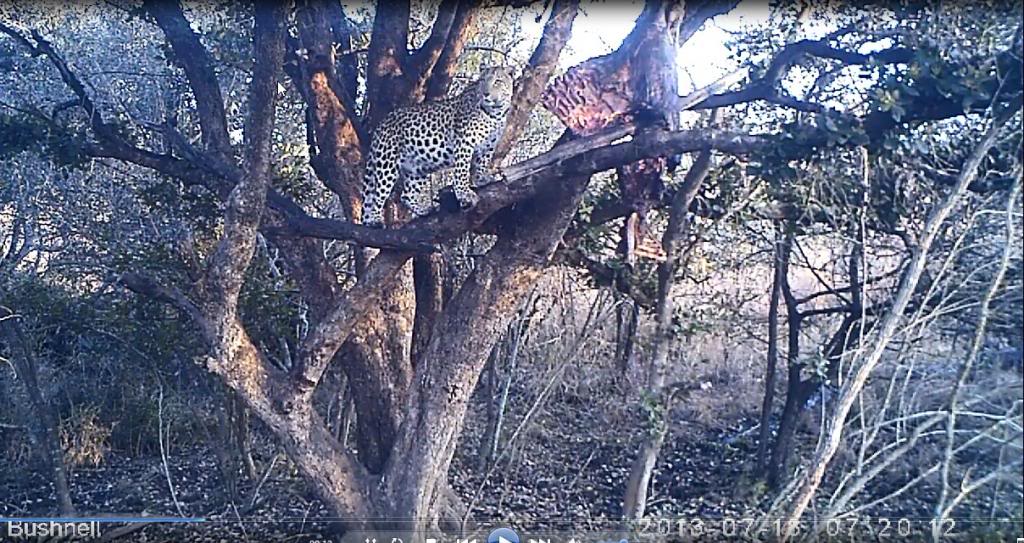 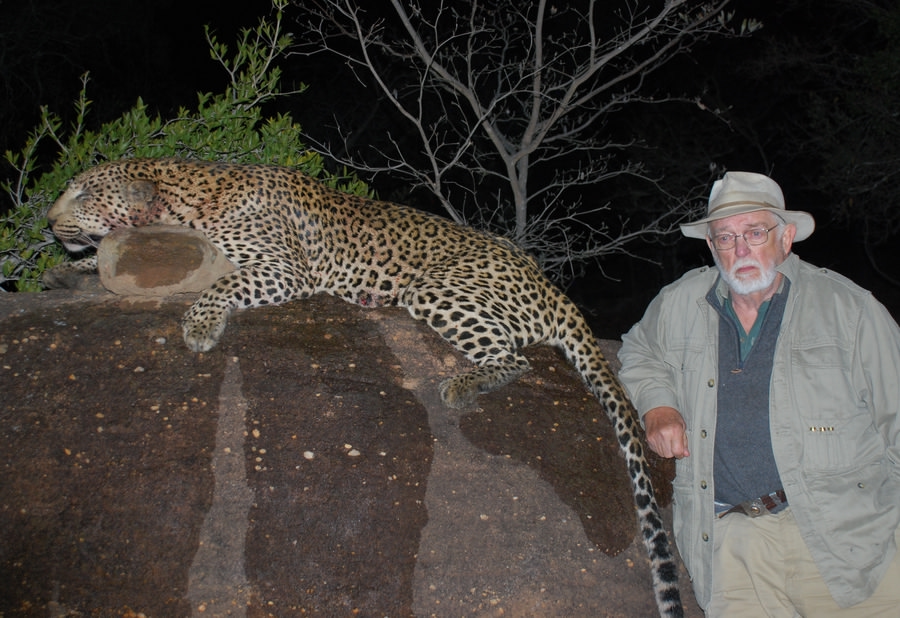 Just to give you an idea how many leopards are around . First picture is BOOKER .... We hope to get him next year . I am sure he will be one of the largest cats ever shot . He is not old yet but already estimate him over 190 lbs . I would judge him to be over 18 " 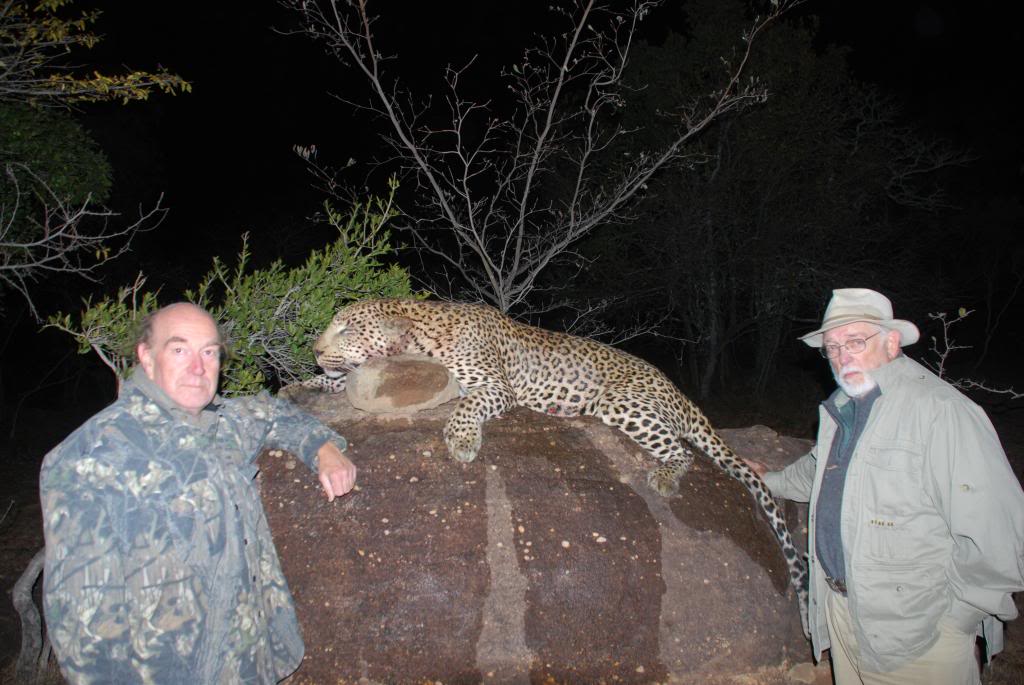 We have another leopard hunt next week ... The next 3 pictures are males on one bait . Smiley is the first one and hopefully the one we will get . The other 2 range between 135 and 165 lbs . Smiley quite a bit bigger .... 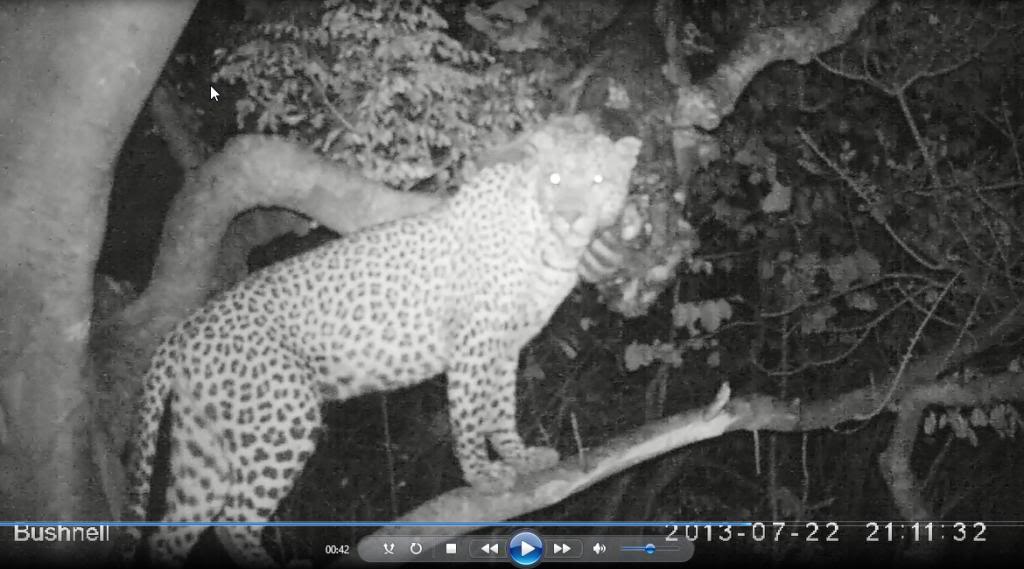 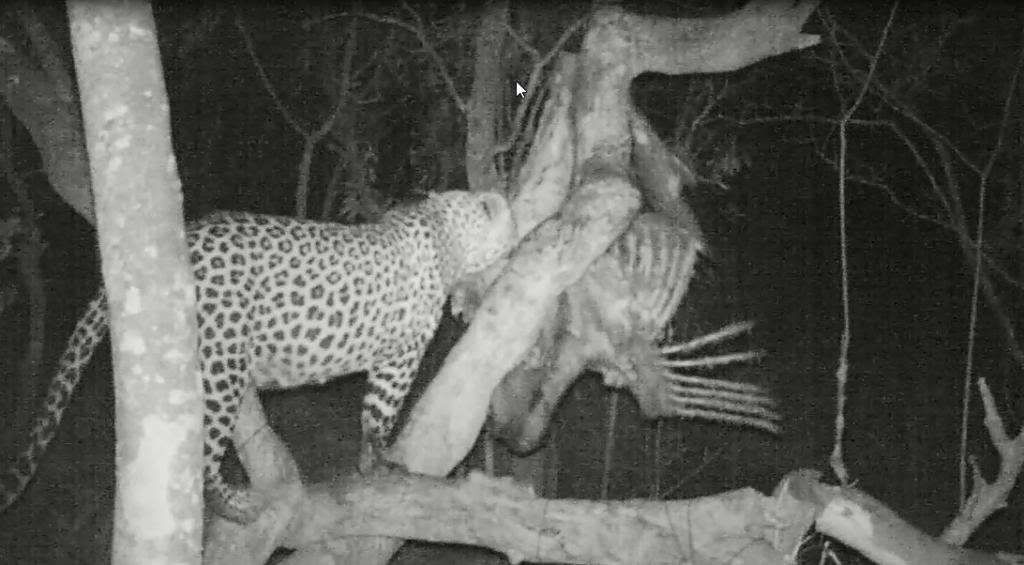 Sorry the first one of the last 4 pictures Booker ! The next 3 pictures are the males on bait for next week !!! The cub posted in twicw and the female just above the pictures above LEFTY !!!

Congratulations on such a big leopard. Thanks for sharing the report and pictures.
And here I am, returning to Africa of many faces;.... the sloe-eyed temptress with flowers in her hair who stole my youth and my heart, and left me an old man with a kaleidoscope of conflicting memories of many dashed hopes and some fulfilled dreams. E. Echols

Thanks guys for the kind words ... I find it fascinating that someone 81 years old still have the courage to take this on .... And as said he is not done yet ....

Congratulations to the hunter and the whole team who made this possible.

hats off to young earl :beer:
thanks for reliving the hunt for us Richard .
it sounds like fun and there plenty of leopards out your way mate
did you find out what was wrong with ole leftys foot ????
love all them pictures
thanks again for showing us :thumb:
THE HUNTER; The person that pays over 90% of the cost for the presavation and maintance of wildlife and gets zero credit for it ................
C

Well done to you and your hunter Richard! Great stuff!
B

Thanks for the report and Congrats to Earl for an Awesome cat!
Enjoy Life Now! It has an Expiration Date.

Congrats to Earl on a nice cat!

What a great story thank you. I am 61 and Earl is my new hero - I am planning a lot more trips to Africa!
"We sleep soundly in our beds because rough men stand ready in the night to visit violence on those who would do us harm" American Novelist - W. Churchill

"The past is a foreign country, they do things differently there." L.P. Hartley
You must log in or register to reply here.

When 4 Daggas Go Head to Head

Green Namibia and lots of leopards