The Ghost Of The Forest

The Ghost of the Forest
by Erik Mararv

We were actually hunting Giant Forest Hog; we had been out since the early morning and followed one of the forest trails we had previously cut out in one of the rain forest galleries. We had encountered a couple of buffalo herds and one solitary Giant Forest Hog who had managed to fool us in the last second, before the hunter could shoot. We were therefore quite tired by this time and in our minds we were already contemplating the long road back to camp: two hours of bumping over stocks and stones... 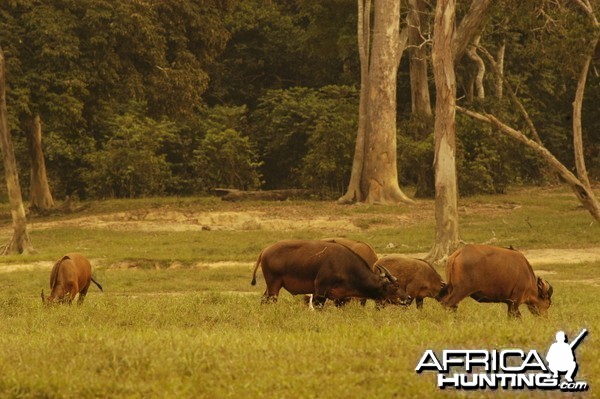 Small herd of Forest buffaloes in the southern part of the CAWA concession. Note the bull being a little bit darker then the females. This bull is a little bit young and thus the reason he was not taken at the occasion.

We came up to the agreed meeting point with the car and turned homewards. While driving, I was thinking about the enormous bongo track I had seen in the rain forest by the first major salt lick we had passed in the morning. As the road passed not far from this place, I decided, after some discussion with trackers, that we would leave the car one last time that day and go down to check the place once again. You never know when luck wishes to turn...

I left everyone in the car, except for the head tracker and my American hunter and friend, Sterling Fligge, and so we started our descent down the rain forest. It was getting late and I focused most of my thoughts on the dark clouds gathering, telling us that a storm was coming in from the east. We crossed the first stream and my American friend became soaking wet (for the 6th time that day) when he slipped on a slithery log and sat right in the water...

As we were approaching the saltlick, the paths became more beaten, and I drew of my shoes to walk barefooted the last 50 yards. 20 yards before I rounded the last bush, which was hiding the salt lick from us, I froze in the middle of a step. In a track that I knew my head tracker had left when we passed here previously in the morning, I saw it clearly: the track of the same monster Bongo from which I had seen tracks in the morning! This track could only be about an hour old. 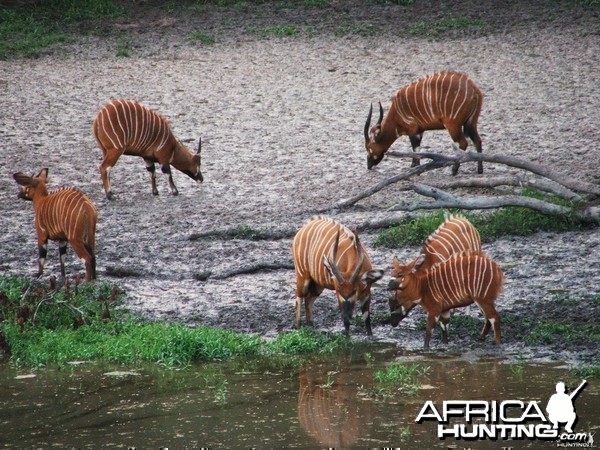 Small bongo herd on the salt lick in the eastern CAR. Our Bongos usually come out either just after a rain or by dawn and dusk.

I whispered to my hunter to stay closer to me and asked with hand signals if he really had a bullet ready. He nodded. As we continued step by step, I felt the pulse increasing for each second. We approached behind the bush, and I could literally feel how something was moving in front of me. I stiffened once again, now only a meter from the bush, trying to see through the green wall. I still couldn't perceive any movement, but I felt there was something out there. The moment freezed, even time itself seemed to hold its breath. I took the last step forward and slowly looked around the bush?br>
The big bongo bull had probably been on the salt lick for an hour. His head was bent when I first saw him, his nose glittering with mineral soil. He revealed himself in front of us like a dark red statue cast from the red African soil, motionless except for the eyelids that were cutting each second to try to chase away the bees that swarmed around the salty soil. Its majestic horns seemed to have no end; they spiraled and went completely out again, a perfect lyre, like shaped by the most skilled artist.

I slid the sticks and placed them to my left in an opening between the leaves. They landed on the ground without the slightest sound and I did not need to say anything, the only thing I did was a sign for my hunter to put up the gun. So he did and saw in the same moment what it was that had stiffened me. A slight gasp left his lips and he looked at me. I mimed two words: å…¸ake him?

The bongo bull gracefully lifted his head and looked around. He had not seen, nor heard us, but he felt that something was close. His large ears were standing out, trying to catch a sound that could betray the unknown intruders. Then he turned his head and stared straight back at me?br>
The 300 grain bullet from my friend's 375 H & H took him in the center of the shoulder, where the spine meets the neck. The front legs weakened first and then the hind legs. With the sound of the gun still echoing in my ears as I had not been able to move my hands and cover my ears, I could see in the corner of my eye how my American friend repeated and, without hesitation, let the second round go. It hit the now laying bongo between the front legs. The pressure wave rocked the entire body and the animal kicked one last time before the last sparkle of life left his eyes.

Calmness settled over the rain forest as we slowly and respectfully walked up to the fallen giant. I was shaking my head in disbelief. The first one to break the silence was my faithful tracker, Mongolo. A cheer of happiness left his lips and this was transmitted to my American friend, who let the gun go and started dancing around in a wild dance with Mongolo and the two other trackers, Lido and Mahamat, who had come running after hearing the shot. This dance was the first one of a whole night of dancing and singing about how the rain forest ghost was killed. The Bongo measured over 36 inches and scored no 2 SCI.

A day to remember the day the King of the Rain Forest died. 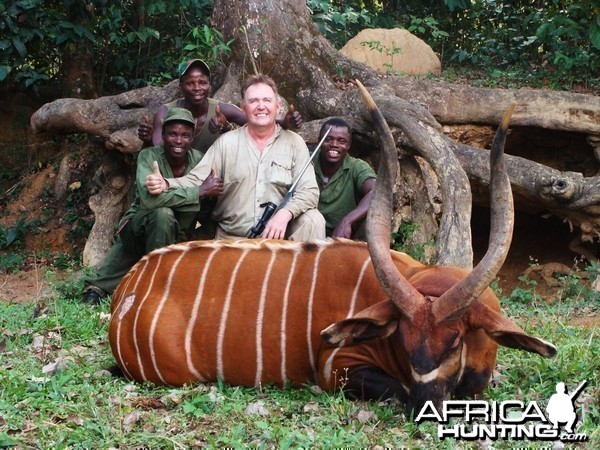 The Ghost of the Forest
Last edited by a moderator: Dec 1, 2016
Erik Mararv
B 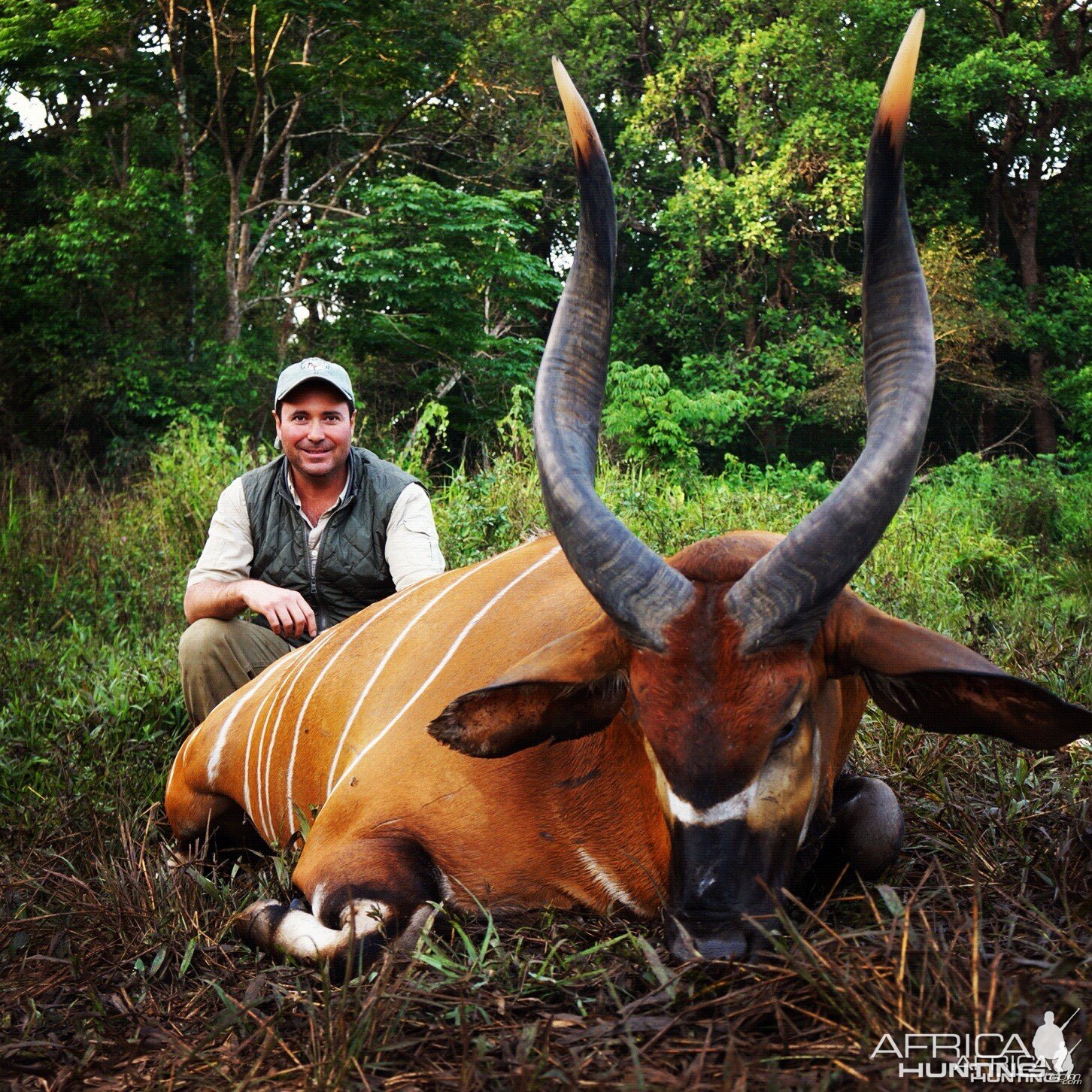 Great story. Beautiful Bongo. A dream animal for me. Thanks for sharing this adventure. very well written.
Bruce

gillettehunter said:
Great story. Beautiful Bongo. A dream animal for me. Thanks for sharing this adventure. very well written.
Bruce
Click to expand...

well done great looking head that will look good on a wall
You must log in or register to reply here.