TANZANIA: My First Safari With Bullet Safaris In Tanzania

Early next morning we were back at it, today looking for nothing in particular, just hunting. I had already taken some nice animals and if I didn't fire another shot would be well satisfied. We hunted a little higher this morning than we had been, the air was cool and the terrain was a little different. We were cruising along when Martin spotted something a couple hundred yards out in the short grass. A nice Duiker was sneaking through the brush, we hopped off the truck and went after him, catching the occasional glimpse we followed along behind waiting for an opportunity. I had about given up when he appeared about 75 yards out crossing left to right, the sticks went up and when he crossed an opening I pulled the trigger. My shot had felt good, I had called it a little low but still in the vitals, I saw him in the scope at the shot leap into the air and reverse direction. These little guys reminded me of miniature whitetails, normally taking off like rockets as soon as they noticed us or lying hidden until we nearly stepped on them, Hilary called them "Flying Duikers". We spent several minutes looking for any sign of a hit, Crispin had decided I had probably missed when Sadiki spotted a tiny speck of blood a little farther out than we had been looking, a short blood trail later I had my Duiker! 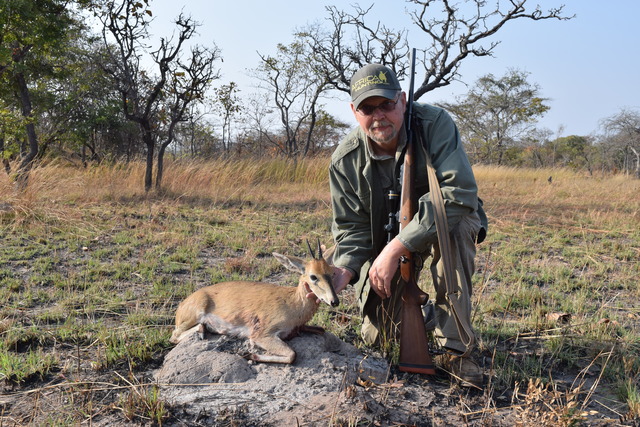 I was shocked that he had moved at all after the shot.

It was still fairly early so we continued on our way, looking for something to chase. We came across a couple of Klipspringer and a big bull Sable but nothing I had on license that I didn't already have in the salt. 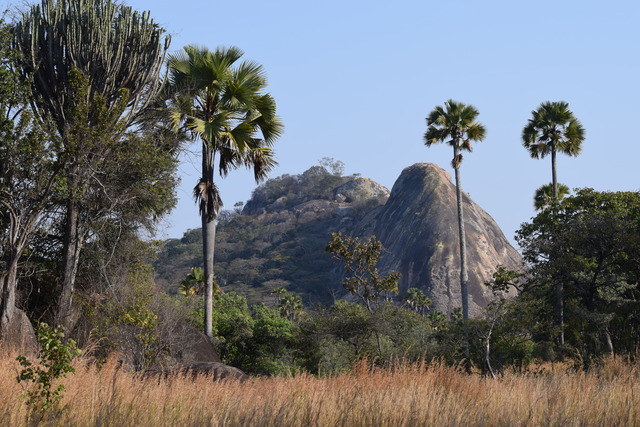 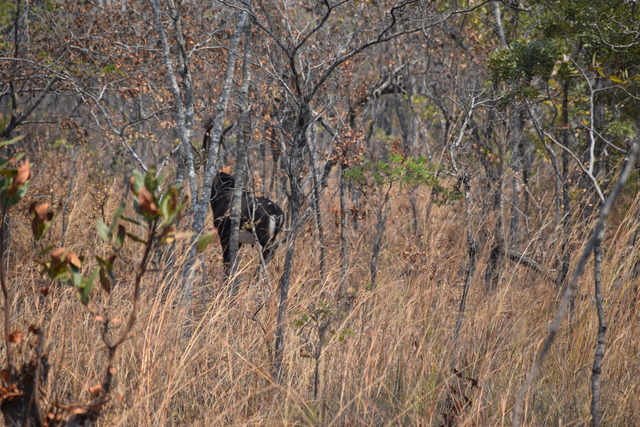 About an hour later we stopped to take care of the Duiker and have some lunch. Whenever I would shoot something in the morning, the guys would take care of it at the lunch break and cook a few tidbits for themselves. Today they roasted Duiker ribs, when the ribs were done Martin came over and brought a stick of meat with him. Crispin explained that the guys wanted to share their meal with me in the traditional manner, Martin cut off a piece of meat and handed it to me, then one to Crispin and finally took one for himself, this process was repeated until the meat was gone. I was already stuffed full from the lunch the cooks had packed for us but I wasn't about to turn down this treat. The meat was delicious and it was a very humbling experience for me, an honor I will never forget. 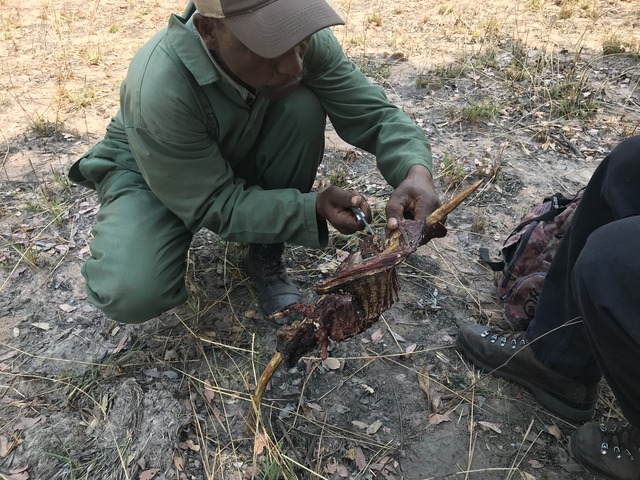 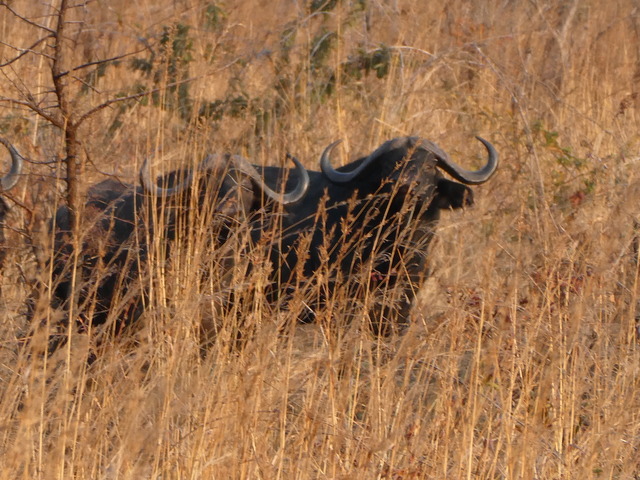 Some of the bulls we saw were very tempting and we saw dozens of up and coming youngsters and breeding age bulls. Late in the afternoon as we headed back to camp another troop of Baboons crossed the road with a large male bringing up the rear, a foot race ensued and just as the big male was entering the long grass he turned to look one last time at his pursuers, this one went down in his tracks without a wiggle. 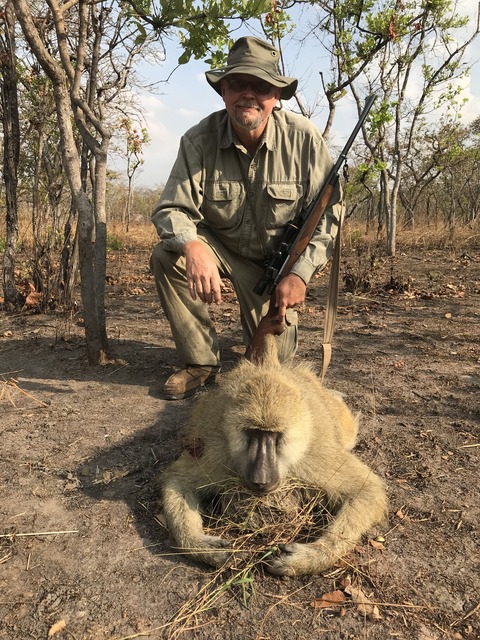 This must have been the second oldest Baboon in Tanzania because he didn't have any teeth either ! Oh well, I guess i'll have toothless bookends. We were still pretty far from camp and it was getting pretty late so we headed back, just as we were making the final turn into camp a huge Hyena appeared out of nowhere and loped across a glade right beside the road.

Day eight, today was to be our last in M'finiki camp, tomorrow we would hunt our way down to Masimba camp for a couple of days hunting Impala. We headed out early looking for Oribi, Crispin had informed me that there was a better chance to get an Oribi here than at the other camp. It was another beautiful cool morning and still very early when one of the trackers spotted a couple of Oribi rams in the distance, I could barely see them in the 8x binocular let alone tell they were rams. We made a fairly direct stalk, I was a little concerned because there wasn't too much cover but we made it to within about 80 yards before the bigger ram noticed something and turned our way, the sticks went up the ram went down and I had a nice Oribi! 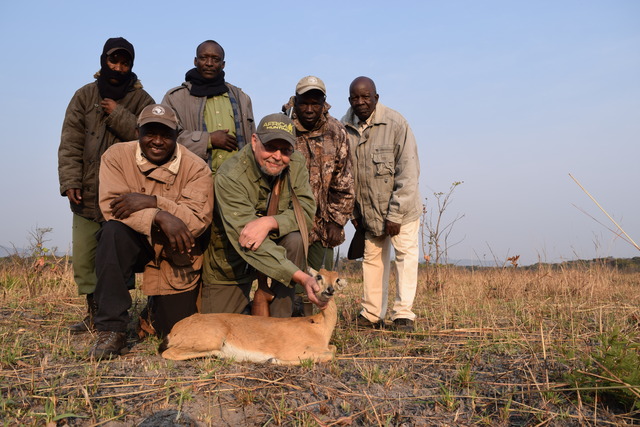 Standing from left are Martin, lead tracker, Modest the game scout, Sadiki, tracker and ax man extraordinaire, Michael the driver, Crispin my PH is kneeling not pictured is Thomas the other tracker pictured below with my Duiker. 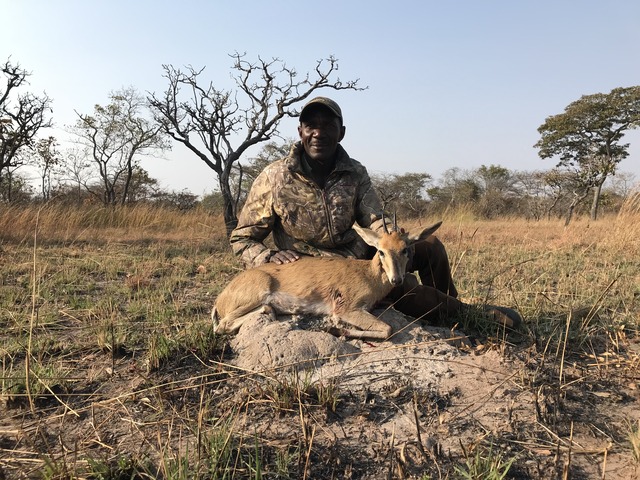 About 9:00 am we stopped to take care of the Oribi, it was starting to warm up a little so we parked in a nice shady spot along a slow moving river, while Martin and Thomas were skinning the Oribi the other guys built a fire and as soon as the skin was off the Oribi they cut sticks and started roasting Oribi "giblets" once the Oribi had been fleshed out and salted we packed up to go. Sadiki grabbed the stick with the kidneys and heart on it and walked over to me, he cut a slice from one of the kidneys and passed it to me, it was pretty good, then he offered me a piece of the heart and I accepted it with more than a little trepidation, I needn't have worried, that Oribi heart was the best meat I have ever tasted, bar none! We got under way again and spent the rest of the day looking for buff or whatever crossed our path. That afternoon we got back to camp just a little early so I got packed up for tomorrows move, had a nice shower and went up to the "patio" for a cocktail. It had been another wonderful day in the bush!

Got to get to Tanzania hunting someday soon...thanks for the report.
K

I am loving this. What a great hunt, that's the stuff my dreams are made of.

A little late to be chiming in, was in Zimbabwe on Safari while you were posting.

Bob T, this was a great hunt! Thanks for sharing it with us!
Africa on my mind.

I was enthralled just reading these posts. Wow what a great hunt. Congratulations to you and your guides.

Hello to you all,

B o b, thank you so much for this wonderful report of a great hunt, congratulations on this.
Always good Shooting and Waidmannsheil

Just catching up with your report.........what a wonderful adventure. Thanks for taking us along!

Congrats on a great safari. Nathan and Hilary make for a great partnership and I enjoyed my 2017 safari with them immensely.

Congrats! The cape buffalo is wonderful trophy! The zebra would make a great rug with the stripping!

Thanks for a great story Bob T. I would love to do something similar one day.
You must log in or register to reply here.