SOUTH AFRICA: Part One of My Report 2014

Well here is part one of my report


A couple of years back I formed a association with a local taxidermist that I got to know through a couple of nice jobs he did for me.
He had also started up a outfitter type business that he and a ex South African catered for overseas hunting which obviously included SA which spike my interest.

My hunting mate was keen to hunt Africa and that rubbed off on me so a plan was hatched. Our first planned trip got postponed with his daughter getting married but 12 months later circumstances prevented him being able to go again but for me the lure to hunt Africa was too strong to be waiting another 12 months so I booked a 12 day hunt spread over two concessions about an hour or so from Port Elizabeth.
Late May three of us departed the MelbourneAirport for Johannesburg. I was accompanied by Cameron who arranged the trip and Troy a fellow hunter who although not living far from my home we didn't know each other.
Neither Troy or I opted to travel with our firearms but a late change saw Cameron travelling with his Browning 243 WSSM.

From Australia we arrived in JBerg before we flew to Port Elizabeth where Paul our host met up with us and shuttled us to his property near Grahamstown an hour or so away.
Our accommodation and facilities were perfect for our stay with our welcome making us feeling comfortable and keen to amongst it.
First job was to choose your rifle and head out to the range and familiarize ourselves with them having a few shots checking their accuracy. I opted for a sweet Kimber 308 fitted with a Swarovski 6x scope while Troy chose a 270.
All went well shooting out to a couple of hundred yards off a concrete bench. This was my first encounter with a centrefire fitted with a suppressor and I think I could say the same for Troy. Unfortunately in Australia we don't have the good sense to lawfully protect our hearing nor enjoy the benefit of reduced recoil of a suppressed firearm but that's another story.

That evening we discussed the lay of the land and later that evening our PH's arrived and the time was set for the next morning for the first of 6 days hunting there. Troy paired with Bevan and I paired with Patrick. 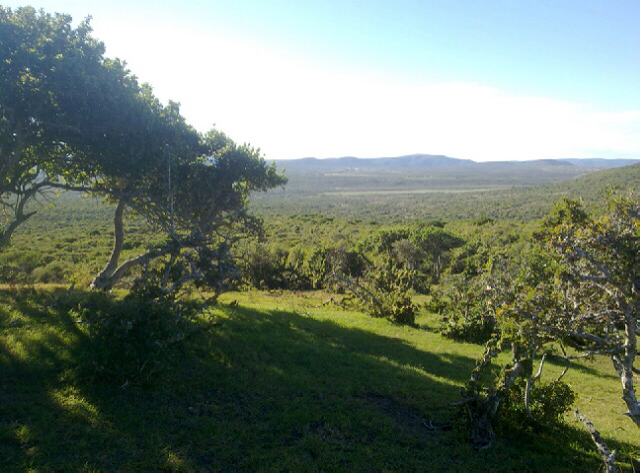 Our hunt package was open ended in the fact that we were open to hunt what animals we liked paying the trophy fee applicable rather than a set species and number package which suited me perfectly because I was expecting to be content with what ever came to be although a Kudu Bull was a desire.
Not trying to build my expectations too high to avoid disappointment I focused on enjoying the trip and hunt rather than what was harvested but I was planning on low cost animls rather than the big dollar ones.
The first 2 days for me proved frustrating with the thickness of ground cover posing a real challenge for my eyes sight and even with the use of binoculars seeing game pointed out by Patrick was proving difficult for me. When I hunt on my own I never realize what I don't see but not seeing what others can brings frustration and my opportunities were more difficult to come by than I had hopped.

Patrick worked hard for me and coped well with this issue making the best of what we had. We used the elevated areas to scan the cover below and ahead of us as the general visibility on the flat ground never allowed much range.


Troy on the other hand was having a ball. Each night over the evening meal we discussed what he had taken and how the hunt unfolded which although I was more than pleased for him it added to my frustration considering I had had one missed shot at a Duiker till that time.

Day 3 Paul the property owner decided to hunt with us. We had seen the usual Kudu cows and the odd bull way off in the distance but nothing that presented an opportunity. Paul planned a bit of a driven hunt where he sent one off his trackers and Patrick around to a gully well below us that we over looked with the hope something could be pushed into sight and hopefully into range once they moved from below.
This produced a Jackal which I was able to get in the scope but it was far too quick for me. we did get glimpse of Kudu walking though the bush but again nothing that could be considered a high percentage shot or the chance to access the animal as a trophy.

That afternoon I made my first kill. A hill side clearing revealed some Warthogs so we stalked our way in to a position where a shot was on and from 60m I had my first African kill. With a bit of relief and sense of achievement I was much happier and keen to add to the tally. 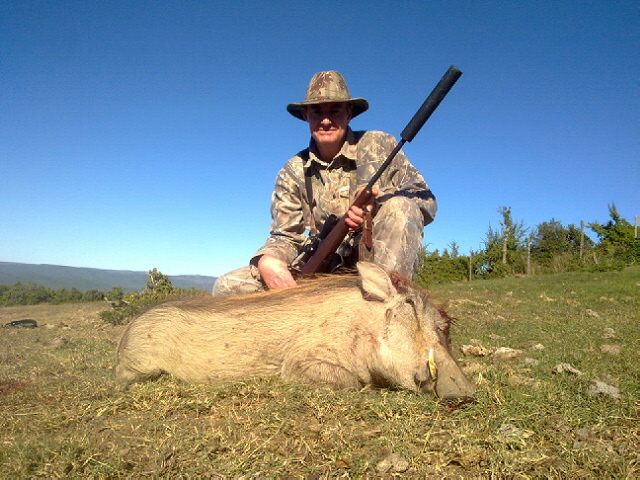 Day 4 saw a change with Troy and I swapping ends of the properties. Patrick and I were away at daylight. This proved to be vastly different terrain being much steeper county with hill faces opposite you so instead of looking across cover you were looking into it. This suited me and my eye sight better and it wasn't long before the number of animals I was spotting was building.
Still early morning with the sun working its rays into new ground a Bushbuck was spotted at 170 yard on the opposite face. No excuses now. The rifle was placed on the sticks and the POA was made, I squeezed of the shot to the pleasant sound of a hit. It staggered and another shot was quickly prompted by Patrick and taken.
Down it went and what a thrill. On inspection the first shot was a perfect chest shot and the second a straight on neck shot. More to the point, what a beautifully marked animal those Bushbuck are. It was a good example of one and a true trophy which I was excited and honoured to harvest. 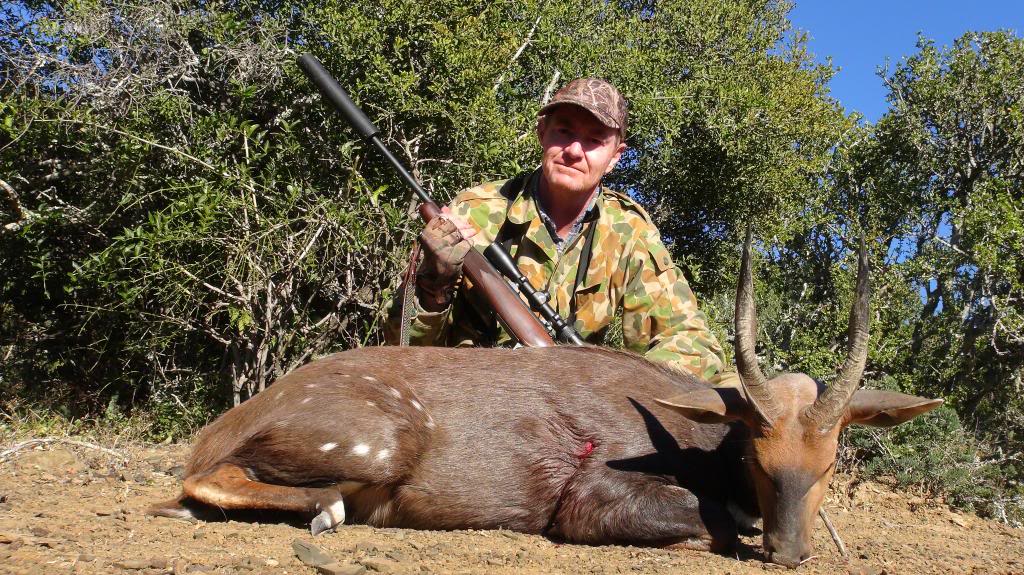 My next days hunt yielded no opportunities until very late that day. Troy and I both headed out to this new ground where we split up. The plan was to overlook the reasonable cleared area till the end of shooting light. Patrick and I watched a couple of female Kudu and a female Nyala mixed in with the odd small warthog but nothing we were after.

During the fading light of late afternoon my phone rang breaking the silence and it was Troy asking if I was targeting a Nyala. With that we headed back were Troy was stationed where they had been watching a good Nyala Bull but it wasn't visible by the time we arrived. With the lateness of the hour, light was becoming an issue although my luck was in and it represented and a shot was on. I made good with the shot with the thud of impact Not a dead right there shot but a well placed solid hit and given the value of our PH's and tackers I was confident of a recovery.
Within the half hour we were dragging the beast from very thick thorny cover in the dark. What a beauty it appeared to be in the dakness and the next morning I was ablr to have some pics taken after it spent the night in the chiller. 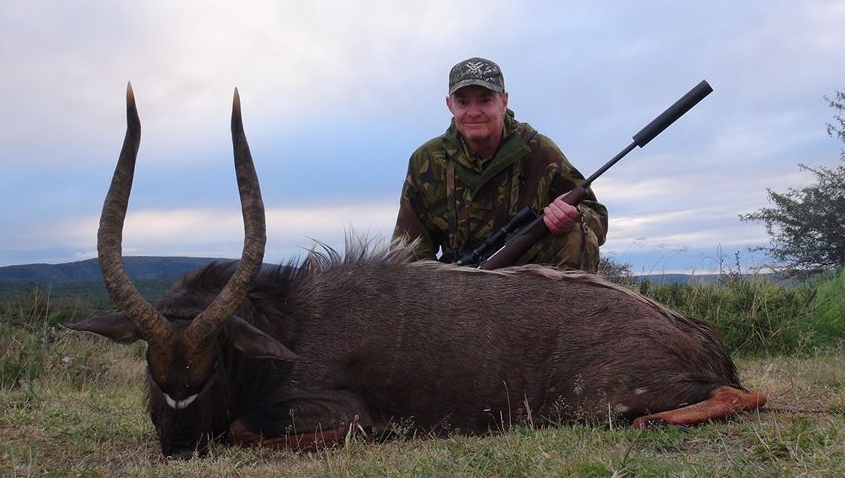 I have since gained a better grasp of how good this animal was and how elusive they can be so my gratitude for Troy's consideration to me was and still is greatly appreciated.

Day 5. With Troy having already making a number of kills including a Kudu. Impala, Duiker, Steinbuck and Warthog he was needing to go off property to encounter some Wildebeest elsewhere before we moved to our second concession so Patrick and I returned to our first hunting area in search of a Kudu. A Kudu had still eluded me but my focus was still there. My best chance to this point had been a Bull at 300y but at that early stage of the trip I passed up the shot hoping for something at 200 or less might have been on the cards.

Late morning Patrick had spotted a Bull all be it 300y away again. By now I was well aware that opportunities to get a Kudu Bull in your cross hairs weren't common so at 300y you need to put your best foot forward and take the shot. The shot would be across a gully with a stiff right to left wind gusting.

As it turned out my biggest challenge was finding the bloody thing in my scope. Despite Patrick having it lined up on the stick for me it still took me three goes at looking for it before I saw it. Wasn't that frustrating for all concerned although Punsie our tracker thought it was hilarious. Long story short the shot hit its mark and Punsie headed off to locate it. This pushed the Kudu along to its final resting place and the Bucky was sent for before the mandatory photos were taken. What a terrific feeling to harvest such a awesome animal although no giant to me it was huge. 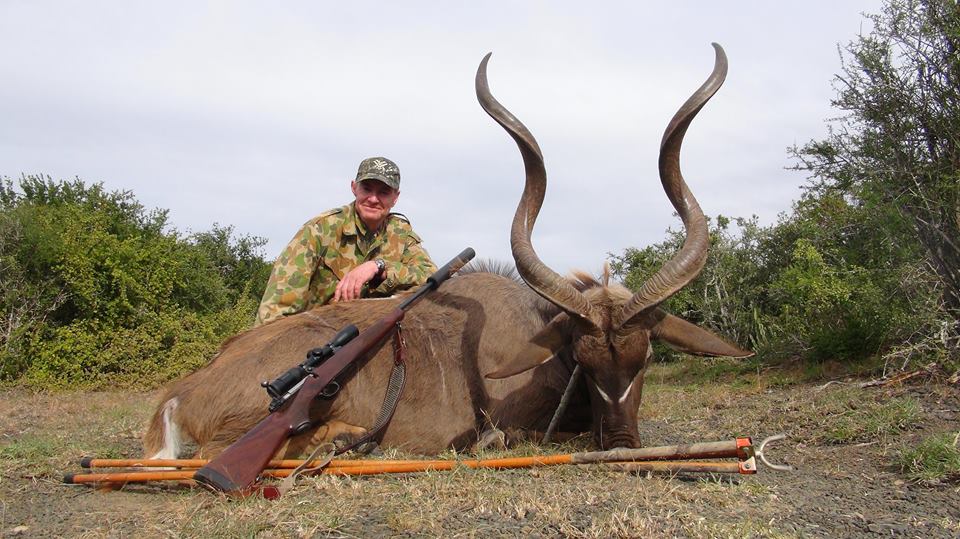 By now any frustration and pressure were alleviated and the thrill of the trip was being fully embraced. Before we moved to our next hunting concession I was able to take a Duiker and a hard earned nice Impala which tested the trackers skills. It was a good example of one.

Troy harvested his Wildebeest off property and whilst there took a exceptional Bushbuck as well so between us we had both done very well at our first concession dispite my slow start.


End of part I

Thanks for the report and sharing your hunt!
Bowhunter addict

Welcome vicfox. Enjoy the site and thank you for posting the report and photos.
Cheers,
Mike

I am envious of your Nyala! I would certainly like to go back and hunt them and another Kudu. Thanks for the report.

Thanks for sharing your hunt with us.
Nice trophies. Congratulations.

And I can relate on the eyes... I had lasik and my eyes have never been the same. very frustrating to not see what others see, but you just have to hang in there!!!
HUNTERS make importation bans work!
You must log in or register to reply here.