Howard and Magi returned to hunt with @KAROO WILD Safaris on their 5th South African hunting safari. Howard has hunted over 50 plains game species with Karoo Wild Safaris since December 2015 starting with a common blesbok hunt and has taken multiple numbers of each species. It was time to move onto more dangerous game...the formidable cape buffalo.

High up on our wish list for Howard's 14 day hunt was a large kudu, gemsbuck, sable, bushpig, baboon and a few impala and springbuck. Howard hunted plains game with his Savage 243 and 7mm and used my 375 Ruger for his buffalo hunt.

From previous buffalo I've hunted, I knew to expect a hunt that would take a physical toll on the hunter, guide and trackers. A full day in the April sun is a challenge in itself. It would require lots of glassing and hiking through rough terrain, patience and faith in the plans made. Buffalo in this area are known to move and graze almost exclusively at night and we would have to be on our A-game around sunrise and twilight. In South Africa, the sun sets quickly on your buffalo stalk!

Here's a daily account of how our hunt went -

Went to the range. All good, only 2 shots needed to check the zero on Howard's rifles. Howard handled my 375 Ruger well, despite the obvious recoil. Wow!! Watching Howard shoot, I'd taken for granted how much more a 375 Ruger recoils than a medium bore hunting rifle. Stalked an impala herd but got properly busted. Moved in on kudu in the afternoon but couldn't find a bull that met our criteria of being larger than what Howard's shot on previous trips.

Stalked in on a sable herd, bull was on the fringe of the herd of cows and Howard nailed the shot. Bull was an absolute beast, 43" with wide horns. Get in close on some impala that late that afternoon and we wait patiently, Howard making the perfect shot.

Get into an area well before sunrise. Spot a large herd of Buchells zebra but they weren't receptive to our stalking antics and high tailed it up the closest mountain. Later we used a dry river bed to get close in on some springbuck. An 80 yard shot, how often does one get that close to springbuck? An old springbuck ram with fighting scars. Howard has hunted at least 5 of these and delights in every one of them.

That afternoon we walk dead slowly in search of a common duiker. Walk, stop, glass, walk another 10 feet and repeat the process. These animals are noise sensitive. The most widespread and common of Africa's antelope and one of the most difficult to hunt.

One pops out the thick riverine bush at close range, 16 yards. I can't judge the trophy and we wait for an agonizing few minutes with the duiker facing away in a slight depression, his vitals slightly obscured by a bank of sand. He turns, he's a big ram, horns level with the ears. Howard fires but the shot connects with the sand bank in an explosion of dust. That's only the second shot I've witnessed Howard miss in 5 years of hunting! The man is human.

We travel to a game reserve on the Orange River to hunt buffalo. Lindsay and Magi spend the night at our guesthouse in Graaff Reinet and the next few days galavanting at the exclusive Mount Camdeboo Game Reserve where they have sightings of lion, rhino and other species in Camdeboo Mountains. That afternoon we hunt a golden gemsbuck. The wind blows our first stalk but we move around and Howard bags a world class gemsbuck.

Mynaard joins us that evening for our buffalo hunt as a second PH and we discuss our plans for the next day over a fine meal of fillet steak and some South African red wine. 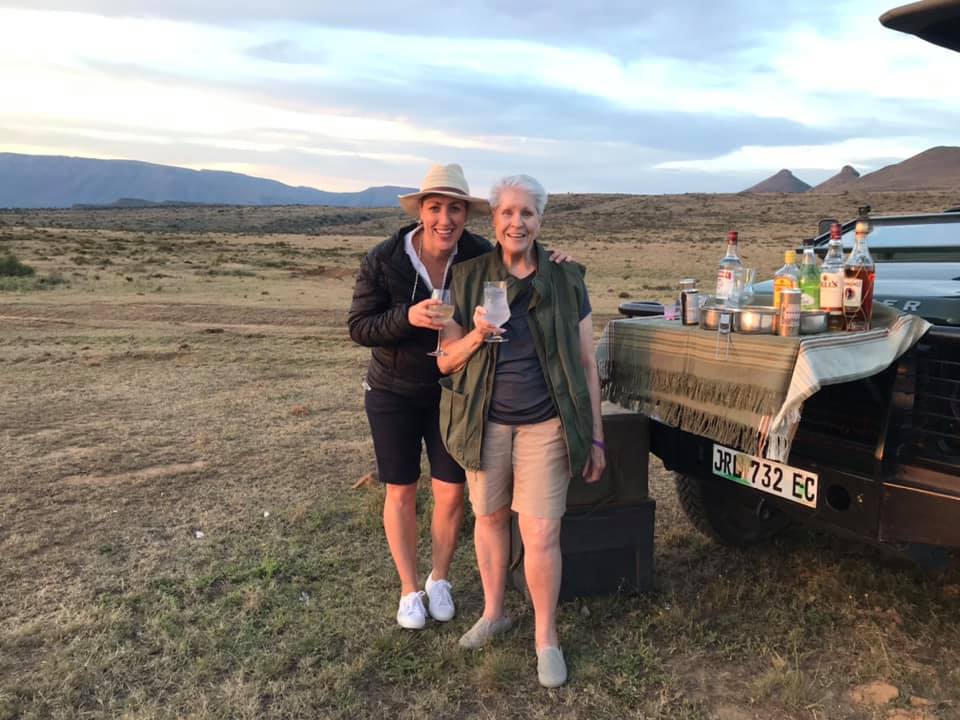 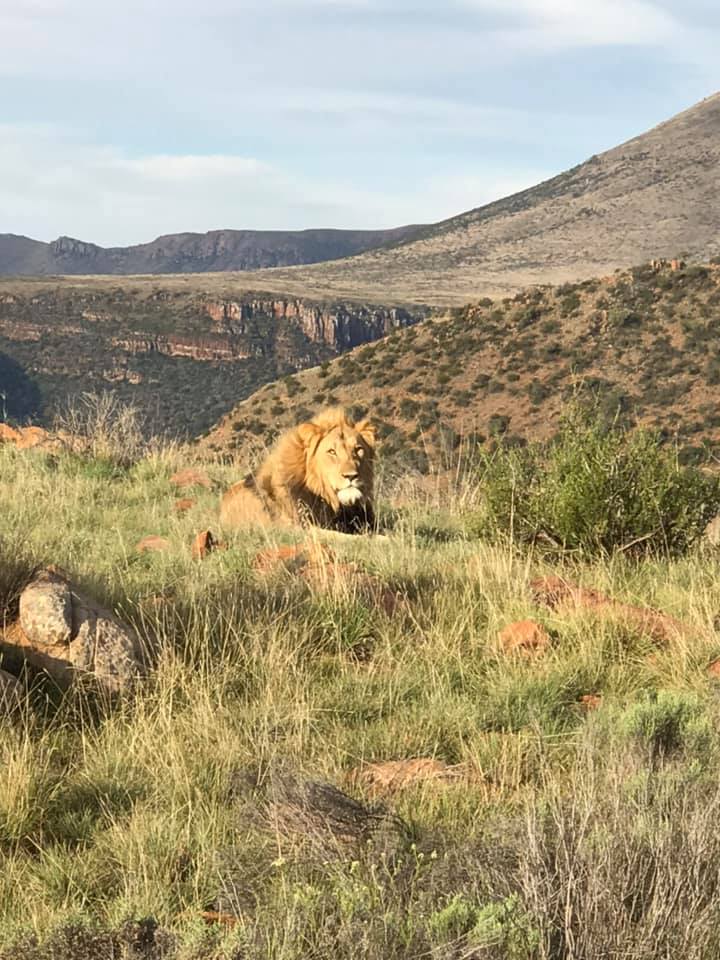 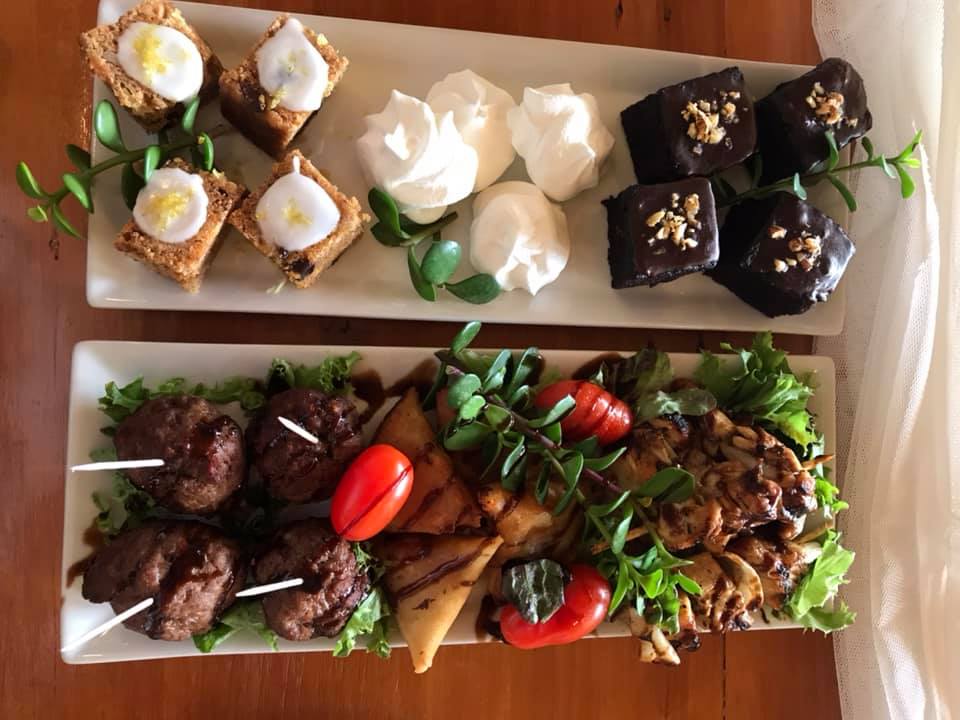 We're up at 5am and we're onto a herd of 9 buffalo cows and 4 bulls. By late morning, they're bedded down in a riverbed and we're ahead of them waiting for them to emerge from the midday heat. It's hot! We're directly in the sun, without food and drink for several hours and I climb out of the ravine to get refreshments from the vehicle, a mile away. On the ravine edge and out of the protection from the wind now, they somehow catch my scent and clamber out the opposite side of the ravine and disappear. I'm furious with myself.

Late that afternoon we're onto another herd. Watching them bedded down, trying to predict which way they'll graze when the sun starts dipping. We get it wrong and they graze off in the opposite direction. We follow, using a river bed as cover. Not knowing if they're around the next acacia bush is daunting and the going is slow. The sun sets on our stalk and we break cover only to see them 300 yards ahead, slowly moving to freedom.

The next morning follows a similar pattern. We're spot another herd and we flank them, getting into a good position ahead of them. They hang around one particular spot for an hour. Not sufficient cover for a stalk, we wait...

Two bulls peel off from the herd and disappear into a valley. We follow and soon spot them bedded down under a tree.

We move to within 130 yards and try identify a hard bossed, old buffalo bull. The one bull is super wide, at least 44 inches but he's not hard yet. We watch him for another hour but his boss isn't getting harder. He's not old enough. Mynaard and we both realize we're making about to make the classic error of not trusting our first impression and we decide to leave, buffalo - less. I'm thankful for my PH buddy who I can bounce buffalo thoughts off.

We have lunch under an old acacia and take an afternoon nap. The crickets are singing now and it's a warm afternoon. I dream of failed buffalo stalks. We're onto the same herd after sunset and we're close now, 30 yards or less. But we're running out of light and I know there's no way Howards going to see a buffalo in this light. I can barely see them. We extract ourselves from the stalk, mindful of not being tramped into buffalo dust in the process. We get back to the lodge late and we're sun hammered and properly buggered but the beer and company is good.

We wake at 4m and decide to check the 375's zero. It's dark and we direct the vehicles lights at the target. I fire 4 shots and the rifle is a little off. Good thing we checked. We head to an area known for buffalo and leave Howard with Mitchell. Mynaard and I climb a hill to get a better view of the area. Mitchell comes onto the radio and says they've seen a buffalo bull walking up to us from their position. They couldn't get a shot.

We wait and the hear the buffalo move diagonally up the hill below us. Howard and Mitchell climb up to our position and we follow. The bull hears us and runs into a small wash below us. Theoretically, he has to come out the other side but it's a long way off, 230 yards or more. Way more than the 100 yards we normally like to get within. I set the shooting sticks and rifle up at the exact moment the bull emerges from the wash. I asked Howard afterwards and he said that by some miracle the cross hairs of the riflescope were exactly on the buffalo when he shouldered the rifle. The buffalo pauses for an instant, turns to his left and gives us a buffalo stink eye. Howard fires, the bull runs 20 yards and collapses, full death bellow. It's the most instinctive shot I've ever seen anyone make and far outside our normal comfort parameters.

The physical toll this 78 year old man had to endure to get his buffalo, it was just meant to be. Howard earned his buffalo the hard way and what a magnificent old beast he was, wide horns with worn-off tips and a beautiful hard boss.

We're in wait for a baboon and get one at 10am, an old worn out male. That night we sit in wait for a bushpig at the bait sight. After six straight nights of feeding on the bait, the family of bushpig don't come in. A swarm of brown locusts has recently invaded our area of the Karoo and the only logical explanation is that they're feeding on them.

Howard puts the slam on another common springbuck. That afternoon we stalk in close to a large bachelor herd of impala. At 140 yards they wind us and move rapidly away, pausing briefly. It's a confusing moment and knowing Howard also wants a management impala for the rug, I instruct him to shoot the largest one he sees. Howard chooses well and he bags himself another nice impala trophy.

We roll the dice with another bushpig bait site but pull up empty again. On the return trip to the lodge, we check the camera on the previous site and they're in feeding at 9pm! That's hunting...as frustrating as it was in the moment.

Early morning, it's a chilly and we sneak up on a kudu sunning himself in cover of some acacia thicket. We bide our time and he steps out into an opening. It's a 50/50 clear shot and Howard nails it, the bull hitting the ground, writhing in a swirl of dust. A magnificent thick-necked kudu, exactly what Howard was looking for.

We spend the day in camp. Paul, form Relive Africa Taxidermy, joins us for lunch and we discuss Howard's taxidermy options. Hank Daries, from Ilungela Tours, arrives that evening to take Howard and Magi on their annual tour of Cape Town and the Franschhoek winelands.

It's been an African hunt to remember, perhaps the best Howard and I have shared. We look forward to our 2023 adventures as we bid our friends farewell.

Victor, like the write up and the photos, seams everyone enjoyed themselves!!!

Good animals well done.
Keep the wind in your face and enjoy your hunt!

Congrats to the hunters and the outfitter! Looks like a great buffalo for sure!

Congrats to you and Howard. Hope I still have it in me to do a hunt at that age. Nice buffalo.
Bruce

Congrats to all on a successful safari. Thanks for posting.

gillettehunter said:
Congrats to you and Howard. Hope I still have it in me to do a hunt at that age. Nice buffalo.
Bruce
Click to expand...