Bob, from Nevada, returned to hunt with Karoo Wild on his second hunting trip. This time, his friend Joe, from Oregon, joined him. Myself and tracker, Bankies hunted with Bob on his hunt for tsetsebe, mountain reedbuck, bushbuck, klipspringer and steenbok. Arnold hunted with Joe and tracker, Mitchell. They were after kudu, zebra, gemsbok, springbuck, bushbuck and impala.

Bob hunted with my Sako .270 and Brno .243 for the smaller species. Joe shot with my 7x64 Brenneke. Day one was eventful with Bob and I travelling four hours to an an area where tsetsebbe occur. For it's obviously unattractive looks tsetsebbe remains one of the least hunted antelope in the Africa. This was my first attempt at hunting one and I felt a little trepidation. Tsetsebbe are notoriously difficult to sex and picking a bull would be tough. We found a herd on the grassy plains relatively easy but watched them for a long time trying to ascertain the bulls from the cows. In truth, the difference is easy to see in the thickness of the horns but with no prior experience to draw confidence from we waited until a big one waltzed across the edge of the herd to begin sniffing some other ones. I whispered to Bob to take him before he disappeared into the herd and Bob duly obliged, the 130 grain bullet putting him down. Turns out they're not ugly at all, just attractive in an unattractive kind of way. Joe and Arnold had a good day as well with Joe taking a good impala ram as his first African antelope. 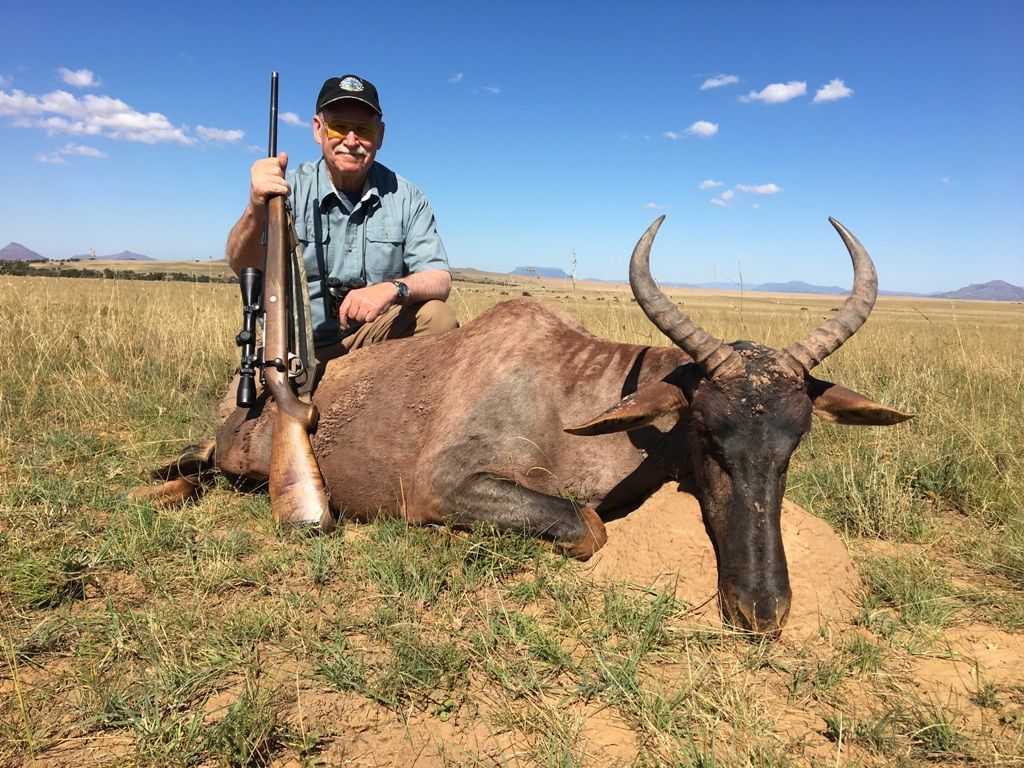 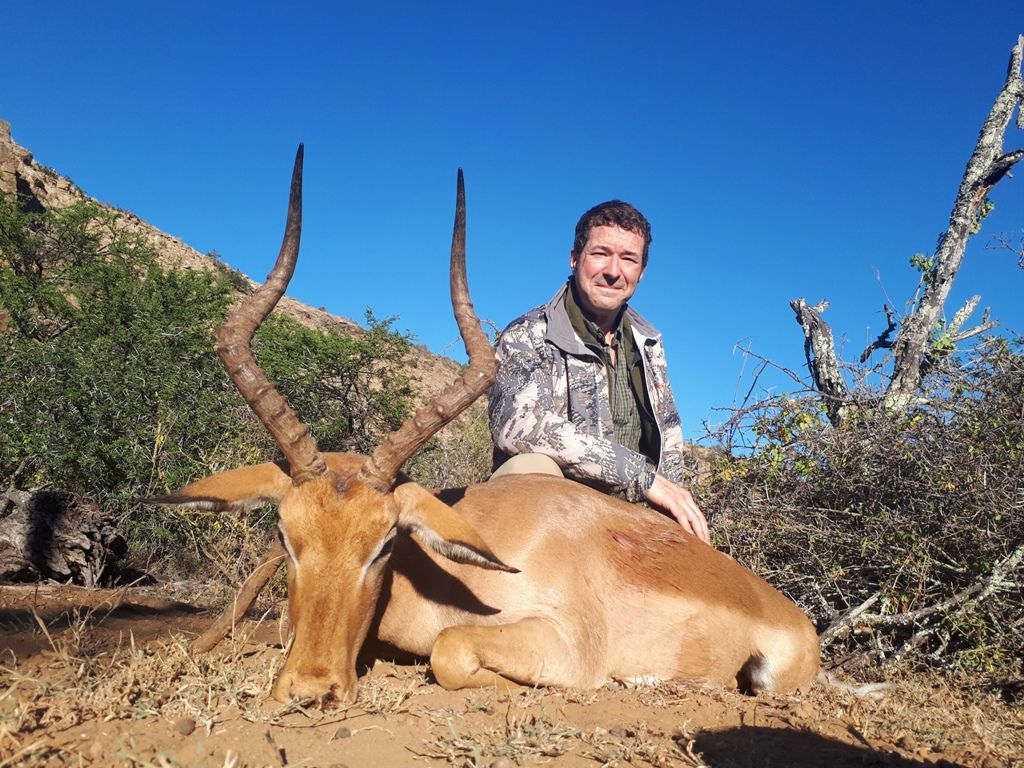 Early the next morning Bob and I headed to the coastal area for two days of bushbuck and mountain reedbuck hunting. It was a cold windy day and around midday it began raining in ernest. We hunted through the bad weather and although we saw a number of animals, bushbuck were scarce as they sough shelter from the elements. We spent that night at a lodge beside a small lake. Joe had himself another successful day as he and Arnold hiked high in the Winterhoek mountains and shot a massive kudu bull. They had to cut it up and pack it out the hard way. 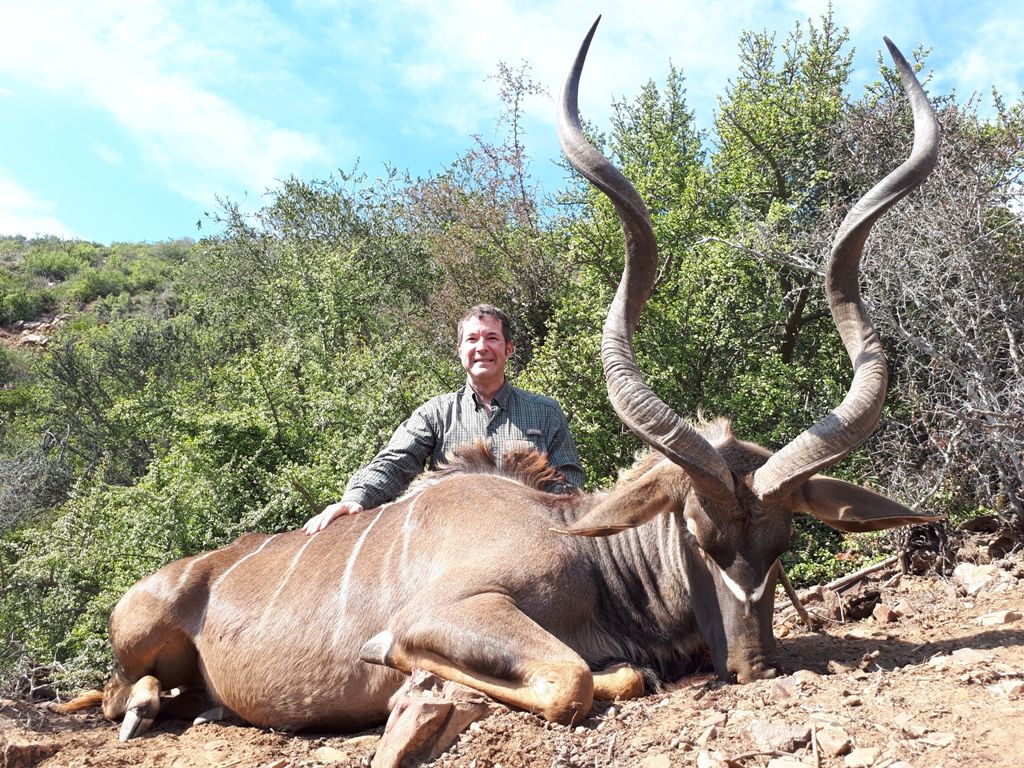 Bob's bushbuck voodoo continued the following day with the bad weather still lurking around. What is is with Bob and bushbuck? Bankies's super sharp eyes spotted a beautiful mountain reedbuck laying down seeking shelter from the rain. We snuck up and once Bob spotted it's dimunitive frame lying in the grass, he wasted no time in making a good shot. What a magnificent mountain reedbuck he was! 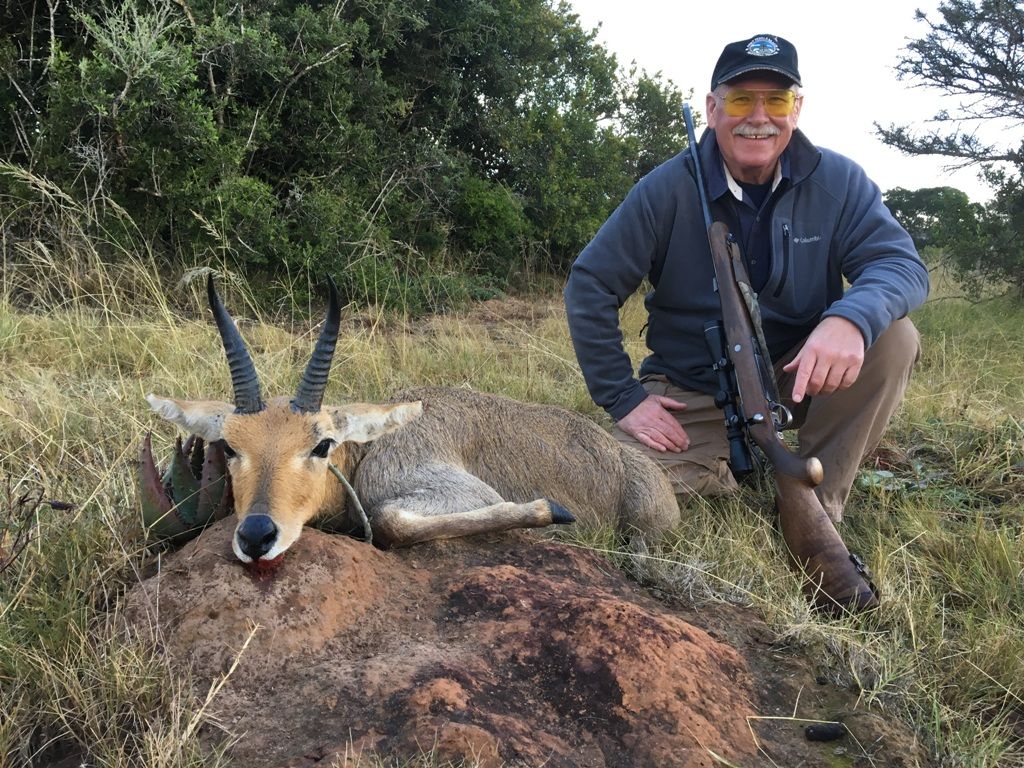 With the rain pouring down we headed home. We got news from Arnold that him and Joe had taken a bushbuck ram that morning. Later that afternoon, Bob and I hiked up a few miles up a valley floor in search of klipspringer. We saw several but no big rams were spotted. We were looking for bigger and with lots of time in the hunt, decided to hold out for a good one. Arnold and Joe got onto a herd of burchells zebra early that afternoon and Joe made another terrific shot to get a beautiful zebra. 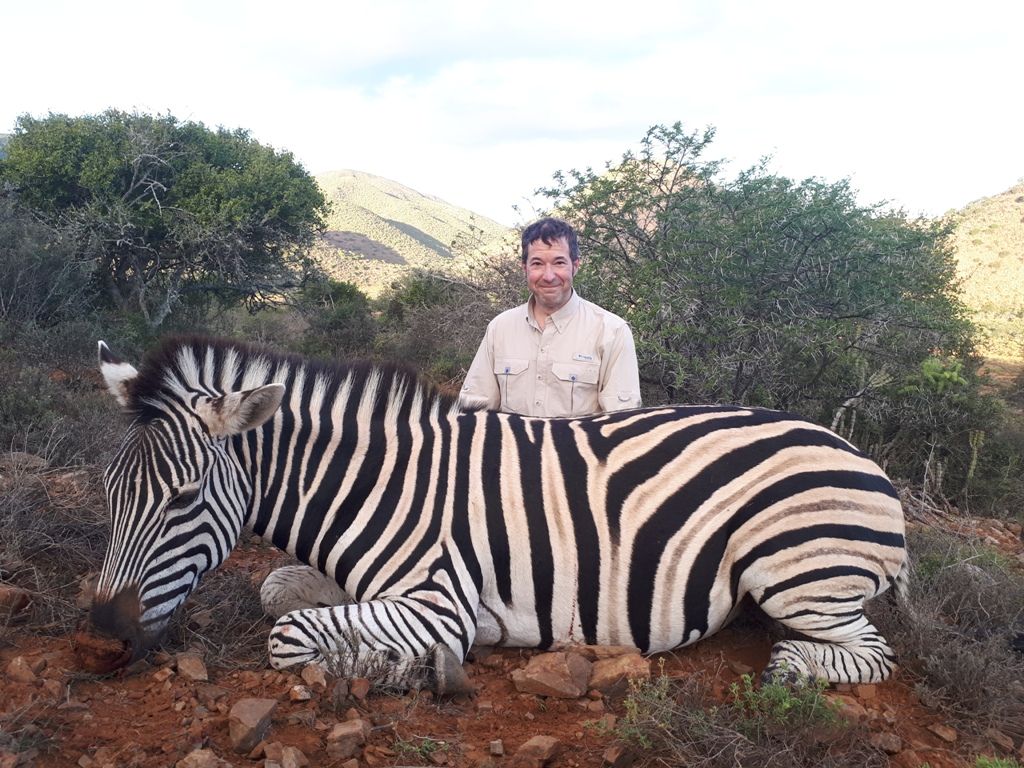 Determined to break the bushbuck spell we found ourselves in, I decided to try my most successful spot for bushbuck. I've had incredible luck in this area in the past but was reluctant to push it too far. We headed out and with the morning sun warming the hill directly to the west we began seeing bushbuck by the dozens and it became apparent that we were in the right place and more importantly when it came to bushbuck...at the right time. We doubled around the hill and hiked along the crest peering down into the valleys. I froze...two hundred yards out on the opposite side of the valley was a black bushbuck. We crouched down and set up to shoot. We soon spotted another ram moving in the bush below him. The first was bigger. He was just disappearing behind a bush as we refocused our attention on him. We watched him for what seemed like an eternity as he browsed and moved between bushes, never giving Bob a good opportunity to take a clear shot. A nervous thought briefly swept through my head. Was this going to be another Bob and Vic busted bushbuck hunt? Then suddenly he was walking in a straight line, a clearing in his path 20 yards ahead and Bob focused his attention there. As he hit the clearing, Bob's shot sounded and the bushbuck ran over the crest of the ridge. From the reverberation the shot made, we knew he was hit but it was an anxious few minutes before we found him expired near the clearing. An old, dark bushbuck. What a hunt it had turned out to be. 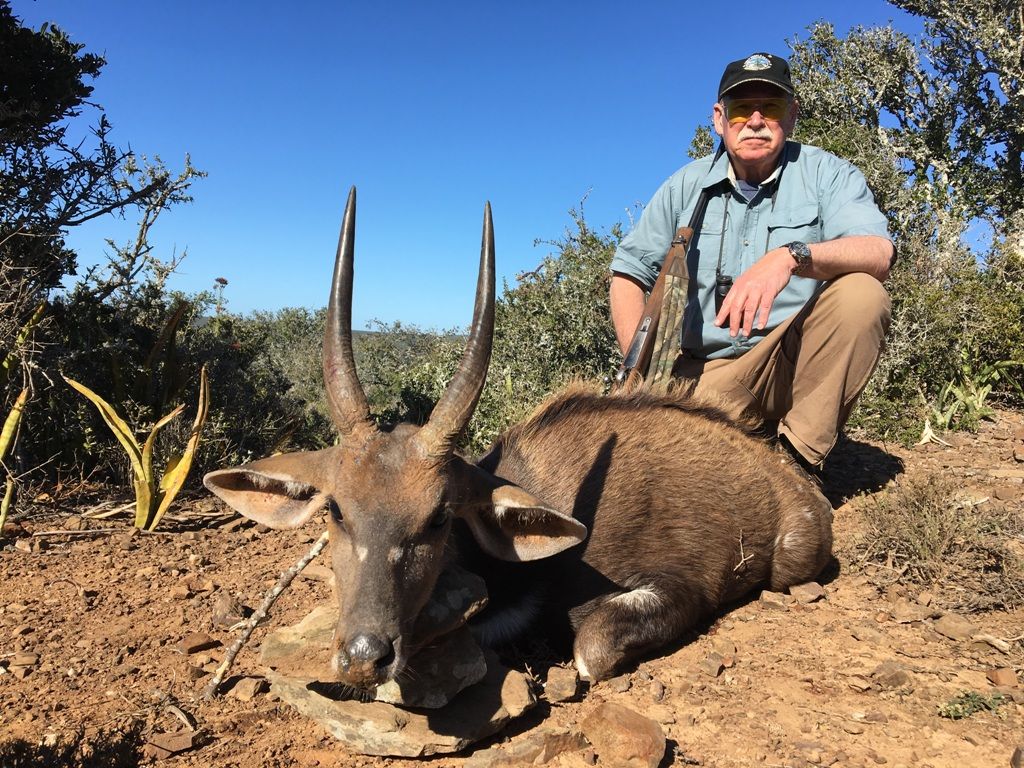 Late that afternoon, we went in search of klipspringer again. We saw several pairs, with youngish rams as part of the breeding pair. We were returning home when the shrill whistle of a klipspringer alerted us to two klipspringer on the rock face above us. Bob made another good shot to get a magnificent klipspringer ram. 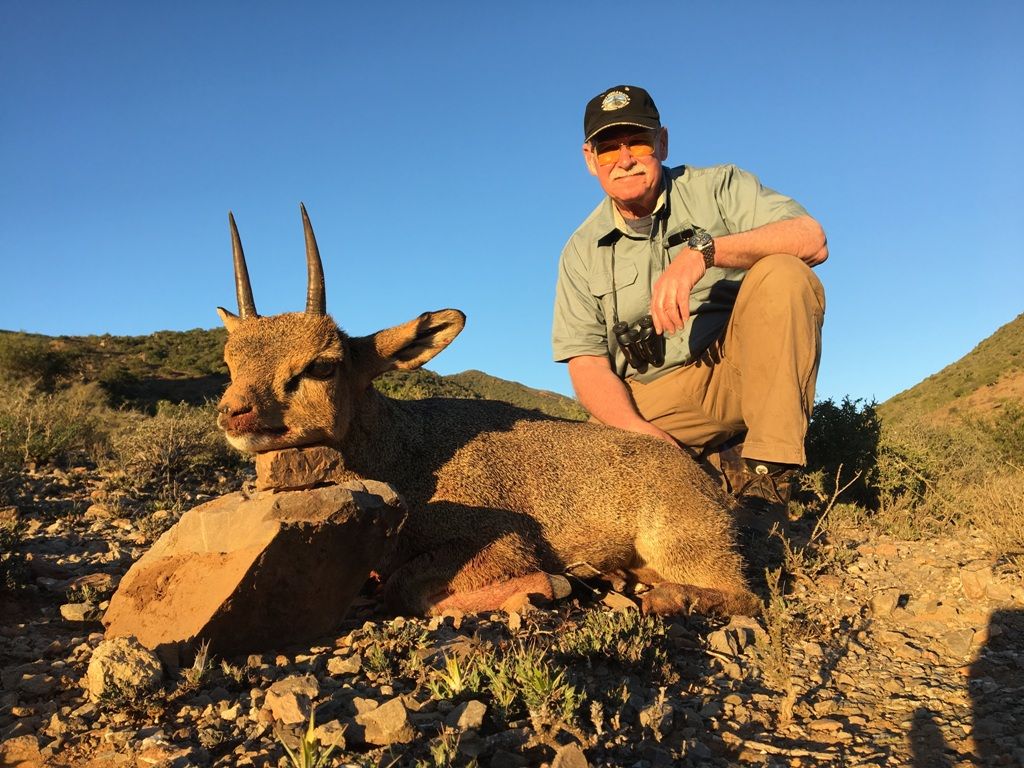 Joe hunted cape springbuck that day. It proved a tricky hunt, multiple shots were fired but Joe got his springbuck. Well done. 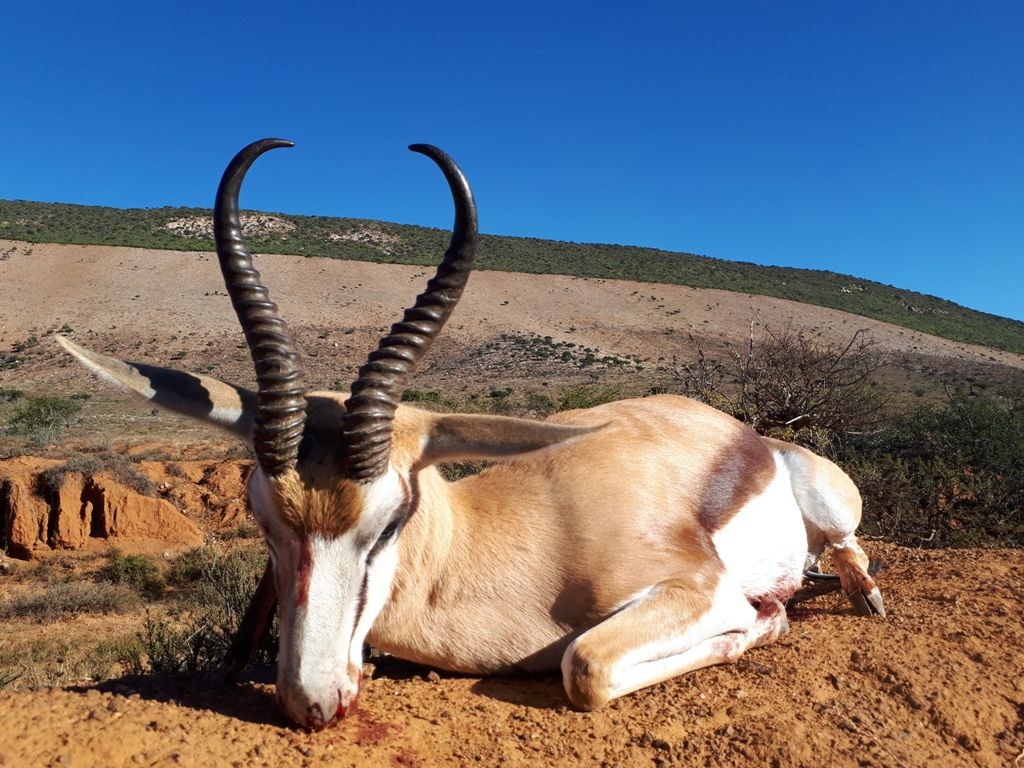 The following day, Joe and Arnold went in search of gembsuck. Bob and I were looking for warthog in the same area. Although Bob and I were unable to find a good boar we saw several warthog boars and had good sightings of elephant, rhino, giraffe and plains game. Joe and Arnold stalked a magnificent gemsbok bull early in the morning. The first shot didn't find the vitals and they tracked the wounded gemsbok for several hundred yards before getting a kill shot. Joe, Arnold and the trackers showed great skill and stamina in tracking a wounded gemsbuck in difficult country. 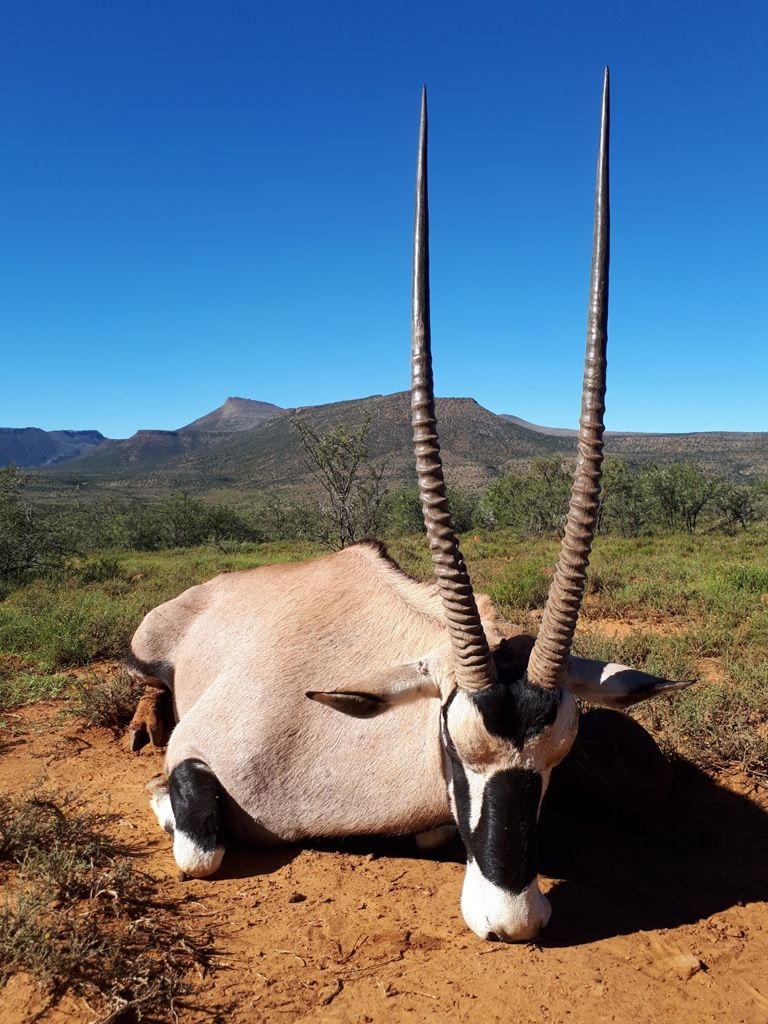 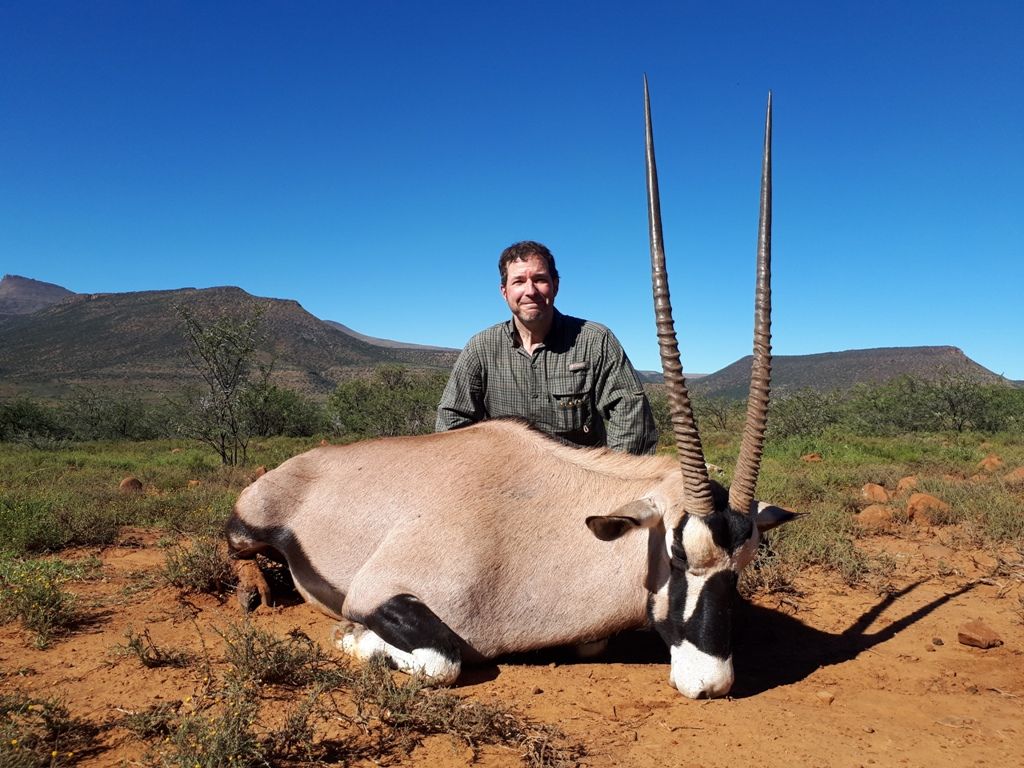 The following day Bob shot a beautiful steenbok ram. He's know well on his way to hutning the "tiny ten". 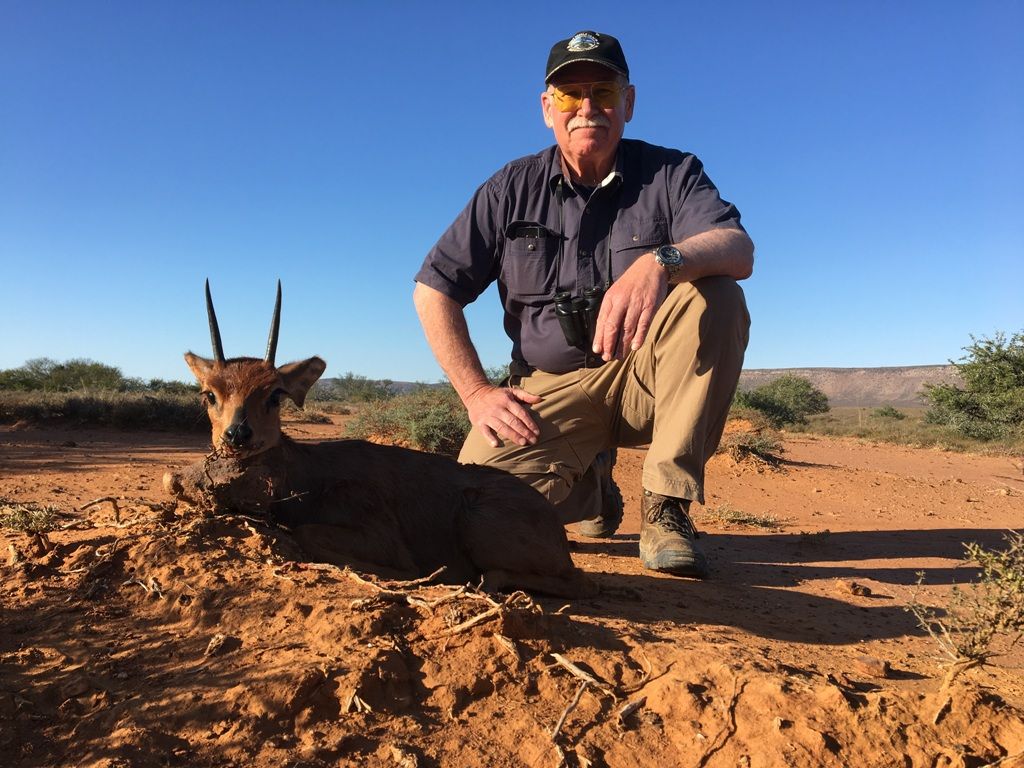 The following day, Bob, Joe and myself visited Addo Eelphant Park. We had a spectacular sighting of a hundred elephant at one waterhole with the youngsters swimming and splashing each other.

Another memorable hunt comes to an end and we hope to welcome Bob back soon someday. He's running out of animals but I know it's the hunt and the experience of it all that brings him back, not the trophies. The heart of a true hunter.

It was terrific meeting Joe and spending time with him camp. We hope he returns to Africa someday with his family.

Having just completed my third African adventure and second with Karoo Wild Safaris, they are, for me, the go to provider of quality hunting experiences in South Africa. Victor and the staff will hunt as hard as any client wishes to be successful on the animals chosen. Or, at the clients choice, they will operate at a slower pace that again matches the clients capabilities and interests. With access to a variety of concessions spanning a very large geographical area virtually any animal can be sought after. Victor, and other PH's as needed, are highly qualified at judging trophies and won't suggest taking any animal that is not of the class the client is looking for. The hunter is never rushed to take a shot and the final decision is always up to the client. Accommodations are amazingly comfortable, the meals delicious, the ambiance very enjoyable and the company of Victor and his wife Lindsey welcoming and gracious. It is entirely likely that I will head back for my fourth trip to South Africa in 2020 and I will absolutely book with Karoo Wild Safaris

Really nice Klipspringer, and beautiful trophies all around. Incredible memories as well! Thank you for sharing their hunt.
NO. I'm not a good shot, but I shoot often. Teddy Roosevelt

Great hunt. Beautiful animals and good times between friends. Doesn’t get much better. Thanks for the report
"There is nothing so good for the inside of a man as the outside of a horse."- Winston Churchill

Congratulations on such fine trophies. The kudu is half horse - judging by the size!
I really like your gemsbok too. The tsessebe is sure a strange looking animal though.

Some wonderful trophies and a fine sounding hunt! Congratulations to the hunters and PH for a job well done!
Thanks for sharing!
Africa on my mind.

Kudu is a stud—please tell me u taped him. Cheers

nice trophies all around! Awesome kudu!! sounds like a great hunt, Congratulations!
V

jacques smith said:
Kudu is a stud—please tell me u taped him. Cheers
Click to expand...

Thanks, no unfortuntely we didnt tape him

Some beautiful animals taken there. Thanks for sharing!
People talking without speaking
You must log in or register to reply here.