davetexas said:
Darn. I've been keeping my feet on in front of the other. Guess I need to retrain myself.
Click to expand...

Do it, then come back here and post the results. I haven't seen anyone yet who made the change that didn't shoot a better group.
HUNTERS make importation bans work!

Maybe some one here can help me out. I was at the range on the weekend practicing with a new set of sticks and all of a sudden it seems my shooting has gone all to hell. I am glad I did a search and found this thread. I have used sticks in South Africa on 2 safari's and 22 critters with only having to track 2 which I figure is pretty good and have practiced off sticks for 5 yrs. I am now scheduled for buff in August so have been doing lots of shooting. Last week at 75 to 100 yds I could hold to sub 1" group. So now comes the problem this past weekend after buying new sticks I started out shooting low so I got on the bench and shot a 1/2" 3 shot group. Then back on the sticks and I was lucky to hit a 6" plate. After a box of 375 I was lucky to put 4 shots inside 8". What the hell! NOW I AM SECOND GUESSING EVERYTHING. I guess I need to start from scratch and hopefully all your hints will come in handy as I retrain myself.
Any help would be appreciated.
Thanks

Are the new sticks different than the old in any significant way?

Is the rifle or your hand resting in a different position?

Is it possible your hold or cheek weld is different or uncomfortable causing slight movement?

Maybe dry fire from both positions and have someone watch closely for discrepancies. Or record yourself.

Although unlikely if groups tighten up on the bench but I would check all mounts for a loose screw.

One other possibility, when getting a bit frustrated I have a tendency to get a bit "rammy" for lack of a better word. This has an effect on damn near everything I touch until a cooler mind can prevail.
Last edited: Jul 12, 2017
Silence, Speed, Violence of Action.

Abeln said:
Are the new sticks different than the old in any significant way?
Click to expand...

My old ones were cheap crap and were coming apart and the telescoping legs would no longer tighten up.

Abeln said:
Is the rifle or your hand resting in a different position?
Click to expand...

The design is definitely different so I do hold the firearm differently into the saddle.
First thing I checked was the scope mounts, everything seems tight.
I will pay closer attention to how I mount the rifle and how I am holding on to it compared to my other sticks.
Thanks for the input.

No problem. I'd be interested to know what you find to be the issue.
Silence, Speed, Violence of Action.

Abeln said:
No problem. I'd be interested to know what you find to be the issue.
Click to expand...

I managed to figure out my problem took another box of ammo though. Here is my last four shots at 100 yds, 2 standing and 2 sitting. 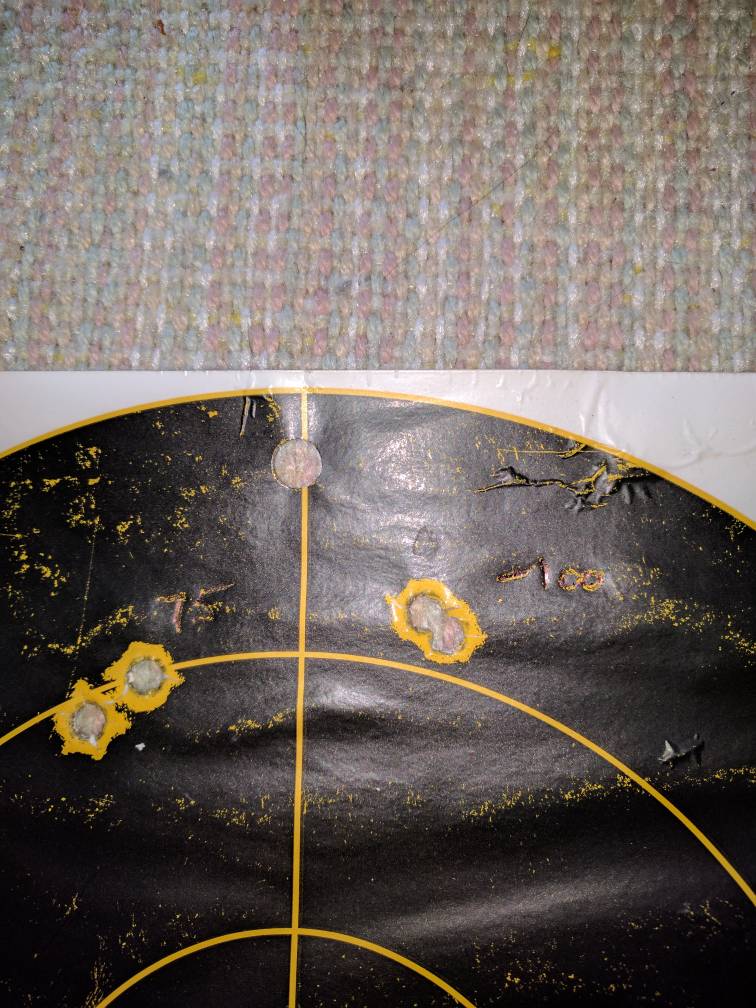 I found that the problem was the way I was holding the forend into the rest was way different for the two sets of sticks. Once I adapted my stance and hold things settled down for me. Thanks for the advice.

Good to see the group tighten up. What has helped me through the years during practice is to slow down and make damn sure I have the same, or as close to the same as possible, cheek weld on the rifle along with the same forend hold in every shooting position. Although potentially uncomfortable at first, after much deliberate practice muscle memory will take over during stressful situations and clean shots will be second nature.

Works for me anyway.
Silence, Speed, Violence of Action.

Here's what I do on sticks.
Check out our free full-length hunting videos here https://www.youtube.com/channel/UCryK-TVoxC2Q5oglxBiRP0g

Like a lot of people here I hunted my entire life, really since about age 10, not using anything but "rests" or positions available in the field. From prone to sitting to kneeling to off hand plus limbs, rocks, trees, brush, whatever. It wasn't until an older adult and Africa that I started using classic Africa sticks to shoot from. At first, on first safari, just couldn't hold steady enough with a 4x scope image dancing all over. So much so that even holding on the vitals of an impala sized animal at 100 yards was too iffy. On that trip I used a slimy wet termite mound in a thorn bush for buffalo- worked perfectly, just like a large tundra tussock in Alaska But after much practice, practice & practice holding and dry firing during that first safari, I figured out how to shoot off sticks.

Before my second Africa trip no more trouble with sticks. I learned the secret, for me anyway. Set sticks at proper height (for me), relax in the stance, let gravity hold rifle on sticks, squeeze, fire. Still not quite as steady as prone or over some solid rest but still quite good... capable of 100% in the vitals hold on impala out to about 225 yards. Sitting behind spread out, low sticks even better at 100% in vitals on impala-sized animal out to about 265 yards.

Shooting sticks take way more practice to become proficient with than most people want to admit. We shoot gophers all spring and summer off them out to 250 yards. It makes African game seem easy after that...haha.
Check out our free full-length hunting videos here https://www.youtube.com/channel/UCryK-TVoxC2Q5oglxBiRP0g

Shooting "gophers" would be a real trick since the semi blind buggers spend 99% their time underground. But I do know someone who will, armed with a pellet gun, sit very close to an active gopher hole and wait til they poke their nose out- which they do once in a while But prairie dogs... now there's a good opportunity for enhancing skills!
Last edited: Jul 18, 2017

No prairie dogs up here...just Richardson's ground squirrels...we call 'em gophers but for the taxonomists in the crowd...you are correct!
Check out our free full-length hunting videos here https://www.youtube.com/channel/UCryK-TVoxC2Q5oglxBiRP0g

sheephunterab said:
Here's what I do on sticks.
Click to expand...

I like the point you make about resting the rifle stock far out on the sticks. I've always done that, but never really thought about it.

Just like proper placement of feet it's one more way to increase stability and every little bit helps.
HUNTERS make importation bans work!

sheephunterab said:
No prairie dogs up here...just Richardson's ground squirrels...we call 'em gophers but for the taxonomists in the crowd...you are correct!
Click to expand...

Figured you were probably talking about Richardson's GS. What the hey... American pronghorn is called a goat or antelope. But then again they are neither, while an eland is a true antelope and an ibex is a goat. There is a reason for using correct terms- and I'm not a taxonomist. Try discussing pikas or civets at the coffee shop sometime- whew!!

fourfive8 said:
Figured you were probably talking about Richardson's GS. What the hey... American pronghorn is called a goat or antelope. But then again they are neither, while an eland is a true antelope and an ibex is a goat. There is a reason for using correct terms- and I'm not a taxonomist. Try discussing pikas or civets at the coffee shop sometime- whew!!
Click to expand...

We call pronghorn, antelope here too...guess we are just heathens up here in Canada but we all seem to know what were are talking about. The government even calls them antelope in the hunting regulations. Pika we call pika though. Some people still call sharptails, prairie chickens but most people don't pay them much mind. Colombian ground squirrels on the other hand seem to confuse some people.
Last edited: Jul 19, 2017
Check out our free full-length hunting videos here https://www.youtube.com/channel/UCryK-TVoxC2Q5oglxBiRP0g

Just the added pressure from my first hunt, which i don't regret any of the details at all so is in no way a jab to my PH

I use mine with one leg forward & rest the forend on the leather tops of the sticks. Three other suggestions before the hunt:
1. Practice
2. Practice under stress
3. Practice setting them up quickly
(I'd also practice a bit more...)
Former owner, Renaissance Firearms

reading up on all these comments and advice to practice shooting from sticks, I'm starting to get worried. I only ever once in my life shot from sticks. A very quick setup, aim and fire in just a few seconds, successfully on a deer in Scotland. So went quite well all things considered. But then again it was only about a 60-70m shot.

But when I read these recommendations of 100's of rounds of practice from shooting sticks... I'm supposed to leave in 3 weeks for the first time to S-A, haven't practiced this one bit. And with all shooting ranges in my country being closed since the last 5 months and probably in the coming months too, I do not see how I could have practiced this...

I'll see if I can get some wood poles from a shop in the neighborhood and practice with dry fire. But I'll not be able to practice for real.

Any recommendations on what else I could do to practice, apart from actually shooting?

V.
You must log in or register to reply here.