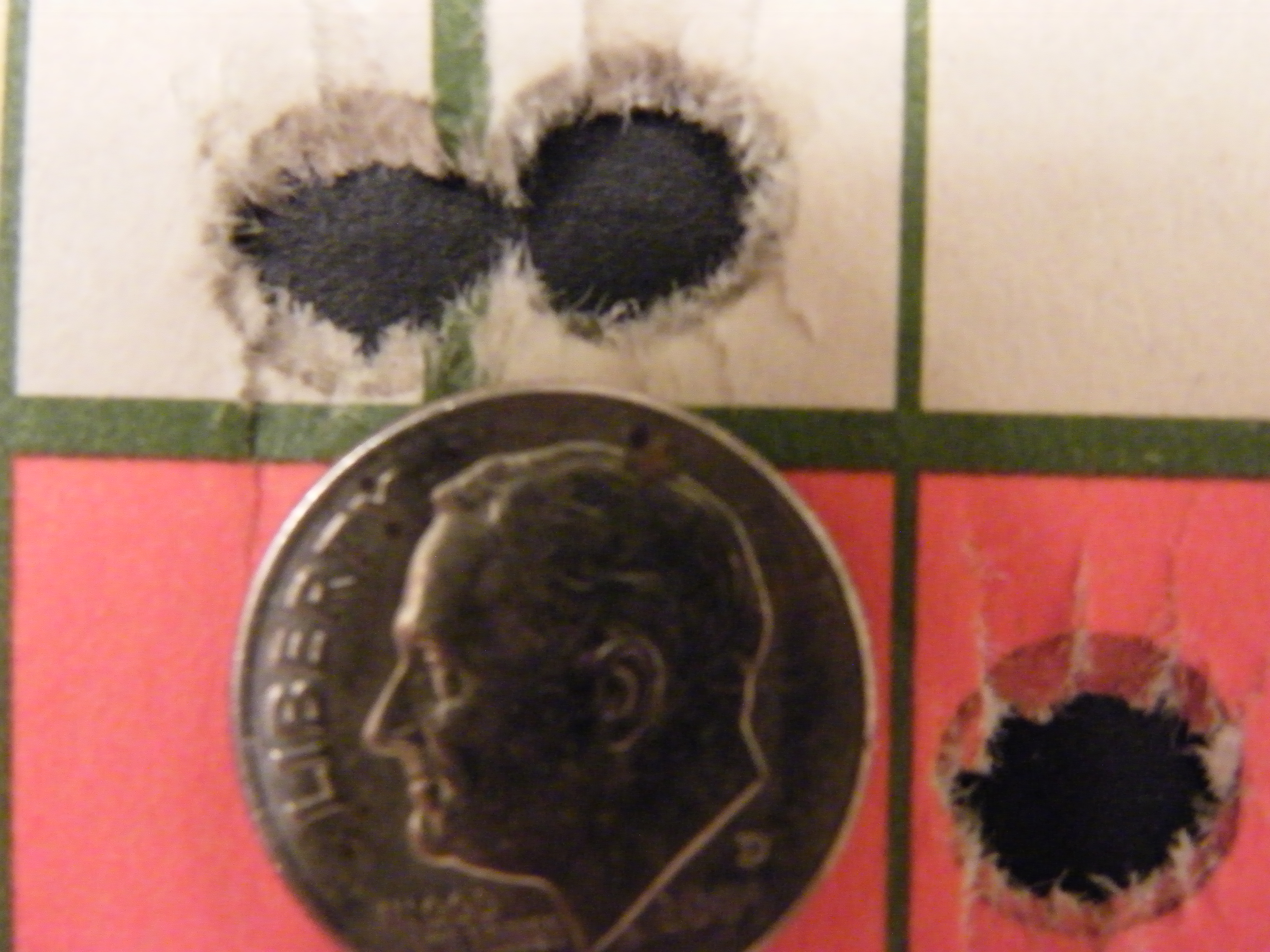 Some of you might have read an earlier post about my concern of Remington Safari Premium 300gr Swift A Frame accuracy in my Winchester 375 H&H. Well the range report is no worries for me. I think my gun likes it.
The lower right hole is first shot, then scope corrected one click up and one click left and fired two more which split vertical line on target. Last two touches is center target and three inches high where I want it for a two hundred yard zero. You guys out there tell me what you think. I'm a rookie with a 375H&H. Scope was leupold VX6 1-6x 24 set on 6 power at 101 yards measured with Leica rangefinder.
Last edited by a moderator: Sep 14, 2015

I just returned and we took quite a few animals with Swift Scirroco..Very accurate and all recovered bullets looked like the ads..First time using but won't be my last...All retained at least 80%...

I've used the factory loaded Swift A-Frame from Remington, but can't seem to find them lately. Did the Remington-Swift alliance end? Is Federal now producing factory ammo with the A-Frame?


David Petzal, the well-known and longtime writer in Field and Stream Magazine seems to like Swift A-Frame and Scrirocco bullets too.
http://www.fieldandstream.com/node/1005010717

This is an excerpt from the Field & Stream article:

A-FRAME
Introduced in 1984 by Kansan Lee Reid, the A-Frame resembles a Nosler Partition but utilizes pure-lead cores and a hardened pure-copper jacket. Most important, the front core is bonded to the jacket, so that unlike the Partition, the A-Frame does not blow out its front end. Instead, it "rivets," expanding, but not by much. (A .30-caliber A-Frame, upon striking something solid, will flatten out to about .45 caliber.) The A-Frame also retains its weight—usually 90 percent plus, no matter the velocity, the range, or what it hits.

How strong is the A-Frame? Last summer in South Africa I shot a bull eland (the largest of all antelope, scaling at three-quarters of a ton) with a 300-grain .375 A-Frame. My bullet hit the shoulder, broke it, went through a lung, the heart, and the liver, and ended up in the stomach. That eland was knocked sideways by the impact (one of the very, very few times I have seen a big animal so moved) and died within a few seconds. The bullet had traveled 4 feet through some of the heaviest hide, bone, and muscle in the animal kingdom and retained 92 percent of its weight. That is what A-Frames do.

THE UPSHOT STRONG POINTS: If there is a tougher expanding bullet than this, I don't know what the hell it is. Does not expand much but goes through anything short of an M-1 tank. Also spoils very little meat. WEAK POINTS: Unless you really need all that penetration, it's better to save your money. USE IT ON: Whatever is big, thick-skinned, heavy-boned, and nasty. FACTORY LOADED BY: Remington


SCIROCCO
In 1999, Swift introduced the Scirocco, a highly streamlined, boattailed, plastic-tipped bullet. Swift said that it offered superior penetration, and Swift was not kidding. The first time I shot Sciroccos at the Ballistic Buffalo, I thought that they would be easy to stop, but the BB couldn't hold any of them. I had to go get a lot more newspaper and plywood, and it was a pleasure to do so. The Scirocco gets its strength from a very heavy jacket (see the cutaway photo above) and a bonded core; it expands but does not come apart. It is also very accurate.

THE UPSHOT STRONG POINTS: One of the very best all-around designs. Since the Scirocco is both very strong and very streamlined, it excels for long-range work at magnum velocities. WEAK POINTS: I haven't found any. USE IT ON: Anything your heart desires. FACTORY LOADED BY: Remington

LOL - you know there isn't anything wrong with that! I'd say you have a winner for sure. No need to search further, unless you just want to.
HUNTERS make importation bans work!

Yea Royal I'm done with searching. This will do.

Heym88 with such sucky groups you should just send me the rifle and look for a more accurate one I have had great luck with A-frames in 9.3 and 458. You should be dialed for anything that crosses your path.

Now to get my 470 regulated. When I called Butch, he wasn't in best of shape with his back and couldn't remember what he regulated my Searcy 470 in. It's an early BL series gun, so my uneducated guess would have been federals with woodleighs. That's where I will start anyway. I don't think Hornady was doing their DGS and DGX at that time.

Love both Swift bullets..You can order loaded from Swift in Kansas which is where Igot mine,,
You must log in or register to reply here.

What Calibre to Bring on a One-Gun Safari?
2 3