Nosler Ballistic Silver Tips, anyone use these on a regular basis?? 308w etc

Hi All, how you all doing?

Look forward to your thoughts??

I use ballistic tip 180 grain in 308 win and 30-06, but...
But I use this exclusively at home, for hunting roe deer, which grows up to 60 pounds. It si light, small and soft animal. This bullet gives fast expansion and shok. Roe bucks mostly drop on spot.

However, it is not, or rather I would not recommend ballistic tip, for magnum velocities, nor for tougher game.
Faster velocities of 8x68, may cause ballistic tip too fast expansion, rapid fragmentation, less or insufficient penetration on tougher game, such as for example large red deer or old large male boar.
Then it make superficial wound, not reachin vitals, and this should be avoided.

For 8x68, I suggest to try to chose from, premium line of bullets: 1) partition bullet (nosler partition, or rws h-mantel), 2) monolitic bullet such as TSX, or 3) bonded bullet, such as norma oryx.
Those bullets are designed to keep toghether,with minimal fragmentation, and generally are designed for magnum velocities.
Those bullets cost more, but they are made with specific technology, to prevent fragmenting, and cost more in production. But they are made for higher impact velocities and tougher animals.

Used a similar bullet in 7mm mag a few years ago in factory ammo. Bullets were light and fast..... Had more trouble with clean kills than any other ammo I've used. IF you have to use them, at least go heavy for caliber and slow them down! In .300 WM at least 200gr, if not 220gr
“I never knew of a Morning in Africa when I woke up and was not happy.”
— Ernest Hemingway

I used 165gr factory winchester ballistic silver tips in 308win to shoot a zebra, an oryx, a kudu, a springbok and 3 warthogs last summer and was very happy with the performance.

I have used the 140gr in 7MM Rem Mag and 7MM WSM for whitetail, mule deer and pronghorn with excellent results. One shot kills in their tracks and one of the shots on the pronghorn was far from well placed. Have never recovered a bullet all pass through from close range to 300yds+
M

What would John Nosler say?
For the failure of soft expanding bullet (comparable to ballistic tip, in magnum such as 8x68), he invented partition bullet.
Below is a story from his autobiography, a story of how premium bullets started... 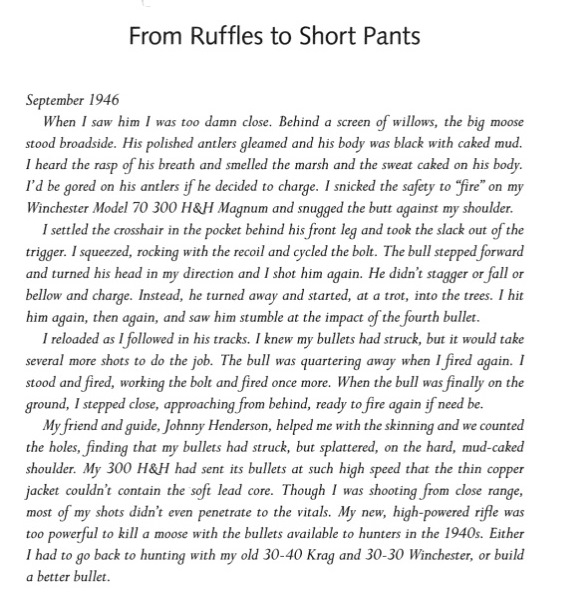 Hi Novice Huntress,
I agree with mark-hunter, 180 gr in your .308 will probably work well for most light to medium game. Not so sure about performance in the 8x68? I would definitely avoid heavy bone. These bullets are not really designed for breaking heavy bones.
I have shot several animals with ballistic silvertips in 7mm and while they expand rapidly and make for quick kills when placed in the heart/lung area, they shed too much weight quickly to give deep penetration on heavier game.
Here’s a link to the Bullet Performance Database here on AH. Scroll down a little on page 2 and you will see reports from Bighorn Sheep and Whitetail shot with 7mm 140 gr ballistic silvertip. Notice the retained weight. Hope this helps.
https://www.africahunting.com/threads/bullet-performance-database.37971/page-2

To answer the OP, I use 168grs Nosler Ballistic Silver Tips in my .308win to shoot deer in the UK.

I routinely shoot deer which range from muntjac to red deer and the bullets have always behaved as expected.

Do basic research and use common sense about bullet construction. Even bullets that are marketed as "Bonded" may be nothing more than cheap-to-make, thin jacketed conventional cup and core bonded bullets that do only marginally better than most other similarly constructed cheap-to-make non-bonded bullets. Use a tough (er) bullet not a soft (er) bullet for hunting big game. Pick two or three bullets in the "tough (er)" category and see which one your rifle likes. Use that bullet. Then the only excuse (responsibility) remaining is shot judgement and bullet placement.

Tough(er) bullets that come to mind are Swift A Frame, TSX/TTSX, TBBC to name three. There are others. Unfortunately availability is sometimes an issue with any bullet.
H

It really depends on your chosen quarry and impact velocity. I use the 95gr C/T ballistic tips in my .243 on light bodied game (springbok, blesbok, impala etc) typically at distances between 150 and 300m (at which point they have slowed down a bit) and they work very well indeed.

Hi All, a really big thank you to you all for your replies.

Good to hear people have had positive performance with the CT BALISTIC SILVER TIP. Yes I fully understand matching game weight to appropriate bullet weight and obviously some of the more expensive premium bullets do perform really well.

The 8x68s we used the Peregrine VR4 180g does a great job, do have some partitions to test, IdaRam thank you for that link, some good reading there.

Please all, keep your feedback coming in.

swift aframes hold together.
they also expand well on lighter game, as well as retaining weight on tough game.
they are good for raking shots through bone, and side on shots through the ribs on game from light to heavy.
few others combine these attributes in one package.
bruce.
D

I have had several BAD experiences with 180gr Balistic Silver Tips in .300win

What I saw was failure to penetrate the shoulder of a 200+lbs whitetail buck at 80yds; bullets exploded on the shoulder blade and sent hair flying in an awe inspiring cloud - as the wounded buck ran off with ZERO blood trail. I watched this in horror through 10x50 Swaros while my cousin was the shooter.

That evening my cousin shot a 300+lbs bore with the same ammo, he hit the bore at 75yds broad side and the same thing happened..... explosion of hair and hide with no real damage and boar was not recovered.

The following evening my cousin shot a 240 lbs 8pnt buck at 80yds - This buck dropped dead as it was shot in the face just below the left eye..... NO EXIT WOUND!

Just the entrance wound under the left eye.
You must log in or register to reply here.

What Calibre to Bring on a One-Gun Safari?

Wednesday at 6:20 PM
Bert the Turtle
B