Does this happen to you? You read a hunt report on AH and you say to yourself, "I've got to do that hunt!" Well, this is exactly how this hunt came about. About two years ago, I read a hunt report from @Bhfs300 (https://www.africahunting.com/threads/new-zealand-red-stag-hunt-with-kiwi-wilderness-safaris.37106/) and after a few PMs and reading a few other New Zealand hunt reports from others here on AH (@gillettehunter , @cpr0312 & @firehuntfish ), I booked a hunt.

While flying to NZ (United from Houston, Sydney then Christchurch), I watched "First Man", the recent movie about Neil Armstrong. Actual film footage of JFK's famous speech, "We choose to go to moon" speech resonated with me, especially as I was laboring up steep mountains slopes in the Southern Alps. 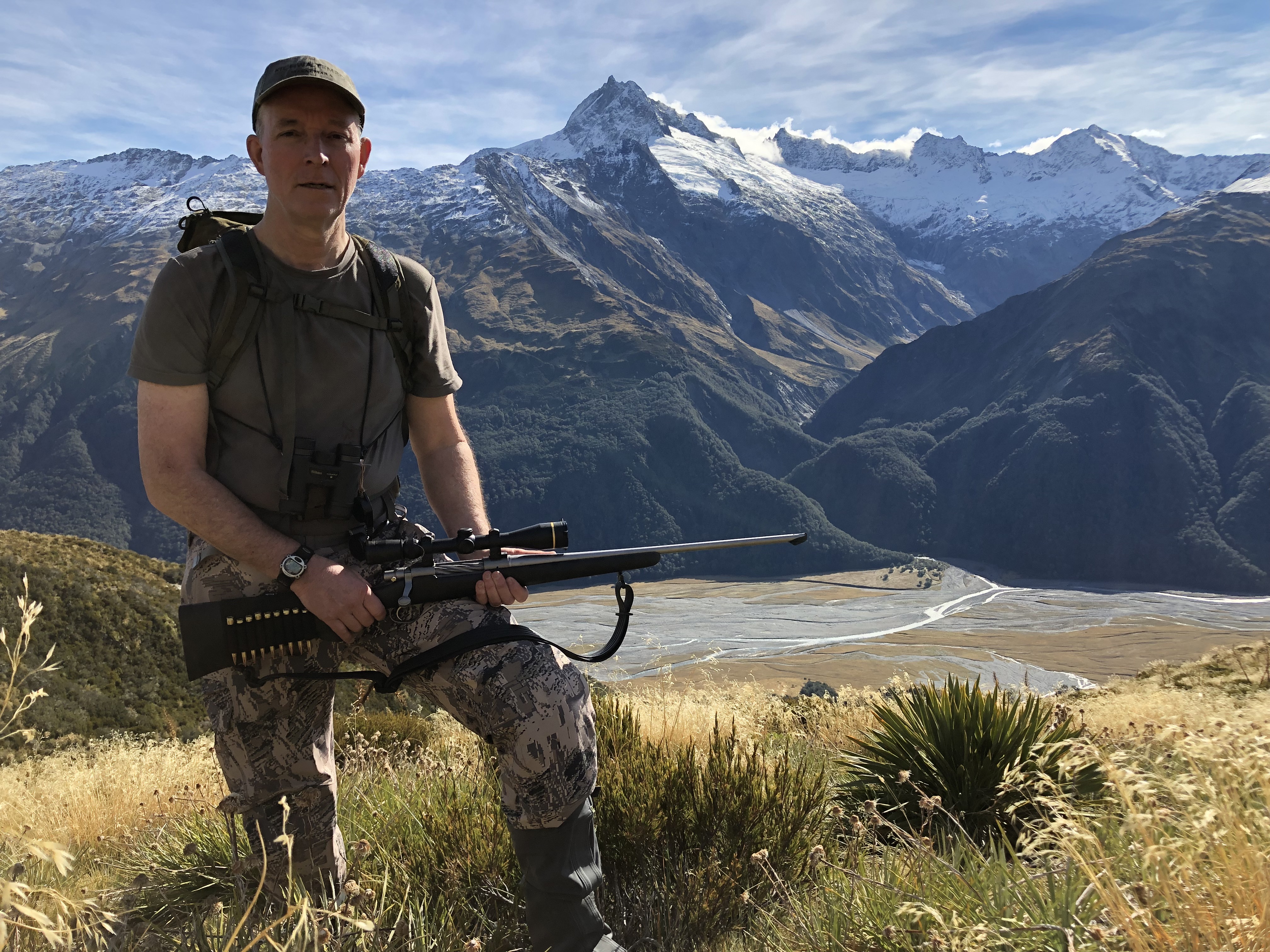 I departed Houston the night of April 17th. Once again I was unimpressed with United's poor check in service with a firearm. The United counter in Terminal C was not busy and it still took about 30 minutes to check in. Amazingly, I was told that TSA doesn't have anyone in Terminal C to check a rifle case, so a United agent had to carry my rifle case and key over to Terminal B and then bring it back for me to complete the check in process. The 17 hour flight from Houston to Sydney on the 787 Dreamliner was good, but very long. I was able to get a business class ticket for 280,000 miles.

Kiwi Wilderness Safaris is owned and operated by Peter Chamberlain. With a simple $500 deposit, I booked the hunt about a year ago. Peter was always quick to reply to the multiple emails I sent him. When I arrived in Christchurch the afternoon of Apr 19 (Good Friday), one of Peter's sons, Leighton, picked me up at the airport. Peter lives about an hour north of Christchurch, in the small town of Waikari. From there, the Red Stag hunting cabin was a short 20-30 minute drive.

Saturday was Day 1 of a 7 day hunt. I shot my rifle to see that it was still good and off we went. Both Saturday and Easter Sunday were wet, rainy days. Leighton was serving as my main hunting guide and Peter was assisting. Peter had ankle surgery a few months ago and was walking around in a walking boot. He still managed to run circles around me, with his boundless energy. Peter is also a talkative, entertaining guy. The area we were hunting was low fenced, cattle and sheep farms. We saw several stags, fallow deer and chamois on Saturday, but no shooters.

Sunday morning was pouring down rain, so we weren't in a big hurry to get out early. By mid-afternoon, the rain lighten up, but the clouds were still low. Peter was going to drive to one mountain top and Leighton and I would go to another. As soon as we got to our designated spot, we got out and did a little hiking in the light rain and clouds. Visibility was only a couple hundred yards on the mountain top, but as we moved down slope and out of the clouds, visibility improved. We could hear a stag in a nearby stand of trees give out an occasional roar. We sat there for about a half hour, but the stag never walked out and presented itself. Leighton and I continued to move slowly down slope and got a radio call from Peter. Peter had spotted a good stag, lower in the valley. Leighton and I hiked at a brisker pace, which was still mainly down slope and easy going. We covered about half a mile, quickly and easily. We used the rolling terrain for cover and was able to move to within about 120 yards of the impressive stag. I sat down on the side slope and used Leighton's bi-pod shooting sticks. I had brought to NZ, my titanium Remington 700 in 270. I was shooting 130 gr. Hornady SST bullets. The first shot put the stag down where it stood. It was squirming on the ground and attempting to get up, so a second shot put it down for good.

I was extremely pleased with this 16 point (10 on left and 6 on right), free range Red Stag. 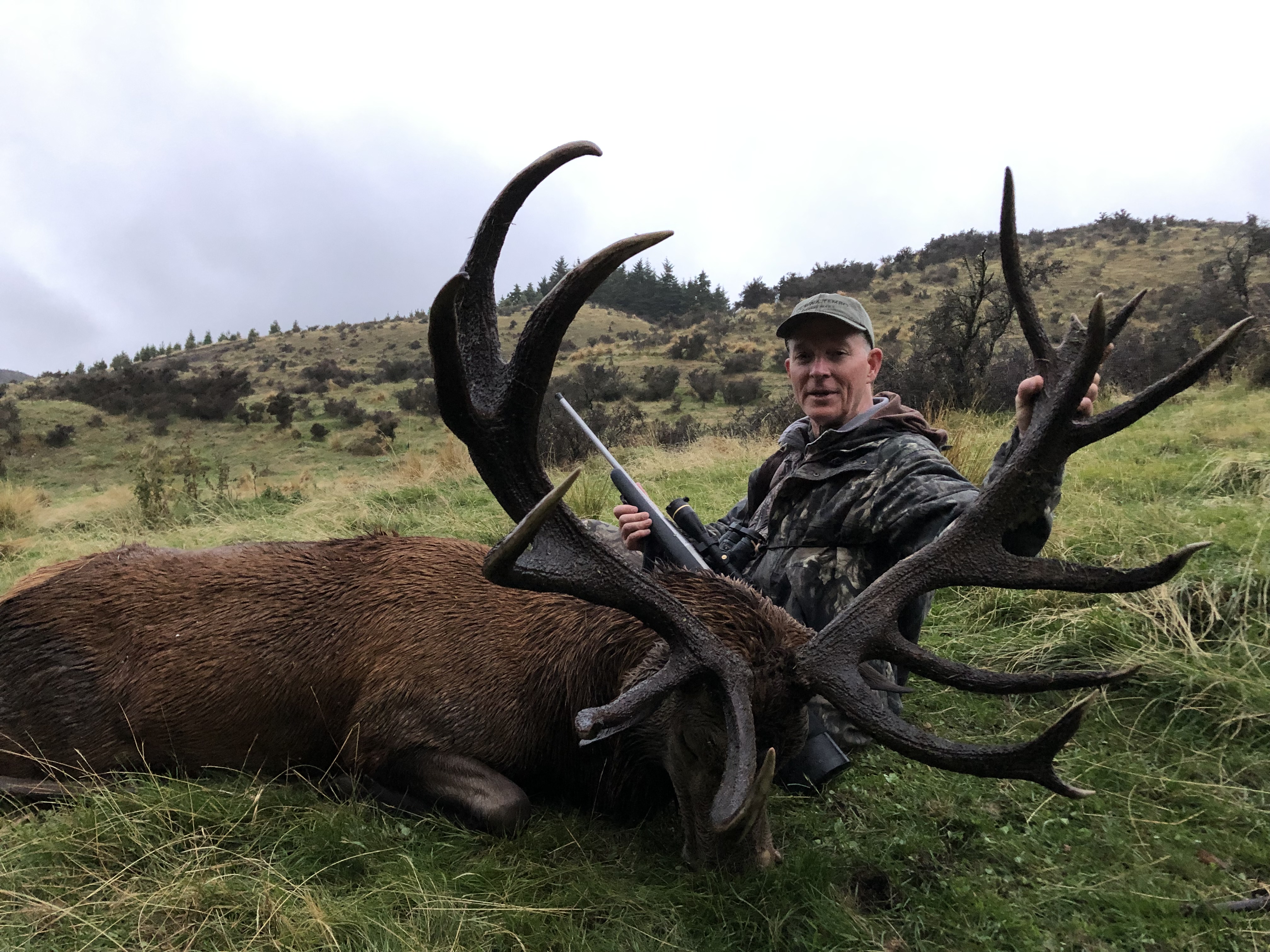 Great to get one on the ground and not have to get concerned about the hunt great mass we both got one in the rain.
Can’t wait for the rest of the report!!
Tom

Good to hear that you made it out with Peter. He's a good guy and some of the best prices for hunt/animal quality in NZ. That is a lovely stag. Nice mass and the tine length is very good. A fine trophy. Congrats
Bruce

That is a great free range Red Stag. I hope mine (from Argentina in 2020) is anywhere near as good.

Awesome!!! That is a beautiful stag!!! Congratulations!

Well that's a heck of a way to start a hunt!

Awesome. Looking forward to the rest. I’ve passed emails with Peter before. Interested in seeing some more on him for sure.

Fantastic stag! You did well in that weather.

Sorry for the delay in finishing this report, it's been a hectic week back at work.

We hunted tahr from Tuesday thru Thursday and did not get one. The travel time ate into the actual hunt time and I didn't factor that in. If I do this hunt again, I will dedicate the entire week to tahr, since I was able to score with the nice red stag. The tahr portion of the hunt pushed me to my physical limit. After breakfast, we started the climb and stayed at it for 5 hours. Even though the temps were in the high 30s and low 40s, I peeled off the cloths and was down to a t-shirt during the climb. I took everything out of my pack, except the bare essentials. I left the extra box of ammo in the cabin and just had the 4 round in the rifle and the 9 rounds on my cartridge holder on the rifle stock. While climbing, I started to have thoughts that I brought too much clothing (rain jacket, wool sweater, Sitka lightweight jacket) but once on top, it was quite cool and I ended up wearing it all. During the climb, we crossed a small stream a few time and was able to refill our water bottles. I sucked down quite a bit of water. My soon to be 60 year old knees are still aching a week after the hunt. However, the allure of a tahr will likely draw me back to the south island of New Zealand and another hunt with Peter and Leighton. 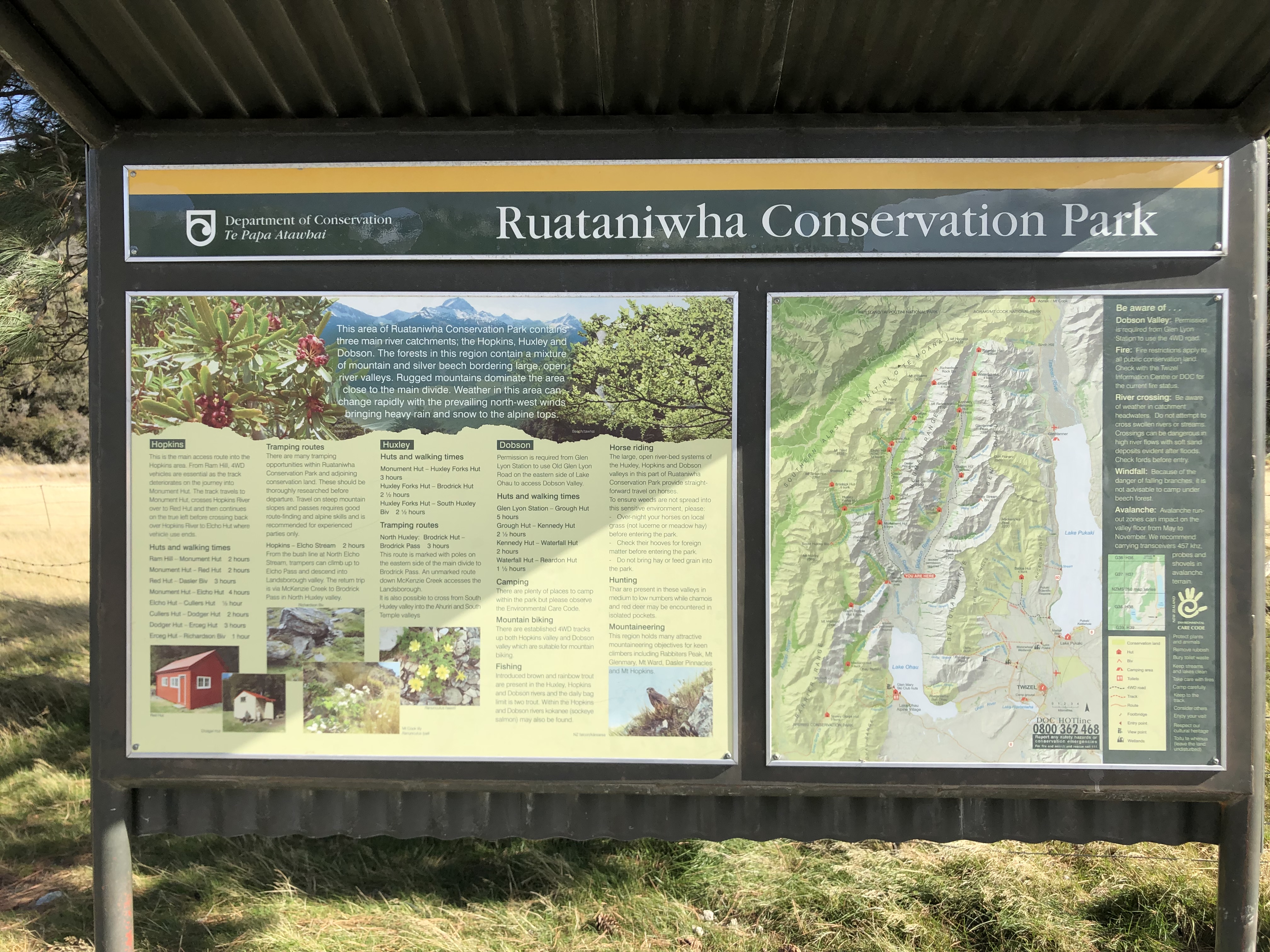 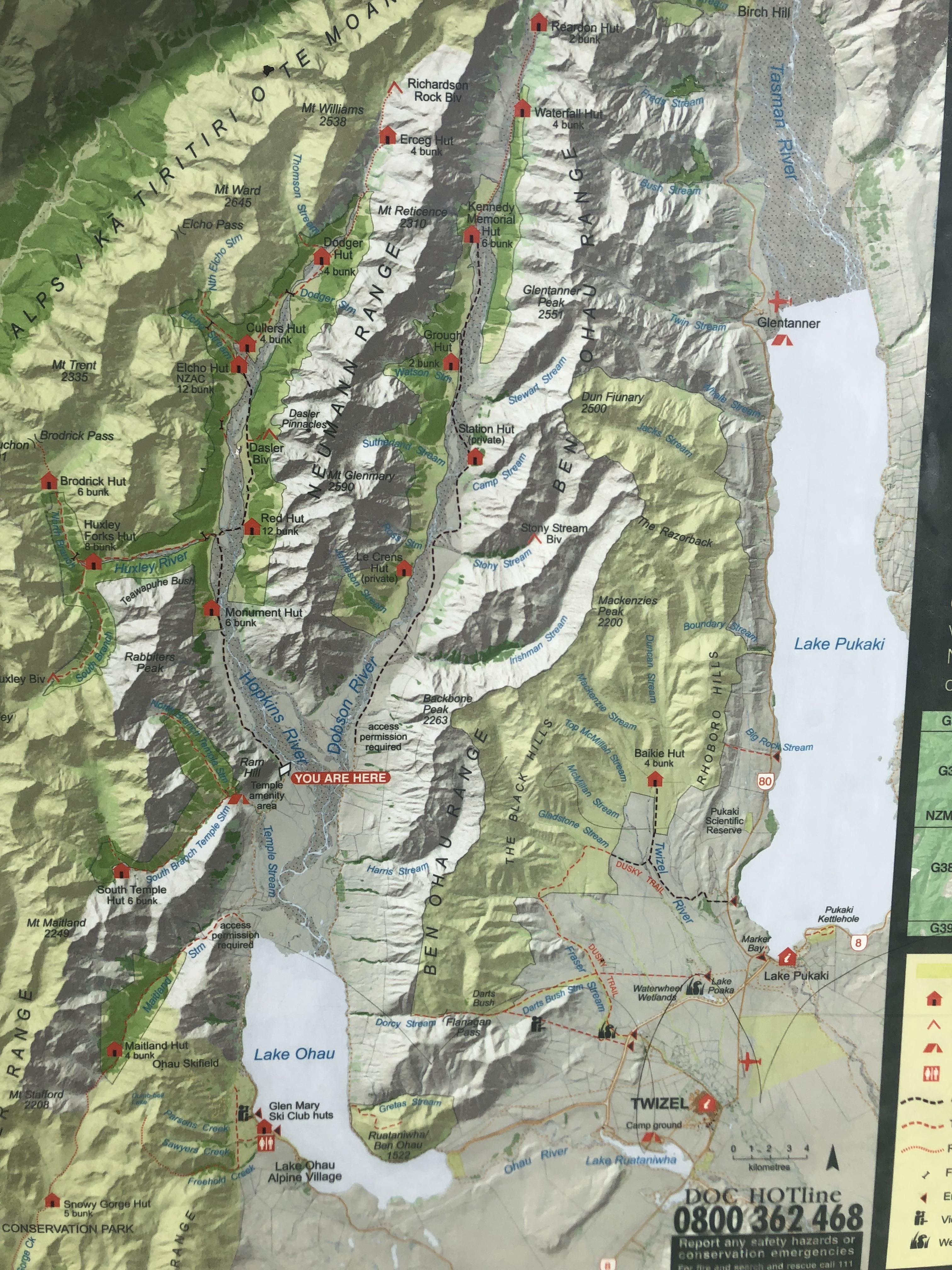 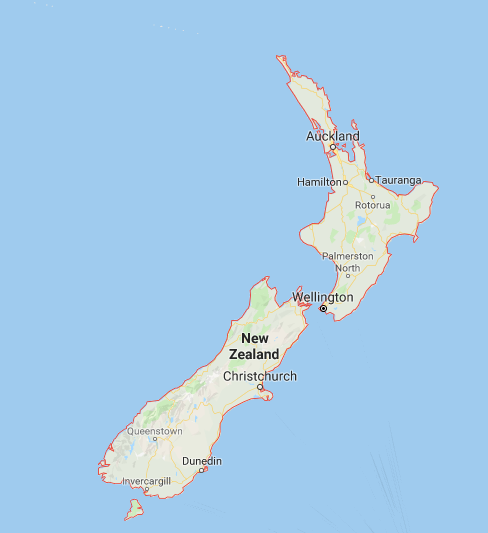 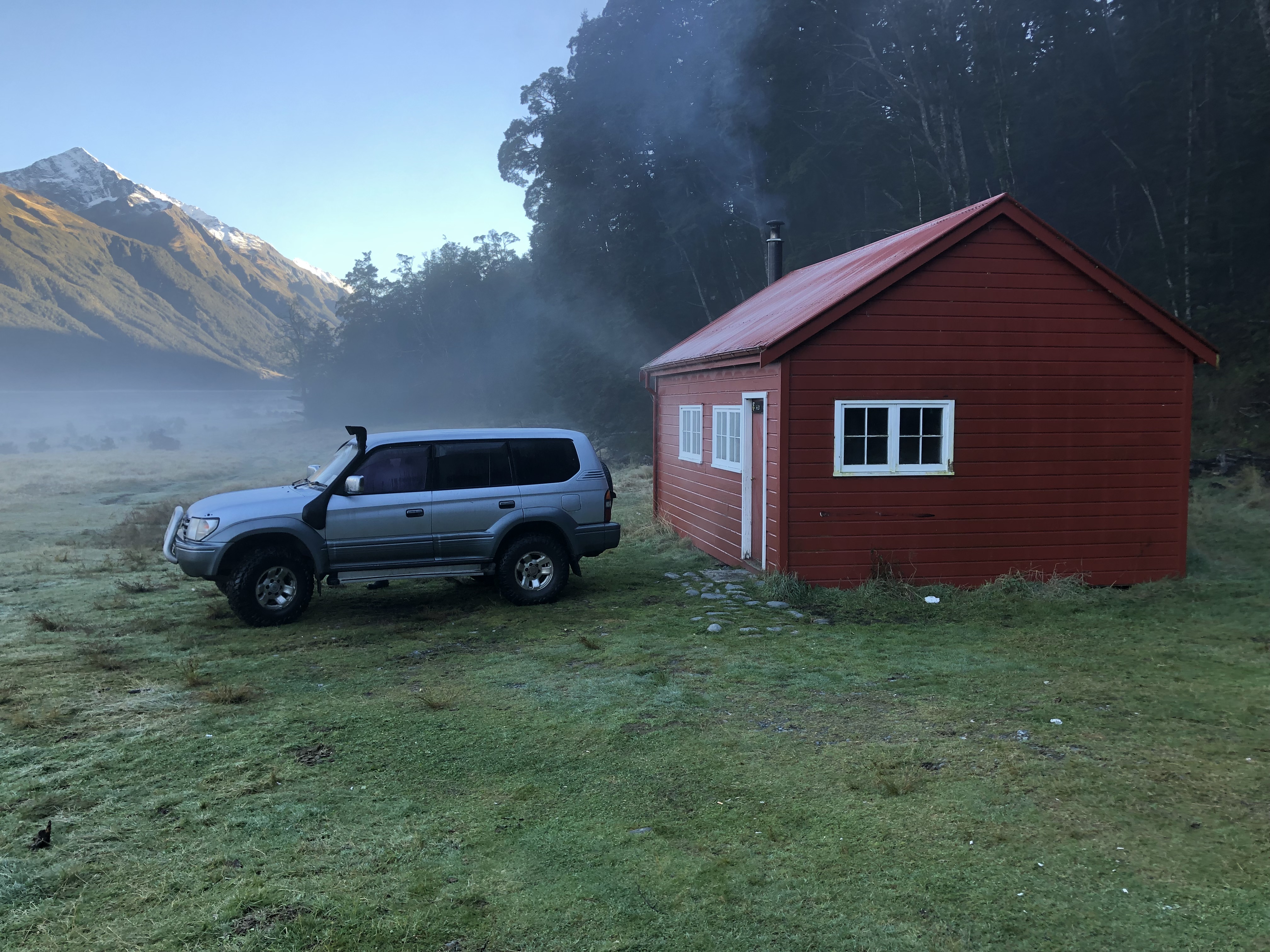 This is the Red Hut. We spent Monday night at this hut, before driving a couple hours further up the valley on Tuesday. 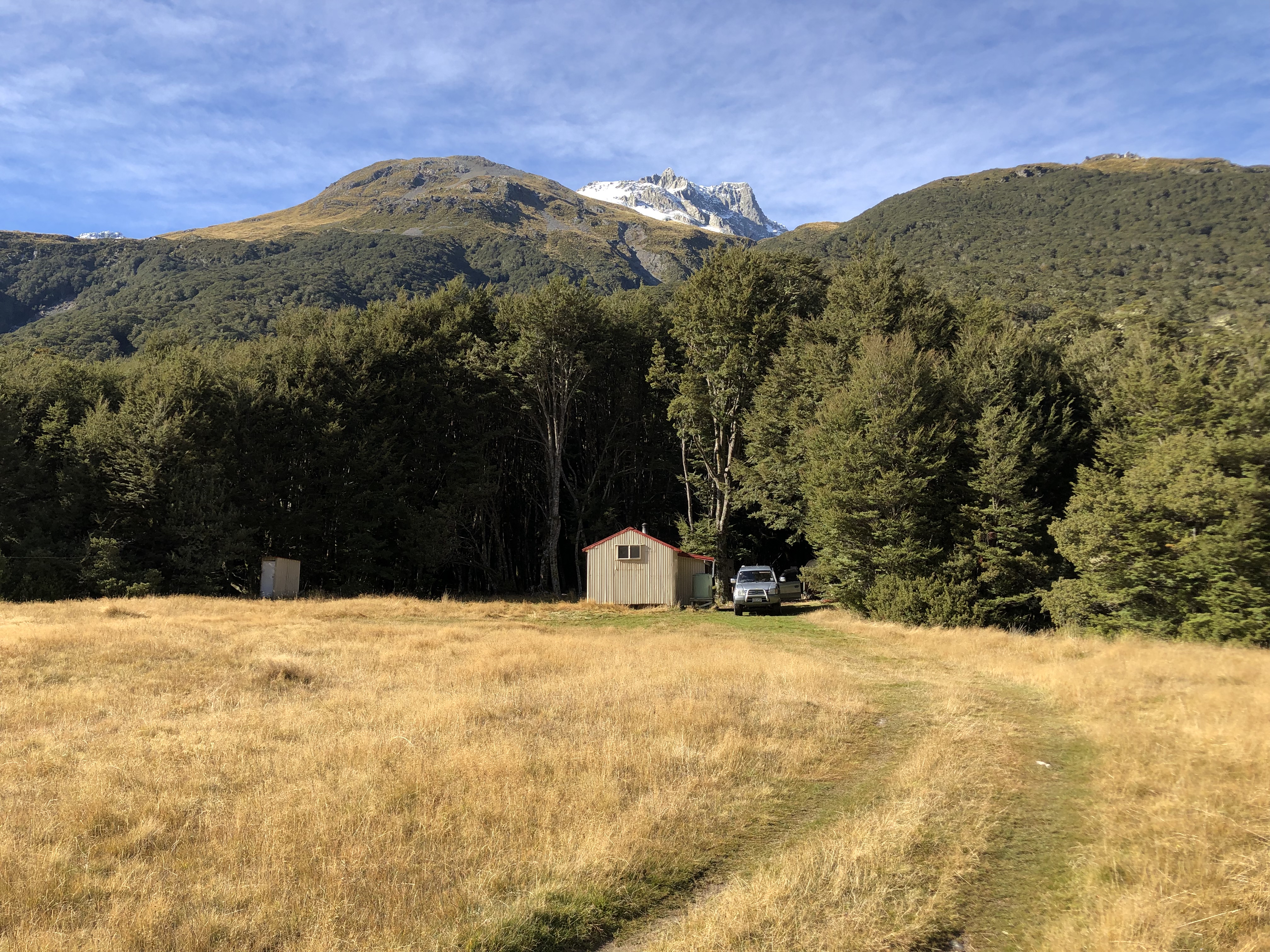 View of Dodger Hut, our camp for the tahr hunt. The snow covered peak is where we climbed to each day. 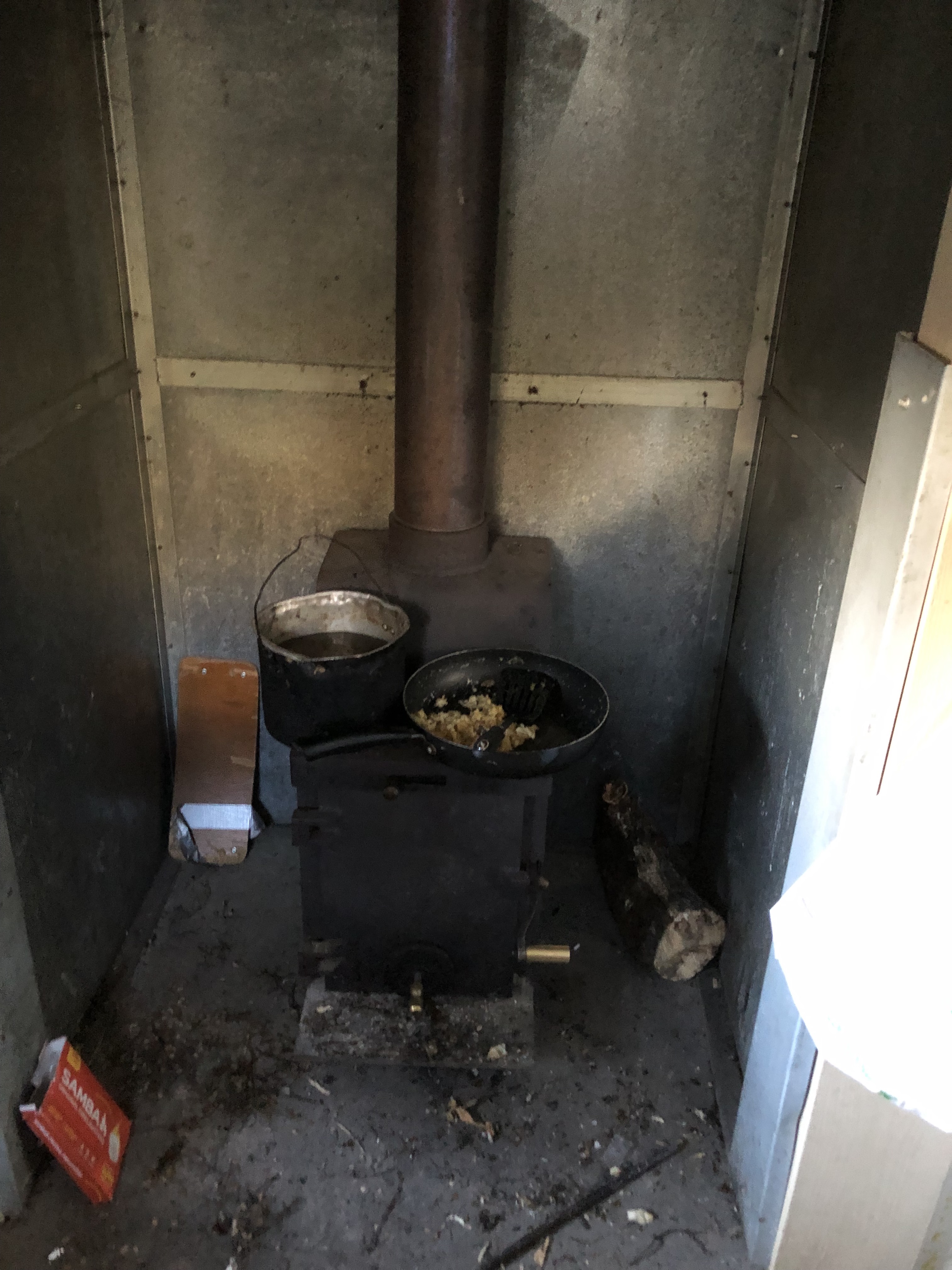 The wood burning stove kept the cabin plenty warm and a good place to heat water. 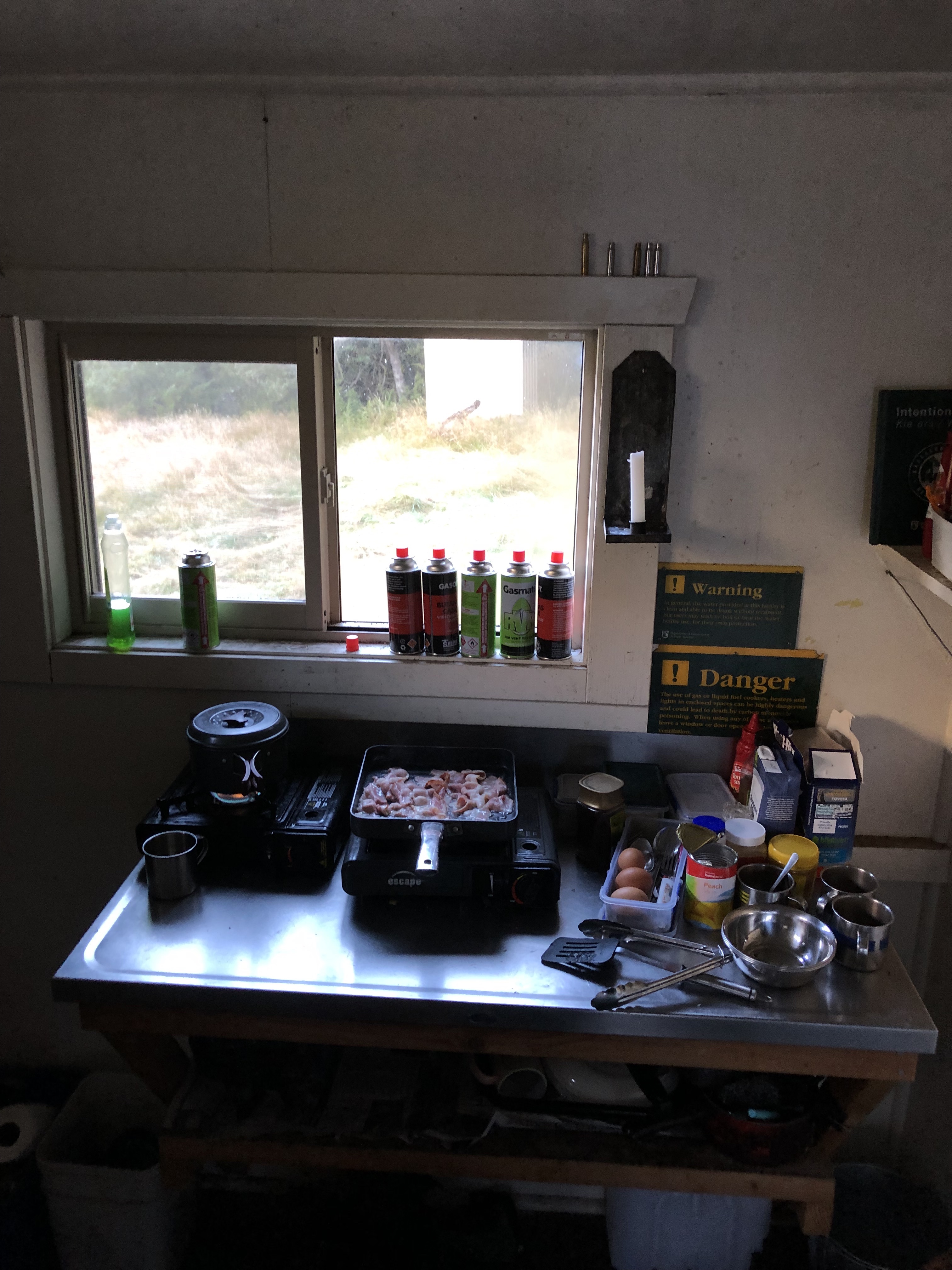 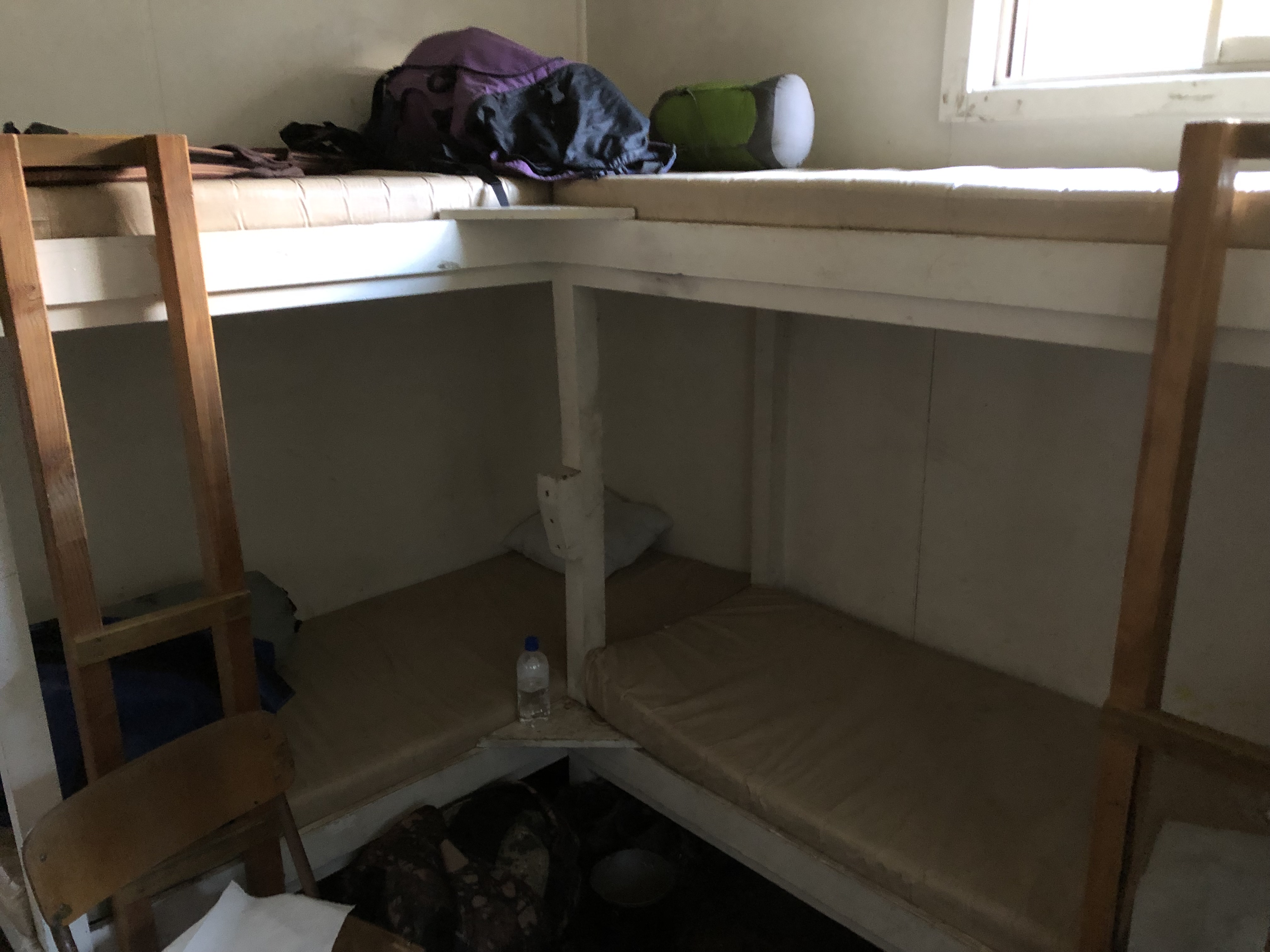 Bunks for 4 in the cabin 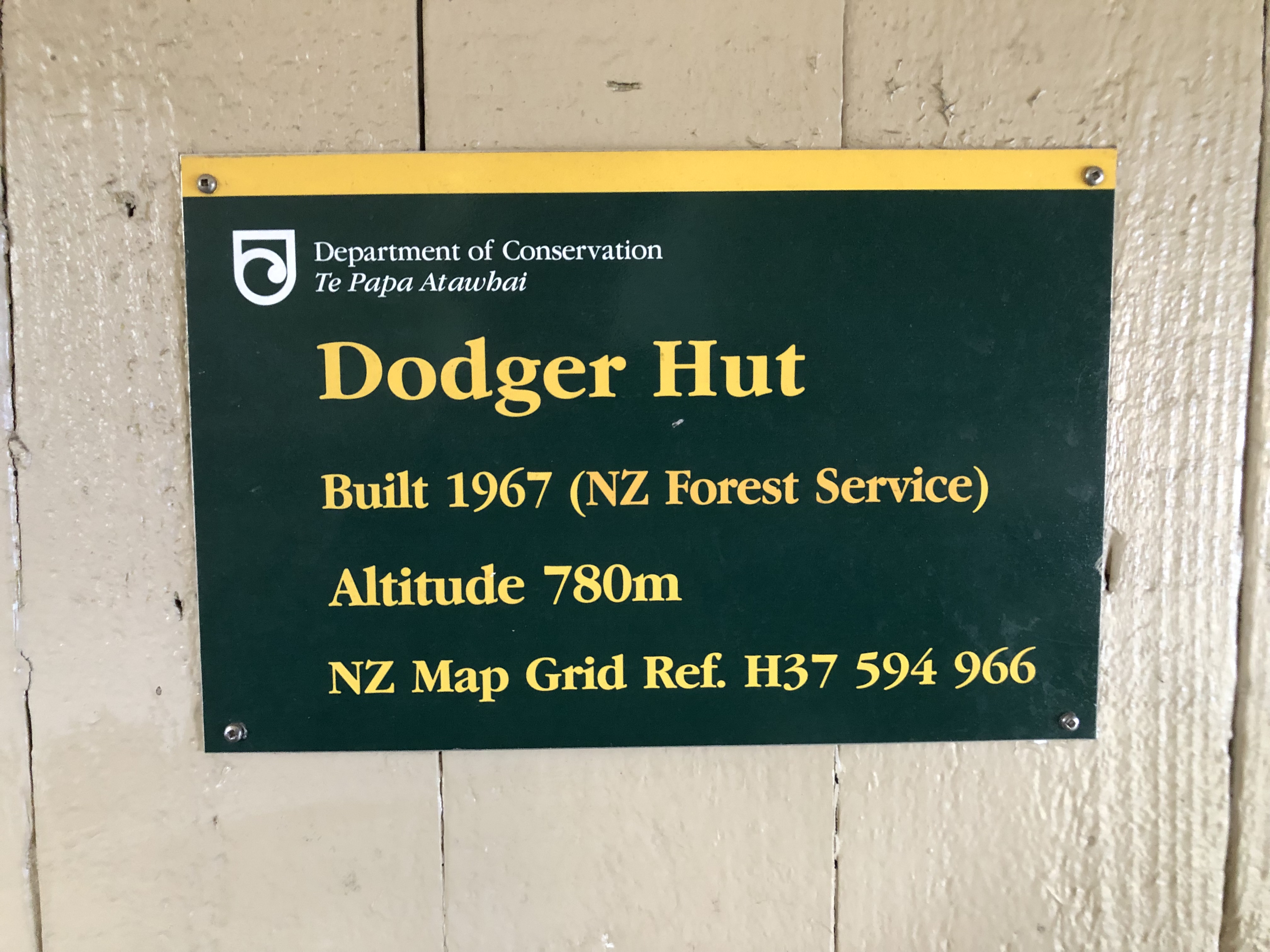 Dodger Hut was our home for the Tahr hunt. The cabins are quite comfortable. We climbed to a spot of about 1800-2000 m elevations and most of the peaks were 2200 m. A Kiwi walk in the park! 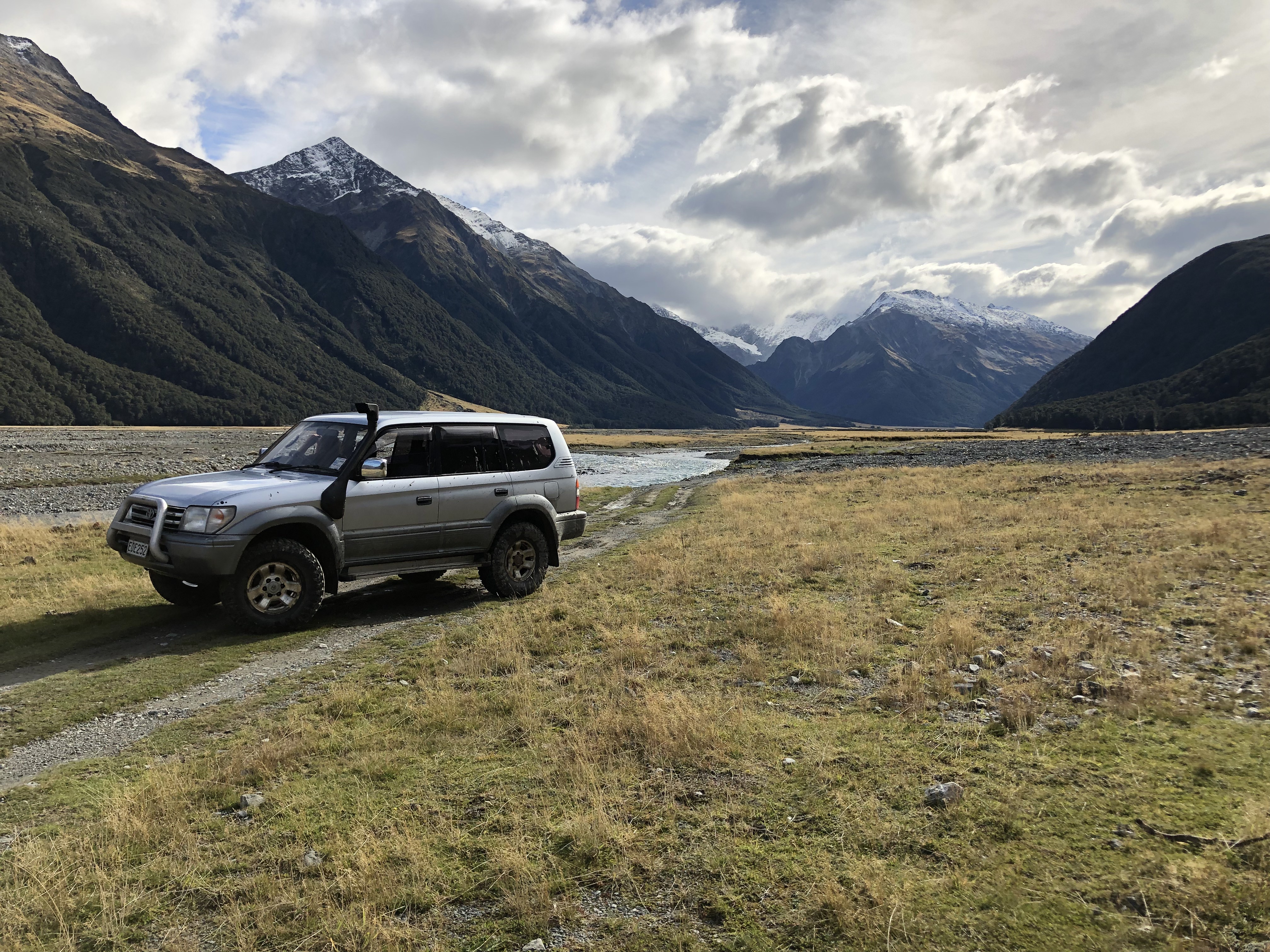 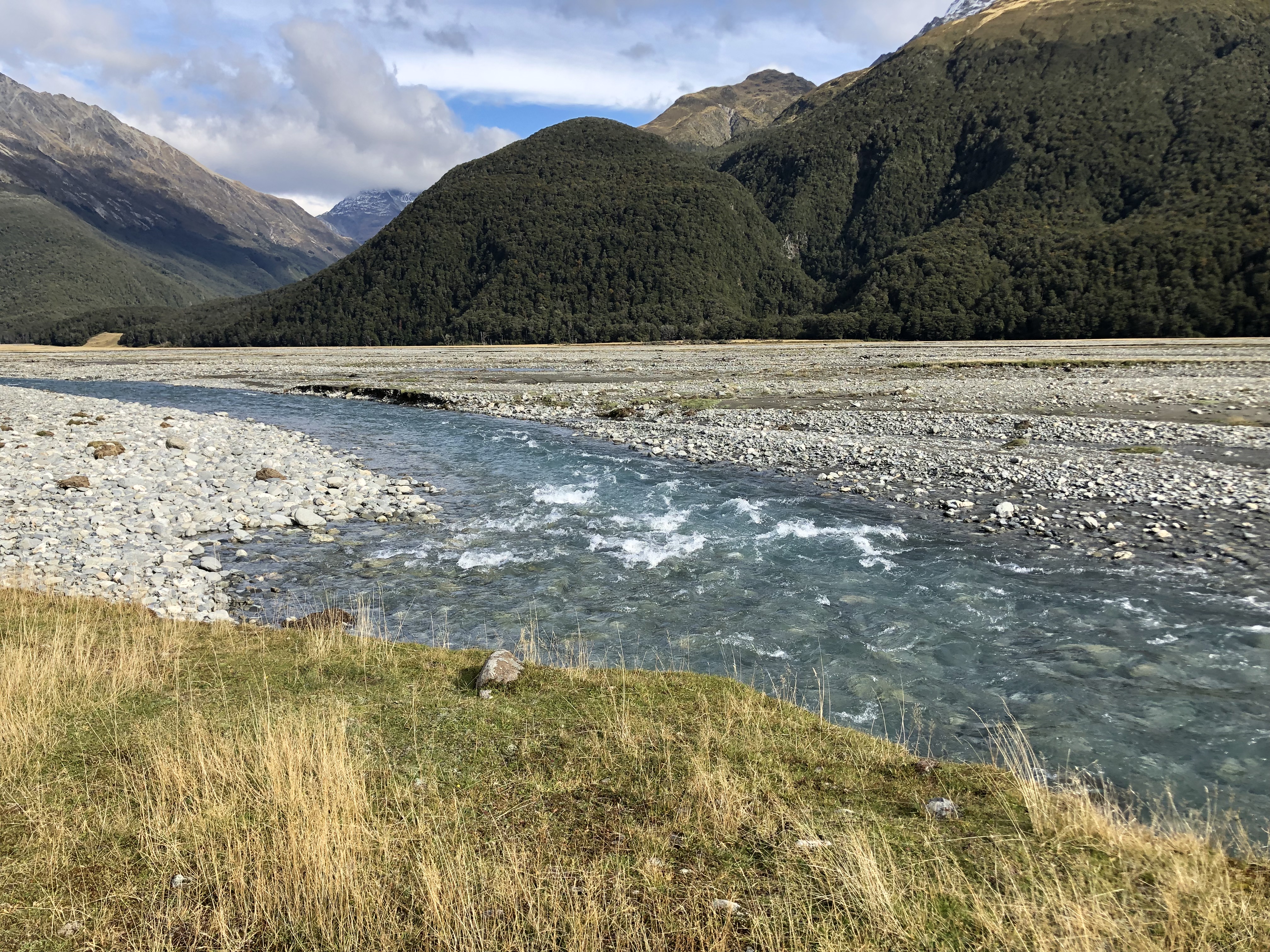 We made numerous crossings of the braided stream, the Hopkins River, in the Toyota. An interesting adventure each time! 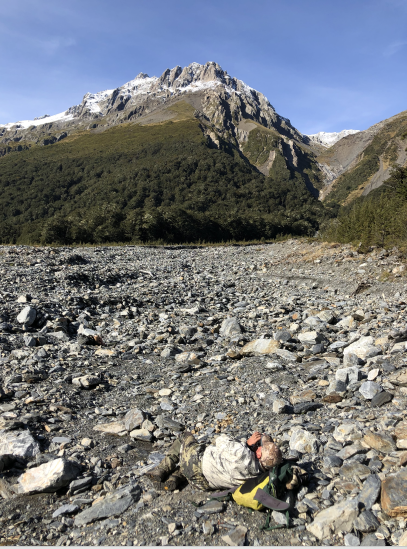 Peter and Leighton glassing for tahr. Leighton is pretty hard to see in this photo. 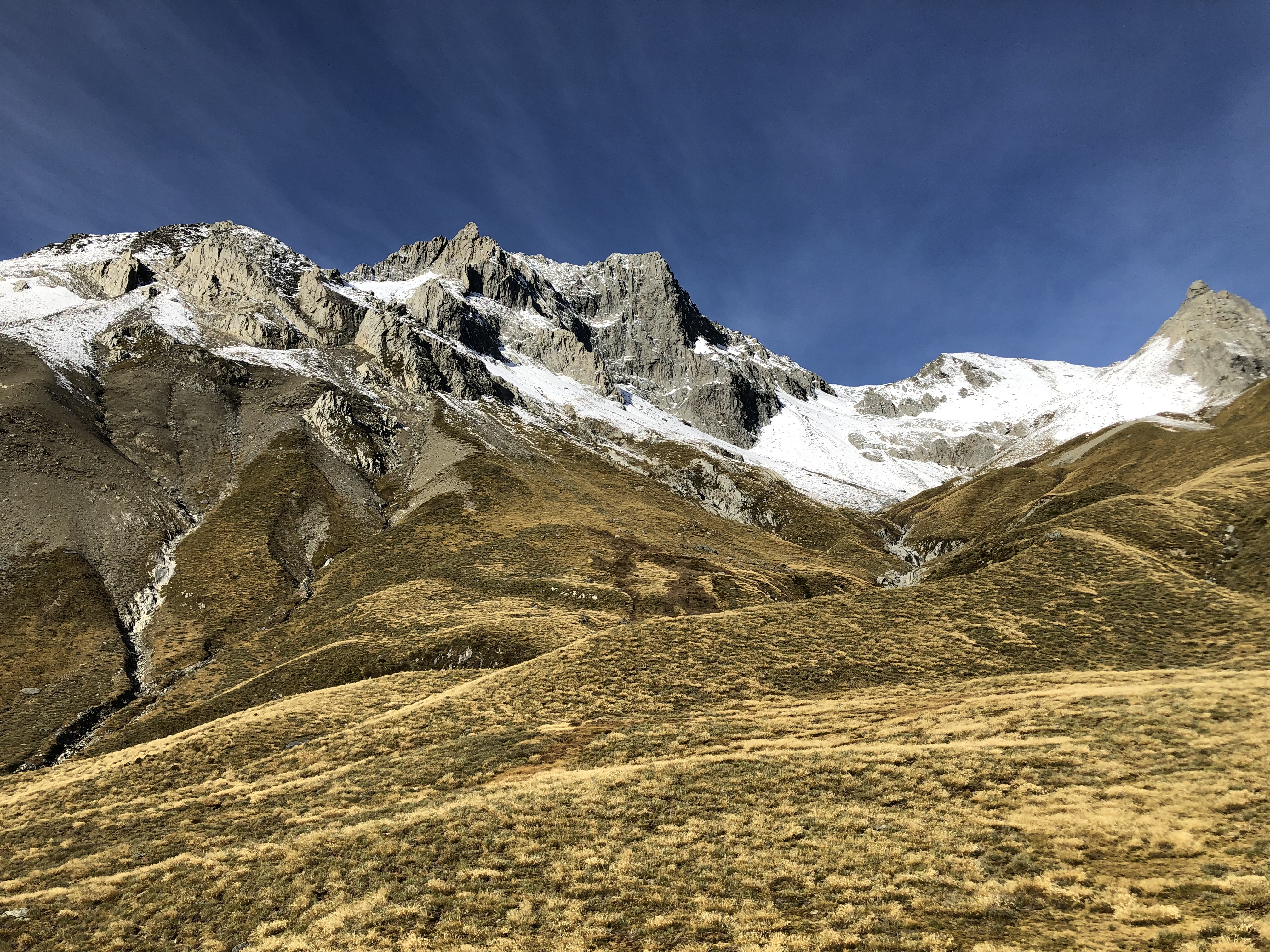 This is the view that Leighton and I had from our glassing spot near to top. Lots of open terrain and saw numerous nannies and a few young bulls, but no shooters. 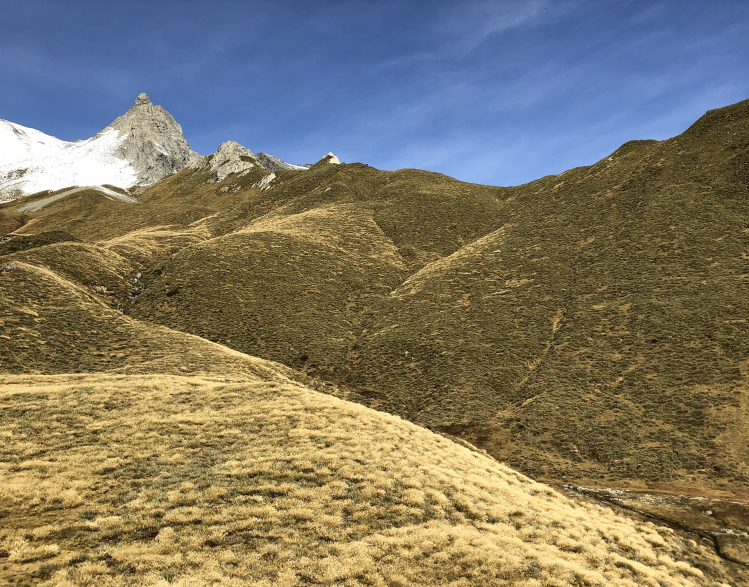 We saw several tahr, nannies and young bulls, playing along the ridge line.

Leighton glassing.
Last edited by a moderator: May 4, 2019

Congrats, that is a great stag !

The scenery is really beautiful.

Von Gruff said:
Trophies are always nice as in that beaut red stag but the hunt is the memory that abides. A shame we couldn't catch up but maybe next time you are here.
Click to expand...

Garry, had I known we'd be hunting south of Christchurch, I would have definitely tried to arrange a meeting. Just another reason for me to make a plan for a return trip in a few years.

Thank you. The Red Stag hunt was a great spot and stalk hunt and relatively easy from a physical requirement. The tahr hunt, on the other hand, was about as hard of hunt as I've ever done. Got to bring your A game for sure on a free range tahr hunt.

Pity you didn't get a bull, but the scenery is half the trophy. You hunted them properly though.

Gain all that elevation and then waste it!! Damn Kiwi is crazy.
Next time tell him you'll bring a Bivi sac or single man tent and stay up there.

You certainly had an adventure.

Congratulations on the stag. My condolences on having to fly United for that long of flight. Surprised you did not take the Air New Zealand direct from IAH.

I’m exhausted just looking at the pictures! Beautiful country! Hope I can return before I’m too old to truly enjoy it!
Africa on my mind.
You must log in or register to reply here.