The buffalo is the one on the left.

Its all where you hit them. A heart shot buff is a heart shot buff regardless what you hit them with. Most heart shot animals run a distance. Now buff do tend to stay on their feet longer when wounded no question. The late Charles Askins relates a tale of a buff that took 11 rounds from a .460 Weatherby which I dont think too many people would question the adequacy of for buff hunting. Another late great PH and writer Finn Aagaard felt the .375 perfectly good for buff and carried one for backup for years. My second buff fell to one well placed (if not lucky) shot from my .375 at over 140 yards. Neck/shoulder shot. No followup needed. Many have said the .375 is not adequate for buff but it all depends on ones personal experience. 4 of my 6 PH's have carried a .375 or less for backup.

It is all about personal experiences... my 4th buffalo and my personal best (both in body size and bosses) just run 15-20m with a heart shot....

I rather shooting those things with something big!
By the way... I never use 404 jeffery and its a caliber I always wanted to shoot.

Here is a picture of the buffalo mention

Thats a fine looking buff! Huge tight bosses. I like the .404 and the way it shoots in my CZ Safari Classic but have not hunted with it yet. Hope to someday. It shoots very well and recoil is not bad at all with my preferred load that drives a 400 gr bullet to about 2250 fps.

Alcornoque, Could'nt the same thing happen with a 458 or 470 or even a 600? Although I have never hunted Cape Buff, I have done a lot of reading and watching (some of the reading done on this forum). Each animal seems to be unique, one might fall to a single shot from a 375, but, then some run and run being shot 11-12 time with the combination of rifles in different calibers.

It can happen perfectly... but thos beast can be dangerous. I guess it is all about confidence. I rather using the bigest caliber I can use propertly.
The beauty of this is we have a lot to chose from.

I order a 470NE, I will have it ready in a few month. I hope I can use next seasson.

sestoppelman said:
Thats a fine looking buff! Huge tight bosses. I like the .404 and the way it shoots in my CZ Safari Classic but have not hunted with it yet. Hope to someday. It shoots very well and recoil is not bad at all with my preferred load that drives a 400 gr bullet to about 2250 fps.
Click to expand...

This is such a grat gun. I belive you are going toi enjoy it a lot in Africa.
I heard the Norma PH with woodleight bullets both soft and solids are the best option for the 404 jeffery.

Thanks for that. If and when I take it for buff in the future, the best shooting soft nose so far has been the Barnes Triple Shock and groups with 72 grs of IMR 4064 run right at one inch at 100 yards. Havent fooled much with the solids yet but would likely go with the Hornady DGS solid if it shot well. The Barnes banded solid shoots well in my gun but has feed trouble. It hangs up on the way into the chamber(that big flat nose). If it was the only solid that my gun liked I would spend the money to make it feed but it isnt so I will use something else as I am not stuck on the BBS.


SkipJ said:
After many years of fantasizing about double guns, I finally have the resources to buy a moderately priced one. Originally I was looking at a Sabatti in 9.3x74 but I've seen where .50 percent love them and .50% say they are junk. I am about to pull the trigger on buying a Merkel 140-2 in .375 H&H and just wanted to know people's thoughts on that particular rifle. I don't want anything bigger than .375 because although I'll be using it in Africa, it will get the most use hunting NA big game. Thanks
Click to expand...

Skip welcome to the wacky world of double rifles! As is evident from the responses you have gotten so far, the double rifle is one of the most misunderstood rifles in the world!

First off, a double rifle that will likely be used for hunting or at least defending its owner against dangerous animals should NEVER be chambered for a rimless or Belted rimless high-pressure cartridge!

H&H knew this back in the early days of the 375H&H belted/rimless cartridge back in 1912, and developed the 375 H&H Flanged magnum for use in double rifles! The pressures were slightly lower than the rimless version, and had a flange (RIM) so it worked far better in a double rifle. Most double rifle makers will chamber a double rifle to the rimless cartridges, but they will warn you it is not the best choice, if the rifle will be used for dangerous game hunting. The belted/rimless 375H&H was designed for bolt-action rifles, and the flanged version for double rifles.

Though the rimless 375 H&H is a fine cartridge, and in up to handling any animal that walks the Earth today, it light for the biggest, and meanest, and a little large for the smallest of game, it is a very good all around cartridge for the world, in proper rifles, and using proper bullets, placed properly as well. It is just not well suited to double rifle use!

The 9.3X74R double rifle is capable of handling Cape buffalo, but is not legal in all countries for that purpose! The 9.3X74R, and 9.3X62 Mauser along with both 375 H&H rounds are NOT big bore cartridges but are medium rounds! Big bore, today, starts at .400 cal. so are considered, by most countries, as minimum for Buffalo up of the big five! All three of those cartridges are legal in most jurisdictions for the Leopard, and lion! The 375 H&H are legal for all five in most places.

I think what you will get the most use with it the 9.3X74R side by side double rifle, for use mostly in the North American hunting fields, and a 375H&H bolt rifle! They can both be taken to Africa, and in several countries the 9.3X74R is a legal back up for the scoped bolt rifle! In Zimbabwe the 9.3 is legal for all the big five, and being a double rifle is better than the 375 bolt rifle in a tight spot where two quick AIMED shots are needed!

I see a couple of the posters have warned you against the Merkel double rifles! Don't you believe that for one moment! The off the shelf Merkel double rifles are working rifles, not fancy, but are as dependable and as accurate as any double rifle you can buy, regardless of price! Buffalo do not look at engraving or pretty wood! What impresses them is the rifle sticking a big bullet in their brain, spin, or hart/lung area EVERY TIME THE TRIGGER IS PULLED!

I have owned just about every name double rifle you can think of, and my two travel doubles today are a pair of Merkel double rifles! One is a 140-2 SAFARI 470NE, and a 140E-1 double chambered for 9.3X74R. Both are totally replaceable if lost or damaged, and both as reliable as sunrise! I've had both for over ten years and have had zero issue with either of them!

There are several good double rifles and all have their good and bad points, there are only two I really discourage you from buying. The Blaser S-2, and the Sabatti. The Blaser S-2 is fitted with an auto de-cocking device that makes it dangerous when confornting a charging dangerous animal where more than two shots are required in close quarters. The Sabatti is simply junk IMO, and not worth the cheap price it sells for! They used some very poor practices when building those rifles.
DUGABOY1
DRSS Charter member
"If I die today I have had a life well spent, for I have been to see the elephant, and smelled the smoke of Africa" qt by Me 1982 (mac)
S

Thanks for the advice. I seem to be getting the idea that the .375 is not the preferred caliber for a double so I am going to hold off purchasing this one until since I am primarily going after plains game and a cz550 in .375 will do the job just fine and I can buy a .470 double later when I have the money to go after the big 5. Thanks for all your assistance.
B

hi bebo have to disagree with you on the 9.3x74r and 9.3x62 statement you made. the 9.3x62 dates from 1905 and the 9.3x74r from same period maybe slightly older but not much in it. power/velocity wise with a lot of factory loads there isnt much in it either, the x62 having a small advantage but nothing you can tell when using them. handloading the 9.3x62 will from what i have read on here up the velocity and power, but i am more than happy with the factory loads i use in both of these calibres. in the past they were both used a lot more extensively in africa than now, and both have taken all the animals there including elephant. they are definitely capable of doing the same things with the same bullet weight. i only use the 293grn bullets or 286grn if thats what i can get , i agree that with the lighter 250grn bullets the x62 would have more reach but i shoot mostly less than 200yards so i dont bother using them. they are my 2 favourite calibres and i use them more than any others, and have never noticed any difference on a variety of animal sizes including buffalo.
Some hunting reports for Takeri Reserve Zambia posted by members of AfricaHunting.com:
- https://www.africahunting.com/threads/zambia-zambian-adventure-takeri-game-reserve.24291/
- https://www.africahunting.com/threads/zambia-hunting-report-takeri-private-reserve-zambia.16298/
- https://www.africahunting.com/threads/zambia-takeri-reserve-zambia.24065/
- https://www.africahunting.com/threa...eller-safaris-coenraad-vermaak-safaris.32091/

I know everyone goes for the 470 NE or 500 NE in doubles these days, and since I'm a bolt rifle type of guy (I've always hunted with them) I'm just chiming in from the bleachers, but I've always thought the 450-400 was one of the coolest calibers in a double rifle. The fact that Jim Corbett used it on man eating tigers in India just makes it even cooler. 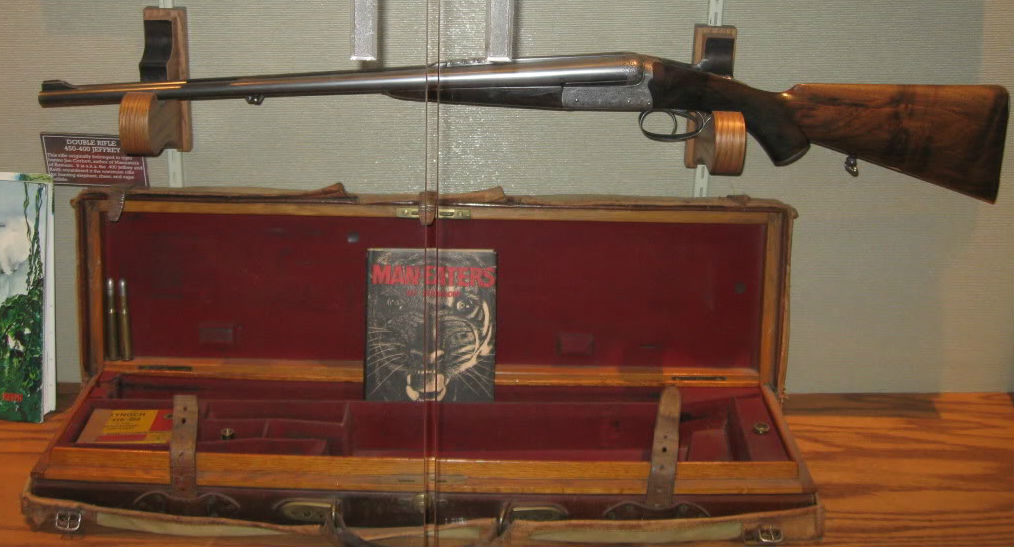 sestoppelman said:
I think the 9.3x74R with good bullets driven at good velocity which it is quite capable of, would be adequate for buffalo. The 9.3x62 has long been given a pass for buffalo in some countries and they are capable of the same exact thing. .
Click to expand...

+1. Always had good results from my Merkel and the 9.3mm round on Buffalo.
You must log in or register to reply here.

Downsizing to Matched Rifles...is it worth it?
2