NAMIBIA: Eland Quest Is Over

The two vertical white shining streaks immediately grabbed my attention because they looked so out of place until I realized it was the horns of the eland bull we had been tracking. The late afternoon sun at my back illuminated the horns like two white glow sticks. Seconds earlier the tracker Willem had stopped suddenly and crouched. He turned, showed me two fingers and with the flat of his hand indicated they were moving left to right. He turned to follow the spoor and that is when I noticed the the horns and it struck me that they towered above the low bush. I gave Willem a quick "Pssssst" He put up the sticks and crouched back down. Rolf Ritter, the PH, moved to my right shoulder, verified the correct bull in my ear and gave me the go ahead.

This eland story started in June 2021 in the same area with the same PH. We chased Eland for five straight days and while I saw some eland, I never really got close enough to study one closely and never a bull worth putting a lot of time in on. I rebooked for 2022 for the sole purpose of chasing eland and if successful we would look for waterbuck, baboon, and jackal.

We were well into day three of this years hunt without a decent glimpse of a good bull and I honestly was beginning to feel the pressure. Driving the bush trails and stopping at water sources to look for tracks was beginning to seem routine. Willem would spot a track, jump down and study the ground. He might even follow it a ways into the bush but he always returned without the excited waving I had seen from him during other hunts for oryx, duiker, springbuck and warthog.

The shadows were beginning to lengthen and my dry throat was beginning to look forward to a cold Tafel lager as the Land Cruiser bounced down the sandy track. Willem and I simultaneously caught a glimpse of eland off to the right. When I say glimpse I mean I could tell they were eland. Willem on the other hand practically jumped over the side rail saying get your gun and lets go. Obviously he saw something I didn't. I chambered a round in my Model 70, .375 H & H , loaded with 270 gr. Barnes TSX bullets and 69.5 grs of RL 15. A quick conference and we off on the track. Ten minutes of slow movement brought us to the moment of truth. I laid the rifle in the sticks and found the eland in the Leupold 1.5 x 6 x 24 scope and knew immediately that that big bluish body on the left was my target. The crosshairs settled just behind the right shoulder as he quartered slightly away and I tugged the trigger. The shot felt right and the the bull spun left while the other four eland scattered. The PH and tracker moved off to check for sign, each taking a different game trail. I followed a few yards behind and where a trail split, I stopped to watch the PH and tracker work and where I stood, I looked down and saw the first blood. I motioned to the PH and as he turned toward me, Willem whistled and pointed ahead. I hope the pictures do it justice because I was stunned by the size and bulk of this animal.

Earlier in the same day, I shot the Waterbuck pictured below. Not nearly as exciting but we ran across some fresh tracks and decided to follow them up a ways. We came to a grassy opening where we could see 6 animals including two small bulls and 4 cows. We eased up so we could see farther to our left down the break in the bush and spotted three more bulls. The PH immediately said shoot the one on the left. Up went the sticks and I settled the rifle in place and realized this would be the longest shot I had ever taken in Africa at close to 200 yds. I asked for Willem's shoulder to steady my right elbow, confirmed the correct bull with Rolf and let it fly. I didn't hear the impact but I could see the bull laboring behind the others as they moved into the bush. We quickly covered the distance to the spot the Waterbuck were standing. Willem picked up the track right away and not 40 yds in, the bull was down. 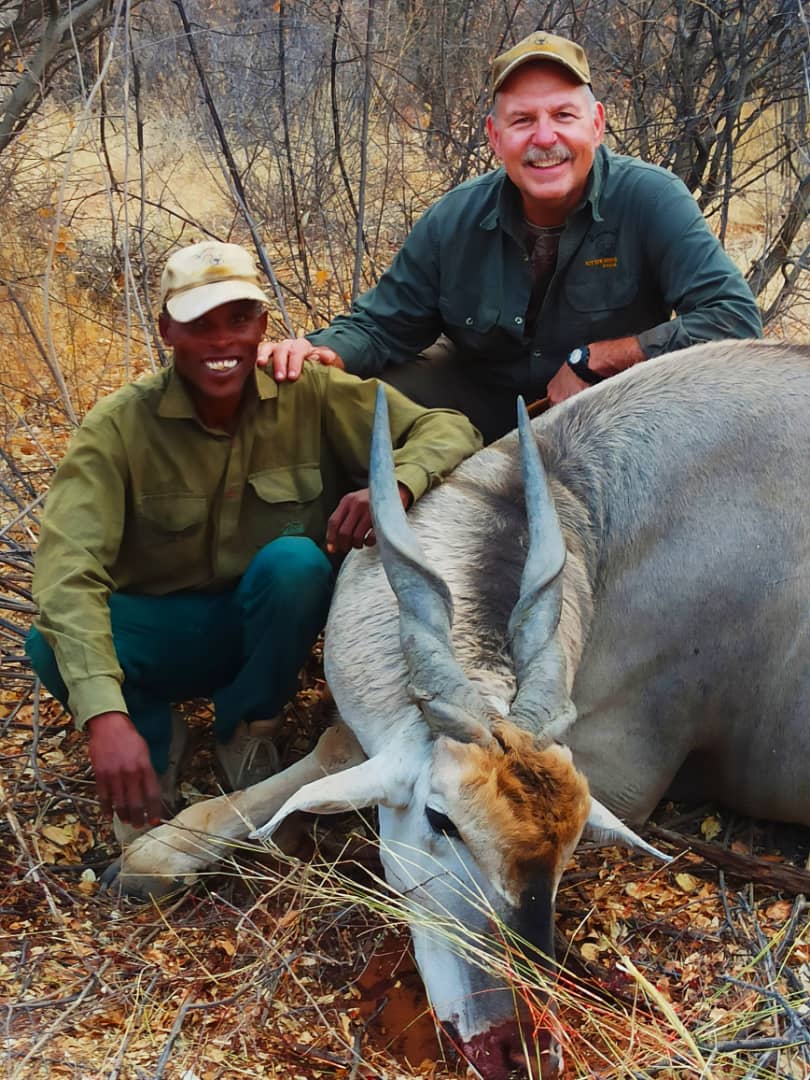 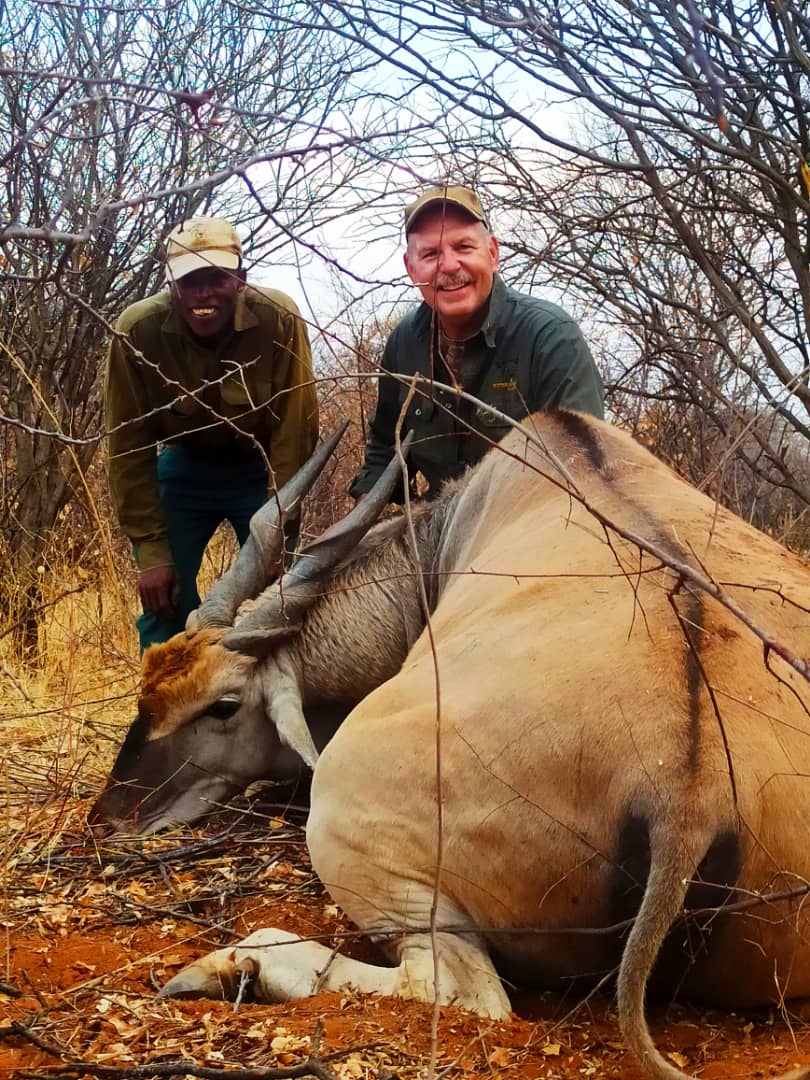 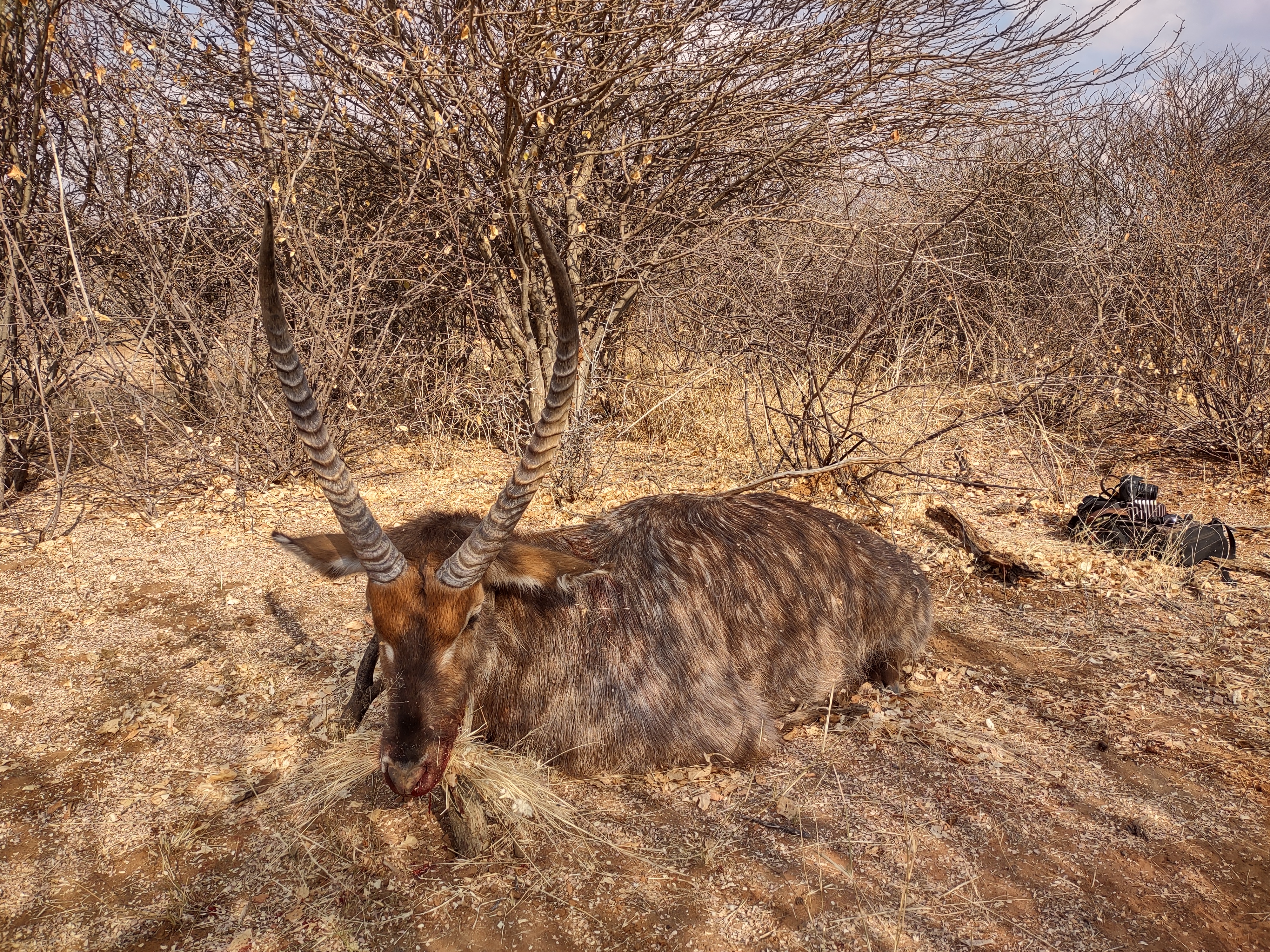 Nice Eland, a free range “blue boy” is a challenging hunt. I see from your beer this was Namibia.

Fantastic, a great trophy indeed...
Thank you for the report of your challenging and very rewarding hunt.
A well written and very well ended story

Congrats on the old bull!

Congratulations on getting a very good Eland.

I’d say your eland quest is just beginning. It’s one of the few animals I never see myself getting tired of hunting.

Congrats. Nice bull. Enjoyed the story of your hunt.

You wait soooo long and then it happens in short minutes. That’s a fun hunt, congrats on your well earned trophies!

Congratulations. Very Nice
Life is not a journey to the grave with the intention of arriving safely in a well preserved body, but rather to skid in broadside, thoroughly used up, totally worn out, and loudly proclaiming, “Wow what a ride!“

375Fox said:
I’d say your eland quest is just beginning. It’s one of the few animals I never see myself getting tired of hunting.
Click to expand...

I agree! Have you hunted Livingstone Eland, or the Lord Derby Eland? Something to look forward too!

wildwilderness said:
I agree! Have you hunted Livingstone Eland, or the Lord Derby Eland? Something to look forward too!
Click to expand...

I’ve taken Livingstone and cape elands. I have my LDE hunt scheduled this January, really excited for it. I’d like to get an eland in mountains in eastern cape for a different experience too. I really think they are a better hunt and trophy than a buffalo.

Congrats!
Your hunt reminds me of mine, this year. I did to spend time tracking eland, (till last moment) and got waterbuck as well!
Well done!

NAMIBIA: From The Smallest To The Greatest

NAMIBIA: FROM THE SMALLEST TO THE GREATEST NAMIBIA: Von den Kleinsten bis zu den Größten There was no time to set up the sticks! I was shooting from the hand. The distance was about 40 meters and my hands were hard to steady. I wanted the stick or any kind of rest badly, but that was not an...

375Fox said:
I’ve taken Livingstone and cape elands. I have my LDE hunt scheduled this January, really excited for it. I’d like to get an eland in mountains in eastern cape for a different experience too. I really think they are a better hunt and trophy than a buffalo.
Click to expand...

Great, where are you going for LDE?

375Fox said:
I’ve taken Livingstone and cape elands. I have my LDE hunt scheduled this January, really excited for it. I’d like to get an eland in mountains in eastern cape for a different experience too. I really think they are a better hunt and trophy than a buffalo.
Click to expand...

surely not! Eland don't look at you like that, and then kill you..
Carruthers

Congratulations! I just looked in to check out AH here while on safari. I just took an eland this morning as well, and when I saw the title “Eland quest is over” I was drawn straight to it! Super bull, and really nice photos. Congratulations again

Eland in Namibia is a fantastic hunt. Congratulations on a great bull.
"There is nothing so good for the inside of a man as the outside of a horse."- Winston Churchill
You must log in or register to reply here.