Since I was already in Africa I had this bright idea to add on another cull hunt or two to my schedule. I posted online that I was looking for a couple of cull hunts in Botswana or Namibia. I was looking for someone who would be available in the next two or three weeks. A Botswana Outfitter was booked those days and Patrick Reynecke from Bushwack Safaris (www.bushwacksafaris.co.za ) recommended Jacobus from Hawk-Eye Safaris (https://www.hawkeye-safaris.com) in Namibia. I wanted to hunt in another country that I have not hunted before.

Jacobus was done hunting for the year but took me on anyway. I was changing tickets and working out dates while I was in Victoria Falls. So I flew from Port Elizabeth to Johannesburg to Windhoek. Windhoek is a small airport.

Jacobus picked me up, and we drove 4 hours to his farm. Roads were good, and we saw both domesticated and wild animals along the roads. The little bit of rain they get runs off the roads, and some grass grows along the road. Patrick explained the effects of the drought, with many farmers selling off most of their cattle. He brought in the cattle and goats closer to the house to be fed and watered and to leave what is left of the grass to the game animals.

Patrick built a couple of chalets upon a hill two miles back from his home and farming operations in the bushveld. That way you do not hear the cattle, roosters… It was very quiet except for the doves in the morning.

Day 1 We started a little late with breakfast at 7 AM followed up on checking his zero on a Ruger Mark II in 300 win mag with a silencer. The tracker dropped us off at an elevated shooting stand about 4 meters off the ground over water. I appreciated the stand because of the advantages of the stand-in hunting, plus you got a breeze. It may have been a warm breeze, but it was better than no breeze on the ground. Yes, I have returned to hot weather again.

We saw Nyala, a troop of baboons, several kudus, impalas. We were cull hunting for eland, kudu, blue wildebeest, impala, and warthog. An old kudu cow came in at 100 yards, and we took that animal. Jacobus saw a Kudu Bull earlier. He said it had very shallow curves and never would grow into a trophy so off we went after it. We stalked about 300 yards and came to within 10 to 15 feet of the bull feeding. As I put the rifle to my shoulder or on sticks I do not remember, the bull noticed us and began to leap. I fired hitting him in the spinal cord and dropping him. I do not think I have ever stalked that close to an animal.
We were off to a great morning. 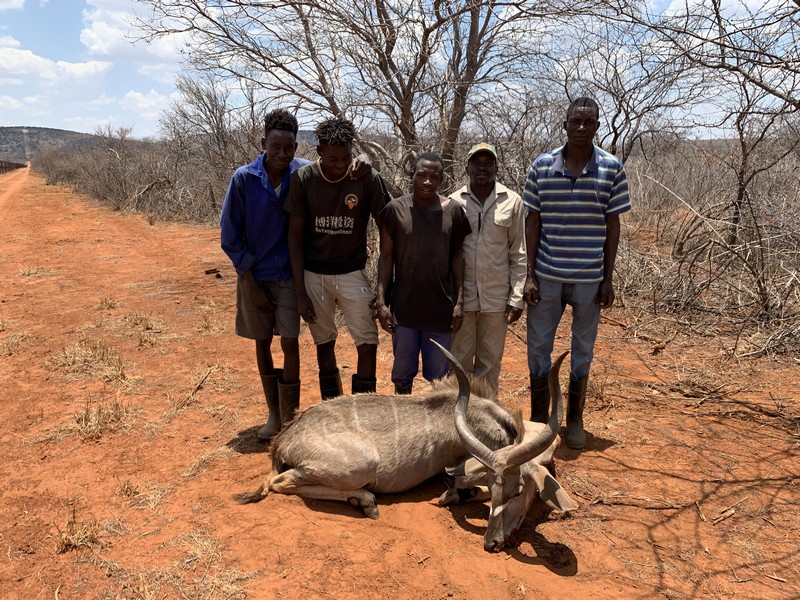 After lunch and a nap, we went back out to the stand. It was like Noah’s ark: Kudu, Lechwe?, impala, warthogs, and Gemsbok including one that went 40”. I was not in a hurry to cull warthogs hoping larger animals would come in 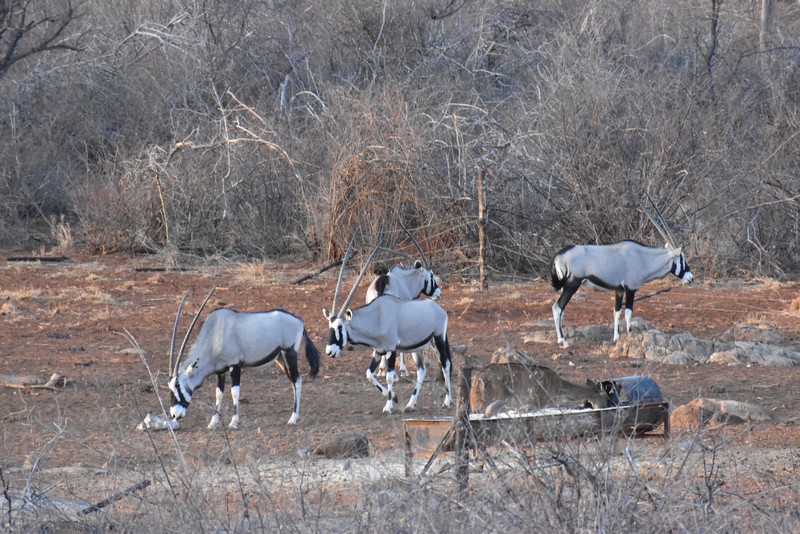 Day 2. We traveled to another farm closer to the Kalahari. Likewise, you could see the effects of the drought. Jacobus farm had some grass but it was brown. This farm had no grass. The sand radiated the heat up to you as you stalked. We stalked and hunted on foot first thing in the morning. I missed an impala high at 298 yards. We continued to stalk for a while but then went to the elevated blind over the waterhole. 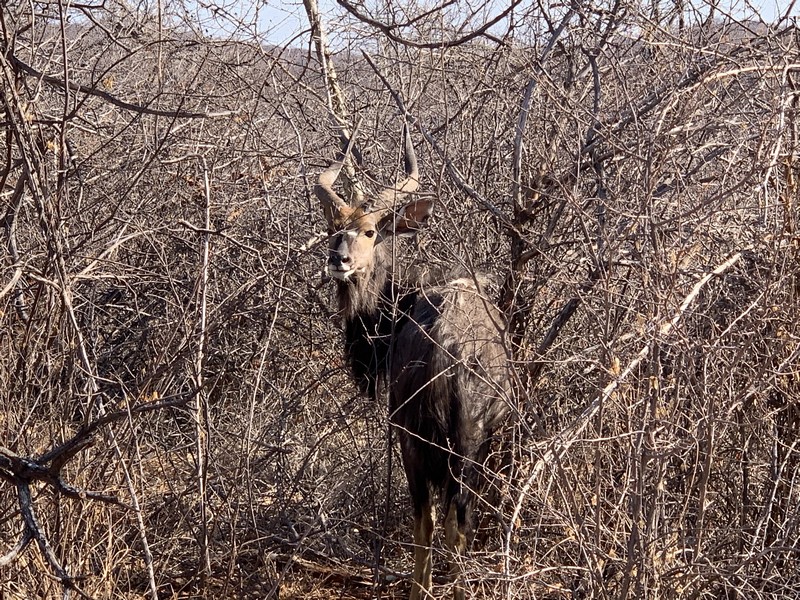 We saw plenty of Impala, warthog, kudu and blue wildebeest. The blue wildebeest always seemed to clutter around each other it was difficult to get a clear shot without hitting another animal. We ended up getting two impalas and two blue wildebeest for the day. An impala and Wildebeest ran, and I was afraid that they were wounded, but we found them tumbled upon the ground within 100 meters where they were shot. A warm breeze and cold water were welcomed that day – actually every day. 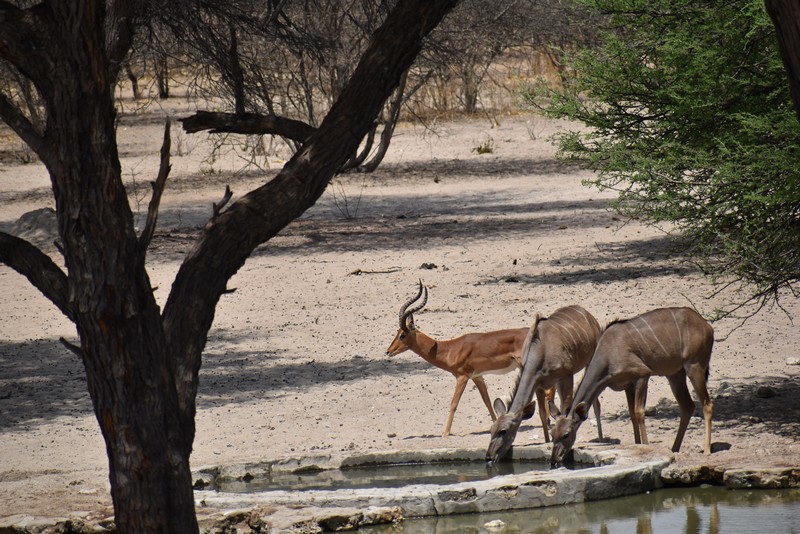 Day 3. It rained last night, so we spent much of the morning on foot looking for eland tracks without any success. It seemed they bedded down near the water last night and were still in that area. We sat in the blind until early afternoon and saw some young eland, kudu, and nyala.

We returned to stand after lunch and quick nap. Saw the same zoo of animals waiting for an eland to cull.

Day 4. Back in the stand earlier in the morning. We saw Kudu, duiker, steenbok, nyala, and warthog. Shot a warthog for rations.

We visited the town of Tsumeb for lunch, souvenirs and visited a small museum that was pretty interesting. The museum was devoted to local tribes, mining industry and World War I. To me as a former Marine Artillerymen, I enjoyed the artillery pieces that were on display and their story. When the Germans were going to lose to the South African Forces during world war 1 they dumped the cannons and equipment into a lake. Supposedly they dumped gold as well. In the 1980s a group of guys recovered some of those cannons and restored them. Jacobus’ cousin was one of the divers and lost his arm in one of the first dive operations. He later returned without his limb and continued to dive. 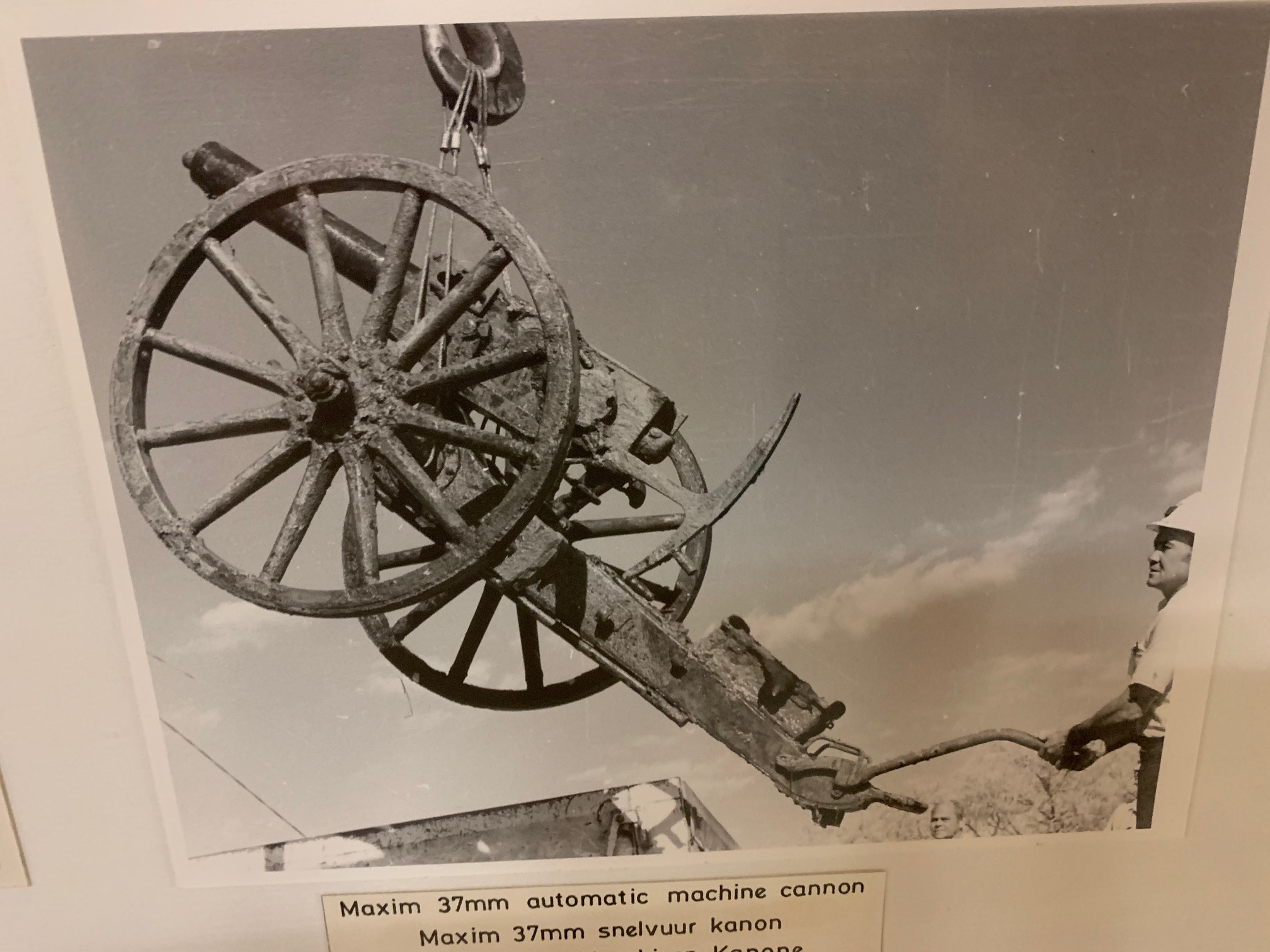 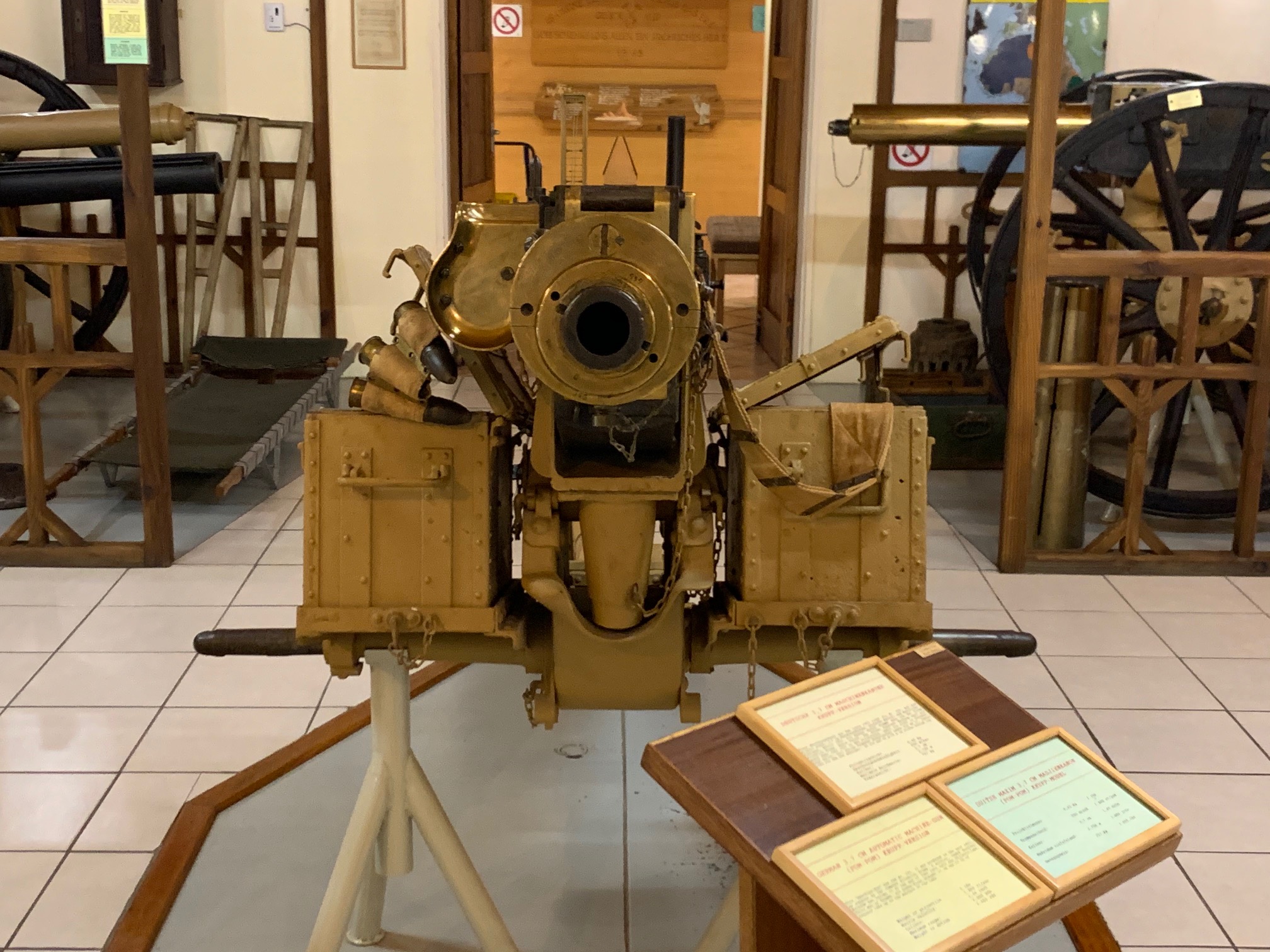 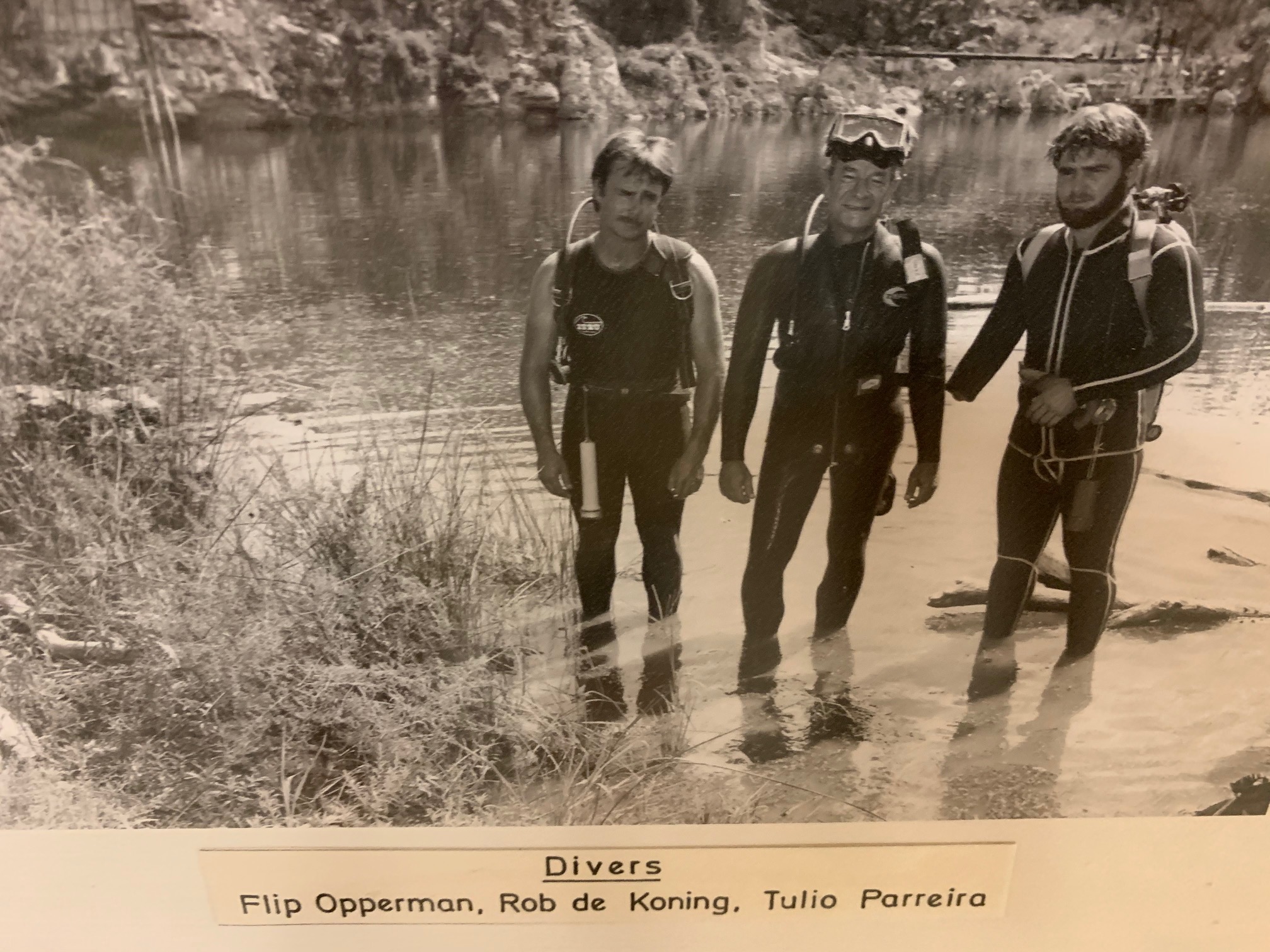 After lunch, we went out again earlier about 2:30ish and set in stand. The normal species filed through the watering hole with three elands coming through. He told me which one to take and I shot as it quartered away from us. The eland rand about 40 to 50 yards and was finished. 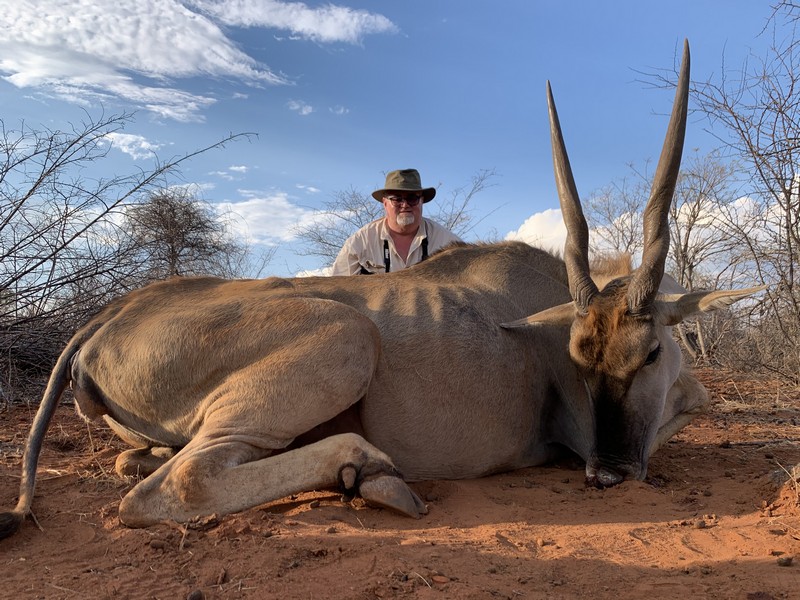 Day 5 We hunted in the morning. It was cool and peaceful. We saw Kudu, Nyala, and Duiker. We only hunted the morning. Jacobus drove me to Windhoek that afternoon. I did not want to rush the next morning having to spend all that time traveling.

All of these hunts went by fast; actually a blur. I have never eaten so well. Jacobus wife Nicola made some wonderful meals. She made the most wonderful Melba pudding that melted in your mouth. The operation is a family-run operation and Jacobus and Nicola go out of their way to make sure you are happy and everything goes smoothly. I appreciate Jacobus taking me on such a short notice and providing a great experience. He is a very hard working PH. I learned a lot and have a lot to learn about Namibian history. Oh. I missed about 3 times and all my shots to the animlas were less than 100 yards.

Sounds like you had a great time. Thanks for sharing.
Bruce

Tommorow is promised to no one. Go live your dreams.

What a trip! It looked and read like a grand adventure! Thanks for allowing us to enjoy your trip!
Africa on my mind.
You must log in or register to reply here.