How Many Rifles To Carry On Safari?

How Many Rifles To Carry On Safari? 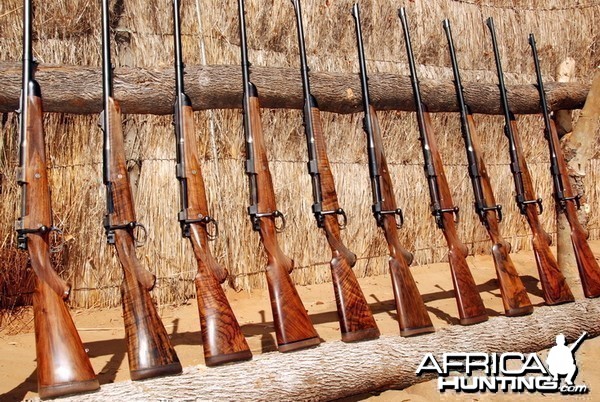 Stalking today in Africa, it is advantageous to carry only one rifle, but be prepared to shoot different animals from very small antelopes to buffalo or even elephant.

Two rifles for the purpose of having a back-up if something broke is crazy. The most frequent mishap is, the rifle doesn't arrive with the baggage. The only solution is, to borrow one from the operator.

Next frequent, something is wrong with the scope, knocked by a fall or so. Therefore I carry a spare scope with me.

A malfunction of the rifle is nearly impossible if it is checked carefully at home before leaving for the hunt. In any case not worth to carry a spare rifle.

If not needed for very very long distances, for normal hunts in the African bush, I need only one rifle, e.g. a .458 Lott, which is good for any dangerous game and plains game. Up to 220 yards the .458 400 gr softnose at 2600 f/s is the right performer for all the smaller animals.

Other than hits to the central nervous system (brain and spine), the only reliable cause of rapid death is by hemorrhaging produced by cutting a hole through major blood-bearing organs (heart, lungs, liver) or major blood vessels. The dimensions and location of the cavity produced by the bullet will determine the rate of hemorrhaging and in turn the rapidity of the onset of death.

If using a relatively big caliber (.458) on smaller antelopes the pressure wave accompanying the temporary cavity can inflict a stunning blow on the spine or other parts of the nervous system (nerv. vagus) if the bullet passes nearby and, while not damaging, this may result in instantaneous unconsciousness from which the animal never rouses (because it bleeds to death in the interim).

The use of high powered weapons on very small animals (birds) causes: the volume of the expansion exceeds the dimensions of the animal and it is literally blown apart.

It is best to aim for the center of the thorax and leave a margin of error on all sides. This will be highly lethal even if range estimation or wind or steadiness or a sudden movement by the animal (or all of these) interfere with the shot; unless one has ideal shot placement conditions (absolutely known trajectory, still target, no wind, steady rest, etc.).

There is no good reason today to use a double rifle. It is only useful for close distances and not faster with 4 shots than a quick and reliable bolt action. Reloading and the recovery after each shot of big calibers takes up the time on the double.

Some hunters are carrying two rifles, because they are not willing to suffer from the heavy recoiling rifle for all the days of their safari. 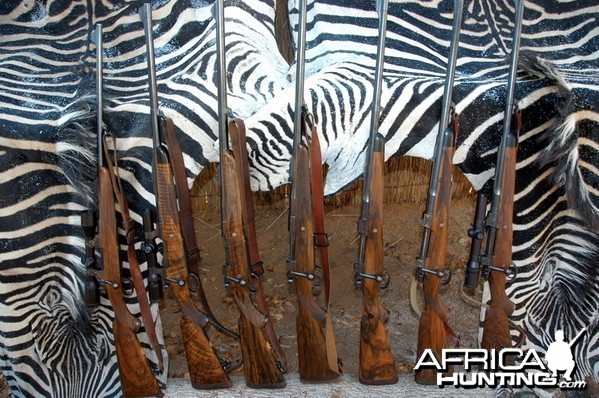 To have an idea about felt recoil or to compare recoil of different rifles, it is not advisable to use the recoil energy or recoil velocity as it usually is done. The most important figure is the recoil acceleration. That makes a quick burning shotgun so nasty compared with a slow burning rifle of the same energy etc. That gives also ideas for the measures to lower the felt recoil by using thick recoil pads with good absorbing properties. You must give way for the recoiling rifle (see artillery guns with their long damped back movement, you can put your hands on it and feel not too much recoil). Other factors are the angle between the axis of the barrel and the point of contact with the shoulder. It should be not too small, but there is a compromise for scoped rifles with respect to the upward movement. Also a pad as broad as possible should be used.
Last edited by a moderator: Dec 1, 2016
Norbert Hansen
www.grosswildjagd.de
You must log in or register to reply here.

N
How Many Rifles To Carry On Safari?

One or Two Rifles?