Looks mighty fine sir...look forward to a range report on her
Nathan T.

Very nice rifle you got there....
"I have taken more out of alcohol than alcohol has taken out of me.” Winston Churchill

"Amani haipatikani ila kwa ncha ya upanga".. Peace is not possible except by the point of a sword..
S

Now Voodoo, what you need to do is put aside the plan to buy another double and go book a Safari and use that one you just go your hands on to down a Buffalo or three.
Or bring along that 5oo Jeffery and give it a good work out...

Voodooracer said:
I just picked up my first double today from my ffl, this has been a long time dream of mine second only to my dream of going on safari. I'm sure this won't be my last double either. It has some wear but is still in great overall shape. I apologize for the photos, I don't have the best lighting. I will snap some more when I take it out to shoot it. It had the regulation targets with it and it was regulated for federal 500 gr loads. I grabbed a box of hornady dgs ammo and have ordered a box of Barnes 500 gr solids. I'm hoping they will group decently. If not I will probably have it sent to champlin arms to have them re regulate it for the Barnes loading. I will probably send it to them either way to install a warthog ivory front sight bead. The current brass one picks up great but in bright sunlight I could see it being a little tricky to pick up. I picked up some snap caps and the triggers break very cleanly, they are a little heavy but am glad they are. The ejectors work perfectly, throwing the snap caps 10 or 15 feet. Unfortunately I have to leave for a work related trip this weekend so I won't be able to shoot it until next weekend. I'm just happy to finally have it in hand!
View attachment 191857 View attachment 191858 View attachment 191859 View attachment 191860
Click to expand...

That is really beautiful wood and a fine looking rifle. Congratulations!

Thank you everyone! You are exactly right SWARA. I definitely plan on going on safari before I buy any more rifles. I will just have to go on a couple safaris to use the 500 jefferey and double

I haven't really thought about those but will definitely keep them in mind! Thanks for the suggestion! The rifle appears to have been fired very little since it was made in 2005 so hopefully it will like a range of different bullets.
U

I have its twin in .375h&h, lovely rifles, I appreciate in a crisis the French have had their reputations but the chapuis rifle is something rather marvellous and a snip of the price of s lot of their equals. Happy hunting with your new toy!
I

What a beautiful rifle!!

I must apologize for falling away from this thread, work has been extremely busy and I have been doing a ton of traveling over the last 6 months. I have been able to get out to shoot the rifle once so far to my dismay haha. I picked up some hornady 500gr solids to practice with. Clearly the rifle was not regulated with them but I was able to get on target, albeit a bit low which I think was partly my fault. The rifle was regulated with a federal load, so I plan on picking up a box of that in the future to play with. Ultimately I'm kind of toying around with having it re-regulated by Champlin arms for either hornady or Barnes but haven't decided yet. I definitely want to have them upgrade the front sight as the small brass bead is a little tougher for me to pick up than a white dot. I'm still very pleased with the quality of this rifle. I plan on another range trip very soon.

Beautiful rifle. Do you have a pic of it with the action open?
CRS, NRA Patron Member, DRSS, DWWC, TSRA, Whittington Center,
Android Ballistics App athttp://www.xplat.net/

Thank you, crs, I just happened to have the rifle out so I snapped a couple pictures of the open action. 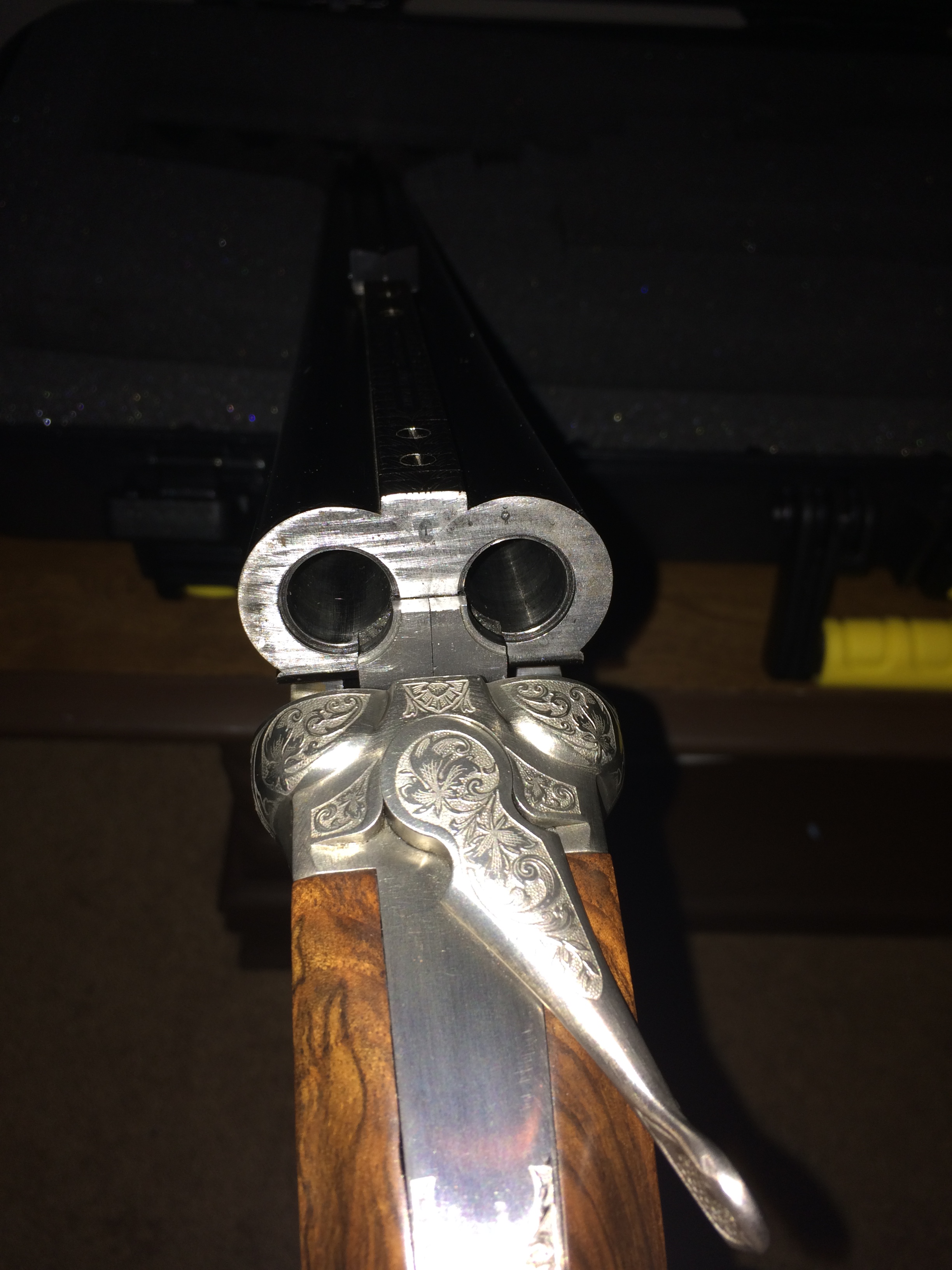 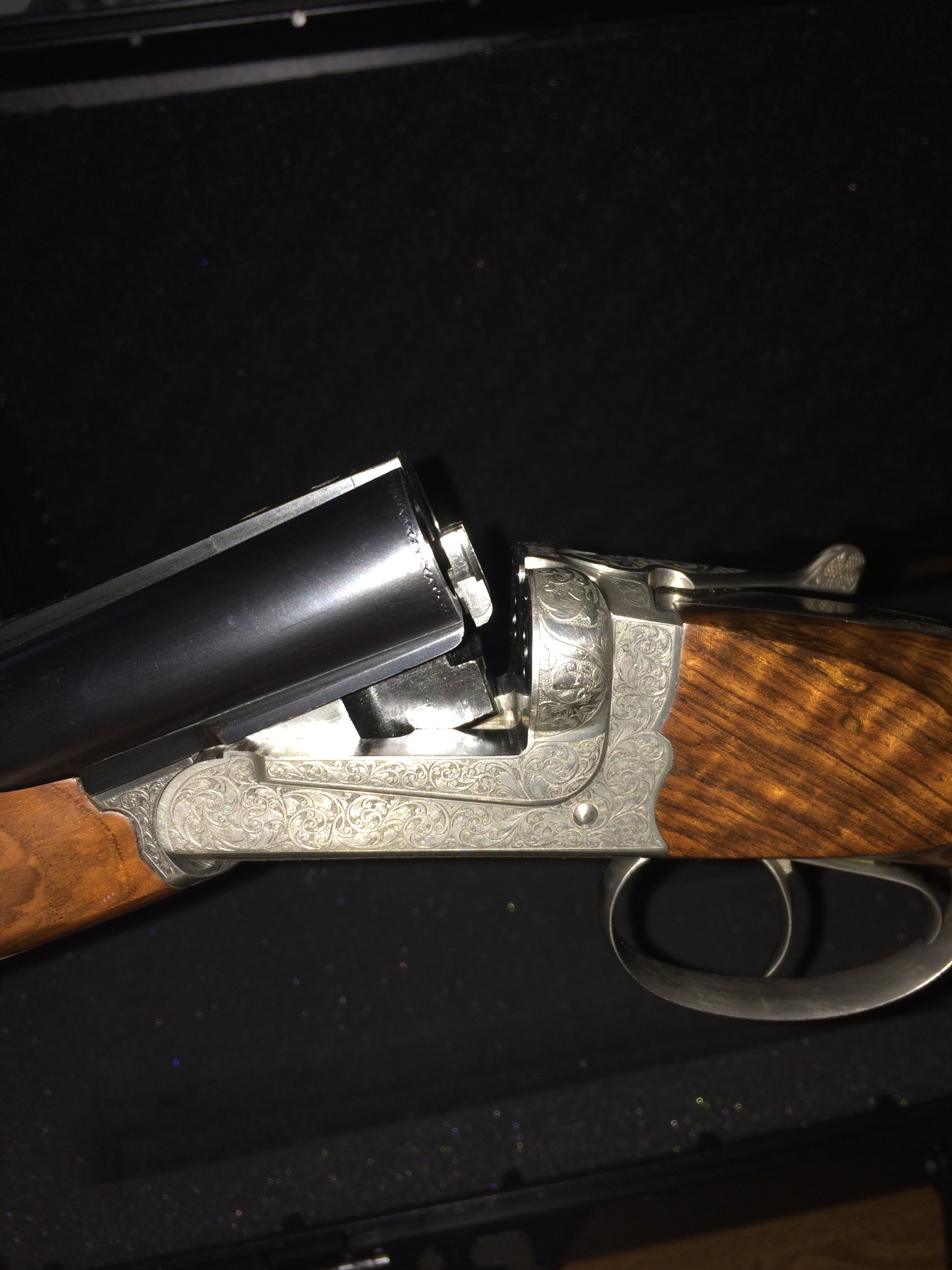 Thank you for the pix and congratulations on what looks to be a very solid gun.
Look forward to a range report.
CRS, NRA Patron Member, DRSS, DWWC, TSRA, Whittington Center,
Android Ballistics App athttp://www.xplat.net/
You must log in or register to reply here.

Where are all the American double rifle makers