This is for my 7mm stw. I’m working up a load using the Sierra 165 Gamechanger. Powder is magnum and this was 77.7 grains with a coal of 3.625. Shot a five shot group and after the fourth shot I got this piece of brass. You can see the dent below the shoulder and the crack-which I would ordinarily call a headspace crack-I had this happen one other time, also only one of five shots and that was when I was testing the load at 3.615.
I’ll run it by the gunsmith for his thoughts but any of you have ideas for me? 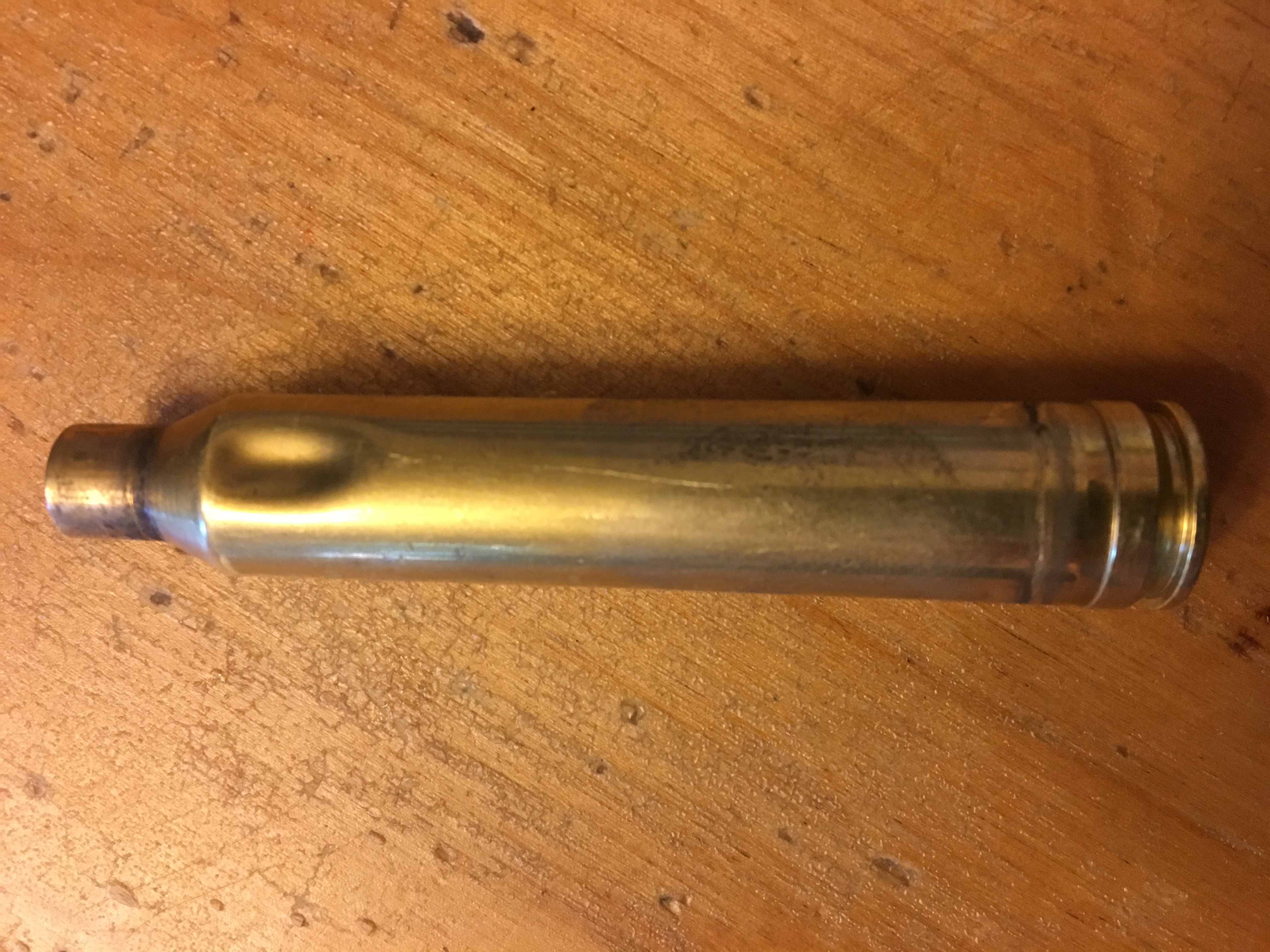 How many loads do you have on that case?
"Montana seems to be what a small boy would think Texas is like from hearing Texans" John Steinbeck

The dent below the shoulder I believe was there from the beginning? Prob due to over calibration and/or to much lubricant.
If over calibration the case stretched and cracked when fired.
Did you wipe the brass after firing ? Looks to clean..
Same question: how many reloads ?

What do you mean by over calibration?

Dent not there prior to firing-all cases wiped down after loaded but not after being fired. this was the fourth loading for this case-although. . . previous loadings may have been with heavy or hot loads as they were used for load development. Ive shot 45 pieces of brass in that batch and only 2 have had this exact problem. I'm working with the theory that the bullet was seated too deeply, not sure why one in five did that, very random. Primer pockets still tight

1. could be an oil dent. Excessive lubrication of the bore or chamber causing a oil drop which dents the case neck.
2. Low pressure load and/or excessive freebore. Case isn't obturating properly so gas blows back past the neck leading to the dent. Glancing at the noler book, min load of Magnum is 80gr...
3. Case necks need annealing. Again, neck is too hard, doesn't obturate and gas blows back causing the dent.

I reckon possibly the dent is causing funny pressure spikes or not allowing the brass to flow back properly in the chamber. As a result you get the case head seperation thing. Not quite so sold on this idea though, so pinch of salt required?

All conjecture, but might be worth seeing how close the load is to max, annealing the case necks and checking the chamber for excessive lubricant.

No way a dent wouldn't pop out during firing and it'd be hard to miss that, so gotta be a rifle / firing issue, not a reloading one.

Did you by any chance clean and oil the bore and store it in a vertical position? That dent certainly looks like the "oil can" dents I get from resizing with too much lubricant.
B

that case seems to have black powder fouling on the full neck and shoulder.
this indicates a lack of obturation on the neck when fired.
gas is blowing back around the outside of the case.
2 potential issues here.
necks too hard for the pressures being used, need partial annealing.
shoulder could be getting pushed back excessively on sizing.
looking in front of the belt there appears to be what could be a case head separation about to happen.
as the case headspaces on the belt, pushing the shoulder back more than necessary can cause this.
when reloading belted cases it is wise to set up the die to correctly headspace on the shoulder.
if you don't do this, treat brass as expendable, and leave it on the ground.
without seeing the case in the flesh, this is a guess.
bruce.

Do you just neck size, or full length resize?
Not likely you pushed the shoulder back if you only neck size. I wouldn’t think even work hardening would cause the gas from the bullet end to come back passed the shoulder since it should headspace on the shoulder, but if you are actually headspacing on the belt (as the original intent of a belt), then it could easily.
I always use the shoulder to headspace on even on my belted cases such as 375 H&H, 300 Win Mag, etc. Even though they have the belt.
Africa on my mind.

Looks like gas escaped from the crack at the head and moved north until it hit a soft spot and caved it in.
Captain of the Luddite Society

I had a 338 that after a few full length resizing the case would crack in front of the belt. It looks like your case did the same. The escaped gas may have caused the sent. One of the reasons I have a 375 Ruger.

See some weird stuff here sometimes! The separation is likely headspace, too many loadings and setting the shoulder back too far on resizing. That's the easy one. The dent? You say it was NOT there before firing, and if it was it would have filled the chamber on firing. So a dent AFTER firing.
Did the other times you had the separation also have the dent? I suspect not, seems like a one off, a fluke, or you just didn't notice it and it somehow got dented post firing and ejection. Very unlikely it was caused by gases or anything like that. If gas caused that it would have creased the whole side, not just one spot.
There is not a lot of smoke on the case which might suggest too light a charge.
The dent looks like the sort of dent one gets when the bolt tries to override a case instead of pushing it into the chamber.

Escaped gases from a partial separation go aft, not forward. The case has filled to chamber size and the gas follows the path of least resistance, towards the shooter.
B

that dent was reported on by parker ackley.
he, along with others, felt it was due to poor obturation, but was not prepared to say so emphatically.
a bit like the secondary explosion effect of light charges of slow burning powder, we can really just surmise.
you need to learn how to adjust fls dies, whether for rimmed, rimless or belted.
the shoulder should lightly contact the chamber with a sized case.
the simplest way to do this is with the firing pin removed from the bolt to give good feel as you close the bolt on a partially sized case.
optimum sizing will allow the bolt to fall 1/2 to 2/3 of the way down under gravity, and have to be closed manually on a slight crush fit the rest of the way.
large chambers combined with small dies shorten case life.
small dies can be polished to a bigger size,
I had a ruger 338 with a chamber so big that the seating die actually sized the cases!
bruce.
B

"escaped gases from a partial separation go aft."
and the mauser 98 is still the best design to handle this with safety.
L

A chamber that the case did not seal would have had gas escape.

brass manufacturer is, Hornady ?
B

I have Hornady case fired many times.
like all cases, consistent and correct partial annealing is the responsibility of the reloader.
starline makes cases for blackpowder rounds that need partial annealing to seal at the lower pressures of this propellant, and they advise to do this.
heating the necks to 700 degrees is about right, and the best way to achieve this is to use tempilaq.
you actually use 600 degree tempilaq down below the shoulder away from the flame, so you don't measure the flame temperature.
when 600 melts down there, the neck is at 700 to 750. do no quench.
this offers good obturation with springback that gives ideal neck tension.
bruce.
4

Need to up your powder charge. Going by Sierra manual their COAL IS 3.600 your at 3.625, +.025. Your load is 77.7, Sierra min is 78.5, your .8 below their min. Depending on your freebore your not getting enough pressure to seal the bore and and it can collapse the shoulder like you have. I would up it to 79 or 80 grains and see what it does. Sierra max is 81.4. I've had this issue before. If it still happens it's a bullet/powder combination. Change one of them.

larry4831 said:
A chamber that the case did not seal would have had gas escape.
Click to expand...

If his load was so light and I don't believe it was too light, the case would be smoked big time, from not sealing, and perhaps he might have noticed a slight hang fire. I don't think that's what happened here, but time will tell.

According to the Ramshot site, seller of Magnum powder, the starting load with a 160gr bullet with magnum is 72.9 grs. In the Barnes manual, granted using their own bullets, the starting load for a 160gr bullet with Magnum powder is 75.5 grs. I really don't think his load weight is the culprit here as his load is well above the min loads I just referenced. I have underloaded hundreds perhaps thousands of rifle rounds and have never experienced a collapsed shoulder as shown. Usually what you get is lots of smoke, a filthy case, and hang fires.
You must log in or register to reply here.

Is Match Ammo Worth It?