Book Your Sable Hunts Sooner Rather Than Later

Location
Halfway between Lubbock and Dallas

spike.t said:
but you are talking about "quality breeding stock" in SA............what has that got to do with anywhere else? ok on govnt areas as simon @TMS says the govnt/game dept will increase the fee they make the operator pay but thats not down to him, and other countries where we own the animals its up to us what we charge, but as i said we havent upped our sable trophy price in 4 years or have plans to...........if we were pricing in any other business i have a sneaking suspicion the price wouldnt be the same as 4 years ago...................................
Click to expand...

As a rule where capitalism rules supply and demand are usually the two forces that most affect prices.

In the seventies when Pronghorn hunting reopened in New Mexico we could get in on just about any private ranch that had landowner tags with a few phone calls, handshakes etc and if they charged us at all it was a paltry sum.

Just a decade later it was getting tough to pick those landowner tags up for less than 500.00 and I was seeing them going for as much as 2-3x that sum on really prime areas.

White tailed deer hunting has gone completely nuts here over the last 25 years as well. When I was young there was never a thought of charging anyone in our area to shoot a deer, either you allowed hunters or you didn't. Today you can easily spend 2,500.00/gun annually for a DIY lease. I've seen deer leases in my area go for as much as 25.00/ac per year and that's for "deer only".

Trust me I'd love to be wrong but I'd really be surprised not to see this spur inflation in the price of Sable hunting and I do mean it I'd love to be wrong. There are few animals in Africa I'd love to take before I'm done as to find a wall mate to go along with the Sable I was fortunate enough to take this year.
S 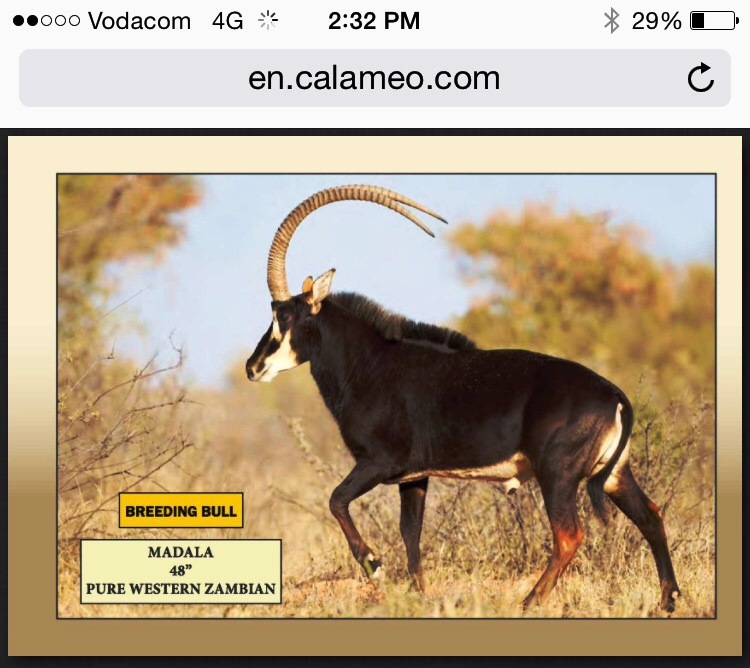 There are maninge sables bulls out there to shoot. You can shoot top quality sable bulls for as little as $4500 in SA.
Don't confuse auction prices with actual trophy prices. That sable bull was bought on auction for breeding purposes only and they are making there money by selling seed from the bull.

I know of one farmer that has almost 1000 sable bulls...and battling to sell them...

So this is a good time to come and hunt/shoot (whatever you want to call it).

james cameron said:
I know of one farmer that has almost 1000 sable bulls...and battling to sell them....
Click to expand...

yeah @james cameron but they are probably those common south african ones..........not nice upmarket zambian ones

@james cameron , I think we all understand the difference between auction bulls and hunting bulls.

27M ZAR that could be found dead in the paddock tomorrow morning!

Simon and any others that may be informed, but do the breeders exercise the practice of artificial insemination with frozen semen? That would be the only way to get close to safely guarding such an investment by collecting as many straws as possible and have them in the freezer.

Phil, I don't know of anyone doing AI on sable. But I do know that insurance is taken out on these bulls.

I think the breeding programs will produce so many sables in the years to come that the prices wont sky rocket as mentioned. you have breeding bulls which are madly expensive and hunting bulls in abundance for relatively good prices.
You must log in or register to reply here.

Buffalo cow hunts how many actually book them ?
2