Shot a 10' 6" mamba in Limpopo (2005) at a waterhole with a "rented bow (Old left handed Hoyt Viper) and borrowed arrows." My bow was stuck in London. In the one photo you can see the arrow in the tree behind the mamba. The next shows me holding the snake -- I was on a slope. And lastly the warthog picture shows that old Hoyt with an ivory handle. I should have bought that bow at the time.
Last edited by a moderator: Mar 18, 2020

The photos did not upload, can you please try again g-ville!
Jerome Philippe, Founder of AfricaHunting.com

:shocked: Never seen a Black Mamba and don't want to!
Enjoy Life Now! It has an Expiration Date.

Never seen a Black Mamba and don't want to! I did see a Cobra on my first safari in 2010 on the East Cape I told my PH thats why I booked my hunts in the winter I don't like Snakes he said it wasn't suppose to be out but they were having some warm weather my trackers started to get it set up for some pics but Rusty said no, they'll do anything for a tip so my tip to them was if you want to live to get some money then leave the dang snake alone!!!
Enjoy Life Now! It has an Expiration Date.

I've just returned from Zimbabwe, a midday as we sat in the dining tent, this snake was slithering 4 meters past where we sat. My Ph called it an Egyptian cobra, but afterwards I have seen pictures on the internet of snakes and it did not look like a cobra, but more like a black mamba.. I quickly managed to get this photos.

Are there any of you experts who can confirm whether it is one or the other ..? 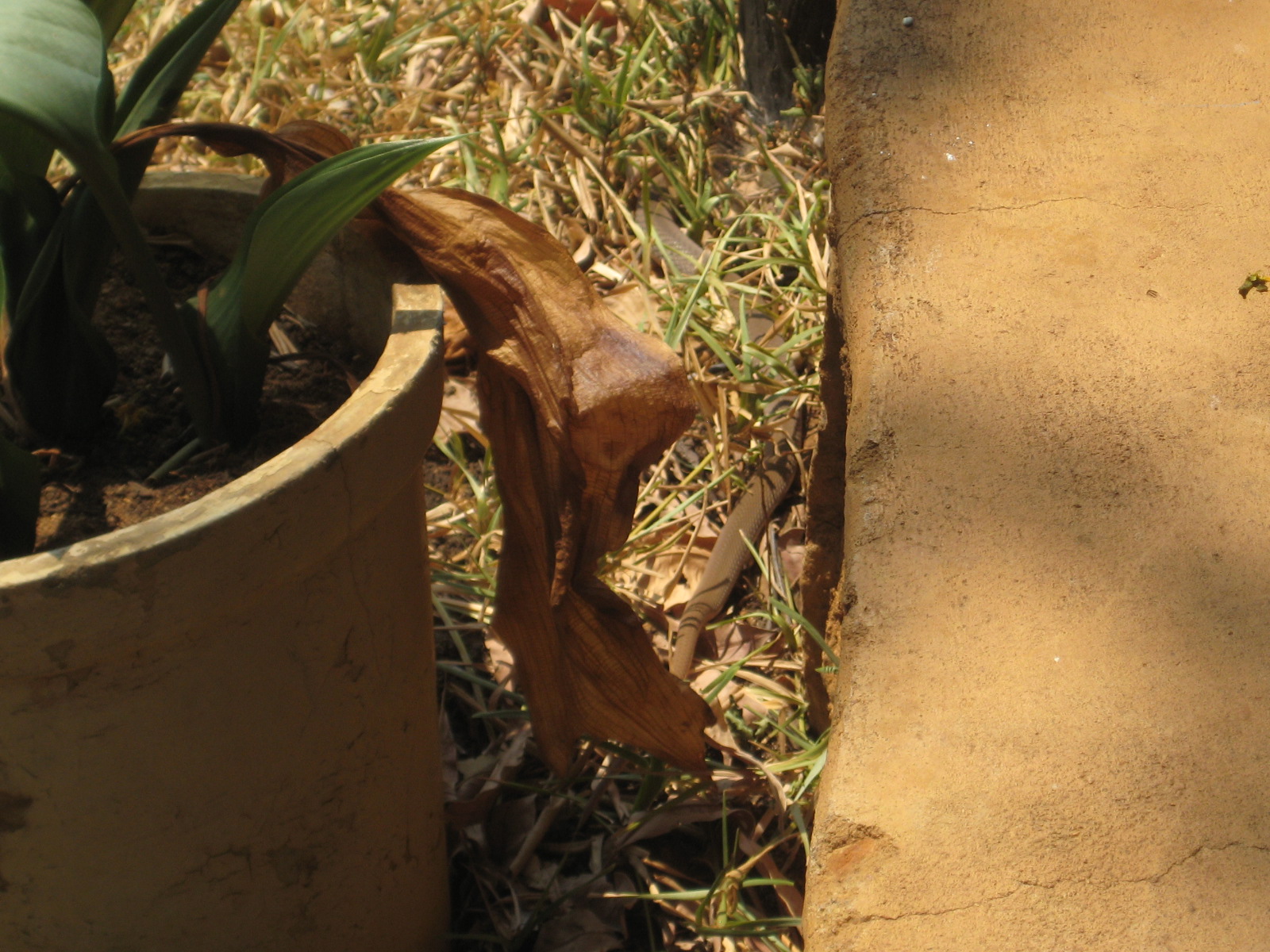 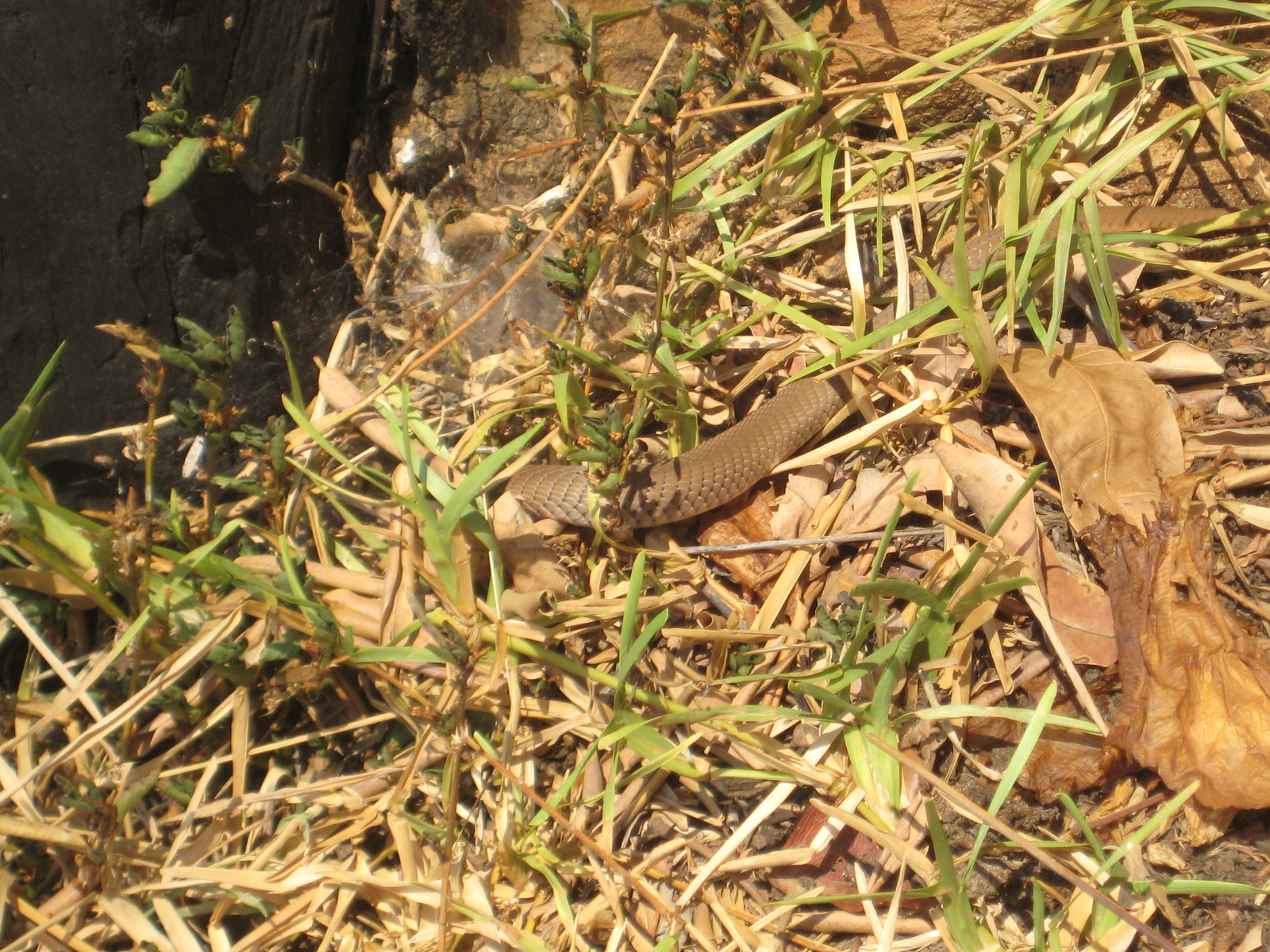 We also came across this more pease full one.. 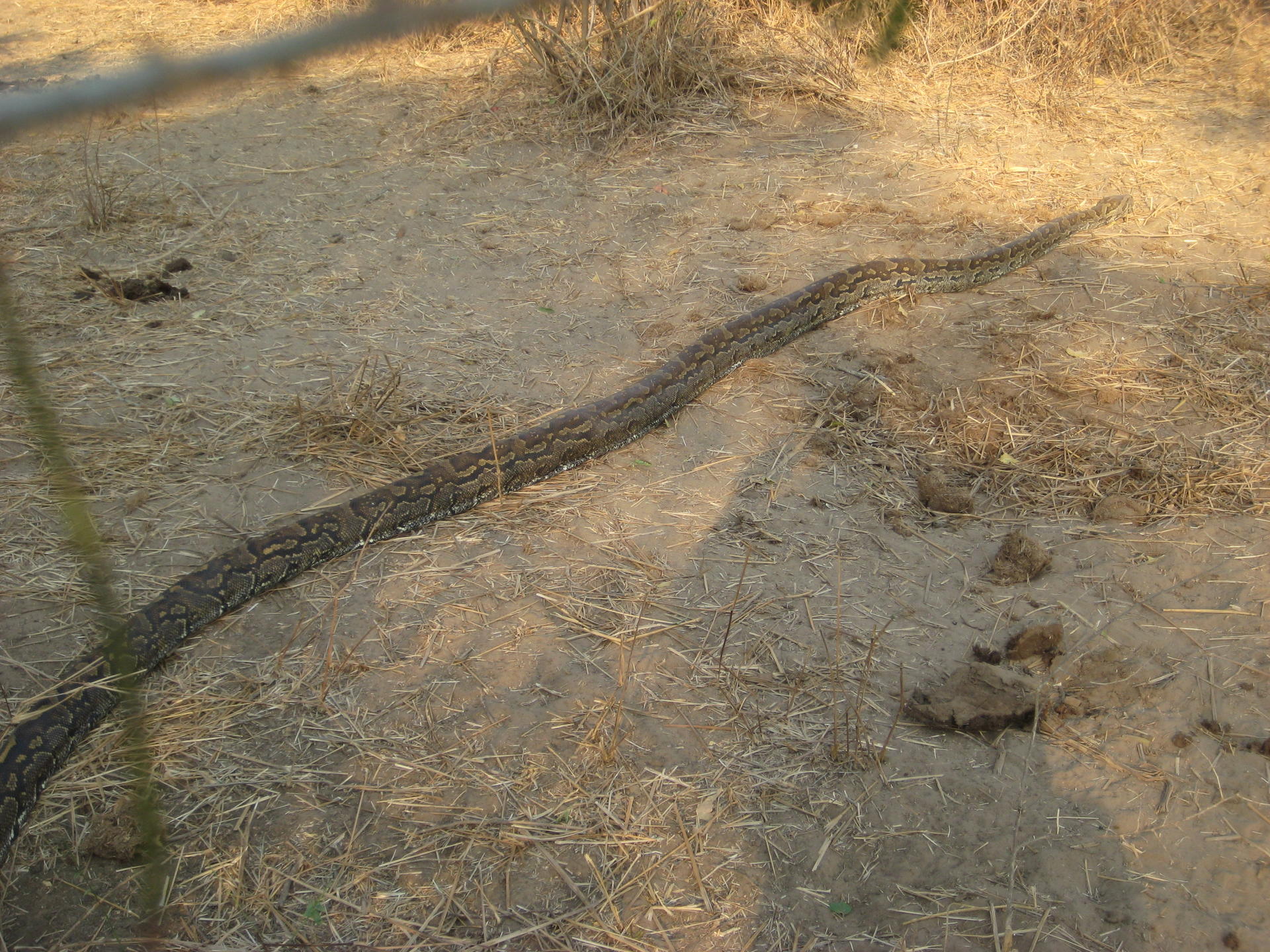 I'm interested in all animals, including snakes. I have a B.S. in zoology and have had many, many encounters with venomous snakes in the States. That said, I think the black mamba is the only one I don't want to encounter. I was hoping to see a Cape cobra in SA and didn't. I did get to see two puff adders which was great.

I got my lesson in picking up "dead" snakes. I was on my cousin's ranch in Montana and came across a rattlesnake laying in the road, it's head was all flattened out. I was sure it had been run over, it wasn't moving a bit, head flattened out, looked like it had been crushed. So, in my infinite wisdom, I stomped on it's head, grabbed it's tail to cut off the rattle. That was when it regurgitated the ground squirrel it was ingesting (thus the flattened head) and now I'm holding a 2 1/2 ft. long, live, healthy prairie rattler by the tail. This was the one and only time I've ever broken my "don't mess with venomous snakes" rule and I almost paid a steep price for it.

I stayed with a family near Grahamstown, SA, and they entertained me with a couple of stories like the puff adder in the laundry room and the Cape cobra in the bedroom I was staying in. It adds a little "spice" to the experience, doesn't it? I mean, there are guys who stare down elephants and lions who start sweating when the topic of snake stories is started. Love it.

When in Bots, we were about 55 ft. away from a cobra, which was about 150 ft. too close. I hate snakes, shoot first, ask questions/identify, later.

Black Mamba shot with a 22 caliber. 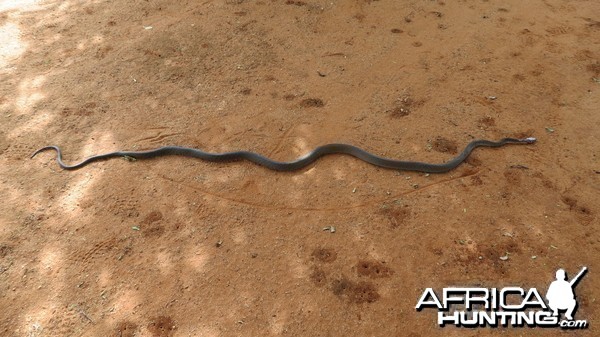 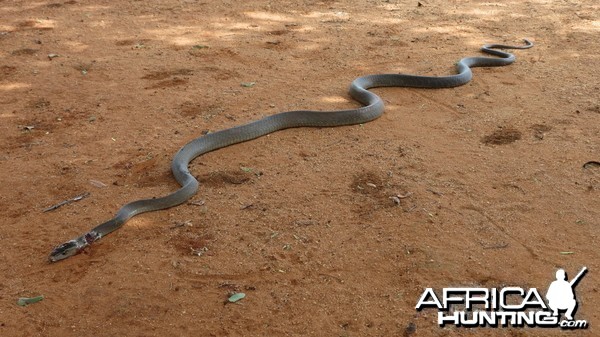 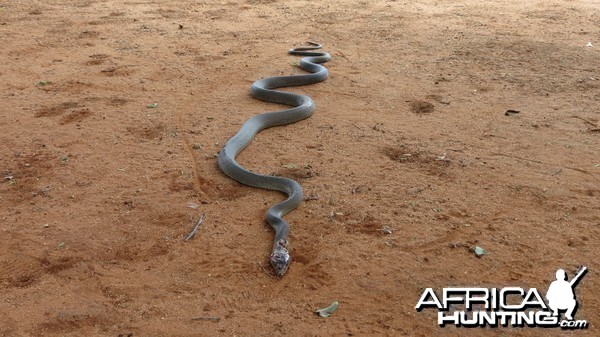 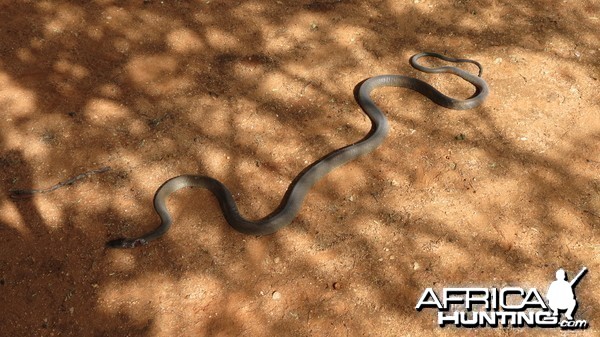 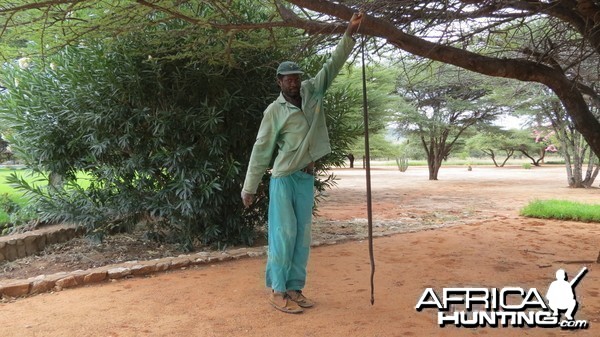 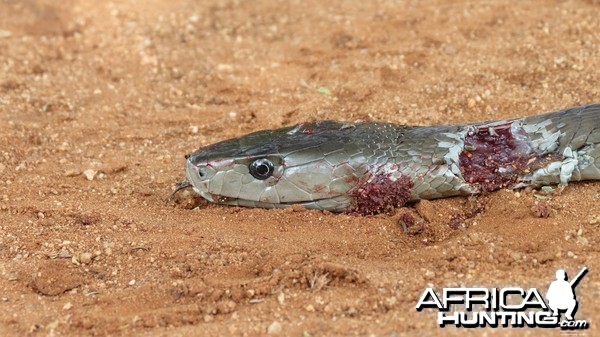 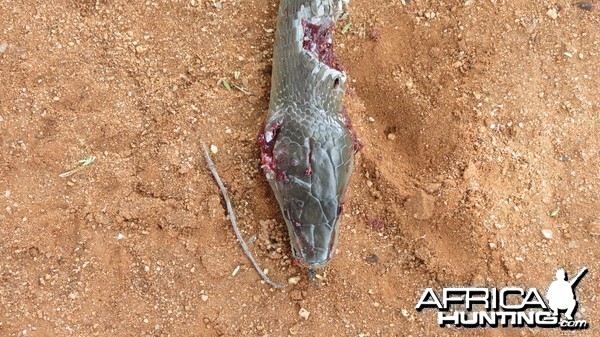 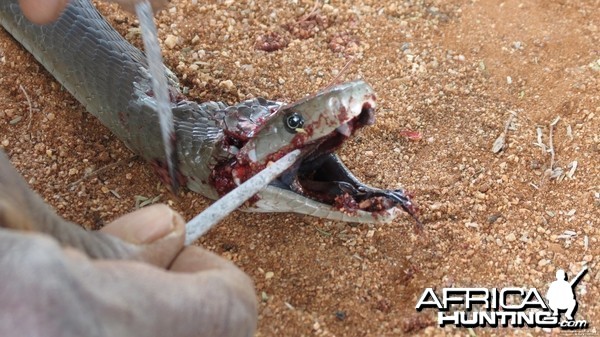 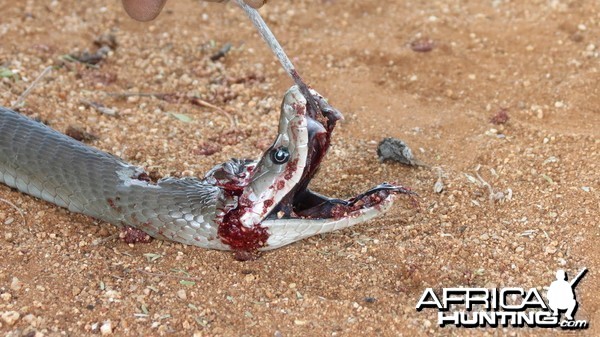 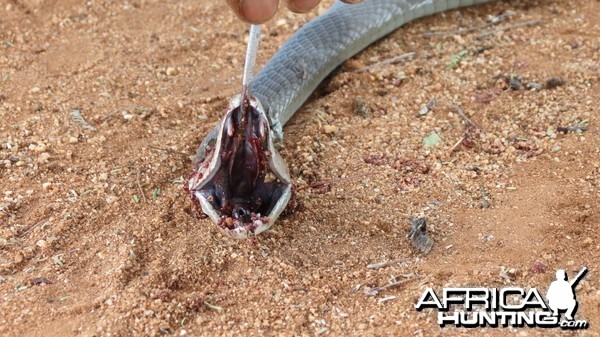 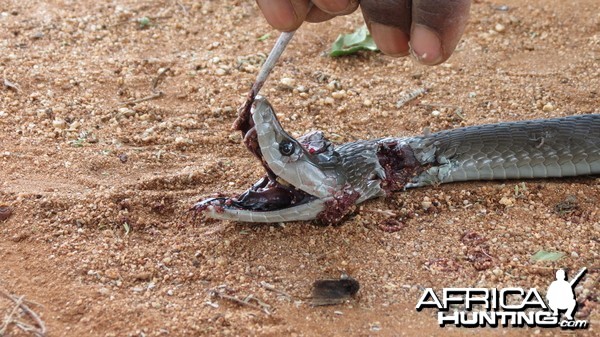 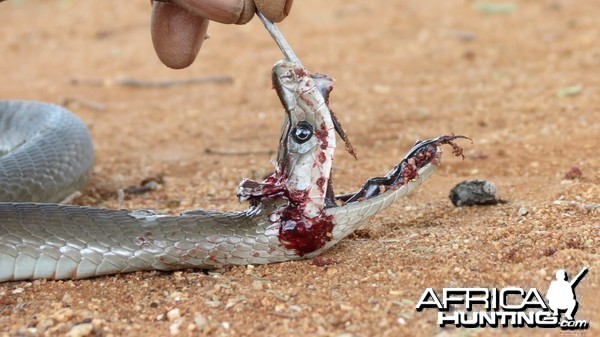 Thank you to whomever did the sharpshooting.
One less I have to worry about in July.

(I hate snakes, read as: scared of them)

Thats my favorite kind of snake"dead".
Enjoy Life Now! It has an Expiration Date.

A kind of reptiles fascinate me, but i do keep my distance. 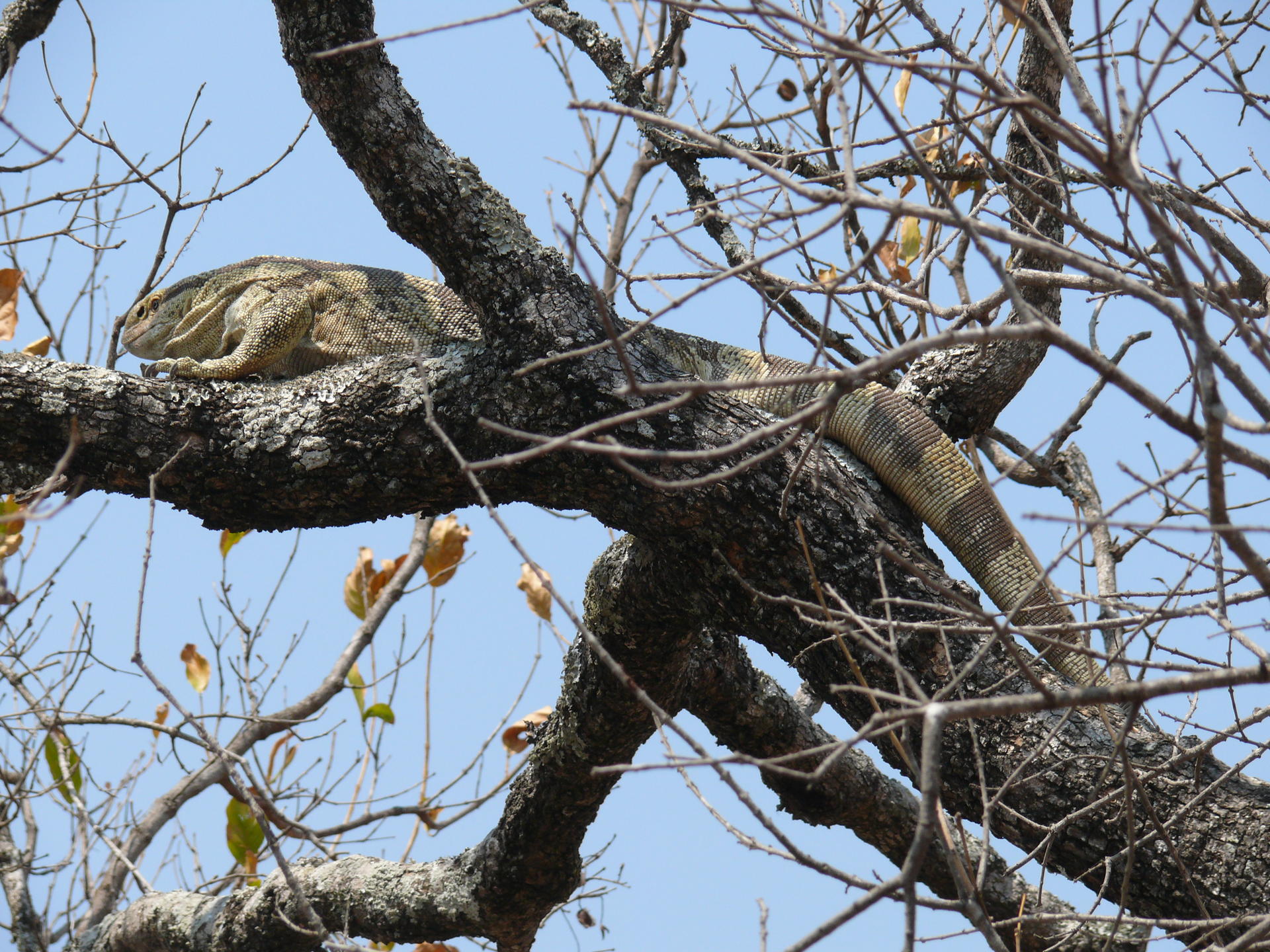 AfricaHunting.com said:
... If you did not kill him that day, you or someone else would have had a really good chance of encountering it again ...
Click to expand...

My view of all poisonous critters -- snakes, spiders, scorpions. And to those who say that the poisonous ones have their place, I counter that there are enough non-poisonous ones to fill the void.

Nyati said:
A kind of reptiles fascinate me, but i do keep my distance.

I can handle the lizards. Great picture.
T

I've just returned from Zimbabwe, a midday as we sat in the dining tent, this snake was slithering 4 meters past where we sat. My Ph called it an Egyptian cobra, but afterwards I have seen pictures on the internet of snakes and it did not look like a cobra, but more like a black mamba.. I quickly managed to get this photos.

We also came across this more pease full one..

The snake in the top pic does look a BM...and bottom pic ls as you say a much safer snake...lol....python/Boa i believe...
C

I am not a fan of snakes in the least, they scare the crap out of me to be honest. I was lucky not to encounter any poisonous snakes on my trip last August but we did come across this python who had fallen into a water tank. My PH's decided to rescue the snake, I argued but lost.

The snake was very cold and we were not sure if it was going to survive but when we came by where we laid it out it was gone so either something had a good meal or the snake recovered and went on it's way. 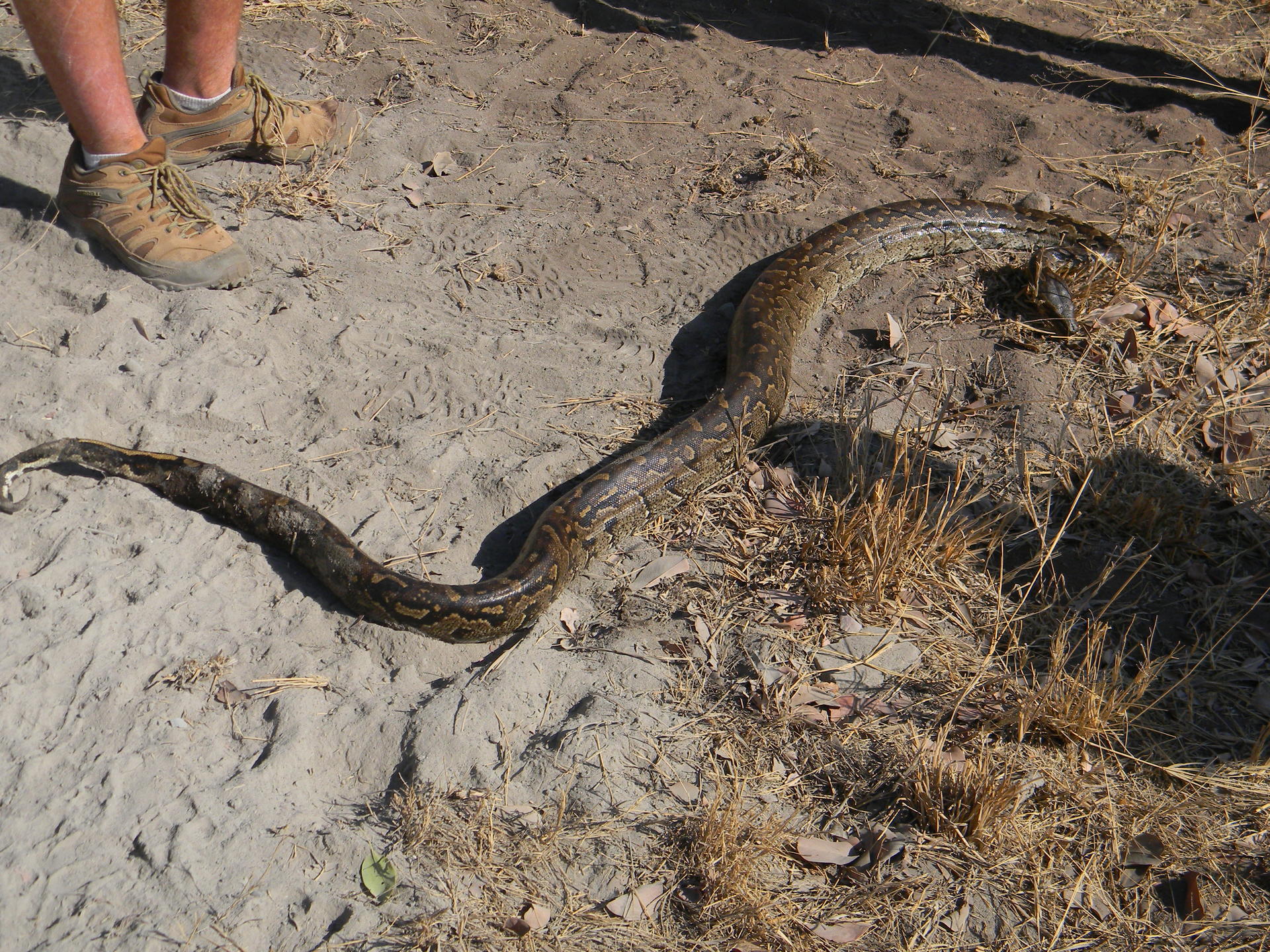 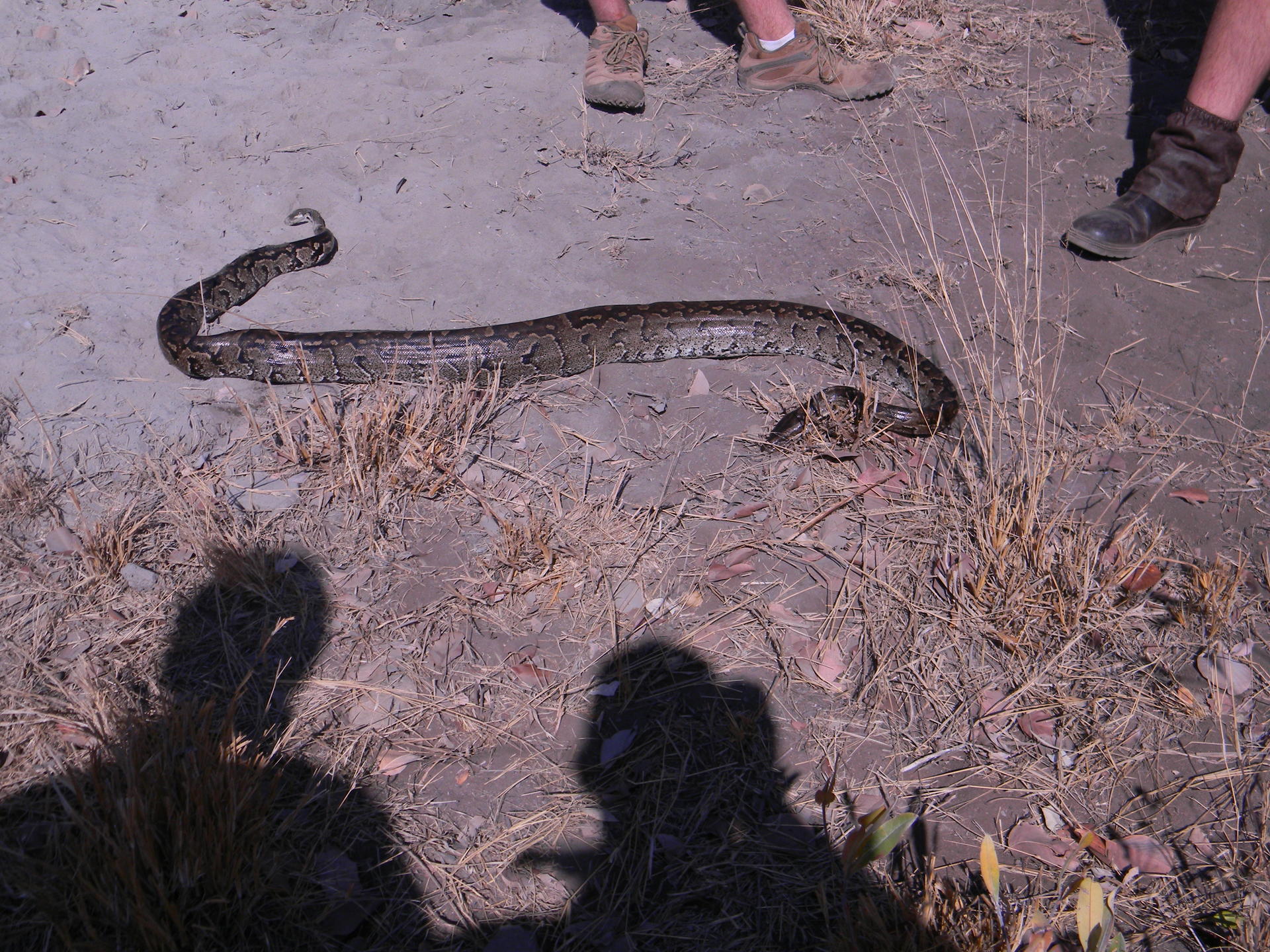 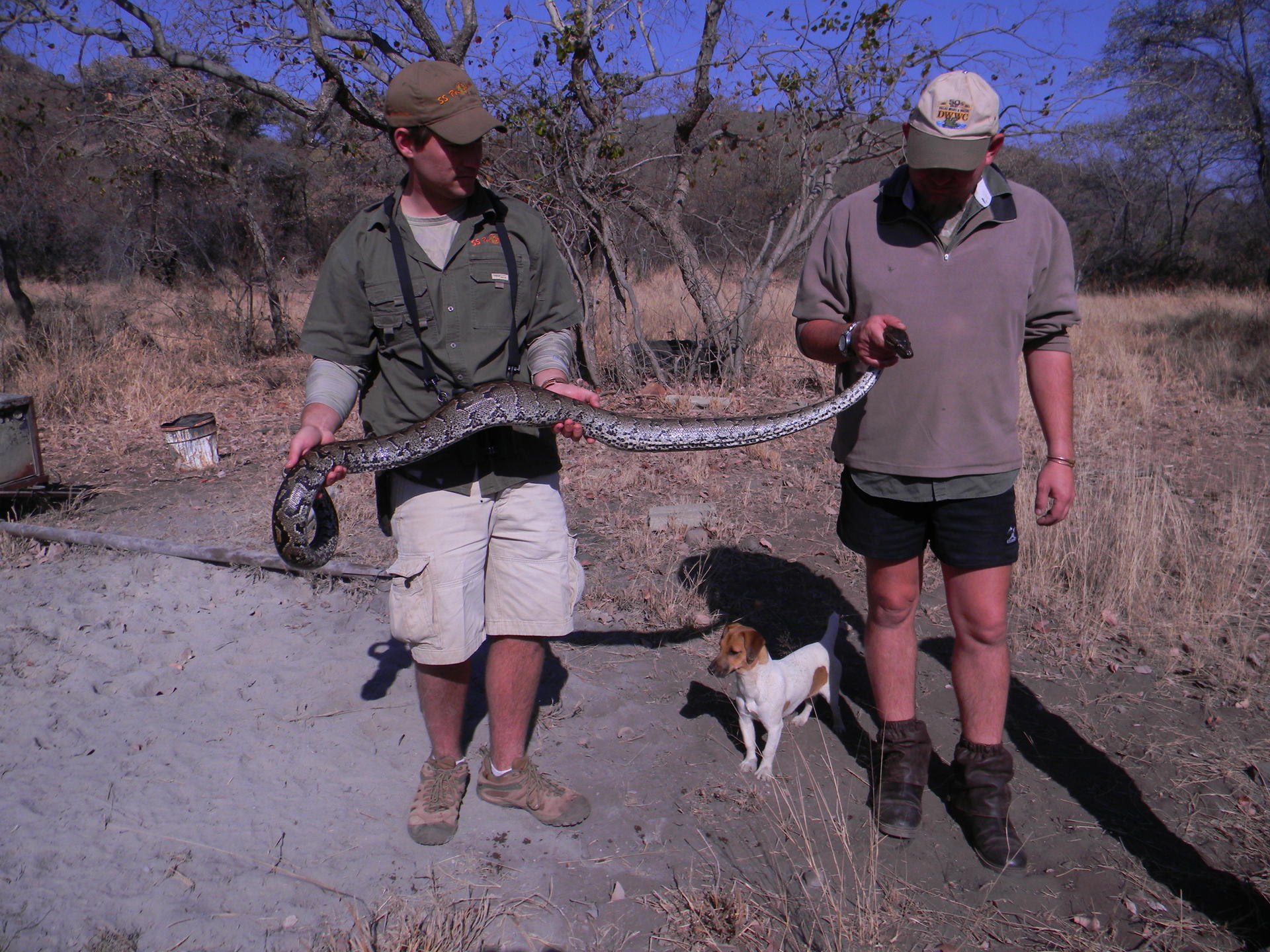 The mamba is an intimidating snake for sure, would not want to cross paths with one.
Last edited by a moderator: Mar 18, 2020

I dont mind snakes at all, although thats easy to say when there is 3 feet of snow outside lol. The only thing that really gets to me is the creepy crawlers like big spiders.
Best Broadheads money can buy dirtnapgear.com, give em a dirt nap!

I hate black mambas. I got a real scare last year in Botswana. I'm all for conservation of all animals....just not mambas. This bastard came down from the roof of my bow blind and was swinging in the air just a foot and a half from my head. Thank god the PH Jason Bridger had his wits about him and shot it. Pretty scary stuff when you have a wife and twin two year old boys at home. 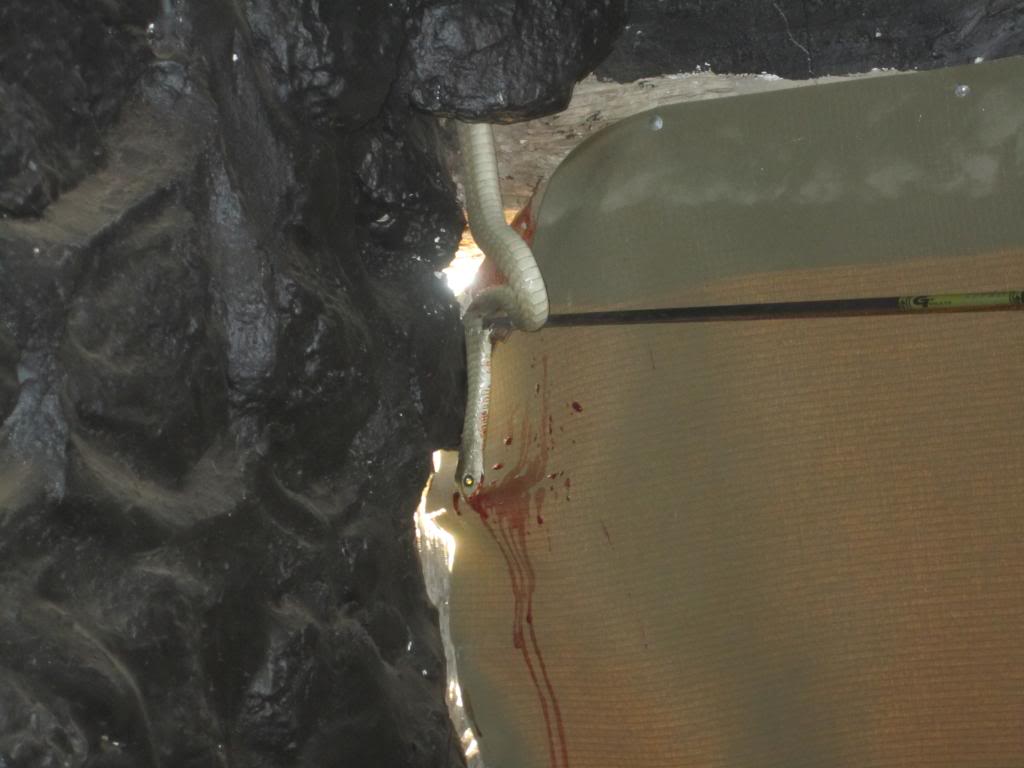 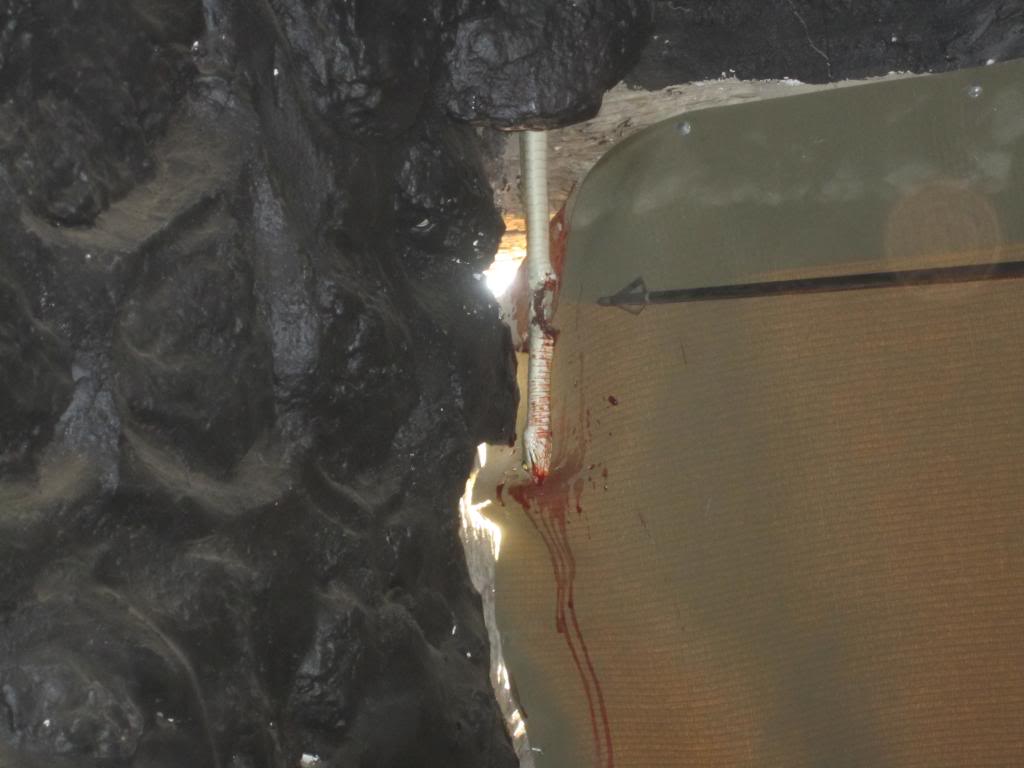 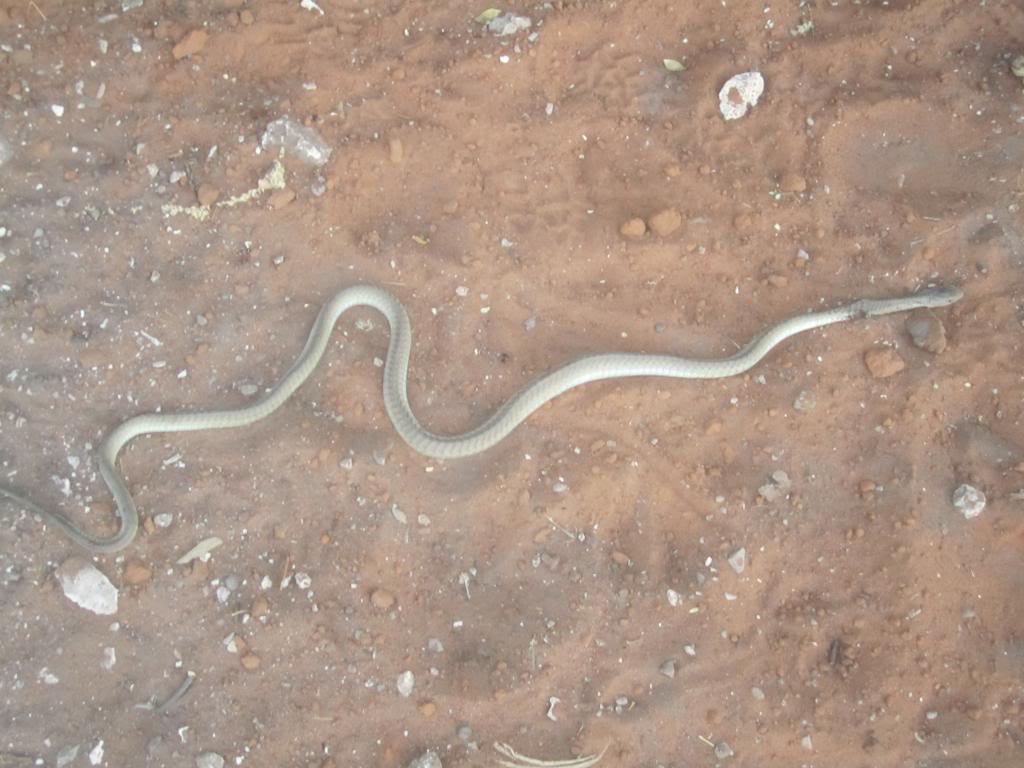 Bet that made for dirty shorts Tom!

While on our hunt in Namibia this last september, we were walking a dry river bed. Our PH told us to stop, and move to the right. I thought he had put us on the game , what he pointed out to us was a long stick in the middle of the river bed. Turned out it wasnt a "stick" but a six foot zebra cobra. It was about 20 feet from us, it reared up and fanned its head, then slithered in reverse all the while keeping an eye on us. 45 minutes later, on our walk back the cobra had made a kill of a mole snake. It was ready to eat it but spotted us and slithered backwards uo a rock wall. I thought I had seen a lot of things, but I didnt know snakes had reverse let alone could climb walls backwards!!!! Beautiful animals, but terrifying when you realize your in the aquarium with them!!! 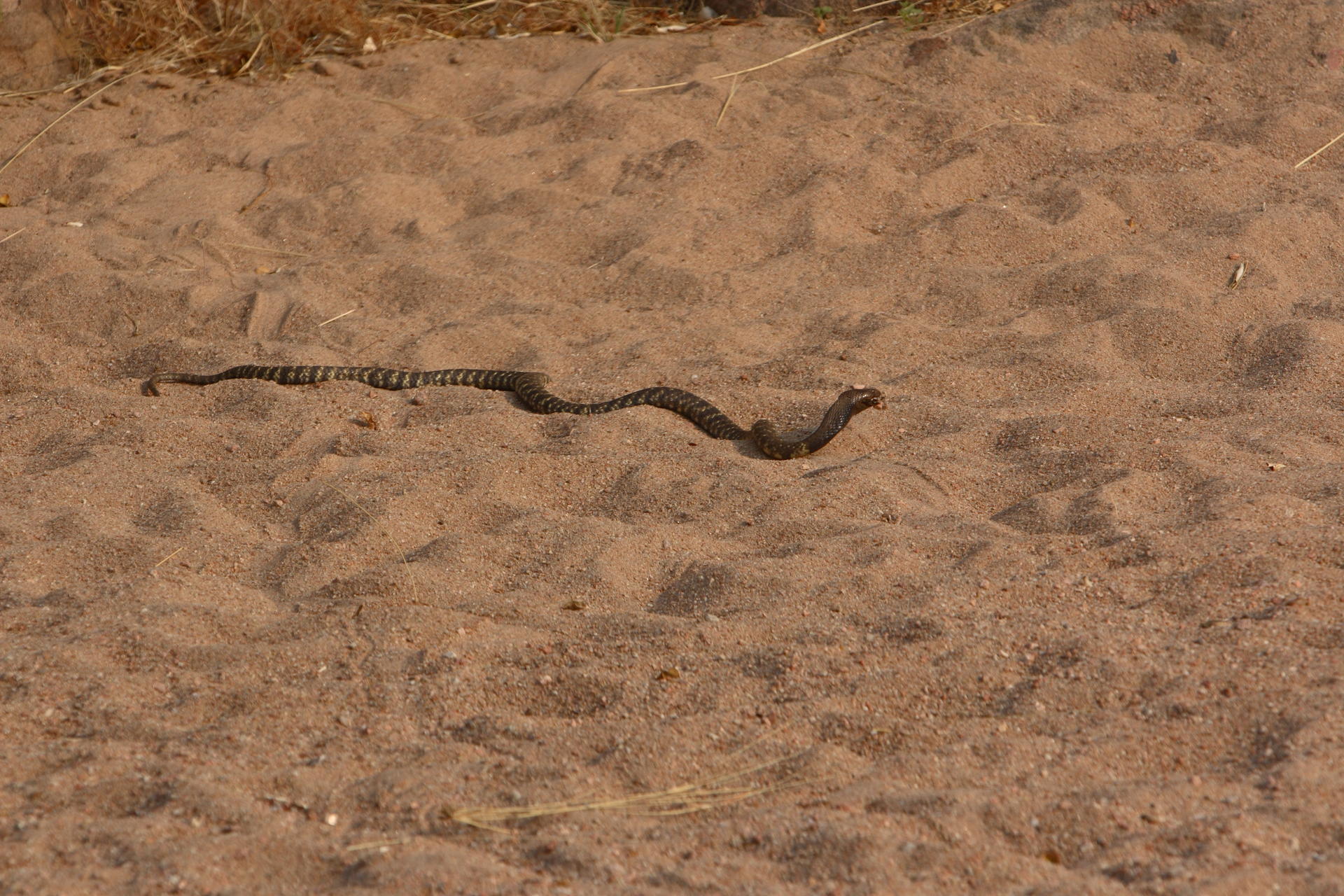 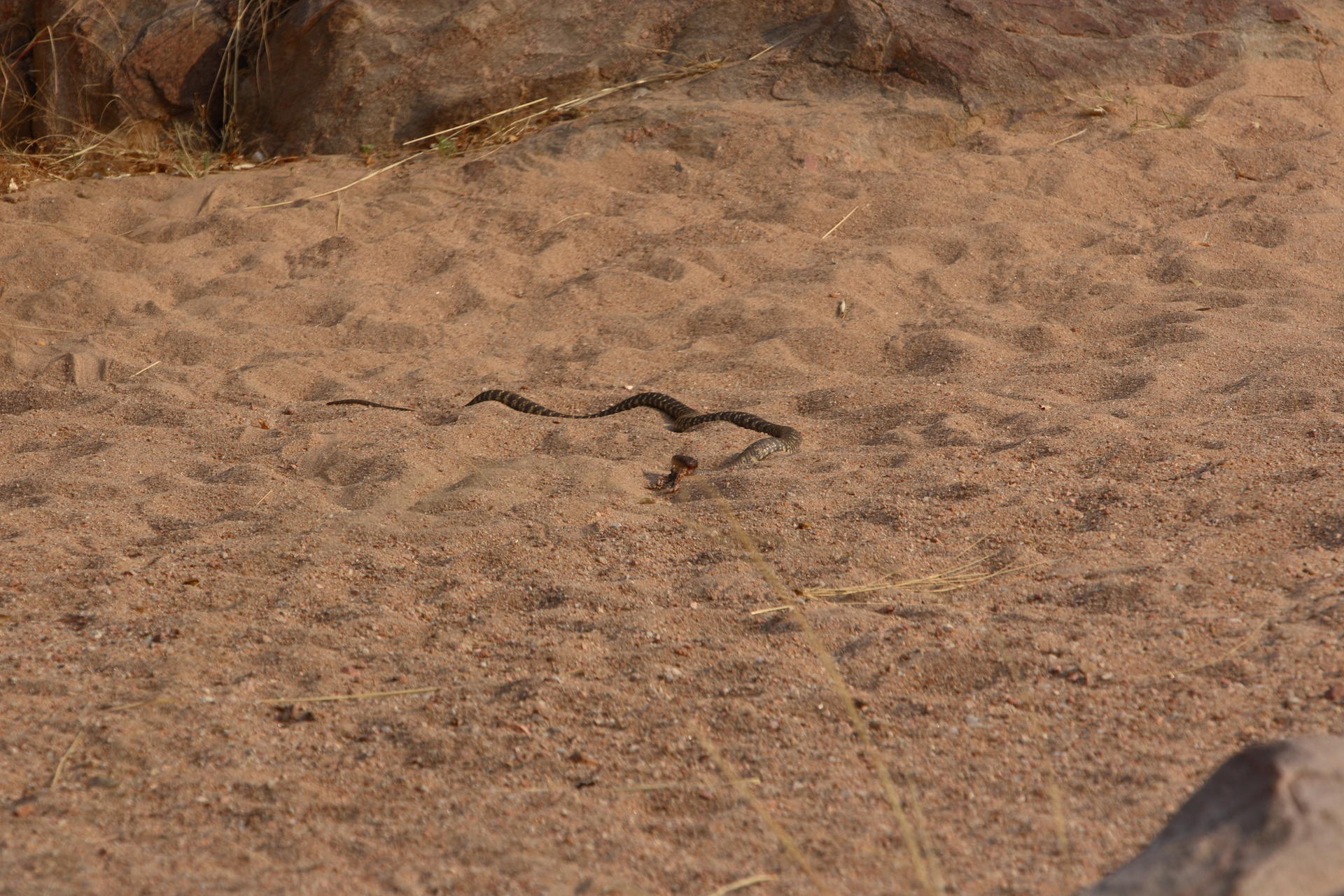 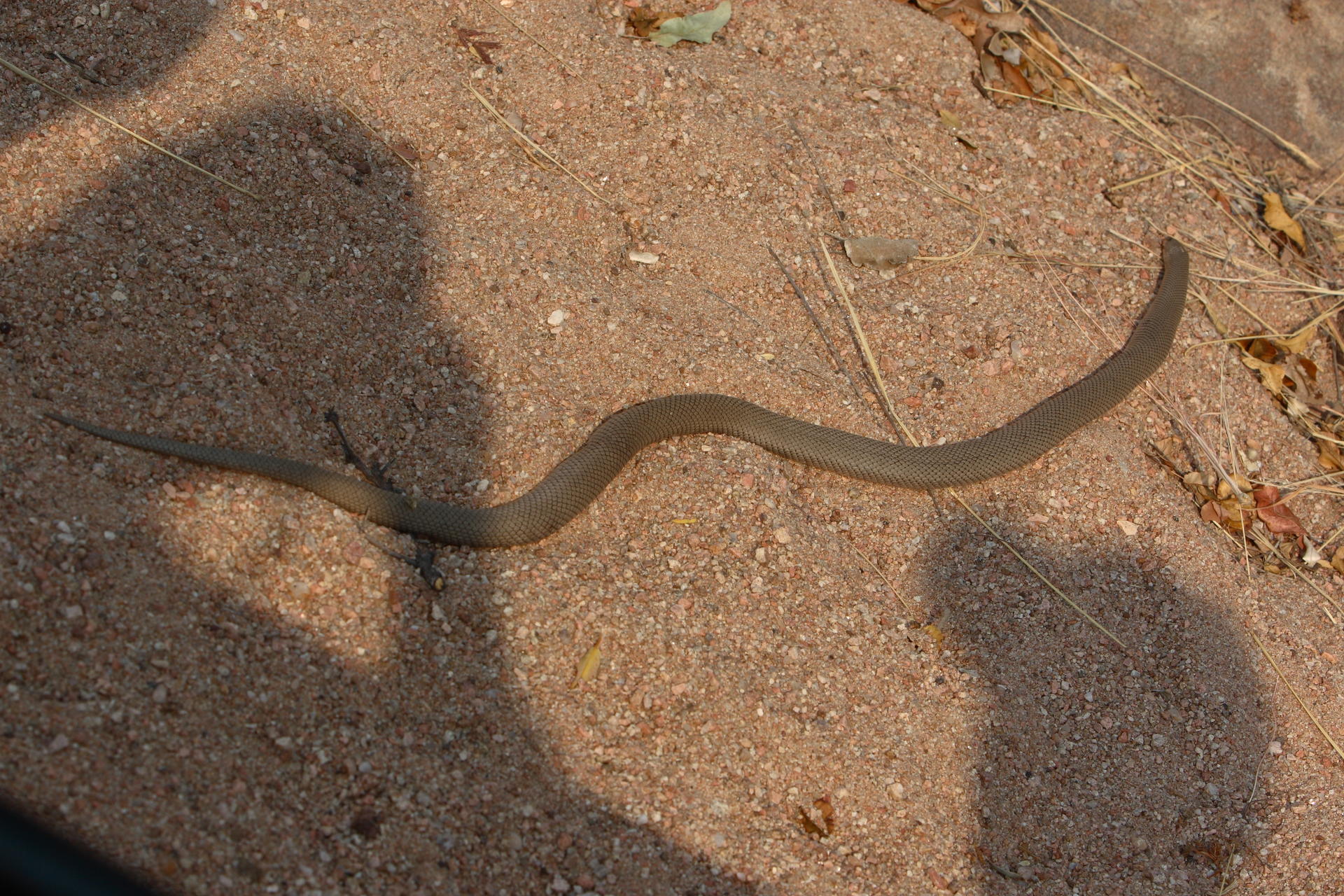 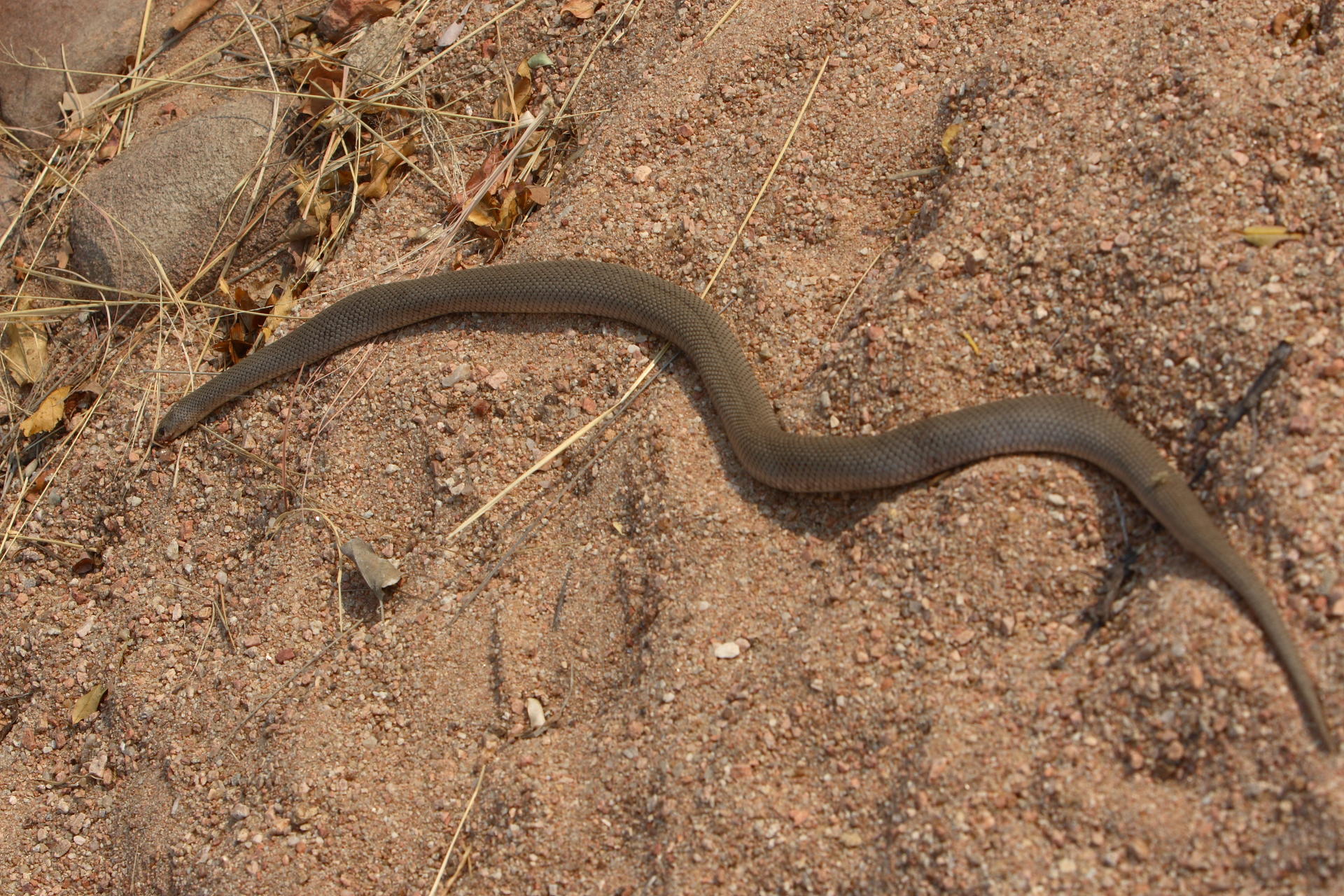 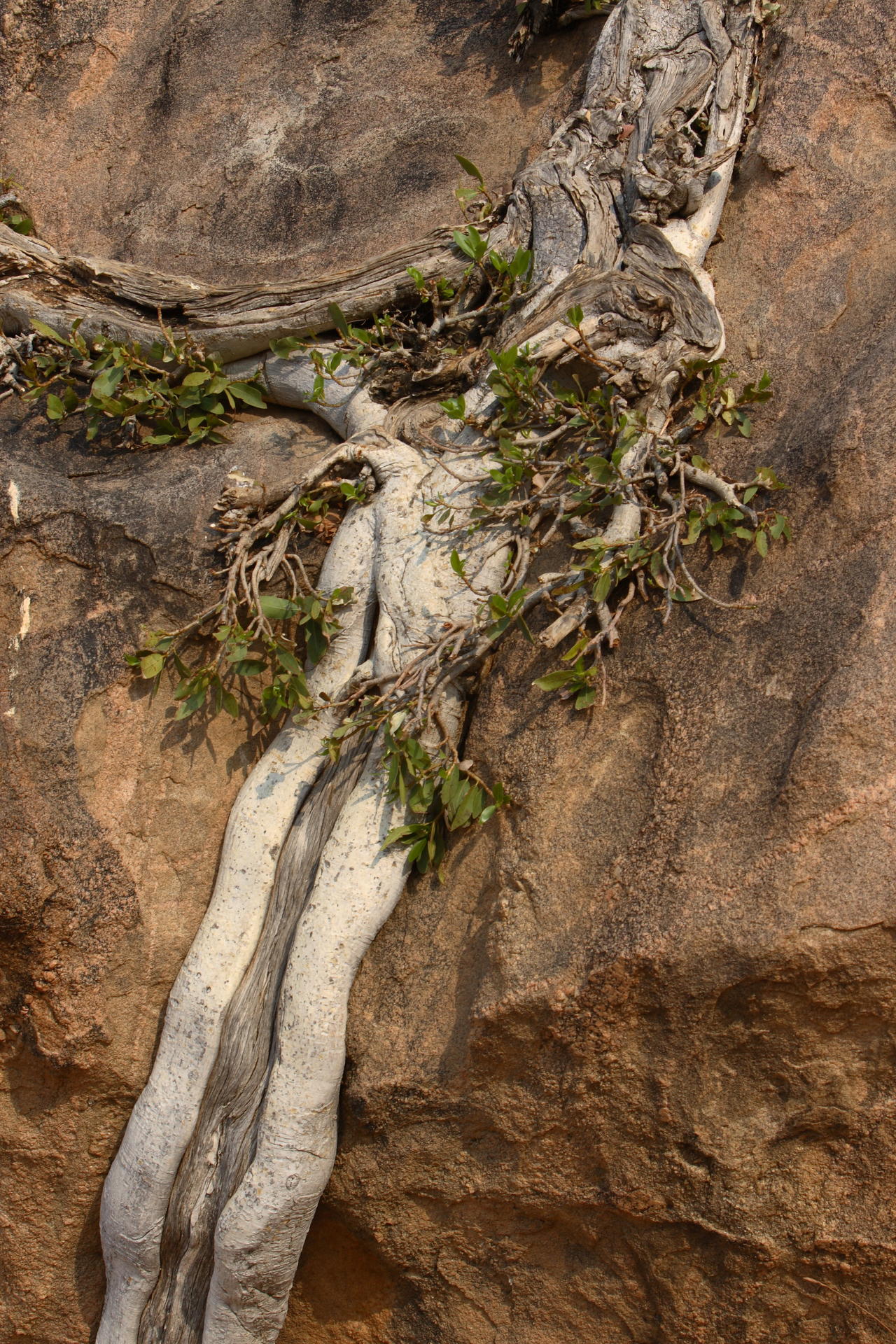 Last edited by a moderator: Apr 28, 2014
Jerome Philippe, Founder of AfricaHunting.com
You must log in or register to reply here.

How often is the Black Mamba encountered?
2 3