Thinking of hunting the Dangerous Game of Africa? Maybe you should add bushbuck to the list.
Saw this article on facebook this morning, thought you'd like to have a little read.
Hope it pastes ok from the website. 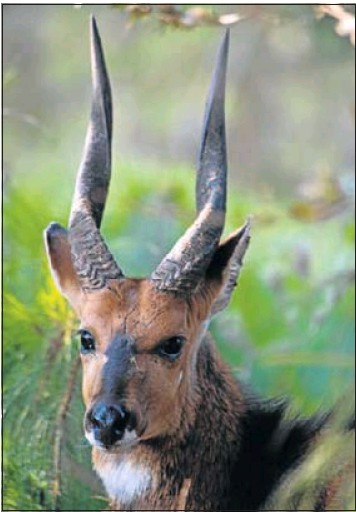 Real Danger: When concerned, a bushbuck will often attack


A Uitenhage farmer’s attempt to save his dogs’ lives eventually cost him his own, when the wild bushbuck attacking his pets turned on him.

Jimmy Robinson, 70, died in the Cuyler Hospital in Uitenhage on Monday after battling with his injuries for more than 10 days.

He was injured in what family members called a “freak accident” when he found a bushbuck ram in his yard and was stabbed twice by the antelope’s sharp horns.

His daughter, Carina Muller, who lives on the same farm, said they were stunned by the incident that happened in the blink of an eye.

“It was already dark outside, past 8pm, when my father heard a noise. He came out to find one of his Jack Russells limping to the front door, and the other still barking at a bushbuck on the lawn around the house,” she said.

The bushbuck had stabbed the fleeing dog in the hind leg and gave the other a cut along the stomach.
Last edited by a moderator: Jan 31, 2015
S

Inclusion of lion, leopard, cape buffalo, black rhino and African elephant as the dangerous "Big Five" is clearly arbitrary. Given the right [or wrong] situations they can be deadly but so can many other species. I've been charged by a lion but I've also been charged by a range bull that was born on my ranch but never corralled or 'tamed'. Recently, because of rank carelessness, I was almost skewered in the gut by a small whitetail buck that I thought was 98% finished. Wrong. Most of the charges I've witnessed or personally sustained are from feral hogs--sows with small piglets and wounded boars. Then again, I've hunted and been in the presence of hundreds of feral hogs but only a few of the 'Big Five.'

Bushbuck have a bad reputation for attack when cornered or wounded but, because they are small with small horns, don't get the respect they clearly deserve. Recently I was present when a friend was 'charged' and injured by that bushbuck relative, a common nyala. The buck had been raised in captivity but released into the veldt on adulthood. Fortunately, the owner had the foresight to cut off the tips of its horns but this may have been to save the animal from trophy hunters. The stiff-legged approach was one of pure territoriality and didn't seem dangerous until the animal suddenly 'charged' from a range of only a few feet. The nyala seemed to regard us as other nyala encroaching on its territory.

What was that guy thinking? We'll never know.
That 375 might not be a bad idea with these guys.
D

Any animal especially when cornered and wounded can be dangerous, even a raccoon for example. And it's pretty small compared to a bushbuck or any other big game for that matter.

Animals with horns can be dangerous, however small they maybe. A 10" horn or so may not seem very big but it can do a lot of damage to a human body if it hits it in the wrong place. Ie to penetrate into the heart only takes a few inches.

Also remember what happened to the crocodile Steve Irwing he got stabbed in the heart by a fairly small stingray and died more or less instantly. This is a man who wrestled crocodiles, snakes etc... and other very dangerous animals. Now a stingray stabbing you in and off itself probably won't kill you and your chances of survival are quite high, because most of the wounds are in the leg, foot etc... And the barb itself isn't very big either.
S

Kind of makes you wonder why only elephant, black rhino, lion, cape buffalo and leopard were the only ones to make it on to the "Big Five". Why not have a "Big 7" or "Big 10"? Sure, most of the 5 are very good sized but a leopard, arguably the most dangerous of all, doesn't even get as big as a mountain lion. Maybe it's because all five of these sometimes make a sustained charge from some distance. Then again, what about adding the hippo? And why did some safari groups decide to include the white rhino? It's big enough, to be certain, but so is a giraffe--and a giraffe is certainly capable of messing you up. Yes, white rhinos have caused a number of deaths but usually to hikers in game parks who got way too close. Ordinarily the white rhino--as opposed to the smaller black rhino--is a fairly inoffensive beast that likes to mind its own business.

Gee, it looks like one of my all-time favorite animals to hunt is gaining some additional respect here lately due to a couple of recent and unfortunate incidents . . . . . . although the bushbuck has long been known to be an aggressive little critter when cornered or wounded.
There are many degrees of wounded . . . there is only one degree of dead

spoonieduck said:
Kind of makes you wonder why only elephant, black rhino, lion, cape buffalo and leopard were the only ones to make it on to the "Big Five". Why not have a "Big 7" or "Big 10"? Sure, most of the 5 are very good sized but a leopard, arguably the most dangerous of all, doesn't even get as big as a mountain lion. Maybe it's because all five of these sometimes make a sustained charge from some distance. Then again, what about adding the hippo? And why did some safari groups decide to include the white rhino? It's big enough, to be certain, but so is a giraffe--and a giraffe is certainly capable of messing you up. Yes, white rhinos have caused a number of deaths but usually to hikers in game parks who got way too close. Ordinarily the white rhino--as opposed to the smaller black rhino--is a fairly inoffensive beast that likes to mind its own business.
Click to expand...

Hippos and crocs account for a lot of human deaths in Africa, with hippos killing more people per year than any other big game animal according to some statistics I've read. They are part of the "big 7" but since hippos are usually brained while in the water (now a hunt for hippos on land raiding crops for example is a whole other animal and quite dangerous) and crocs are also usually brained while laying on the river banks they might not be as dangerous to hunt due to this style of hunting even though they are very dangerous to say people who wash their clothes on the river banks or go out in the river in dug out canoes to fish and so forth.

Also if I am not mistaken leopards are known as the maulers or torturers because they inflict many excruciating wounds but people do survive. Your odds are probably better of surviving an attack by a leopard than any of the others.
S

True but leopards are plenty dangerous. A friend of mine was killed by a leopard caught in a leg hold trap. He told me that he had a leopard killing his goats and that he "can't live with a leopard." Being a sometime trapper myself, I asked him about technique. He told me that it was "unwise to stake a trap down because a leopard is such a powerful beast that will simply pull its foot out." "Therefore," he told me, "it is necessary to put the trap on a drag." He told me that if the trap was gone and the ground torn up he'd track the leopard down to where it could be expected to lay up amongst the boulders. "You finish it with a shotgun?" I asked. "No way," he told me. "A leopard skin is valuable. I shoot him in the eye with a .22. Of course", he continued "my neighbor--a black man--was killed trying to do the same thing with a spear." Evidently my friend was following his own advice the day he was killed. I'm guessing here but suspect that my friend was following the drag with head down, his eyes concentrating on the spoor. He probably walked right by the leopard at a range of only a few feet. Unlike an untrapped leopard that would have probably struck and run, the animal was still crouched on the body 2 hours later.

Several years ago I was at an acquaintance's house in the Free State. Using dogs, he had captured a live leopard a couple of days earlier. He held it in a cage that was maybe 60 feet wide. I waited until the leopard was on the other side of the cage and then crouched as if I held a shotgun at the ready [outside the cage, of course]. I wanted to see if I could "beat" the leopard. I couldn't. I tried the experiment several times but always with the same results. The leopard was always in my face before I could lift my make-believe shotgun and fire. Fast.

Still, professional hunters kill wounded leopards fairly often and usually without injury. Most of the old, wise PHs will call for back up. My thought is that the key word here is "wounded." An intact leopard is tough to beat.

And speaking of "small" game with dangerous potential--I've trapped a number of bobcats in leg hold traps. Three of them charged me only to be brought up sharp and sudden at the end of the chain. If the leg of even one of them had pulled out, I'd need serious plastic surgery. Then again, it might have been an improvement.
You must log in or register to reply here.

My Lechwe and Bushbuck hunt

The Most Dangerous of Them All