175 gr RN. Like in the blue box Federal Power Shock SP...thought those were a good match for loads of the 40's and 50's only less velocity. They just do not group well. THey do seem quite a bit longer than the SSTs. At least in terms of COAL.
Z

Fair enough. Proof is in the shooting. Might be worth checking the twist rate. Guides can slip on cut rifling machines, resulting in slower twist rates. According to Roy Dunlap, that happened at Springfield Armory prior to WW1. They only noticed because the 150gr service ammo shot much better than average when the rifles with barrels from that machine were tested for accuracy, prior to crating up.
A good shot at close range beats a 'hit' at a longer range.

Good point. I was actually going to check the twist. But in the end it does not matter. I'm keeping it original for now, so no re-barelling. It will shoot what it will shoot. If it does not shoot anything else but the 139s, it may get sold or re-barelled or be kept as such. I'm sure 175s can be kept on hand for any shooting needed under 100m.
Z

Makes sense. I know a guy with a Smith & Wesson 7x57 rifle built on a Howa action. It has a 1-11” twist and works well with 140gr spitzer flat-base bullets. Apparently the deer don’t know that you have to use a boat-tail projectile.
A good shot at close range beats a 'hit' at a longer range.
B

8.66" twist will more than handle berger 180 gn vld bullets, which 9"twist will handle, so 175 gn bullets should be nicely stable, even the 175 gn sierra boattail hunting bullet.
bruce.

I picked up 100 hornady 139gr interlocks a few months back when cabelas had them on sale just to see how they would do.. they group extremely tight.. and might be my go to projectile for whitetail and hogs in TX this year (super cheap, more than enough bullet for those animals.. and hard to beat a sub .5 MOA group out of the little rifle I am shooting)..

I like Hornady bullets for their consistency and good flight. But I'm not familiar with their hunting bullets much. To be honest I don't think the twist is the issue in my case as it did not shoot other 140 gr bullets well. Rifling is good too, so it might be one of those barrels. Though coming from Brno, those always shot well and actually very well with Federal factory ammo I have found throughout the years. ....But, I have couple more rifles like this. I have one 8 mm and one .300 WM that just won't shoot anything factory well. Old barrel on the 8 mm but throat and rifling look good...it just won't shoot. If a hand load will not work, it's getting sold or getting a new barrel. The 300 WM shot well initially but it has a pencil barrel so anything over 3 shots does not make sense. While I reload, I don't have much time for that and I do not have any loads worked up for any of these yet. I also like to have rifles that shoot commonly available ammo well enough, so I don't have to worry about being stocked up. Then again, for hunting, one does not need that many rounds in reserve. But as I get older, I lean towards that "only accurate rifles are interesting" and find even a nice rifle that throws a 3" group at 100 m unappealing. I like factory rifles that shoot 1/2" - 3/4" groups from the box (Brnos used to do that easily, Tikkas seem to be able to do that, have a Remington Mil Spec that shoots bug eyes). Then you can play with hand-loads to try and get them all in one hole or get bug eyes, but at least you know the off-the shelf ammo is more than good enough for hunting. Nowdays I do not find the hunting ammo as consistent...or maybe I have gotten so much older, shaky and just worse. So it could all be just me.

There are two 7x57 rifles in my battery.

A Ruger No.1 and a Mannlicher-Schoenauer GK.

Come close and have a deliberated shot.....and never lost an animal.

HWL
Relying on Mauser M98,.... but having an ever lasting love affair with Mannlicher-Schoenauers....
H 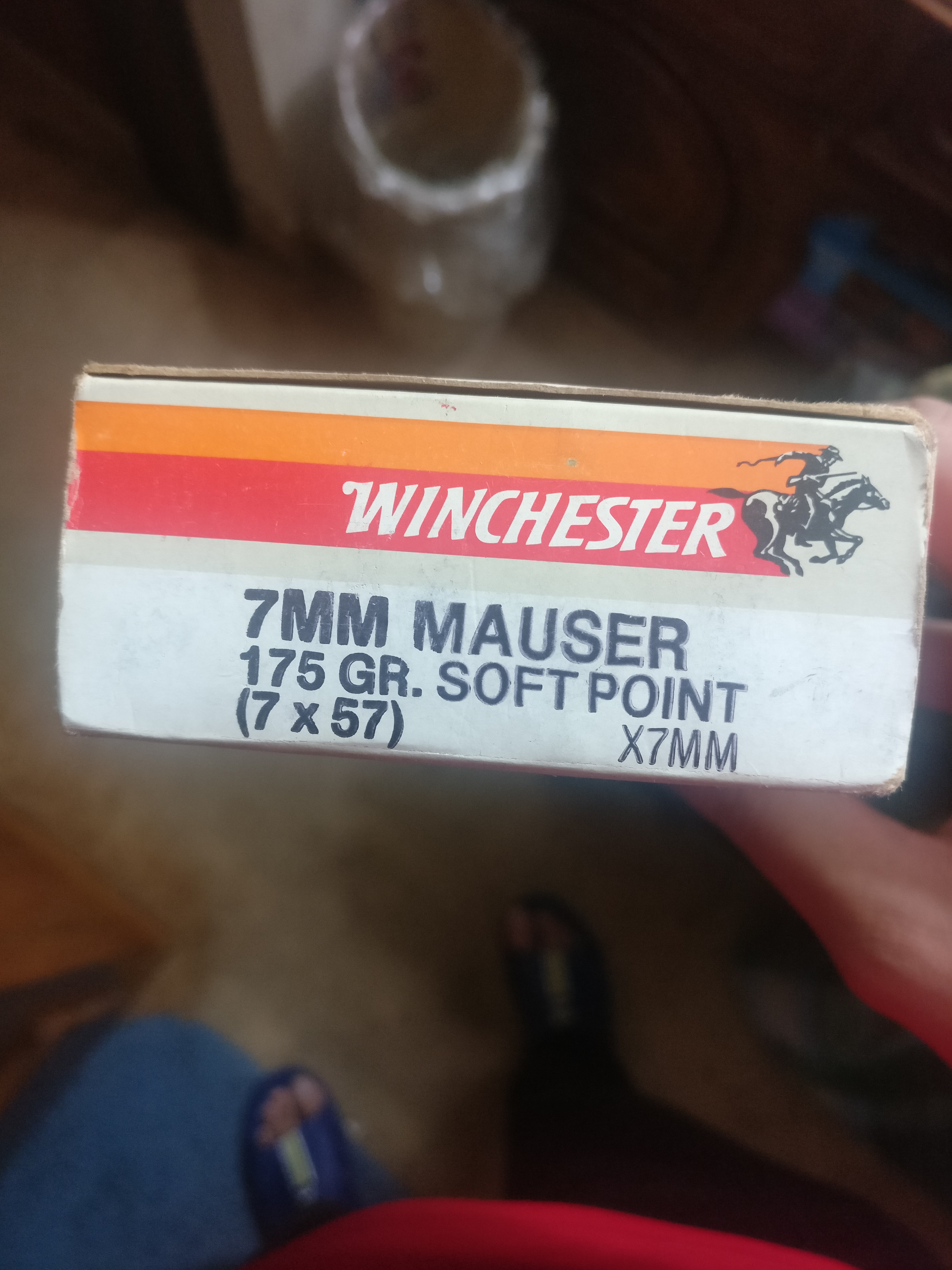 I made a mistake . Went shooting with the Father in law today. He uses the 175 grainers , not 173 as l previously said.

Myself and a friend took our Rigby’s to Namibia recently. He was using Federal 140 grain factory loads. I was using 175gr Nosler Partitions over 40grs of H414. Not an overly fast load but it was accurate.
Both loads did the business. We hunted warthog, oryx, waterbuck, blue Wildebeest, kudu , impala and eland. Ranges were from very close and exciting to out to 220 meters 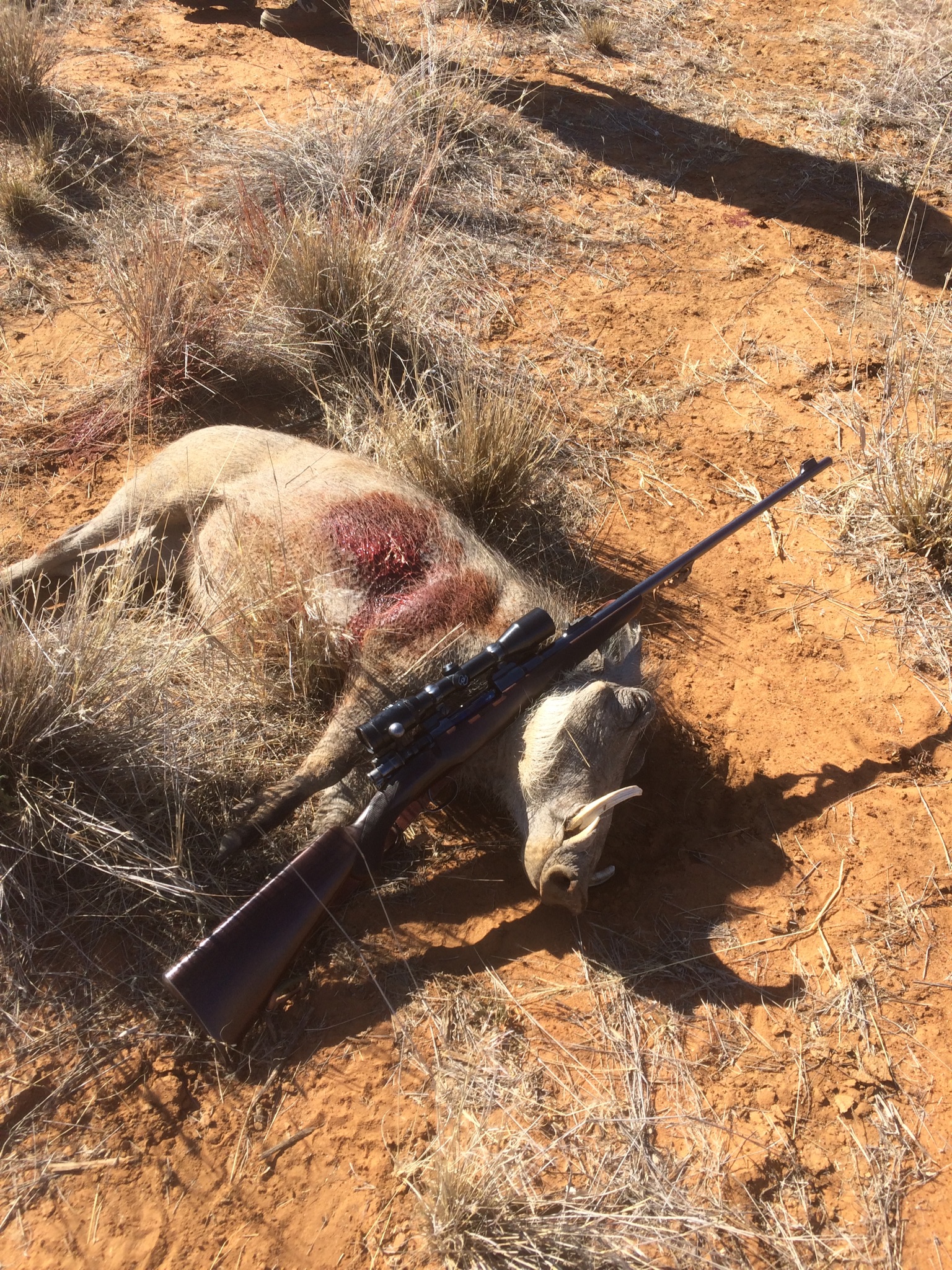 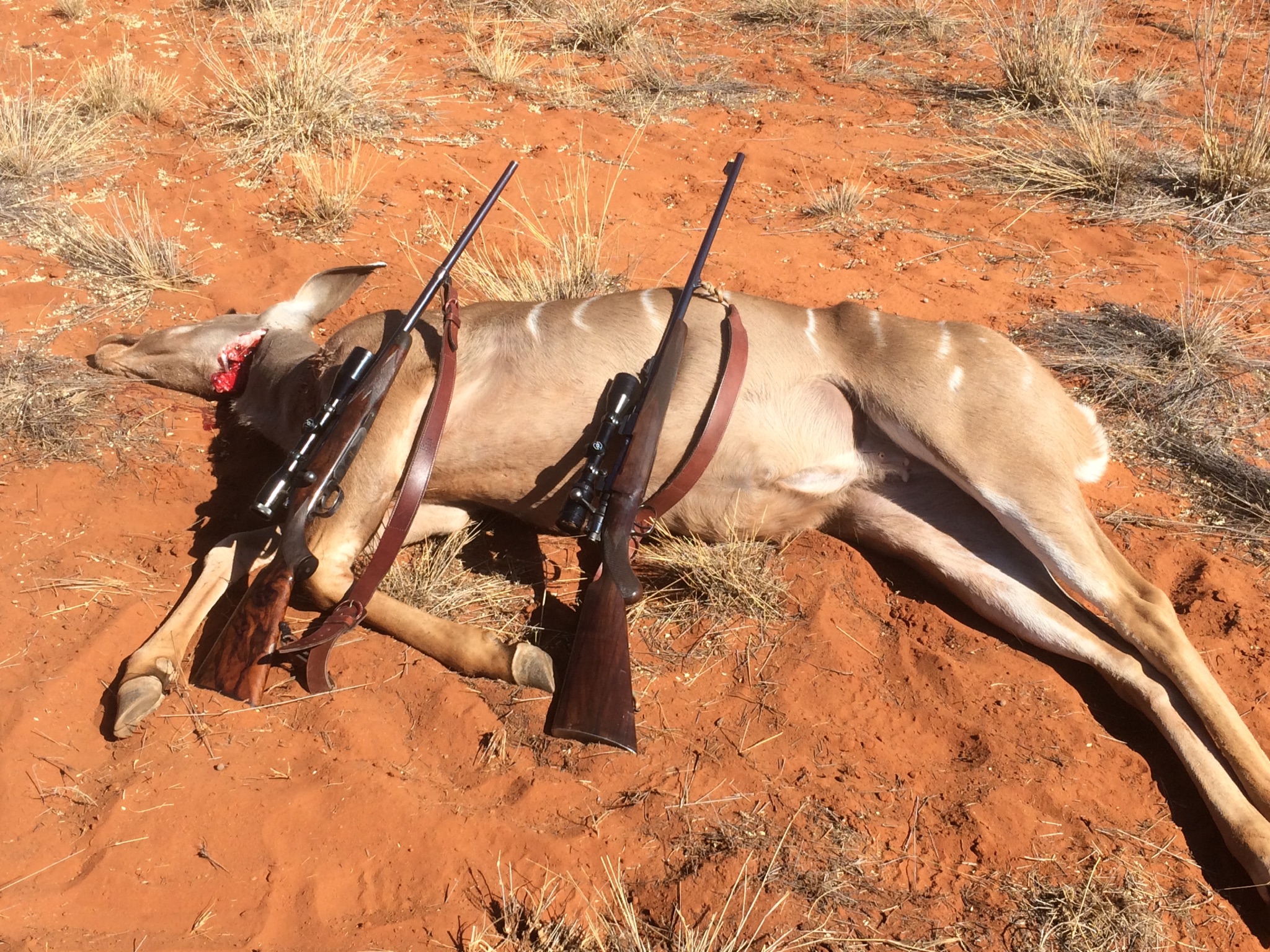 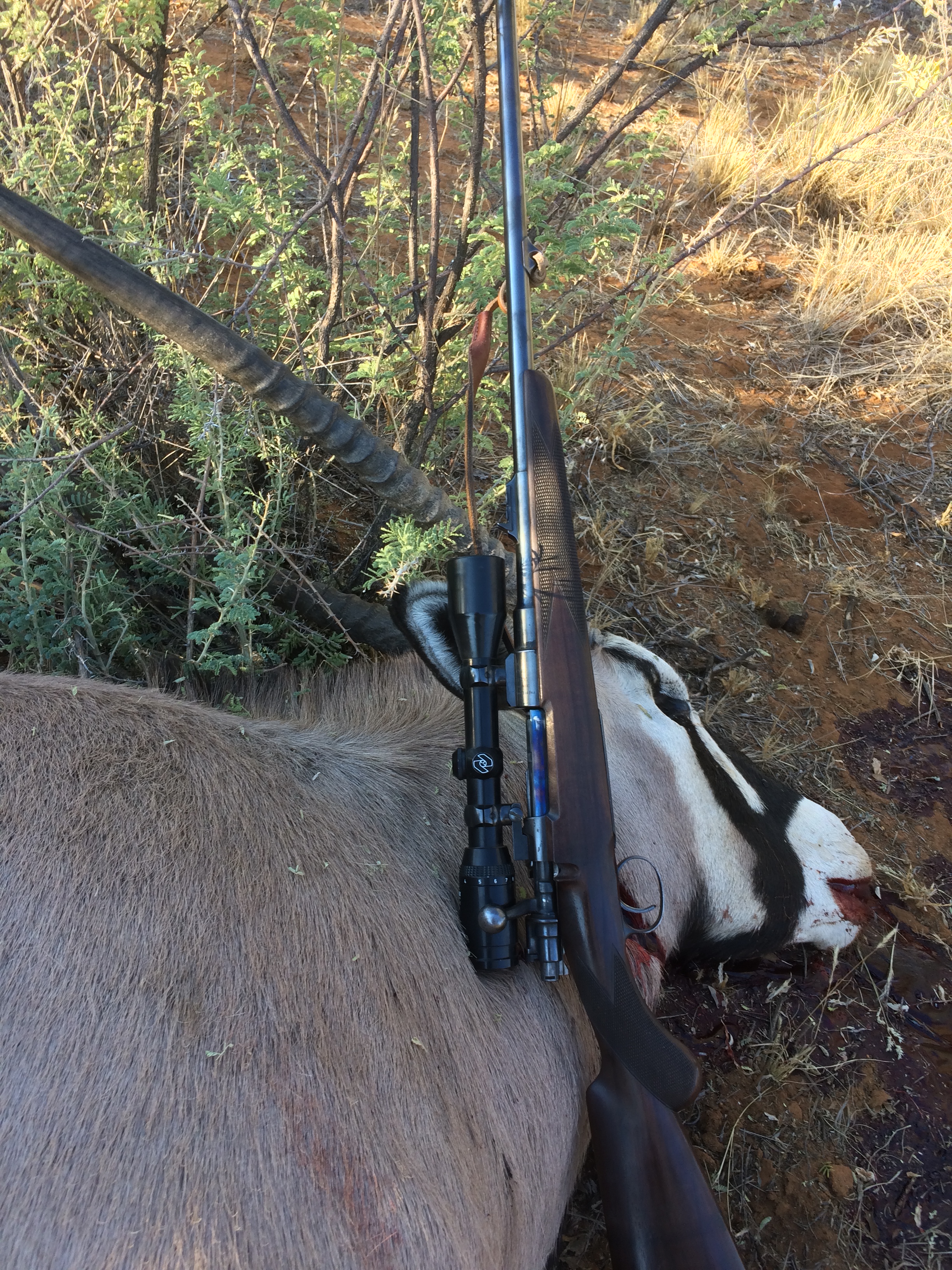 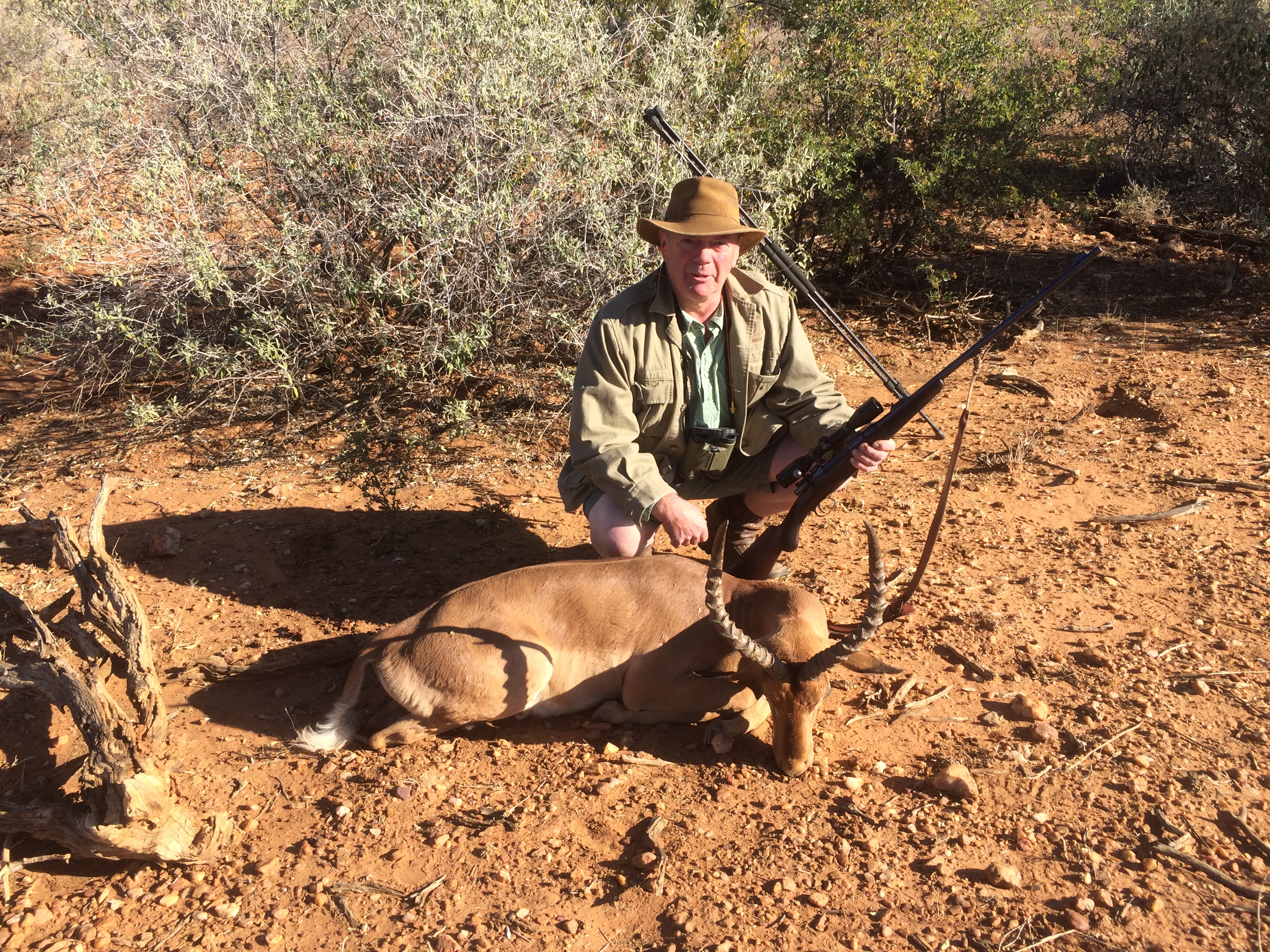 Hoss Delgado said:
View attachment 291824 I made a mistake . Went shooting with the Father in law today. He uses the 175 grainers , not 173 as l previously said.
Click to expand...

Yes. Too bad on the RN bullets. I wish there we more choices in that area.

Meant 156 grain Norma Oryx 7X57 factory ammo, not 165. I've never been an ace typist.
When the student is ready, the teacher will appear.

I really want to recover an oryx out of my 275 Rigby but they just keep passing through (and killing things quick). One day I'm sure I will.

sestoppelman said:
There is both Fed 175 and S&B at Grafs online. The S&B is their 173 gr with the step and its a good shooting bullet. I may try some in my soon to arrive new 7x57 rifle...
Click to expand...

G&S will not ship to Canada. It is now nearly impossible to get controlled items out of the US. And when possible the export permit fee is cost prohibitive.

That's too bad. I noticed buying some scope bases and rings off ebay tonight I got the "restricted item" notice! Like wow, I am going to ship them to some terror turd in the sandbox right? Stupid.

sestoppelman said:
That's too bad. I noticed buying some scope bases and rings off ebay tonight I got the "restricted item" notice! Like wow, I am going to ship them to some terror turd in the sandbox right? Stupid.
Click to expand...

Yup dumb. But I never know if it is just more way to tax people or to protect local markets or more gun control. Probably all together but I hate politics, so let's keep it 7x57 only.
You must log in or register to reply here.
Share:
Facebook Twitter Reddit Pinterest Tumblr WhatsApp Email Link