404 Jeffery Lee Crimp Die - Want To Buy Or Even Rent

So would i! Should have done something about it when I ordered my .404J - over a year ago. Now Lee tells me that they are too busy and have no idea when they might be able to produce one for me. Or anyone else.
4

During normal times Lee has many special run non cataloged Factory Crimp Dies on their website. I've picked up a few for odd ball calibers over the years. Just FYI
R

Maybe if we get enough people they will do a run?
R 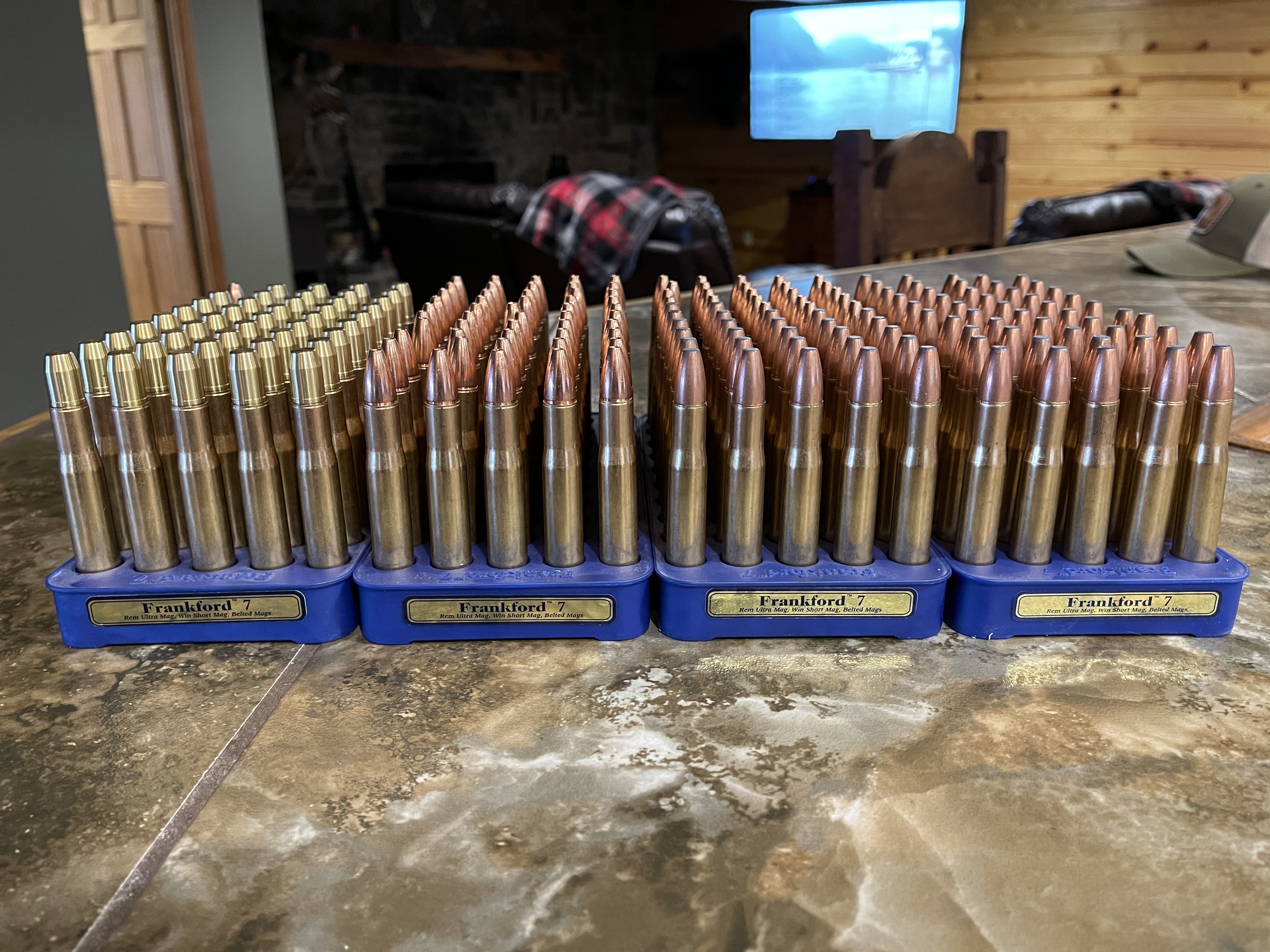 I loaded up enough the other day to last me for a few hunts!
4

Razorback said:
Maybe if we get enough people they will do a run?
Click to expand...

Groupbuy from someone else? Any ok machineshop can make this style of die.

Sans a Lee FCD anytime soon, the best alternative is use the roll crimp shoulder in the bullet seating die. @Wyatt Smith 's system makes sense. To maintain seating die settings, possibly get another 404 seating die, remove the seating stem and dedicate it to crimping only. But still, any crimp, especially a roll crimp, is pretty much limited to use with some form of groove. Attempting to roll crimp into a smooth shank usually succeeds only in reducing neck tension.

It might be a good idea to have a machine shop make one, but I'm afraid it would be cost prohibitive. A FCD would not be the easiest thing to make from scratch.
Last edited: Monday at 11:21 AM
N

GuttormG said:
Group buy from someone else? Any ok machineshop can make this style of die.
Click to expand...

Does anyone have a dimensioned drawing for the Lee .404J FCD?

I get the feeling that this craziness is going to continue for quite a while, and there may be political moves that make it even more difficult.

For those of you with machining experience; lets see if there is another way to skin this cat without completely high jacking the OP thread, but I think he might be interested too.

With Lee being out of the custom die game for an undetermined amount of time; I am wondering if it would be possible to have a machine shop modify an existing .416 Rigby factory crimp die? Can someone on the forum with machining experience tell me if I'm onto something and how...

fourfive8 said:
It might be a good idea to have a machine shop make one, but I'm afraid it would be cost prohibitive. A FCD would not be the easiest thing to make from scratch.
Click to expand...

I actually was kicking around making one this morning when I was out in the shop casting bullets. The collet is the part that's is going to be time consuming. I usually prototype on my hand crank lathe and mill before taking it to my friend's machine shop to be duplicated on the CNC. I've prototyped Stith style no drill scope mounts for Savage 99's, no drill sight mount brackets for Whitworth reproduction muzzleloaders, and a no drill scope mount for Winchester M71's. I just don't think I could do it reasonable enough price wise.
S

Am I being dumb here but could you use modify something like a 44 rem mag FCD? 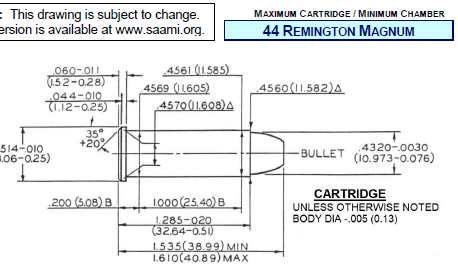 Scrumbag said:
Am I being dumb here but could you use modify something like a 44 rem mag FCD?

No, the Lee design works with the cartridge length to apply the crimp. The .44 Mag collet is too short.
Last edited by a moderator: Monday at 2:57 PM

457121 said:
No, the Lee design works with the cartridge length to apply the crimp. The .44 Mag collet is too short.
Click to expand...

Exactly!.... but the rigby is too long so it could be cut shorter and then the bullet diameter is only .007" off.
R

Wonder if you could use 416 rem collet in 300 RUM die? Both are available right now.

Similar subject of trying things from Down Under.....
I needed to pull lots of 416 Rigby ammo a few years back.. my hammer bullet puller didn't fit, so I noted a 375 crimp die would only just grab a 416 bullet. (Memory is fading, so facts might be out.??).. But here is the machine which spun together in seconds. A crimp die threaded upside down.. up into the press from the bottom.., and top press spun onto the protruding thread.
Bottom press fed the loaded 416 Rigby round up into Crimp die... then medium pushing up (i think) on top press lever caused press shaft down onto the crimp die base to make it grab hold of the projectile... Then up on lower press handle pulled the 416 case down and away from bullet. Thus a bullet puller machine.. lol.. Coordinating was comical at first, but it recall it worked perfect..
...
So.... just maybe... a 44 Rem Mag FCD inverted as such, could apply a crimp on a 404 Jeffery seated round..?? 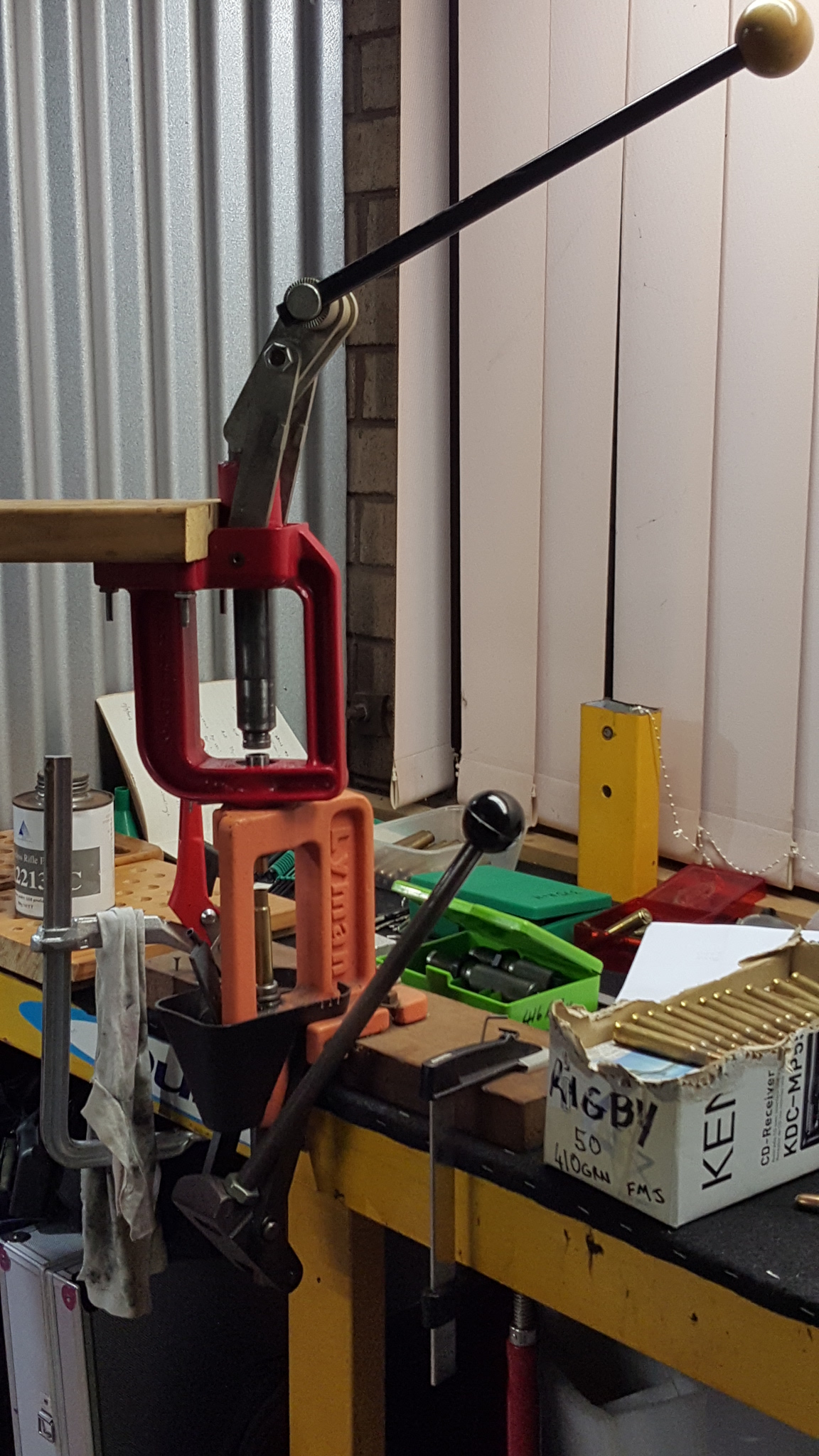 deewayne2003 said:
Exactly!.... but the rigby is too long so it could be cut shorter and then the bullet diameter is only .007" off
Click to expand...

I've never tried that combination but it might well work given the small neck diameter difference... at only .004-.007". The actual neck diameter difference will also depend somewhat on the brass thickness. I have modified FCDs for differences in length, but with the same neck diameters. But yes, it's possible, I think. I've reduced the length of the collet on a couple FCDs and it's fairly easy to do. Same theory but in "reverse" of adding spacer (washer) if FCD collet is too short... which also works.

The best way to shorten the collet is to pop the collet out of the die body with a brass rod. Then chuck the collet (finger end) in a lathe or even a large drill press will do. Minimize the runout... it doesn't have to be perfect but the closer to true the better of course. The collet is fairly hard so a diamond file might work but a small hand held grinder or drum sander is much easier. Just touch the base end (the end that contacts the shell holder) of the collet while the collet is turning and "sneak" up on best length by trial and error. Since the Rigby is only about .006-.007" longer, it won't take much!! Just a touch at a time!! When checking during the process, realize the Rigby neck diameter is very slightly smaller by between .004-007" so the actual compression of the collet on the slightly larger 404 neck may not work or feel exactly like on the 416, but it may work well enough to provide a quality crimp if used with care on how much compression to use. Also, it's a good idea to watch the fingers compress and adjust die accordingly. If it doesn't work, the worst case would be a short Rigby FCD where you might have to add a thin spacer (washer) on top of the shell holder for using on the Rigby. The obvious question then becomes, is the 416 Rigby FCD available?

Pic of FCD with the collet removed from the die body. 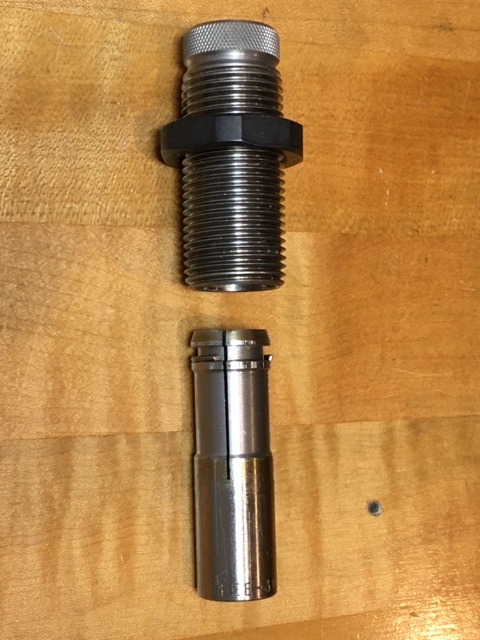 FourFive8 - no need to open the Rigby. The collet easily accommodates the 404 neck. You just don't need to turn the die down as far for crimping. Just shorten the Rigby to support Jeffery case length and go.

Capt_Oscar said:
FourFive8 - no need to open the Rigby. The collet easily accommodates the 404 neck. You just don't need to turn the die down as far for crimping. Just shorten the Rigby to support Jeffery case length and go.
Click to expand...

That's what I was thinking..... & to answer your question fourfive8 - the .416 Rigby FCD in the pictures with the calipers is mine, however I do not have the lathe/machining available or really care to risk damaging my own die for my first time modification.

However if you have the equipment and the know how, I would be willing to risk it in your qualified hands with no liability to you, should we work out a deal.

Capt_Oscar said:
FourFive8 - no need to open the Rigby. The collet easily accommodates the 404 neck. You just don't need to turn the die down as far for crimping. Just shorten the Rigby to support Jeffery case length and go.
Click to expand...

No mention of opening up the collet... simply shortening the collet by the difference in length between the 404 and Rigby.
You must log in or register to reply here.