A huge amount of preparation went into planning this trip. It was booked a full two years in advance to ensure we had the best area and PH’s. Since I had taken numerous buffalo with a rifle in the past, I decided to try to take a Cape buffalo with a bow plus any other dangerous game I could get a tag for.

The first thing to get in order was to obtain a bow that was capable of flinging a very heavy arrow at high speeds and do so accurately. As usual, the folks at BowTech out did themselves by building me a custom 90 pound plus Tribute. I have to say it is the best bow I have ever shot. Right out of the box with minimum sighting in, it shot perfectly with the heaviest arrows I could build and literally almost no vibration. I started with Carbon Express Terminator Hunters arrows then added a two grain per inch weight tube into them which are no longer manufactured by anyone I am told. Then a trip to Lowe’s yielded me a wooden dowel that fit perfectly inside. Finally, tipped with 150 grain NAP Razorcap Broadheads, the arrows weighed in at 690 grains and were chronographed at 257 feet per second. The penetration into the targets was unbelievable. The sighting in as I mentioned was simple, especially with the fabulous new APEX ATOMIC 4 pin site. If you haven’t tried any of the above products, do yourself a favor and go try them. You will certainly been impressed.

Just as I finally had the perfect set up dialed in and ready to go, I began to hear rumblings of new laws being passed in many of the African countries regarding hunting dangerous game with archery equipment regardless of poundage. Before, it was required that the bow and arrow be capable of producing 90 pounds of kinetic energy to be legal. Now, South Africa made it illegal to hunt any dangerous game (i.e. large cats and any thick skinned game which includes Elephants, Cape buffalo’s, Hippos, Rhinos and Crocs) illegal with bow and arrow unless a special permit was issued a reliable source told me from SA. I was then told that Zimbabwe was thought to have made it illegal also on government concessions but nobody knew for sure. After all the preparations and work to say I was disappointed was an understatement. Numerous calls to everyone I could contact, yielded me no new or better information. I was simply told by the booking consultant that all the media had been blown out of proportion and to bring the archery equipment and everything should work out so I continued to practice. You should have seen the looks of other vacationers on the beach in Florida when I was there with my family for our yearly week long beach stint, a couple of weeks before the trip. I pulled out my target against the dunes of sand at 40 yards and punched two dozen holes into it each day. I honestly had people ask me what that “contraption” was. They had never seen a modern compound bow before, what a sheltered life some folks live.

The day finally came when we left on our long highly anticipated flight to Africa. We were fully packed with my superb and finely tuned BowTech and accessories as well as my seasoned, tried and true, trustworthy .416 Weatherby Magnum which has bailed me out of serious situations in the past. After a short flight from Columbia to D.C. and then waiting out a thunder storm for 2 hours in the plane, we actually left for the 15 hours in the air to Jo’Burg, South Africa. As usual that sounds too easy because the problem was that I almost wasn’t allowed onto the plane to Africa since my passport didn’t have two empty consecutive visa pages. That caused a great deal of anxiety till I was told that if they let me go I would have to stay in the airport and not go into Jo’burg as planned. So while everyone else went to a nice hotel and dinner, I meandered in the airport till our expected next am 9 o’clock flight that was delayed till 11:45. That short two hour flight to Bulawayo, Zimbabwe was followed by three hours of driving north to the buffalo area after all the appropriate documents for the firearms were filled out in customs.

Finally, after all this I was there in a remote camp on the western side of Zimbabwe with all my gear and high expectations for a dangerous game bow hunt with all the trimmings. Buffalo and possibly elephant and hippo were on the agenda. That is when the hammer fell and fell hard. The managing game scout for that area of the forestry commission made it very clear when he heard of the bow and arrow that it was illegal to hunt buffalo, lion, elephant and hippo anywhere in Zimbabwe with a bow and arrow. Additionally, you can not hunt leopard with a bow on any governmental concession or forestry land but can do so on private land. As for rhino, you can’t hunt them period in Zimbabwe at all and we never discussed crocodiles since it would be nearly impossible to kill one and recover it from the waters they would quickly retreat to after been arrowed.

To make matters worse, one of the PH’s had an article delineating the new Republic of South Africa’s laws just passed on hunting with a bow and arrow. It is as follows; “Bowhunting of large predators (i.e. lions and leopards and possible hyena’s), black and white rhino, crocodile, and elephant is strictly prohibited in all of the Republic of South Africa.” Private and State land was included in the above statement if it wasn’t clear enough. Hippo and the Cape buffalo were not mentioned either way so who knows if they are still legal but based on the discussions with the PH’s that followed, I gathered those are illegal too but at this writing I can’t be sure. Even bow hunting with a tranquilizer dart for white rhino which had been very successful is now outlawed.

The two years of preparation done by me and all the generosity by BowTech Archery, Carbon Express Arrows, NAP and Tru-Glo’s Apex line provided the fabulous package that I had been dreaming to hunt with was all for not at least for this year. I have a dangerous game hunt rebooked again for the Australian water buffalo in the summer of ’08 but now I will have to wait another year. It is absolutely a shame that the countries of South Africa and Zimbabwe have passed a wide sweeping ruling without giving consideration to the equipment to be used. You can still go and hunt any plains game you wish with any type of bow and arrow you pick. There is no minimum poundage or arrow weight as required to hunt big game by many of the 50 states here in the U.S. They have a minimum caliber that must be used on rhino, Cape buffalo and elephant. You must use at least a .375 caliber or larger period so why not make a minimum poundage or kinetic energy for a bow and arrow before they allow you to hunt dangerous game even if you have to pass a proficiency test at 30 yards. I suspect that almost no one there has a clue about the efficiency that our bows can kill with.

Finally, I was told that both of the above mentioned countries allowed people to apply for special permits to hunt the dangerous game with a bow but as of this writing many had applied but none had been granted and the process can be extensive. I don’t know what the answer is but it is a damn shame and a huge loss to the bow hunting community. There is nothing more thrilling at least to me then to be very close to an animal that can and will kill you if given the opportunity and trying to harvest him with your bow. It may not be for everyone but I will certainly miss it and hope it changes soon enough.

As a final note, I was told that in both countries on private land with some land owners where government game scouts are not required to accompany you and you PH on your safari, some land owners would allow bow hunting of dangerous game as long as nothing was said later. Although it is tempting and you likely would get away with it, I would not advise it one because it is still illegal no matter whether we agree with the law or not and secondly, the consequences here in the U.S. would be dire to say the least. If it was ever reported to the U.S. Fish and Wildlife, you surely would be charged with a Lacey Act violation.

If anybody was wondering by now, I did, as always, have a good hunt anyway and collected some nice trophies with my favorite .416 Weatherby. As usual be safe and enjoy the outdoors.
Last edited by a moderator: Dec 1, 2016
TheHuntDoctors
Paul Plante M.D. & Steve Merlin M.D. 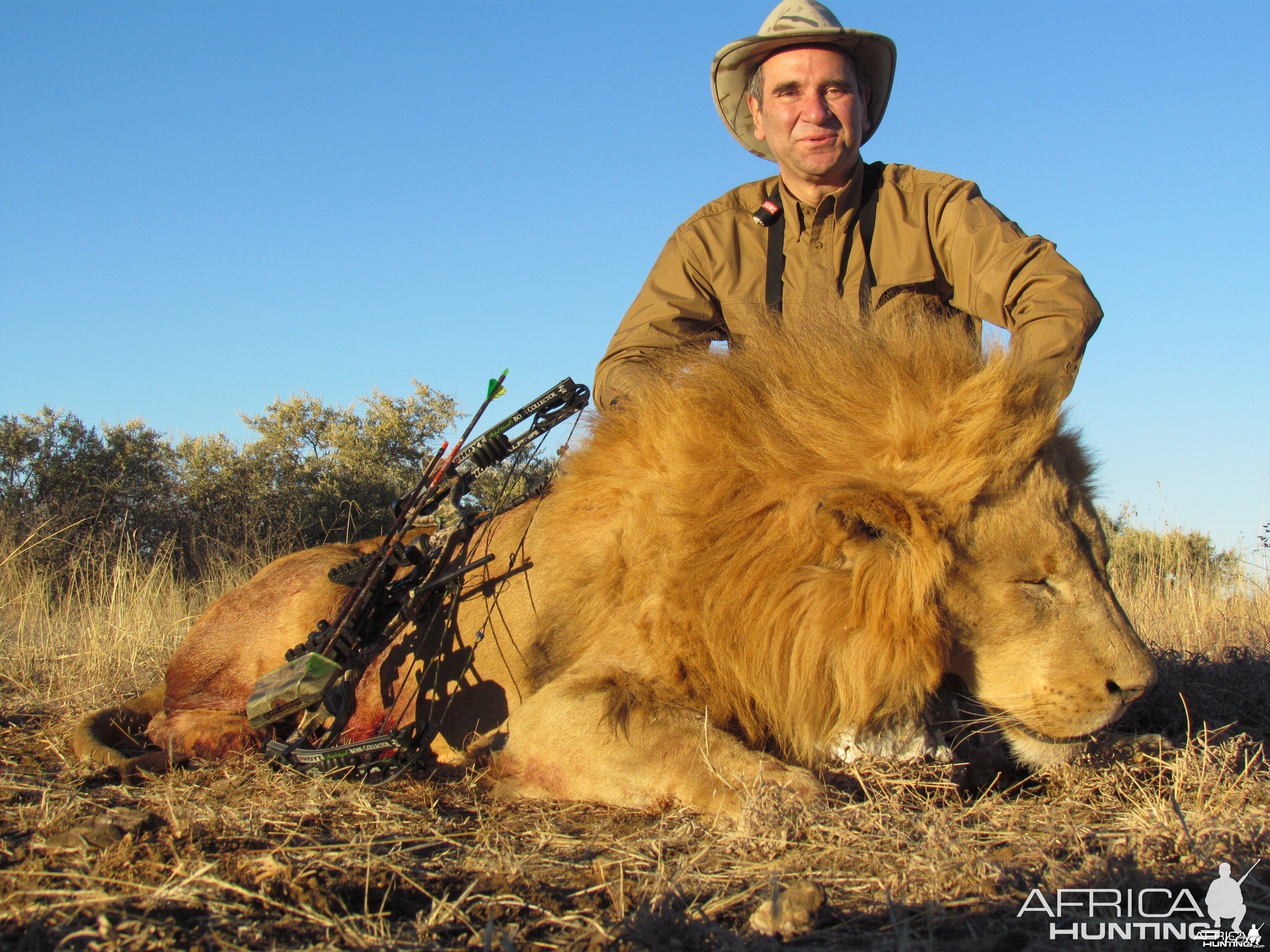 The Development of Modern Bow Hunting in South Africa

J
Jaynecobb cal pappas Jaynecobb wrote on cal pappas's profile.
I hate to bother you....I own 2 of your books including British bore rifle. I was hoping you might have more 10 bore loads. For the heavier and later rifles. Any help would be appreciated.
Friday at 2:17 PM •••