In his article 'Small Bore Versus Big Bore' from American Rifleman, December 1954 he mentions the .256 MS for killing a lot of meat animals for his camps. While the 303 Enfield and 275 Rigby also get mentioned he doesn't bring up the 6.5 X 54 MS at all in the article.
B

I am starting to think now that people just assumed he was using a 6.5x54. Even the guy who wrote the article for this thread assumes he used a 6.5x54, I can't find any references anywhere he did use one.

Bos Javanicus said:
I am starting to think now that people just assumed he was using a 6.5x54. Even the guy who wrote the article for this thread assumes he used a 6.5x54, I can't find any references anywhere he did use one.
Click to expand...

I've read most of Bell's stuff at least two or three times. And you know, you may be exactly right. I like most didn't concentrate on the exact cartridge when reading about his use of the 256/6.5. I know he liked the little 256. But after re,re and re-reading all I have by Bell, I too can't find the exact cartridge in reference. May be just simple and understandable oversight and/or assumption based on both the rifle and the cartridge having the same name of Mannlicher-Shoenauer (M-S). I could even see how Townsend Whelen who compiled and edited for publication a bunch of Bell's material for him, could have just glossed over it and not exacted or dwelled on that particular detail.

It's also apparent, to me at least, that he really liked the 318 and the history of the 7x57 (275 Rigby ) as his trademark cartridge for elephant may have been all together different if quality, reliable "solid" bullet 318 ammo had been available in quantity to him instead of the 7x57.

Of course we may never know with certainty any of this trivia in question and likely it really doesn't matter much anyway. His legacy and amazing life stands on it's own merit.
Last edited: Jul 13, 2019

After beating the bushes a little more about this 256/6.5 haziness I think I can make some kind of educated guess - a real SWAG if you will.

He clearly states in his writing he used the Gibbs 256 (6.5x53R) for general meat gathering and the Mannlicher-Shoenauer in 6.5x54 (M-S) for quite large number of elephants.

He also stated that the 6.5 with the 156 (160?) grain "solid" had plenty of penetration potential because of the high sectional density but because of the "thinness" of the shank it had a tendency to bend, if stressed, thus losing much of the advantage of the high sectional density. He also stated the 7x57 and .318 did not have that tendency.
Last edited: Jul 17, 2019

150 rounds of DWM 156 gr FMJ round nose in original packaging!

HWL said:
I felt like Karamojo Bell while shopping .....

Very nice - hopefully non-corrosive primed?
"We sleep soundly in our beds because rough men stand ready in the night to visit violence on those who would do us harm" American Novelist - W. Churchill

Non corrosive sinoxid primers were patented in Germany in 1928 and the complete ammunition production was non corrosive within a few years.

Nontheless, I will collect the telephon books of the neighborhood for a little penetration test. 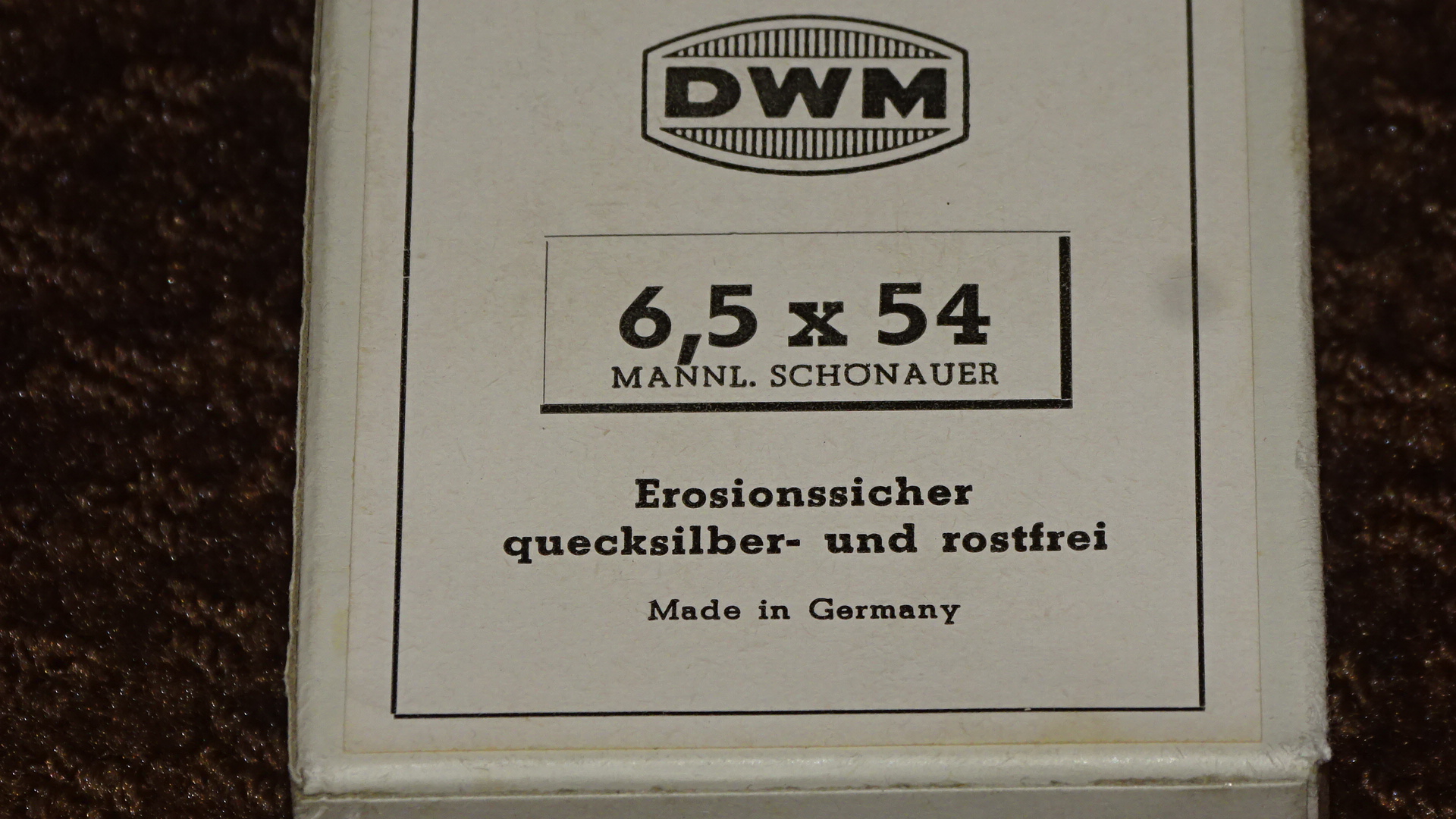 Excellent! Original ammo of more or less correct vintage/load/bullet can be hard to come by. I would be most interested in your wet pack test and would greatly appreciate posting the results! It's a way to compare controlled test results with what Bell described a hundred years ago.

I bundle phone books into more or less 5-6" bundles using nylon string. Swelling during soaking will break lesser string. By using bundles, I can better describe and diagram bullet caused dynamics along the channel and systematically find and record any fragments found along the path. I add a 1" piece of hardwood between the 1st and 2nd bundle to simulate bone. I soak the bundles overnight in a large tub to ensure 100% water saturation then place them in a trough just prior to the shot. I have to weigh the bundles down with bricks to completely submerge them. I try to reduce the load to simulate a downrange impact velocity the bullet would have at about 50 to 100 yards. Then attempt to shoot directly into the center of the facing bundle and exactly down the center line of the horizontal stack sitting in the trough.

I could not find enough telephone books in the neighborhood, so now I am collecting their I-phones...

I am also looking for old 7mm Mauser 175gr FMJ RN to compare it's penetration capabilty with the old 6,5x54 MS load.

"Ammunition for light rifles was cheaper, too, which appealed to Bell the businessman and canny Scot. In 1913 he ordered two .416s from Rigby; it’s easy to imagine that he was curious about this new big-game cartridge that John Rigby had invented for the Mauser. He found that it was no more deadly than his .275s, but heavier, harder-kicking and noisier, and the ammunition cost more than twice as much."

I like others am a huge fan and like someone else mentioned only 10% of the stuff he did is true, he's quite the man in my book.

I have his book, just have not read it yet.
Last edited by a moderator: Sep 17, 2019
You must log in or register to reply here.