Walter D.M. Bell (1881-1951) has become a legend among elephant hunters due to his great success in the ivory trade during the golden age of hunting in East Africa. He is known as “Karamojo” Bell because of his safaris through this remote wilderness area in North Eastern Uganda. He is famous for perfecting the brain shot on elephants, dissecting their skulls and making a careful study of the anatomy of the skull so he could predict paths of bullet travel from a shot at any angle in order to reach the brain. Using mostly 6.5mm and 7 mm caliber rifles, he was an advocate of shot placement over big bore power for killing efficiently. Bell perfected his shot to the degree that he mastered it from all positions, including diagonally from the back. This has been since referred as “BELL SHOT”. 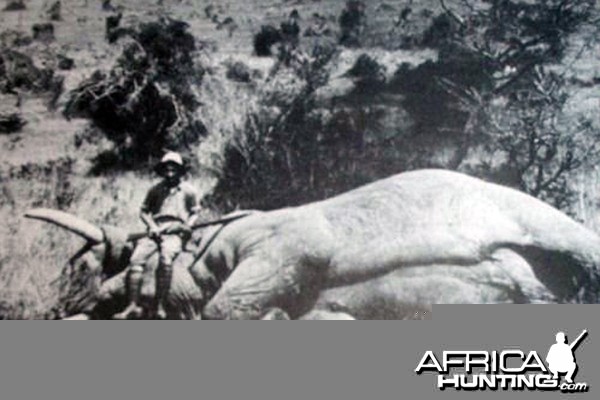 Bell recorded all of his kills and shots fired. It was a business to him, not pleasure, and he needed to record expenditures…

• He shot exactly 1,011 elephants with a series of 6 Rigby-made 7x57mm (.275 Rigby) rifles with 173 grain military ammo.
• He shot 300 elephants with a Mannlicher-Schoenauer 6.5x54mm carbine using the long 159 grain FMJ bullets.
• He shot 200 pachyderms with the .303 and the 215 grain army bullet.
• He went to a .318 Westley Richards for a while, which is a cartridge firing a 250 grain bullet at about 2400 fps, but found the ammunition unreliable and returned to the 7mm.
• He also recorded that one of the reasons why he favored the 7x57 was that the ammunition was more reliable and he could not recall ever having a fault with it. Whereas British sporting ammunition, apart from the .303 military ammo, gave him endless trouble with splitting cases.( He used the .303 in the hope of running into a Herd of Bulls so he could make use of the 10shots ! He was famed for using a Martini in .303 & holding the spare rounds between his fingers & could fire the rifle as fast as a bolt action !)
• The balance of his elephants were shot with this .318 and his .450/400 Jeffrey double rifle.
• He wrote about being able to drop an elephant with a light caliber rifle if he shot it in the same place that he would have shot it with a heavy rifle.
• It was unmentioned, but understood, that 7x57 ammunition cost a tenth the price of large caliber .450/400 Jeffrey cartridges and money is always a factor in business.
Just out of interest, it is must to be mention that to judge ammunition expenditure and his own shooting, he calculated an average. He discovered that with the .275 (7x57mm) he fired an average of 1.5 shots per kill. This means that half the time he only needed one shot. That is a fair performance for such a large number of elephants killed and considering that it is common today to fire an insurance shot, anyway. Seemingly a business man of a Hunter with a profit & loss acumen.

It is also interesting to note that, although Bell is the most famous proponent of using small caliber "nitro" rifles for large game, he did not discover the technique, nor was he its earliest advocate. Well known hunter Arthur Neumann, for example, had been shooting elephants with a .303 Lee Met ford rifle for years before Walter Bell got into the business.

WDM Bell is forever associated with the John Rigby & Sons Mauser rifle and the .275 Rigby cartridge. ".275 Rigby" was the British designation for the German 7x57mm Mauser cartridge. This cartridge propelled a .284 caliber, 173 grain bullet at around 2300 fps and the bullets he used for elephant brain shots were full metal jacketed solids. He declared once that a soft point bullet had never sullied the bore of his rifle. It is interesting to compare these ballistics with what is commonly regarded as essential performance today. 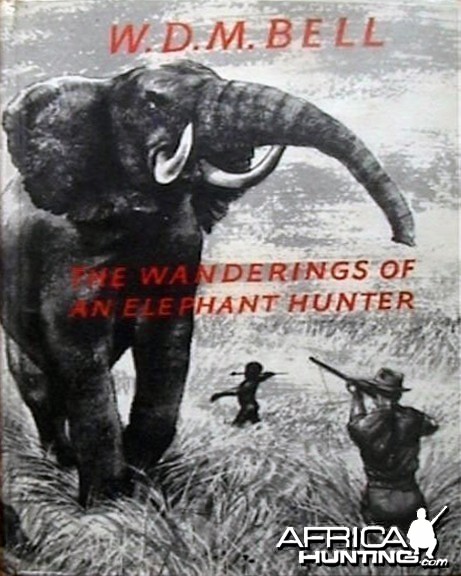 The wanderings of An Elephant Hunter by Walter D.M. Bell - This is the first book written by W. D. M. Bell, an intrepid adventurer, who was known far and wide as “Karamojo” Bell for his extraordinary elephant hunting exploits in the Karamoja province of Uganda and elsewhere. Wanderings, considered by many to be the greatest of all elephant books by the greatest of all elephant hunters, is a series of elephant hunting essays and stories from the glory days of Bell’s career.
It gives Bell’s experiences in Uganda, Sudan, Ethiopia, Central Africa, and West Africa. Bell’s approach to elephant hunting was unusual for his day and time. He studied the anatomy of elephants in order to establish the trajectory of bullets from any angle, and he discusses his theories in this CD. Foremost an elephant title, Wanderings also includes tales of derring do with buffalo and lion. 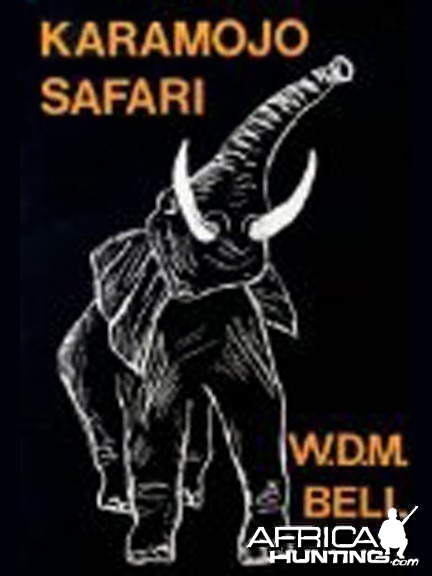 Karamojo Safari by Walter D.M. Bell - One of the finest stories ever written on elephant hunting. Starting out from the coast of Kenya, Bell takes a long safari into the interior of what was then the darkest of Darkest Africa. He leads us through the entire safari, beginning with assembling a huge retinue of porters, to the climax when he returns laden with a staggering amount of ivory. Most of the hunting took place in Karamojo (now Uganda & Kenya).

As a further example of marksmanship (if brain shooting a great many elephants isn’t enough), Bell used up the remainder of his unwanted .318 ammunition by shooting flying birds over an African lake. Spectators believed that he was using a shotgun and were amazed to find that he was actually using a rifle. He finally died from a heart attack at his Scottish estate in 1951.

A great Elephant hunter who excelled in bringing down these giant pachyderms with plains game calibers... He used a .303 Lee Enfield to shoot Elephants 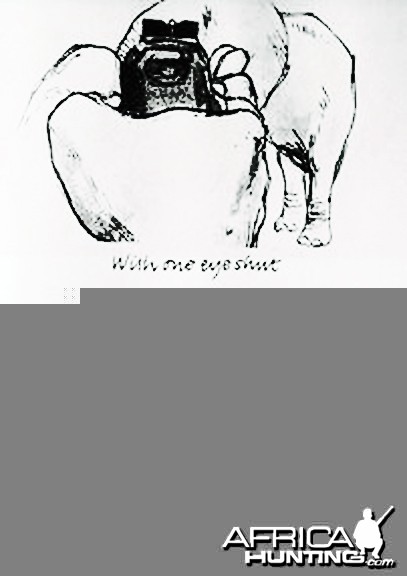 "With one eye shut" from The Wanderings of An Elephant Hunter by Walter D.M. Bell

Thanks for giving others info on one of my heros of my youth!

Yes , Ruark gifted it to Mark Selby . Gail Selby holding the same .275 Rigby in the snap. 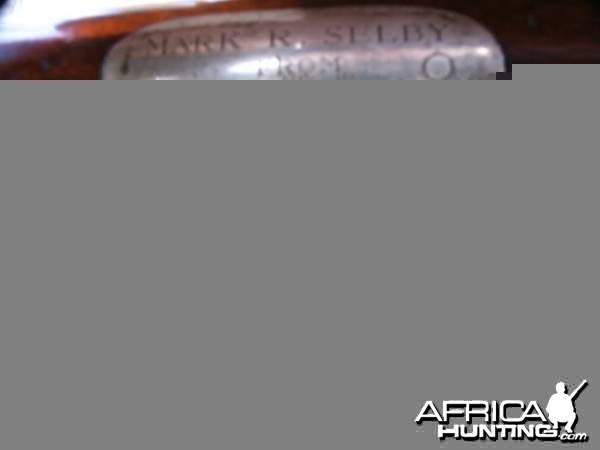 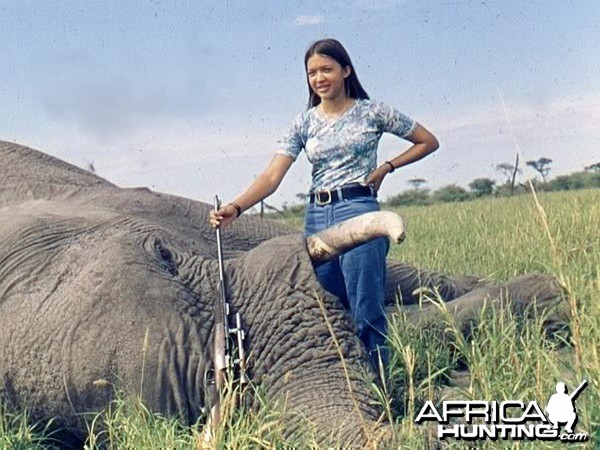 Karamojo Bill said:
I knew this but, (I wonder why....look at the moniker).

Thanks for giving others info on one of my heros of my youth!

Thats really sad to know Mark sold the .275 , a gift that too a Rifle with a long hunting history which was PRICELESS , I would have never sold it ....

monish said:
Thats really sad to know Mark sold the .275 , a gift that too a Rifle with a long hunting history which was PRICELESS , I would have never sold it ....

I could have never sold any of Bell's rifles, much less that beautiful 7X57 Mauser. If I remember correctly, Mark Selby also has Bell's .450/400 Nitro Express, I hope he doesn't sell that one too.

Christian Snyder said:
I could have never sold any of Bell's rifles, much less that beautiful 7X57 Mauser. If I remember correctly, Mark Selby also has Bell's .450/400 Nitro Express, I hope he doesn't sell that one too.
Click to expand...

I believe the 450-400 is now in the John mecam collection in the states. I am assuming it was sold also.

I read Selby sold his famed .416 to a collector in the states also.

Attached is an American Rifleman article that includes some info about the rifle - Download the entire article at View attachment the-kwaheri-safari.pdf.


This a link to Gail Selby's site. It has some interesting stories.

Thanks for posting those links.

Great an article monish. I would like to have his rifles.
Witold

Great posts on this side.
Thank you fellows.

Interestingly, in Karamoja the elders still remember him. Their history is recorded in songs, and they can still tell you about the great rinderpest that killed most of the cattle in the 19th century, or what was the price of ivory and slaves in 1890.

In Southern Karamoja, they used to call Bell "Longelly N'yang", which could be loosely translated as "Rusty" - I don't know if this had to do with the colour of his hair, or skin tone...

Thanks for sharing Kano.
Witold

While this thread is up, does anyone know why the price tag for " The Wanderings of an Elephant Hunter" are so steep?
"A man and a gun and a star and a beast are still ponderable in a world of imponderables." Robert C Ruark 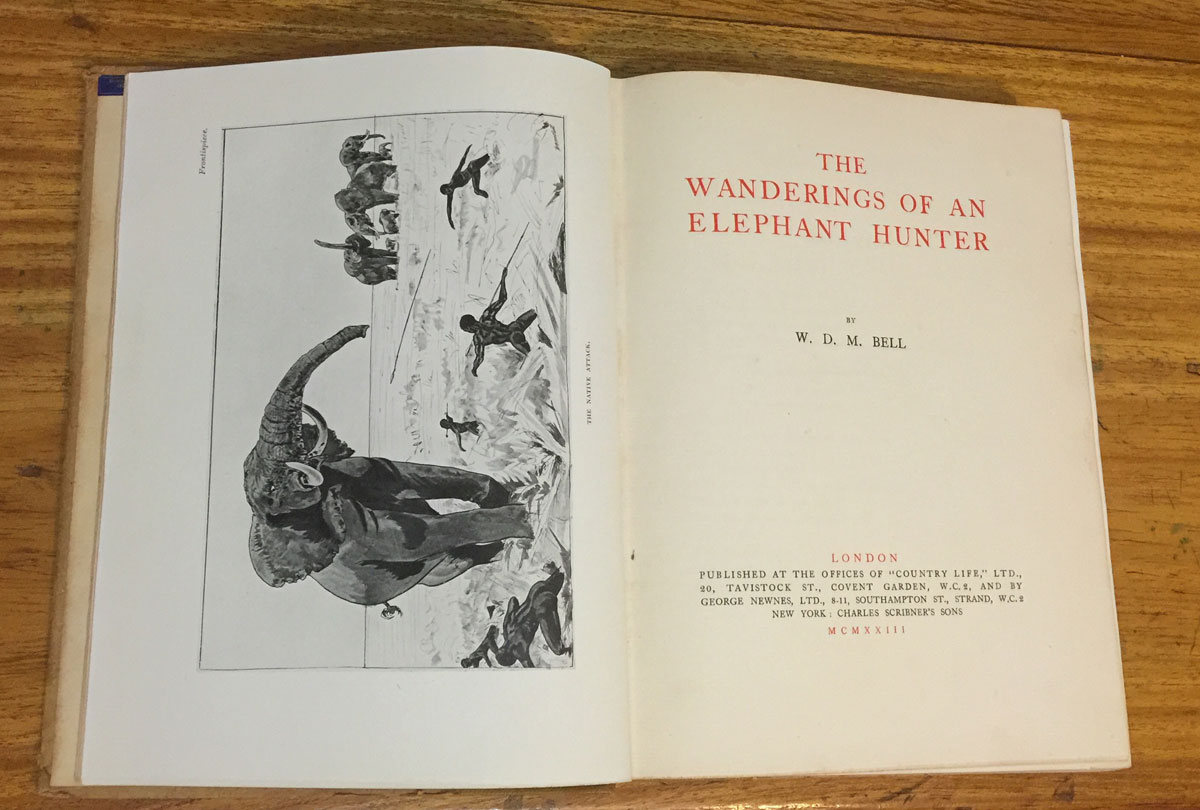 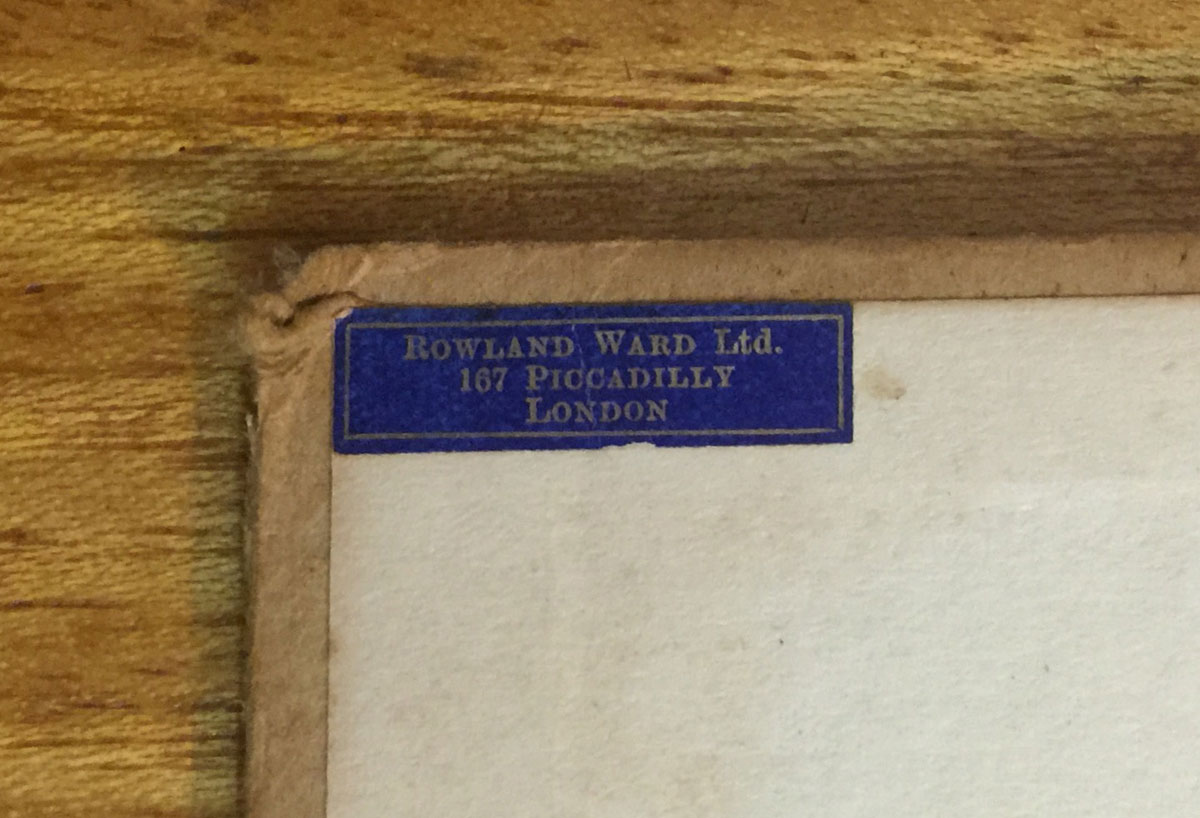 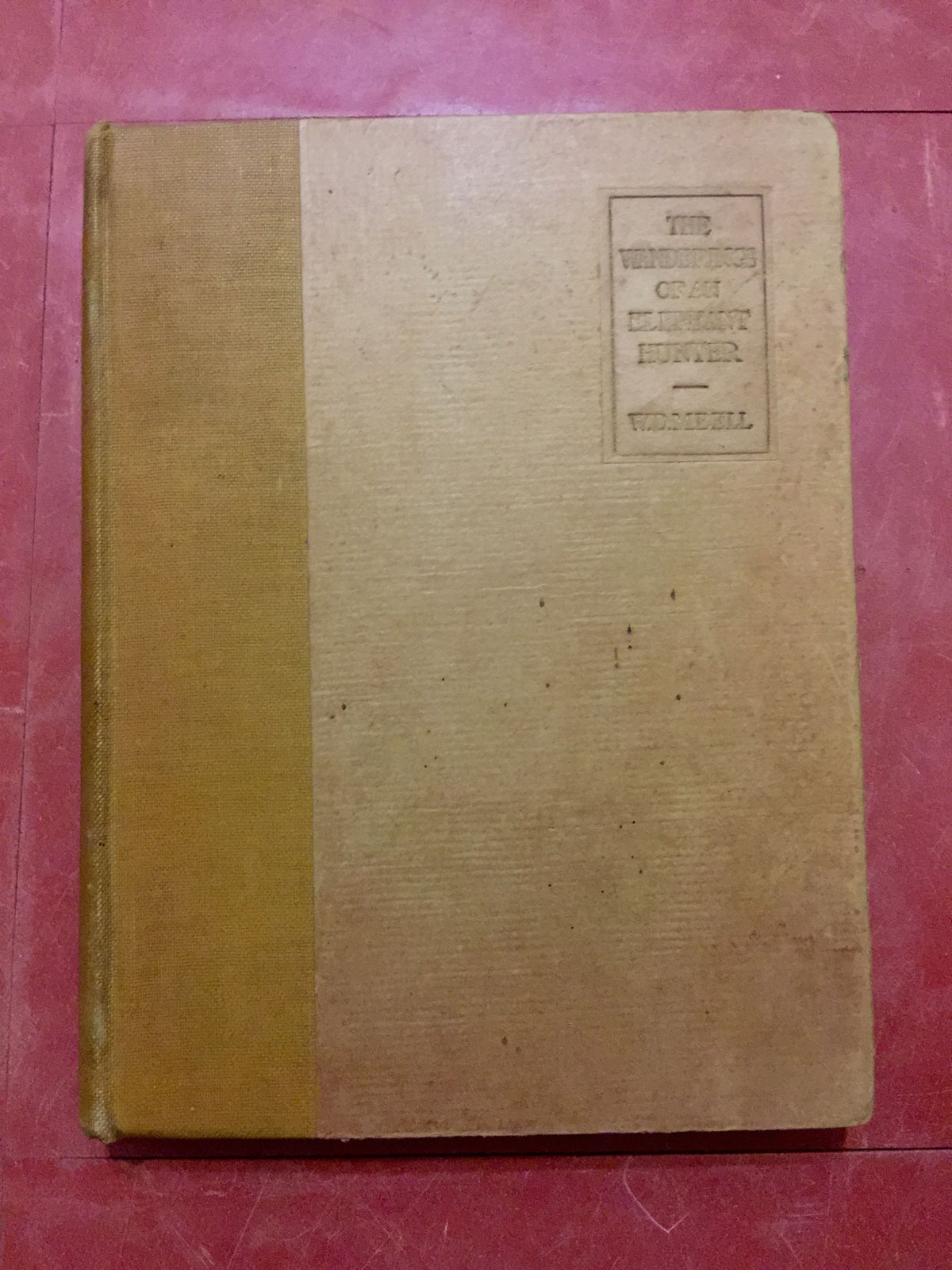 Wow!!!! I Envy you Kano. Wher you bought it?
Witold

Sorry to be the party pooper here.
However, according to Rigby's records, Bell during his elephant hunting career ordered not one but two Mausers from Rigby, caliber .416 and at least 1,000 rounds of live ammunition for them.
These .416 cartridges were as per his instructions - loaded with 410 grain "solids" and delivered to him, sealed in "tropical tins" no doubt to resist the Uganda humidity.

Bell wrote very much about his own daring-do and the central theme was always how he was such a cool head and dead shot with small bore rifles in the face of huge and dangerous animals.
Bell did not waste much (if any) ink on why he then should need two .416s and all that 410 grain / "solid bullet" ammunition for them.

In spite of his self proclaimed prowess with small bore rifles against all manner of dangerous beasts, especially including over a thousand elephant, I smell a fish in his stories (a .416 Rigby caliber fish).

Bell was an incredible character to have been successful in ivory hunting, no matter what calibers he used.
But, every time I hear someone use Bell's name in support of small bore rifles for hunting heavy, ponderous animals, I automatically raise one eyebrow.

No disrespect intended here but, I am very suspicious of Bell's claim to taking over a thousand elephants with his small bore rifles.
Velo Dog.
Last edited: Jun 5, 2015

The truth lies in the middle, Velo Dog.
Witold
You must log in or register to reply here.