The Rise of a Dream!​
Many of us have a favorite mount in our trophy collection, one that recalls a particularly exciting hunt, or perhaps it was the first hunt taken with a child, or just something about that one particular trophy stands out above all the rest. That is what this little photo play is all about.

I had a tanned lifesize hide of an African Lion (a gift from my wife when we were first married, that we picked it up at an upstate New York Taxidermist on our first vacation together) and I wanted to mount it in a "dream pose" ... a simple, relaxed, standing pose. I finally got him done, after the tanned skin had laid dormant in one of my shop chest freezers for nearly ten years! They say "good things come to those who wait" ... this is true!

I finally found many of the photos from my competition days, including those awards won by what I consider my personal Masterpiece, my African Lion.

It all began before I even entered him in his first competition, when he made the cover of the prestigious "Breakthrough Magazine", one of the top trade magazines. I sent a few photos of him to the magazine's editor in hopes that it would be picked for a cover. After a few previously failed attempts, I had my "Cover Boy"! 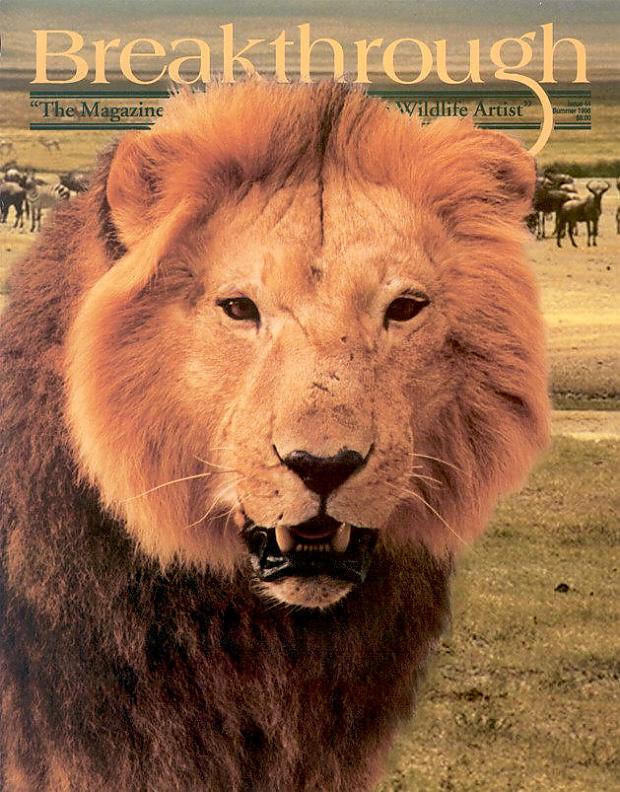 The first two shots are from the 1998 NTA -- National Taxidermy Association -- Convention and Competition, where he was awarded a blue ribbon in the Large Mammal Category. 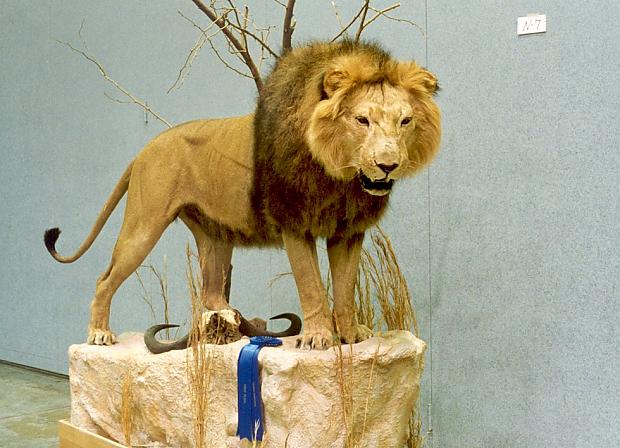 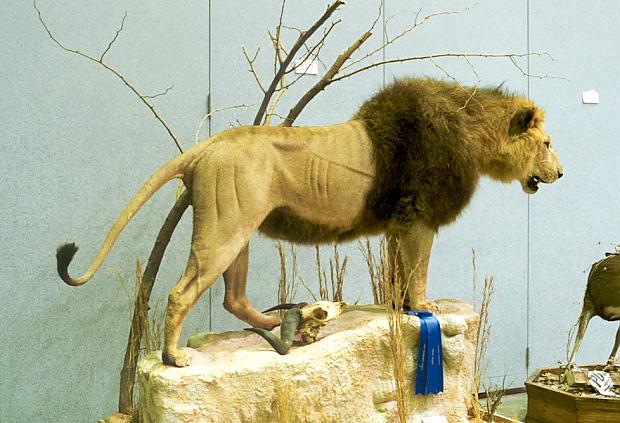 This was his winnings awarded to him at the 1998 IGT -- International Guild of Taxidermy -- Convention and Competition. He really "cleaned up there! 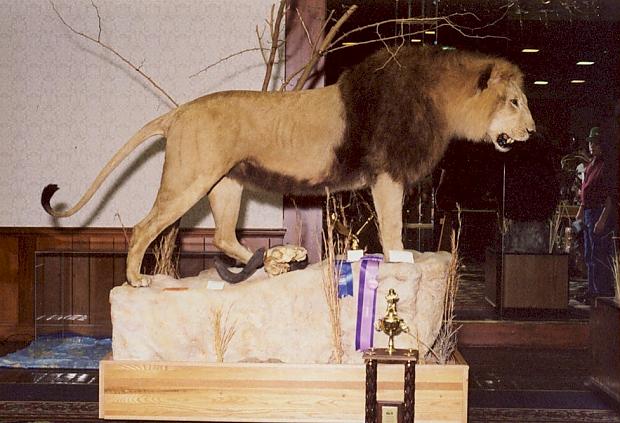 After his momentous wins at the IGT, he -- along with all the other award winning mounts -- were featured in Breakthrough Magazine. Here is a close-up from that page, and his list of impressive wins. 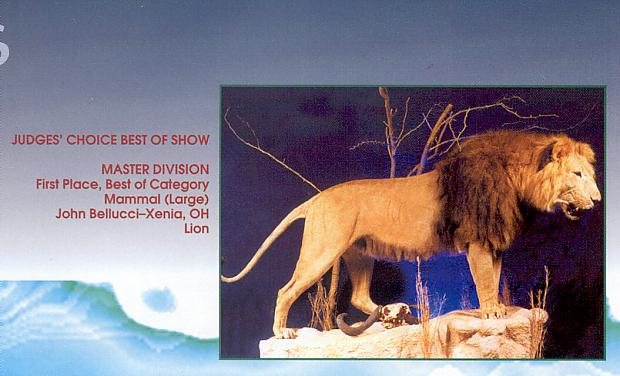 Following his wins, the Lion made two more Taxidermy trade magazine covers; the first of which was "American Taxidermist Magazine" ... 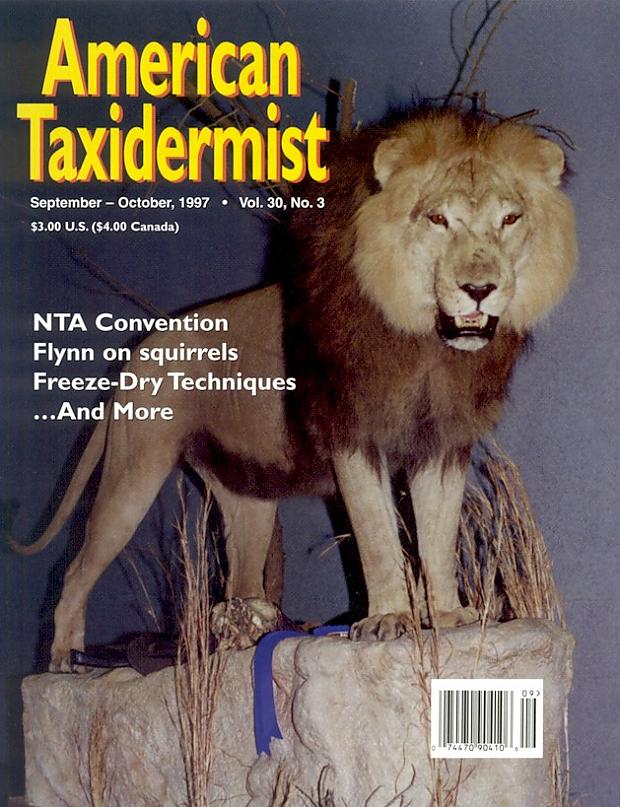 ... and the second was the IGT's "In-Taxidermist Magazine". 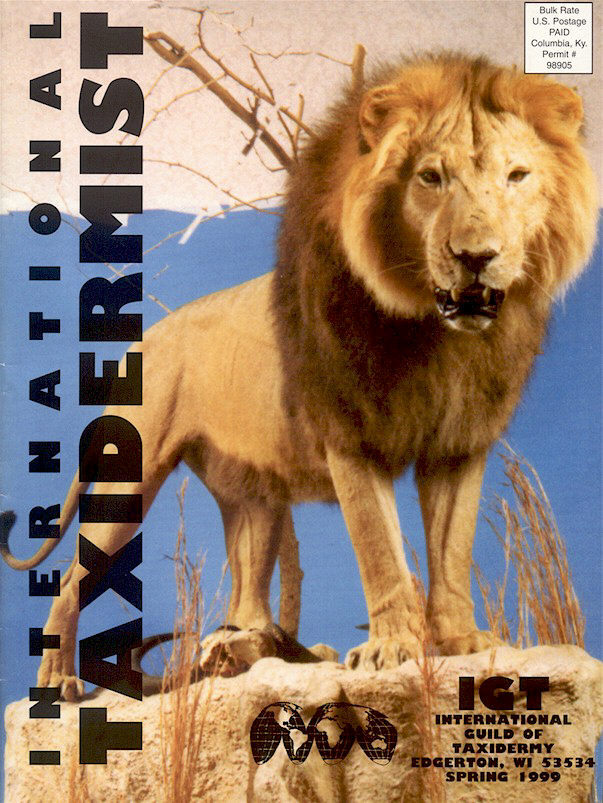 Before I mounted my Lion, I had in mind to produce for myself the "Ultimate Lion Mount", which, in my mind's eye, was a simple mount of a large male African Lion, just standing, "surveying his kingdom" -- like I said, 'in my mind's eye'. I also knew that to realize my "dream" I would want to expand my knowledge of the African Lion. I had mounted Lion's in the past, but those were customer's mounts, done when I worked for commercial studios that needed to get the work "out the door"; plus it was back in a time when leaping attack poses dominated most trophy rooms. There wasn't a lot of need for "study" ... at least not the type of study one would want to build their dream cat on. Once I had all that I felt I could know about these magnificent cats, I dove into his creation.

As I worked, I recorded the entire process on film, again, so I would have a photographic record of the birth of this dream of mine. When I was finished with him, I found that I had realized my dream ... my "Dream Lion" was standing in front of me! And I was happy! And that, above all else, was why I created this restoration ... for my own satisfaction. Then I thought about entering him in some competitions to see what he could do for himself. At this same time it was suggested to me by the owners of the supply company I had become friends with, that I should write down what I had done, including what I had learned about these great cats. It was agreed that they would publish, promote, and sell the book.

So, prior to the time I was entering my mount in these various competitions, I was working on sharing what I had learned about the African Lion, as well as the Tiger, Leopard, and Cougar. I began writing a book that contained all of this accumulated knowledge, and a thorough step-by-step on how this Lion mount was created. Included was a chapter on a female Black Leopard mount I had completed, that included an original sculpted mannikin that I made for her.

It was also during this time of research that I discovered just what I had in the way of this Lion. Let me preface this by stating that this is the largest African Lion I had ever seen! True, he was a pen raised, and housed African Lion, but his total length measures 9½ feet, and his height measures 46½ inches tall at the shoulder. His nose to base of tail measures 82½ inches in length! His head was not just a little longer than usual, but it is also higher at the crown, wider at the jowls and the cheek bone -- the Zygomatic Arch -- giving him an overall much more square head than what is normally seen. The last facial detail noticeable in the this Lion is a flatter nose profile than seen in other Lions.

Lastly, his mane is not the long, flowing type of hair one would expect to see in a Lion with as full a mane as this fellow possesses. It is more like the thick hair of an American Bison! There is a deep pile, almost woolly undercoat, with finer longer guard hairs to this guys mane. The "Halo" -- the golden colored hair that normally fully surrounds a Lions face -- does not completely surround this males face. He has large elbow tufts, as well as a full-length belly fringe. Now, I realize that most pen raised and kept Lions have this belly fringe, as they do not have to contend with thorny, tearing underbrush, but he also possesses a somewhat woolly undercoat to his body fur! This is typical of a mammal the hails from a colder region.

After researching all these separate qualities -- mane and coat growth, head build, and very large size -- I came to the conclusion that what I have here, is, in reality, a Barbary Lion! This species was originally from the Northern, "Barbary" region of Africa, from the mountainous areas. An area that would produce a mammal with thicker, woollier fur. This was the primary species of Lion captured by the Romans to use in their Gladiator "games". And they sure put a dent in the population at the time! Eventually, through unregulated hunting, the last Barbary Lion went extinct in the wild sometime in the late 1800's, with the only remaining live specimens found in zoos and private collections. This is the only thing that has kept this bloodline alive! This cat, being pen raised and kept by a private individual, definitely "fit" the overall physical description of the Barbary or "Atlas" Lion! Knowledge is power!

This is a live example of a Barbary Lion. 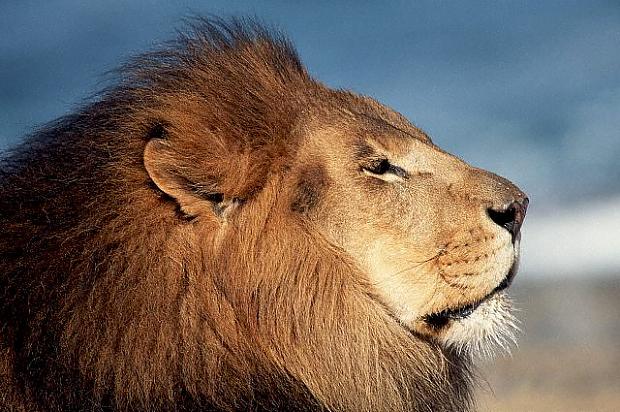 This is the head of my mounted Barbary Lion. 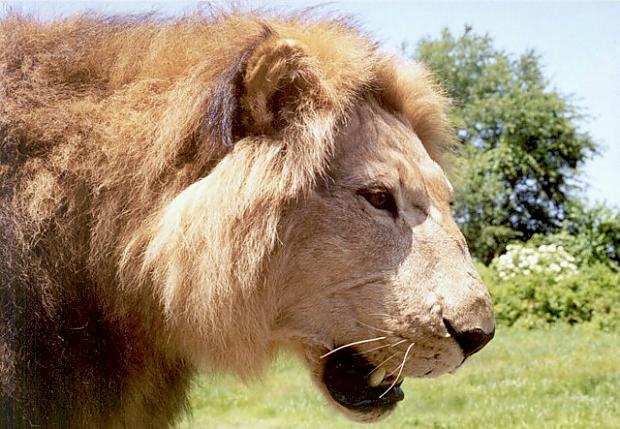 Between the intense immersion study of the big cats -- African Lions in particular -- the time in mounting the two animals featured in the book, the writing, rewriting, editing and all the rest, it turned into a five-year labor of love. So now, my Lion was on yet another cover -- four in all to this point -- this one being his very own book! The story of his "birth" if you will. To top off the accomplishment of having the book published, one of the owners of the supply company entered a little memorandum -- the Epilogue -- on the very last page of the book, acknowledging my Lion's wins at the IGT! This was a very nice surprise, indeed! 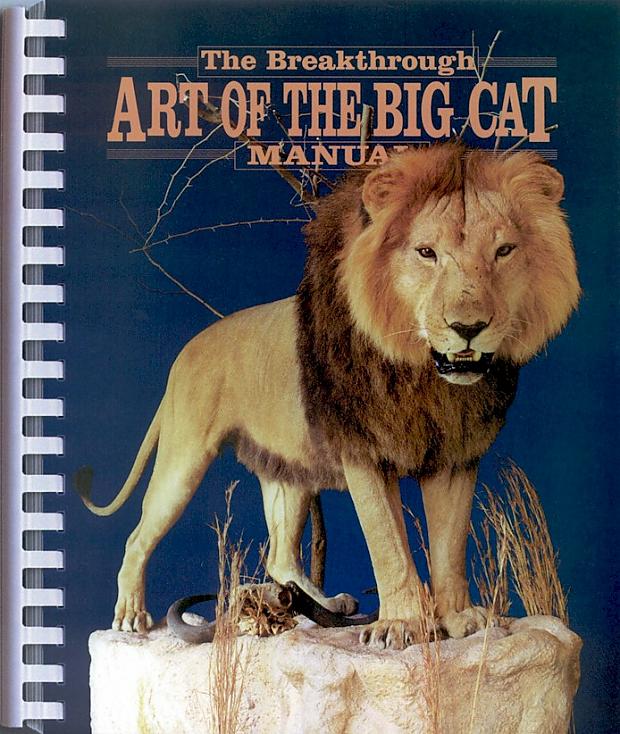 And then, even more notice and accolades. This time from WASCO (Wildlife Artist Supply Company), the Taxidermy supply company that I made a couple of Taxidermy videos for, and who carry my photo reference albums, also the company that publishes and sells my book, put the big guy on the cover of their 1999 supply catalog! Granted, it was to advertise and sell the book, but still ... WOW! This, I had absolutely no pre-knowledge of ... I guess I should have ... but I didn't. Needless to say it was a most pleasant surprise when I received my copy of the catalog!
Follow the link to the book! The Breakthrough Art of the Big Cat Manual 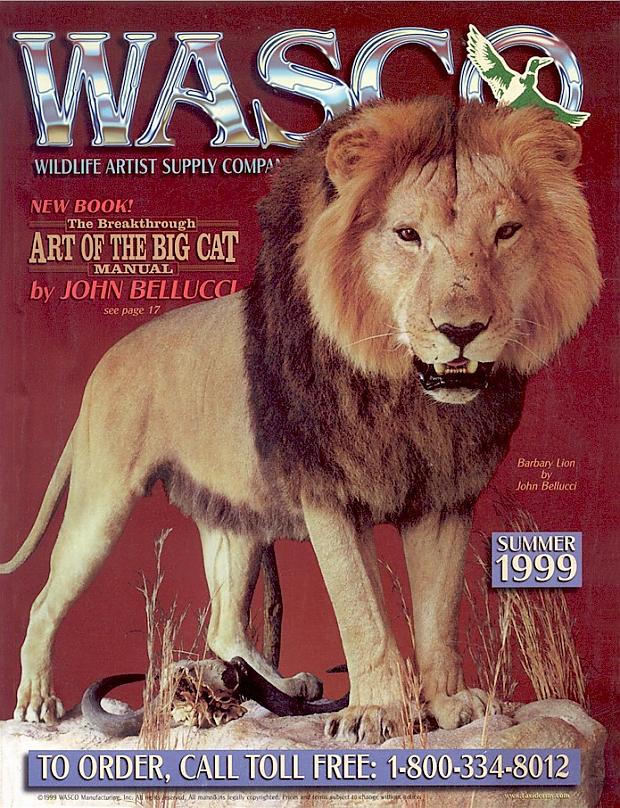 Needless to say, I have a lot of personal pride in this mount! 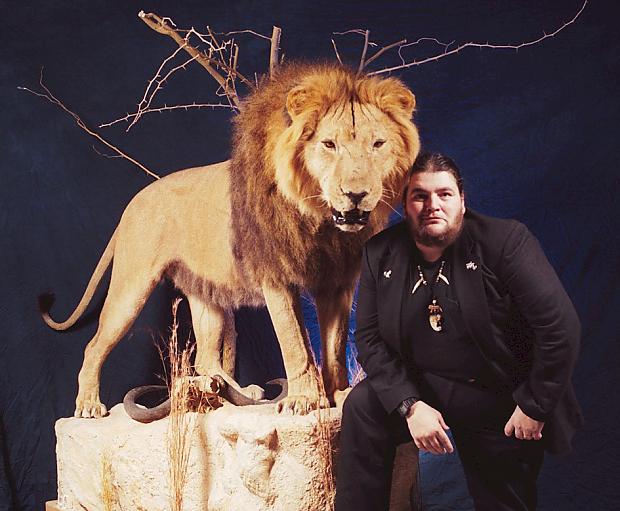 Of late, I've been toying with an idea to make this mount even more complete for myself. I have several African Lion Cubs, and a couple are of a fair enough size, for one of them to be incorporated into the mount. Something along these lines ... 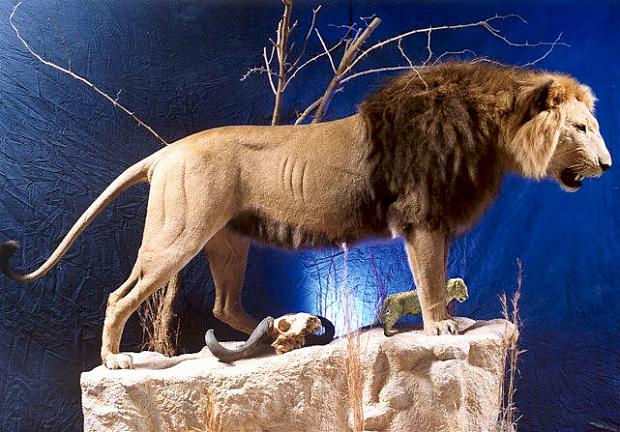 Eventually, there will even be some greenery added to the thorn tree at the back of the base. In these ways, I guess you can say he's still a bit of a work in progress! And when I get him and his surroundings right where I want them, I'll post those pictures as well. So ... stay tuned!

Even though this mount was completed several years ago, and competed several years ago, he looks as good today as he did when first completed! Not only that, but the level of quality that found its way into this -- my "Dream Lion" -- is the same quality that finds its way into each and every mount that I produce today. In fact, my whole career goal has always been to strive to learn about each and every species of mammal that comes into my studio, so that I can give my clients the best quality that is humanly possible! To borrow an old line from Ford Motor Company ... "Quality Is Job One!" And that slogan is never old ... in fact, it is timeless!

Thank you all for letting me brag a bit!

John, thanks for the great story! I love how you thought out the whole process and didn't just "mount the lion"...you are a true artist.
H

I love to see someone who truly takes pride in their work and whose work speaks for itself. A mount for the ages.

John,
Thanks again for another super post, I really enjoyed reading it! It's great to follow you through the whole journey with your Lion and what it means to you. After reading your story I look at your Lion through different eyes. Nice work and great story :thumb:.
Jerome Philippe, Founder of AfricaHunting.com
M

I think I remember being at your home way back when you were working on this project and it took up your whole living room.

You and the mount are both holding up pretty well!!!
You must log in or register to reply here.

The Rise Of A Dream

My Namibian taxidermist sold my trophies!!!