The .270 WSM (Winchester Short Magnum), arrived in 2001. Like the .300 WSM that pioneered the series, it is a true short-action number, with a hull just 2.10 inches long. The .535 base is a near match for bolt faces machined for the .532 bases of most belted magnums. It was inherited from the .404 Jeffery (circa 1910), whose case has produced quite a few rimless hot-rods, including Dakota’s line of mid-length magnums. The .270 WSM has a steep 35-degree shoulder and does not feed as smoothly as longer, more traditional rounds – including the belted .270 Weatherby, which preceded it by nearly six decades. But the .270 WSM packs considerable power into that compact hull. It outperforms the .270 Winchester by more than it trails the Weatherby.

Soon after the cartridge appeared, I managed to snare a prototype Browning A-Bolt rifle in .270 WSM. Factory-loaded 130 Ballistic Silvertips crossed my Oehler sky screens at 3,290 fps, 140 Fail Safes at 3,115. Both equaled chart speeds, even from the modest 23-inch barrel. This A-Bolt was very accurate. One three-shot group measured under an inch and a half – at 300 yards! Browning let me take the rifle on a do-it-yourself elk hunt in Wyoming. Two weeks later, I was climbing in snow.

Not until the last day of that trip did I find elk. Still-hunting through black timber on the cusp of a storm, I slipped into a small herd. A cow examined me intently, then ghosted off. Suddenly, a young bull eased across an opening. He hunched at the shot, spun, sprinted and fell dead. He was, I believe, the first bull elk taken with a .270 WSM. The storm broke as I tugged him onto a grassy bench.

When Norma began loading ammunition for the .270 WSM, Winchester’s Fail Safe had already been dropped for other designs. The selection of .277 bullets available Stateside was expanding, however. Eventually Norma would adopt the 130-grain Nosler Ballistic Tip and the 140-grain Barnes Triple-Shock. It would add the 150-grain Oryx, a bonded bullet for tough game. The Oryx, still young, has earned quite a reputation afield as an alternative to the likes of the Swift A-Frame, Federal Trophy Bonded and Nosler Partition. I’m keen on lead-core bullets that open reliably to over double-diameter but stay intact to plow straight, deep wound channels. The Oryx is one of few bullets that perform this way in thick muscle and heavy bone. It gets high marks from moose hunters in Sweden, and in Africa for sturdy plains game. The tapered, gilding metal jacket is scored at the nose for easy upset. Thicker at the shank, it is “soldered” to the core, resisting fragmentation when blasting through bone. A heavy heel resists deformation. In a test, Norma sectioned an Oryx’s front end so only the central third of the bullet remained attached to the heel. When that nose slab was twisted 90 degrees, it did not break!

More recently, Norma has announced Kalahari cartridges, with a new solid-copper, tapered-heel hollowpoint bullet. The scored nose opens readily; the shank drives on to scramble the vitals, tear muscle and shatter bones – then exit. A proprietary coating limits fouling. The sleek Kalahari bullets appear only in specially labeled Norma ammunition, which includes (with eight other chamberings) a 120-grain load for the .270 WSM. Kalahari ammo I’ve fired from the bench has turned in exceptional accuracy.

While the current list of Norma’s line includes the 130-grain Nosler Ballistic Tip load for the .270 WSM, only the 120-grain Kalahari and 150-grain Oryx loads fall under the NormaUSA banner. This pair gives the cartridge great versatility. From pronghorns across a broad stretch of prairie, to elk and moose in the alders, you won’t go wrong with a rifle in .270 WSM – and Norma ammunition! 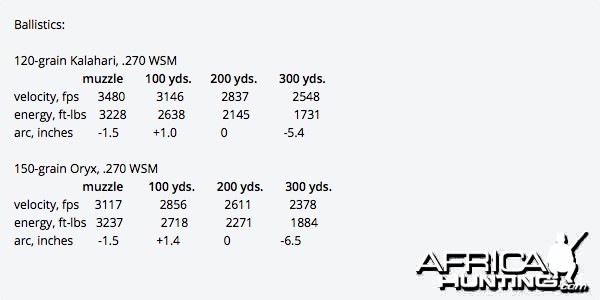 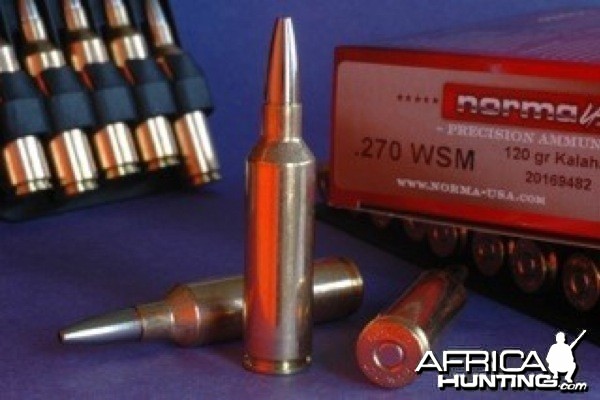 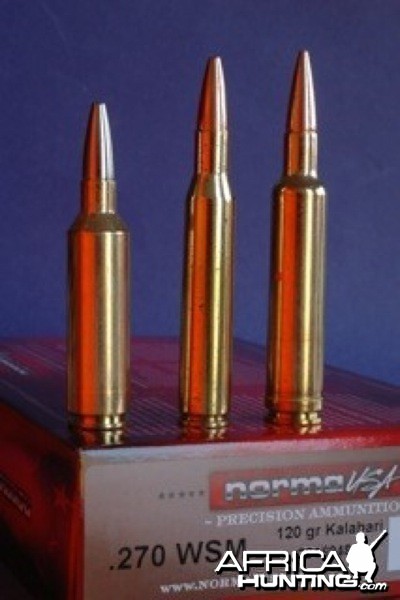 In search of 270 WSM cartridges