Well it's finally here, the trip I've been planning for two years to commemorate 30 years since my first African Safari with my then girlfriend, now wife Debra. This trip starts in the Eastern Cape, then moves to Zambia for a night overlooking Victoria Falls followed up by a houseboat safari on the Chobe River. Then to Dendro Estate with Shawn Bird for some hunting and finishing up in Namibia with Peter Thormahlen visiting the Caprivi Strip and Desert Conservancies.

We began in Houston with Air France, once again a very nice experience. This makes my second African flight with them this year and I continue to be impressed with their service. I will do my best to keep up, not always going to have wifi so there will most likely be some lag time between posts. An 11 hour layover gave us time to run into Paris and see some sights and have a great meal. When I have the extra time, I prefer to travel through Europe as it breaks up the trip a bit and gives me time to stretch my legs. 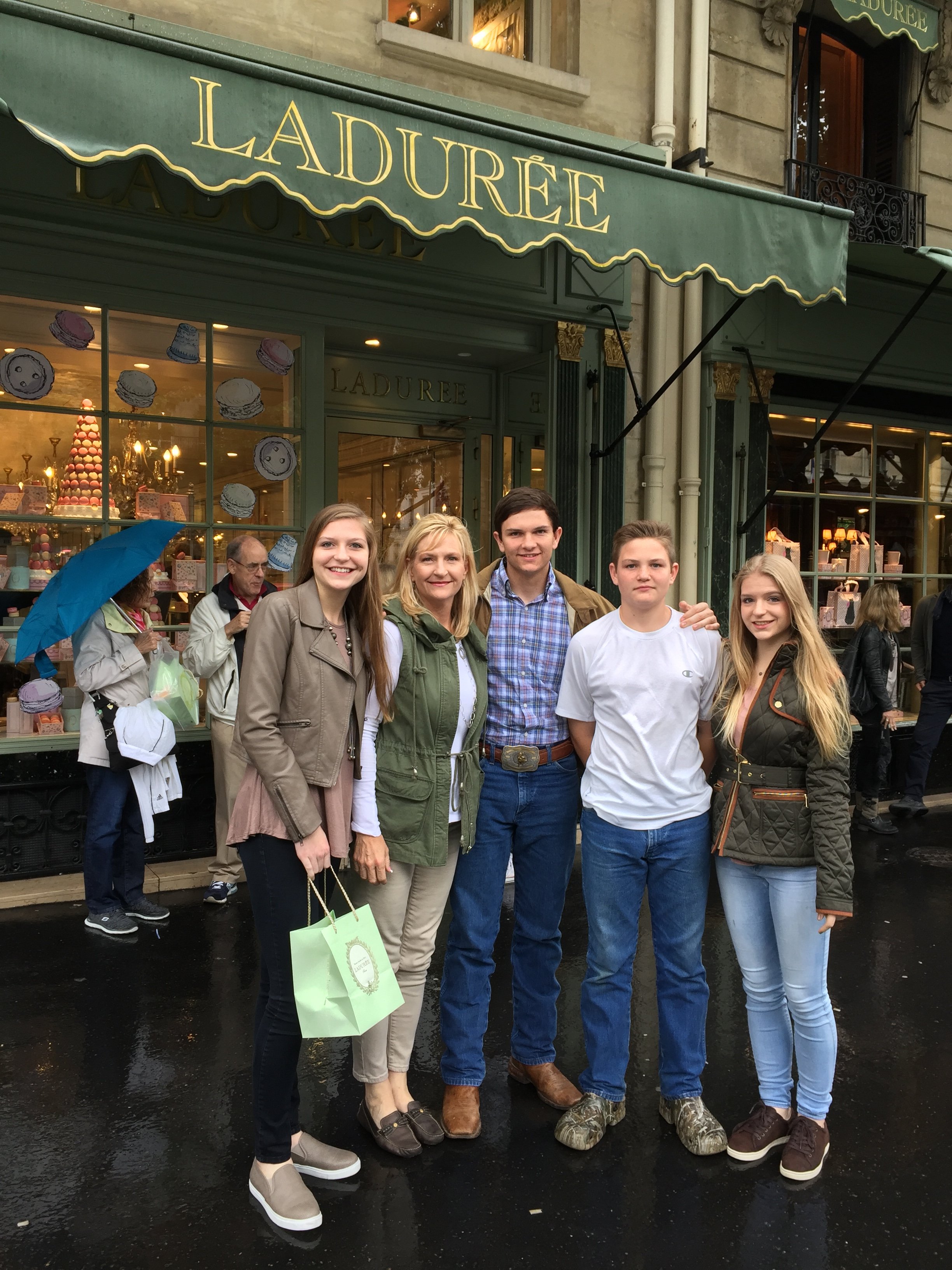 We arrived last evening and start hunting today with Swaershoek Safaris near Somerset East in South Africa. My old friend Niel Schoeman has made a plan for my four children so we will be off in search of a plethora of plains game. We are splitting up running two cars 2x1. It's been 9 years since my last visit to the Eastern Cape and it is still as lovely as ever. The game farming business is flourishing and the variety of species available now is amazing. This is the first ever African hunt for my daughter Bailey and son Parker, they are excited to say the least.
Last edited by a moderator: Jun 2, 2016

Are those camo Crocs your son is wearing? I need a pair of those.
Facta non Verba

looking forward to reading more about your time in Africa!
John 3:16

WOW! Five weeks and the whole family! I'm very happy for you sir! This is going to be a grand hunt report I'm sure!
You have a wonderful looking family......hope they get everything out of this adventure you have planned for!

Tough looking group there fore sure

Great looking group. Read the first part to my wife and she says, "can we go?".

Lrntolive said:
Are those camo Crocs your son is wearing? I need a pair of those.
Click to expand...

Yessir they are, bought them specifically to travel in and use as camp shoes! We're TEXAN, can't help ourselves sometimes. I can say that no one gave us any grief in Paris, even in the nice restaurant. To say we stuck out was an understatement.

Day 1 was great, sunny and 58 degrees this morning, I was in Heavan. I woke early but when the rest of the crew got up, the first smell was coffee and bacon! Now that's the way to start the day. 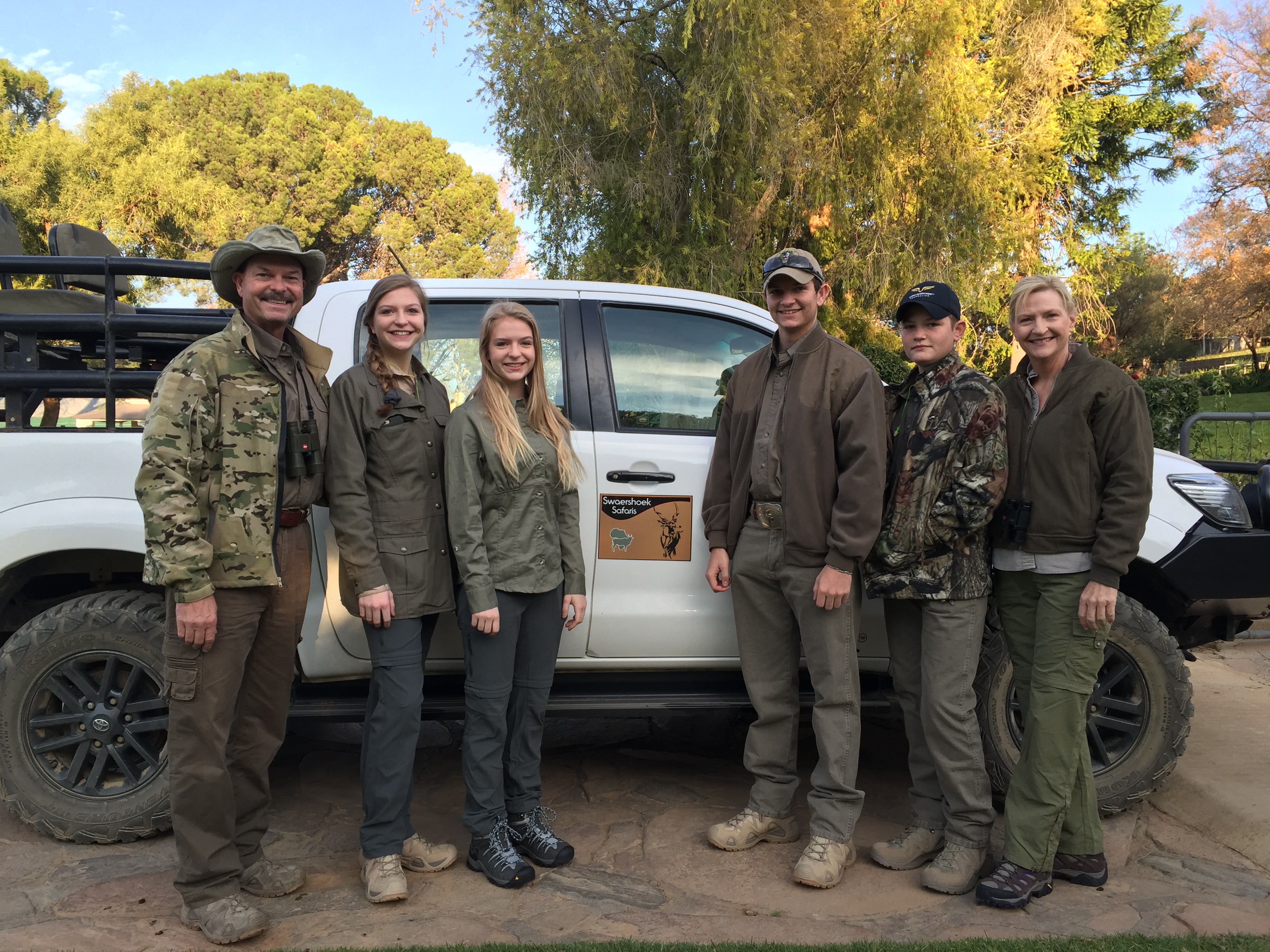 We saw tons of game, literally hundreds of head. My daughter Bailey shot her Blesbok just before lunch, after her third stalk she took a grand old ram. I'm so happy for her and let me tell you, she was pumped. 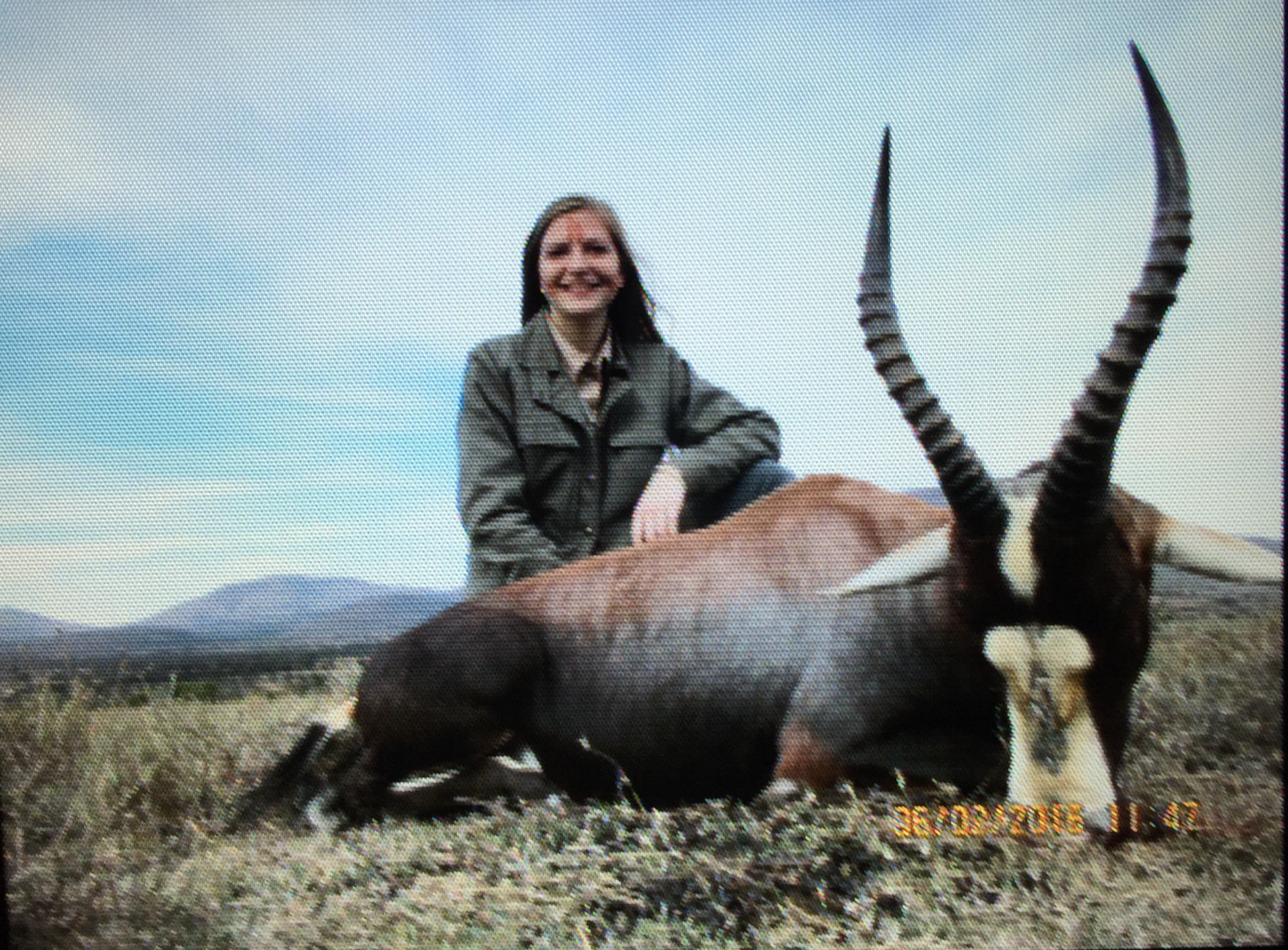 My son Parker and his P.H. Tyron Schulpfort had a long day, several stalks before lunch and no success. We headed back to camp for a wonderful lunch of braised springbok shank then went back for the evening hunt. By four in the afternoon we came across a superb springbok, beautiful horns with the hooks sweeping backwards. The shot was a bit far for a 13 year old at 220+ and he hit him a little far back but within a half our we got on him and put the finisher in. Now all of my family has taken their first African trophy! We capped off the night with a great meal, sharing the stories of the day and planning tomorrow's adventure. Next up, Jordan and Grant. 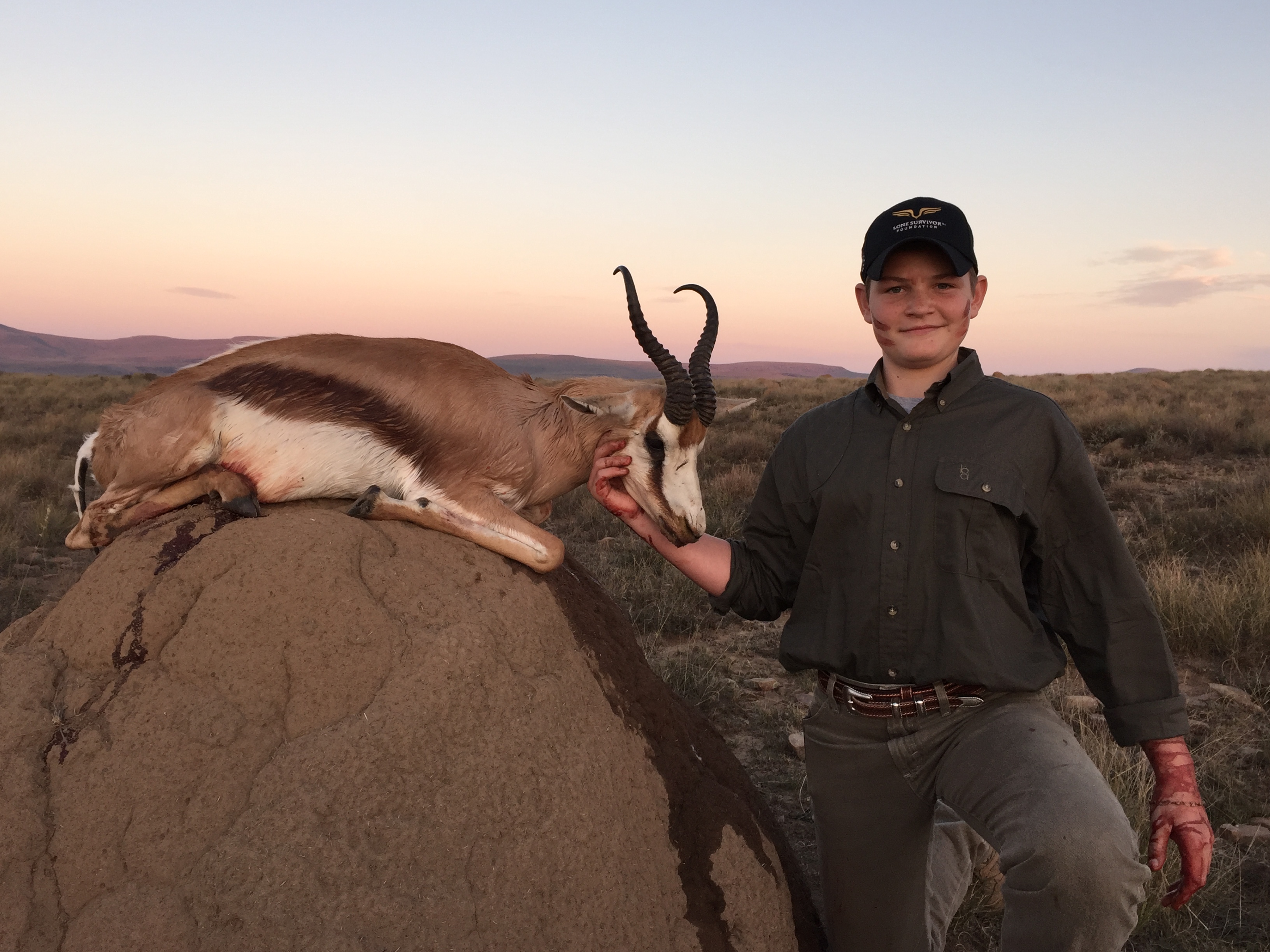 This is going to be a great report. Congratulations on your families first animals of the trip. Stay safe and be well.
Mike

Congratulations to your two youngest on their first African animals, JE.

Looking forward to hearing all about your adventure. This will be a must watched thread for me over the next 5 weeks.
And here I am, returning to Africa of many faces;.... the sloe-eyed temptress with flowers in her hair who stole my youth and my heart, and left me an old man with a kaleidoscope of conflicting memories of many dashed hopes and some fulfilled dreams. E. Echols

Great looking family and congrats on the first animals!!!

Funny, before I saw a blesbuck I had no interest in shooting one. There is a blesbuck now that wishes I hadnt changed my mind.
HUNTERS make importation bans work!

This is fantastic. And nice going on the Crocs! I used to live in San Antonio as a kid, so I've still got a little Texas in me. Can't wait to take my kids to Africa in a few years. I want them to take their first animals there.

Another great day starting off with a big breakfast and out to the veldt. I would be hunting with my girls today and Jordan was at the rifle first. We drove about 30 minutes and got the wind correct then started a slow walk along the rivers edge. There was a fair amount of game out but it was windy so made them a little more spooky. We encountered Fallow Deer, Springbok, Mountain Reedbuck, Kudu and a very nice Waterbuck Bull of 28"+. Finally found a suitable Springbok ram and began the stalk. Well, 3/4 of the way through it some Mt. Reedbuck spooked and ran past him so he was gone! Oh well, that's hunting, a 2 hour walk and at the final 500 yards it was busted. We drove another couple of K's and managed to spot 3 Springbok Rams with a nice mature trophy amongst them so the stalk was on. We ran out of cover in about 45 minutes so Jordan was on the sticks having a look. Our P.H. Is my old friend Niel Schoeman who is the founding partner of Swaershoek Safaris. Niel coached Jordan well and she put the ram down with a single shot from a silenced Sako 243, +/- 180 yards, I was so proud of her. 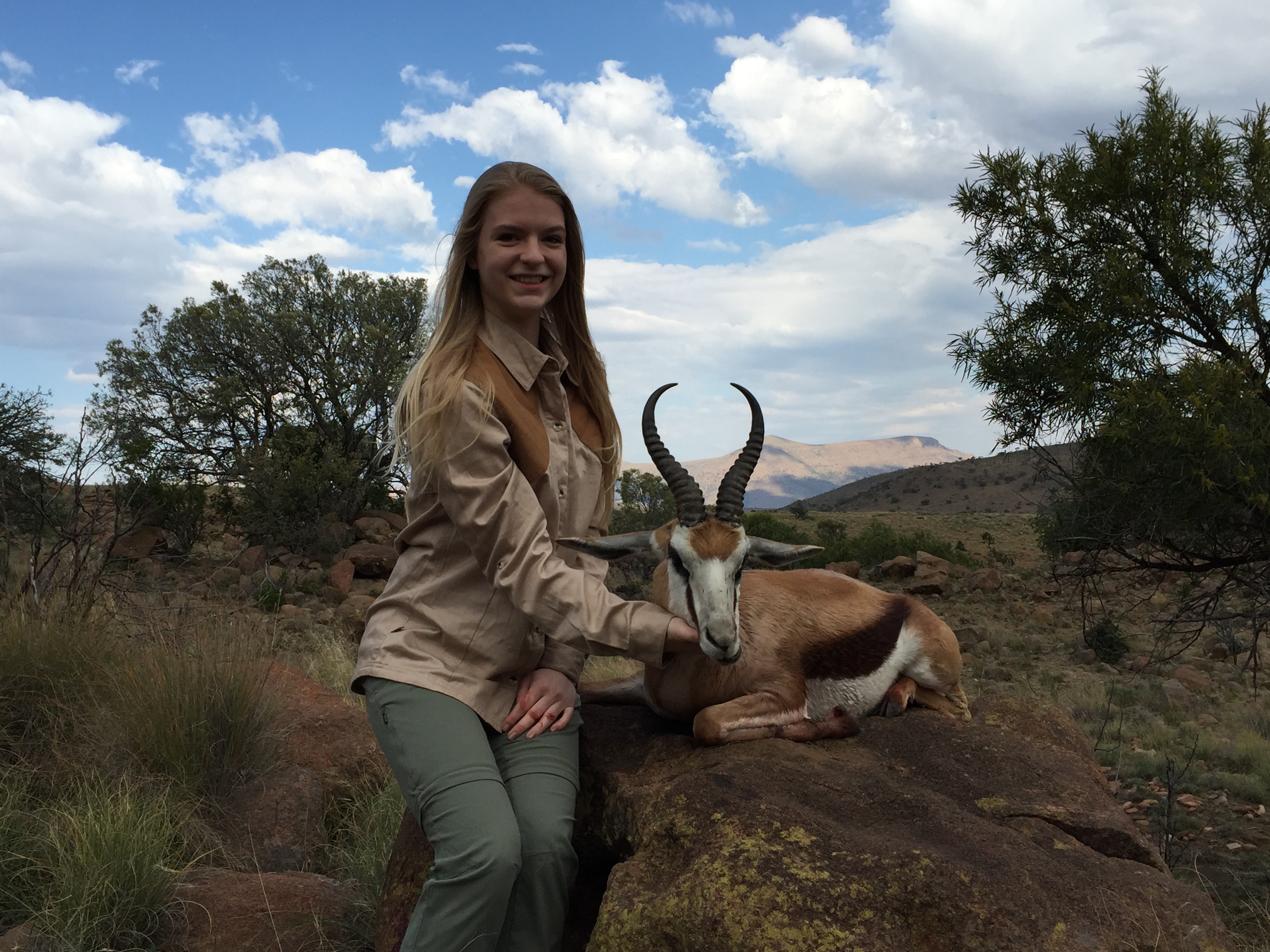 It was after 12 when we finished with photographs so we were headed back for lunch. As we topped a ridge into the next valley we hear a short ant the "thud" of a hit. We glassed across the valley and 1000 or so yards away were my sons and their P.H. Ty. Niel was on the radio and found out they were trailing a wounded Red Hartebeast. The decision was made to give her some time and let her lay down so we were going to drive up and get their rig and take it to them to save the 1/2 mile walk. Before we got to the truck we spotted the Hartebeast and I was able to finish her off. My son Grant was happy with his trophy but immediately apologetic about the poor shot. I told him "son, if you hunt enough it's going to happen so don't let it bother you". I used Niel's silenced 243 and let me tell you I'm hooked. Buying a silencer is on my to do list when I get home.
The second Red Hartebeast was taken earlier in the day. 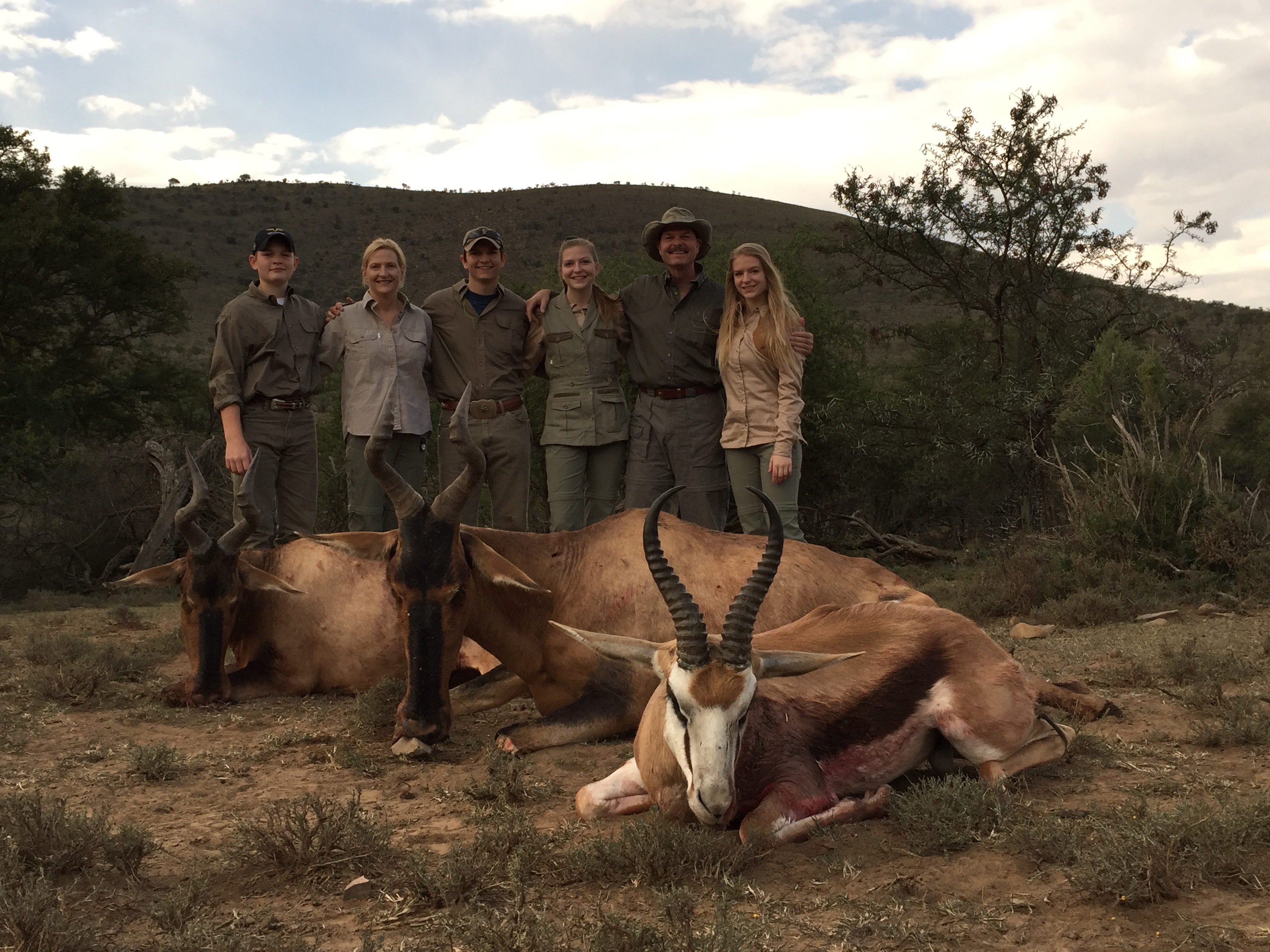 By now it was 2:30 so we had a quick lunch and were back out. My son Parker went with Ty in search of Eland and Niel, Bailey and I went after whatever we could find. With sunset a little after 5, the shadows come fast in these mountains at the end of the day. Not 15 minutes into the drive we spotted some Waterbuck and upon quick inspection Niel and I could see the bull was exceptional. At nearly a 1/2 mile away we almost simultaneously said "he's huge". The stalk would be perfect, we had the wind and we used a small drainage to start off, skirting the small hill he was bedded on. It took us nearly 30 minutes to close the distance to within 250 but the bull had moved into some heavier cover. He bedded down again looking our direction with a tree trunk dead center of his face so he never saw us. Niel set up the sticks, we were about 175 and Bailey had a look through the scope. He had brought along a custom 270 to have more knock down power for a larger animal. Niel looked over and said "this could take 2 seconds or never". Thinking about it I asked Niel if he wanted me to walk off left hunched over and when I see the bull stand slowly to get his attention. Well it worked perfectly, I was about 50 yards left when I saw the bull rise from his bed and Bailey settling in to the rifle. I put the video camera on and it seemed like an eternity, she wasn't shooting. I could see they were in some dialogue and that long period of time before the shot was probably less than a minute. The only shot she had was between two tree trunks and that was a shot she had never taken before. I saw Niel plug his ears so I was on the bull with my camera. The shot rang out and I saw the bulls front legs come off the ground, he was slightly quartering towards her and she made a perfect shot on the shoulder. While Niel was congratulating Bailey I could hear the crashing of rocks not far off so I know the bull was bailed up. He went maybe 50 yards from where he was standing and was stone dead - heart shot. There were lots of pictures and congratulations, Niel said this was probably the best bull of the year at just over 30"! I told Bailey "you don't know what you have here, in 30 years of hunting Africa I've never seen a bull this big". To say she was excited was an understatement. While we waited for the truck, she admired her trophy, every square inch of him just walking around him, touching and holding him. It was nice to see the true respect she had for her trophy that she had earned that day. 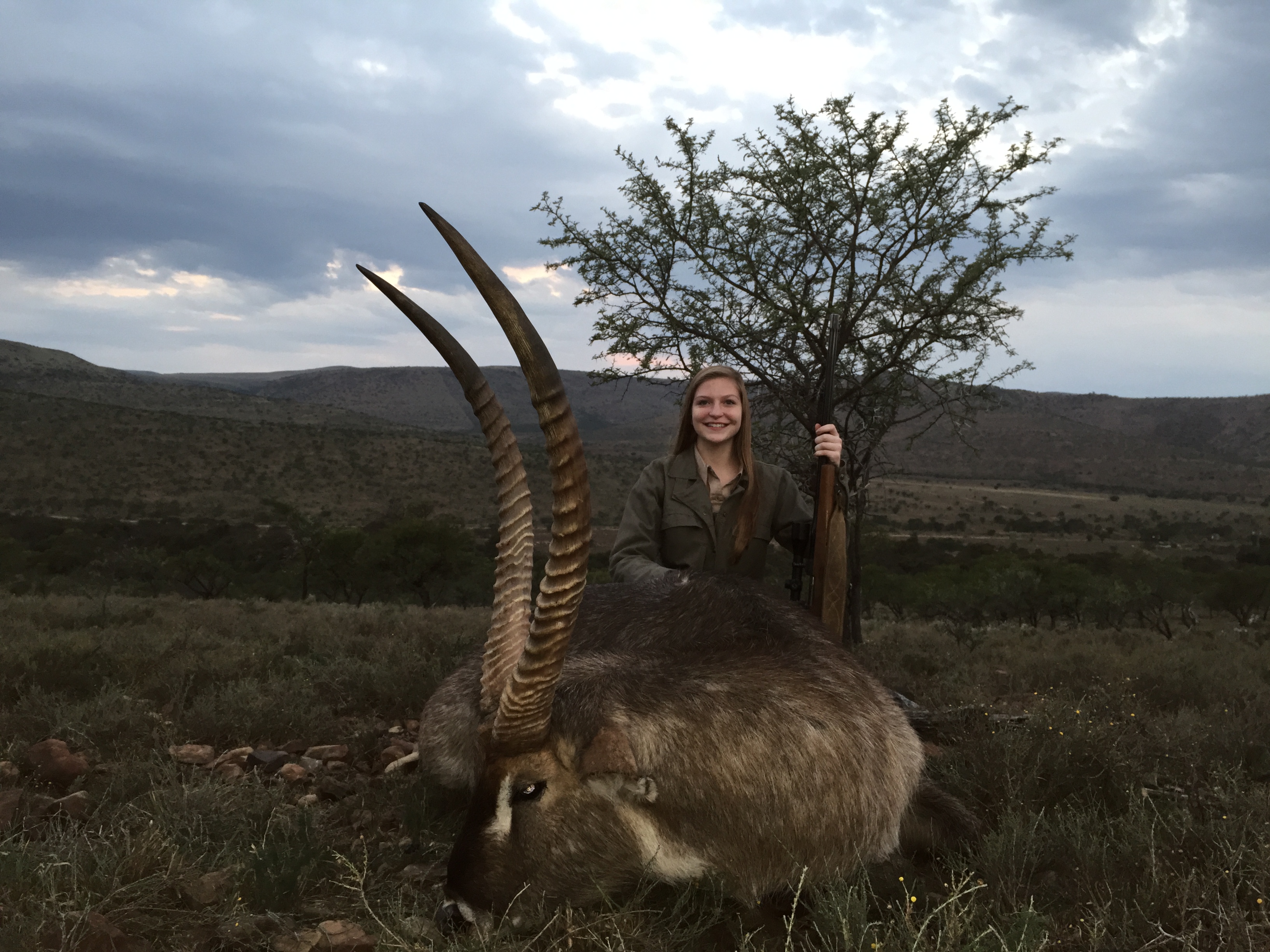 Awesome Waterbuck! Congratulations to you and your daughter.

Nice first day! Congrats on the all trophies and memories with the family!
John 3:16

Awesome report so far! Very cool that you are getting to enjoy Africa with your family.

Awesome waterbuck. I'm really thinking I need to hunt one of those on my upcoming trip!

Looking forward to hearing how the rest of your adventure goes!

That is a fantastic waterbuck. Congratulations to all on a great day.

Waterbuck has always been a favorite animal of mine. That is very nice trophy, congrats!

looking good
You must log in or register to reply here.