Sorry for the delay, long days and haven't had a chance to sit down! After the great day taking Bailey's huge Waterbuck we went to dinner at my old friends Tollie and Karen Jordaan of Tollies African Safaris. It had been 9 years so it was good to see them and catch up. The next morning we were all up and ready to go, Parker after Eland and Grant after Black Wildebeast. I would be with Parker today, Grant with Debra and their P.H. Niel. About an hour into the morning we spotted the herd of Eland up in a small valley so we got the wind and made a stalk. It was perfect, we were 200 yards away, across a small draw and they had no idea we were there. Now just the waiting game to see if the right one was there. After nearly a half hour and a shooter not spotted, Ty saw a nice old Mountain Reedbuck so the plan changed. Parker settled in from the prone position and made a perfect shot on a great old ram well over 8". We headed back to camp for a quick lunch and would go out again for the afternoon hunt. 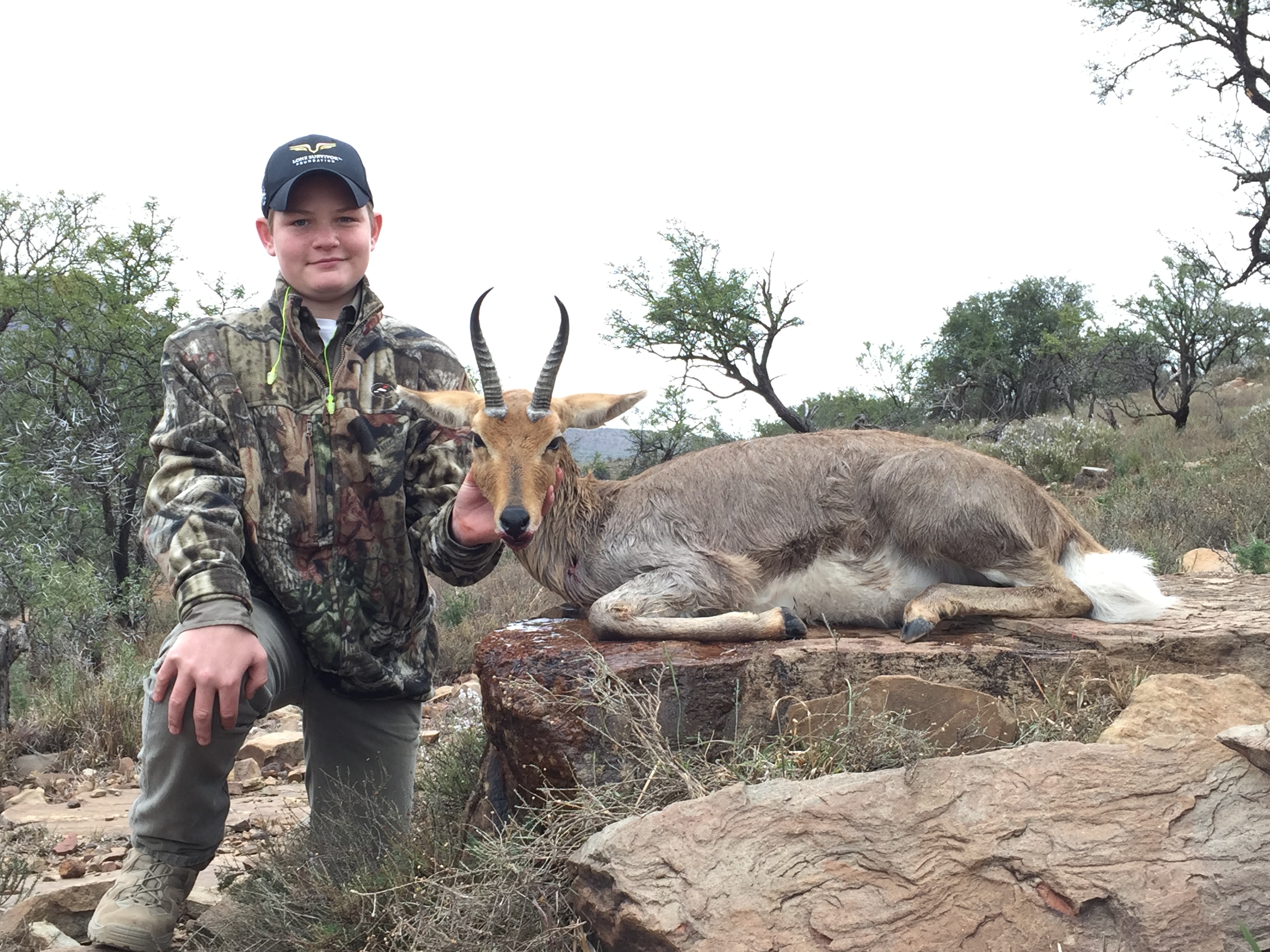 We never got on the Eland again that day and we're back in camp right at sunset. Grant was successful on his Wildebeast hunt after a nice 75 yard belly crawl and a 200 yard shot. This was a fitting end for Grant and Niel as they had tried to score on a Black Wildebeast back in '07 but were unsuccessful. 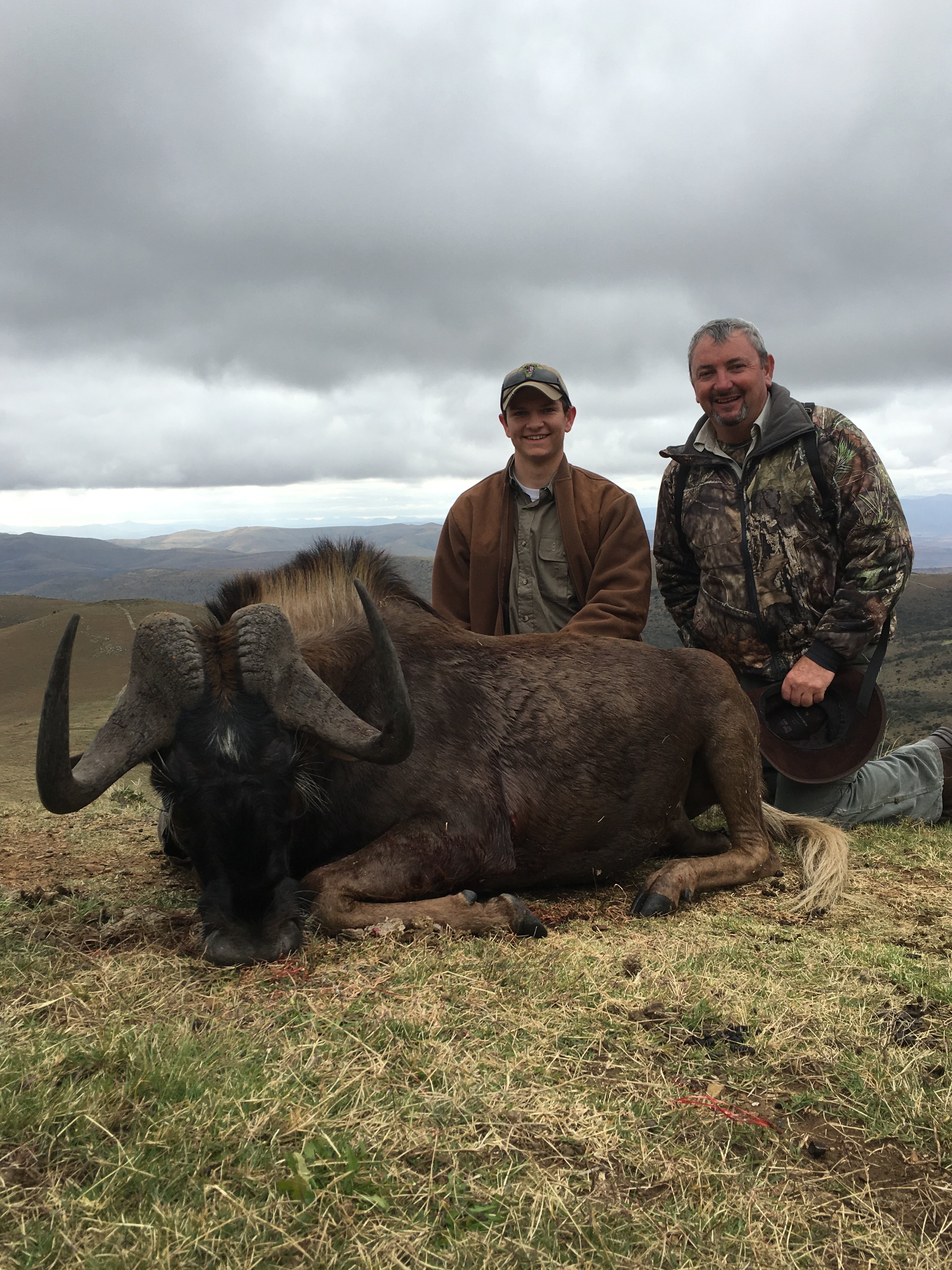 We were back at it, Parker after Eland and Jordan after E.C. Kudu this morning before changing camps. As hunting goes, no luck so we made our way back to the house for our final meal in the garden then moved to the coastal camp near Alexandria. 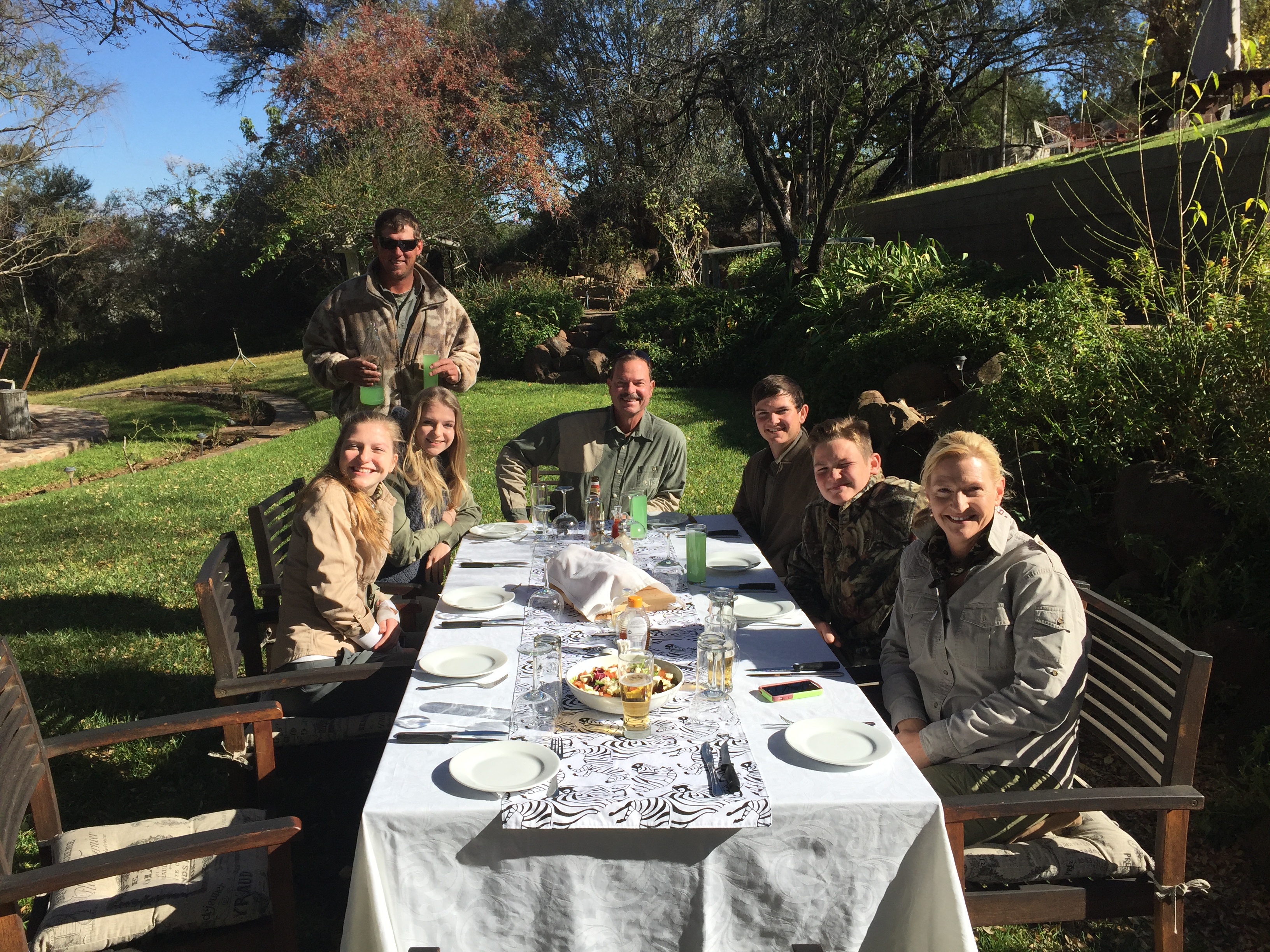 Today would be Warthog only day, well at least that's how it started. We were off to a farm near Bedford and the weather was perfect, clear with very little wind and warming nicely so the pigs were active. Everyone scored plus a couple of extras. Jordan managed to pick up a nice Fallow buck in the afternoon and Debra capped it off right at sunset with the biggest boar of the day. Grant had the longest shot at 250 and Bailey would have had the closest at 5 yards but the rifle misfired! 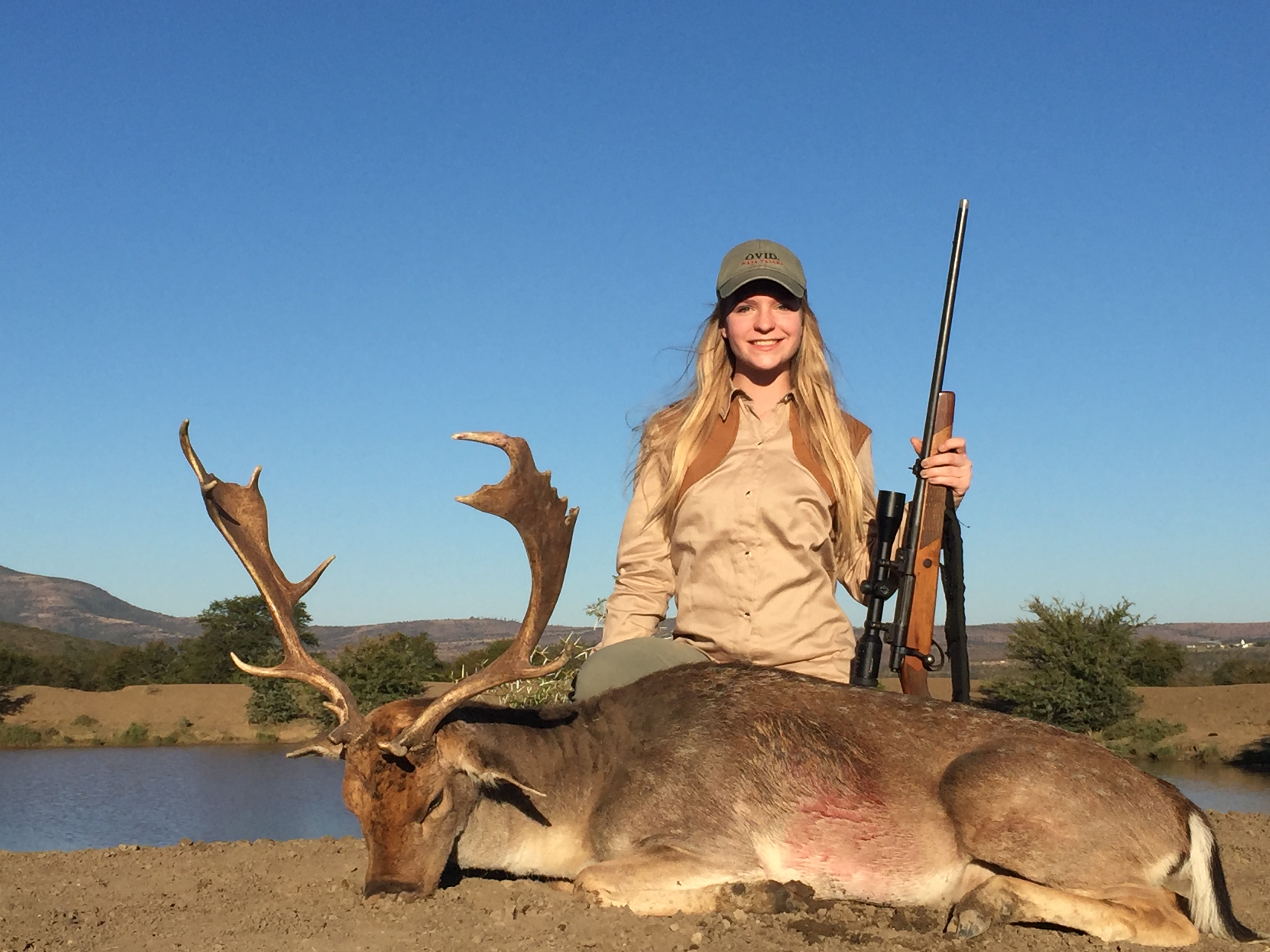 All Warthog's were taken with one shot, there was only 1 miss for the day. The final score on the pig hunt - Stepan's 9 Pigs 1! 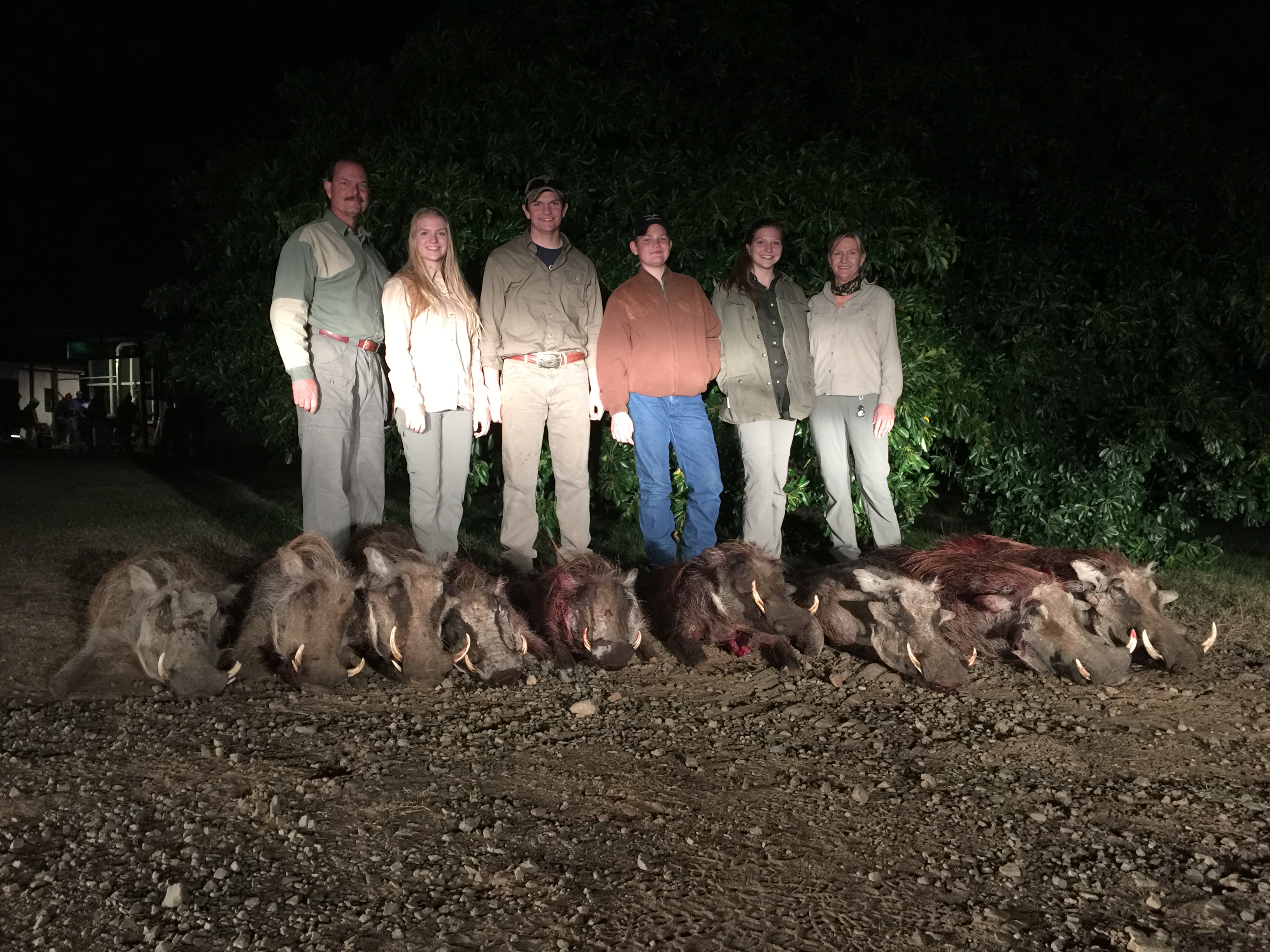 Now that is a fine collection of warthogs! Well done.

Great report and looks the family is having a fun time.

Looks like a lot of fun. Always fun to see lots of animals and to get some shooting in. Congrats. Bruce

What a fantastic time! Congratulations on a fine beginning. Love the warthog line up.

Fantastic waterbuck! Took me three safaris to finally get mine, great job by the young Huntress.
Y'all can go to hell, I'm going to Texas! Davy Crockett

Today's lineup had Bailey after Impala and Zebra, Parker after Zebra and Bushpig, Grant and Jordan after Blue Wildebeast cows. As you can see, we're mixing a bit of culling with trophy hunting. Unfortunately the drought has hit the East Cape so herd reductions are taking place all around. After the 7 year drought in Texas, I can relate to their concerns. But as with all droughts it'll most likely break with a flood such as in Texas now. So their time is coming and the rains will be back, just another natural weather cycle.

Bailey was first up and after looking over several Impala Rams a nice male was found and the stalk unused. We here able to use the terrain and some bush to close the distance and she made a nice 150 yard heart shot. Now only Parker and Grant the only ones in the family without an Impala but I have no doubts that'll get sorted out in the coming weeks! 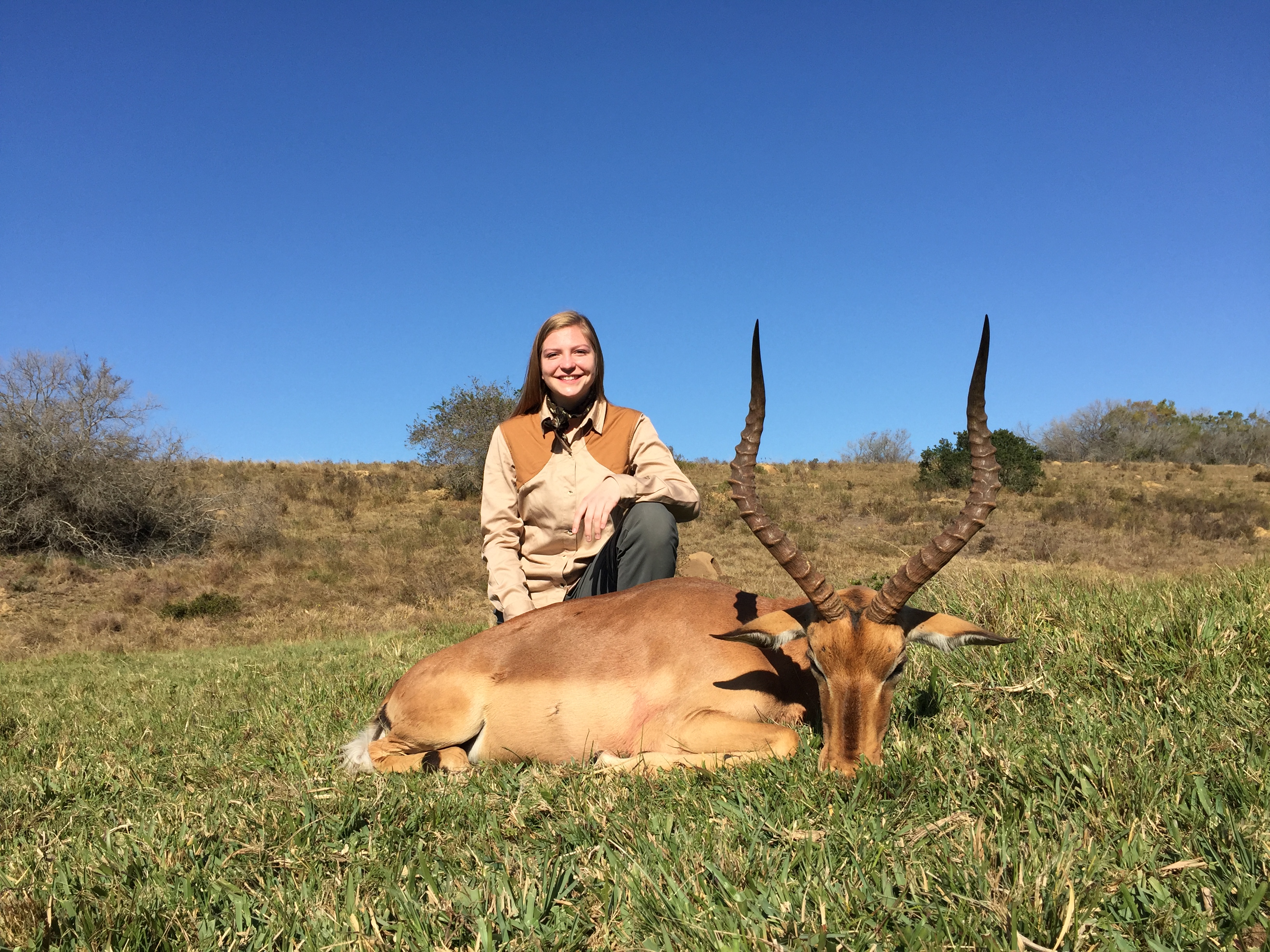 Parker was up next after Zebra and we set up in some cover near a dam and did a short drive. About 45 minutes later the herd was drifting past us at about a 150 yards totally unaware of our presence. As they scattered out the stallion was identified and when he stopped Parker made a perfect shot, quartering away so through the the heart and broke the opposite shoulder. The Zebra was down in less than 75 yards. 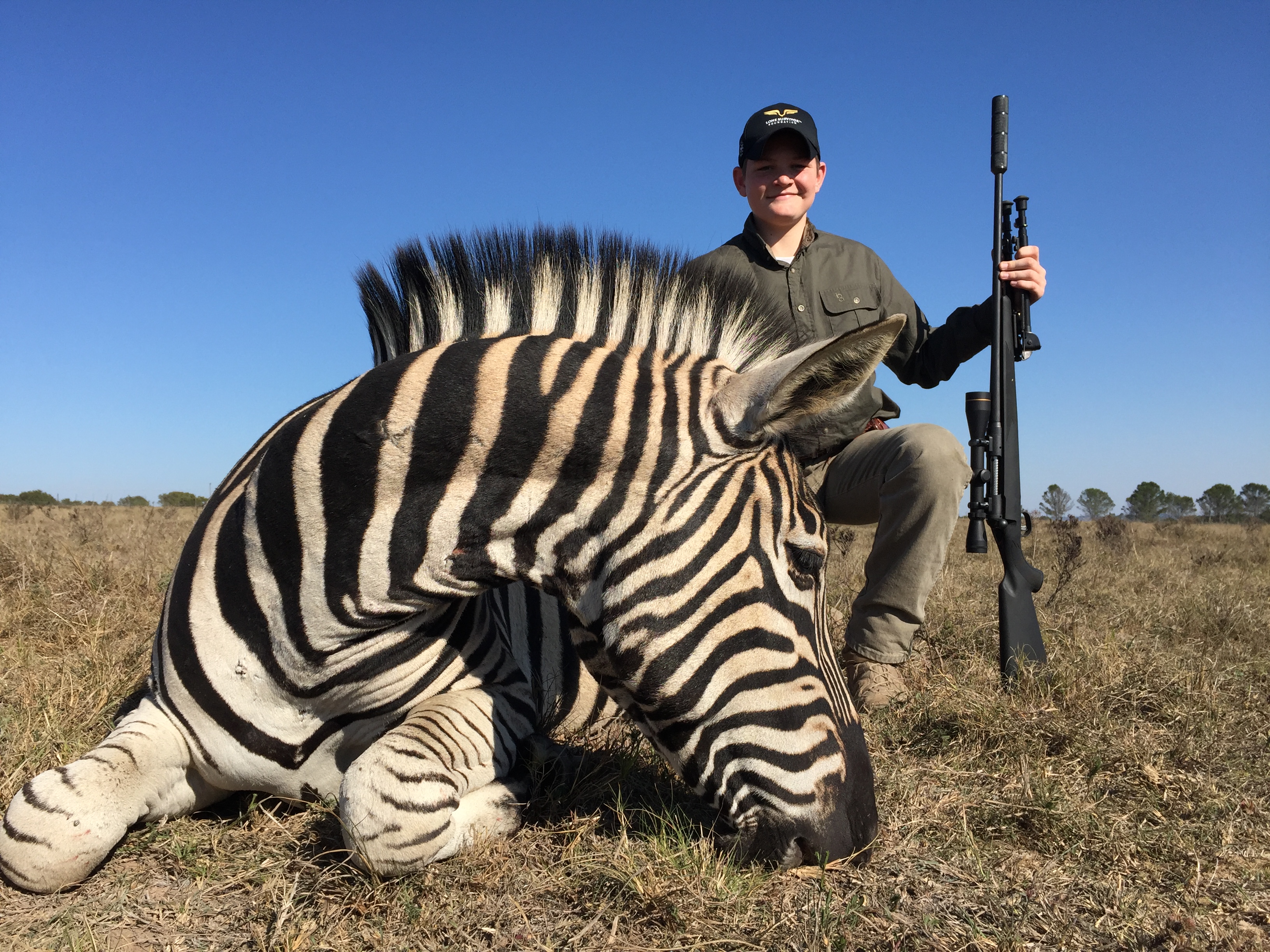 We all met up at the lodge for lunch and were back out for Bailey's Zebra hunt. The herd was spotted off in the distance so a plan was made to close the gap. We used the terrain and some cover to move within 200 yards. As the herd grazed and milled about, the stallion made his way a bit closer to us. Finally, Bailey got her shot and took the old guy at 180 yards with a 3006. Once again, a single shot and the stallion was down within sight! 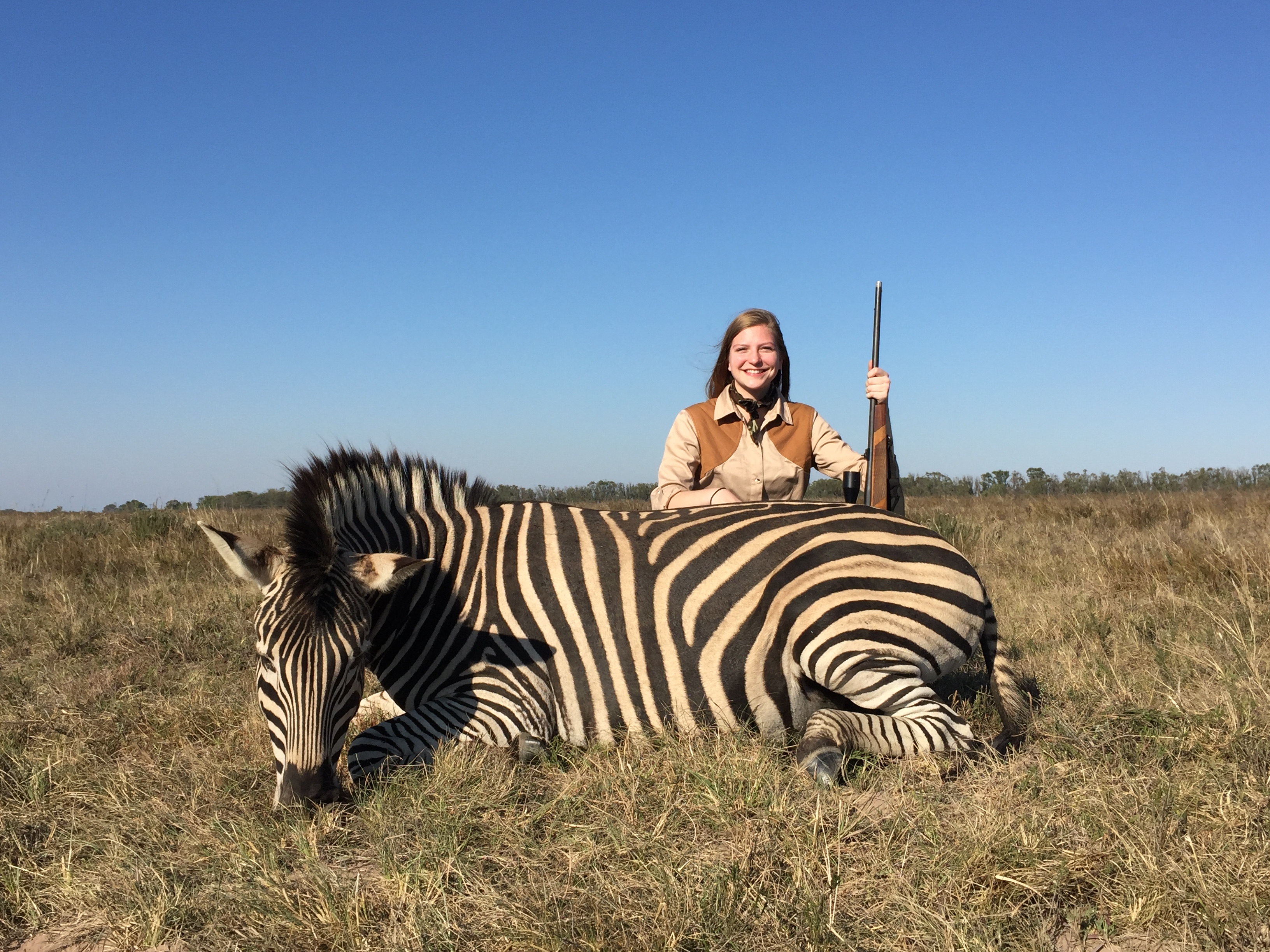 Grant and Jordan were off with Ty after Blue Wildebeast cows and were lucky to score early in the day. Grant shot a nice bull when it presented itself so the "culling" was out the window. Jordan hunted all the way to lunch and again in the afternoon then finally connected with an old cow just at sunset. 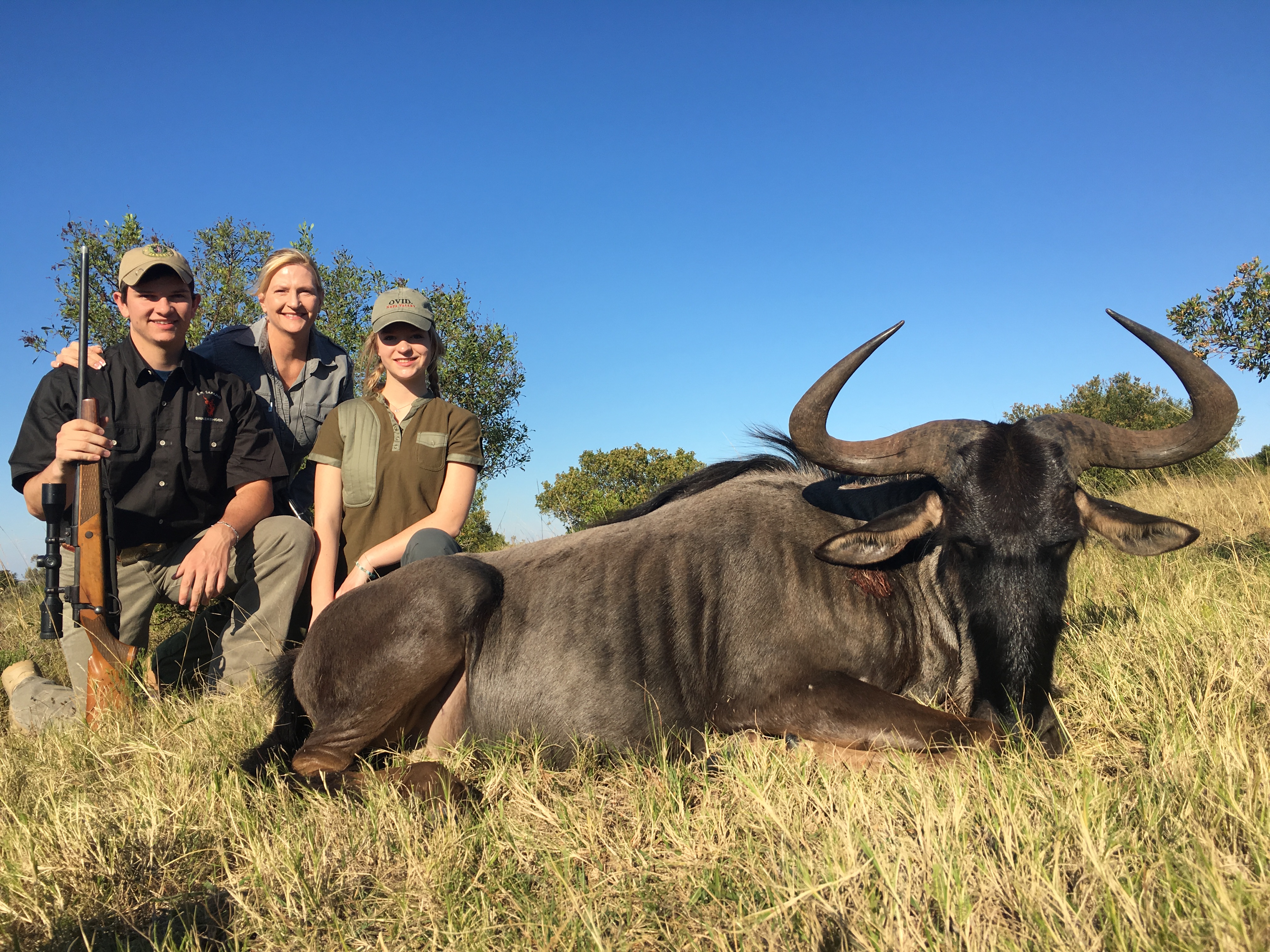 Jordan, Debra and I along with our P.H. Ty went in search of Blue Wildebeast this afternoon. We spotted a herd across a large valley and made our way across to begin a stalk into the wind. The herd drifted towards us and unfortunately we spooked them and they were off. We headed back across the valley and as we broke out of the heavy cover we could see the outline of horns on the skyline above us. We made a short stalk and spotted the herd. Ty put up the sticks, lined Jordan up and she shot just as the herd broke. A solid double lung shot and the old cow ran about 80 yards and was down. 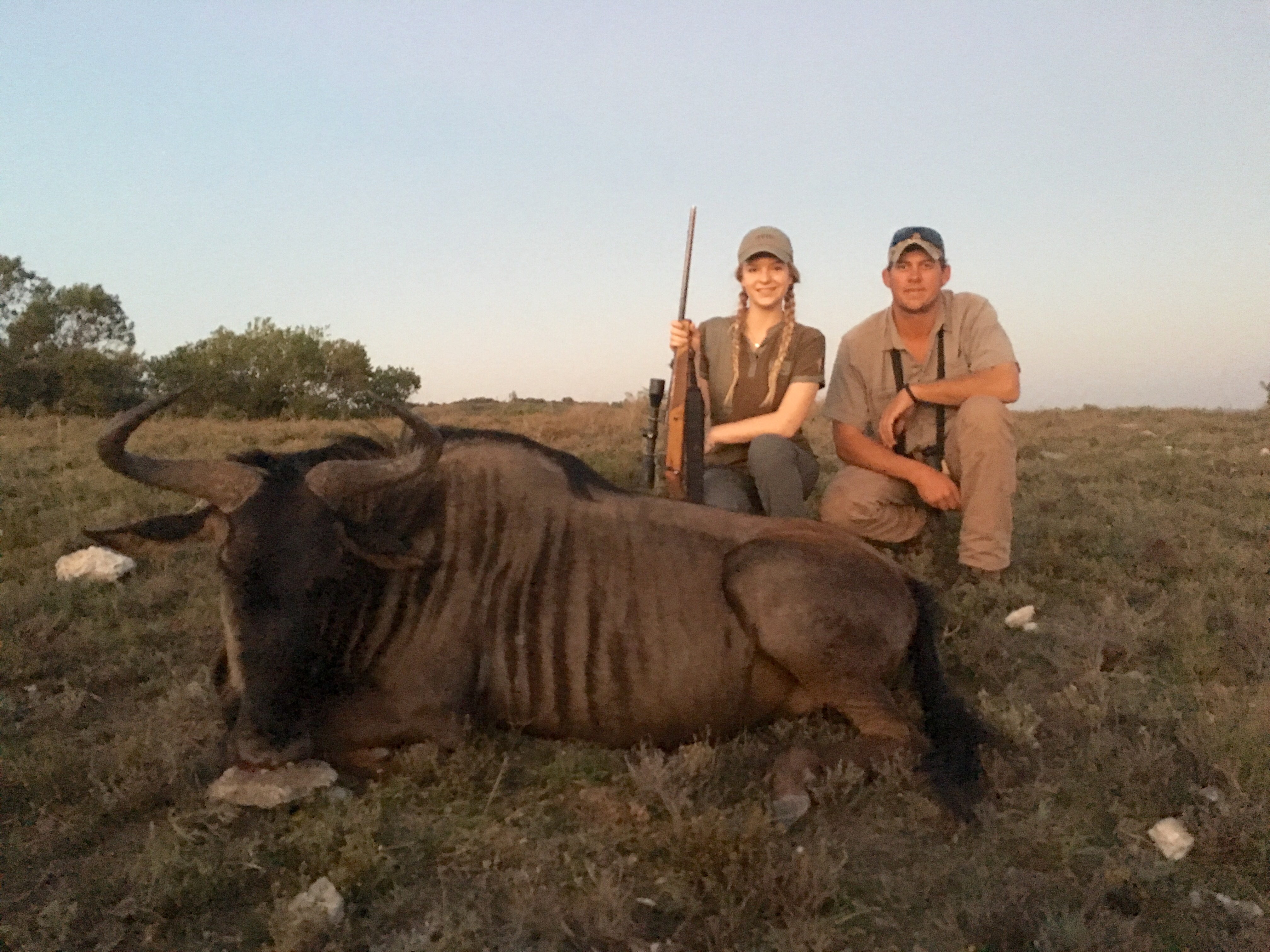 We hurried back to the lodge then Parker, Willem and I were off to a Bushpig bait at dark. We drove about a half hour and met the farm owner at the gate and made our way into the property. We stalked up on the bait in the pitch dark, moving quietly but the wind was swirling a bit so no luck. We moved about 10K's to another property to check a bait and the wind was poor so no luck there either. By 8 O'Clock we were on the last bait, constantly checking the wind. About halfway through the approach we stopped, backtracked and came another direction to get the wind right. As we got within a couple hundred yards of the bait I stayed back so Parker and Willem could make the final approach. Finally I saw a flashlight come on and the crack of the silenced 243 but no report - a miss. I put on my light and shined across to where the pig was running and heard the crack of a shot followed by a thud - the hit! The pig was still running and just as it stopped he hit it again. We looked for nearly an hour, found good blood so decided to come back in the morning to follow up. I was convinced he would be dead and assured Parker we would find him. Sure enough, with the Jack Russel named Chase in the lead, the old boar was quickly found, stone dead. 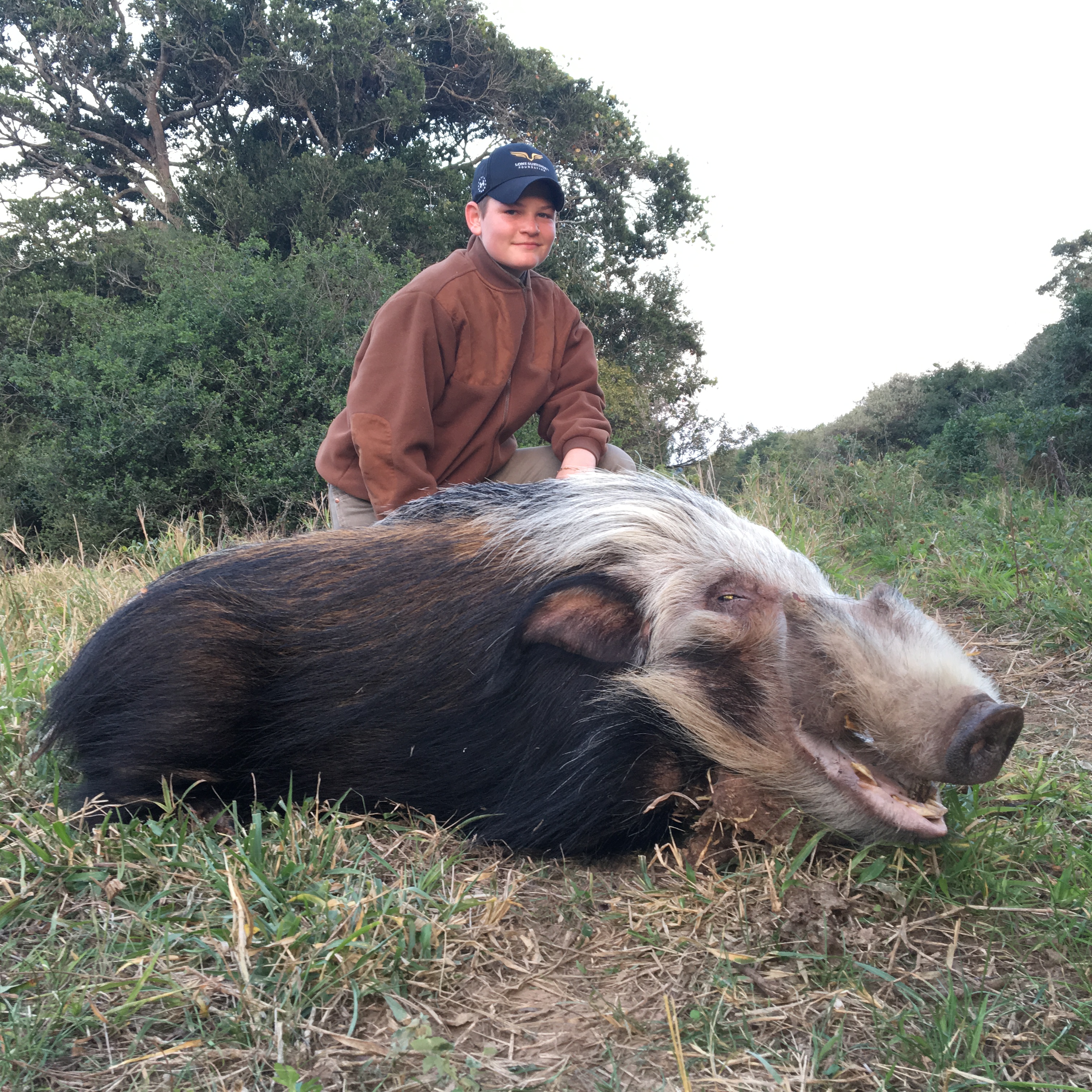 We left Alexandria and went to vistit our old friends Rufus and Anne` Dreyer who are dairy farmers on the coast near Humansdorp. After a tour of the Dreyer boys school in Port Elizabeth, Grey High School we went to the farm. Immediately we headed for the coast, the family is blessed to own a beautiful stretch of unspoilt beach that was absolutely amazing. Anne, Rufus, Debra and I enjoyed drinks watching the sunset while the boys surf fished. What an incredible place, such a beautiful beach in its natural state. Here is Rufus and Parker with his catch. 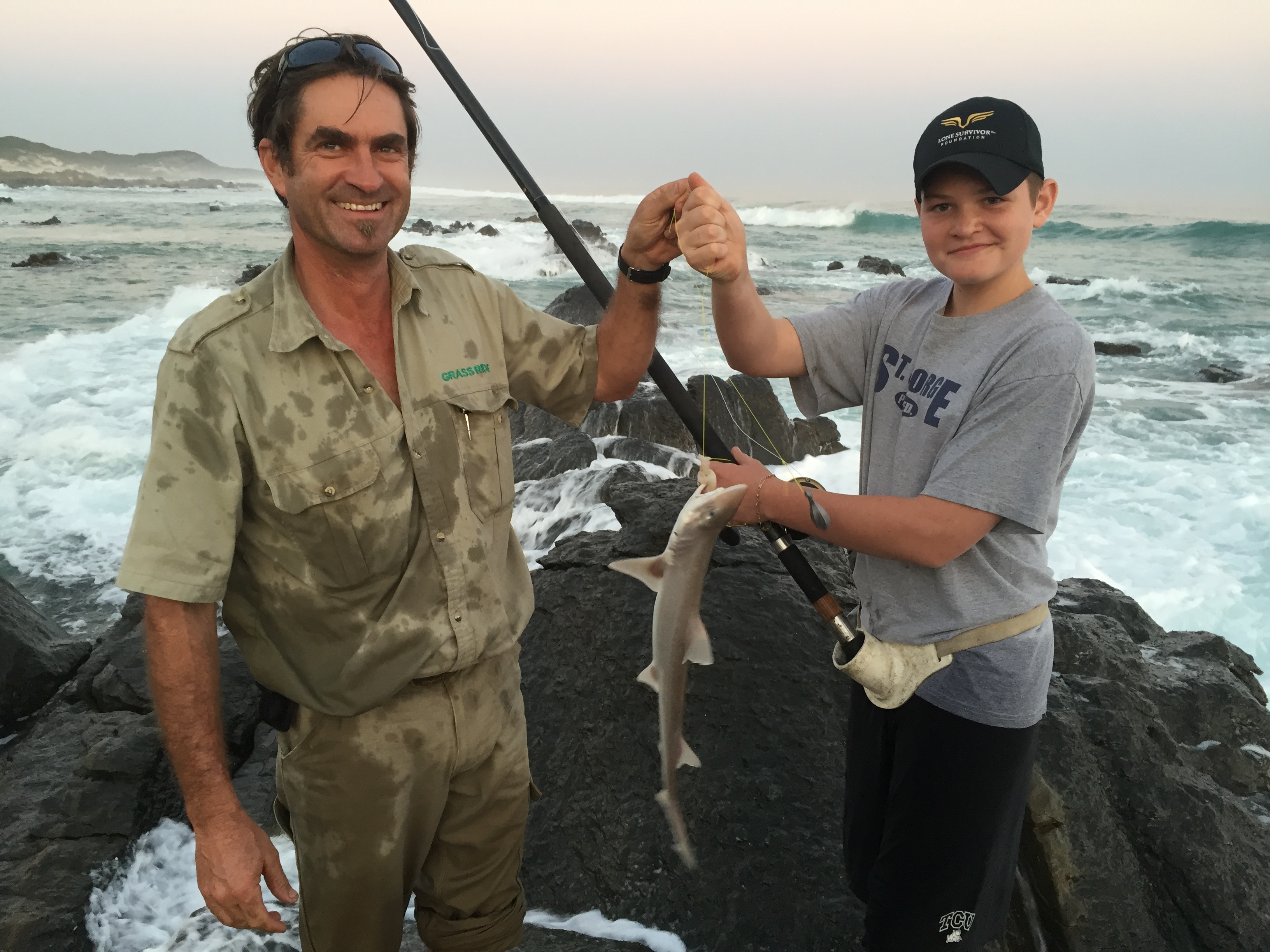 My trophy this day! 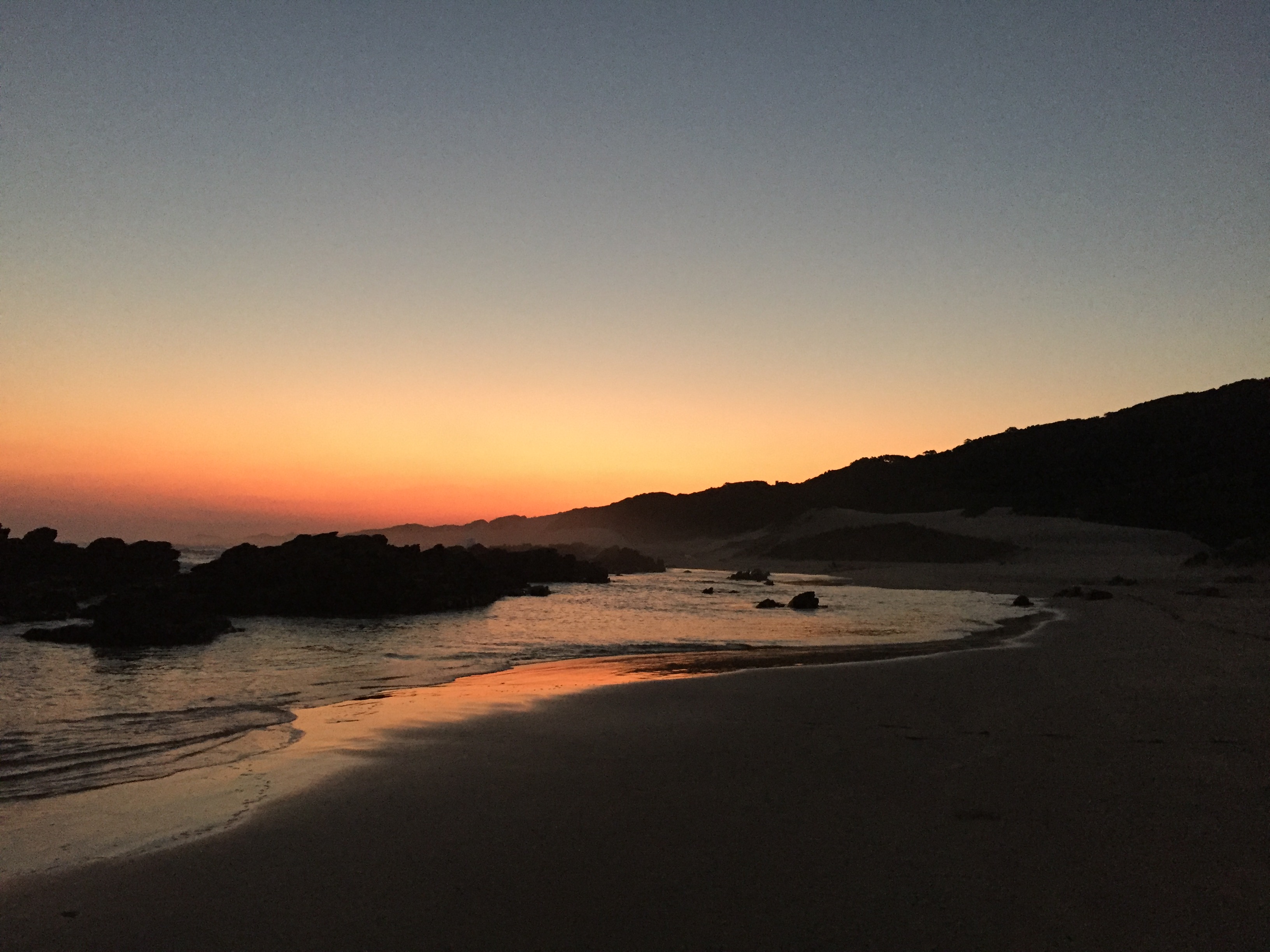 We were up early this morning to go to the milking parlor and see how business was done. The technology behind dairy farming is unbeliveable. We learned so much and I'm sure my kids will have a better respect for a glass of milk after seeing all the effort that goes into producing a high quality product. Rufus is an accomplished pilot and surprised my family with an aerial tour up the coast in his Cessna 210 today. What a site to gaze upon the pristine, undeveloped coastline then back across the emerald green pastures full of dairy cows. 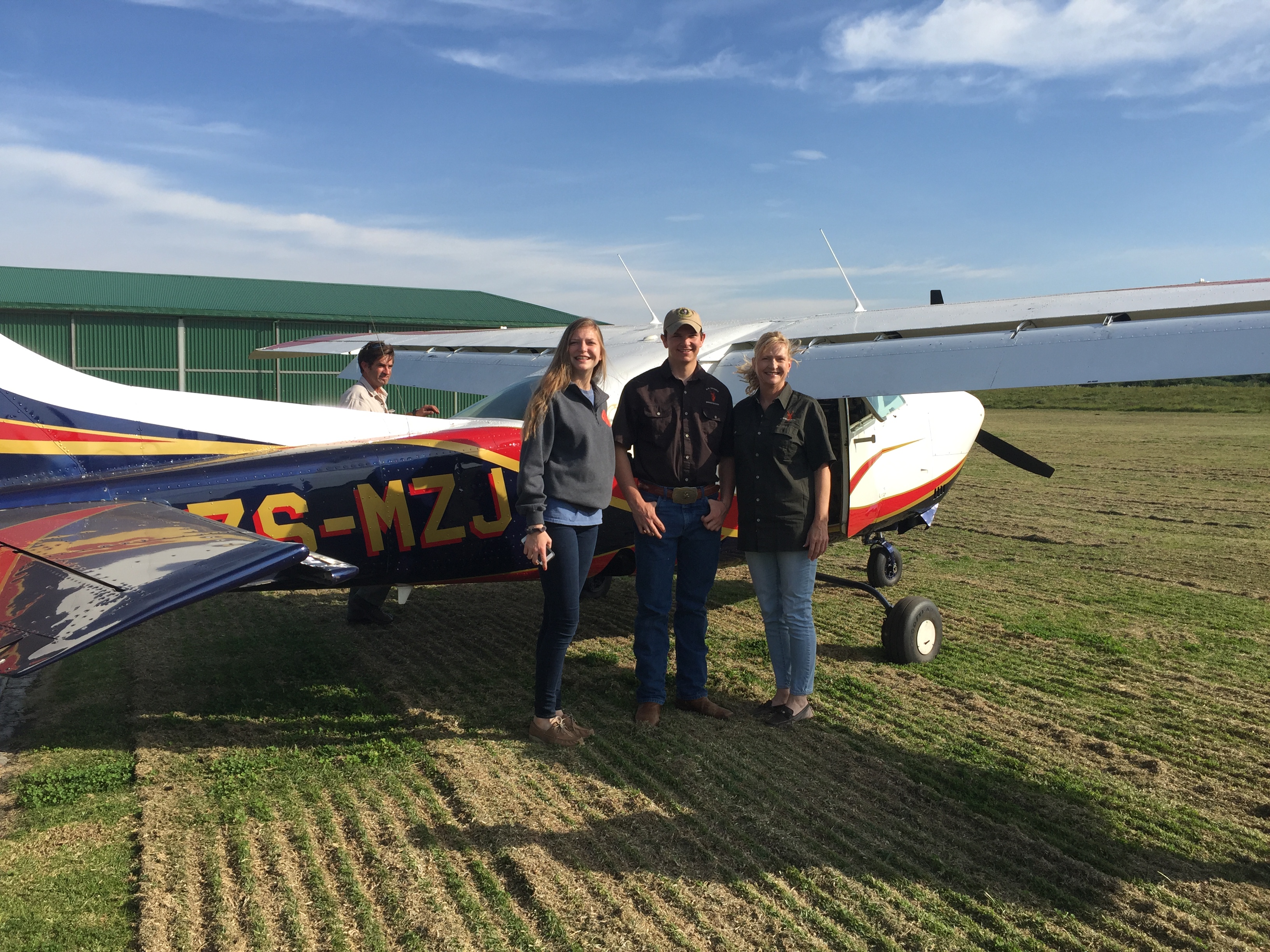 Anne' prepared a traditional Afrikaner lunch of Bobotie with a great bottle of Red Wine from the Cape. I love this country! 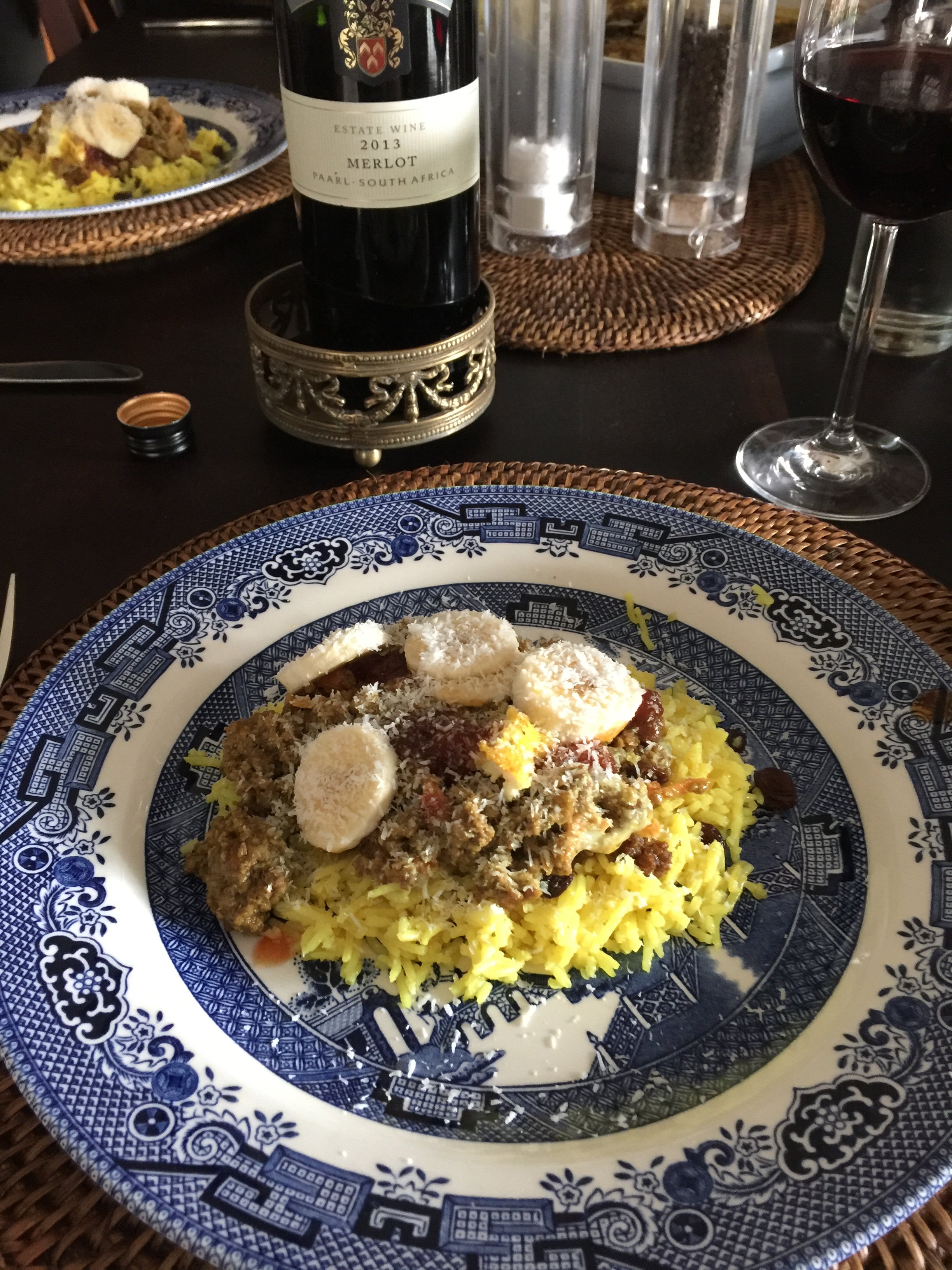 Any photos of the coast from your flight?

Nice photos, and what a great bonus to take that flight!
John 3:16

As always, the food has been great. I did get some aerial photos but have to figure out how to get from my camera to my iPad!

JES Adventures said:
As always, the food has been great. I did get some aerial photos but have to figure out how to get from my camera to my iPad!
Click to expand...

JES,
I am available for adoption. I don't eat much, house trained but I drink the hell out of some scotch! You really wouldn't even know I'm there.lol. Great trip so far
Cody
"Montana seems to be what a small boy would think Texas is like from hearing Texans" John Steinbeck

What an absolutely fantastic trip. And your entire family are obviously very accomplished hunters. What a great opportunity you have bestowed on you kids.
"When my friends tell me that I have led a remarkable life, I have to admit having done my best to make it so" - John Kingsley-Heath

Great job, Dad! You created some memories that your children will treasure for the rest of their lives.
Frank

Wow what a trip! Family style......can't think of anything better. Congrats and thanks for posting the fantastic pics and story.

@JES Adventures whens the next update and which country are you in now?

Thanks everyone for the kind words, it's been an adventure let me tell you. Just keeping four teenagers (2 boys and 2 girls) from fighting has been a chore! Fortunately I have kept them busy so no one was sent back across the pond early for causing problems.

Here we go, I am in the Johannesburg airport and have wifi for a bit so I'm going to upload what I can. It may be the 6th before all finished as I have kept the diary while without Internet.
You must log in or register to reply here.