Making the first benchmark
It all started with share luck. 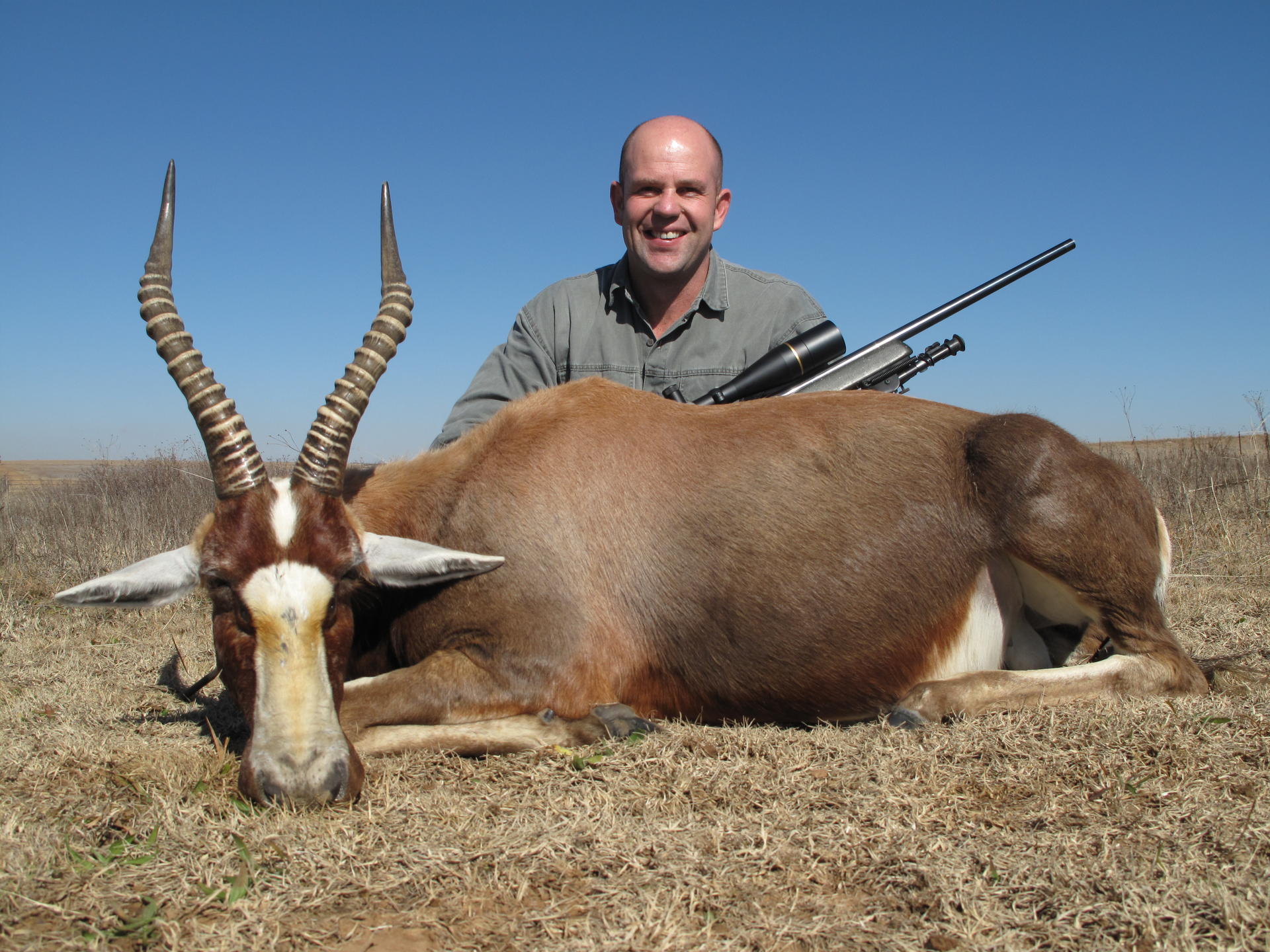 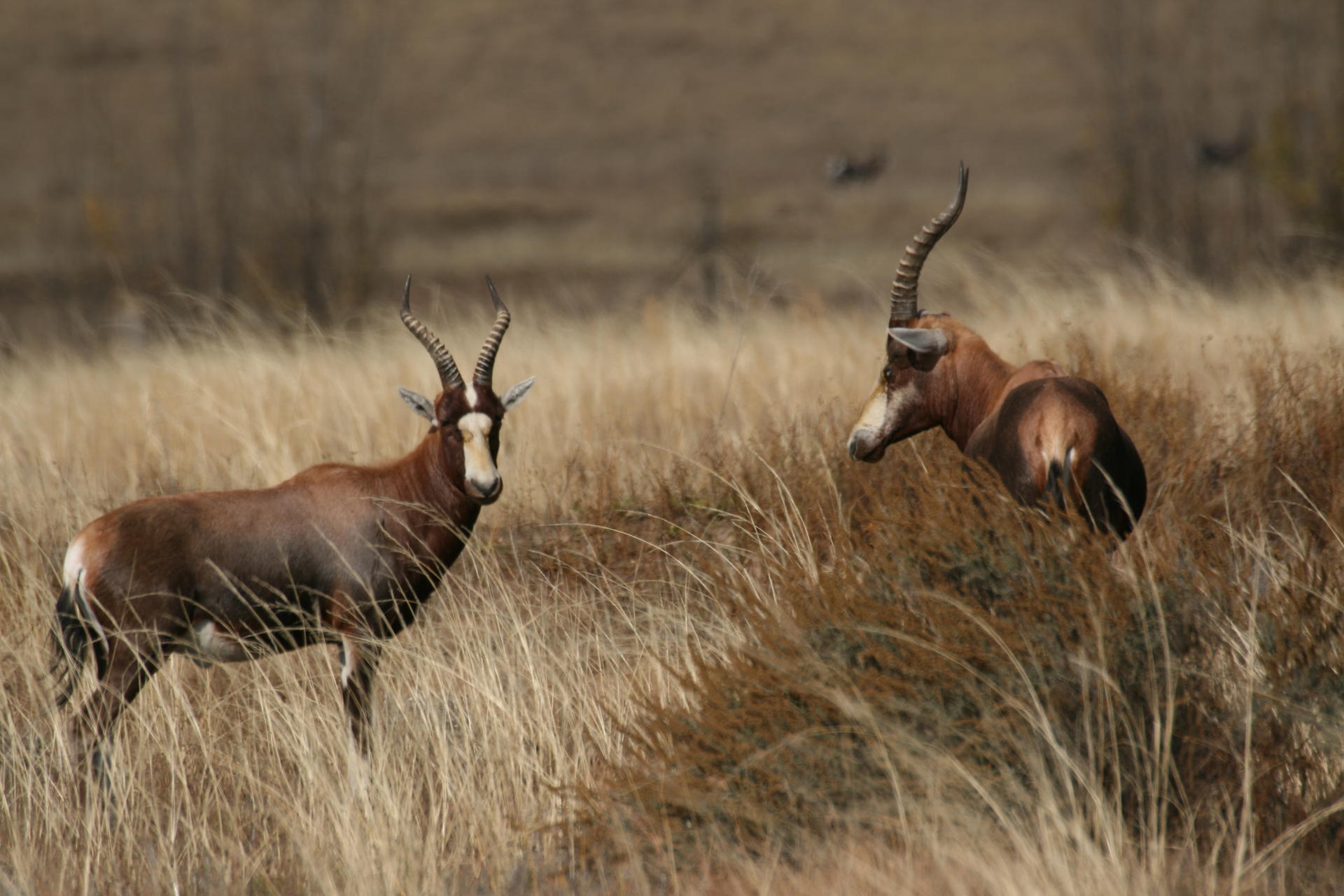 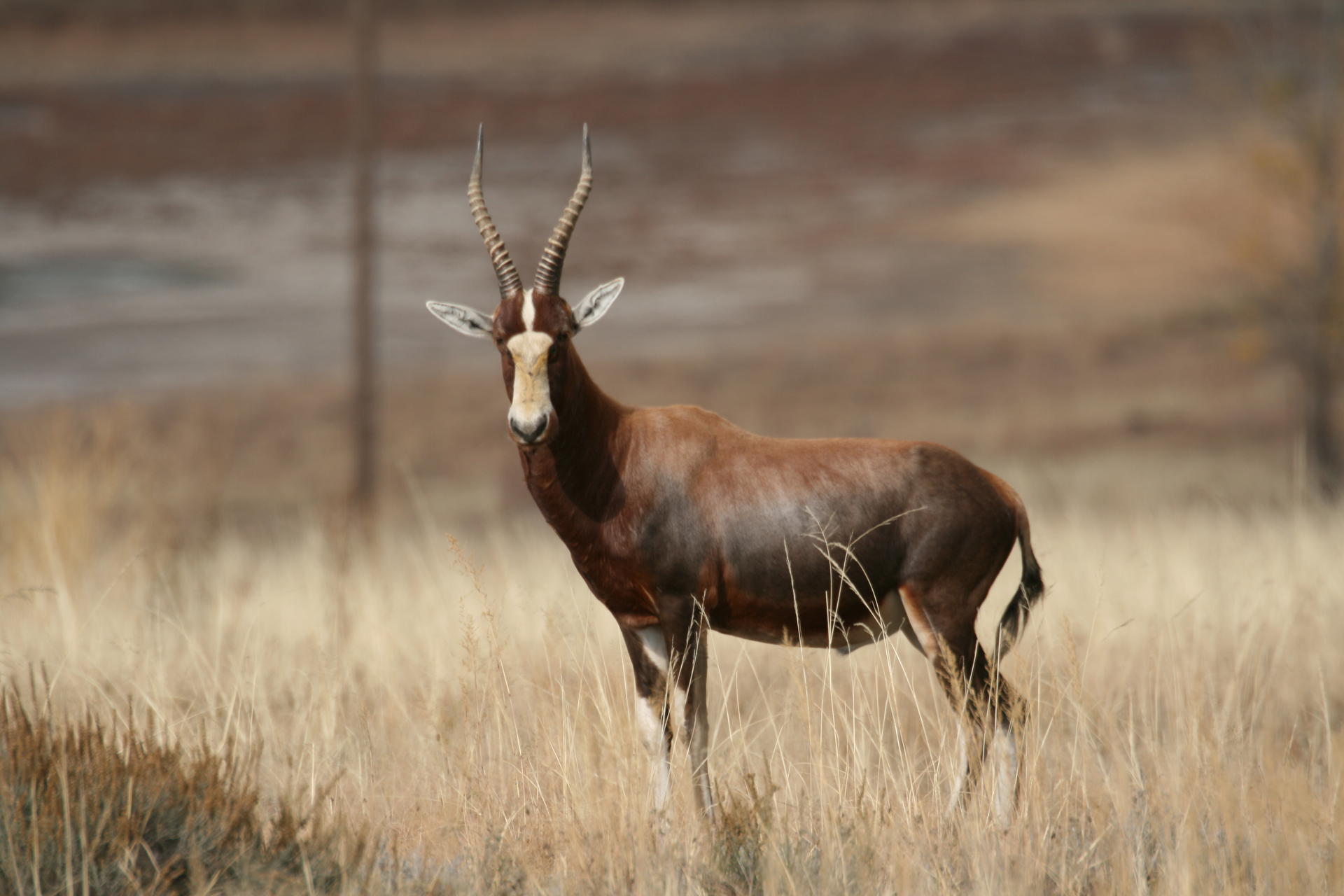 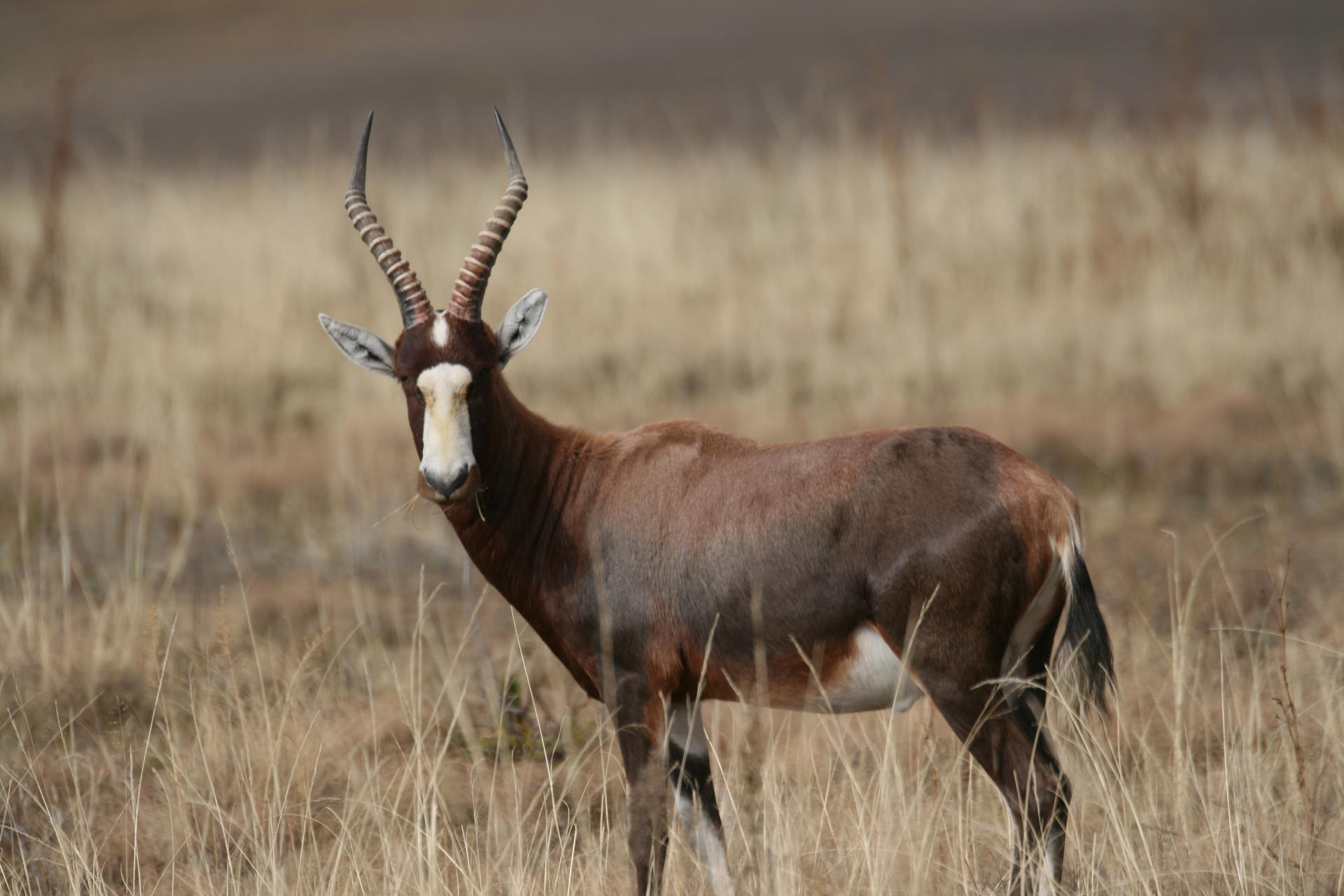 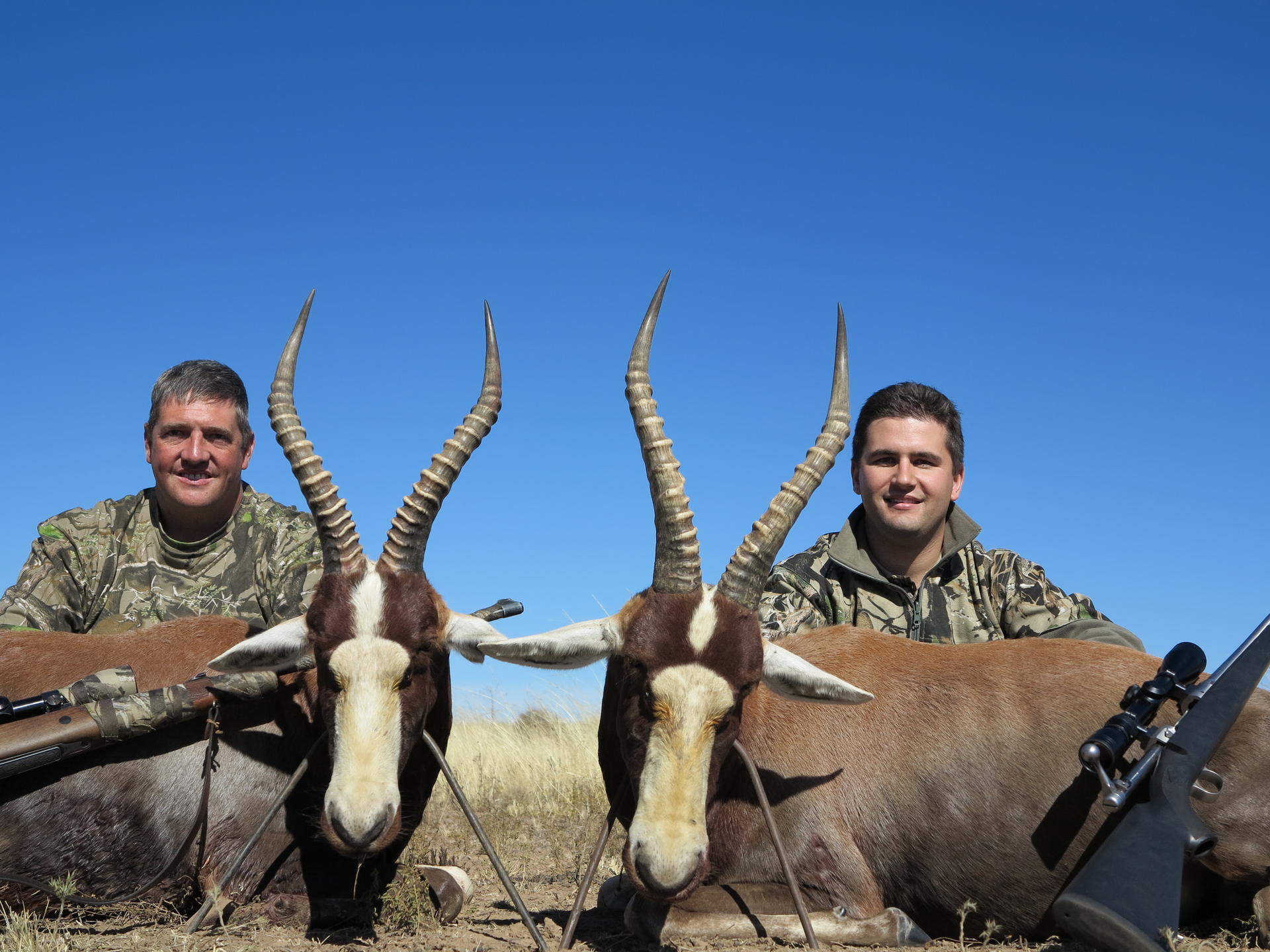 When dad bought the Range a small piece of the property where cut off by a road. The piece was 120 acres of size. They main property was to have Bontebok so there was no room for Blesbuck's. So I bought 30 Blesbuck's for my small parcel of land. After 6 months I had a phone call from the neighbour saying one of my animals where running up and down the border fence on his side. After going out to see if this was the case I found a male on the outside of the camp of really impressive proportions. He was not one of my animals but with very little effort we managed to herd him into the camp. He was boasting horns in the excess of 18 inches. So the idea was hatched to breed animal with above average quality horns. Two years later I caught a male three years of age and already 18.3 inches long horns and introduced him to the group. The first four years I took out all the young male offspring. Showing horns off average or less quality. The benchmark was 14.5 inches at 24 months, anything less was removed from the group. To sum things up. The group is only 70 animals strong. I have 4 males of 18 plus. 8 Males of 17.5 at the age of 4 years and healthy bunch of younger males. I harvested an old male last year that was 17 7/8, just below 18. But this year I did it. One client took an 18+ animal. The 17.5 was taken by his brother because he liked the mangled ear. A shame really for he was still young, 50 months or so. I am looking forward to next year when I will harvest two more males.
With the 18 mark achieve I will start looking at the 19 mark and maybe in the near future have 20+ animals. It took 8 years for 18 so let's hope I am still around to see the 20 mark.
Last edited by a moderator: Mar 6, 2016

Sounds like you have a good plan in play (that is working, ((which is a bonus)). Keep up the good work, pretty impressive critters. Look forward to more pictures in the future.:thumb:

That is a selection program that is working.
Looks like one of those boys was visiting the Bontebok club one night with those facial markings.
Congrats on hitting the benchmark.

Interesting remark. Because we have Bontebuck they all had to have DNA taken for testing to confirm that they weren't crossbreds. DNA was also taken from the Blesbuck's as a referral. The good news is that my Bontebuck as well as Blesbuck are pure bred. An interesting fact is that original photo identification method of nature conservation was replaced with new DNA method. They look at 13 markers on the allele to accurately identify the animal. 3 Percent of Bontebuck herds had Blesbuck DNA. 17% Of Blesbuck herds showed Bontebuck DNA! When hunting Bontebuck in South Africa be sure your PH has his blood sampling kit handy.

I figured you would have to have them tested in order to have both in close proximity.

Just shows how close you have to look and not just at one typical identifying mark.

The minimum separation required is two 6foot fences separated by at least a road's with. My Bontebuck are registered with the Bontebuck Breeding association of South Africa.

You probably will have to find a bull (purchase) with the genetics you are looking for.

That is Great and to think your sire Blesbuck was a freebee. Congrats looking forward to more pics.
Enjoy Life Now! It has an Expiration Date.

Just an Update. Darted a 3 and a halve year old Male that was showing potential. I estimated him around the 17 inch mark because he was still very young and will easily grow another one and a halve to two inches. Imagine my surprise when he taped out well into the 18 inches!! This is potentially a 20inch buck. He will be joined up with 30 selected females to breed and because of no competition he won't broom of his tips!. Also darted a 2 and a halve year old male for length and horn shape. Very pleased with him to. The big one has a SCI score of 50.5!

Keep them all well fed and happy and you should be successful.

Wow, that is a big blesbok!

S
SOUTH AFRICA: Just Returned From The Eastern Cape With Jimbah Safaris... Thank You All