I'm still getting synched to the time change and my wife handed me a massive honey do jar. I hope to add to this later but suffice it to say I had a blast. Hunted 3 properties with a great PH Johan and after 4 years finally got my baboon.

Day 1 off to the range to check my zero and after a few shots we are off to do a bit of scouting before dinner. Massive property with plenty of game but they are skittish so either shoot long or work on your stalking skills.

Day 2 Johan finds me 3 very nice Black Wildebeest with one being a great one. Unfortunately they are moving at 350 up high on the side of the mountain. Broke my first rule of don't shoot at moving animals and paid the price. He went down but jumped up and the 3 were off to higher ground. My PH went for the truck to cut them off while the 2 trackers and me followed them from what cover we could find. I got another very long shot at a steep angle but mistake#2 no rangefinder so parted the hair on his back only. We trailed him for the rest of the day but lost them.

Day 3 Johan takes me to a new place Comre for Eland. It is flatter, sparse cover and covered in stones. At my age I'm watching where my feet go more than the animals because a twisted ankle ruins the hunt. We finally spot some nice eland and low and behold one old gray bull. Sent Johan to get the truck and we followed them for a long ways till they stopped but a herd of giraffe had us spotted and pinned down. Nothing to do but wait till one or the other moved, thankfully the eland moved over the hill and we followed them. After spotting the old gray guy we started our stalk keeping what sparse cover there was between us till we closed to 300yds. I placed the crosshairs 8" over his shoulder and squeezed. The 7mm mag barked and he hunched I was sure he was done but you guys said keep shooting so a second produced another hunch then a slow turn and I dropped another quartering away. Down for the count. When Johan got there he looked at the 2 shots about 3" apart and said that where you hit him, nope those were the exit wounds, he couldn't believe it. Barnes 145LRX damn deadly. The 3rd was recovered and weighed 144gr. Getting him into the truck was even more of an adventure. 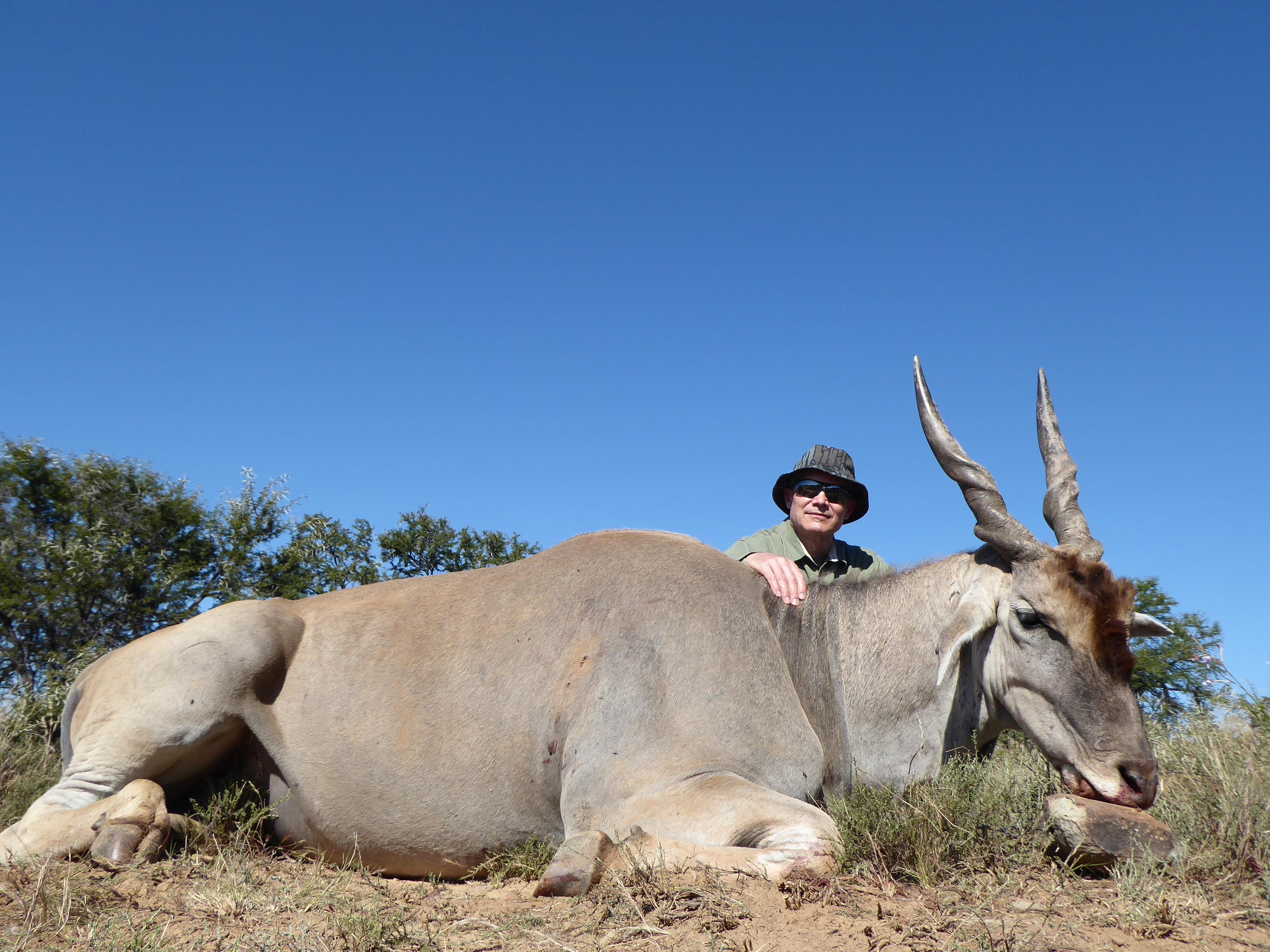 Time to play mountain goat. The blesbok at HuntersHill must have been cross breed because it is astounding how high they can climb. After hours of searching we finally find a good male that doesn't require an oxygen mask to stalk. It took a little time but I was able to get within 200yds. unfortunately he jumped as I squeezed off the shot and I got the hind leg. All I could get was a neck shot so down he went. The rest of the day was devoted to finding my wounded BWB, we failed.

Ups and downs of hunting. Lesson learned.
Keep the story rolling when you are allowed to.

Congrats on the eland and blesbok, look forward to more!
John 3:16

Love the Eland! My favorite hunt in SA. Looking forward to more.....
NO. I'm not a good shot, but I shoot often. Teddy Roosevelt
L

Day 5: I have been after a baboon for 4 years and the closest I got was a couple of years back out the window with a 9mm while headed to the airport. That is what I love about Africa, you definitely aren't in Kansas. Some of you are obviously better than me but I found it impossible to stalk baboon. They sit up on the cliffs at about 1000yds and bark at you, my kingdom for a steady rest and a 50cal. Earlier in the day we spotted a troop of about 50 on a neighbouring property running like the devil himself was chasing them, never did see what spooked them. So we parked our tails in a blind and sat there for the rest of the morning with predictable results, neither hide nor hair except for a pair of warey mountain zebra. Back for lunch and a new plan. After lunch we went after my BWB but again not a trace.
Any government big enough to give you everything you want is strong enough to take everything you have
L

Day 6: We head off early to another property near Fort Beaufort in search of Kudu. It is windy and the Kudu are layed up. We are busted numerous times but finally spot a really nice bull with 2 cows. They are bedded in some brush watching us and waiting for us to leave. My PH sends our 2 trackers to circle behind them and push them out. It worked, well half worked because while they moved slowly in the brush they crossed open ground at full gallop. Back to the truck and we tried to get ahead of them. I left with the 2 trackers while my PH stayed with the truck. That is the sign of a good PH, too many feet makes for increased odds of being busted. We spotted them again but no shot so another stalk brought us closer but by the time I was on the sticks they headed up hill. Another stalk and we hid behind some brush and waited. Lord those Kudu are tough to see but the trackers spotted the big guy slowly moving down the hill. Up on the sticks and waiting for him to enter a small clearing. At about 300yds he gave me a broadside, the 700 barked and he went straight down. So much for the easy part, getting him out was a treat. Thank god most of it was downhill. My first Kudu in the salt

Day 7: Back for baboon. On our way to the blind the caretaker told us that not long after we left they descended like flies on the blind. My PH and I are beginning to think that the clever bastards are patterning us, ie waiting for us to go to lunch. A hasty plan is hatched and we head off to the blind around 11. Out truck drives away and after an hour returns, pretends to pick us up then leaves. I'm hoping baboons haven't learned to count yet. Well it worked. They advanced on our position from 2 sides and I got a great shot at a really nice mature male with the best set of teeth I've seen for an old guy. Again the 145lrx dropped game in its tracks. Back for a late lunch and the rest of the day was spent looking for my BWB. By know you may have guessed I'm persistent

Day 8: Lots of wind and some rain have made the mountain roads treacherous. No choice but to navigate the lower portions. Nothing shootable
Any government big enough to give you everything you want is strong enough to take everything you have
L

Day 10: Suffice it to say that I'm now convinced that I won't find my BWB but off we go yet again. Plenty of wind, spitting rain (isn't this the dry season) and some really low cloud cover blankets the mountains. We have seen a few herds but my guy is nowhere to be seen. So I bit the bullet and we started a stalk on a really nice bull. Taking advantage of tree cover we managed to get to within 250yds but the wind was at our back and they winded us. They took off but the bull stopped for a few seconds giving a clear shot. The big 7 barks and he is DRT.

Had a wonderful time and met some great people from the US, England, Australia and Ireland.

Congrats looks like you had a great hunt. Crazy how smart those baboons are.

Congrats on the baboon, no easy species to hunt as I can attest as well.
John 3:16

Looks like you had a great trip. Congrats on your trophies.
Bruce

Yes congrats on some nice trophies!
Tommorow is promised to no one. Go live your dreams.

Congrats and thanks for the report.

Congrats on the baboon!
You must log in or register to reply here.

SOUTH AFRICA: On To Huntershill Safaris For Another Awesome Hunt
2

SOUTH AFRICA: The Karoo With Inkulu Safaris May 2018