Some stories include aberrant behaviour of man-eating lions and killer crocodiles, stories of courageous Rhodesian game rangers who while fighting to preserve the wildlife of a beautiful country were also fighting a war.

Having also served in the previous South African era ‘black homeland’ of Ciskei he offers an often-humorous insight into life during the wayward period.

The book ends with a look into what it is like to work in war-torn Iraq in the specialised field of Security Escort Teams.

Shadows in an African Twilight can be ordered directly from my website at www.KevinThomas.com. 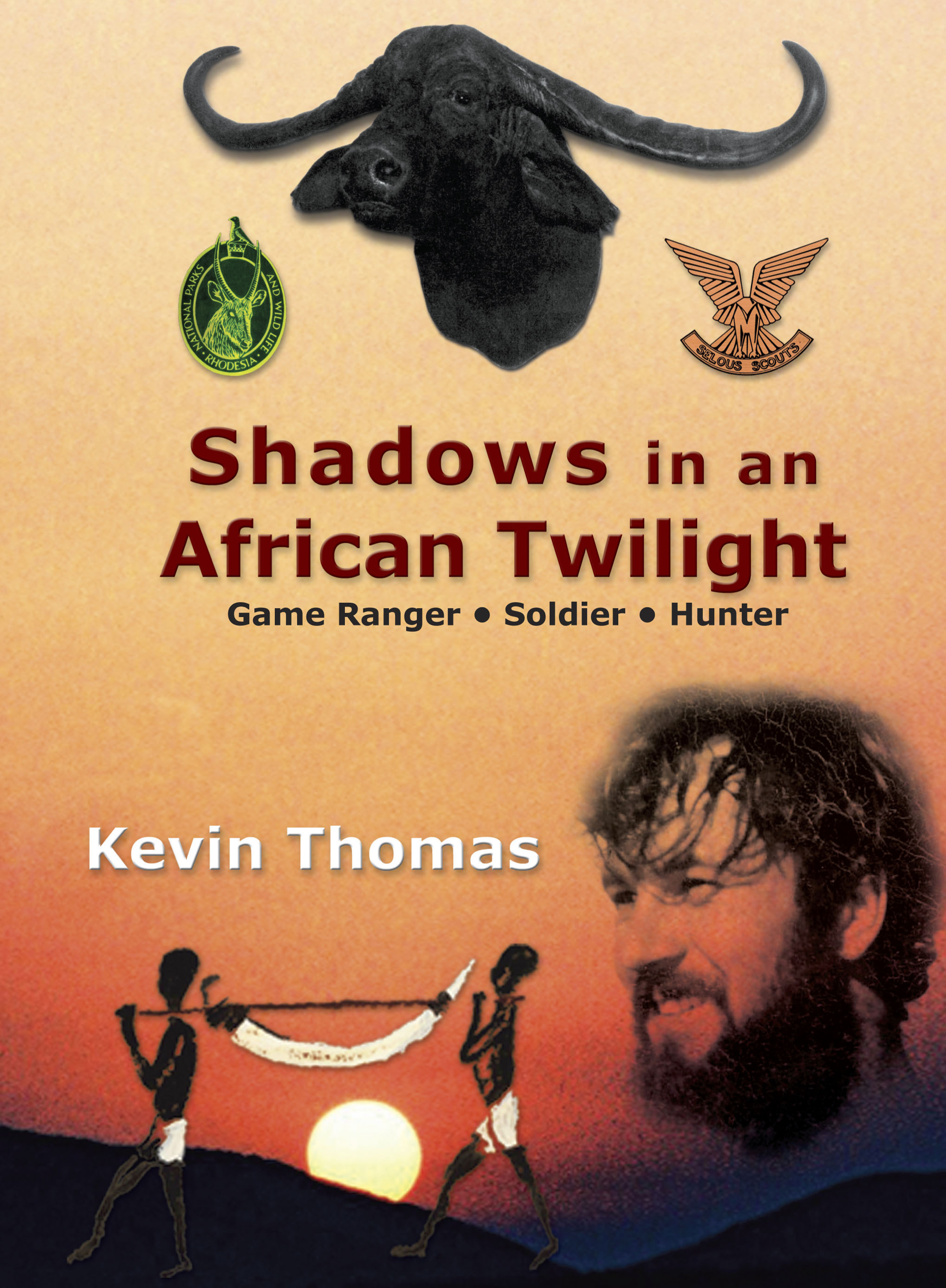 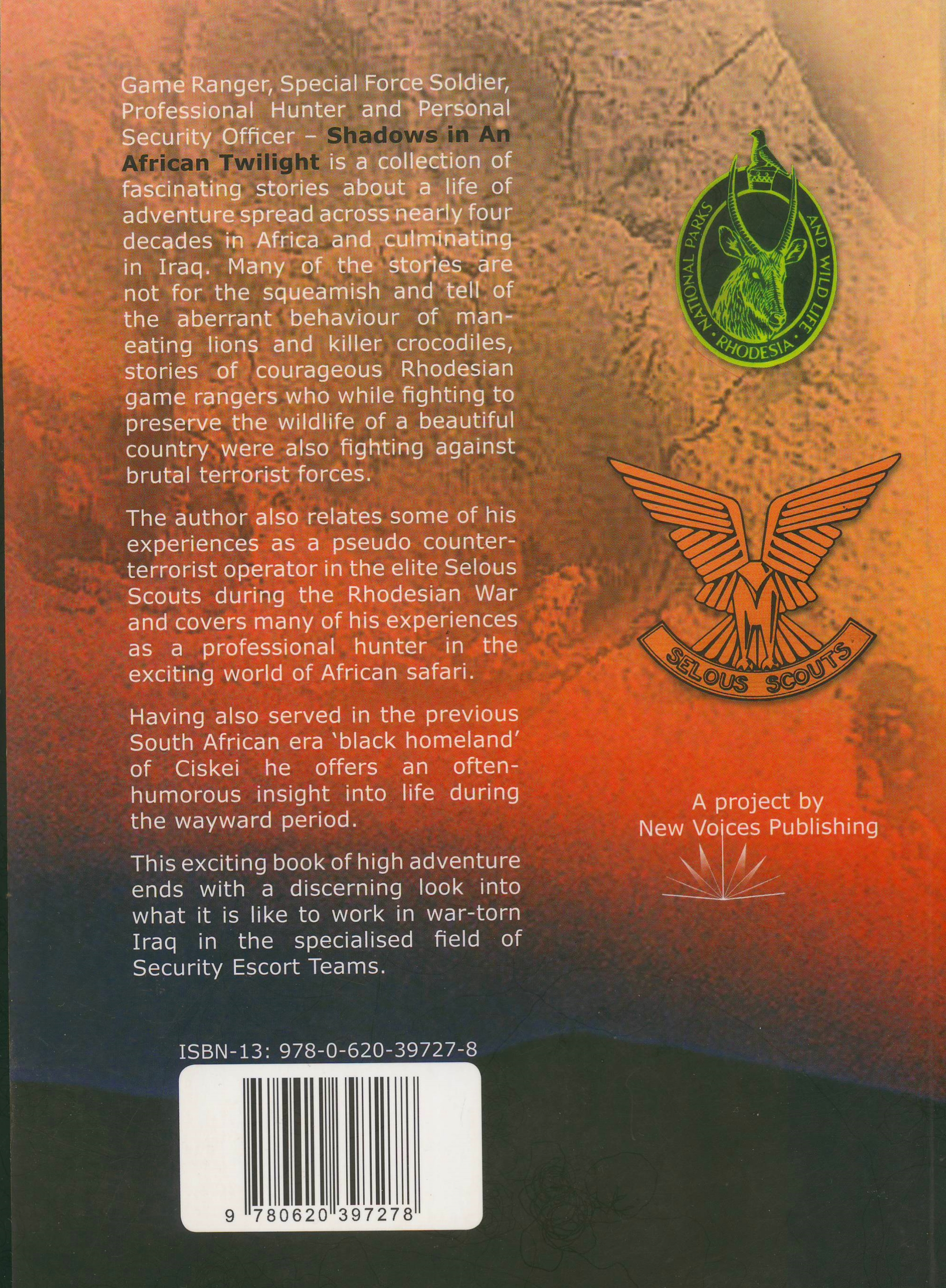 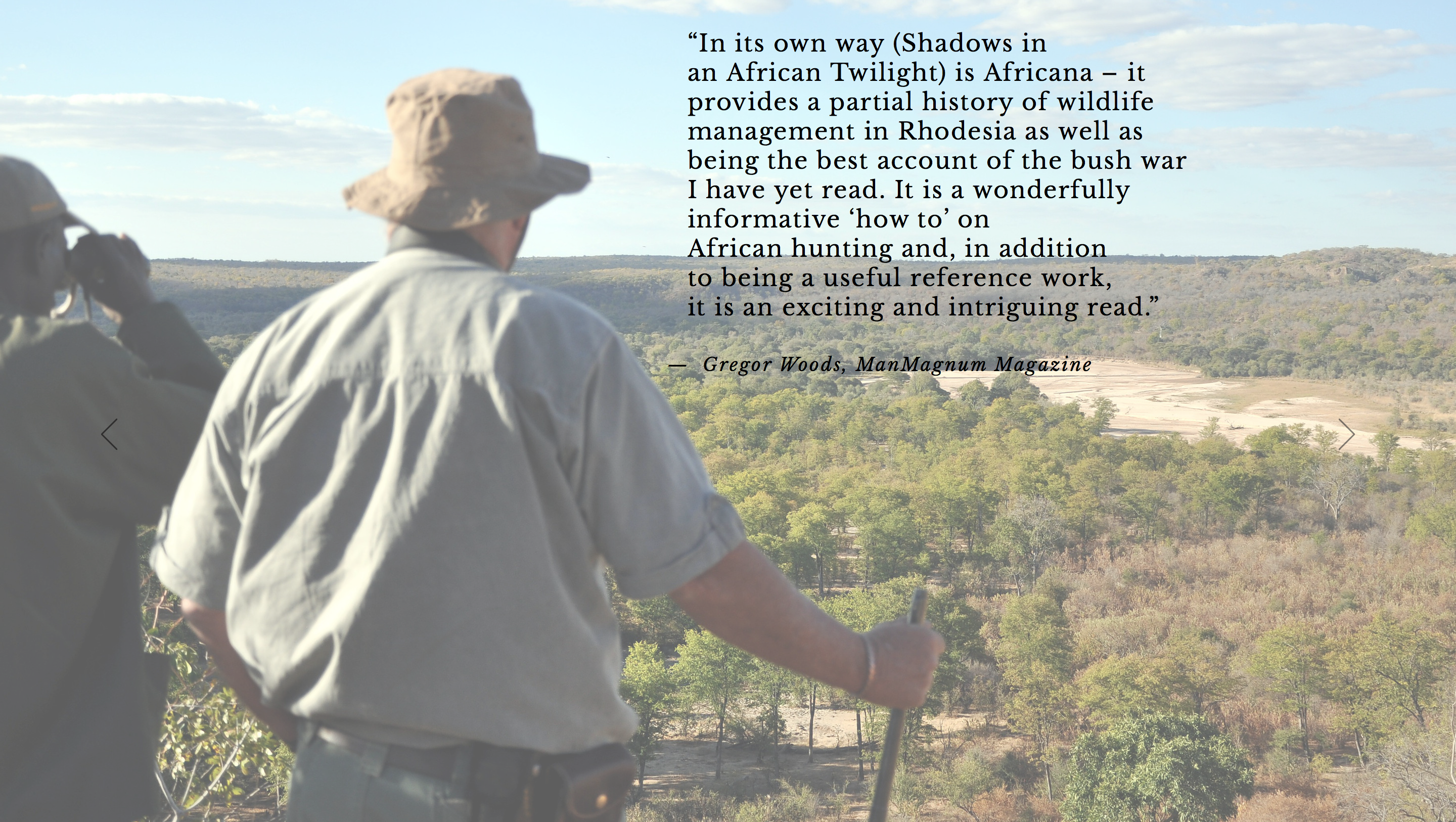 When I was a boy living in South Africa, ‘the Rhodesias’ represented the Africa I craved but had seen little of. My first trip to Rhodesia was in 1966; I was so captivated I made it my second home. One reason I found his book so compelling is that I was in some of the same places and at much the same time as Kevin and can well understand the way he lived, hunter and fought.

Kevin Thomas, professional hunter and regular Magnum contributor, needs little introduction to our readers. He was born in Salisbury, Southern Rhodesia in 1950, and grew up in the remote and pristine Save river valley, spending most of his boyhood hunting. He was fifteen when the Rhodesian government announced UDI and had little idea of what this would bring in his life. On graduating from high school he entered the cadet game ranger scheme of National Parks & Wildlife Management and began a life of high adventure. He worked with young men who would later become wee-known as game rangers and professional hunters: Oliver Coltman, Rupert Fothergill (Operation Noah) Tommy Orford, Paul Coetsee, Mike Bromwich, Barry Duckworth, Spud Ludbrooke and many more.

Shadows is 700 pages long and covers Kevin’s life until 2008. His adventures as a game ranger were so numerous and interesting that it becomes impossible to choose examples to relate in a book review. Suffice to say, it is very well worth reading, and contains rarities such as witnessing the last ever (formerly annual) Shangaan fish drive.

By the mid 1960s, the bush was picking up, and by 1967, ZIPRA guerillas were already trying to find a way through Wanke, the Zambezi Valley and other National Parks and Controlled Hunting Areas to infiltrate the country. Game rangers were among the first civilians to become involved in counter-insurgency operations, as they knew the areas involved, were generally excellent trackers, good shots and could survive in the bush.

Around this time, when Kevin married Brenda, they lived in a tented camp on the Sapi river near its confluence with the Zambezi. He was twenty-one and she nineteen – it was to become a lifelong partnership. Much of his work, under regional warden Paul Coetsee, involved problem animal control and his adventures were many and hair-raising, especially with lions and elephants. But this book is not just about adventures – Kevin is a keen observer and constantly describes and explains various phenomena, teaching the reader much of interest about the bush and its wildlife.

Inevitably, due to his fluency in local tribal languages, Kevin became increasingly involved in counter-insurgency work, and was particularly successful with the ‘pseudo operations’ pioneered by Mike Bromwich. These involved pretending to be fellow insurgents (or sympathetic to the cause) in order to obtain information on their movements and positions. In 1974 Kevin joined the regular army and soon became a member of the newly formed Selous Scouts. This section of the book cannot be described as a ‘light read’, but it is a must read if you want to know just what a dirty business was can be and want an understanding of how complex and risky, difficult and dangerous there operations were…and how important the role of intelligence gathering.

After the war, Kevin and his family moved to South Africa, where he worked for Dr Ian Player’s Wilderness Leadership School. He went on to become a professional hunter, operating in various parts of southern Africa. The next section includes highly informative material on various game species from the biggest on down, and how to hunt them. It is filled with Kevin’s personal anecdotes, and there is a section on rifles and calibers. Kevin eventually settled in the Eastern Cape, and there are sections on hunting with dogs, and on the safaris industry in the East Cape.

In 2003 Kevin worked in the security sector in Iraq, and he describes his experiences and the characters he met during the conflict. Today he is back in the Eastern Cape and is still an active professional hunter.

In its own way, this book is Africana – it provides a partial history of wildlife management in Rhodesia as well as being the best account of the bush war I have yet read. It is wonderfully informative ‘how to’ on African hunting and, in addition to being a useful reference work, it is an exciting and intriguing read. My only criticism is that I think it should have been split into two books, one on Kevin’s bush war and Iraq experiences, and a second on his game ranging and hunting life. This massive softback sells for R300 (postage excluded) Ex-Rhodesian servicemen, civil servants and pensioners can buy it for R200, but Kevin makes that offer only once he knows who the buyer is. It can be ordered directly off his book website Kevin Thomas Website. I regret that due to pressure of work (and the length and complexity of Kevin’s story), I have been tardy in writing this review, and of the 2000 books printer, only 400 now remain, so get in quick.

Don Heath loaned me a copy of Kevin Thomas's Shadows in an African Twilight on my recent trip to Sweden to tour the Norma ammunition factory. It would be an understatement to say that getting my hands on this book was an added plus during the trip.

Kevin has written numerous articles for African Hunter in the past, and he combines a lifetime of experience with a dry sense of humour and a very light and lively style of writing that is easy to read.

When I first started leafing through Shadows in an African Twilight in Don's office, waiting for the coffee to arrive, I reflected that at over 700 pages covering three decades of an adventurous life, it would be awhile before I got around too reading the book and writing a review. I was wrong. It was too intriguing to leave on the bookshelf for long. The prolegomena read like a Who's Who of the legendary figures from the halcyon days of Rhodesia's Department of National Parks and Wildlife Management, southern African professional hunters circles, and notable of the Rhodesian army, and these names come to life vividly in the ensuing pages.

Born in 1950, Kevin Thomas was privileged to have grown up in an African bush that was then as it should be without fences or conflict, other than that which is a natural part of wilderness. At the age of 17, he was successfully interviewed for one of a handful of cadet game ranger positions with Rhodesia's National Parks department. Kevin spent a number of adventurous years in National Parks, but having done his national service basic training, as the bush war intensified in the 1970's, he joined and passed the first proper selection course for the legendary Selous Scouts regiment one of the finest special forces that the world has ever seen. During the course of the war he was involved in numerous operations against insurgent forces. His account of the end day of the war and the poaching scandal that irreparably tarnished the image of the elite Selous Scouts regiment is the most accurate and unbiased I have read. Because of his National Parks background and his membership in the unit he was to become personally involved in the investigations and also personally targeted in the ensuing attempted cover-up.

Following the war, Kevin embarked on a professional hunting career in South Africa, worked for a time in the South African homeland of Ciskei, and almost as if it were obligatory wound up working for the PMC Erinys on security escort duties in Iraq. Having myself done a stint in the homeland of Bophuthatswana and then, two decades later, with the PMC Global Risk Strategies in Iraq, I found these parts of Kevin's story of special interest for the parallels.

Those 700 pages flew by, but Shadows in an African Twilight is definitely earmarked as one of the special few tat get re-read again and again. And on that note, I do have one bleat about this fine book. It is deserving of a hardcover edition, and the black and white photos that accompany the text do not do the story justice. It is certainly one of the most worthwhile books Iè‡´e read in a good number of years. I.J. Larives. African Hunter. Vol17 No4 2012. 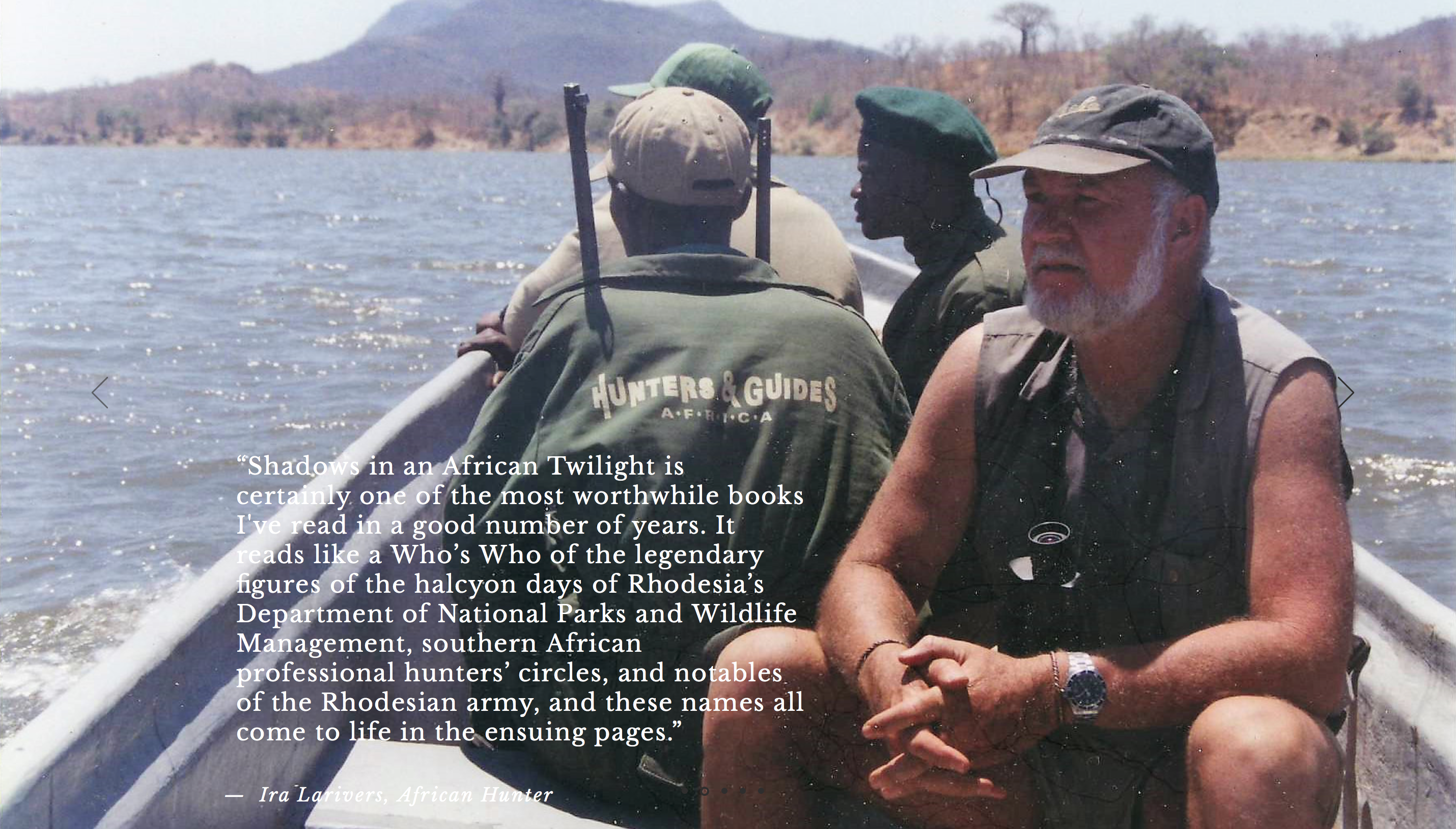 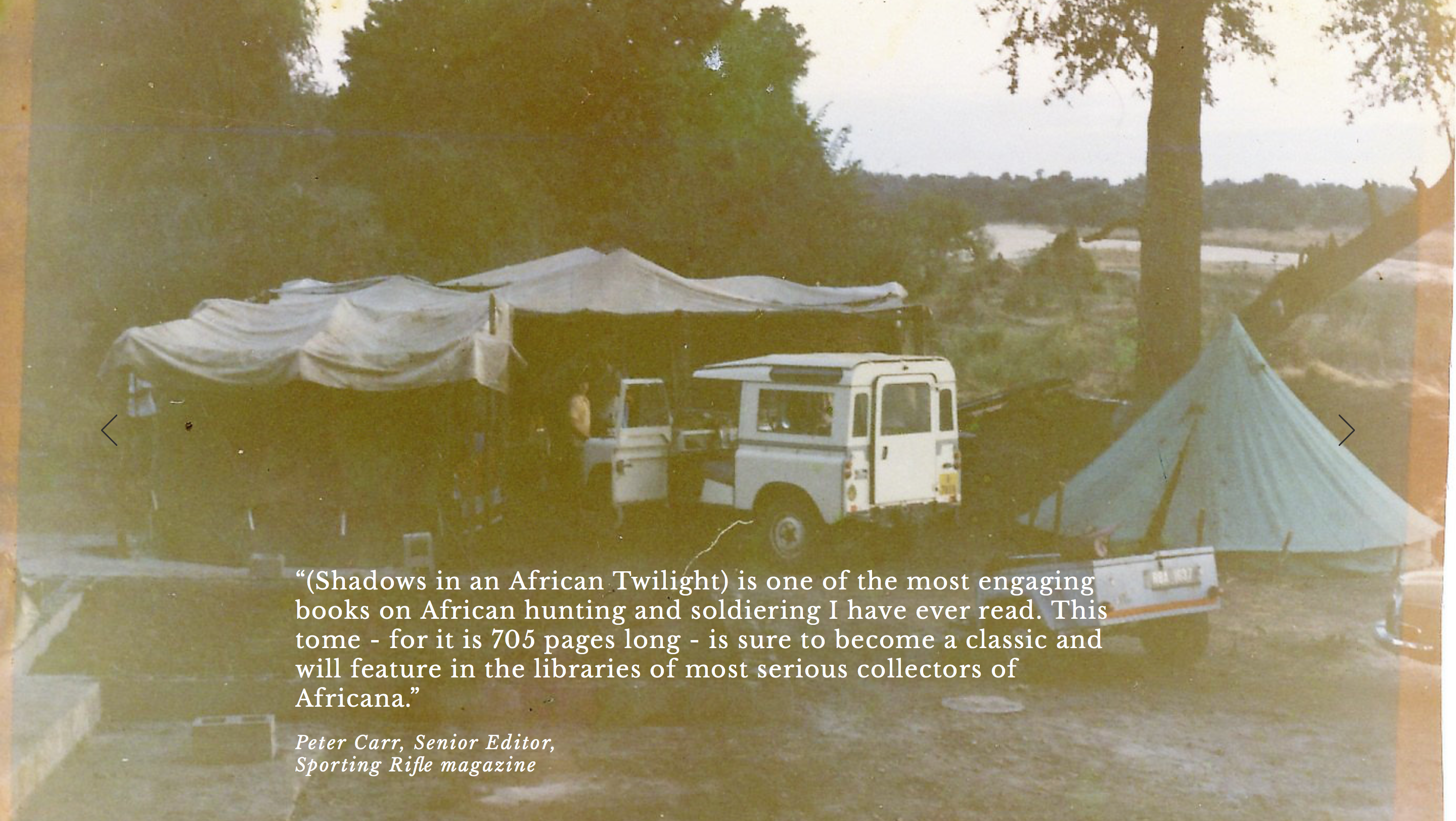 Shadows in an African Twilight - 60% Discount