On my previous visit to Namibia in 2008, Gerrie, my friend from school turned PH, suggested bit of a different hunting trip for 2009. Instead of the "normal" kudu hunt for biltong, we would make the roughly 380km trip from his farm to the Khomas Hochland to hunt a Hartmann's Zebra.

So it was a long wait for the 3rd of July 2009, when we left Johannesburg by road, first to pick up my dad about 350km away, then turn north through Botswana and complete the 1,450km trip to Gerrie's hunting lodge, about 80km from Gobabis in the eastern Kalahari. After about 12 hours of driving, border posts and taking breaks to eat breakfast, we arrived on Morester (translates to Morning Star). Unpacking took no time at all and decided we will check the zero on my rifle the next day. My bed for the next week or so felt so good after the long trip and a hearty lamb-pot meal.

Excitement was building as the hunt neared. The morning broke with a bit of cloud in the air, a bit unusual for Namibia in the winter. But the cloud soon vanished as the sun got higher up the clear, blue Namibian sky. My heart sank into my hunting boots after firing 3 shots on the range... I couldn't hit the target at 100m... What was wrong? I am expected to hunt a zebra in 2 days time at anything from 100m to 200m away, and now I can't even hit a stationary target?!?!? To make a long story short, 2 weeks prior to leaving for Namibia, I was in the Eastern Cape hunting kudu, stepped on a loose rock, lost my balance and banged the rifle's muzzle HARD on a rock, hard enough to chip the muzzle on the outside. It took me 13 shots to get the rifle to shoot straight again... 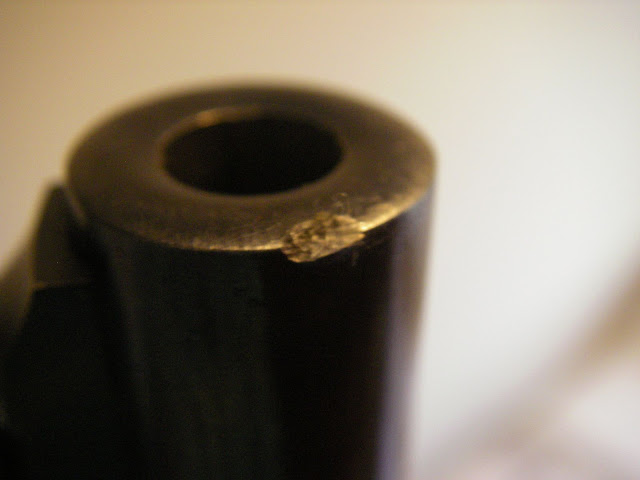 We left for Windhoek (about 300km) on Monday, picking up supplies at a supermarket and headed further west to the Khomas Hochland (another 80km). 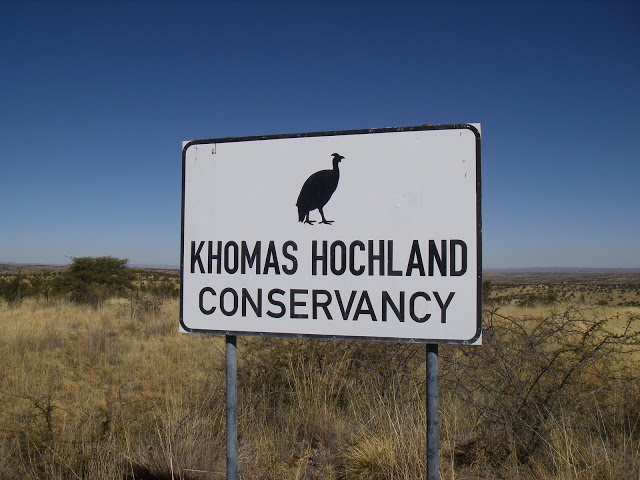 The Khomas Hochland (KH) is different to say the least. Rocky, steep hills packed close together with the dry, sandy riverbeds being the only flat landscape you will see. We arrived at our hunting location, unpacked the fully loaded Toyota Land Cruiser and got ready for an afternoon drive/scouting expedition. It wasn't long before we saw some Zebra, but way out of range for my 30-06 and also a bit too late in the afternoon for a walk and stalk. At least we had a starting point the next morning. 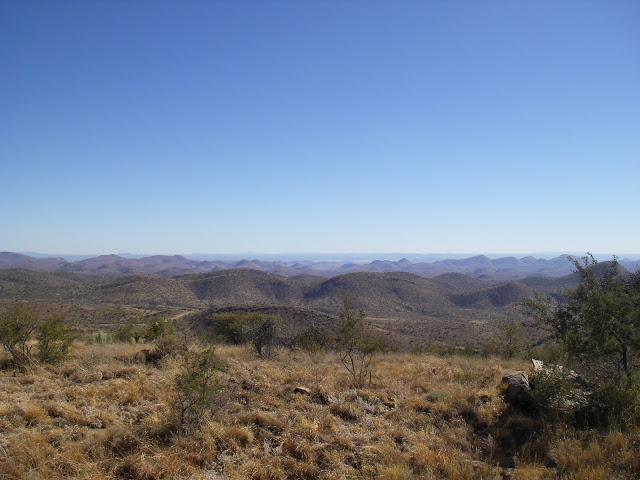 The following morning we headed to the location we saw the zebras the previous evening. Surprise Surprise ! They were no longer there! We glassed the surrounding hills, but saw nothing more than gemsbok staring back at us. We continued driving up and down the next couple of hills. Reaching the top of the next hill we were alerted by Hans, one of the trackers, of zebras not too far away. We stopped, had a look and decided to continue on the road to get into a better stalking position. About 300m further we stopped, got off and started to stalk uphill, expecting the zebras to be just over the top of the hill. The vehicle in the meantime doubled back to from where we came, to try and keep an eye on us and the zebra. We continued up the hill, and I only then realized how rough the terrain really was. Loose rocks everywhere and dry grass making a lot of noise, did not add to making a stealthy stalk. We reached the peak, expecting to see the zebras, but they were nowhere to be seen. With a cliff on the left, and the road on the right, where did they disappear to? Fact of the matter they were gone, they disappeared into thin air. But we were forewarned about their ability to "just disappear" if spooked. So we got back on the vehicle and started to cover more country...

During the next 2 to 3 hours, we saw quite a lot of gemsbok, including a few really nice bulls. But we were there for mountain zebra, the gemsbok were safe, from us at least. We headed back for lunch and bit of a rest... We started gathering our equipment for the afternoon hunt after a power nap, with me and Gerrie almost simultaneously saying that we had a feeling that the afternoon will produce success. So with a renewed vigour we headed west, trying to keep down wind.

We drove around for half an hour, stopped and got off the vehicle, walking a couple of meters to scout a promising looking valley. At first we saw only bush and rock down in the dry riverbed. We stood around relaxed when Gerrie all of a sudden motioned us to get down and back to the vehicle. He saw some zebra down in the riverbed that we initially missed, luckily they did not see us as we walked back to the vehicle, trying to keep as low as possible.

Grabbing my shooting sticks, we went back, but this time a little bit higher up the hill from where Gerrie first saw the zebra. The sun was at our back, the wind was howling through the little valley, taking our scent away from the zebras. Everything seemed perfect... except for the fact that we were spotted by 3 gemsbok... they spooked and so did the zebra. Gerrie muttered a few explicit words as the gemsbok ran up the opposite hill, followed slowly but surely by the zebra. We sat down in the shadow, watching the zebra slowing down and standing halfway up the hill. The gemsbok were almost at the top and still moving away from us, looking back every know and then to check our position. The zebra, luckily, did not see us.

We sat in the shade, glassing the zebras, ranging them... They were more than 375m away. We had 3 options, go back and around the hill on which they were, down the valley and stalk from below, or continue on the ridge where we were sitting, keeping the late afternoon sun at our back and the wind rushing down the valley. We decided on the latter, moving in the shadows as much as possible, keeping as much cover as possible, between us and the zebras. We moved low and fast in the more open areas, a bit more upright in the more densely bushed areas, trying to keep an eye on the front zebra which was our target. Every now and then we would check the range, slowly but surely we got closer and closer...

The gemsbok were still cautiously watching us from the top of the opposite hill as we got the range to the zebra down to 200m. Now we were getting somewhere !!! We paused for a moment, adjusting the legs of my Bogpod shooting sticks for taking a shot while sitting down. We started to look for a suitable location to shoot from, as the zebra we were targeting, was quartering slightly towards us. We wanted to get on its side. So we moved another 30 or 40m, picked a bush which had a thick canopy overhead and provided lots of shadow.

The below pic was taken from where the zebra stood, looking back at where we sat (red circle) 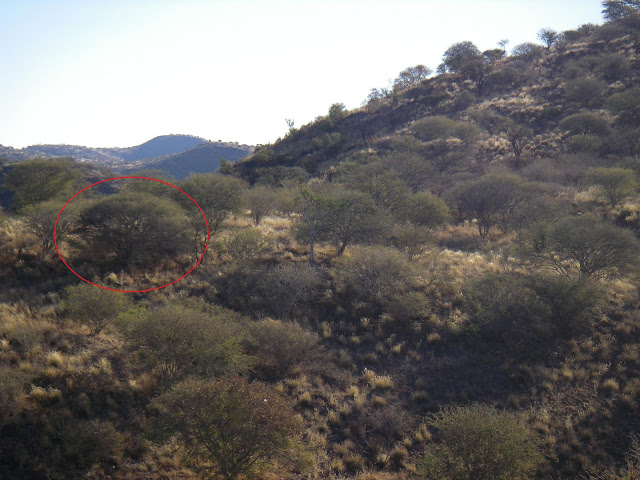 We made the final dash to where we needed to be. We sat down, readied the shooting sticks and took the range to the zebra, which we identified as the stallion. It was 172.8m... we were in range and ready to take the shot. The stallion turned it's head in our direction, but his ears remained down, a sign that he was relaxed. Gerrie whispered that because of the slight angle, I needed to aim about 2 inches ahead of the top of the "A" of the stripes. I nodded as I moved the crosshair of my Leupold VXIII 2.5-8 x 36 towards the target area... I took a deep breath, exhaled somewhat and squeezed the trigger...

What felt like ages, the thud of a good solid hit came back to us. Anxiously Gerrie kept an eye on the stallion as I reloaded. I kept looking at him through my scope, seeing that he was starting to stumble around, next he turned around and showed us the shoulder we shot at... blood was running down his front leg from a wound exactly where it was supposed to be. The 180gr Hornady Interbond hit the mark precisely and penetrated way past the vitals, taking them out on the way through. The stallion went down, not 10m away from where it was when I took the shot. The startled mares and fowl stared at us as we started celebrating, only running away when we stood up and moved out of the shadows. A feeling of relief washed over me as I realized just how tense the stalk was, particularly because of the gemsbok watching us all the way.

We walked down the small valley and up on the other side. The stallion was down. Gerrie radioed the vehicle while I was busy paying my last respects to the stallion. Stroking the stallion along the flanks I still felt his warmth, the dust exploding into the air as I slapped my hand softly on the hide, feeling the bulkyness. I then noticed all the bitemarks on his body, especially around the neck area, a sign that the stallion has been around the block a few times and earned the harem that now was up for grabs again. I didn't mind the scarring, for me it adds a lot of character. 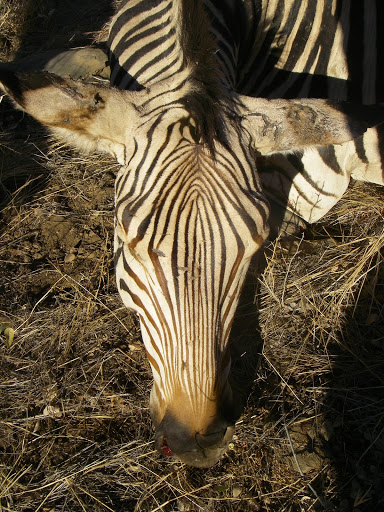 The placement of the shot 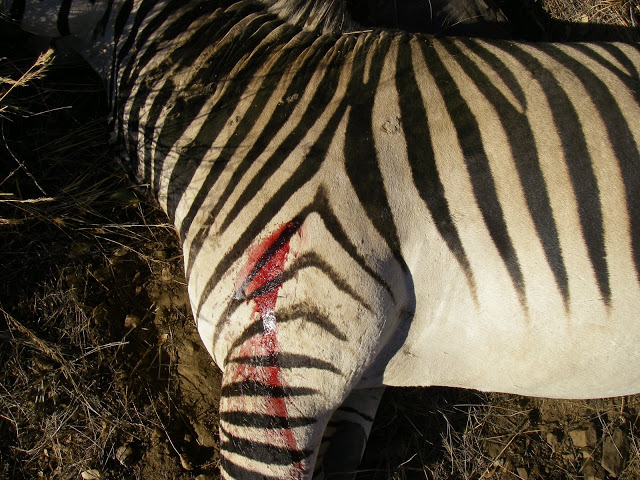 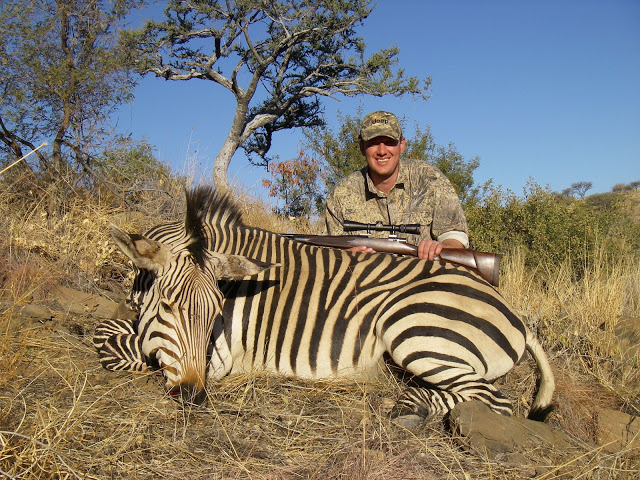 Unique markings of the mountain zebra 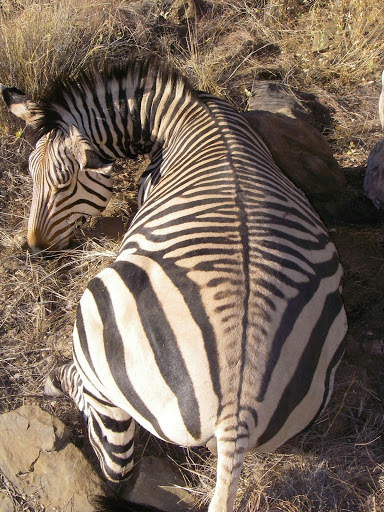 This was surely the one of the best hunts I participated in. Hunting a unique specie in unique surroundings made for a... well... unique and highly recommended experience !

Great story and pictures, thanks for sharing.

Nice trophy and great photos and story.
The area looks like an awsome place to do spot and stalk rifle hunting.

Great report. Mountain zebra was my first African trophy and still one of my favorites. The pedestal mount I had done has a place of honor in my house.

Great write up, Zebra has been one of my most rewarding hunts... Congrats!!!
You must log in or register to reply here.