Thanks for the rest of your comments. The writing of installment II is in progress...

buffybr said:
Wayne, my computed didn't blow up, its just that my computer's operator has a bad case of CRS disease (Can't Remember Sh*t). Yesterday I had to make a special trip to the Verizon store in town for them to show me (again) how to transfer photos from my phone to my computer.
Click to expand...

Bet you could show them how to properly pull the trigger.
HUNTERS make importation bans work!

buffybr said:
Thanks for the rest of your comments. The writing of installment II is in progress...
Click to expand...

We are eagerly awaiting!
"A man and a gun and a star and a beast are still ponderable in a world of imponderables." Robert C Ruark

Awesome Kurt. Thanks for going to town for us

BRICKBURN said:
Awesome Kurt. Thanks for going to town for us
Click to expand...

Hey Wayne, I'll gladly take one for the team.

The Maputo VIP Grand Hotel is not too shabby a place to stay. In the evening, the Hotel bar is a quiet and comfortable place to quench your thirst, they have a free, full breakfast in the mornings, and it’s not too crowded to hang out by the pool. 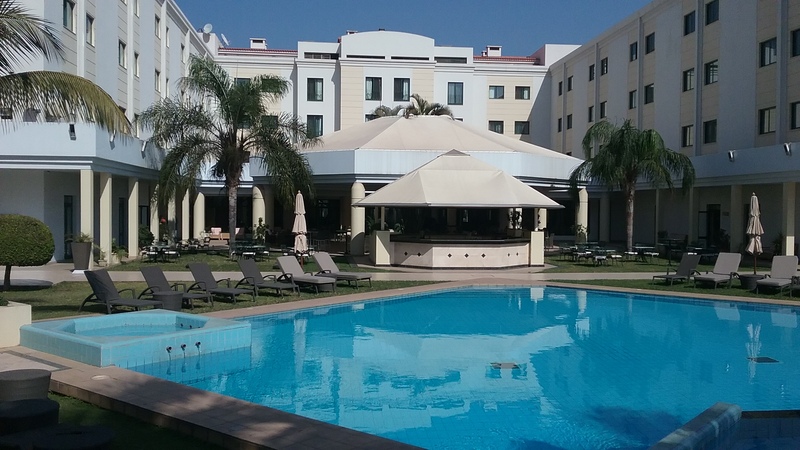 Simon and I explored some of the city near our hotel. One of our stops was a huge enclosed “Farmer’s Market”. Just about any kind of fruit, vegetable, fish, or meat was displayed in large quantities throughout the center of the market. Without refrigeration, the smell in that market was quite strong, and we didn’t linger going through it.

Outside of the enclosed market place was a crowded maze of little shops, each full of just about anything you would want to buy.

Simon and I rode back to the hotel in this little 3 wheel “taxi”. 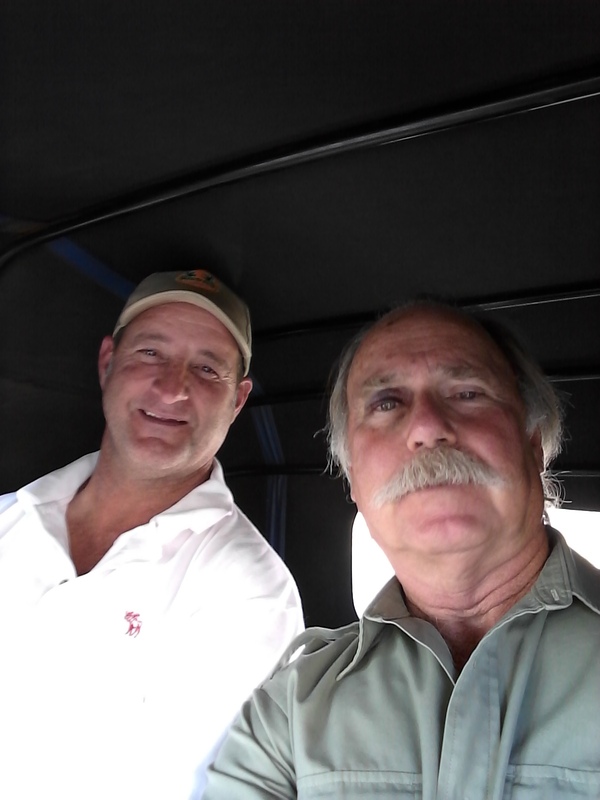 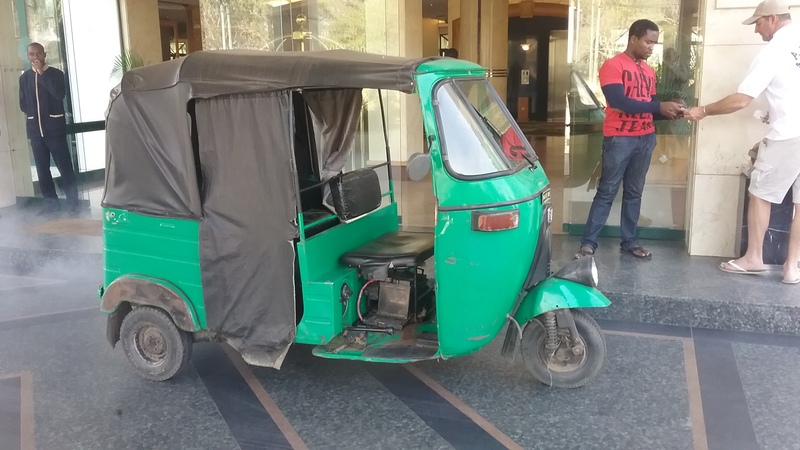 That evening, we found a good looking outdoor restaurant just a few blocks from the hotel that served a great dinner of barbequed shrimp… 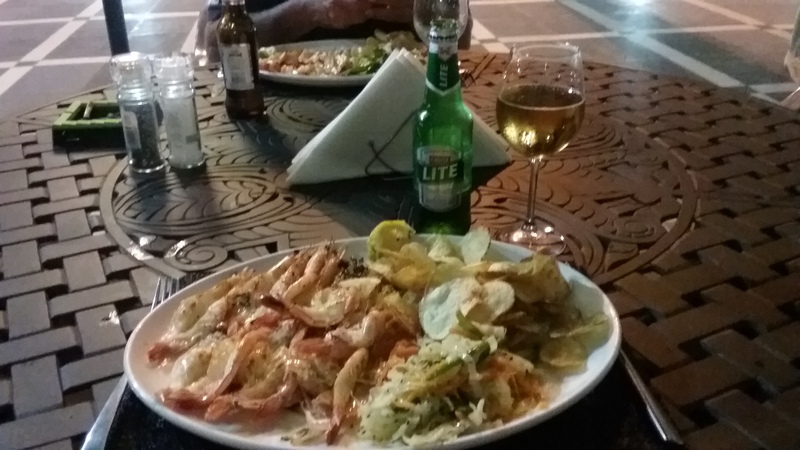 We finally arrived in Lichinga where Courtney and Tiaan, Simon’s two apprentice Professional Hunters met us, and we began the 6 hour drive to camp.

A little over half way to camp, we stopped to clear the dust from our throats 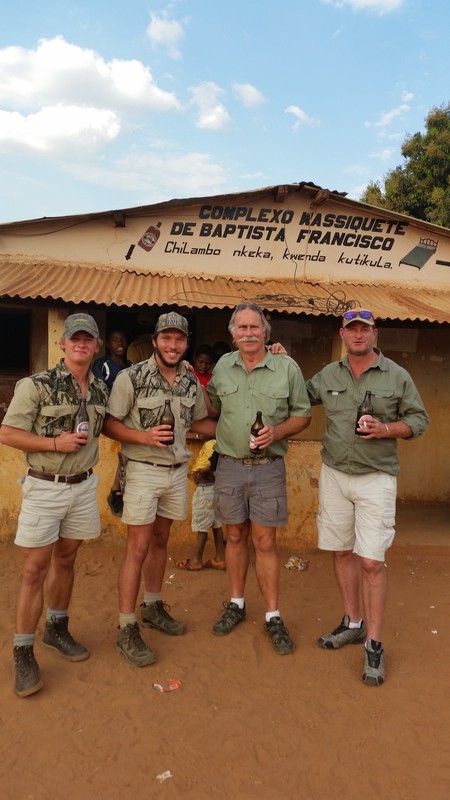 When we finally made it to camp, the camp entrance was a familiar and welcome sight, and the Old Glory that I had left in camp last year was proudly flying on the first flag pole. 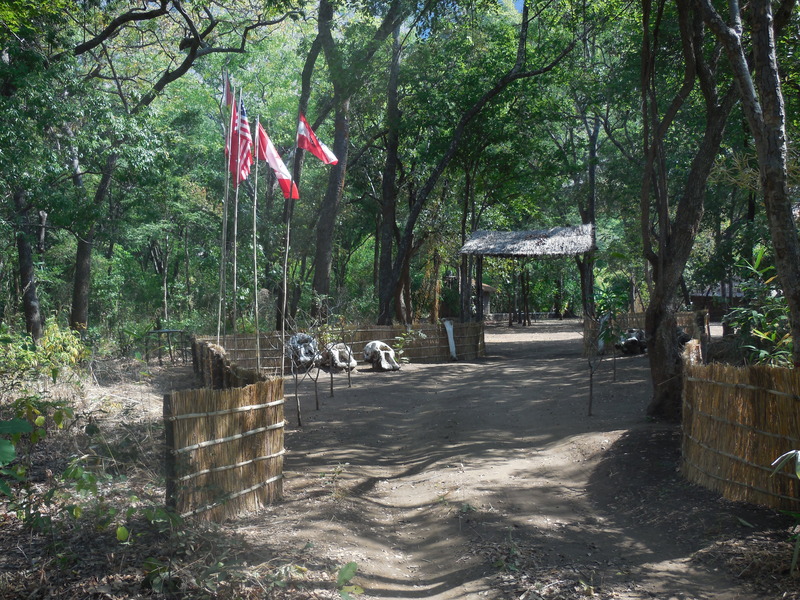 The rest of the camp was also just as I remembered it from last year. Some new maze fences had been put up, 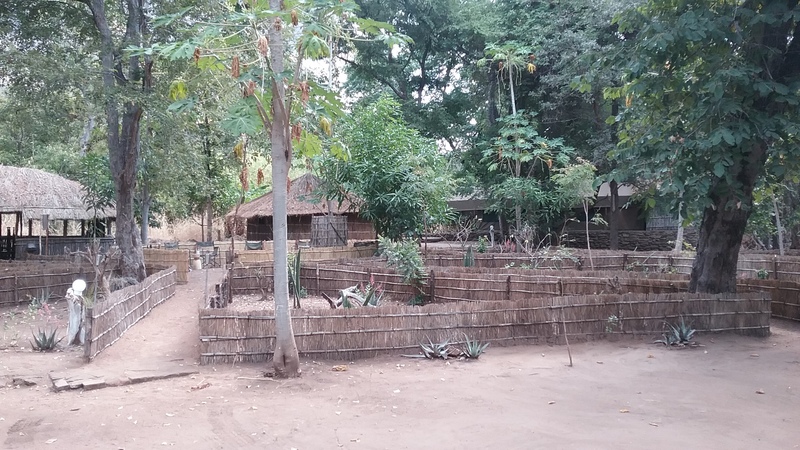 And they put me in a different tent (look familiar Wayne?) 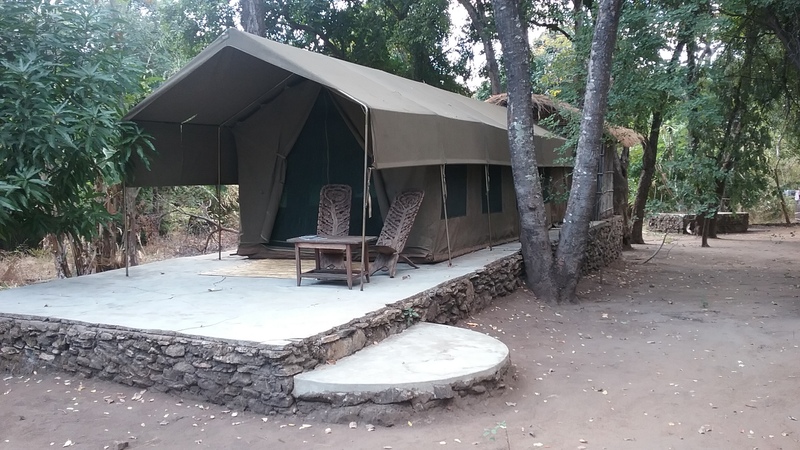 July 24th, Sunday morning. Finally, the start of my hunt. Like I mentioned earlier, Simon’s concession is 690,000 acres, and he basically only hunts the southeast corner of it. Simon employs 15 or so young men from the local village to keep his two track “roads” open. Many of the roads that we had driven on several times a day last year were now completely grown over with high grass and other vegetation.

Simon’s method of hunting is mostly driving these roads to spot the Sable or other animals, then to get off the bakke and stalk in for a shot. The problem this year was that they had a very wet spring which made very thick and high grass that resulted in it being very hard to spot the animals, and much of the grass is still very green. We were able to spot Sable every day, but not in the numbers that we saw last year.

As I was the first hunter in Simon’s camp this year, they basically didn’t have any camp meat. So my first day hunting, we found the last dumb Duiker on Simon’s concession. Most of the time, when you see a Duiker, it is in high gear, heading for the next zip code. But this Duiker just stood there, maybe thinking we didn’t see him. He provided some very welcome and good eating for both us and the camp staff.

That night we feasted on Duiker fillets that Simon cooked on the BBQ. 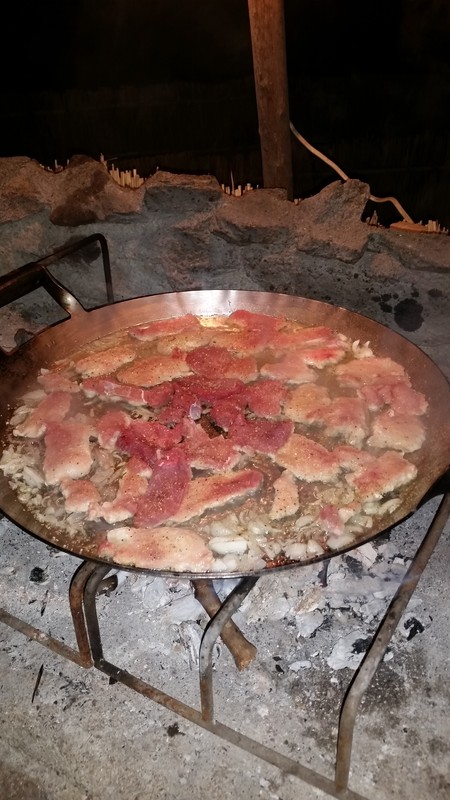 Monday morning. Again we’re up at 5:00 AM and leave camp by 5:30. We see Sable, but not the grandpa that I came for. On the way back to camp about mid-day, we came across some Warthogs, and although none have trophy tusks, I put one down to increase our camp larder. 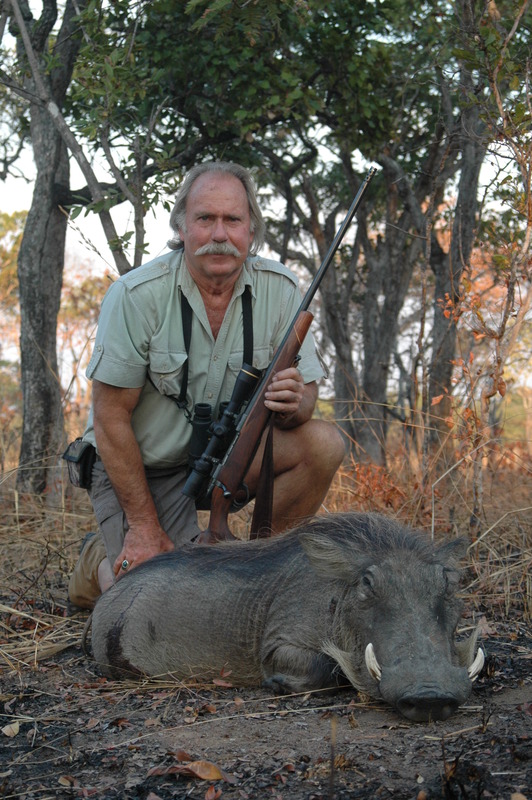 I think I maxed out my time. It won't let me post anything more.
I'll continue tomorrow...

so far so good

Keep it coming! I need to add a trip like this to my itinerary in the future
John 3:16

We continued this plan each day, putting many miles on the bakke, seeing a few Sable, but no mature bulls, let alone Grandpa. By Friday morning I only had two days left to hunt. Simon then told me that his next hunter was coming primarily for Leopard, and he said I could stay two additional weeks if I wanted to.

Simon’s camp is very remote, but they found a place on top of a rocky hill about 15 minutes from camp where most of the time they can get cell phone service. So that evening we go to signal hill, I make a couple of calls home, and make arrangements there so I can stay in Mozambique an additional two weeks. Simon’s wife is a travel agent in South Africa, and she graciously agrees to call Shawn at Gracy Travel back home to change my airline flights. Everything worked out, and I now will stay an additional 13 days looking for my Sable.

July 30th. The originally scheduled last day of my hunt. Like every previous day, we drive a lot of miles looking for Sable and seeing a lot of high, thick grass. We drove the length of a long meadow or “flay”, and where we stopped to turn around there was a faint game trail. Tomei, the head tracker, got off the bakke to look at the trail, and almost immediately said that a Sable in a poacher’s snare had recently walked down that trail.

We got off the bakke to follow the track. We followed it for about ½-3/4 miles and there was a 1 ½ year old Sable limping away from us. Simon asked me to put him down, and a quick “Texas Heart Shot” dropped him. His left front leg was in a 23 pound poacher’s Gin trap. The trap was made from the leaf springs of a vehicle. It had completely broken the young bull leg bone, and his right front leg was bleeding from being hit by the trap as he tried to walk. 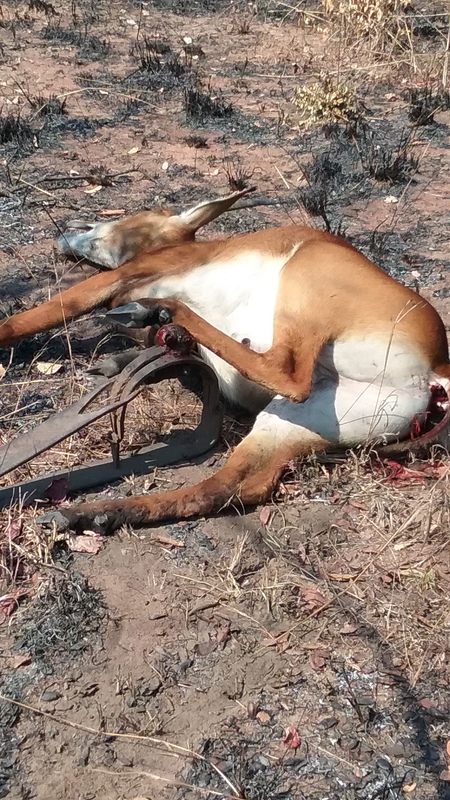 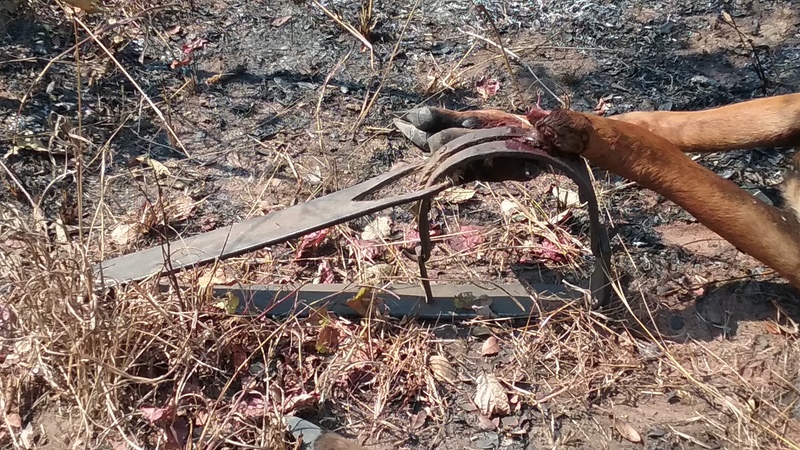 We put the young bull out of his misery, took one poacher’s gin trap out of commission, and we filled the camp freezer with delicious Sable meat. We had wonderful Sable fillets for dinner that night.

The next day Tiaan would drive to Lichinga to pick up the new hunter, and it would be the first day of the extension of my hunt.

You guys sure upped the transport with that three wheeler.

It is pitiful to see a gin trap in action. Glad you put it down.

seems like you will need a 2 week extension to finish this story Good stuff- sticking with it to the end.

I envy a man that can make a few quick phone calls and add 14 days to his hunt! I hope to be in that position in a few years.

Nice to be able to add the extra days. Gin trap is bad news. Bruce
S

Kurt, just had Sable somoosas!! In Lichinga for the night.

TMS said:
Kurt, just had Sable somoosas!! In Lichinga for the night.
Click to expand...

Have you added any steel to that bridge?
You must log in or register to reply here.