Last year I went on a great Leopard hunt in Mozambique with Simon Leach of Traditional Mozambique Safaris (TMS). It was booked as a 2 week hunt for Leopard with the option to shoot a Roosevelt Sable and a few other plains game animals for their trophy fees. I had booked a few extra days “just in case I might need them” for the Leopard.

As it turned out, I shot my Leopard on the second night, and I ended up spending the next 2 weeks hunting for a “monster” Sable. 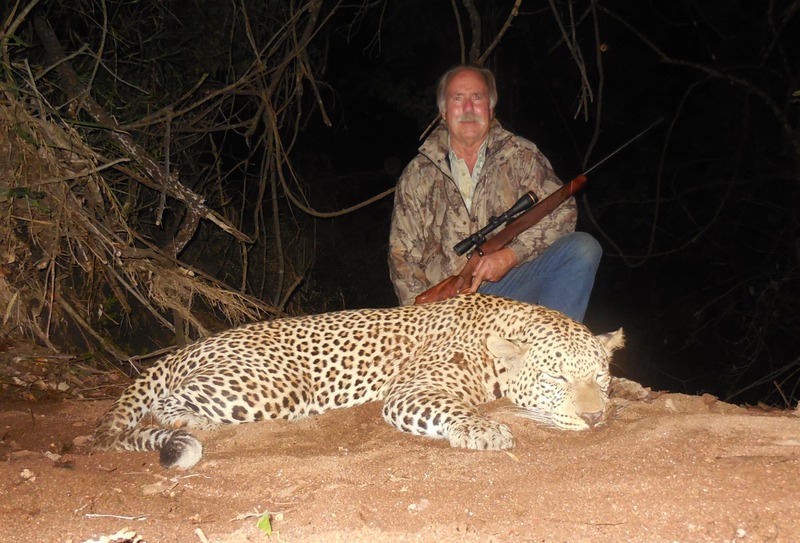 I shared the first week of that hunt with AH’s own Super Moderator, Brickburn, who was attempting to shoot a Sable with his bow. The Sable didn’t cooperate, and a couple of days before the end of Wayne’s hunt, he borrowed my custom .300 Weatherby and shot a beautiful Roosevelt Sable bull.

A day or two after Wayne and Simon left camp, my PH, Martin Snyman, and I stalked a herd of Sable that had a truly “monster” bull in it. We stalked to within about 100 yards of the moving herd, but about the time the herd stopped, a troop of baboons that were behind us and on the other side of the bakke began screeching holy hell.

The herd bull moved through the herd and stopped broadside to us, but with his chest behind a tree. All that I could see was the front of his chest, his neck, his head, and a huge set of horns that curved back on the other side of the tree trunk, and down toward his back. As Martin set up the shooting sticks he whispered “He’s a monster!”

I have a 39” Sable mounted in my Trophy Room that I killed on a ranch hunt in South Africa in 2012. I look at that Sable several times every day, and although his horns curve back and down, he is a “junior” compared to the bull standing in front of Martin and me. 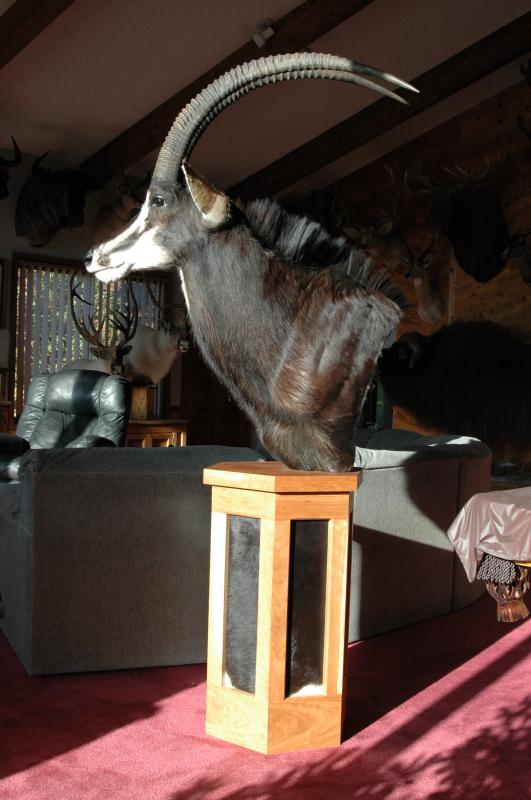 So I had already seen that the bull in front of us was a monster, and Martin’s words only helped to give me the first case of “shakes” that I have had in 50 years of big game hunting.


Although I had only had my .300 Weatherby for 6 years, it had become my favorite rifle. I bought it in 2009 and I re-stocked it myself in Fancy walnut that I hand checkered with my favorite multi-panel, wrap around pattern. I dry fire it often at home, and I shoot half a box of ammo through it almost every week at the range at targets from 100 to 430 yards. I have shot many sub-moa groups with it with several brands and weights of bullets, so I have complete confidence in it.

I did not think that I had any more than about an inch of vital chest area of that Sable bull sticking out in front of the tree, and I was shaking so hard that I could barely keep my crosshairs on the entire bull, let alone hold steady enough for a fatal shot. So while I was trying to calm down and was waiting for a clear shot, the baboons continued to yell and screech, and the monster bull and the rest of the herd of Sable got tired of that game, and turned and ran away.

Martin and I then spent from daylight to dark every remaining day of my hunt looking for that bull, but to no avail.

Back at home, I got a few emails from Simon saying that he had seen that monster Sable bull on subsequent hunts, but that no one had killed him. I couldn’t get that Sable bull out of my head, so last winter I contacted Simon and asked him if I could come back to his camp for another try at that bull. I thought that my best chance for that bull would be to be the first hunter in Simon’s camp this year, so I booked that slot.


Simon’s concession is 690,000 acres of totally wild Mozambique in the Niassa Province that is about a 6 hour drive from the nearest commercial airport at Lichinga. Simon and his apprentice PH’s had previously driven the camp supplies up from South Africa, then returned home, so I coordinated with him so that we would be driving into camp together.

I have family in Denver, so I drove there from my home in Montana to spend some time with them, and then begin my flights to Mozambique from there. Shawn at Gracy Travel made my flight arrangements. My flight from Denver to Atlanta went smoothly, but the plane out of Atlanta was delayed over an hour which made my Joberg to Maputo connection tight.

I had checked my bags straight through from Denver to Maputo so that I wouldn’t have to hassle with a South Africa gun permit in Joberg. When I got off the plane in Joberg, an agent from Gracy Travel met me with my Maputo boarding pass, and I had just enough time to quickly walk across the OR Tambo airport to the Maputo gate, where they were boarding when I arrived.

I was on the last flight into Maputo, and Simon was there waiting for me. After I cleared Customs I went to collect my luggage, and only my rifle case was there. My bag with my cloths and bullets had not made the transfer in Joberg. There was a group of 6 other passengers on those two flights that also didn’t get their luggage, so I was somewhat relieved that it wasn’t just my bag that didn’t make it.

So Simon and I got a cab which took us to the VIP Grand Hotel where we checked in. We were scheduled to fly out of Maputo to Lichinga at 7:00 AM the next morning, so at 5:30 the next morning, we packed up what luggage we had and caught a cab back to the airport. The LAM flight office didn’t know where my missing bag was, so we canceled our flight for that day, and because there was no flight to Lichinga the next day, we booked a flight for the following day.

This meant that we would have to spend two additional nights in Maputo, and that my 7 day hunt was just cut back to 5 days.


So Simon and I returned to the VIP Grand Hotel where we booked two more nights, and we set out to enjoy the beautiful (??????) city of Maputo.

Thanks for sharing..look forward to more!
John 3:16

You needed to switch over to that time zone anyway right. Doing it in Maputo. Yee ha!

Kurt, I love that rifle. Your confidence in it was apparent and it transferred straight to my shot.

Looking forward to the rest of the story...

Great start to your report! Looking forward to hearing how it goes...

I really like that sable pedestal mount you have- my wife shot a sable this summer and we plan to get it mounted essentially the same way. Can't wait to see the final product.

Can't wait to read the rest of this story. Already an adventure!!

Great report. Can't wait for the rest of the story!

Love the tale so far. Bad luck on the bags. Hope its all good from there on..... Bruce

Looking forward to the rest of the report.
And here I am, returning to Africa of many faces;.... the sloe-eyed temptress with flowers in her hair who stole my youth and my heart, and left me an old man with a kaleidoscope of conflicting memories of many dashed hopes and some fulfilled dreams. E. Echols

Been waiting for this one!
HUNTERS make importation bans work!

Excellent. Love your cat.
Tommorow is promised to no one. Go live your dreams.

I'm thinking we should make a rule, that if you are going to be hunting a remote area, you can't drop a teaser like "monster sable" and leave the service area leaving the rest of us wanting more!
"A man and a gun and a star and a beast are still ponderable in a world of imponderables." Robert C Ruark

Nice head on that cat! Excited to see the monster sable!

Kurt if your damn computer blew up again I am going to drive down to your place and take you to the store for a new one.

rinehart0050 said:
Great start to your report! Looking forward to hearing how it goes...

I really like that sable pedestal mount you have- my wife shot a sable this summer and we plan to get it mounted essentially the same way. Can't wait to see the final product.
Click to expand...

@rinehart0050, Thanks for your comment.
That Sable pedestal is one of several that I made from cherry wood, and I used pieces of my Sable's back skin in the panels.

BRICKBURN said:
Kurt if your damn computer blew up again I am going to drive down to your place and take you to the store for a new one.
Click to expand...

Wayne, my computed didn't blow up, its just that my computer's operator has a bad case of CRS disease (Can't Remember Sh*t). Yesterday I had to make a special trip to the Verizon store in town for them to show me (again) how to transfer photos from my phone to my computer.
You must log in or register to reply here.