Will be using Speer 235gr Semi Spitz SP and have RL15 and Vit N140. Which would be the better powder to use and why?

Rifle is BRNO zkk 602. Anything I should be aware of regards C.O.L or seat bullet just off the lands?

Excuse ignorance but first time loading for this calibre.

All answers on a postcard please.

Sorry don't know what a "postcard" is except the physical kind so I'll answer here.

I was disappointed when trying to get the Speer 235 gr bullet to shoot accurately. I tried it in 4 different rifles, ( Ruger M77 Safari, Sako Kodiak, Sako AV, Sako AIV) using different loads of RL 15, IMR 3031, IMR 4064, H4895, even some plinker loads with H 4198 - and gave up. Perhaps your N140 will work for you but I doubt it. I will now only use them for offhand practise. They are nice bullets for that because of the low recoil and 3" 100 yd group potential doesn't matter much when shooting offhand.

Sorry about the postcard bit, Japie humour crossed with being married to a Pom maybe.

Interesting about your experience with Speers, they are all I have at the moment so will use them and report back.

Ideally I am after some Woodleigh ppsp.
R

Back in the day, the 235 Speer was the only cheap bullet available that was less than 270 grains, and loading data turned out to be similar to the 250 grain Bitterroots, so the 235 Speer was the bullet of choice for load development and practice. When Sierra introduced the 250 gr SBT I found them to be more accurate and have better terminal performance than the Speer, so stopped loading the Speer, switching to the Sierra. To answer your question, I used IMR 4064 for 375 H&H loads since neither Rl15 nor Vi N140 were then available, so don't know how they compare.

This is my experience with the Speer 235. I never tried any powder other than CFE223 with it. 8 rounds with 1 grain difference each round at 100 meters. This load is from the Hodgdon website.
Good luck! 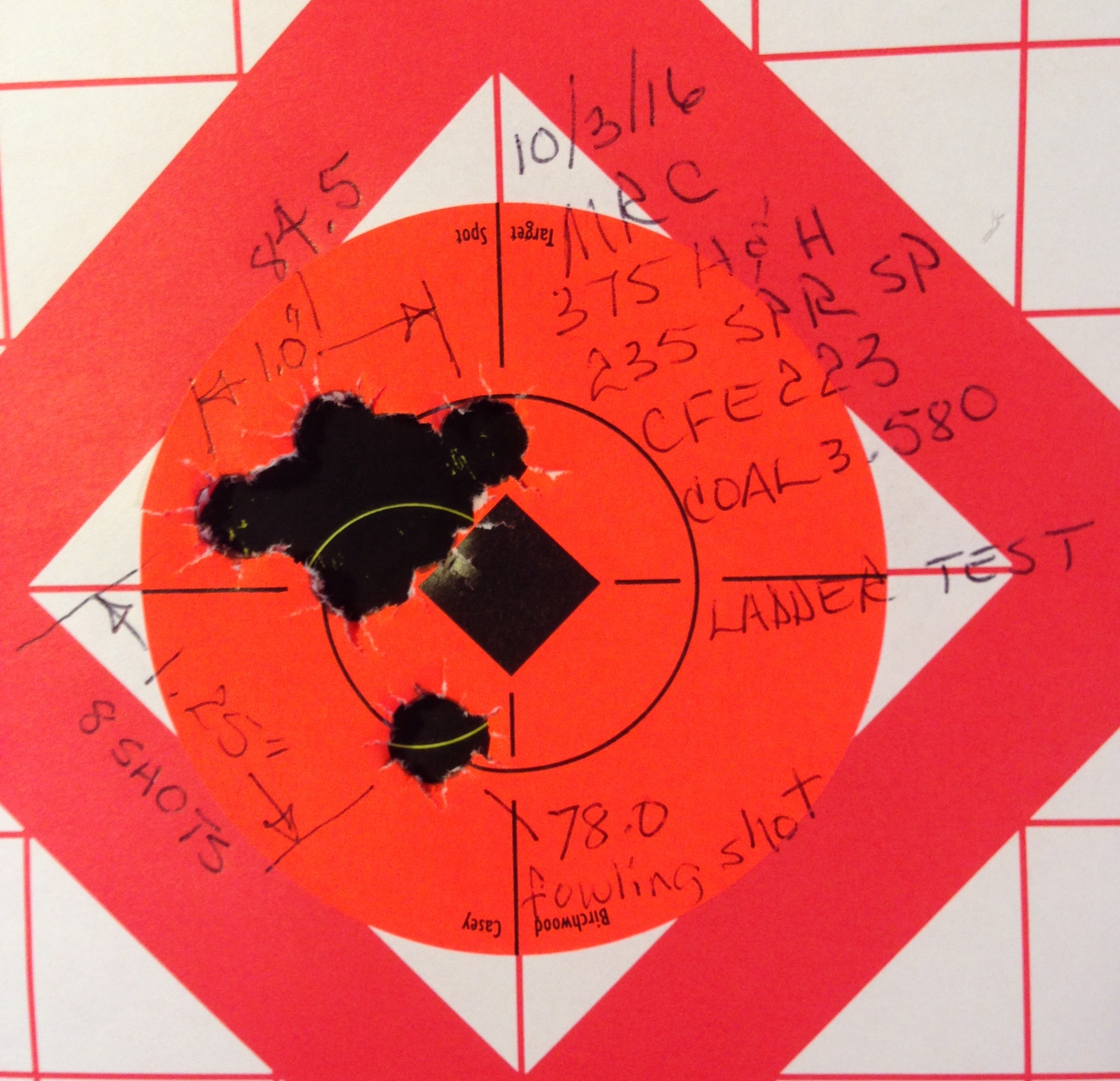 Wow that looks good! Much better than my results.

Ridgewalker said:
This is my experience with the Speer 235. I never tried any powder other than CFE223 with it. 8 rounds with 1 grain difference each round at 100 meters. This load is from the Hodgdon website.
Good luck!

Nice. The problem with that is that Hodgdon powders will no longer be available in the UK. Apparently all users of American powders are going to die of horrible carcinogen caused deaths.

I have been trying to get a C.O.L and have seated a bullet. Without going back out to measure it again it is well short [3.49 something] but the bolt will not close. Have not forced it. The dummy round is using brass fired in this rifle. Tried another dummy round I was given and same with bolt. Tried with brand new Kynoch brass and bolt feels the same. Empty chamber and bolt closes as normal.

Help please. What am I doing wrong?

I think that it is because I fed round direct into chamber as rifle is controlled feed.

Do your "dummy" rounds work if you put them into the magazine and load from there? Trying to feed rounds directly into the chamber of a controlled feed rifle simply doesn't work. Good thing you didn't try to force it.

Works with some does not with others. Much to do with how the extractor is fitted or modified. Agree do not force!

That is what the problem was. Rule number one: Think.

Stinky Pete said:
I think that it is because I fed round direct into chamber as rifle is controlled feed.
Click to expand...

Yes, that can be bad depending on the rifle. M70's are supposed to be okay with it and I have done it my mine. Regardless I don't normally do.

If you feed out of the magazine and you're still having problems, then I'd say your COL is too long for your rifle. Each rifle is a system to it's own and so what works in one rifle won't necessarily in yours.

An old and simple trick.
1. Take a spent piece of brass where the bullet your loading will fall right into the brass if you let it. Press the end of the neck a bit against a table to create a flat spot.

2. Seat a bullet now into this piece of brass a bit longer, maybe 0.1", than what you're currently seating. This may be too long, but I'll address that.

3. With a lit match, soot up the bullet or alternatively use a black marker. Measure the COL and note it.

4. Put the round in the magazine if you can. If you can't then at least push the back end of the brass down into the magazine and push the bolt forward allowing the round to come up between the extractor and bolt face as normal and close the bolt fully. If the bullet as expected is seated a bit too long, it will get pushed up against the rifling and subsequently the brass will be pushed up the bullet.

5. Now extract the round slowly. As you do so the rifling may "grab" the bullet enough to pull the bullet a bit out of the brass. This is the purpose of the soot on the bullet.

6. Carefully inspect the bullet for a clean spot where the flat spot scraped off the soot as it was pushed up the bullet when the bullet was stopped against the rifling.

7. If you see a clean spot, then slowly seat the bullet up to the front edge of this clean spot and measure the COL. This is your maximum COL for your rifle with this bullet. Normally most folks will back off of this measurement by 0.02" minimum. Frequently even after backing off by this amount, you'll be limited by your magazine length and that will essentially become your maximum COL. However depending on the bullet and rifle, your max COL is less than what your magazine will allow.

8. If you don't see a clean spot at step 7, it would mean that the rifle didn't grab the bullet on extraction. Measure the COL before you do anything else and compare to what you measured at step 3. The COL should be less than what it was at step 3. Now you can pull the bullet a bit to find that clean spot which should show almost immediately.

It may take a couple of times thru this process for this to sink in, but it's really not that difficult to get what you're doing.

Once you're confident in what you're doing, repeat the process 3-4 times noting your measurements each time. You should come up with pretty close numbers each time. If you're getting significantly different measurements, then something has gone awry, but that's never happened to me. It's been awhile since I've done this, but it seems like my shortest/longest measurements were normally with 0.002" of each other.

Stinky Pete, you might find a cross reference chart that you could then use our loads (backing off some) and work up a load. Don’t the powder companies you can get have load recommendations?
Here’s a place that compares US to SA Somchem Powders as an example.
https://www.peregrinemonolithics.com/wp-content/uploads/2015/07/Relative-Quickness-Chart.pdf

Africa on my mind.
G