Sometimes, life surprises us, and a childhood dream all of a sudden comes true. This is what happened to Pascal – originally from Bordeaux – who became a landowner in Andalusia, in the Sierra Morena, on the edge of Hornachuelos Nature Reserve.​

After leaving Madrid in heavy snow, we drive towards Cordoba, one of the most important Andalusian cities, and well worth a detour (see box). Night has already fallen when we pass through the village of Villaviciosa de Cordoba, follow a country road for about 9 miles, and finally reach a large entrance gate. There, a sign unmistakably informs us that we’ve reached our journey’s end: “Private hunting grounds!”

It’s already late, but for Spaniards just the right time for dinner, and we can’t resist the tantalizing fragrances coming from the kitchen, where the caretaker’s wife is cooking. Both he and she come from the village and live on this estate year-round, guarding it like a family treasure. We are in the heart of the Sierra Morena, but Pascal does not forget his roots and offers us a delicious Pineau des Charentes, vintage 1973. We will sleep well… 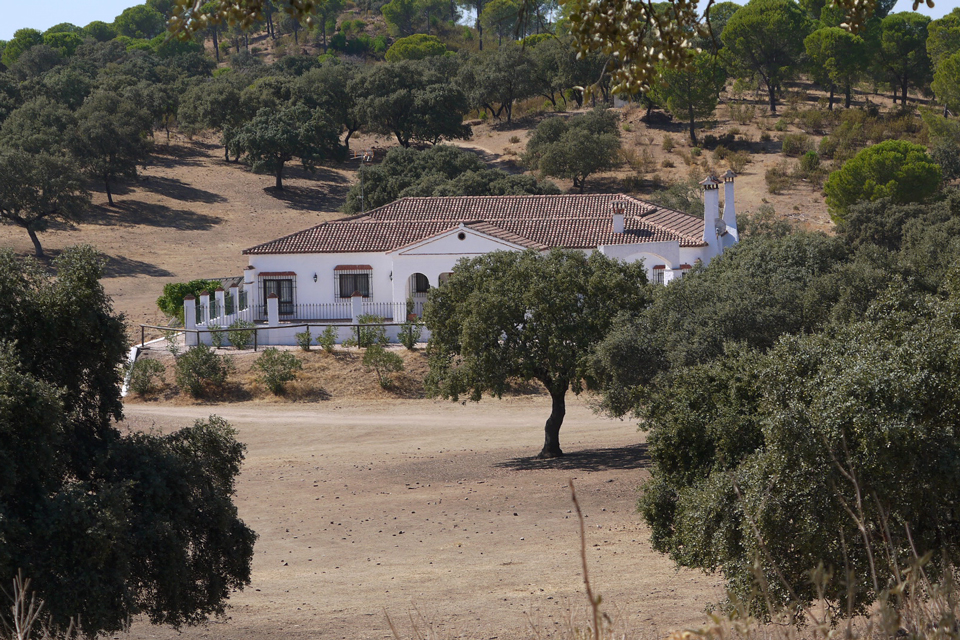 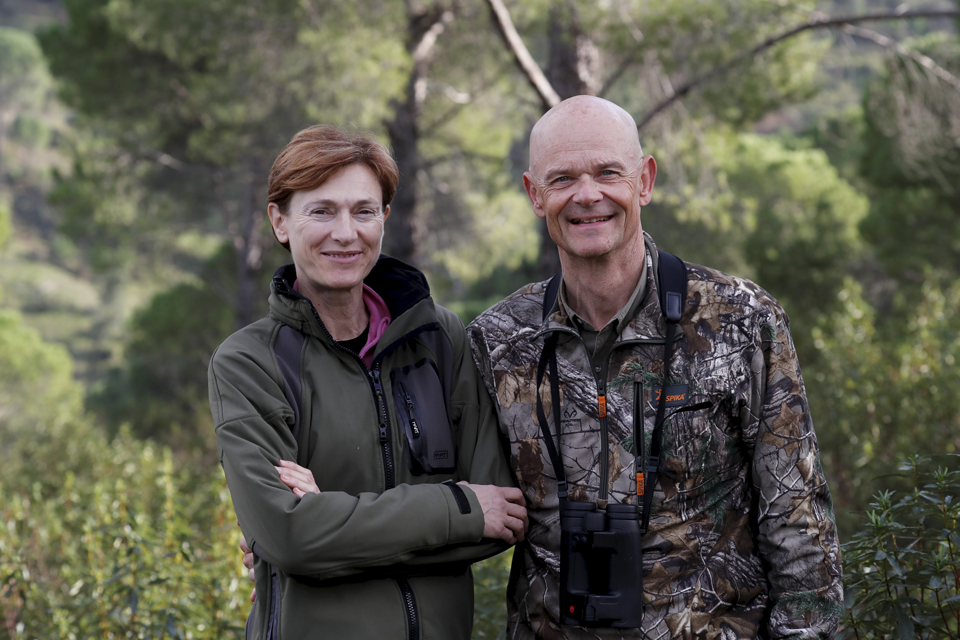 Early in the morning, the roughly 1480 acres are still in darkness and hoarfrost covers the sparse ground cover. The winter brought little rain, but this does not seem to affect the numerous pines and oaks – to our great astonishment. Pascal explains to us that the subsoil of Palomas is fed by groundwater, to which the numerous old wells in the area testify. But where does the name Las Palomas come from, which is also given to a small blue bird whose wings make a clicking sound? We will find the answer later when we leave the hacienda. As morning breaks, we discover a ruin on a hill whose columns would be worthy of the Acropolis. Pascal explains to us that it is an old pigeon tower, which served as the “base” for the carrier pigeons of the Spanish army during the Civil War. From up here, we enjoy a panoramic view of the estate, which includes both very rugged mountains as well as gentler, flat terrain. Behind the finca, breathtaking gorges cut through high plateaus. Gorges at the bottom of which there are streams, partly fed by groundwater. This promises both physical exertion and game, with hunters focusing on the less steep terrain. The tracks of deer, fallow deer, mouflon, and wild boar leave no doubt! 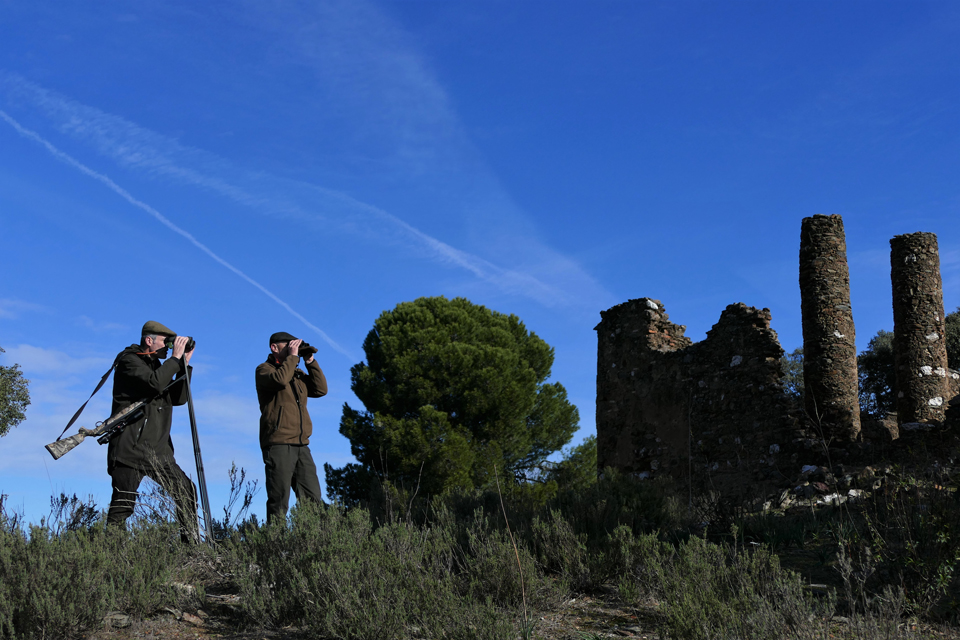 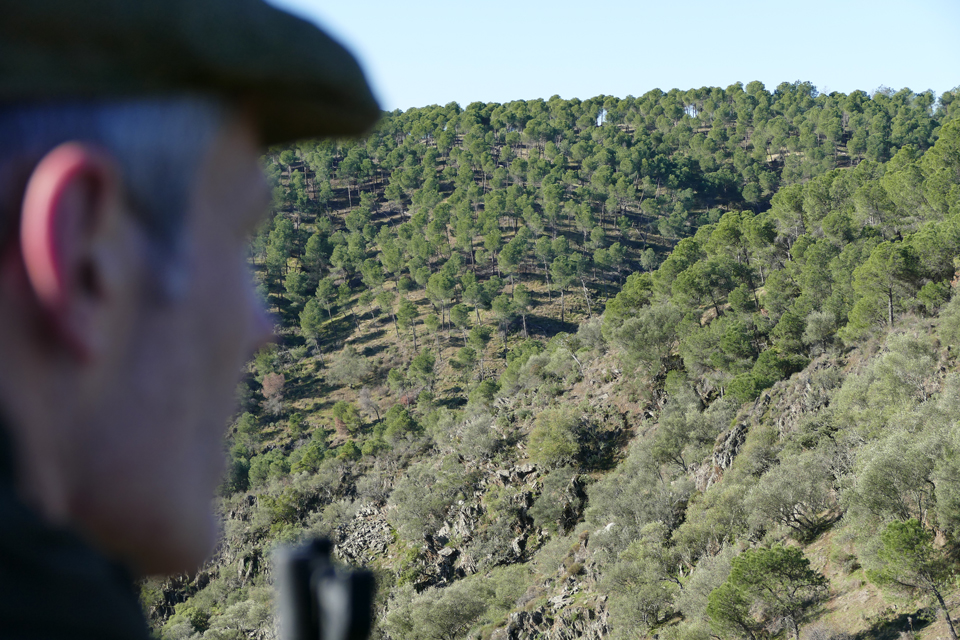 Pascal loves both stalking and raised-hide hunting. Two hunting methods that he can practice on his grounds and also offer to hunting guests. Shooting stick in one hand, binoculars in the other, we move forward on tiptoe, through pines, oaks, and a carpet of rock roses decorating the undergrowth. This vegetation is unfamiliar to us and several times we see some game, but only for very brief moments. A magnificent boar, who apparently lingered only a few steps from the path, dashes off. We catch a good glimpse only by looking through our binoculars. We need to proceed slower still, and acclimatize our eyes to this Andalusian landscape. Again and again, we cross the well-maintained paths of the estate, but also see game tracks and sows with young. Time is fleeting and at 10 o’clock we have to return to the finca (estate), where an extremely lavish breakfast awaits us. 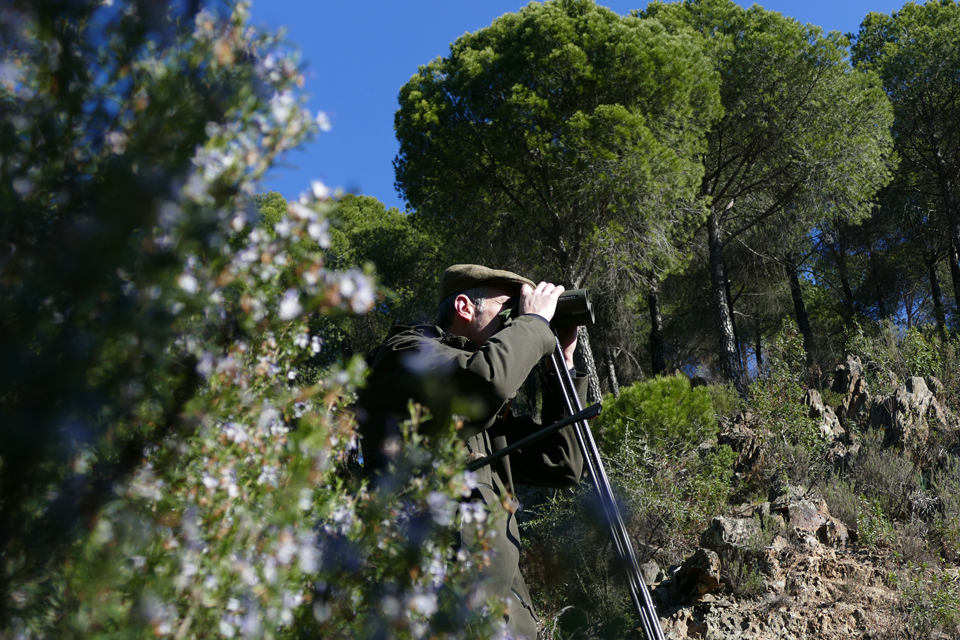 The word siesta comes from Spain, so it seems we have to follow this tradition. In the late afternoon, we return to the hunt. This time, Pascal takes us by car to the farthest corner from the finca, at the other end of the hunting grounds. On the way, he shows us some of the hides he built, most of them located near watering holes. A few handfuls of corn lie in the feeders, whose grids keep deer away, but let wild boar feast. Although Pascal tells us that local boars do not develop significant body mass, we do get to see some respectable specimens. Now we continue on foot, through deep canyons with inaccessible steep slopes. Nevertheless, we manage to gain some altitude. All at once, a noise attracts our attention. On the other side of the valley, a pack of wild boars takes flight. We can’t see much at first, but then make out a boar bringing up the rear; he is exactly what we expected. Black and reddish-brown silhouettes disappear in the undergrowth. Sometimes, small clearings in the thicket allow us a glimpse, giving us insight into their movements. The boar is still at the rear. We mount the scope on the carabiner and laboriously track the boar. All of a sudden, the pack pauses in a clearing. We are at an overhang, the telemeter indicates 183 meters and a sight correction of nine centimeters. The boar we had been tracking is hidden by vegetation, but another stands out from the pack lingering close to the lead sow. It is our only chance, any further shot would be left to chance. The shot rings out and the boar immediately goes down. It is dead. Everything happened within a few seconds, and we still can’t believe it. After a half hour’s walk, we finally reach the spot. The bullet entered above the shoulder and exited at the opposite shoulder after penetrating vital organs. The boar did not suffer. The same does not apply to us… At last, we have recovered the boar, which will be made into Estofado de jabalí and other culinary specialties. 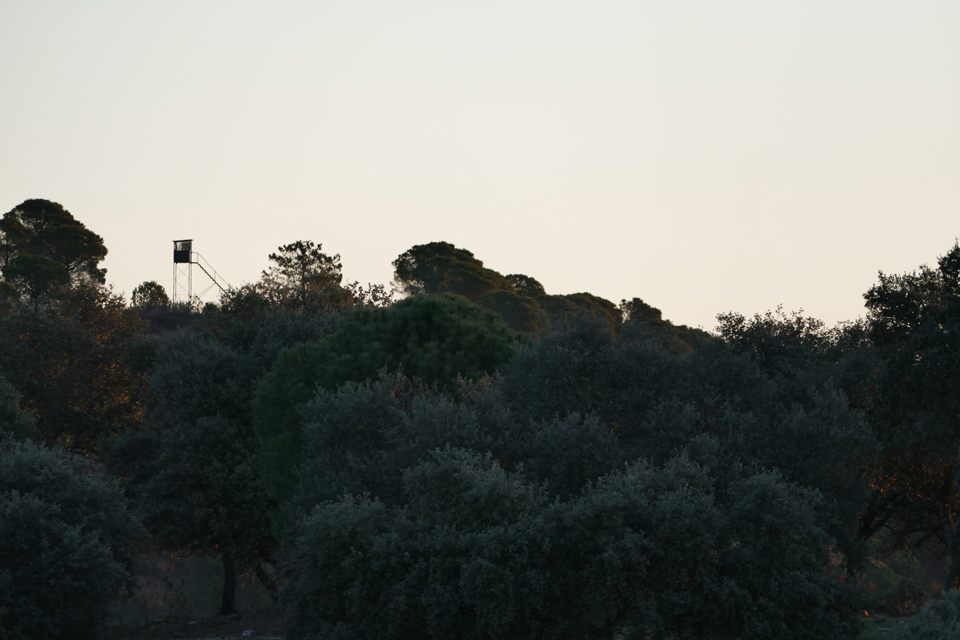 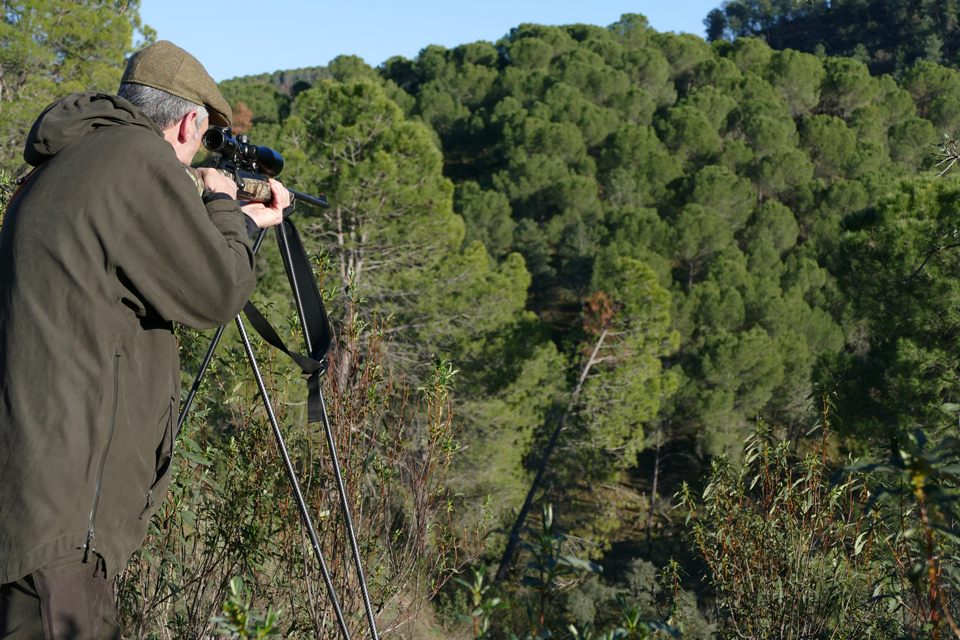 The day is not over yet. But before going to the hide, we need to pack warm clothes – the evenings are still quite cold. The first stars are twinkling in the sky as we approach the hide in absolute silence. A sudden crackling draws our attention. Wild boars are approaching, unaware of us. As the lead sow breaks out of the thicket, the wind shifts, and the black boars disappear in a flash – followed by four brown, equally fast sows. The carabiner is shouldered, but the shot misses, due to the scope’s high magnification. Then another animal breaks from the thicket, and this time, thanks to minimal magnification and illuminated dot sight, it goes down. What a masterful ending to our Andalusian stalking with a French touch!

The Art Of Hunting The Bengal Bush Boar: A Comprehensive Guide
2

A July Evening In The Wheat Field