The Indian Lynx, Felis Caracal, in Hindi is called Siagosh, they are very rare and shy, like Cheetah it is used to be trained to show its prowess in hunting small deer, gazelle, hares, foxes, and mainly to hunt birds. In times gone by during the heydays of hunting in India, the Lynx was used for hunting as was the Cheetah and the Leopard. In India at the time of the Maharajas these three beautiful wildcats were tamed and chained to assist their human masters on hunting trips. 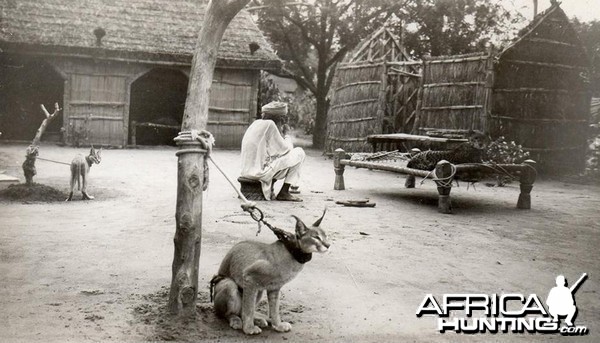 Two Lynx and a Cheetah

Here is a painting by Marianne North of a street scene at a place called Alwar in Rajasthan in India. The time is 1878, the painting shows the Cheetah and Lynx at their keepers' home in 1900 from the state of Jaipur. 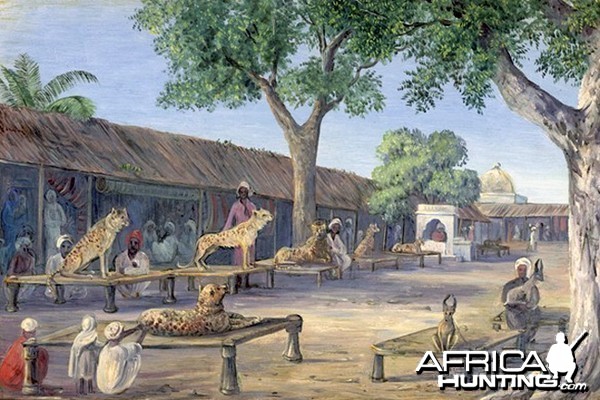 To train them to attack and hunt, the keeper would put a piece of meat on the end of the bamboo cane and hold it up as high as he could, and one of the Lynx would make a prodigious spring from the ground to the top of it, taking the meat, and comes down again in an instant. Their ears stick up right over their heads and meet at the top. Like Cheetahs , Lynx too were taken out in carts blindfolded and were let out when within sight of the hares, small deer, when they use to creep up and spring upon them, holding them till the hunter comes up and kills animal caught. They are so intent on their work that they are easily blindfolded and led away again to the cart.

The Lynx were chained to rope cots (beds) or wooden poles in front of the houses down the street, their keepers sitting or sleeping behind them, and little children, peacocks, cocks and hens, wandering among them without the slightest fear.

The technique of killing prey practiced by the Lynx is to protect themselves from attack by placing their arms around their necks in a certain way that protects both the back of the neck and the throat. It is not surprising that the Lynx was used for hunting.

Training Lynx to hunt was similar to the training routine of Cheetahs, but Lynx being very restless animals took little time for subjugation
Caracal or Lynx this lesser known cat was also used to hunt smaller mammals and feathered game by few Royals in India.